One of the first things I wanted to see when I got to Berlin was the Wall of Berlin. I had heard about the brutalities that had occurred there since I was a little girl and I wondered how such a wall could even exist. How does the line finally get drawn in the sand, or in this case dirt?  What is it that makes that final straw for a divider to be put up between people? I saw my first glimpse of the Berlin Wall Memorial stepping out of my cab upon arrival at the Westin in Berlin.  Yes, the Westin, they bought a piece of the wall to place in front of their hotel door!

They have slabs of this wall everywhere in Berlin and there was a big chunk of it right out in front, almost proudly displayed. In fact, The Berlin Wall Memorial is the #1 tourist attraction in all of Berlin with an estimated 800,000 to 1 million tourists visit annually. It is almost as if it is a piece of Berlin tourism.

It was a blisteringly cold day when I visited the portion of the wall that still stands, the section without the murals.  It was concrete that was old, rough and gray, thin even, with pieces of rusted metal sticking out of it in places.  It was not what I was expecting of the Wall of Berlin.

“That was what the hoopla was all about?” I thought, but as I winded my way down the long, long path of this 12-foot wall, I began to realize the gravity of it. The Berlin Wall was not just a single, stand-alone concrete wall. It was two twelve-foot-tall barricades separated by a hundred-yard-wide no man’s land in a giant perimeter around West Berlin. In the no man’s land, known as the “Death Strip”, the East Germans had attack dogs, mines, and automatic machine guns to kill the Berlin wall-jumpers that the border troops in the watchtowers somehow missed. In the very special case of the East Side Gallery, the Death Strip ran between the Wall and the River Spree. From 1961-1989, around 5,000 people attempted to escape over that wall, with an estimated death toll of anywhere from 150- 600 people (exact numbers are unknown).

Can you imagine living on one side or the other back in 1961? or the day it fell in 1989? For me, going to Berlin was like going back to the Cold War and that the Wall of Berlin symbolizes: the “iron curtain” that separated Western Europe and the Eastern bloc during the  Cold War. Back in 1989 when it fell, there must have been such celebration along this wall, which surely had people chipping away at the wall and taking bits and pieces of it home with them.

Once the Wall of Berlin came down, Berlin was in a hurry to get rid of it. After unification, Berlin sent pieces of the Berlin Wall everywhere.  A few tons were fashioned into a sculpture by the Berlin artist Stück and then exhibited in Barcelona. Original panels were freighted to New York; one of them was a gift that remains on display in the United Nations’ Paley Park.  You can buy a piece of it for 10 euros in the souvenir shops. You find it everywhere, with murals painted on it, they display it like art in coffee shops and restaurants. Wikipedia even has a list of all the places they shipped it off to, where today you can find a piece of the Berlin Wall. As the city and the country went about the business of unification, tourists from all over the world began to arrive asking where the Berlin Wall was and its location.  Where was the line between the two sides? It was a long concrete wall, but it ran no more. Slowly, the city began to realize what it had taken down.

Most tourists want to know when coming to Berlin, especially those who are interested in the history and culture of a country: “Where can I find a Map of the Wall of Berlin? “Where was the Wall of Berlin?” “Which side are we on right now?” This map of the Berlin Wall creates a small island in the middle of east Berlin courtesy of My Destination (dot) com/Berlin (they even have a video of their favorite places around the wall), they are local Berlin experts. After reunification in 1990, the majority of the Wall of Berlin that had not already been chiseled away by souvenir hunters was removed. Today a few of the original sites remain.

While I was in Berlin, there were demonstrations of people wanting the Wall of Berlin not be destroyed any further, the protest at the Wall of Berlin was to block the removal of a stretch of wall to accommodate a luxury condominium project planned near the River Spree.  Oh, the irony of it all!  Luxury living on the Death Strip? Even for Berlin, that was a little much. The demonstrators think of it now as a symbol of hope, they never want to forget what happened here… the history of this nation. I had the chance to speak to one of the directors of a local museum.  She was the granddaughter of a Nazi German.  Even she has difficulty with the atrocities that her own family has done to others, saying that for her, “it boggles the mind and is a difficult history to live.”

The two sections of the Wall of Berlin left standing are only a few hundred yards: the Bernauer Straße in Prenzlauer Berg, which has since become the Berlin Wall Museum,

and the longer, more dramatic section of the Wall of Berlin lies along the Muehlenstraße on the River Spree, known as the East Side Gallery.

Some of the best-known paintings at the Wall of Berlin are the “The Mortal Kiss” of Erich Honecker and Leonid Brezhnev’s mouth-to-mouth embrace.  My God, Help Me to Survive This Deadly Love.

and Birgit Kinder’s Trabi (Trabant) knocking down the Wall of Berlin.

The paintings, which still reflect the bohemian atmosphere of Berlin today are a mixed bag of unusual surreal images,

The Wall of Berlin also has political statements:

The Wall of Berlin stretches from the Oberbaum Brücke to the Ostbahnhof. There is also an opening in the wall in this area where a section was removed. This break in the wall gives access to the River Spree walkway.

TRAVELER TIP:  The best city secret of NYC:  there is a piece of the Wall of Berlin in Paley Park

There is now a piece of the Wall of Berlin in Paley Park, an urban garden in midtown Manhattan, known for its soothing waterfall and locust trees. It is now home to New York’s only segment of the Berlin Wall. You can find it on 53rd Street between Fifth and Madison Avenues.

For more articles about the Berlin Wall and Berlin Graffiti:

For More articles about Berlin:

Swinging in a Ballhaus in Berlin

For More articles about Germany

Sounds From the Black Forest, Germany

“Wild on the Water” Carnival Raft Race in Schramberg, Germany 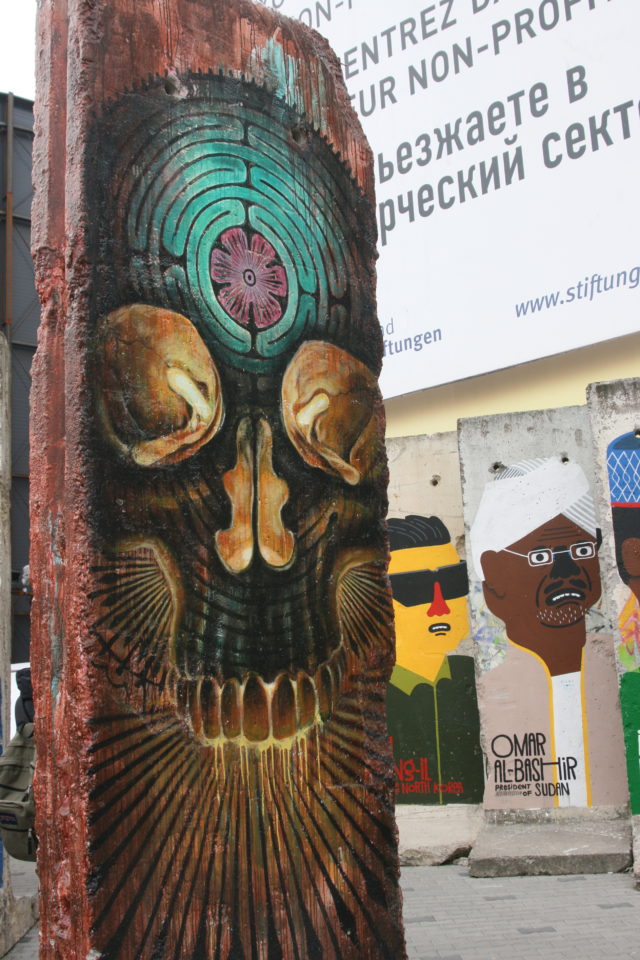