Edvard Munch ‘The Scream’ – Story Behind the Famous Art Piece

Edvard Munch is Norway’s most beloved artist. He is most famous for four versions of a composition created as both painting and pastel called The Scream (Norwegian: Skrik). He created these pieces of art between 1893 and 1910 on cardboard. Each piece features a hairless figure with an antagonizing expression standing on a bridge beneath a blazing orange sky.  Der Schrei der Natur (The Scream of Nature) is the title Munch gave to these works.

The National Gallery in Oslo, Norway holds one of two painted versions. The Munch Museum holds the other painted version and a pastel version. The fourth version, a pastel from 1895 was sold for $119,922,600 USD (or 74 million Euros) at Sotheby’s auction on May 2, 2012, to financier Leon Black, the highest price paid for a painting at auction at the time. It is the only version of The Scream to include a hand-painted frame on which the artist wrote a poem in neat hand-printed letters. It had a slight downward slant with the initials “EM” signed at the bottom:

“I was walking along the road with two friends,

The sun was setting – the sky turned blood-red.

And I felt a wave of sadness – I paused

tired to death –Above the blue-black Fjord

My friends walked on – I stayed

behind – quaking with angst – I

Although this poem is slightly different in a diary entry that was found from 1892:

I was walking along the road with two friends
– the sun was setting
– I felt a wave of sadness–
– the sky suddenly turned blood-red
I stopped, leaned against the fence
Tired to death– looked out over
The flaming clouds like blood and swords
–The blue-black fjord and city–
–My friends walked on– I stood
there quaking with angst– and I
felt as though a vast, endless
scream passed through nature. – Edvard Munch

Emotions Behind the Paintings – What is the scream screaming about?

These four pieces were originally a part of Munch’s Frieze of Life series, which often featured emotional themes such as love, death, and anxiety. The Scream, which shows anxiety and despair, was the final piece in the Love theme. Munch frequently speaks of his family and his personal struggle with mental health in his writings. His sister was actually hospitalized for insanity while Munch completed his first iteration of The Scream.

2013 marked the 150th anniversary of his birth. That year was dedicated to Munch’s life and work in Norway. As a part of this year-long celebration, Visit Norway (the Tourism Board) released a 30-second film entitled Scream. The goal was to honor Edvard Munch. If you are a fan of Munch, then 2013 was the year to plan a trip to Norway to enjoy the countrywide campaign promoting special exhibitions in Munch’s honor. If you want to find out about the exhibitions that were held throughout that year, visit Munch150.no for a list.  But if you missed that year to visit, then go now!

Things You May Not Know About the Scream:

Munch originally named The Scream: The Scream of Nature.

The Scream is FOUR pieces of ART, not ONE.

The Scream inspired the mask of Wes Craven’s Scream killer

Thefts of Edvard Munch, The Scream

The Scream has been the target of several thefts:

On August 22, 2004, two men who were armed with revolvers, yanked the art pieces off the walls. Despite an activated silent alarm, the two men evaded police. The paintings were hidden for a month on a tour bus. Two years later, three men were convicted of the theft and the paintings were recovered three months later. Each of the art pieces suffered only minor damage despite poor storage conditions.

Get Your Own Version of Edvard Munch’s Painting

You can purchase your own version of the Scream or get your child to draw their own version. I think this one looks great! Reader Dr. Selena Gray sent in her daughters drawing of “The Scream” to me when she heard I was going to Norway!  Her name is Azri Gray-Williamson, 6 years old of Houston, Texas: 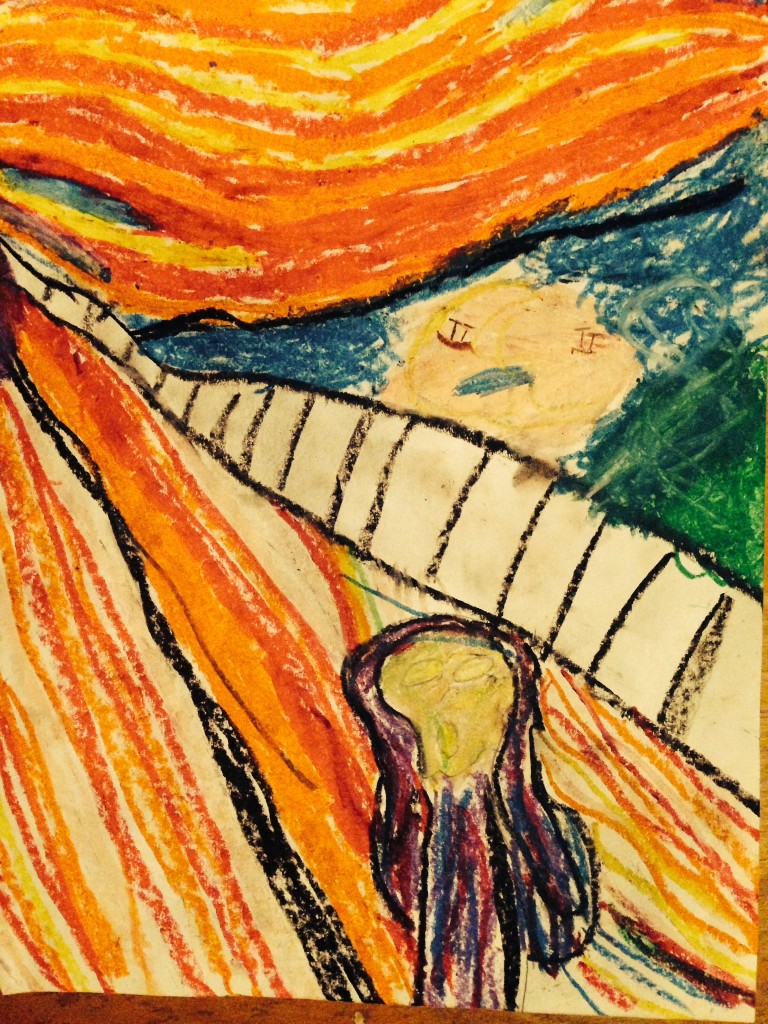 The Scream by Azri Gray-Williamson, 6 years old of Houston, Texas

Edvard Munch died on January 23, 1944, at the age of 80 years old of pneumonia complicated by cardiovascular disease.

You may also enjoy other articles about Norway:

How I climbed Preikestolen (Pulpit Rock)

16 Amazing Things To Do During a Norway Winter

Things to do in Norway: Spend a magical 48 Hours in Oslo

What to do in Oslo