The Palio – Tensions in the crowd grow wild as one by one the horses appear with their barebacked jockeys on the track and take to the line. The church has already blessed these horses and their riders prior to their arrival.  It is the peak of the social calendar, a horserace that completes 3 laps around the town center in Siena, Italy.

Contrade – Districts of Siena, Italy that was set up in the middle ages to send troops to the military companies that were hired to defend Siena against Florence. Each is named after an animal or symbol and each with its own long history and complicated set of heraldic and semi-mythological associations. 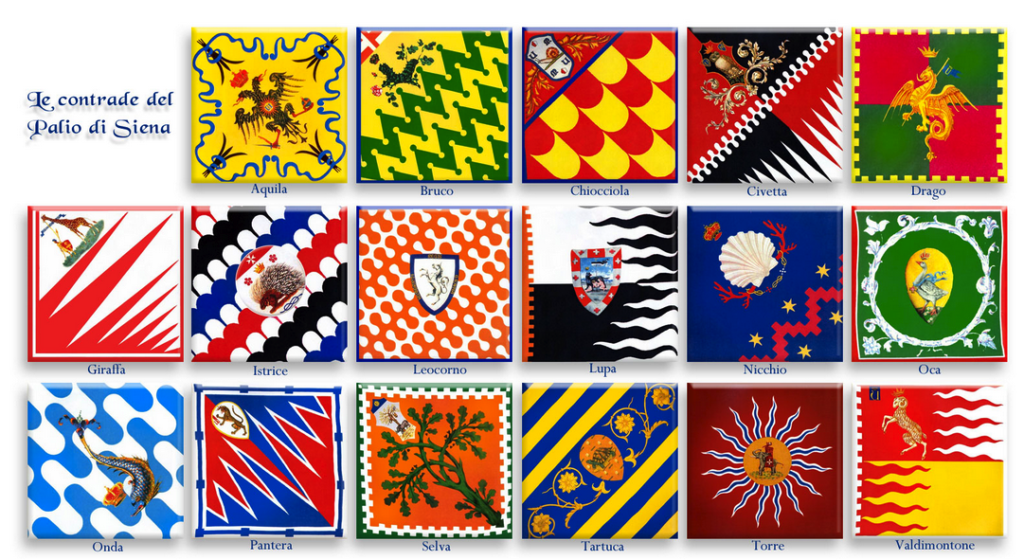 Before one of the most dangerous horse race in the world begins, the members of each contrade make their way around the streets of Siena to the Piazza del Campo, the city’s center track, in medieval costumes to star in this long-standing, traditional parade.

The Palio is getting ready to begin.

What does the Palio have to do with a contrade?

The Palio pits horses from the different contrade of Siena against each other. Fate is the number 1 protagonist since the horses are assigned through a lottery…and each of the jockeys wears the colors of the contrade for which they are riding. 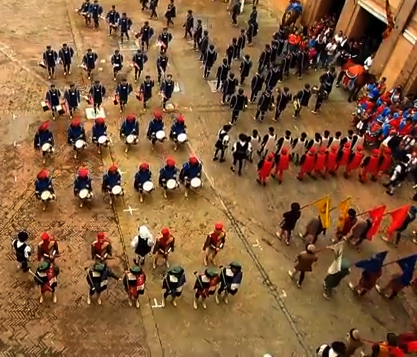 Parades of The Palio, *photo credit

There are usually one or two horses that are so hyped up from the crowds with excitement, that they can barely make it to the line before the ringing of the bell signals the start of this 90-second race and all craziness ensues. 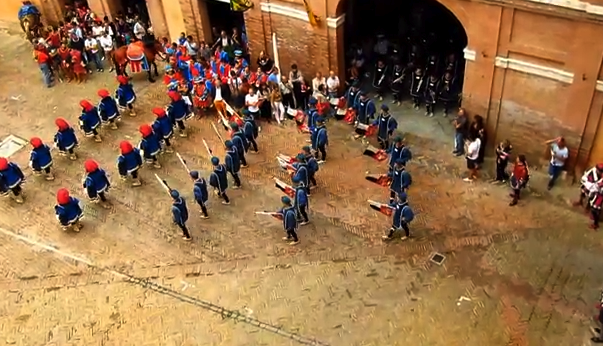 Parades of The Palio,*photo credit

It is the wildest, most passionate event that you will ever witness – people screaming, crying and some almost going out of their minds – so beware as a bystander, as it can get pretty scary if you are in the city center.

It is all a part of the tradition in Siena that has taken place for over 700 years. There are two races per year  (July 2nd and August 16th) with 10 of the 17 contrade horses participating in each event.

“What is the prize?”

Of which they reply:

“An embroidered BANNER of the Virgin Mary!” 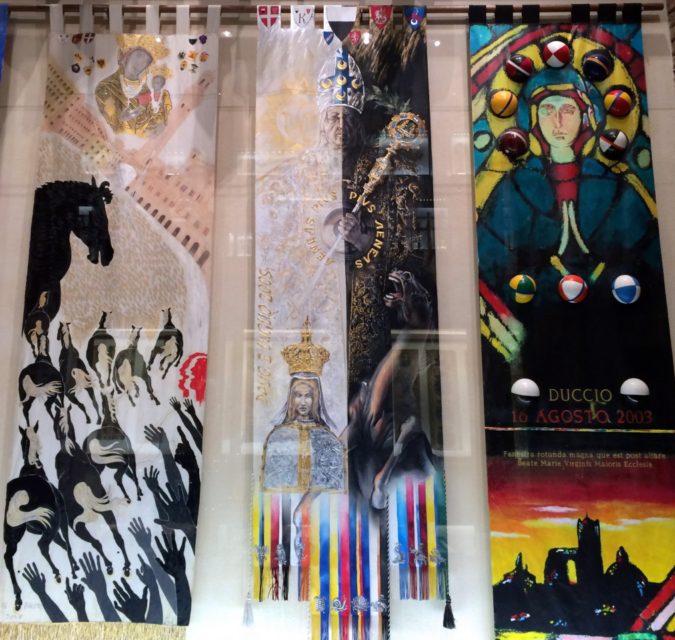 A few of the banners that the Noble Contrada del Bruco has won, Siena, Italy 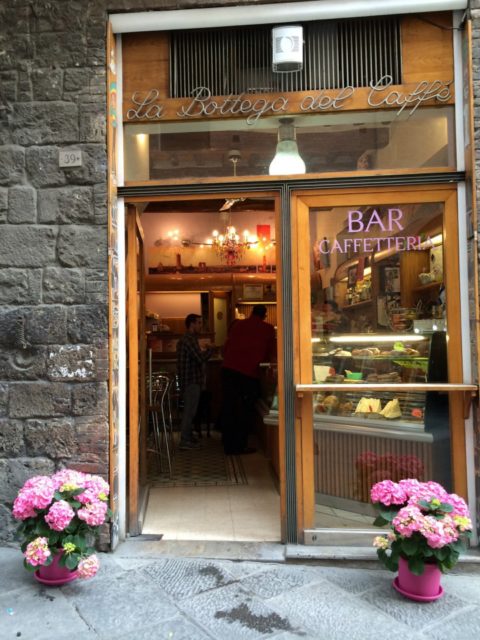 Siena seems, at first glances, like a typical Italian city, but with a deeper look, you can see there is nothing typical about it.  I got lucky and was privy to one of the most unusual neighborhood groups (the Noble Contrada del Bruco) that I have ever seen.  This was a rare glimpse into a society that dates back into the middle ages. 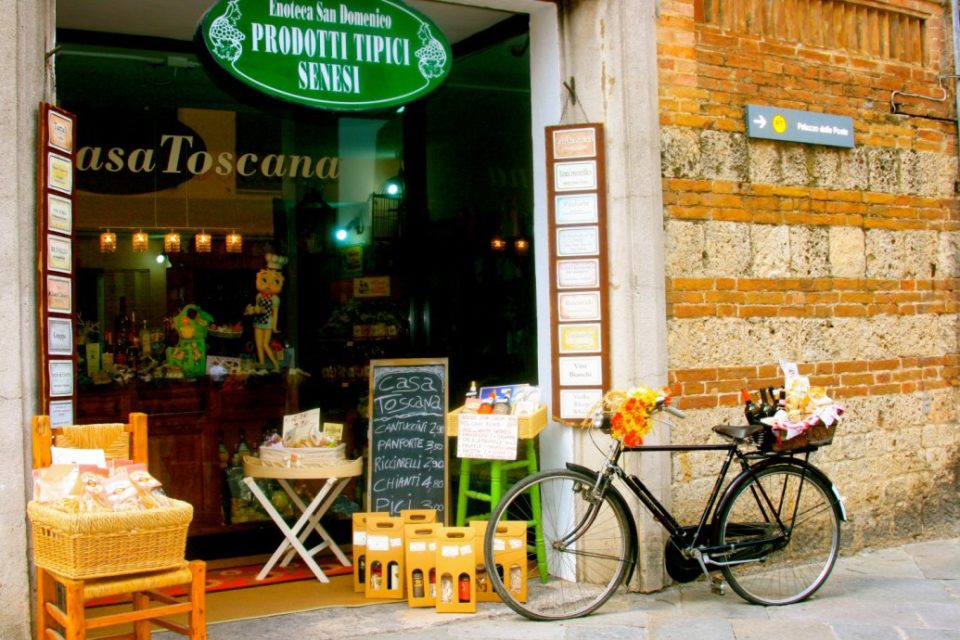 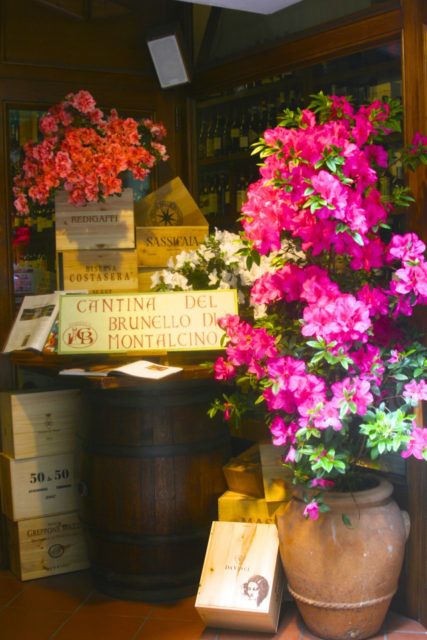 Since these contrades have lost their military functions through the years, they have become more of a group that exists behind the streets of the city, yet within the city walls as a symbol that binds the community members together, in a ‘family-like’ fashion. 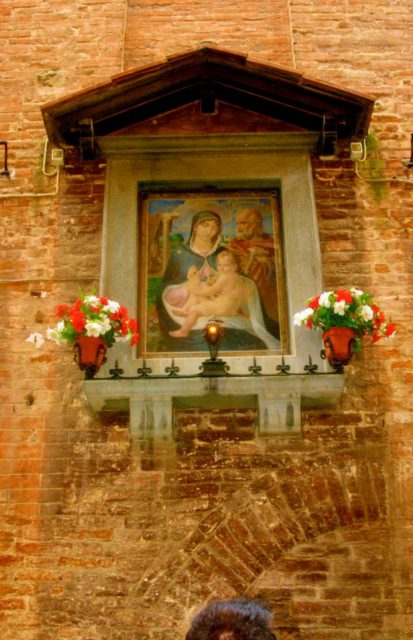 They celebrate each members births, marriages, deaths, the enjoyment of the parades and the victories of the Palio. This is not just a simple gesture given here and there, but a daily, weekly and monthly time spent together as a group.

Each contrade has allies and enemies and most Sienese knows all 17 of the remaining contrade in Siena and also knows which ones are friends and which ones are foes.  This system has survived into the 21st century and thrives as a vital form of a social organization that exists in the context of a larger societal, economic and political structure. 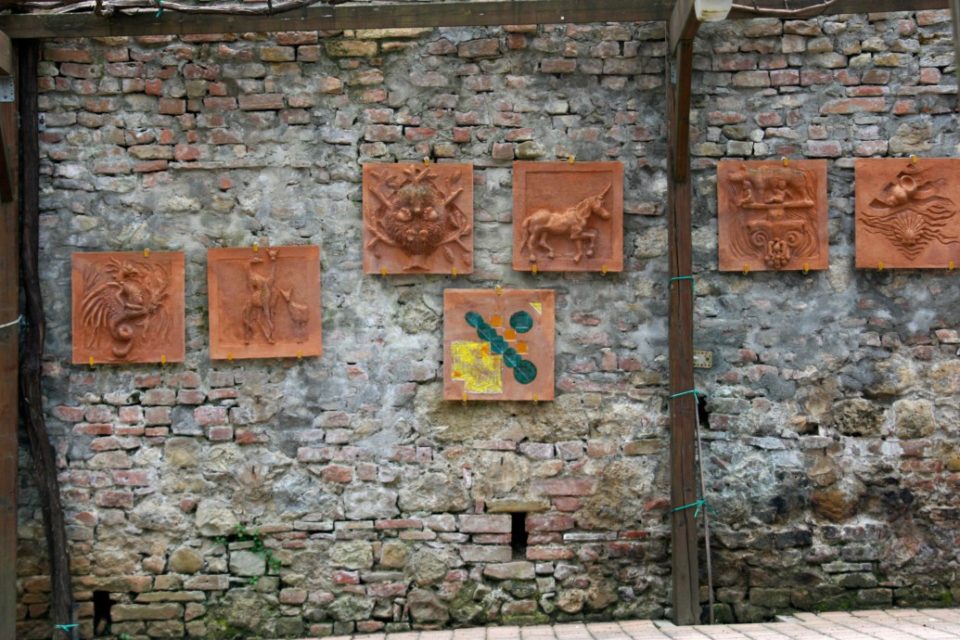 I found it absolutely fascinating, as I have never seen anything quite like it and the bonds that it ties amongst its members.  All contrade are individually governed and have their own squares, main streets and churches.  The contrada I visited even had its own private church and outdoor park that are only accessible to its members.  When you are walking the streets of Siena, you don’t even realize these places exist. 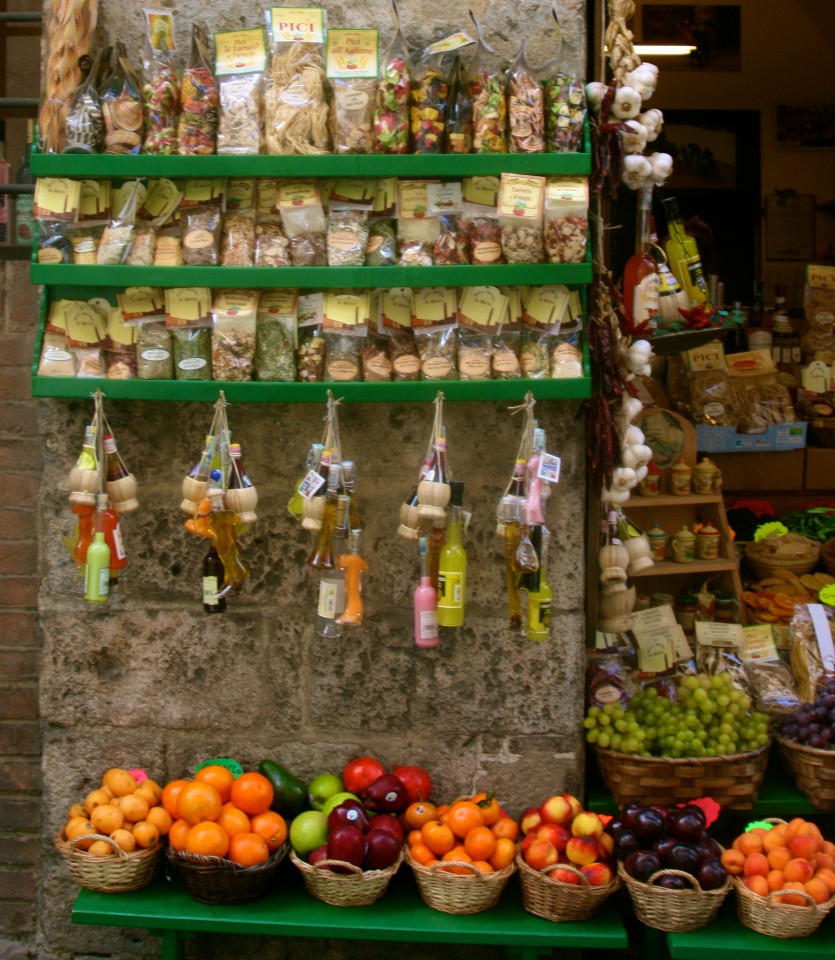 One must be born into a contrade, which means many family members may be in different contrade, including children, whom may be in a different one than their parents.  This is completely socially acceptable, as each contrade takes care of its own members. 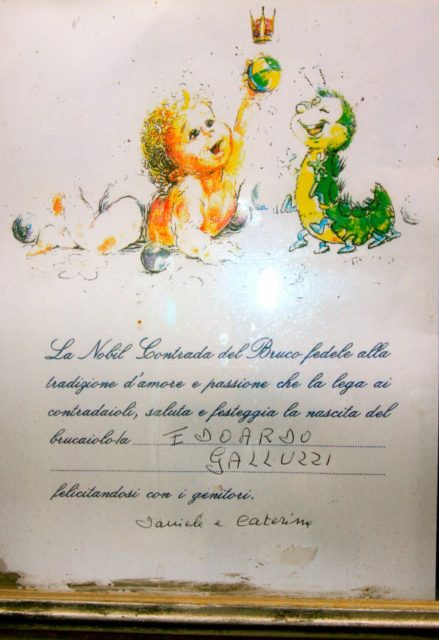 The day I was there, Edoardo Galluzi was born as a new member of the Noble Contrada del Bruco (which is the neighborhood that descends from the silk workers and is also known as the caterpillar). 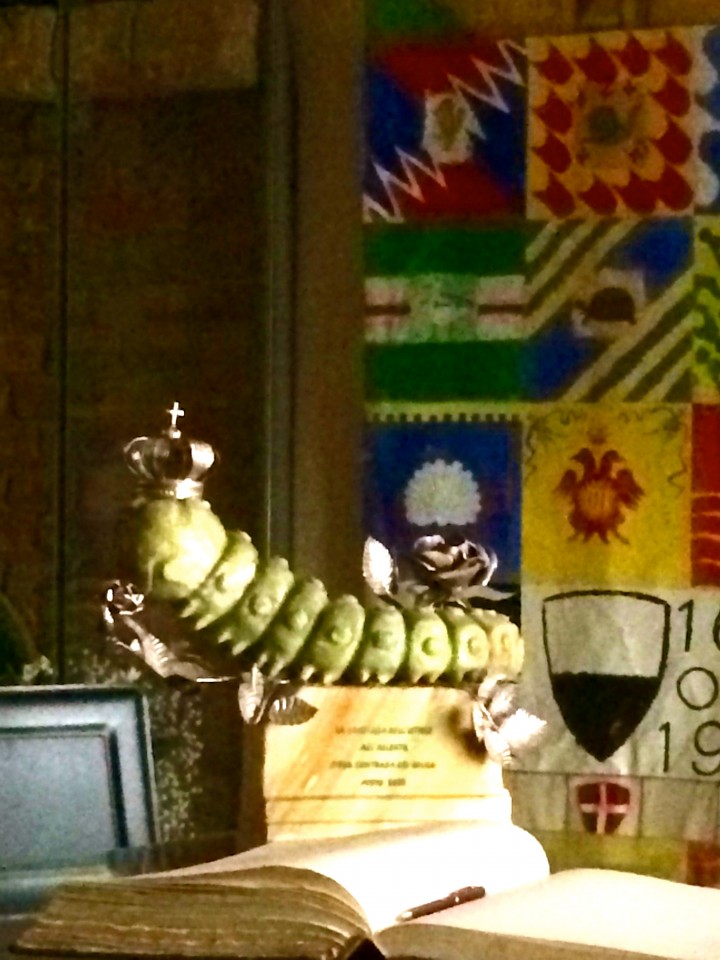 I feel sorry for the new guy moving into the neighborhood, who has no idea how this system works, as he will never be accepted into the contrade except under certain circumstances—like working in their kitchens, competing in their athletic events, mastering the tangled politics of their various feuds and alliances. 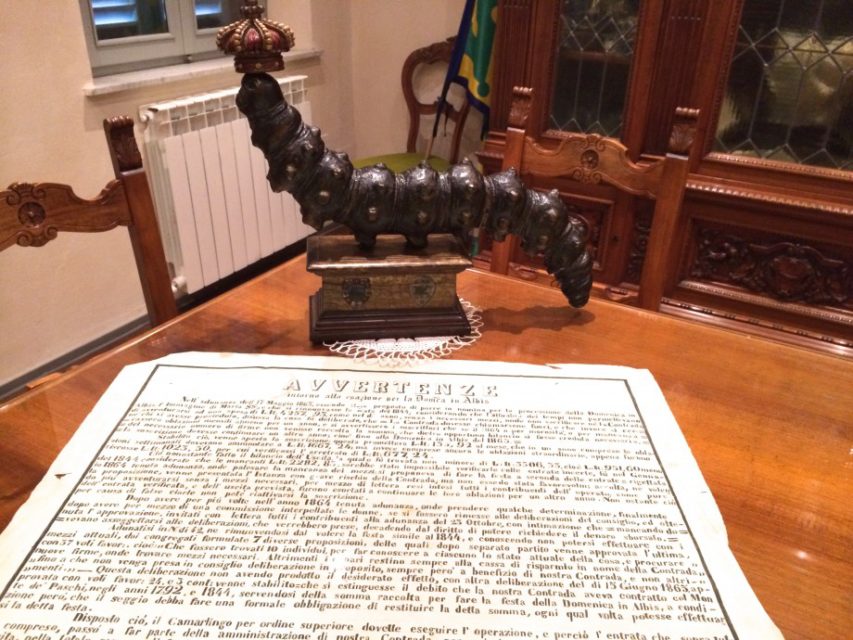 Securing a tour of the Caterpillar Contrada was a once in a lifetime experience and one that I will not soon forget.  I was able to understand the culture of the Palio, a small part of the history of Siena and the society of the contrade in a way I never could have had I not taken this tour. If you ever get a chance to do this, I completely recommend it.  I have a contact person for the Noble Contrada of the Caterpillar that will blow your socks off!  His name is Dario Castagno and he will give you a tour of his Contrada that is fascinating. 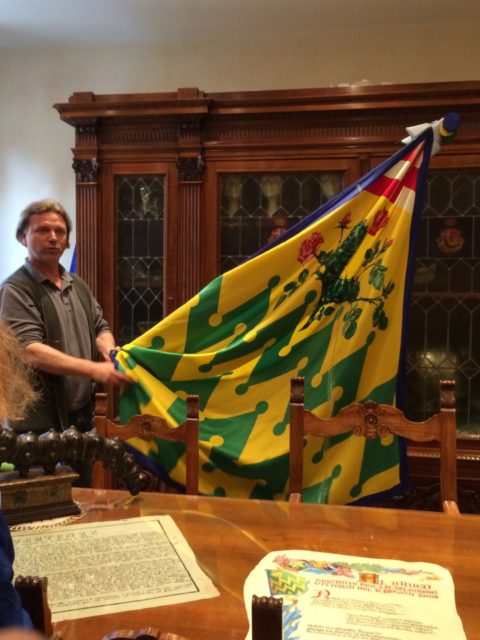 UPDATE: Torre wins the July 2015 Palio with Andrea Mari aka Brio on Morosita. Andrea Mari wins his 5th Palio and is the new Re della Piazza (King of the Square) 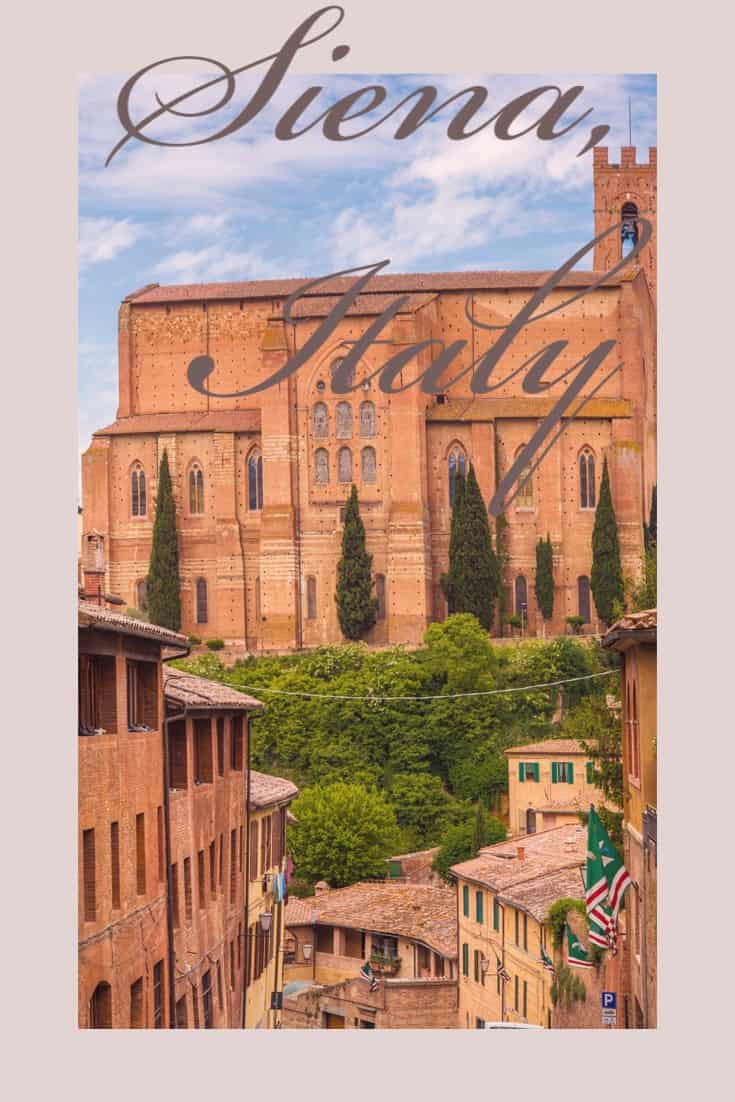 Disclosure:  My tour of the Noble Contrada del Brucco (caterpillar) by Dario Castagno was compliments of the Donati Family of Montestigliano, an amazing luxury Tuscan villa farmhouse, not too far from Siena, where I recommend that you stay for your visit in the region.

*Photo credit:  Photo taken off of a video provided by the Noble Contrada del Brucco. All other photos are, of course, mine.