The Uyuni Salt Flats in southern Bolivia is a massive, alien landscape that consistently ranks as one of the most renowned natural wonders. Not only in Bolivia but worldwide. Measuring more than 3,900 square miles (10,000 square kilometers) in area, the Uyuni Salt Flats is the largest of its kind on planet earth and makes for an unforgettable multi-day trek into the expanse. Despite being the main attraction, visitors will typically see a range of colored lakes and unique desert terrain. So be prepared to see a lot of beautiful places. 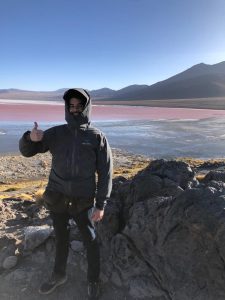 As it is located on the country’s high altitude Altiplano, it can get very cold during the day. Despite being considered ecologically as a desert. Your tour company is a great resource on everything you will need depending on the season and the current weather conditions which we will discuss more below.

What's in this post: hide
1 Getting There
2 When to visit
3 Tour Companies
4 Train Graveyard
5 Salt Flats
6 Laguna Colorada and Laguna Verde
7 End of Tour’s Closing Thoughts

As all tours begin in the small town of Uyuni, getting here is half the battle. The town is served by an airstrip that has routes to La Paz and Cochabamba. However, the more popular and cost-effective option is overnight buses that depart from all over Bolivia. 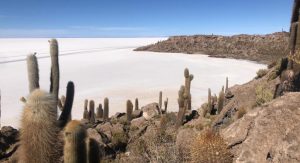 I personally booked transport from the Terminal de Buses in La Paz the day before, for cheap. The buses are comfortable and equipped with reclinable chairs and outlets for your devices. Going this route will have you arrive in Uyuni around six or seven in the morning, giving you enough time to get some cash for shopping and supplies on the road. And have some breakfast before heading out on your next adventure.

The best time to visit the salt flats is during the rainy season from November to March. This is because of the natural phenomenon that occurs. When a thin layer of water rests on the salt. During this period, the Uyuni Salt Flats become the world’s largest mirror. And create a perfect reflection that feels like it belongs in a Dali painting. Tours run all year however and if you are unable to arrive during the rainy season you will still enjoy your time in Uyuni.

At the edge of the salt flats is the sleepy town of Uyuni. The town’s main source of income comes from the booming tourism economy: meaning there are plenty of options when booking. I personally recommend Andes Salt Expeditions as their coordinator. 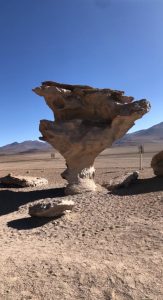 Braulio made the logistics of the trip a seamless endeavor and our guide, Raul, elevated the experience tenfold. A full tour of the salt flats and the surrounding attractions is a three-day/two-night trek for the low cost of 130 US dollars. The company provides tasty meals (including llama), accommodation on the road, entry to national reserves, and a highly informative explanation of the history of the region and its people. Bottled water is not included and not always available in the expansive salt flats, so it is important to stock up beforehand. As the tour ends at the border with Chile where I was heading next, I was able to pay an extra 70 US dollars for transport across the border and into the nearest town, a welcome bonus.

Upon leaving Uyuni the first attraction that you will be greeted with is a graveyard of relics from a bygone era, the train cemetery. Beginning in the late 19th century, Bolivia used a complex rail system to transport minerals to ports along the Pacific Ocean. After the mining industry collapsed in the 1940s, the system fell into disarray with a large number of trains deposited some two (three kilometers) outside of Uyuni on the edge of the salt flats. Visitors are able to climb to the top of the trains if they wish to. This is Bolivia after all, and doing so will start to give you a perspective of just how large the Uyuni Salt Flats are. 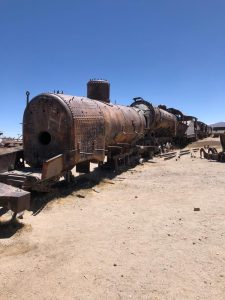 You have arrived at the main attraction. You’ve actually been driving through it for a while, that’s how big it is. Your guide will have many pits stops along the way and here are a few of the highlights. The Flags of the World is an area where visitors of past tours have planted their nation’s flag. People come from all over to visit the Uyuni Salt Flats. And it is surely represented in the sheer number here. Right next door is a cafeteria made entirely of salt where your tour group will have your first lunch.

Further along is the famed Incahuasi Island. An ancient coral structure rising out of the salt, Incahuasi was once home to a thriving tribal community. But is now a mini park where you will get an in-depth explanation of the geology of the island and the people that once inhabited it. Unable to grow on the flats due to the salt content, several desert plants inhabit the island which you can summit within a short 30-minute walk. 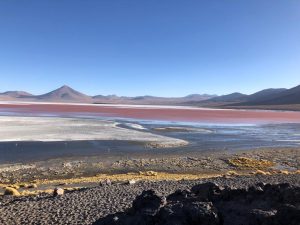 Once at the top, you will get a full 360-degree view of the landscape that seemingly goes on forever in all directions. Following your visit to Incahuasi Island, your guide will take you to your personal photoshoot. The miles of salt makes for a range of silly perspective photos that include props and a healthy dose of imagination. After you are done, you will get a chance to have some drinks and snacks as you watch the unbelievable sunset fall over the horizon.

Typically ranking as the best part of the tour after the salt flats are Laguna Colorada and Laguna Verde. Known for their unique pink and green colors, respectively, these high-altitude lakes are some of the most bizarre on Earth. They get their coloration from the mineral content and chemical reactions that the lakes’ isolation, as well as high winds, create on the surface of the water. The lakes are far too salty for most creatures though there is a healthy population of several species of flamingos that call these and other nearby lakes home. Also nearby are geyser pits and hot springs that will keep you warm during your early morning visit! 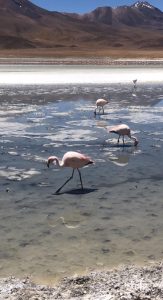 Now that you are near the end of your Uyuni Salt Flats tour, you have two choices. Option A, you trek north another two days north back to Uyuni in your 4×4. Option B, if you are feeling adventurous or feel it’s time to move on from Bolivia, you can get in a special shuttle offered through the tour companies that will help you with customs and transport across the nearby border with Chile’s Antofagasta region. 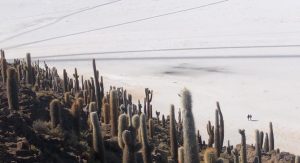 You will make it back to civilization much faster going with the latter option as the town of San Pedro de Atacama is located only an hour’s drive from the border crossing. Note that you have to choose whether to head north or south prior to starting the tour.

All in all, the Uyuni Salt Flats are certainly worth the time and money it takes to arrive and the memories you will make will undoubtedly last a lifetime.