Home » Destinations » There’s A Salt Mine In Poland With Chandeliers Made Of Salt!

I believe that Krakow is the #1 most underrated city in Europe. I won’t go into the details of the lavender growing along the old city walls or the shapes of the trees that blow in the wind or even the cobblestone central square, but I do want to tell you about this unusual place found deep within its crevices: the Krakow Salt Mine. 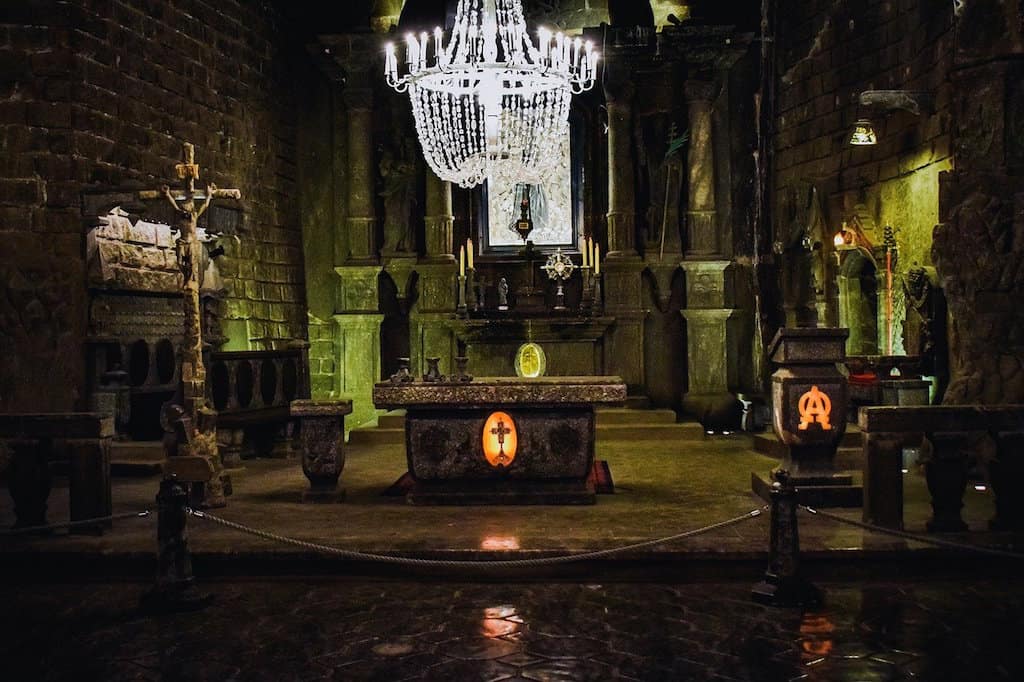 The Krakow Salt Mine was built in the 13th century and produced table salt continuously until 2007. It is 1072 feet deep and was one of the world’s oldest salt mines in operation until that time. The Wieliczka Salt Mine, near Krakow, Poland proves that salt can be a masterpiece all on its own. Today, the salt mine features underground lakes, 2,000 chambers, and chapels equipped with enormous chandeliers. Everything in this mine is made of salt. And it is super cool! 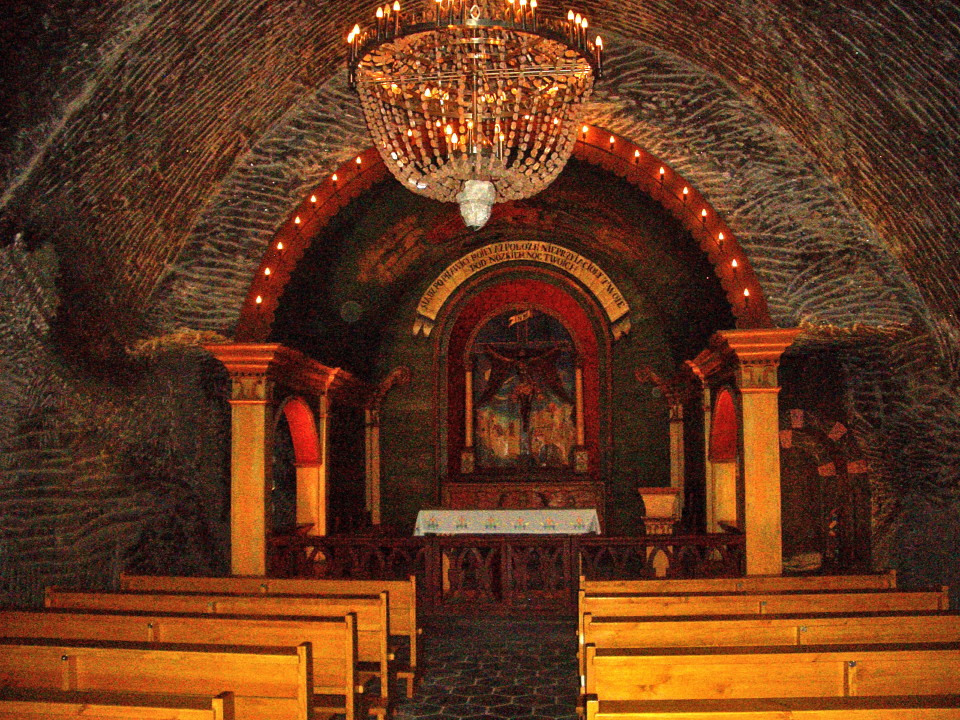 A Krakow Salt Mine Tour is offered daily. During a tour of the mine, you will have a chance to explore most of the salt mine rooms with carvings and witness its artwork.

A bit of history: Hardworking salt miners have carved over 300 passages within the salt mine! 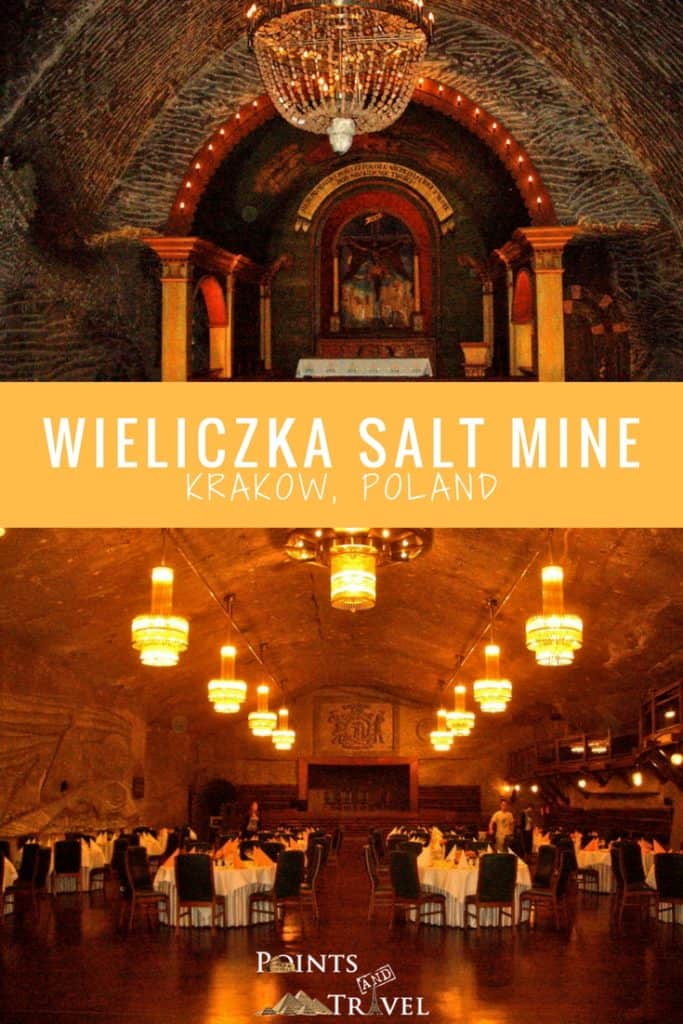 The history of the Wieliczka salt mine dates back to the Middle Ages when it used to be called the “the Great Salt” or Magnum Sal. It was during this time that it was the largest source of salt in the entire country. This was crucial to Poland’s economy.

All of the 2000 chambers in the mine are carved of salt. The corridors and even the floor are made of salt. There two chapels – one of St. Kinga and one of St. Anthony. They are also both made entirely of salt, including the altars and the statues of the saints. The chandeliers also contain crystal salt—the purest type of salt.

Entrance to Krakow Salt Mine

I think it is ironic that this place is named Krakow, as you go down, down, down into the “crack” of the earth by walking the 378 steps that take you to its entrance. Don’t worry about climbing those stairs back up as you get to take the elevator! The elevator is not fancy, but you will appreciate it later when coming out of the salt mine Krakow, that way you won’t have to climb all the way back up! 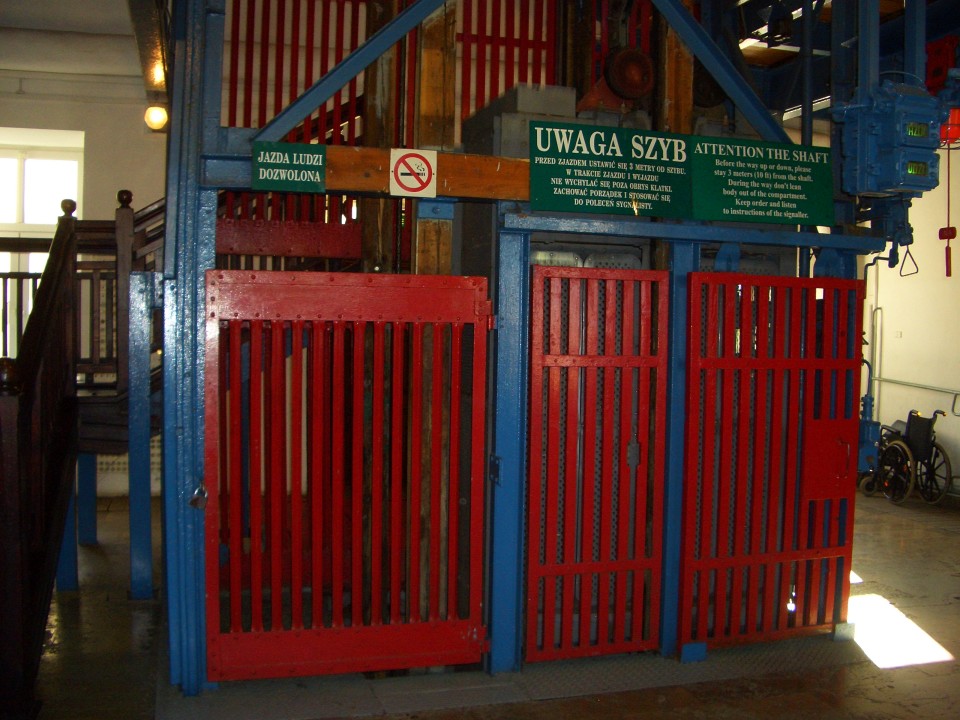 Looking for the Best Places to Visit in Krakow?

Salt Mine Krakow Tour: What to Expect

The Salt Mines Krakow tour guides speak English and they that help you understand what the salt miners did while underneath the earth on a daily basis. It truly is remarkable how this mine was created. 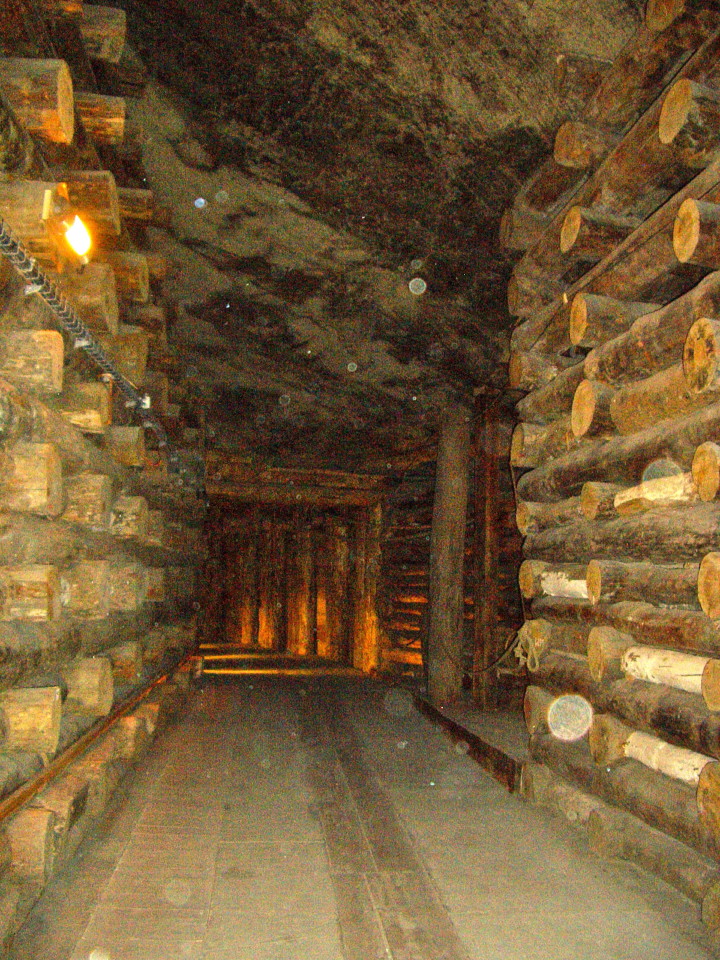 Underground Arrival in the Mine

Once underground, you will learn about Krakow history and the business of salt mining. In 1996 they turned this working salt mine into a tourist attraction. Townspeople, as well as tourists, have been fascinated by the art that was created underneath the earth by these miners. That is now the number one reason to visit the salt mines, to look at its art. It has literally dozens of statues, an underground lake, two chapels, and an entire cathedral carved out of rock salt. Today, it is one of the main tourist attractions in Poland. 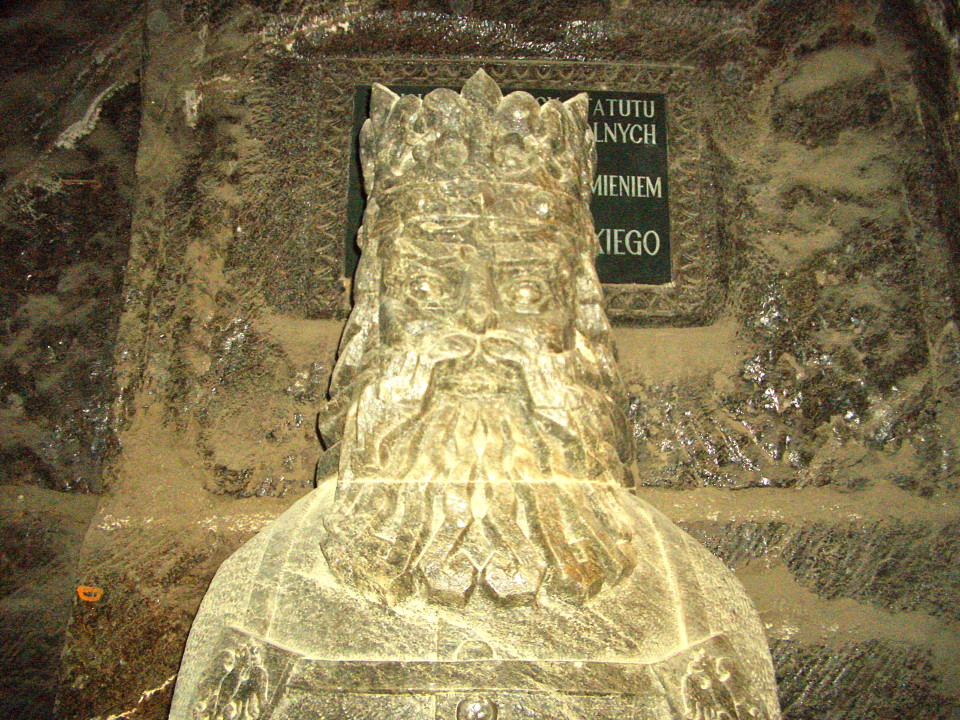 Salt may seem fragile and delicate, but it has a hardness similar to that of gypsum. Every block of salt down here is different in size, hardness, and color, which can be used in interesting ways. Much of the rock salt is naturally grey in various shades, resembling unpolished granite rather than the white or crystalline look that many tourists may expect. During the Middle Ages, before refrigeration, salt was valuable food preservative, thus the longevity of this operation.

They even have a Rehabilitation Center

As a physician, I found this fascinating: There is a physical therapy clinic located in the mine that is about 135 meters underground. The entire treatment takes about 6/1/2 hours and is located in the chamber known as the Lake Wessel Chamber. It has a unique microclimate that contains bacteriological purity. The air contains large amounts of sodium chloride, magnesium, and calcium ions. They offer treatment for breathing problems, allergies, and metabolic disorders! They even have long-stay treatment plans you can take a look at here.

The highlight of the entire tour is the Chapel of St. Kinga, a cavernous underground hall. This place is massive and unbelievable.  You will get a chance to look around this place to see the detail of the carvings on the wall. They are incredible! 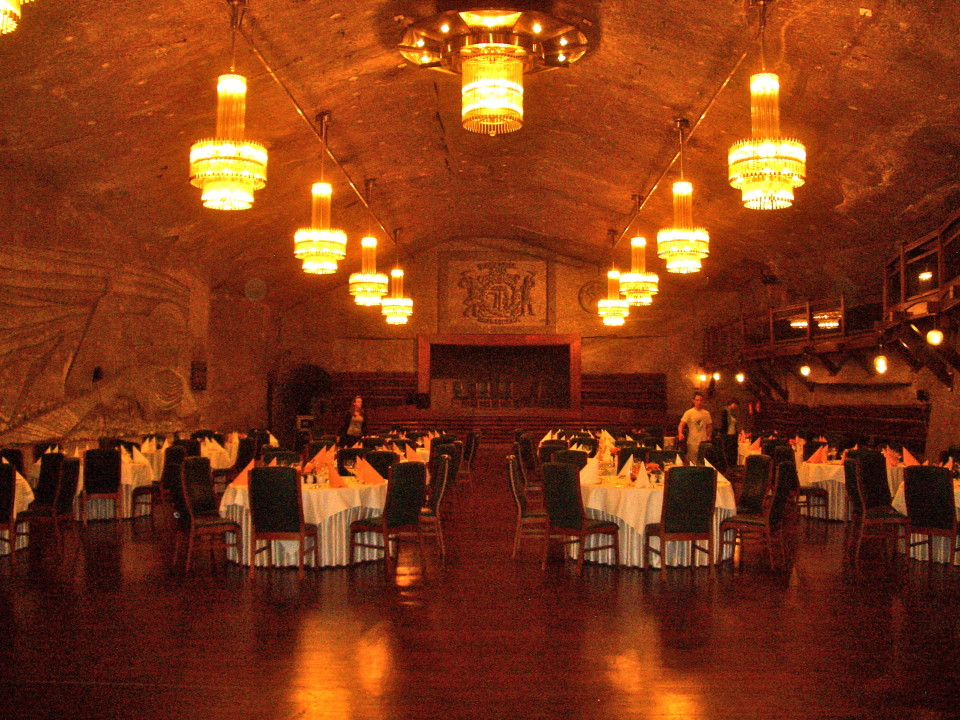 This entire room and all of the art in it is carved salt!

The Chapel of St. Kinga is located approximately 331 feet below ground. It is 101 feet x 50 feet in size, and its floor area is 5005 square feet. Its splendors make it the perfect location for a christening, a wedding, or a music concert and can hold up to 400 people.

Krakow Salt Mine Tour: But who is St. Kinga?

St. Kinga was a woman! Yes, that’s right, she was also a Catholic saint in the 12th century! She lived from 1224 BC to 1275 BC. She was the daughter of the King of Hungary. And known as the Grand Duchess of Poland. During her reign, St. Kinga got heavily involved in charitable works, and when her husband died, she sold all her material possessions. She decided to dedicate her life to the poor. She left all government-related work to join the monastery at Sandec, where she would spend the rest of her life in prayer.

Well you knew there had to be a story about her, didn’t you?  As the legend goes, St. Kinga threw her engagement ring into the Maramures salt mine in Hungary. The ring traveled along with salt deposits to this Krakow Salt Mine where it was rediscovered. On the very spot that it was found, the miners erected a statue of her. There is even a scene of artwork depicting the time that the minors found her ring! Obviously, this makes St. Kinga the patron saint of miners! 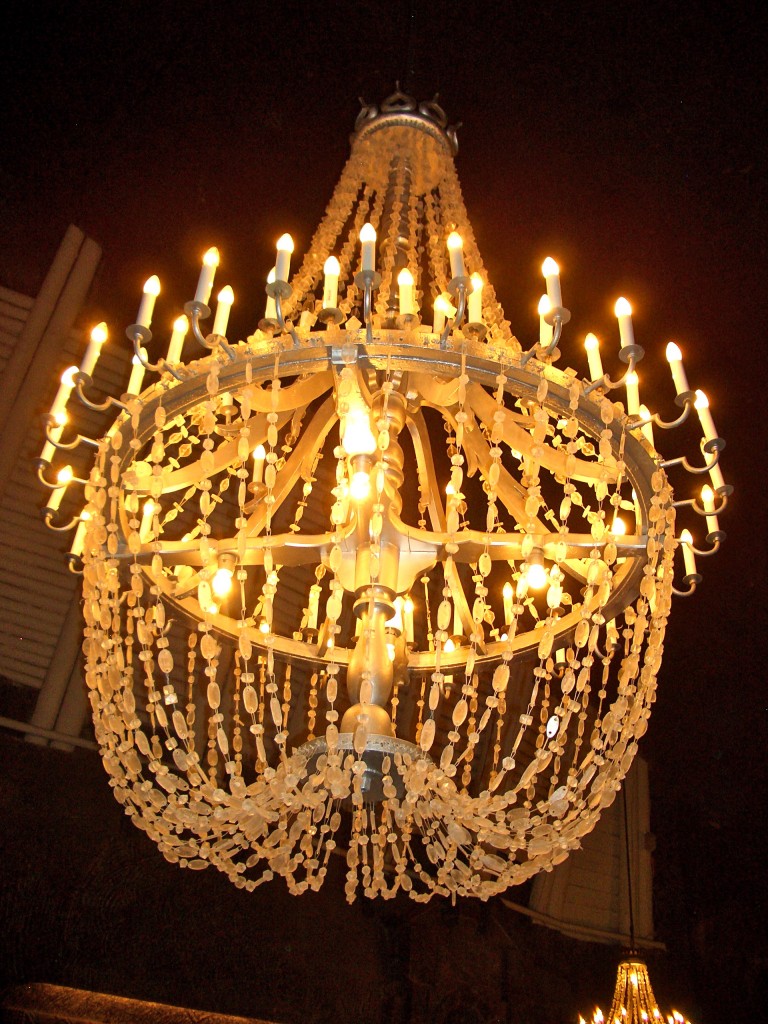 Even the chandeliers are made of rock salt!

And the glow of the crystal chandeliers illuminates on the intricately carved floor. It is quite stunning to see.

Be sure and wear comfortable shoes since you will be walking a lot and it is important for good foot placement.  Also, wear warm clothing since you are going underground and it tends to be a bit cold and damp.

visiting Auschwitz while you are in Krakow, so here is a guide.

I was in Wieliczka Salt Mine 2 weeks ago. For me it's the most stunning place in Poland. I like your photos and description, thank you for sharing this.

Cool! I can't wait to go back to Poland! Loved it there, I think it is one of the most under-rated cities in the world.