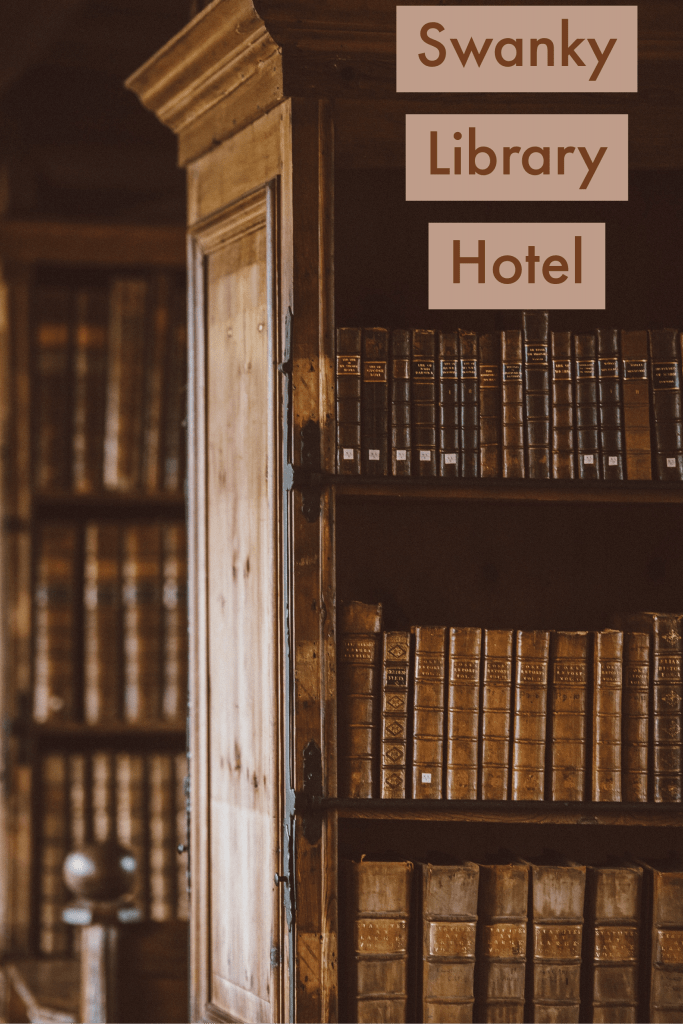 Coming off a week of touring in Europe, I needed a place to relax. I know, there is no feeling sorry for me, the “non-stop traveler” by choice, but it is harder than you think at times! I wanted nothing to do with any cheap or rundown airport hotel but instead wanted upscale and hip.

Either “smart luxury” or “splurge” and at the time, I didn’t care which. I only wanted to relax, get to my room, drop my luggage, chill for a while with the Internet, and then get to Bahnhofstrasse Street for some shopping in downtown Zurich. I needed the perfect detox before my flight home to the US. And look at what I found: B2 Hotel + Spa Zurich, Switzerland, a swanky library hotel, Zurich, Switzerland! 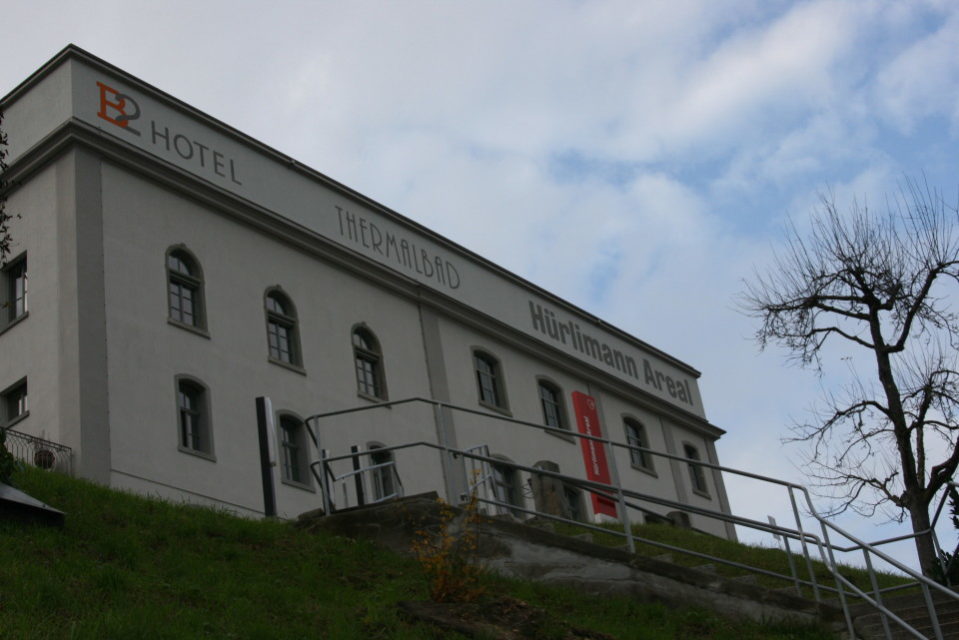 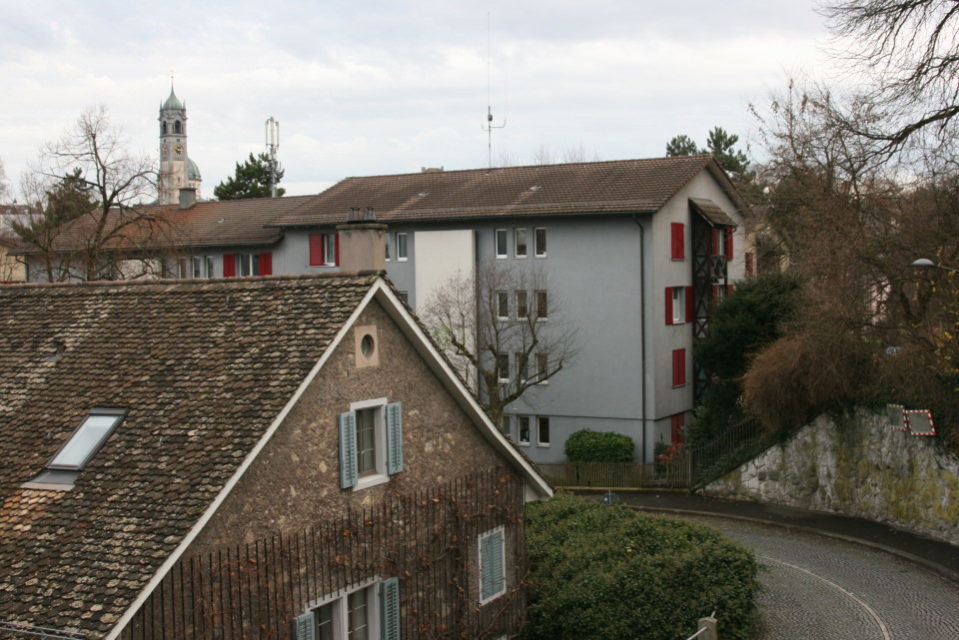 As I stepped out of the taxicab in the Enge neighborhood and entered the lobby, I knew I had made the right decision. I had first heard about the B2 Hotel and Spa while doing research for my upcoming Viking River Cruise. I needed a few extra nights to stay while in Zurich. It caught my eye right away as it was one of those boutique-y, and oddly-placed urban hotels that were only a 10-minute tram ride to the posh shopping in Zurich. Upon arrival, I could tell it was something special. 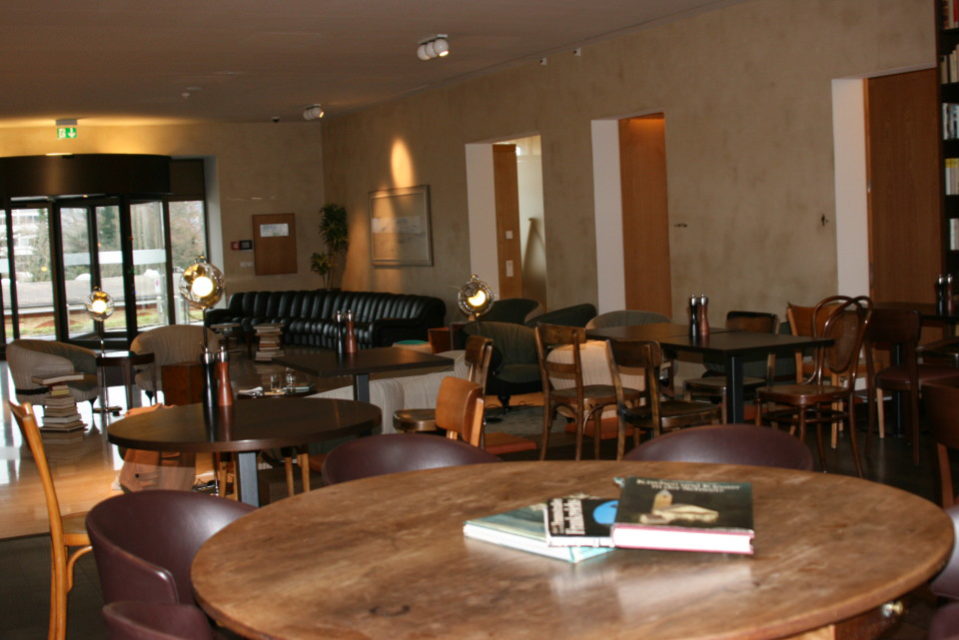 Entrance to the Swanky Library Hotel

I entered the sprawling library hotel lobby with their two-toned cream and brown chairs with cinched-in leather belts and stacks of hardcover books in place of coffee tables, as well as old wooden beer crates that were used for the same. 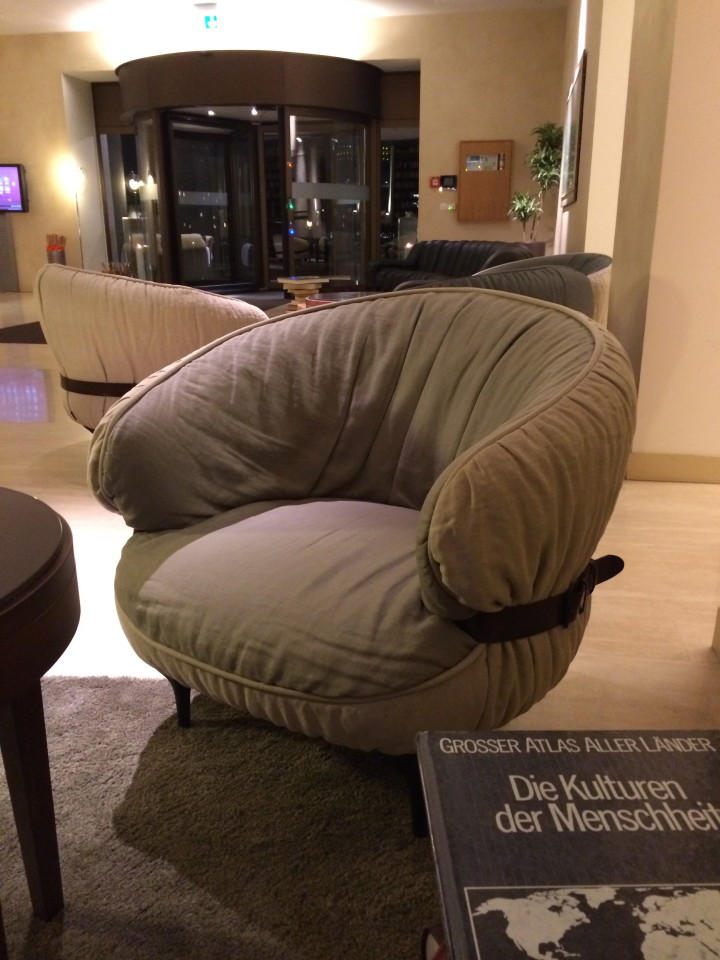 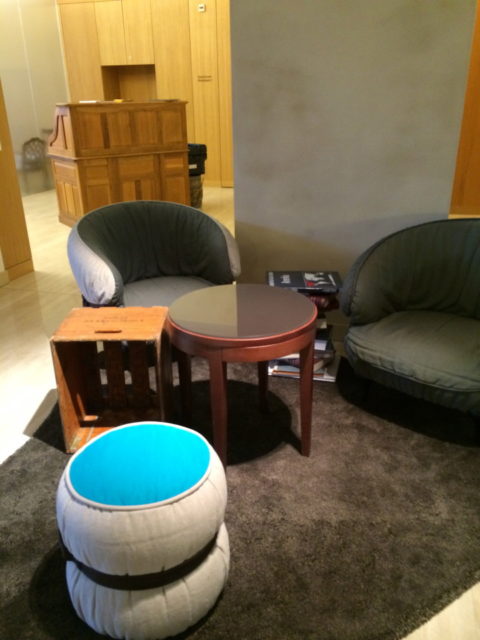 I looked past its massive 20 people black-tufted leather couch and was impressed with its minimalist décor and multiple seating areas. Immediately the young hipster wearing a double stitched denim vest with matching jeans greeted me. I was checked in with my spa bracelet (key to the penthouse floor) and bathrobe/slipper within minutes.

Then I saw it, the centerpiece of the hotel: 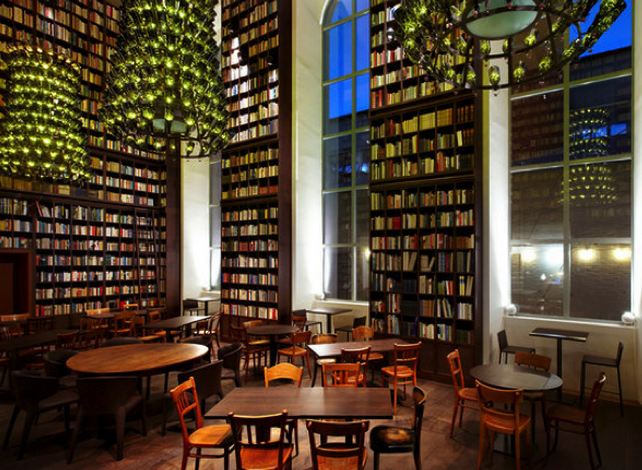 The Library Lounge at B2

Just beyond this spacious lobby was the massive 33,000-book Library Lounge that had captured me before while flipping through their photographs on the website. These books fill three walls of the 36-foot tall lounge. All 33,000 were purchased from the same man, his life’s collection, and he was happy to have them stay together in one central location. Hanging from the extensive ceiling were lighted, upside-down green beer bottle chandeliers, which made the entire room ‘pop’. 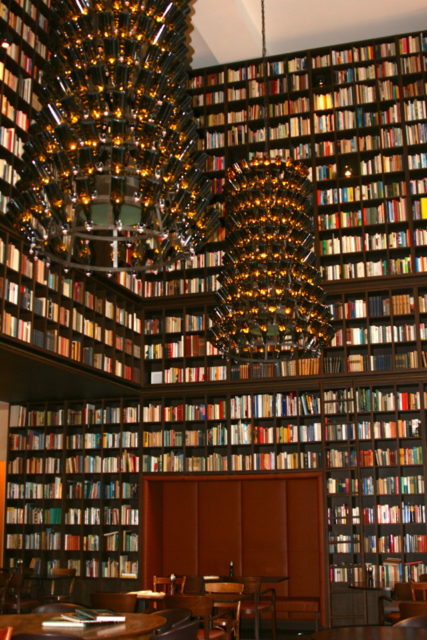 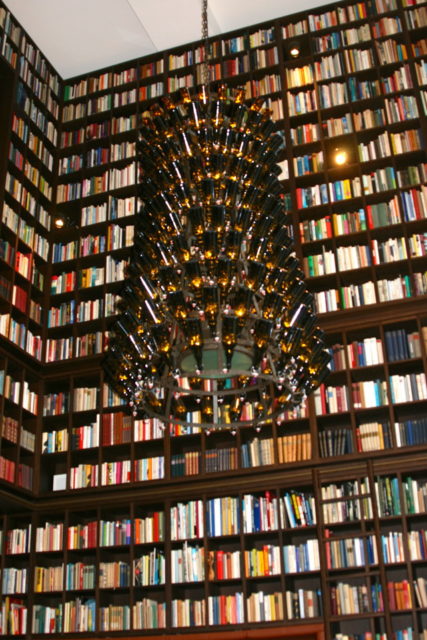 The B2 Boutique Hotel + Spa is a 60-room, four-story property that occupies the old mash room of the Hürlimann breweries from the late 1800s, thus the beer bottle chandeliers. They used the theme of the distillery and the library books throughout the hotel and “spilled “them into the minimalist décor and well-equipped rooms. The location is a 16-acre brewery grounds which includes a boiler room for private parties and photo shoots, a cobblestoned complex of shops down below the hill that is now home to Google’s Zurich offices and of course, the famous rooftop spa. 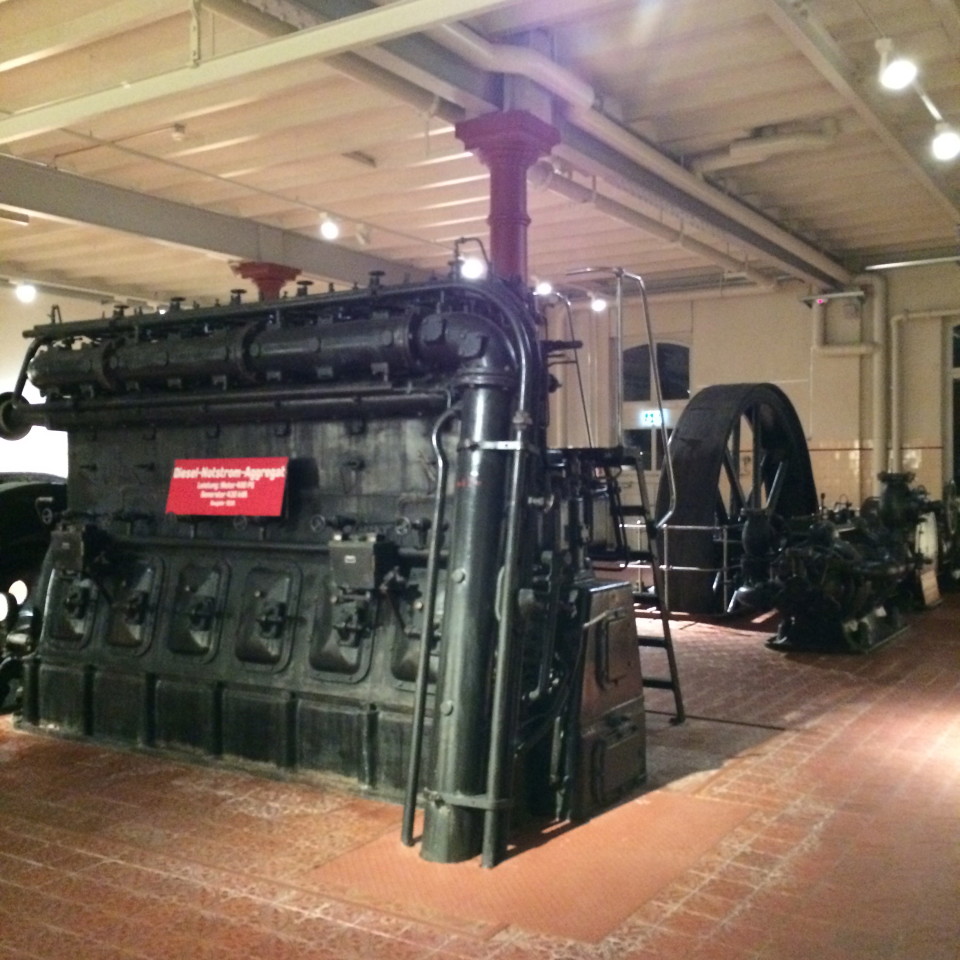 This Brewery was once the largest brewery in all of Switzerland and now it has been reformed. Its’ renovation into a hotel, library, and spa is brilliant. The B2 stands for boutique and bookmark hotels.

Painting of the Distillery and grounds – B2 Hotel + Spa Zurich, Switzerland 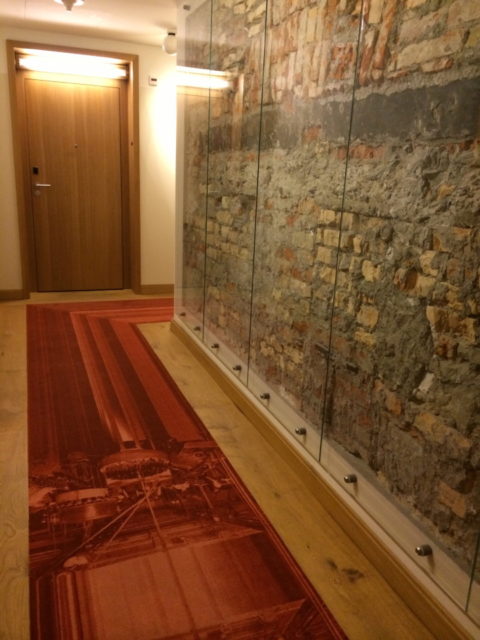 The B2 Spa: Outstanding! 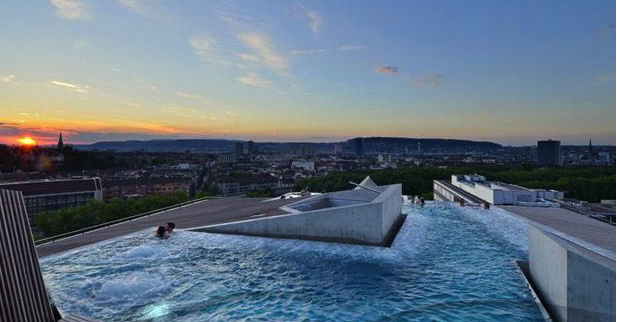 B2 Hotel + Spa Zurich, Switzerland photo courtesy of them 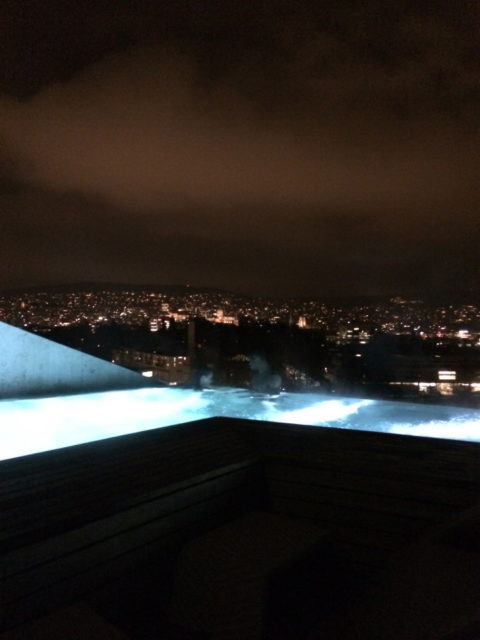 The indoor thermal baths were perfectly situated among stone walls and vaulted ceilings while on the inside of the top floor.   But then a quick swim underneath a swim-thru and you are magically transformed to the rooftop, open-air, heated pool that had stunning views of the city. It was literally like being in heaven and was pure luxury.

Inside the ambiance was lightly lit with perfect seating areas for guest après spa with a minimalist café. The spa strictly enforces swimsuit/bathrobe clothed guests, so don’t even think about going up there without it. The cost is $25 for guests of the hotel and $55 for non-guests and worth every penny. 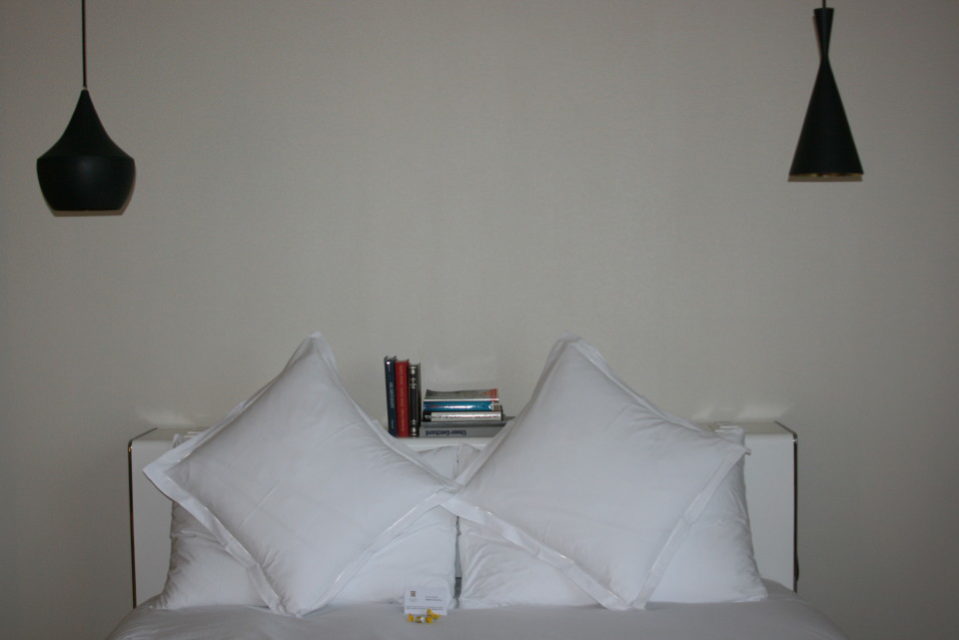 I checked into the 300-square-foot Executive Room, which had an airy, minimalist feel, probably due to the gauzy white curtains and the hardwood oak floors. Above my comfy bed was a collection of books and great lighting for reading at night. I also enjoyed the blinds that move with the flip of a switch and the blackout panel was perfect. 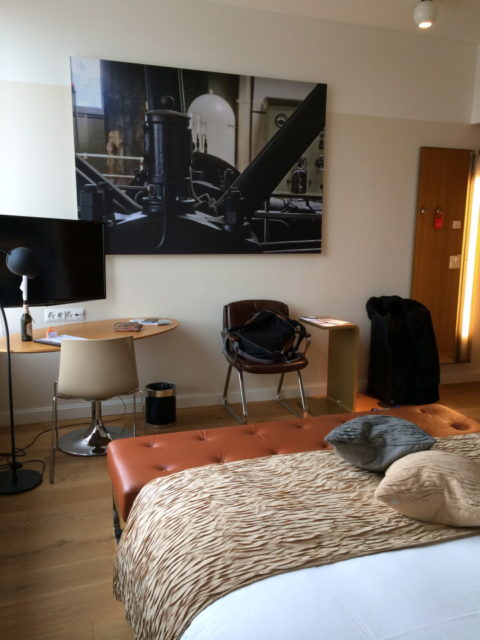 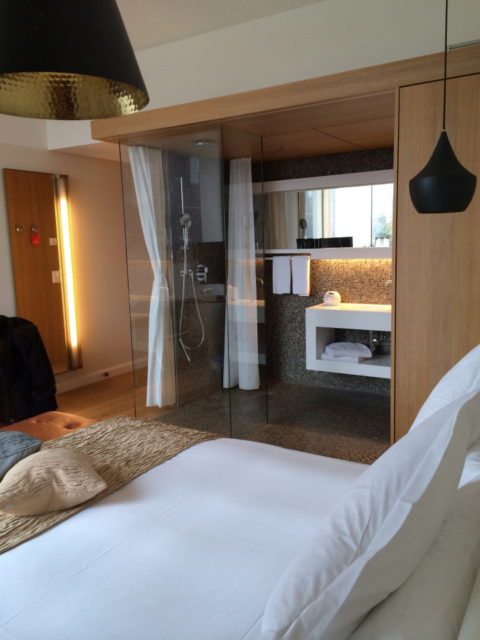 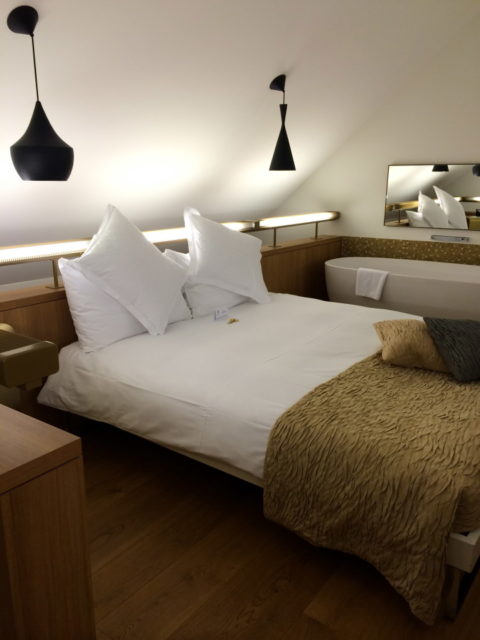 The bathroom was one of those fancy ones with a heated mosaic glass floor and it was of the perfect rain-shower variety that was surrounded by three glass walls (although there was a wrap-around curtain if you need it, for those business situations.) There was ample counter space, a facial mirror, and toiletries from Ada Cosmetics’ Green Collection. 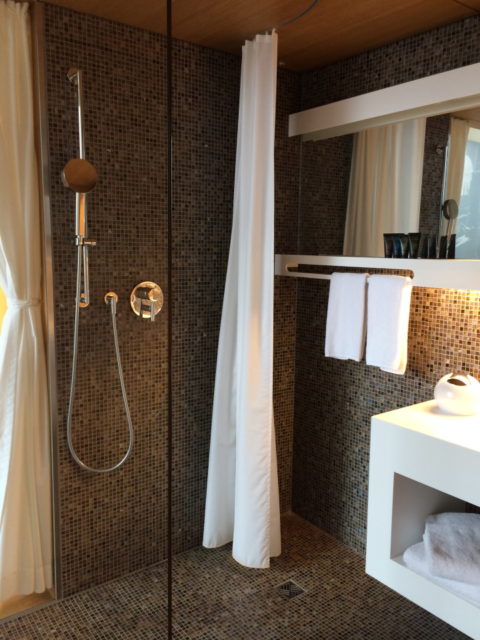 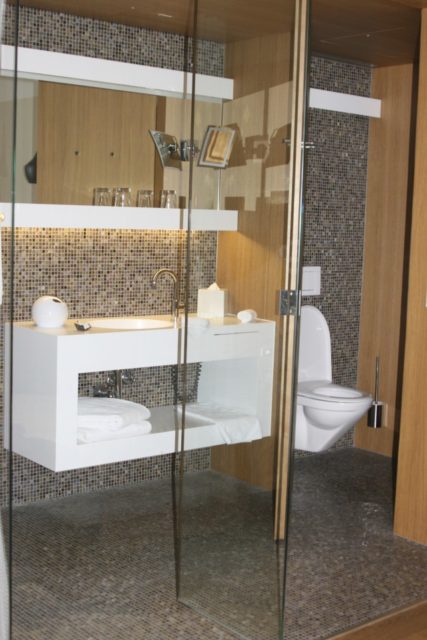 There are free beverages in the mini-bar, replenished daily, and free wifi, plus actual books to read!

Breakfast is included in the price of the room in the Library Lounge and you certainly don’t want to miss that. They have a lot of choices from local swiss-style croissants (gipfeli) to challah bread (zopf), as well as herb-crusted bacon, free-range eggs cooked to order, air-dried beef from the Grison Alps, and every kind of cheese you can imagine.

I practically fell in love with this library hotel, from the design to the service.
The design, especially the library cafe, was great! I definitely recommend to anyone coming to Zurich, to stay at this hotel. There are times when the hotel ends up being the destination and this is one of those times. I don’t even have to know about the Trip Advisor Certificate of Excellence, as I experienced it myself! 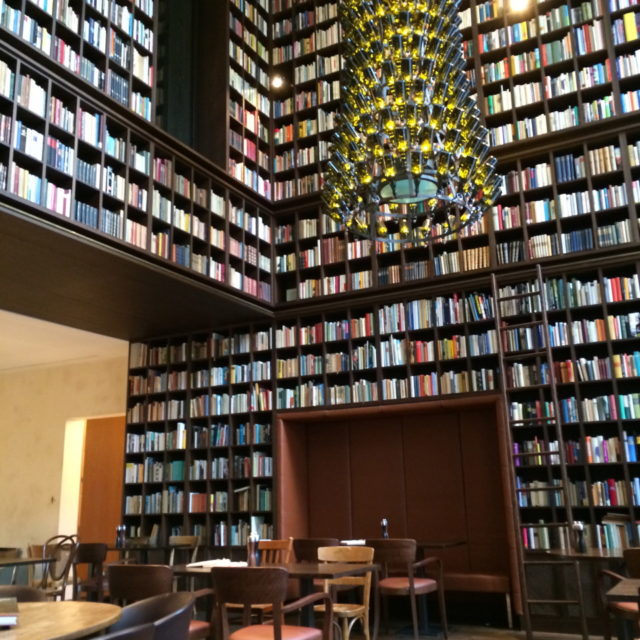 Other Library Hotels from Around the World:

The Resort at Longboat Key Club in Florida

Disclosure: I was a media guest of the B2 Boutique Hotel and Spa in Zurich, Switzerland, but the joy I felt while on that rooftop spa was all my own!

Indeed very swanky hotel, and that library is really impressive. Glad that they have kept the collection together....