Home » Adventure » About How Long does a Black Bear Live in Alaska?

On my trip from Seattle to Alaska with Holland America, I noticed they talked quite a bit about black bears at the Alaska Rainforest Sanctuary in Ketchikan. When you first arrive at the sanctuary, a naturalist guide joins you down a raised walk path. Soon he has us watching out for black bears in search of spawning salmon. Of course, I was certainly curious about black bears. I wanted to find out more about their habitats, as well as the best places to see a wild black bear in Alaska. 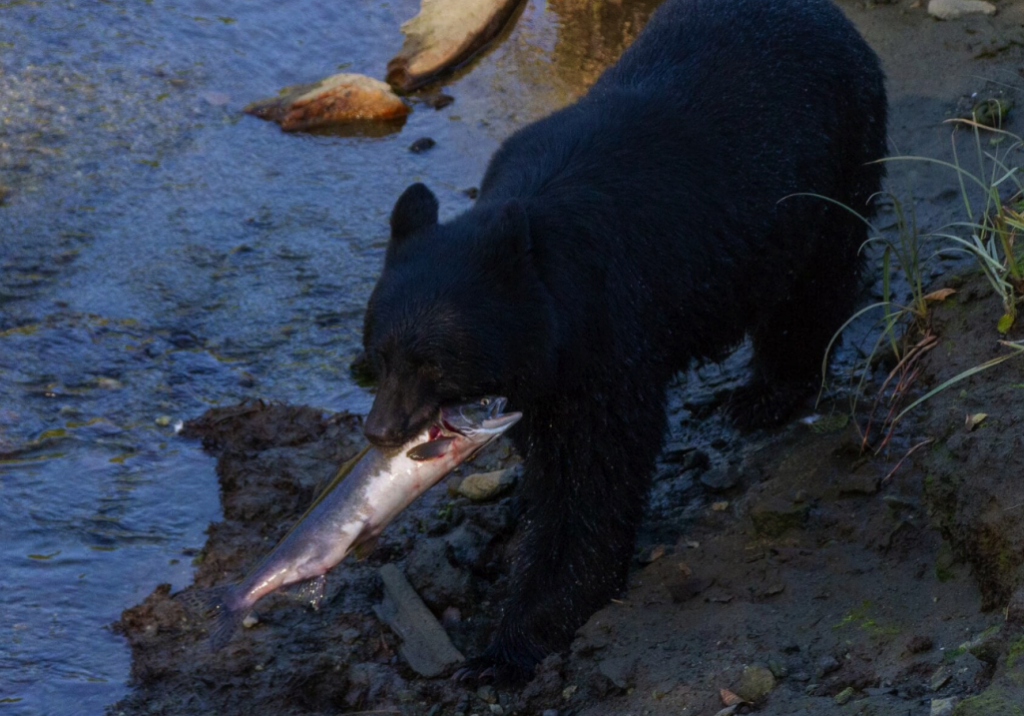 I was fortunate that I had seen so many black bears in Alaska – especially where the female black bear population was quite high. I guess this is the best place to view them in a habitat – the Alaskan Rainforest Sanctuary. But let’s look at bears outside of the sanctuary.

#1 Where do Black Bears Live?

I was able to see quite a few black bears while in Alaska near Ketchikan. Especially adult males during the breeding season, which is from June to August. This black bear species ranges from Canada in the north to Mexico in the south. They also live in forested regions of North America. They travel in family groups as cubs until they reach about the age of 2. They inhabit both coniferous forests, as well as deciduous or coniferous trees, open alpine, or natural habitats.

#2 How Many Black Bears Are There?

The wild black bear Ursus americanus just so happens to be the most common and the smallest of all American black bears found in Alaska. I even read that the black bear is only found in the Americas, after the grizzly bears and the polar (glacier bear.)

There are Three Species of Black Bears:

There are 3 species of black bears found in the northern regions and believe it or not, the estimated number of black bears runs into the 100,000’s that inhabit Alaska! Across the entire North American Continent, black bears are thought to have a total population of around 800,000, but this is just an estimate of bear numbers. Most black bears don’t stay in  close proximity to each other as they move throughout the forrest.

Did you know that Holland America was voted as the Best Alaska Cruise
2020 AFAR Travelers’ Choice Awards?

#3 What to do if you see a Black Bear in the Wild? 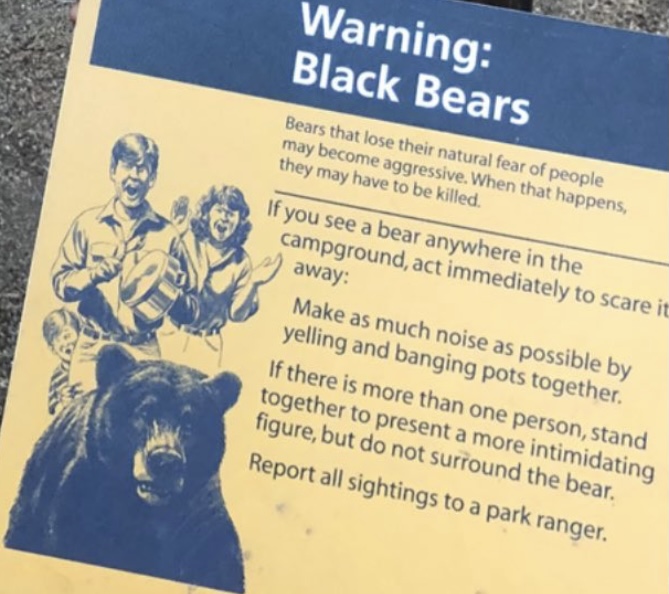 If you come across a black bear at close range, you should slowly retreat still facing the bear’s brown muzzle. Do not run, as they will go after you. Black bears are known to make mock-charges to within a few yards – if they do this, stand your ground and shout “no” or “go away.” If they sense danger, most likely they will run.

#4 What is the Black Bear Lifespan?

Black bears live for an average of 18 years in the wild, but the world’s record for the black bear is an impressive 39 years! The world’s oldest known bear is over 39 years old. She was radio-tagged in 1981at the age of seven and has roamed the forests of the Bigfork-Marcell area of northern Minnesota since.

The oldest captive black bear was 42 years old when she died. She and her companion Boo-Boo lived together for more than 33 years. Zoo director Jeff Mitchell of the Springfield Zoo says Mandy was “wonderful, fun-loving, and slightly stubborn.” One of the oldest Asiatic black bears (ursus thibetanus) ever recorded lived to age 42. Their typical lifespan is 25 to 29 years and they typically cover many square miles throughout their lifetime

#5 How Much Does a Black Bear Weigh?

To me, they seemed quite large weighing in anywhere from 99 to 550 pounds! Apparently, the black bear’s weight varies depending on the years of age, sex, and time of year you see them. The adult black bears living in Alaska feeds extensively on salmon, so their weight was at least 75-1278 pounds heavier than the average black bear! 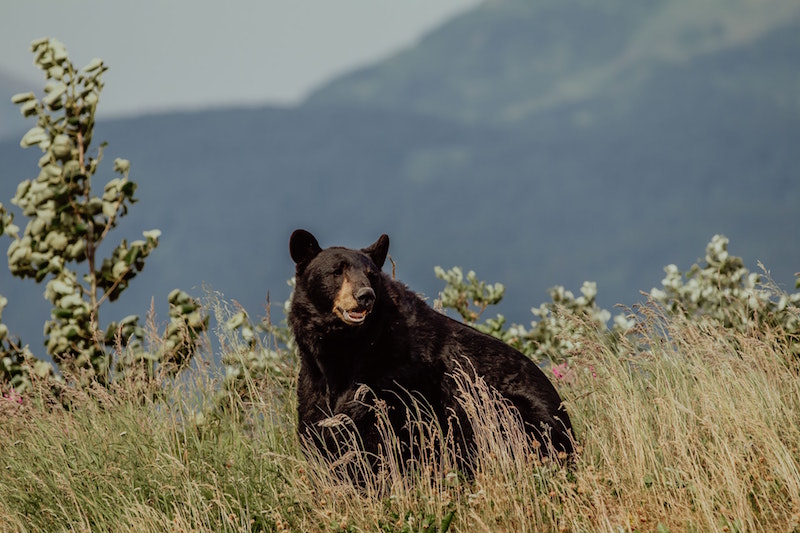 #6 What color are Black Bears?

Black bears can vary in color from jet black to white. But most likely, black is the color encountered most frequently across the state of Alaska. However, cinnamon-colored or brown bears (ursus arctos) are sometimes seen in South Central Alaska and on the Southeastern mainland. Also, these Cinnamon-colored black bears are common in Alaska’s Interior.

A glacier bear is typically a bluish-colored bear and may be found in the Yakutat area and in other parts of Southeast Alaska near native Americans. Black bears often have brown muzzles, small eyes, and some also have a white patch of hair on their chest. A subspecies of black bears with white fur, known as the Kermode or Spirit Bear, lives in British Columbia.

Of course they can! Black bears are excellent climbers. I saw one small black bear scaling a tree in the forest that had a short tail. His claws gave him a great grip. Remember, baby black bear cubs can be very adventurous, climbing hollow trees high into the treetops in the early summer (or late summer). These small mammals must stay safely away from predators like Grizzlies.

I even saw quite a few adult females with their cubs on a home range near Ketichikan. Momma bears don’t let the baby bears get out of their sight until these baby cubs have reached sexual maturity (at about 18 months) or have plenty of fat reserves.

#8 Why do Bears Steal Human Food?

Adult black bears will leave the forest and travel great distances to seek out food sources because they have an exceptional sense of smell. This sense of smell leads them to search of food items in rubbish bins and outdoor storage facilities or by entering gardens and campsites where people have not disposed of their trash properly.

These bears generally are opportunistic feeders and hunt for the availability of food. They feed on fruit, nuts, shoots, and vegetation, but here in Alaska, they love the salmon. The best time to view bears catching Salmon is around late summer from August to mid-September. In June and July, you can spot the bears eating grass or even clams. 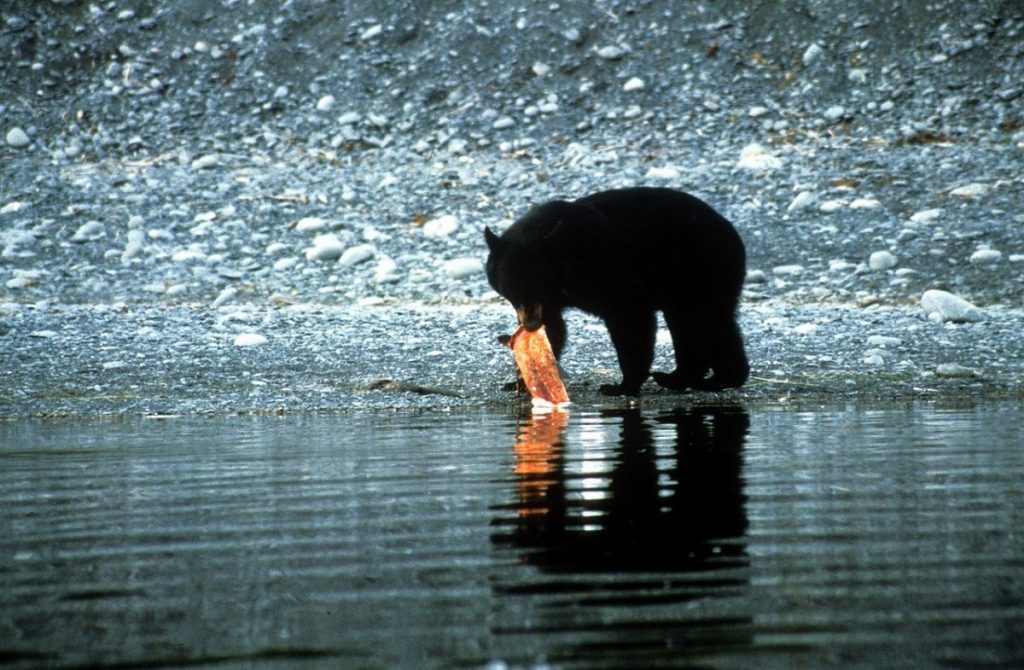 A common bear is also perfectly capable of breaking into old abandoned buildings, cars, and machinery.  Be sure and don’t leave out pet food for these solitary animals, as in many communities, that has become a serious problem. As food availability can be scarce at times. Many times the black bear is looking for natural foods like fertilized eggs found near brush piles and fruit trees.

They also eat human or pet food when they see garbage cans, but in general, their vegetation stays pretty consistent when they search for food. But watch out as you may have a chance to spot wolves, foxes, as well as the possibility of mountain lions near garbage cans as well. So be sure to pickup your trash and dispose of it properly.

Species of bears are great swimmers and feel totally comfortable in the water. Many times they will enter the water in search of fish, especially Salmon here in Alaska. Black bear cubs take to the water easily and seem to enjoy being in a large bodies of water like rivers and lakes. Many times, that is where you may spot them feeding.

#10 When is the Mating Season of Black Bears?

As mentioned before, the mating season can take place anytime from June through August (the summer). The black bear habitat is known as a bears den, as they are true hibernators. It is at this time, they put on a lot of body weight and have a large body.

Apart from the mating season, male and female bears are usually alone or solitary, except for sows (female black bears) with cubs. Their embryos do not begin to develop until the mother bear enters her den. Cubs are born in the middle of the winter, usually between late January, February, late March or early April (early spring to late spring). The baby cubs are born in brush piles in their winter dens following a gestation period of about seven months.

#11 How many Cubs do Black Bears have?

Female black bears can give birth to up to six cubs, but typically they have two to three, and usually breed every other year. Young males usually stay with their mother for about 18 months as mentioned before. 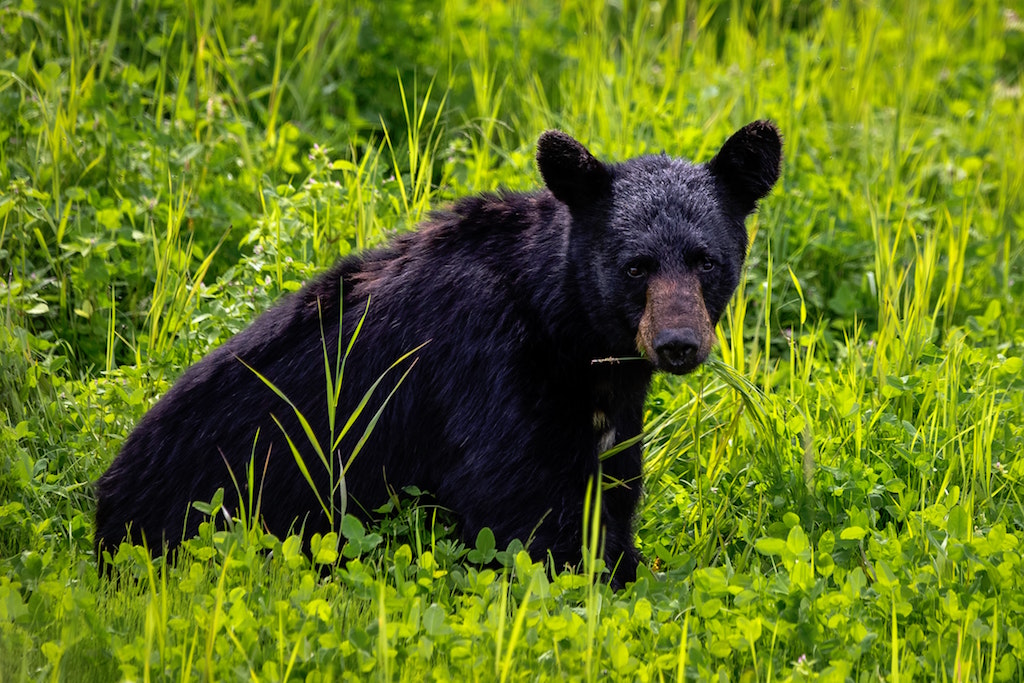 #12 What is the body temperature for Hibernating Bears?

Grizzly bears tend to live in more open areas, while black bears prefer densely forested mountainous regions, but there is still considerable overlap between the two. Grizzly bears are way more aggressive, significantly larger, and more powerful. While a black bear might be able to put up a fight, it’s not going to win against a Grizzly bear. However, remember that both animals are wild animals who most likely will fight to the death in deciduous forests.

Black bears are able to run at speeds of around 25-31 mph, but they cannot maintain the short distances for very long. When they are grazing, they tend to shuffle along slowly when walking on all fours or two feet. In fact, plump bears in heavy winter coats tire out particularly quickly in the following winter months.

#15 Where is the Best Place to see Black Bears in the USA?

There are many black bears in both the Katmai National Park and the Denali National Park in Alaska. Most people travel to Alaska to see these large animals, but they also sometimes see the brown bear and polar bears. 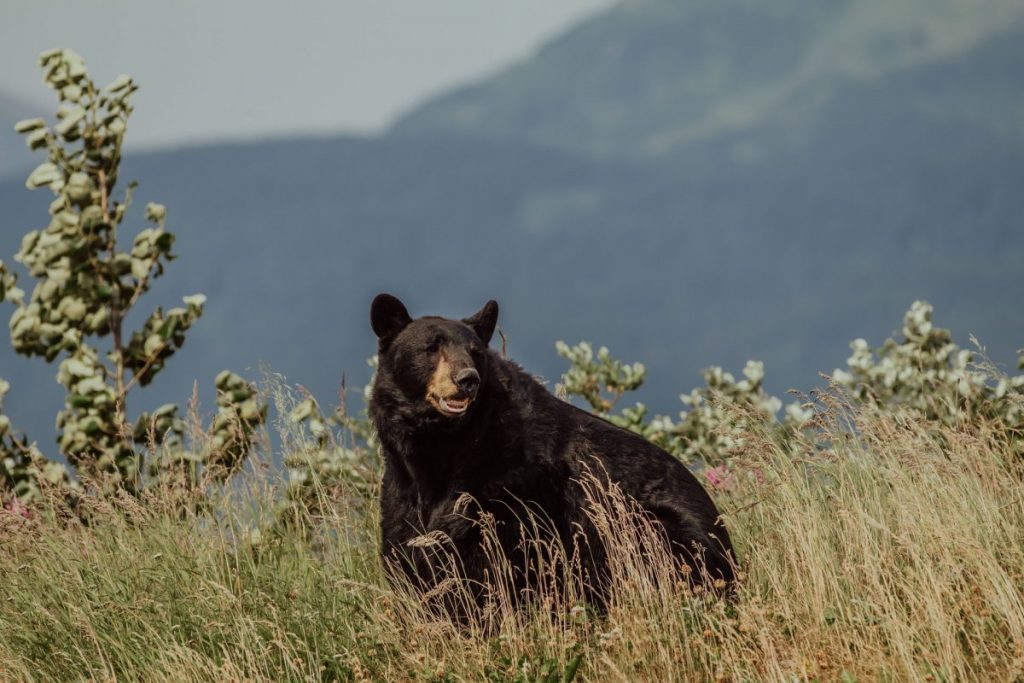 Anan Wildlife Observatory in Tongass National Forest in Alaska is also a place where you will see a lot of black bears. The Anan Wildlife Observatory is located 30 miles southeast of the town of Wrangell. Anan Creek has one of the largest runs of pink salmon in Southeast Alaska, which supports the high density of black and brown bears in the area.

Also, in July and late August, American bear species gather at a waterfall just below a viewing platform to feed on spawning pink salmon. Typically, you will see them standing up on their hind legs and stare out with their small eyes. For the best experience, stay overnight at Anan Bay Cabin, that way you will be able to see them in the wild.

The black bear is only listed on the Endangered Species List because it can sometimes resemble a small grizzly bear. As the United States Fish and Wildlife Service does not deem this species endangered, even though hundreds of black bears get killed each year by loss of habitat, hunting, and collisions with cars.

Habitat loss refers to the disappearance of natural environments of animals. The black bear might lose three major types of habitat loss. Habitat destruction, habitat degradation, and habitat fragmentation. All habitat loss has a consistently negative effects on biodiversity. Habitat loss is a causal factor in the decline of the black bear population, as their habitat can be destroyed by logging, mining, oil and gas drilling and land development.

Well, I hope this wrap up about black bears helps you understand the habitat, lifespan, and places to find and see black bears in Alaska. I throughly enjoyed my trip to see them.