Being in Ketchikan, Alaska and taking a “spirit bear photo tour” with Captain Jim Holston got me to thinking about the history of the Native Alaskan tribes. I was wondering about the meanings of the “black bear paw tattoo”, the bear paw print tattoo I saw on the totem pole carver’s arms, and bear culture in general. It seemed that every carver had a tattoo that had some deep spiritual meaning. 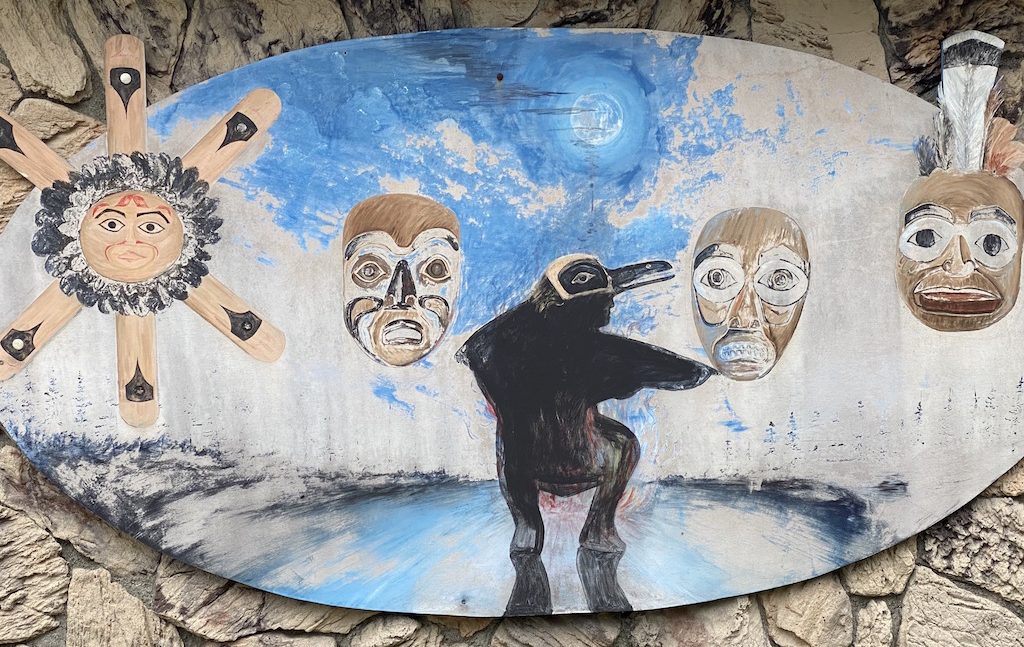 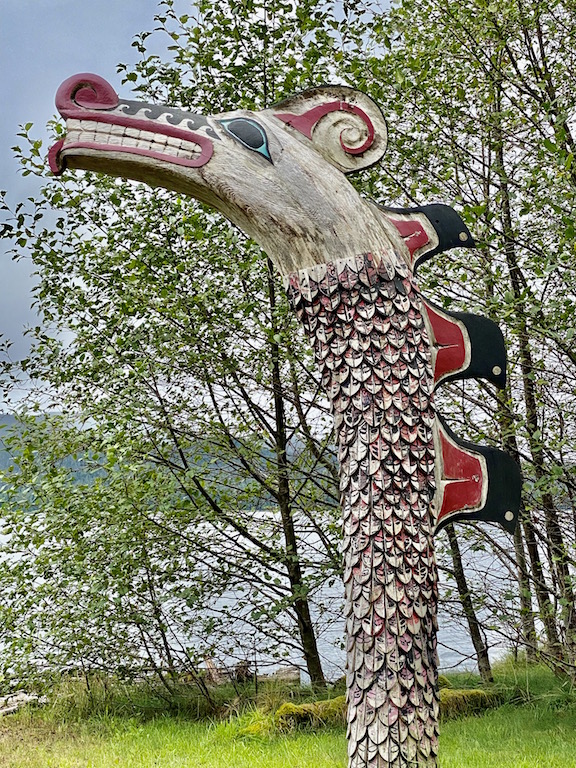 After visiting the Totem Heritage Center, we winded our way in our van towards the Potlatch Park of Native Totem poles. I was mesmerized by the ancient civilizations and culture of the Native Alaskan indigenous people. And since it was my first trip to Alaska (with Holland America Cruise Line), I was fascinated with Jim’s storytelling and ancient history of these Natives from so long ago. And their deep cultural meanings in regards to black bears, tribal tattoos, and the meaning of paw print tattoos. 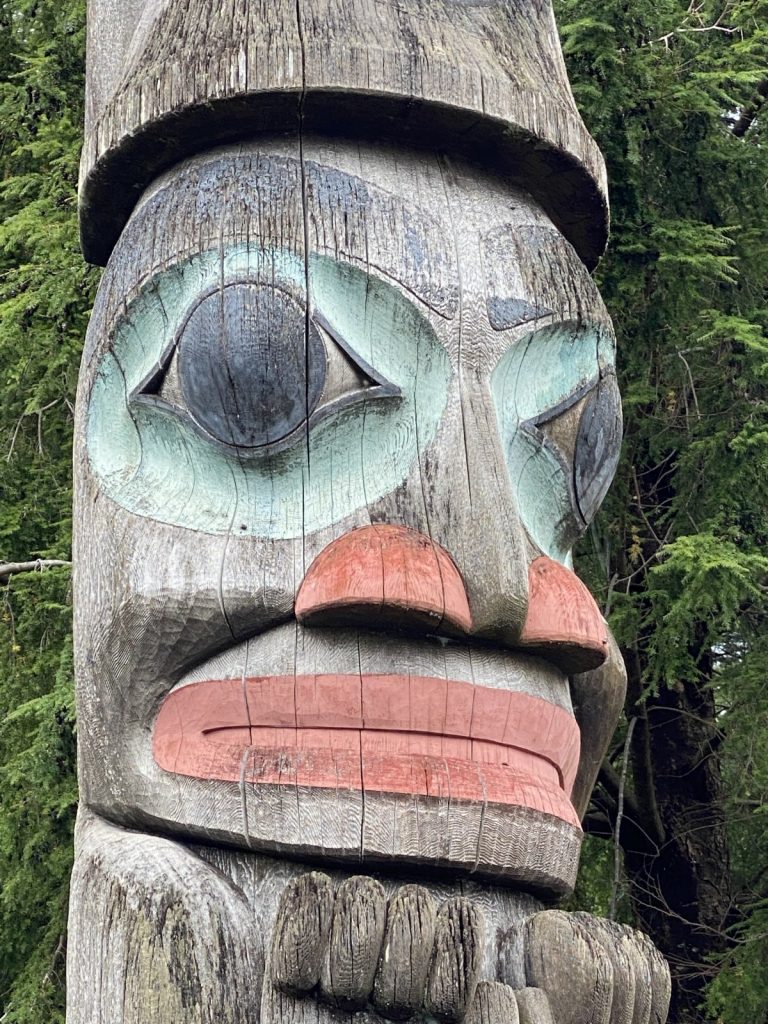 As we pulled into Potlatch Park and gift shop, plus museum off of Totem Bight Road in our van, Captain Jim was telling us about the history of Alaskan natives. And their ancient totem poles and customs. He parked the van and then we went to see the oldest totem poles that they have here in Potlatch Park.

The Potlatch park is a privately-owned park built on old Tlingit fishing grounds in southeast Alaska. This park’s purpose is dedicated to educating visitors on the Tlingit history and culture. Story after story, we heard about the native Indians and their deep love of their culture and way of life based on wild animals. 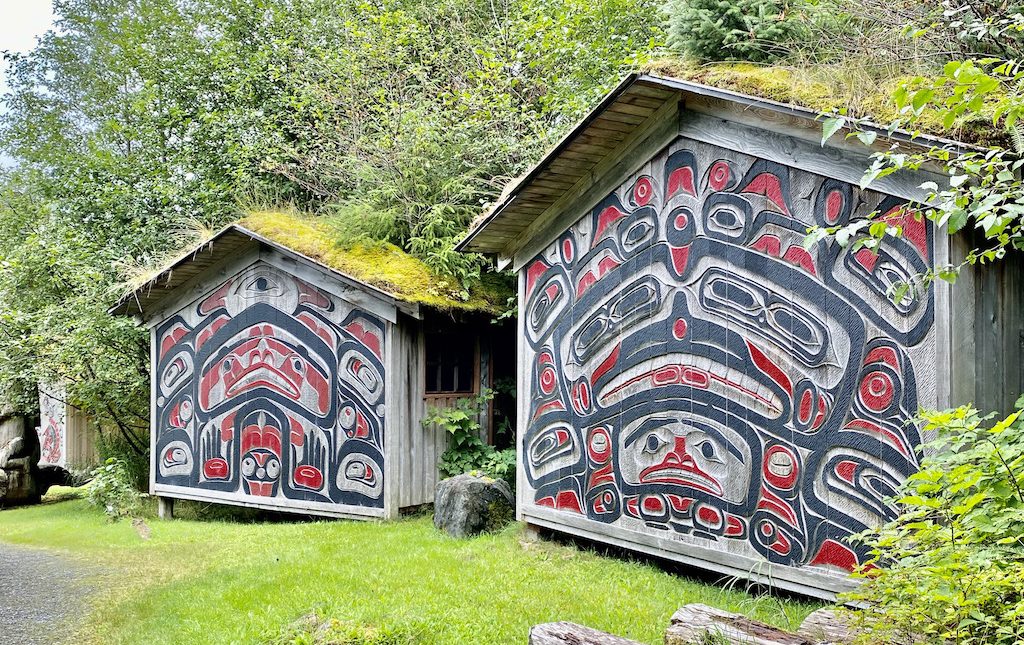 In fact, many natives look to the sky when carving their totem poles. Ursa Major is a constellation in the northern sky, whose associated mythology dates back into prehistory. Its Latin name means “greater she-bear,” referring to the nearby Ursa Minor, “the lesser bear”. Different people have different interpretations of the constellations.

As we entered the park, our first stop was the ancient totem pole, lying on its back in the totem carving shed. The carvings were interesting. Here, we are able to witness live carvers of Native Americans who work practicing the ancient art of totem pole crafting. Each large cedar log is filled with family histories and meanings with many a popular design. 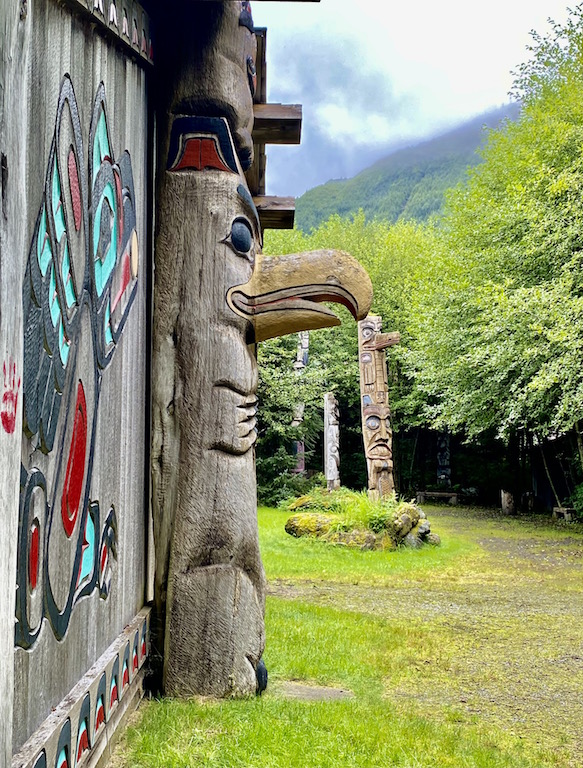 Plus, with the smell of cedar in the air, I was able to see the entire Totem Pole while it is laying down. Believe me, this was an eye-opening experience! I didn’t realize that Ketchikan has the largest collection of totem poles in the world, with many of them right here!

Totem Poles are carved to honor deceased ancestors, record history, social events, and oral tradition. They were never worshipped as a religious object.

From the killer whale to the thunderbird, to wolves, giant pandas, polar bears, teddy bears and even such figures as the Raven who “delivered the sun to the world” are here. Of course, every tattoo guy (ink lovers) loves to put special meaning in their totem animal for significance on their body.

Many of the carvers had bear tattoo designs. Because the bear is such a highly regarded animal within Native Alaskan culture, the bear print often represents a connection to the animal. That’s why men often use the bear print because they associate it with strength.

Each Totem Pole was about 34 feet tall, and it took up the length of the carving shed. Soon I began to look closely at the Totem Pole carvings. I soon realized that each of those carvings were made by hand from guys with their own bear tattoo ideas! 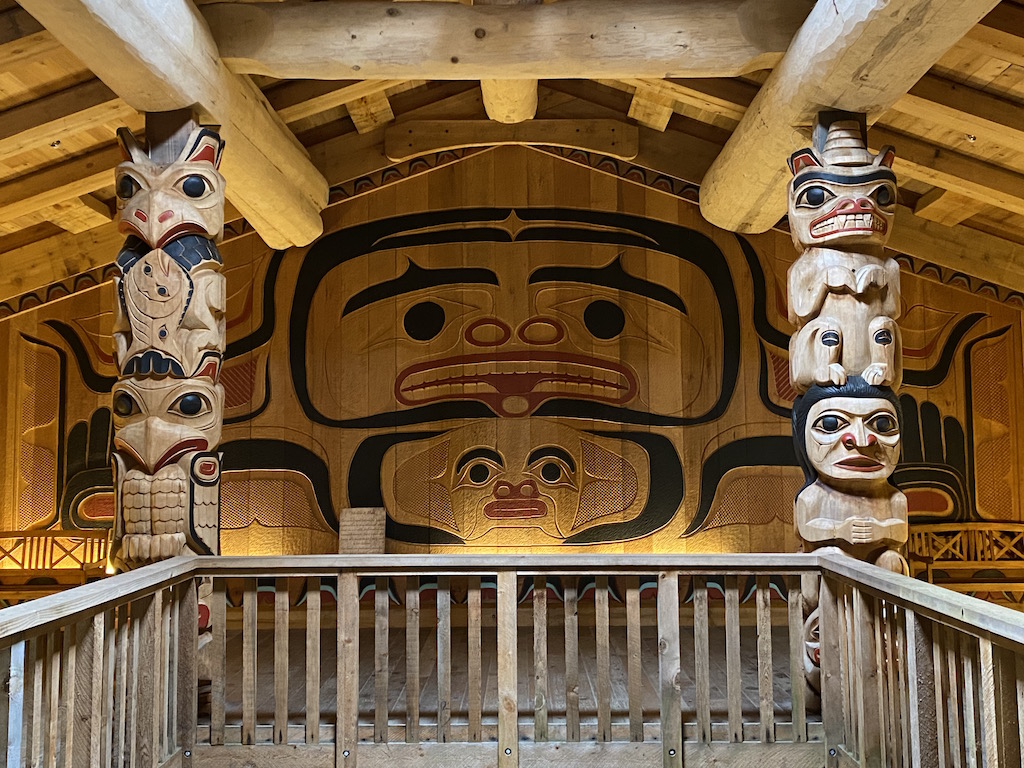 As we made our way pass the totem pole carving shed, we entered the clan or tribal houses. Potlatch Totem Park features a large group of houses flanked by four smaller ones. This provides a historical depiction of how the local tribes would have lived in the 1800’s.

Back then, this illustrates how families lived in a communal setting. These also provide educational resources to help those who are unfamiliar with the Tlingit mythology and different cultures of the Alaskan Indian. 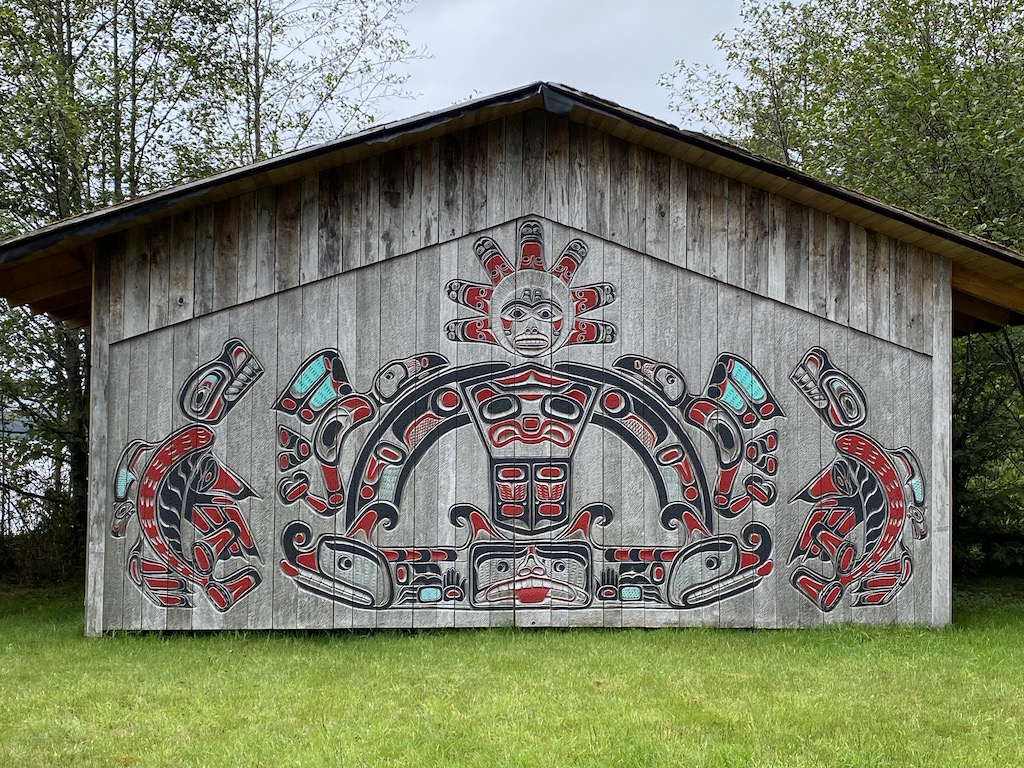 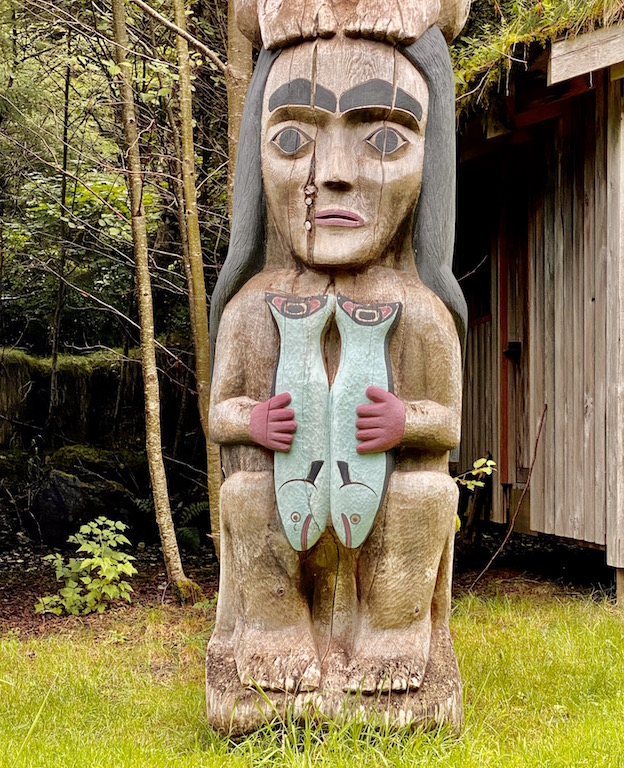 They believe in mother bears or wildlife animals being a symbol of good luck, a spiritual symbol or powerful symbols. They simply believe in nature and their native cultures, as they prefer to keep those histories alive through the totem pole.

Through the Doors – 100’s of Alaskan Carvings

Once through the doors, we found literally hundreds of native Alaskan carving throughout the property. We saw everything from polar bears, to black bear tattoos, to something that looked like a koala bear tattoos in black markings. I even saw a grizzly bear carving deep inside a few totem poles. 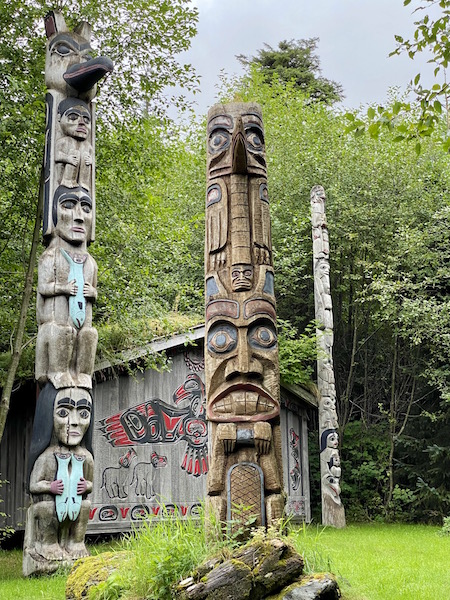 It appears that each carving has deeper meanings that what you might originally think. Inspecting the logs, I found a brown bear, giant pandas, and even a softer rendition of the bear claw itself. I found black colors that appeared to be cat tracks, small feline tracks, or possibly claw prints.

In the native American tradition, they believe in the spiritual world and the earthly incarnation of the great spirit. They follow the meanings of their belief system and inner strength believing that they have the warrior spirit, in many instances or the gentle spiritedness. Much of the spiritual world is full of Polynesian art. 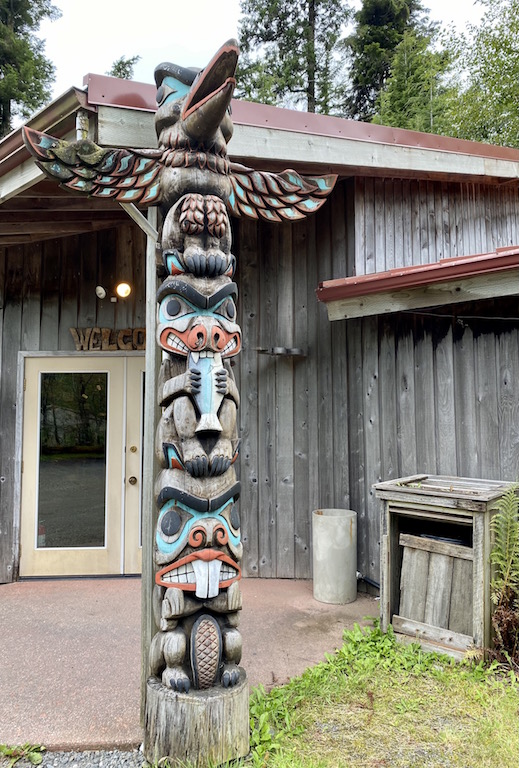 Meanings of the Bear Claw Tattoo

What I find so interesting is the meaning of the bear claw tattoo and other forms of tribal bear tattoo. I knew they used different kinds of bears in their totem poles, so it would make sense that people want to use bear claws on their body. I have seen many bear claw designs or a bear claw footprint used when choosing a tattoo. Many men choose to put it in the right place or the right path for maturity. 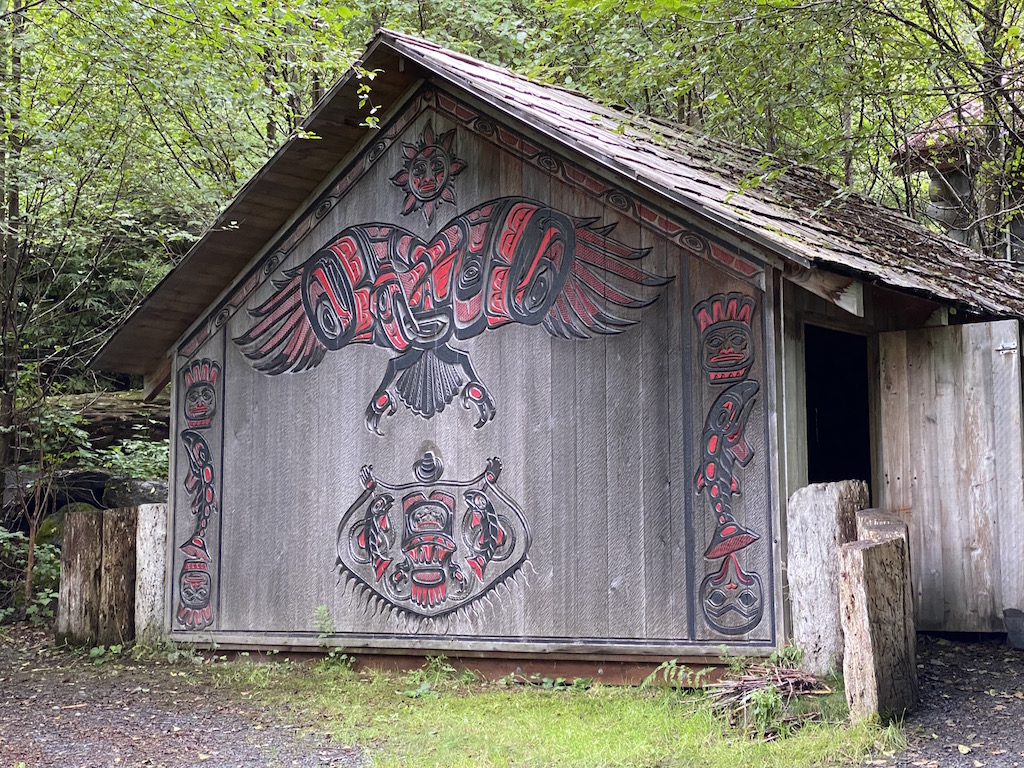 Such tattoos have common meanings that are parts of various cultures (even possibly Japanese culture). Many have different meanings or a deep meaning to the person who is wearing that particular tattoo. A lot of people have physical strength but most Native Americans have inner spiritual strength. I anticipated the bear tattoo meaning intuitively engraved on the totem pole in black colors, coming up with a few bear tattoo ideas of my own for my family. 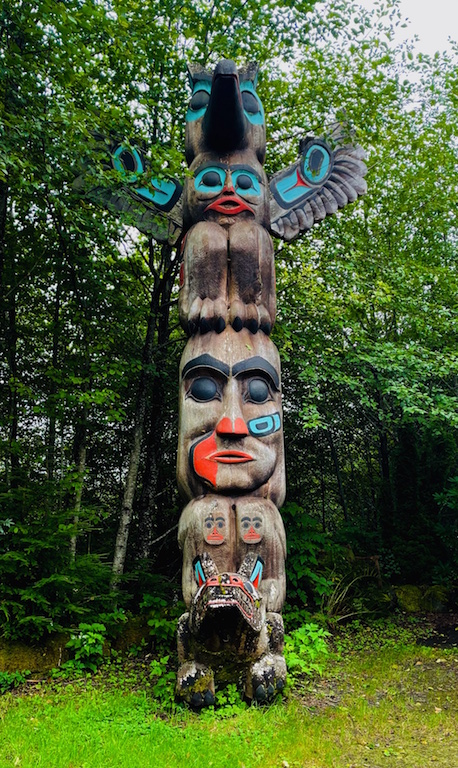 In the United States, there are many popular designs of common tattoo’s, but there are many simple versions of tattoos as well. But I believe that the native Americans have a deeper meaning to their tattoos than someone who just wants to get a tattoo. They go about it in different ways. Choosing different things to cover their body or parts of the body to create symbols of maturity.

I find that in the Inuit Culture there are many different symbols that help represent the natives. Things like a grizzly bear tattoo, a polar bear tattoo, or even tribal bear tattoos each represent something different from each individual. 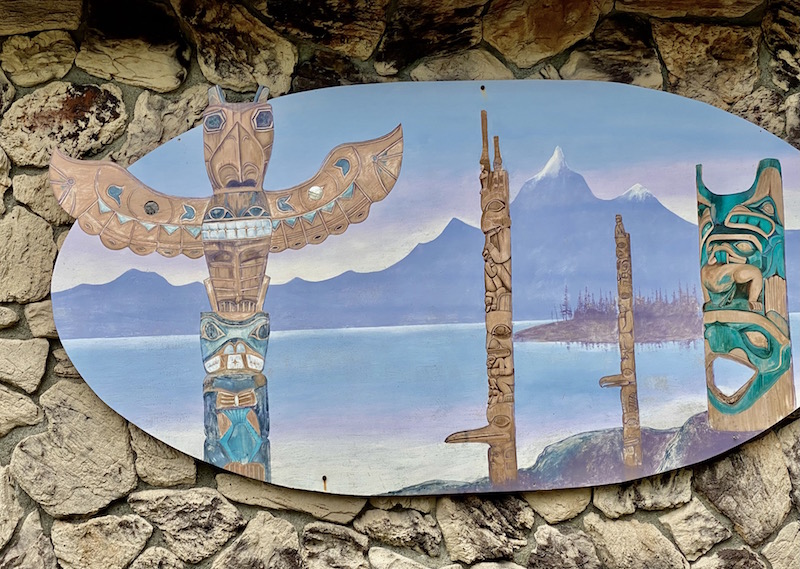 Many people want a particular incredible tattoo like a wolf tattoo or tiger tattoo that means something to them. Other people think of popular tattoo ideas, but can never seem to pick just one. 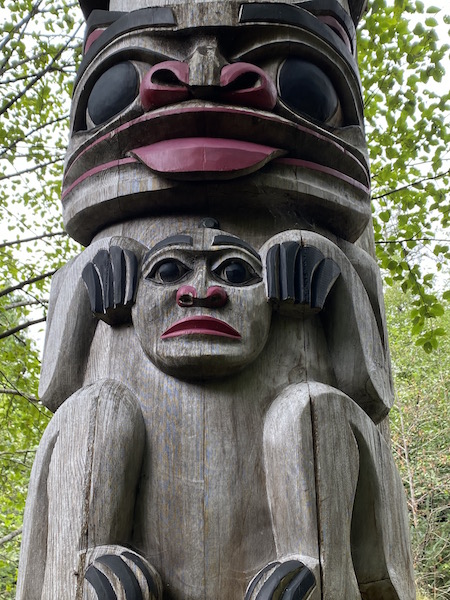 In fact, I have a friend who has tattoo of bear trail on her leg. And another friend who has a tattoos of paws on her feet. Many of my friends dream of getting bear paw tattoo designs, but can never seem to get one because they can’t make up their mind on which one to get or where to put it.

In fact, the way in which they are grouped is based on the broad cultural and language similarities of the people that live throughout Alaska. These groupings do not represent political or tribal groups, but instead traditionally define themselves based on their similarities or differences.

Around the turn of the century, George Bird Grinnel wrote about these encounters of at least three of the groups of five. He said “Most of the interactions were superficial and hasty.” Most likely because the Elders rarely spent more than a day in any port. Alaska Native life at the turn of the century included not only writings, but the first recordings of Tlingit songs and evocative portraits. 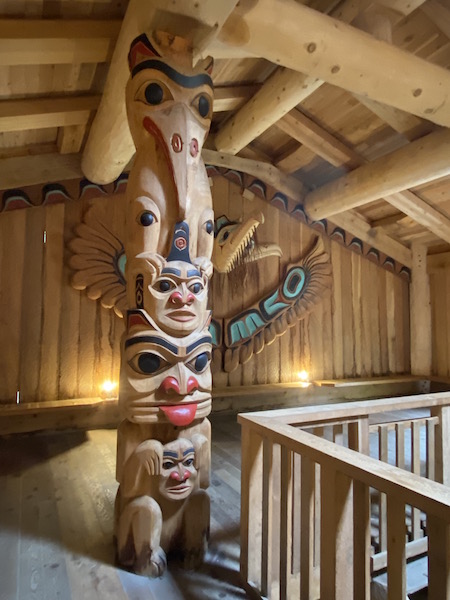 It seems the Aleut’s culture and history was difficult due to the impact of Russian contact. Divided into 9 subdivisions based on language, he also noted how difficult it had become for the Aleuts to maintain their way of life. Particularly since the increasing scarcity of the wild animals for which they depended on for food.

As for the Southern Eskimos, Grinnell’s describes them as bound to the sea for their food, clothing, and boats. He thought their future was “gloomy”, since fur seals were in serious decline and gold mining was on the rise. “Soon”, he thought, “they would lose their traditional way of life.”

As for the Tlingit and Haida Native Indians, they were well-known for their distinctive art that was represented in totem poles and carved objects. They shared similar social and cultural patterns; however, their languages were unrelated and they have distinct ethnic identities. Yet they had permanent winter villages from October to March.

Grinnell described the Tlingit’s as “a hardy race”. Living on the shore, bold mariners, and sea hunters, they are also mountaineers, familiar with the towering peaks, the dreadful cliffs, and the mighty glaciers of the coast. In their frail canoes, they venture far to the sea in pursuit of the fur-seal, the sea-otter, and the whale.” Grinnell must have recognized the value of the skills they had.

It has been a long time since I learned about the history of the totem poles. How a couple of totem pole stories tells me a lot about the meanings behind the family it represents. How totem pole carvers actually make their own totem carving tools, how they design the totem poles. or even how long they take to build. I watched how the paint used to be made, how the logs are chosen, and how the totem poles are raised upon completion by the Potlatch Park.

Basically, I learned how advanced the Alaskan Indian culture was and the meanings behind the stories and symbols of the totem poles. This really made me understand the native Alaskan culture and showed me how it really came to life! 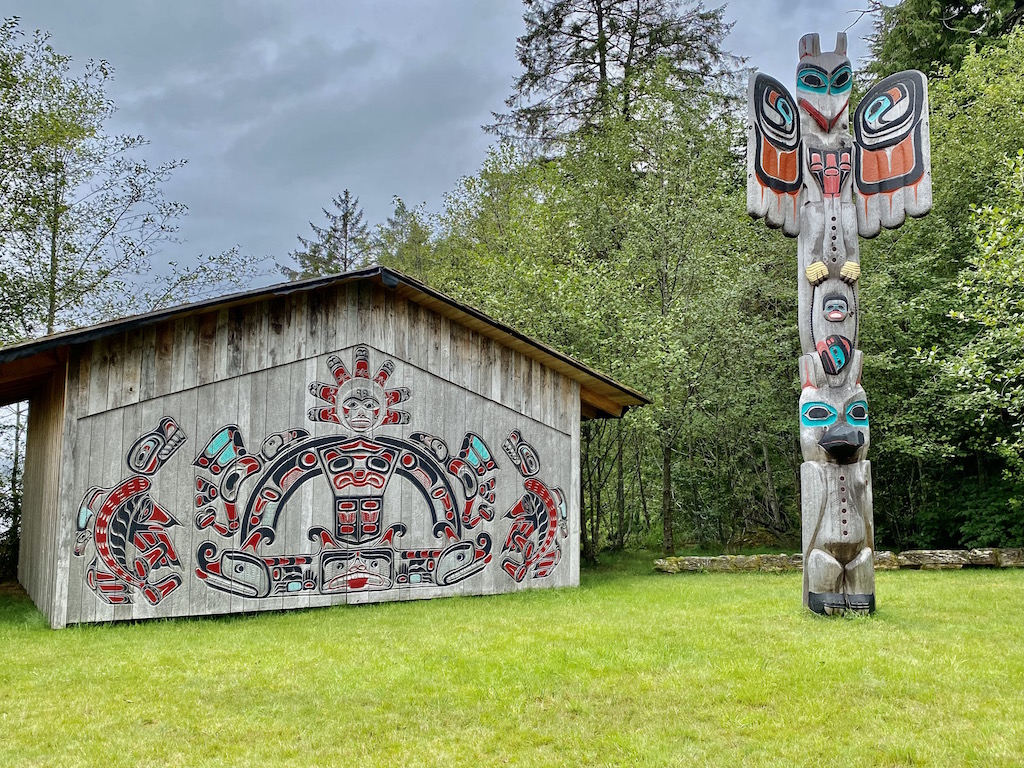