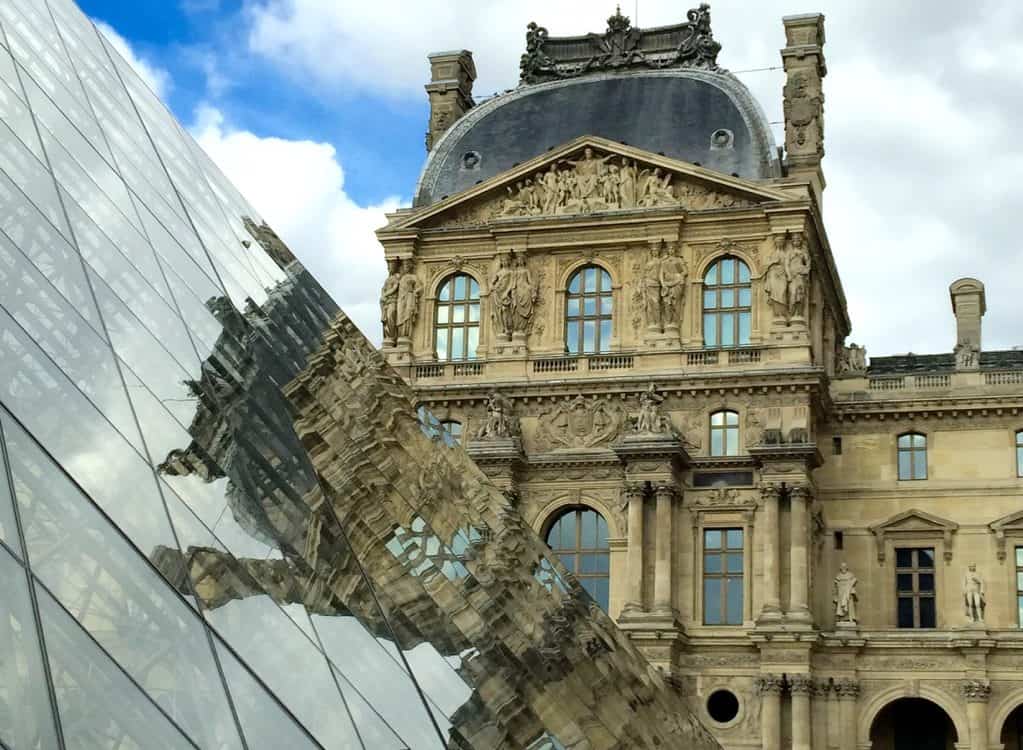 According to the World Tourism Organization, France is considered the world’s most popular destination for tourists. It has over 40,000 classified historical monuments, which is more than any other country in Europe! The national motto of the French is “liberty, equality, and fraternity” and you will certainly feel a part of the family among the locals. The French are responsible for numerous inventions such as the stethoscope in 1816 by Rene Laennec and the influential adoption of the metric system by Gabriel Mouton in 1793. 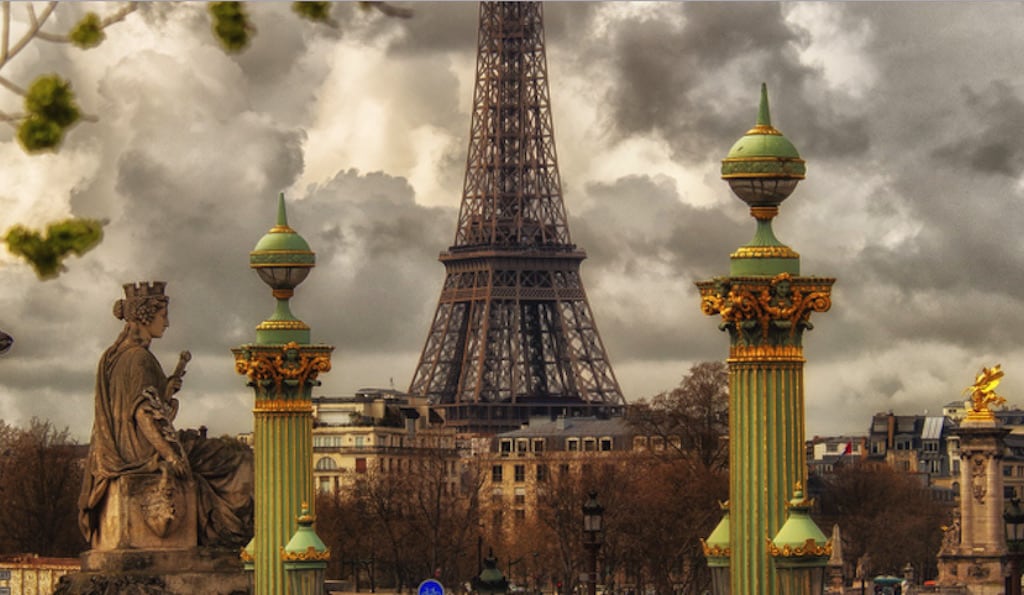 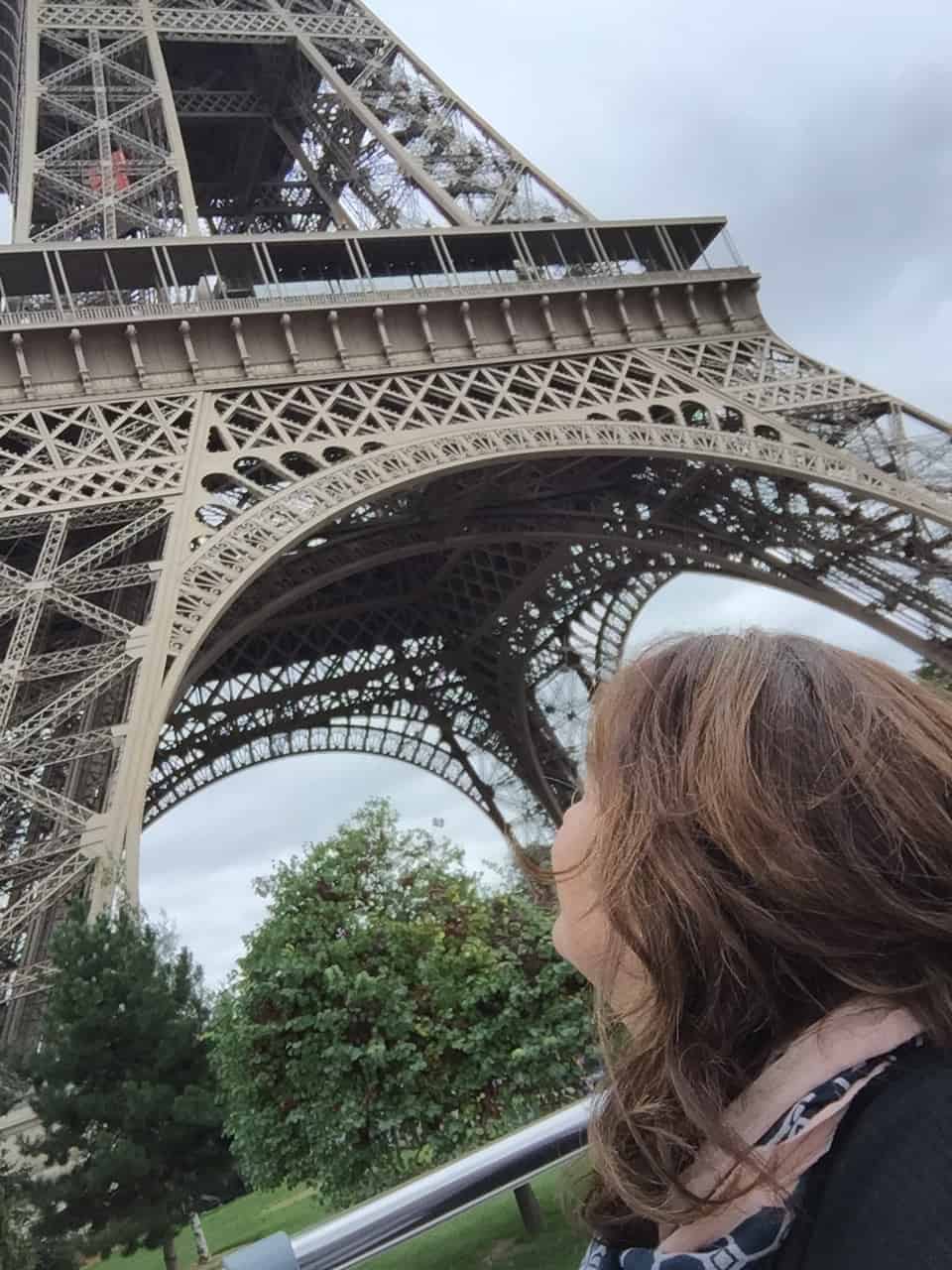 One of the world’s most visited and most recognizable buildings is the Eiffel Tower. The Eiffel Tower stands at 1,063 feet from the bottom to its tip. It was opened to the public in 1889. This stunning tower once held the record for being the world’s tallest structure for 41 years until the Chrysler building was built.

Although this immense tower was named after architect Gustave Eiffel, the original architect of the tower was Maurice Koechlin, who was an employee at Eiffel’s company. According to the original contract, this tower was supposed to be demolished in 1909, but the tension of WWI paused the demolition. Lucky for us, the Eiffel Tower still stands today and we can admire its architectural beauty. 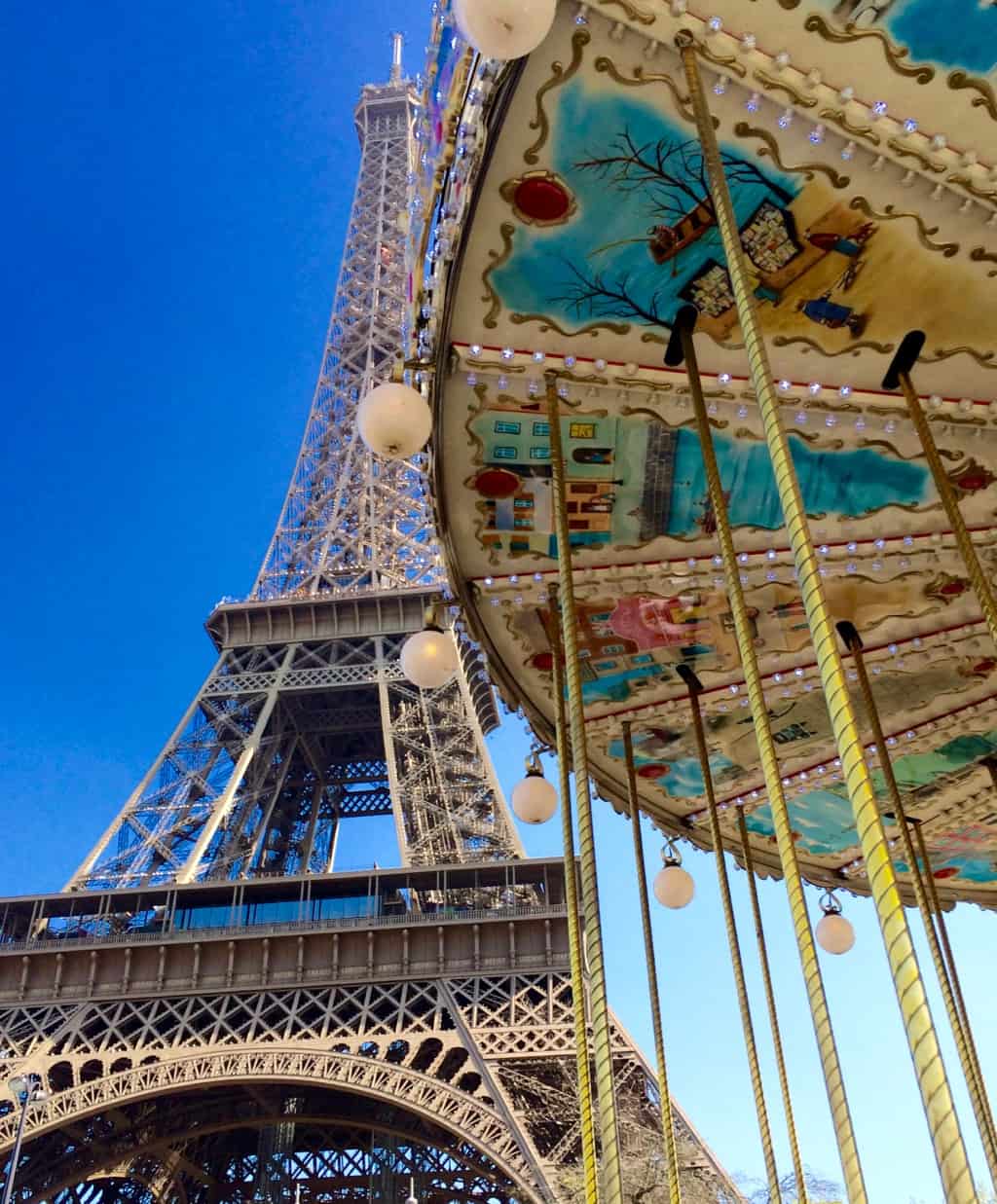 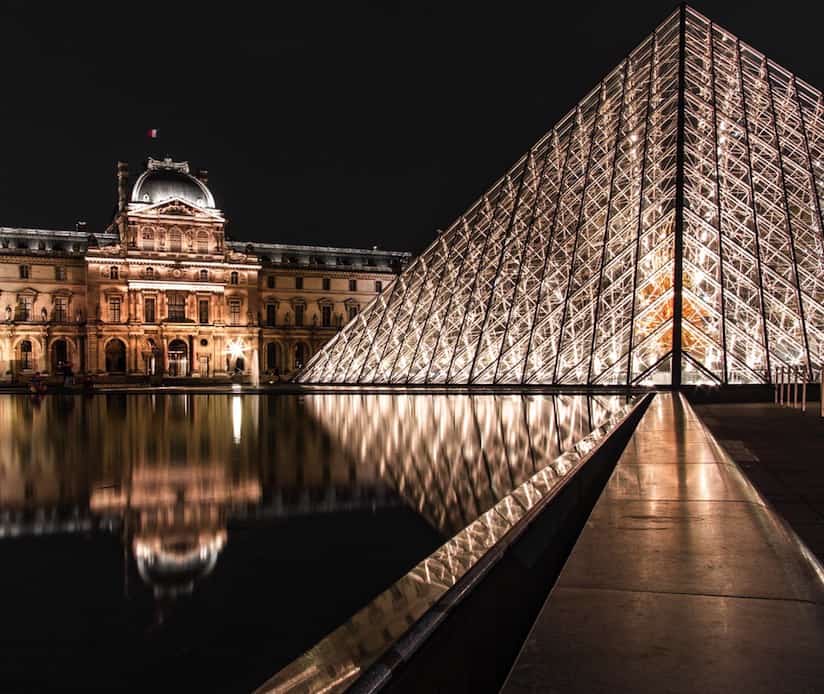 The Louvre is another famous French landmark, that welcomes over 9 million visitors per year. This is the biggest museum in the world with over 380,000 pieces and over 15 acres of galleries. The Louvre museum was built in 1190 and was used as a fortress, and then a royal palace in the 16th century. It wasn’t until 1793 that the Louvre became a museum. One of the most famous paintings at the Louvre is Leonardo da Vinci’s, Mona Lisa. You will be pleased to find antiquities from different periods in time, Islamic art, paintings, drawings, sculptures, and decorative art. 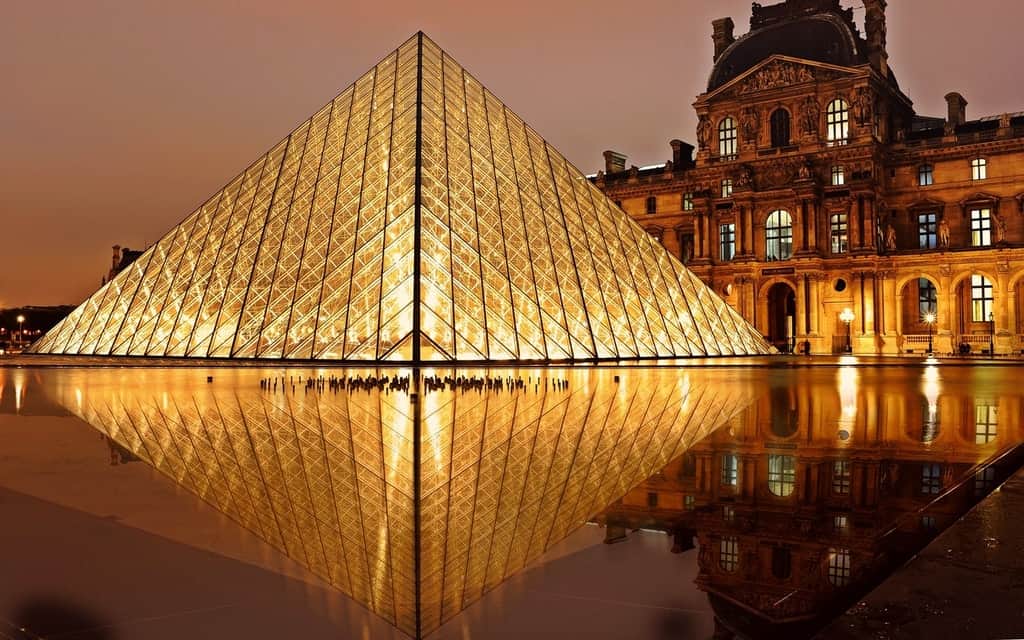 UNESCO granted the Pont du Gard a World Heritage Site for its excellent preservation of this ancient Roman aqueduct. It took almost 50,000 tonnes and five years to build this landmark. This bridge had several uses over the years such as a toll road and road bridge. If you want an up-close and personal history lesson, then I recommend visiting the underground museum of the Pont du Gard. 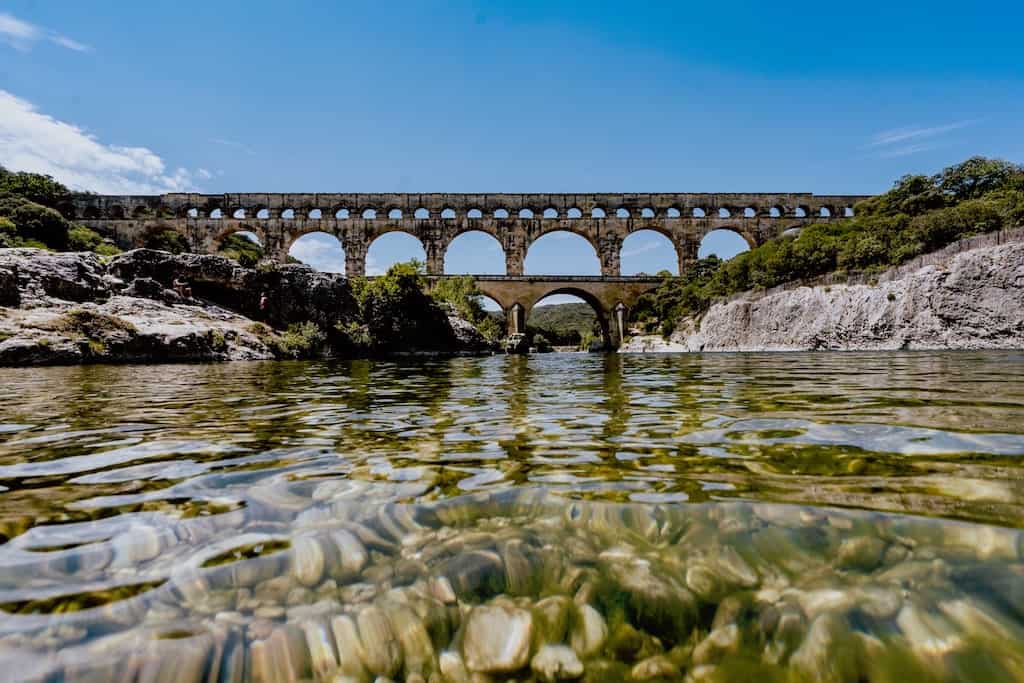 The Notre Dame is a famous building that has hosted many special events since its opening in 1250 (87 years after construction began). This large cathedral stands at 226 feet and is the most visited monument in Paris. Notre Dame was built on top of an ancient Roman city and two old churches. The Gothic-style is predominant in most of the architectural points of Notre Dame.

The interior of the cathedral is stunning due to the ornate sculptures and the 13the century stained glass windows. I recommend viewing the “Crown of the Thorns”, which is the cathedral’s most prized and sacred artifacts. Unfortunately, in 2019, a fire broke out and destroyed parts of the spire and its roof. Thanks to the great French population though, donations were made to help repair this beloved monument. 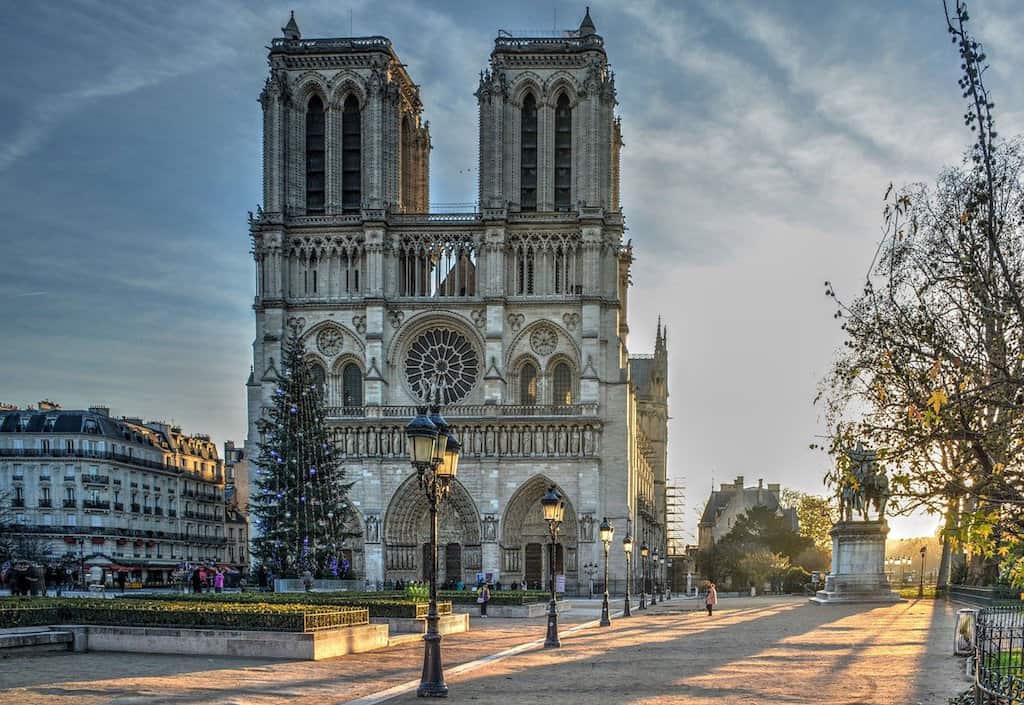 If you are looking for another magnificent cathedral in Paris, then you will certainly find one, the Sacre-Coeur (aka- Sacred Heart). This cathedral is 272 feet high and 115 feet wide. After 39 years of construction, this cathedral was completed in 1914 but was not consecrated until after WWI in 1919. This cathedral was created in honor of the generous heart of Jesus Christ. One of the most stunning parts of this landmark is the “Savoyarde”, which contains the world’s heaviest bell at 21 US tons. The main entrance is adorned with bronze doors, foliage designs, and a Roman-Byzantine architectural style. 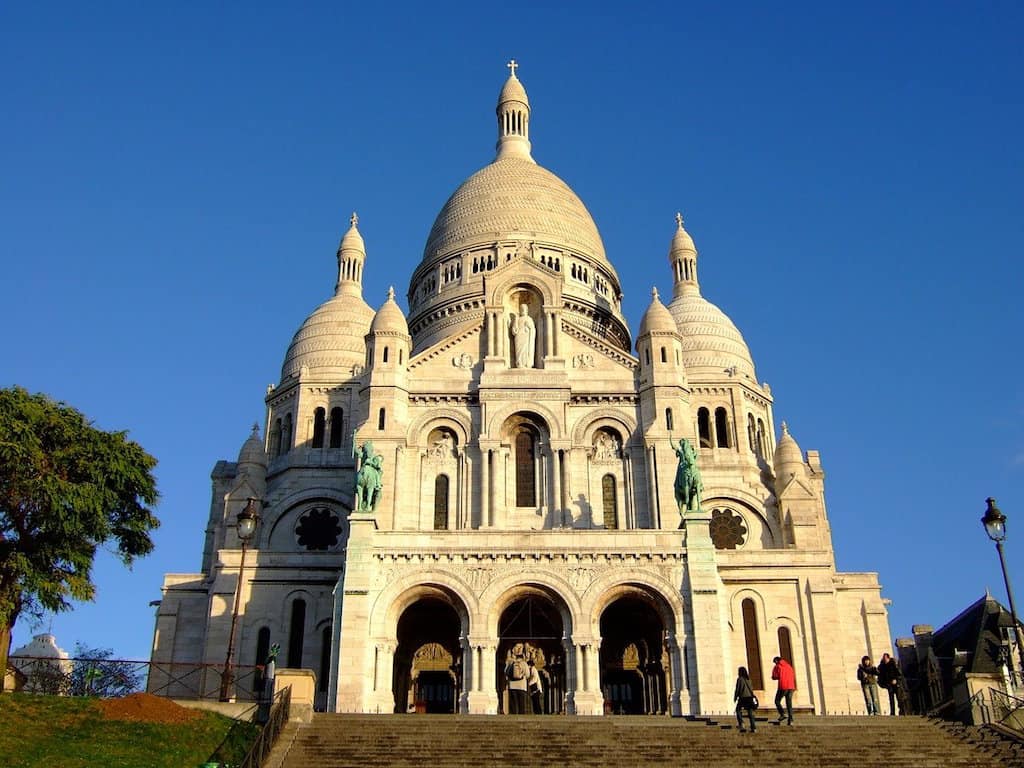 The true heart of the capital city is the Arc de Triomphe, which was built from 1806 to 1836. This is a gorgeous monument that connects 12 main roads in Paris. Different sculptures were chosen to create this arc, which can be seen in each of the four pillars. The first pillar by Francois Rude was created to honor the French First Republic. The second pillar was designed by Jean-Pierre Cortor and expresses the victory of Napoleon. The third pillar by Antoine Etex honors the War of the Sixth Coalition. The fourth pillar by Antoine Etex and depicts the commemoration of the Treaty of Paris. 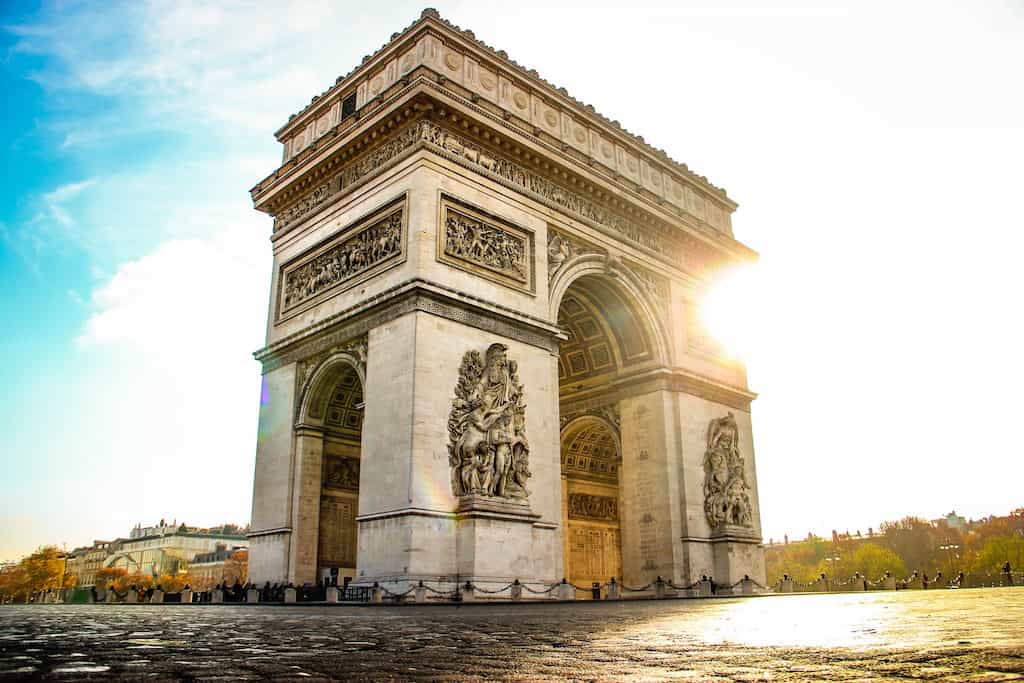 If you head outside of Paris, you will find the former royal residence of the (extinct) French monarchy, the Palace of Versailles. This palace was built in 1631 under the royal order of King Louis XIII. There are at least 2,300 rooms of this palace, although not all are open to the public. The interior of the palace has a hall of mirrors, a dining room, kitchens, and stunning artwork. The true beauties of this palace are the gardens, which include 1,400 fountains and over 400 sculptures. 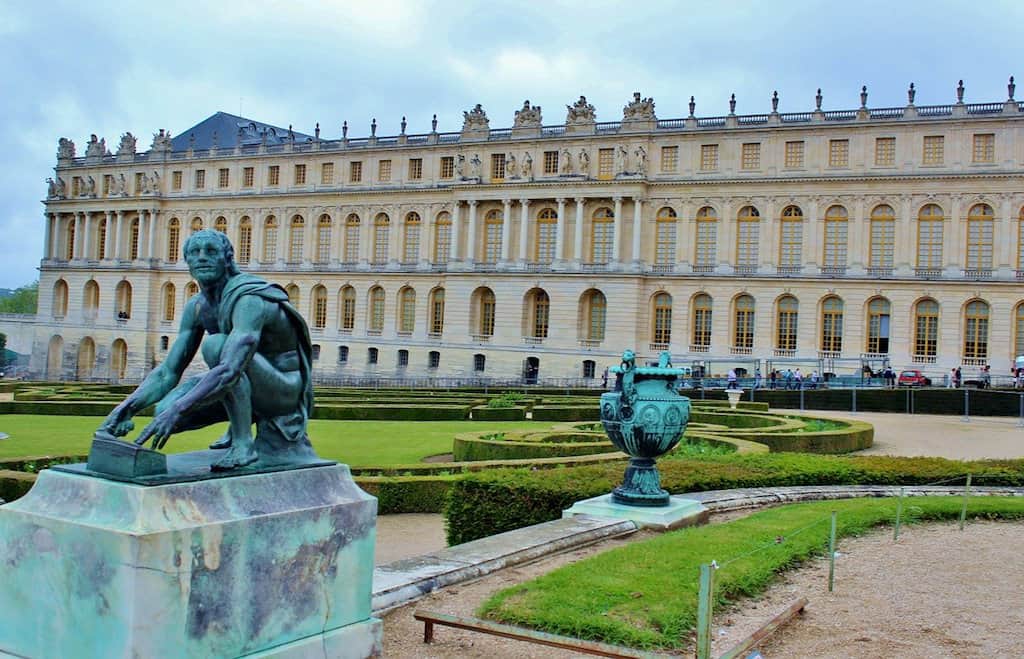 Along the Couesnon River, lies the marvelous Mont Saint Michel in Normandy, France. This is a famous French landmark because it hosts as a symbol of the Catholic religion and dedicated to the Archangel San Michele. This landmark was designed by William Volpiano and was a self-containing city for at least 50 years. 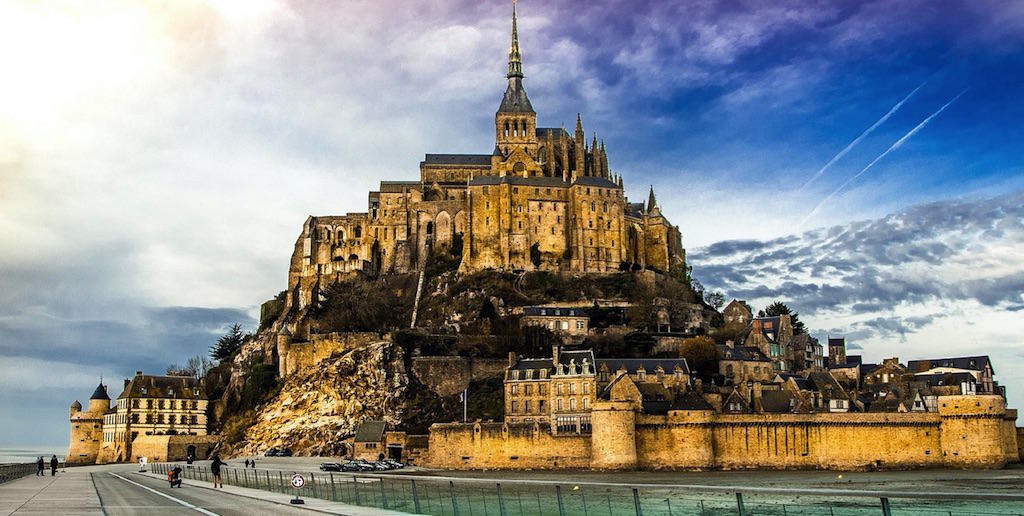 If you are looking to head outside the crowded city of Paris, then a trip to the Chateau de Fontainebleau is where to go. Inside the palace, there are 3 chapels and four museums within the palace, which are: the Empress’ Chinese museum, Napoleon I museum, Paintings Gallery, and Furniture Gallery. The outside gardens are particularly breathtaking with more than 130 hectares of park. There are several gardens such as the lakeside pavilion, the English garden, and the Queen’s private garden. 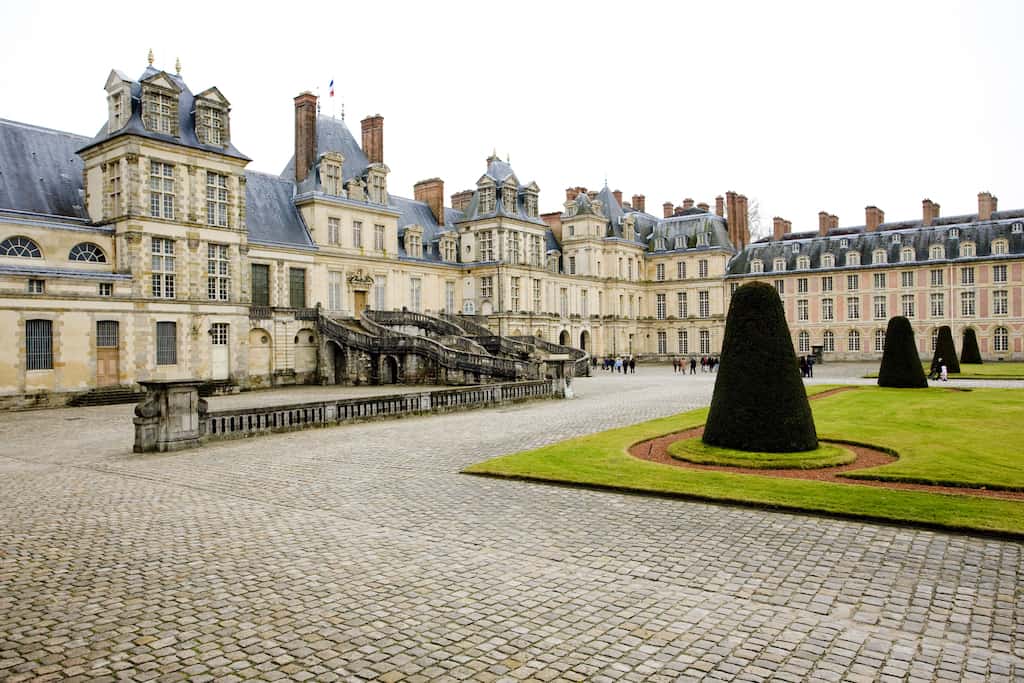 At 15,777 feet, Mont Blanc is the highest mountain in the Alps and second highest in Europe. This mountain is named, “White Mountain” because it is covered in glaciers and is snow-capped. The first time this mountain was climbed (on record) occurred in 1786 by Jacques Balmat. More than 19,000 people climb this mountain per year, who often use the popular route, Voie Royale. 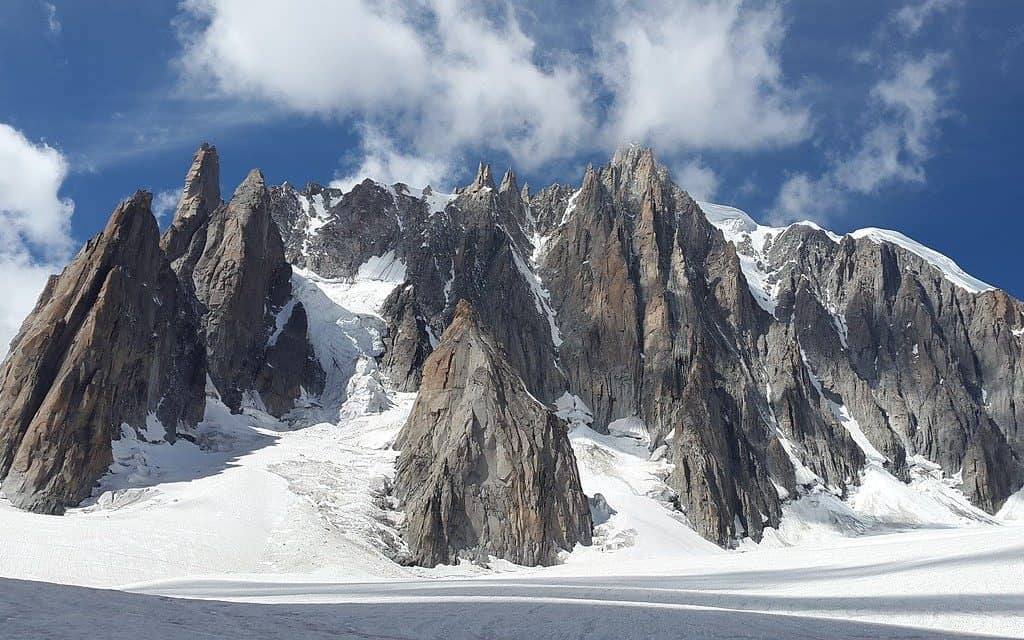 One of the modern-day famous French landmarks is the cable-stayed bridge, Millau Viaduct. This is the world’s tallest bridge, with the highest point reaching 1125 ft. This bridge was completed in 2004 after 3 years of construction. This large bridge was designed by Michel Virlogeux and links the following autoroutes: A75, A10, and A71. In 2006, the Millau Viaduct was awarded the Outstanding Structure Award. 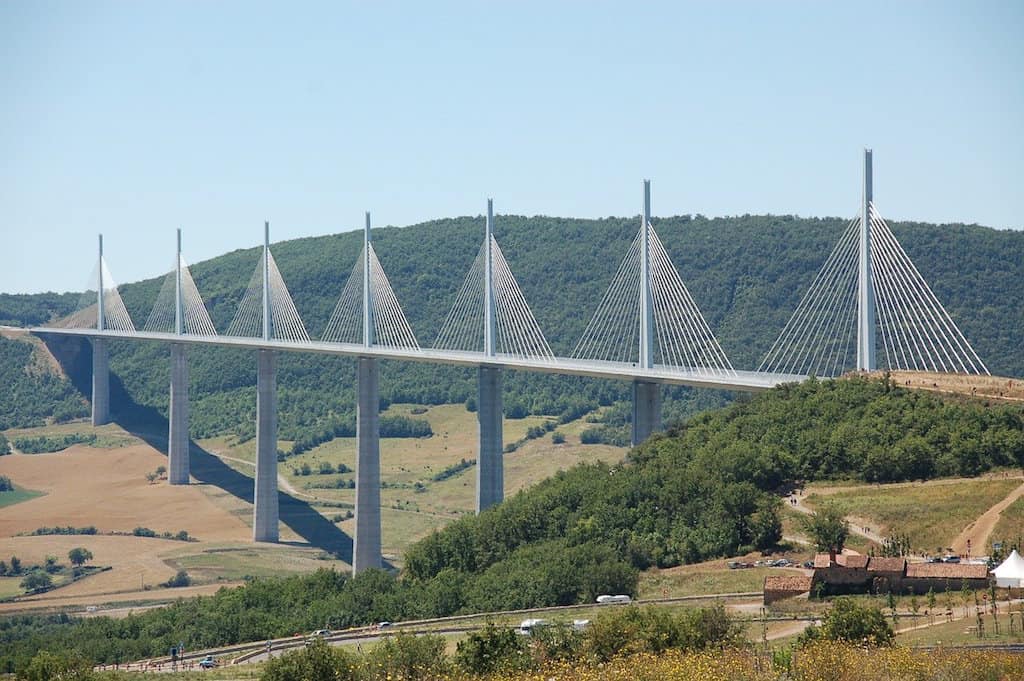 The Abbey of Fontenay is located in Burgundy and was built in 1118. This abbey is one of the remaining structures of the Cistercian monks. The interior of this abbey includes a church, dormitory, a bathing complex, and the workplace. This abbey was built with stones from the local area and has a Romanesque-style. 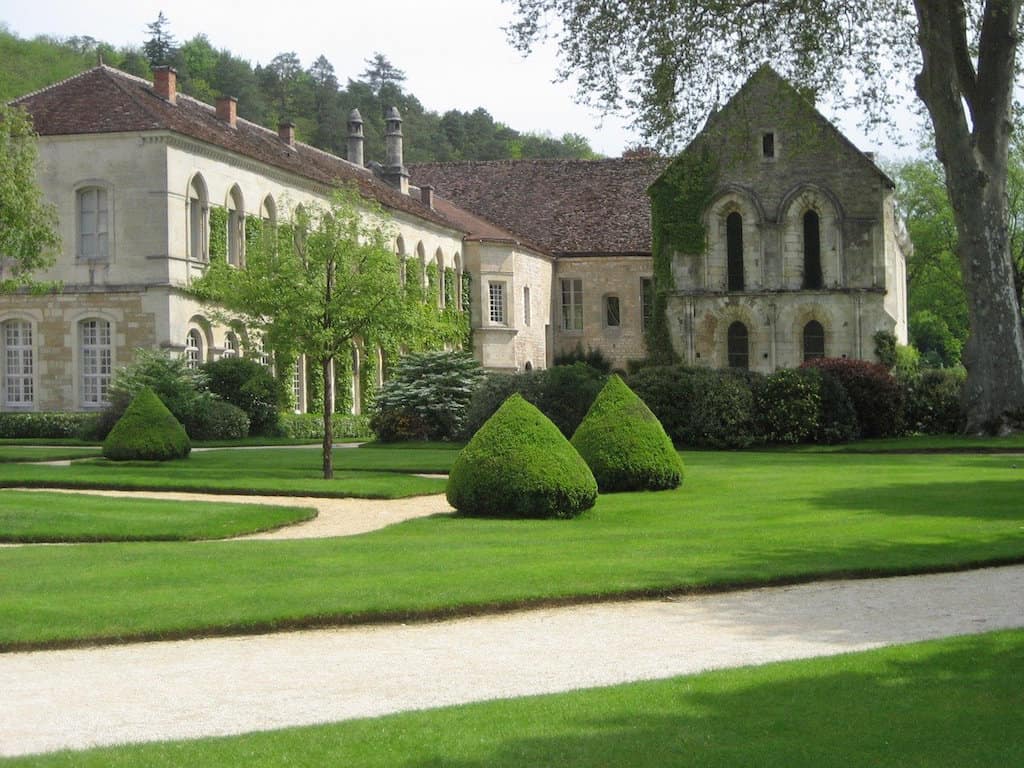 The Obelisk of Luxor is the oldest monument in Paris, which stands since 1833 in the middle of the Place de la Concorde. This obelisk was brought from Egypt to France by King Louis-Philippe I in 1833. It is made of red granite stone and stands at roughly 74 feet tall. The most interesting part of this pedestal is the carving of four baboons, which symbolized “adoring the sun”. 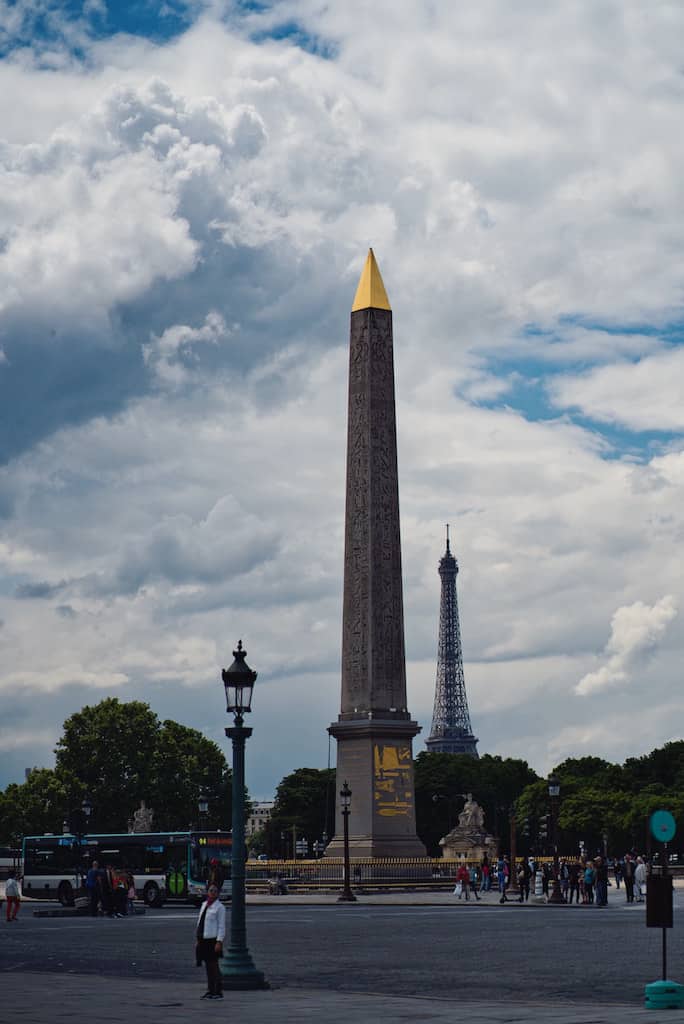 The largest beach to be invaded on D-Day was the Omaha Beach in Normandy. This beach is overlooked by 30-meter high cliffs and has five exits. It is a difficult beach to invade and Americans were given exactly that task. Click here if you want to book a tour to visit the spot of the most famous events of WWI. The tour also includes a visit to the memorial cemetery. 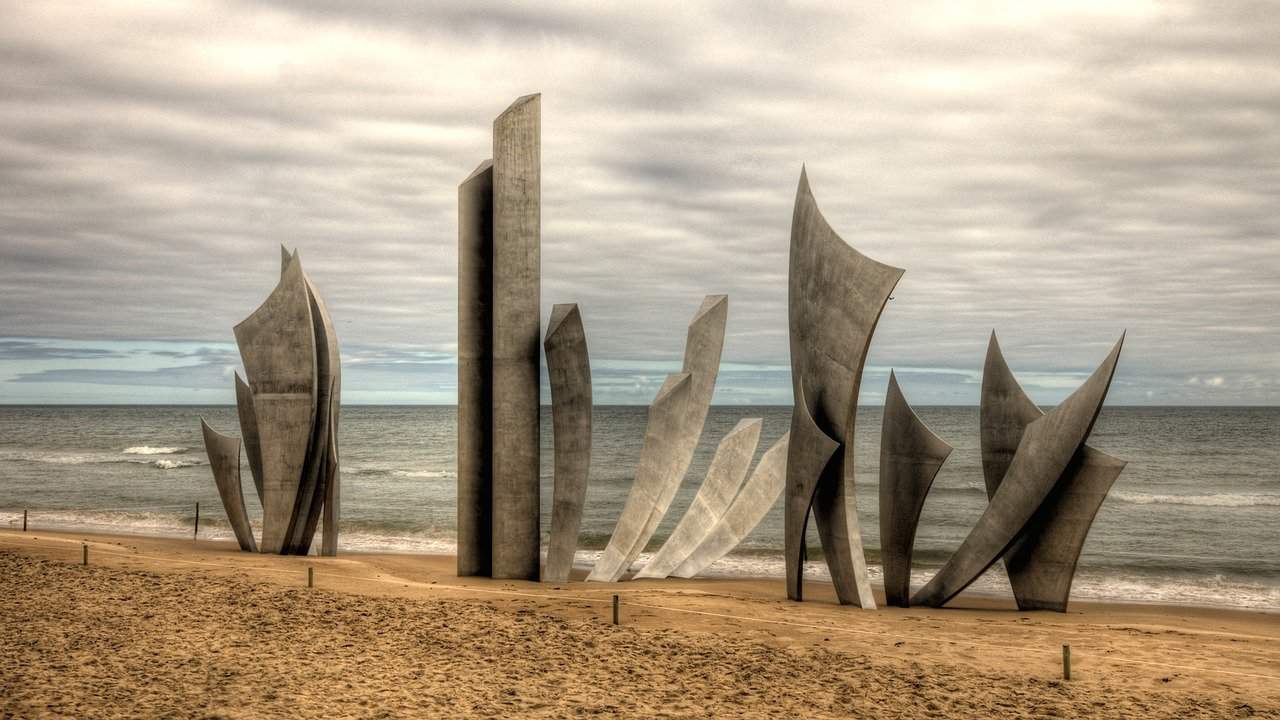 One of the most important natural landmarks in France is the Dune du Pilat. This is a colossal sand dune that reaches 360 feet high. The best time of day to visit this dune is the evening because you can catch a glimpse of the changing light from the sun. It is located approximately 37 miles from Bordeaux, France. 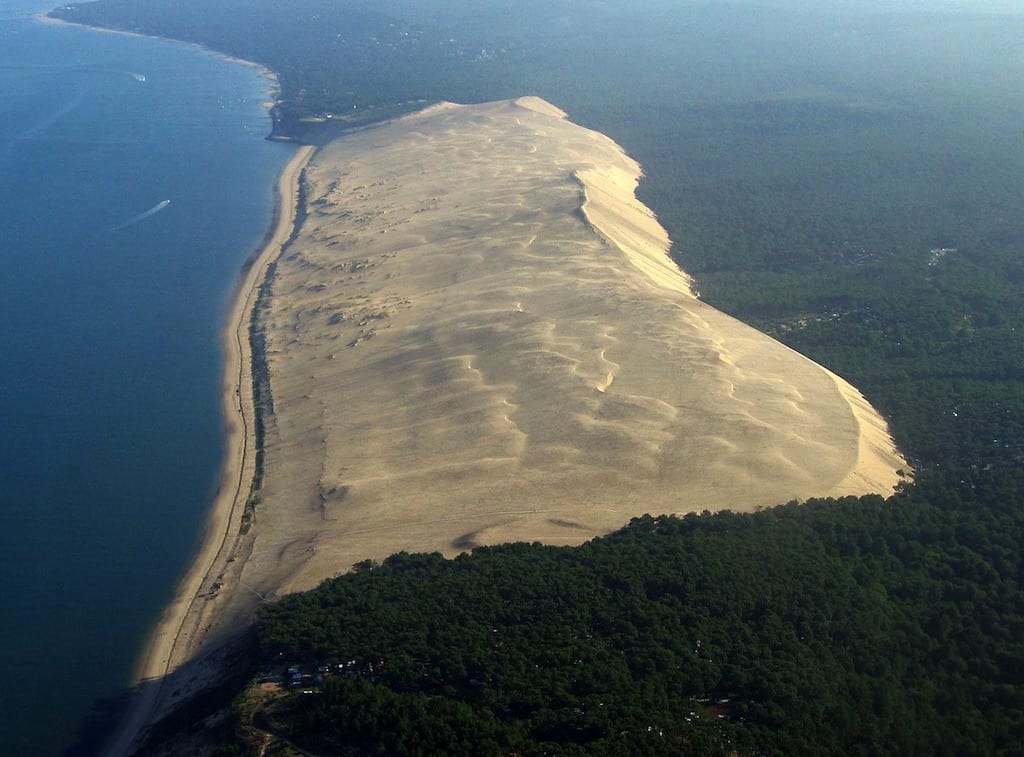 History buffs are surely excited to have read about these 15 famous French landmarks. Each of these landmarks takes you to a different place in history to admire the beauty and delicate state of each landmark. I hope you enjoy your next trip to France; I know I’ll be revisiting all these wonderful landmarks again very soon!