The walls to the city at night

Are you a fan of walled cities? If you are, then you should head to Avila, Spain in the Castilla y Leon (Castles and Lions) province of Spain. Located just about an hour and a half drive from the Madrid Bajaras airport, it’s a city waiting to be discovered. This walled city is also known as the “City of Knights” which dates back to the 5th Century BC.

The Most Charmed City in Spain

When you visit, you will see why in 1985 the city became a UNESCO World Heritage site. 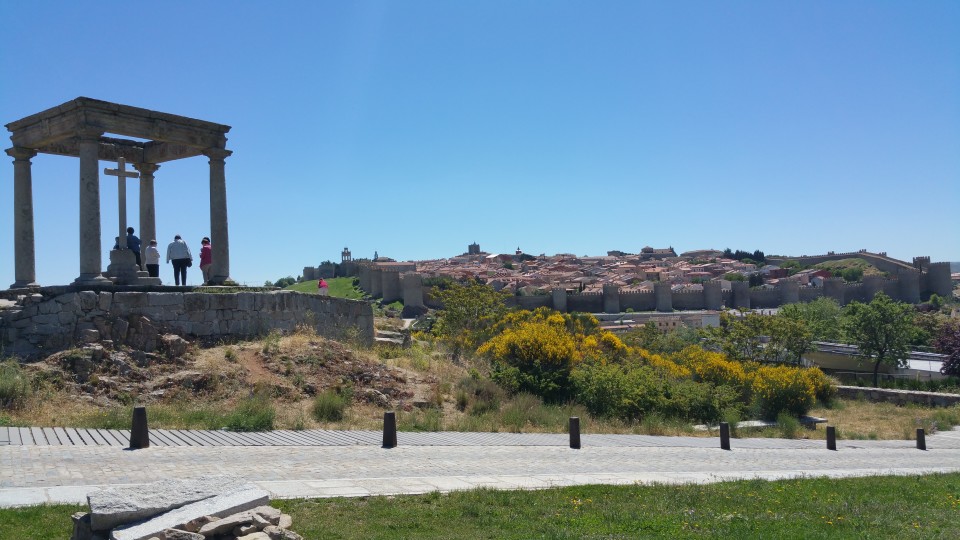 Avila is the birthplace of Santa Teresa de Avila. This year, 2015, is 500 years since her birth on March 28, 1515. For this reason, the region is having many celebrations, as well as museums exhibits, one of which is in Avila. It is called the ‘Teresa de Jesus at the Provincial Archives’ and details many original documents showing her life and death. 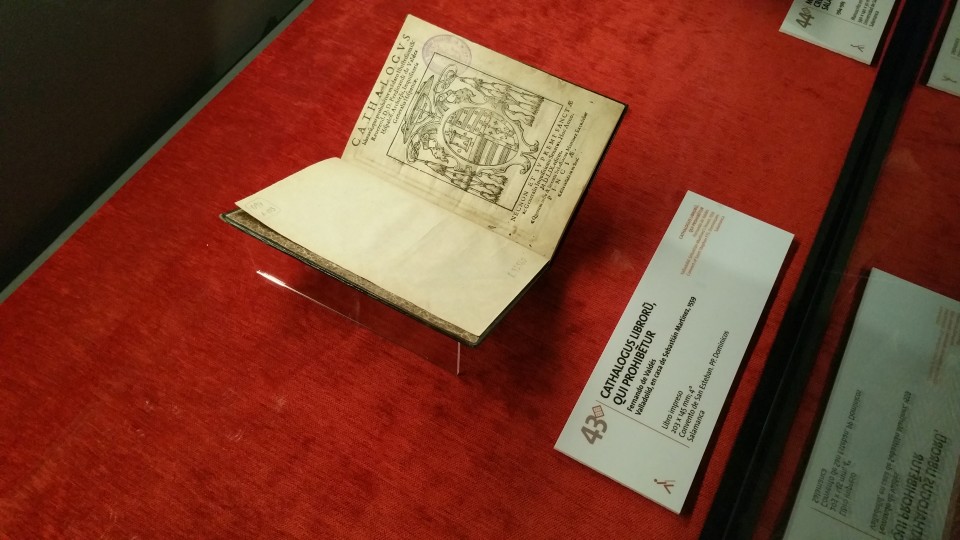 Even if you are not Catholic, you should take a look at the exhibits about her life in the Centro de Interpretación de la Mística, Iglesia Convento de Sta Teresa. In the early days, living inside the walls was reserved only for royalties, but all that has changed today. You will find beautiful restaurants, churches, hotels, shopping, and apartments all within the city walls. 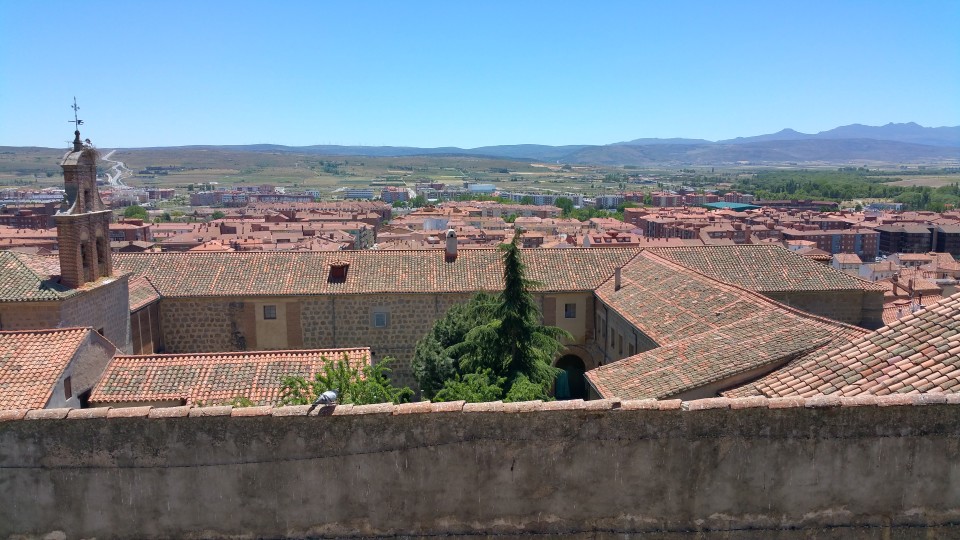 Outside, the sprawling city with its red top buildings is a sight to behold, especially when you take a tour walking along the top of its walls.

While there are many hotels in the area, I stayed and will highly recommend the Hotel Palacio de Los Velada.

I was walking by and looked through the window at the interior courtyard and said to myself:

“That is such a nice hotel, I’d love to stay there.”

Then our guide said,

“That’s the hotel we are staying;”

Located next to the Cathedral of San Salvador, the hotel, a 16th-century palace, was restored in 1995 and retains the essence of the original palace. The interior of the rooms retains the old wooden flavor of that era as well as the high ceilings of its time. The hotel does have a suite, but unfortunately, it was occupied at the time so I did not have a chance to see it. 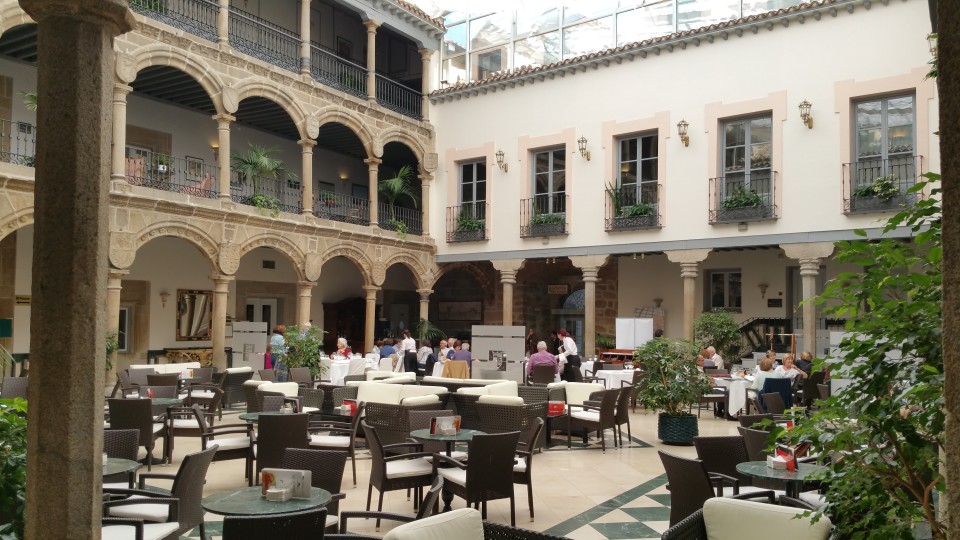 Here are the hotel details if you decide to stay there:

It’s Spain, so there is no shortage of places to eat and drink inside and outside of the wall. Our first stop was Restaurante La Bruja (Hotel Las Leyendas) which is just outside the wall. The place comes with a spectacular view of the surrounding area, plus a view of the wall to the city. As with all Spanish meals it seems, lunch was served with a bottle of red wine (Portia Ebeia Roble 2013). Among the various items, we ate was Iberian ham, which is the highest quality ham in the region. And of course beef also from the region. 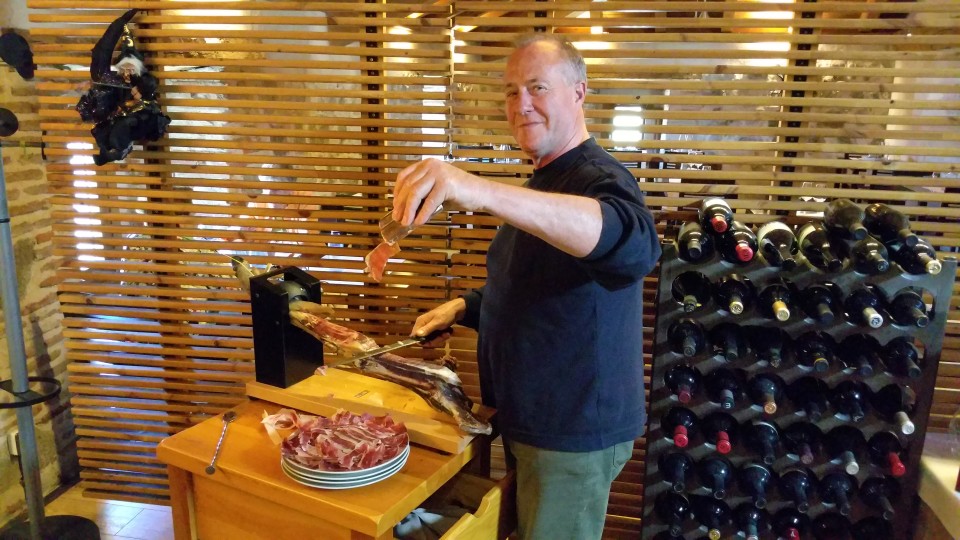 There are many little narrow streets for you to explore in the city. Be sure and wander down a few of them and marvel at your discoveries. Inside the walls, we had dinner at a Parador. These are all over the country and are state-sanctioned. The Parador dates back to the 16th Century and is actually within the Piedras Albas Palace. The Parador is also a hotel which has a beautiful garden from which you can watch the sunset. It is very therapeutic to watch the sunshine through the entrance of the walled city on the cobbled street below. 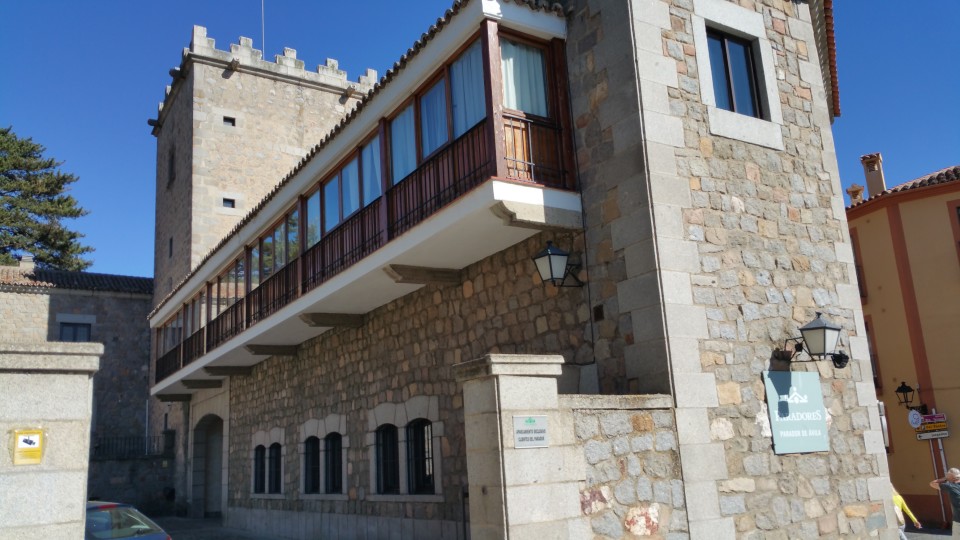 All in all, Avila has a lot to offer, especially this year as the life and death of Santa Teresa is being celebrated.

Have you been to this region?

What are your thoughts?

Disclosure:  Our writer, Kerwin McKenzie went to Avila on behalf of PointsandTravel as the guest of the Tourist Office of Spain Los Angeles.  However, the thoughts and expressions expressed here are all his own. For another article written by Mr. Kerwin McKenzie on this Spain trip, see:

I've had the pleasure of exploring walled cities in Portugal, but not yet Spain. Avila looks like the perfect place to start!

I totally agree Heather. You will not be disappointed at all.

Which was your favorite in Portugal?

You should be ready to go!

Great photos and great info - thanks Kerwin - you make me feel as if I were there with you.

Thank you Richard. Watching my every step you were :-).

I just stumbled on your blog and was so surprised to find this post about Avila, Spain. I have been researching my Spanish roots and found that it traced back to Castile and León. I am planning a trip to Dublin, London next year and will definitely include a side-trip for a few days in Spain. Thank you for this post and will now be following your awesome blog!

Good deal RO. Glad the article was able to help. I too am chasing my ancestry so I know how it feels to connect.

You should definitely head over to the region. I'm sure that after your side trip you will return for a full fledged trip :-).

PS: Its a pretty big one, but so beautiful. If we can help any further, let us know.

That is so cool! Good luck, I love it when families do research about their roots and then go to try to find them! Good Luck! This article was written by my staff writer Kerwin McKenzie, a world traveler in his own right. You can find him here: https://www.cruisinaltitude.com/