Home » Destinations » A Love Letter to Strasbourg, France for Christmas 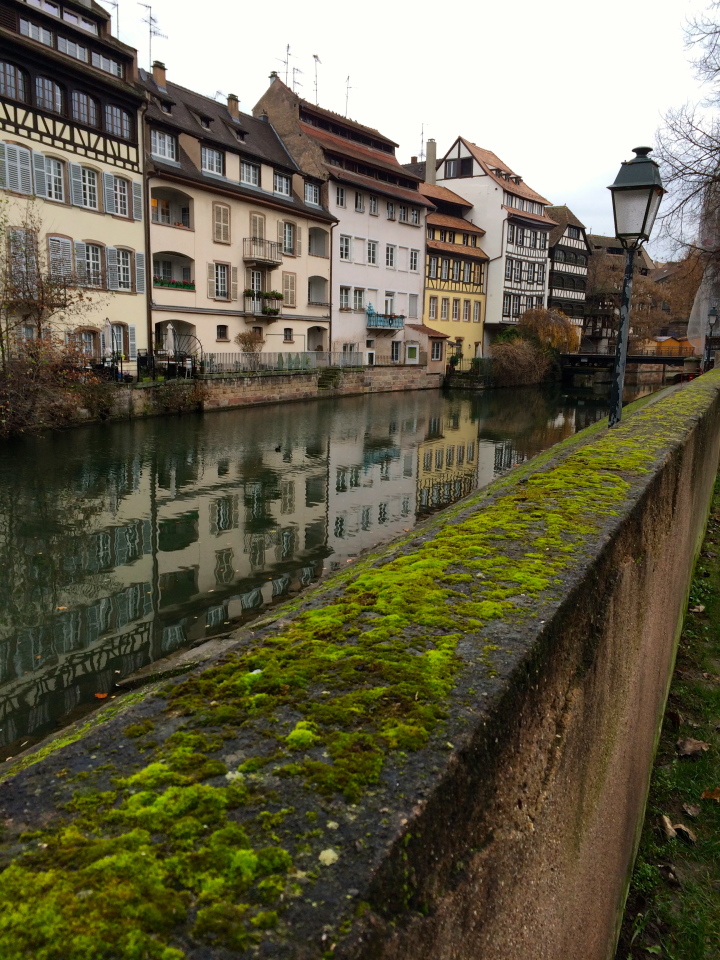 The wind was whirling around as I stepped off the bus, cold air striking my cheeks causing me to take a deep breath. I buttoned up my jacket around my neck and tucked in my scarf. Even though it was freezing cold, it was a day I had looked forward to my whole adult life, as I had always dreamed of the traditional European Christmas markets. Being an American, I had heard rumors of such fascination that I jumped at the chance to visit a few of them while in France this Christmas season on the Viking River Cruise down the Rhine River. The anticipation of this moment had been built up so much in my mind, that suddenly it was playing tricks on me and I could hear the reading of my favorite Christmas poem: 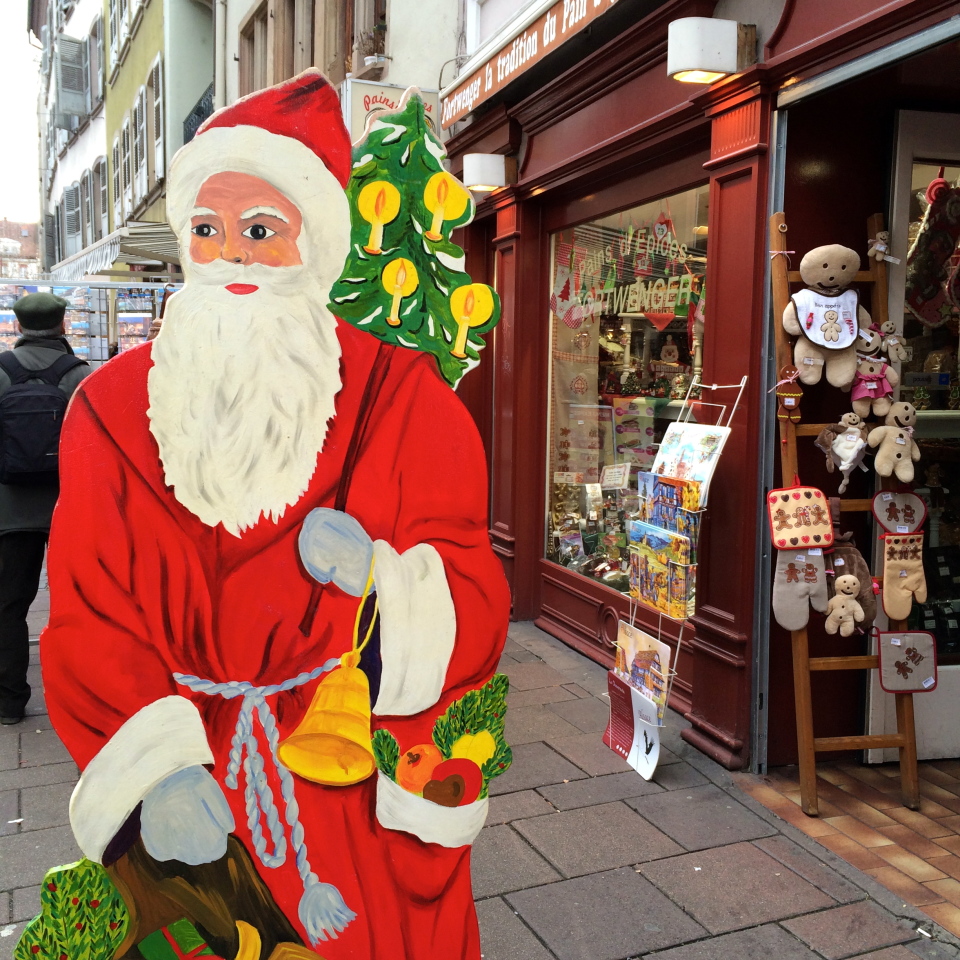 Twas the night before Christmas, when all through the house
Not a creature was stirring, not even a mouse.
The stockings were hung by the chimney with care,
In hopes that St Nicholas soon would be there.

The children were nestled all snug in their beds,
While visions of sugar-plums danced in their heads.
And mamma in her ‘kerchief, and I in my cap,
I had just settled down for a long winter’s nap. 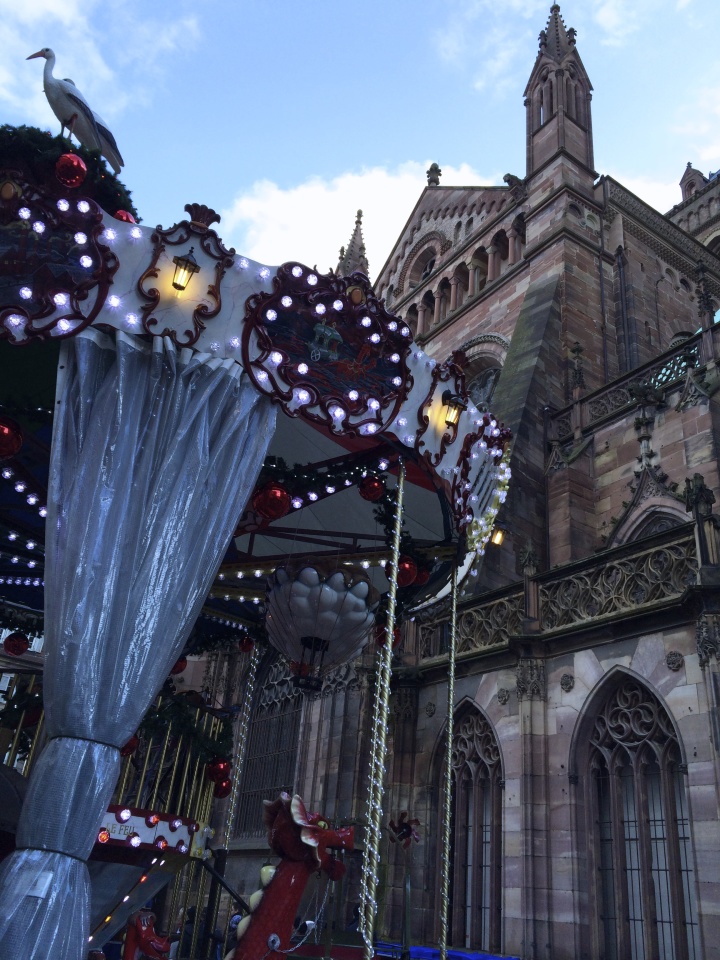 That magic that jumps from the pages when The Night Before Christmas is read out loud, THAT was the feeling I had and the words to this famous poem were all I could think of as I spied the canal and the reflections of the old German houses in the water. Somehow I could even picture that very poem being written by Clement Clark Moore in 1778 taking place right here in Strasbourg as if I could feel in anticipation the enchantment that was about to unfold around the Christmas season. That anticipation that had been built up in my mind and yet somehow, it now was so hard to grasp, as if it was like déjà vu. 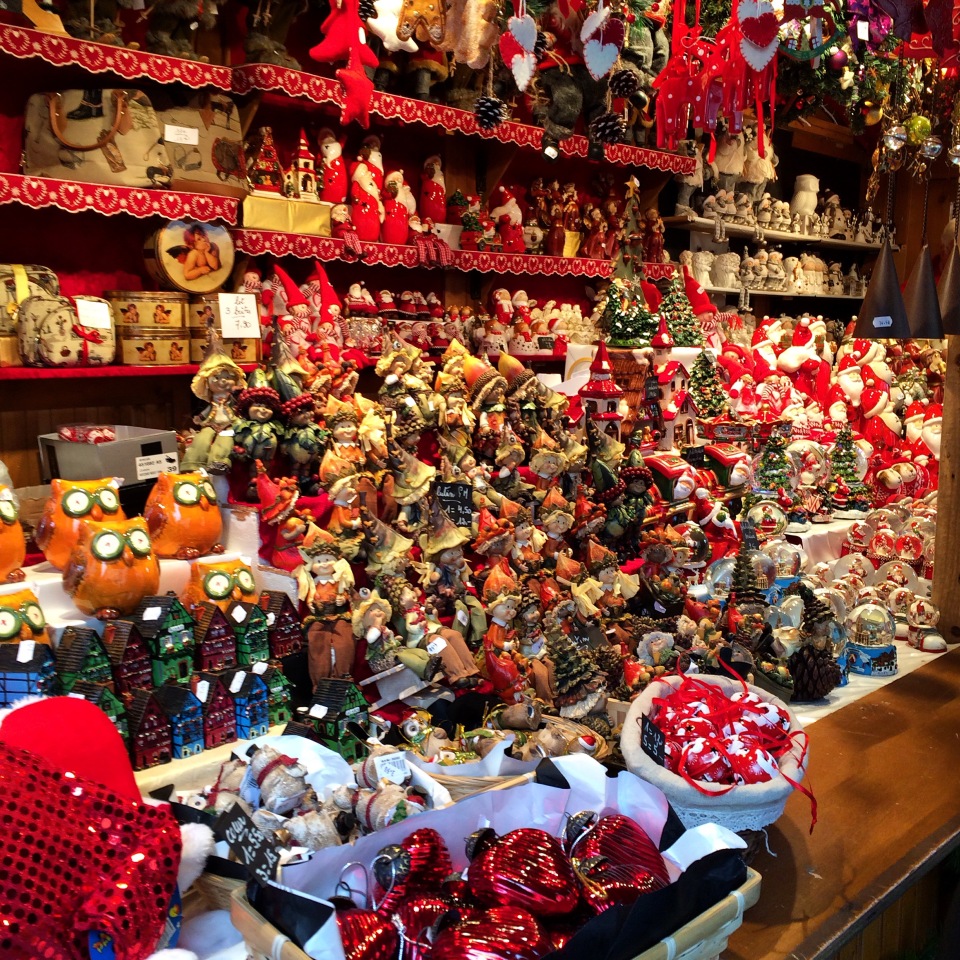 “For poems are like rainbows; they escape you quickly.”
—Langston Hughes, The Big Sea 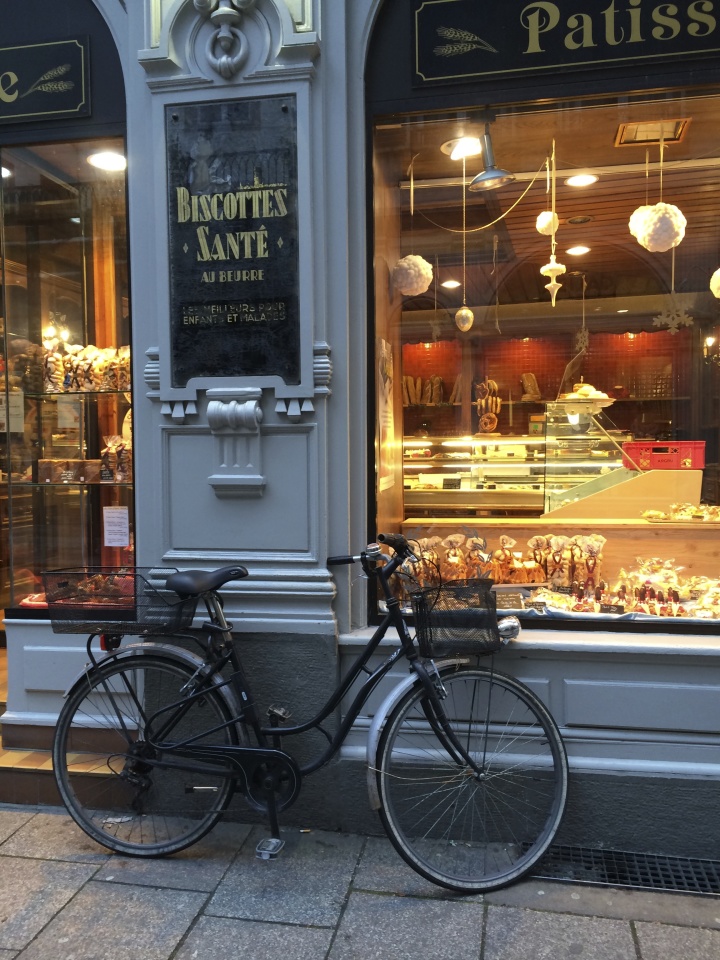 I was on a group tour of the city and I followed along with the tour guide, which for me is quite an accomplishment, teetering way ahead of the group or way behind so that I could get great photographs, yet I could hear her voice in my earpiece about the history of Strasbourg, 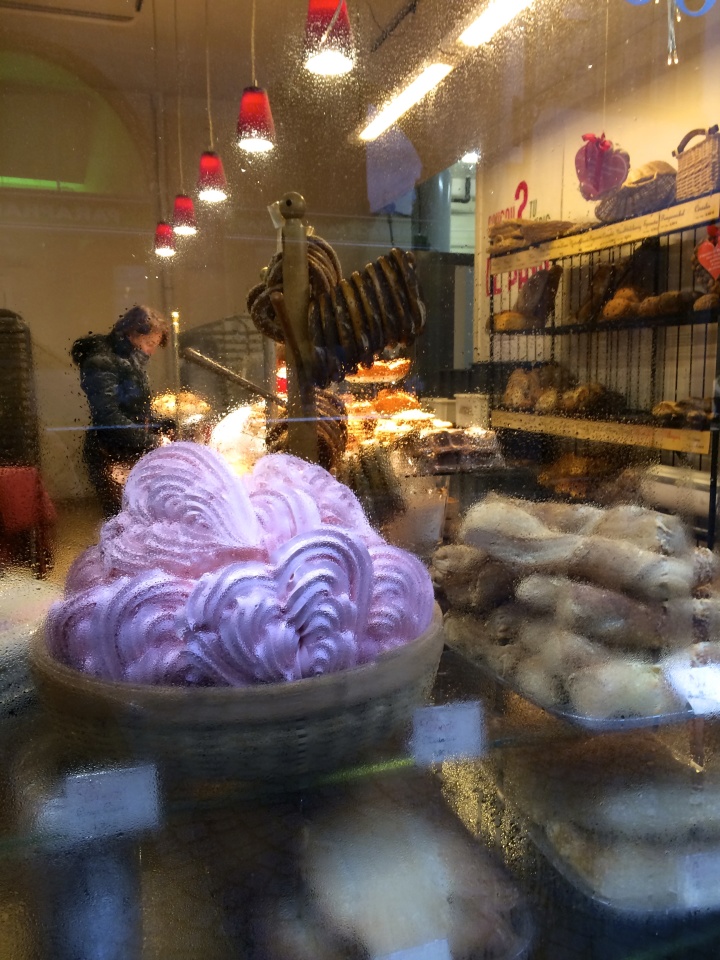 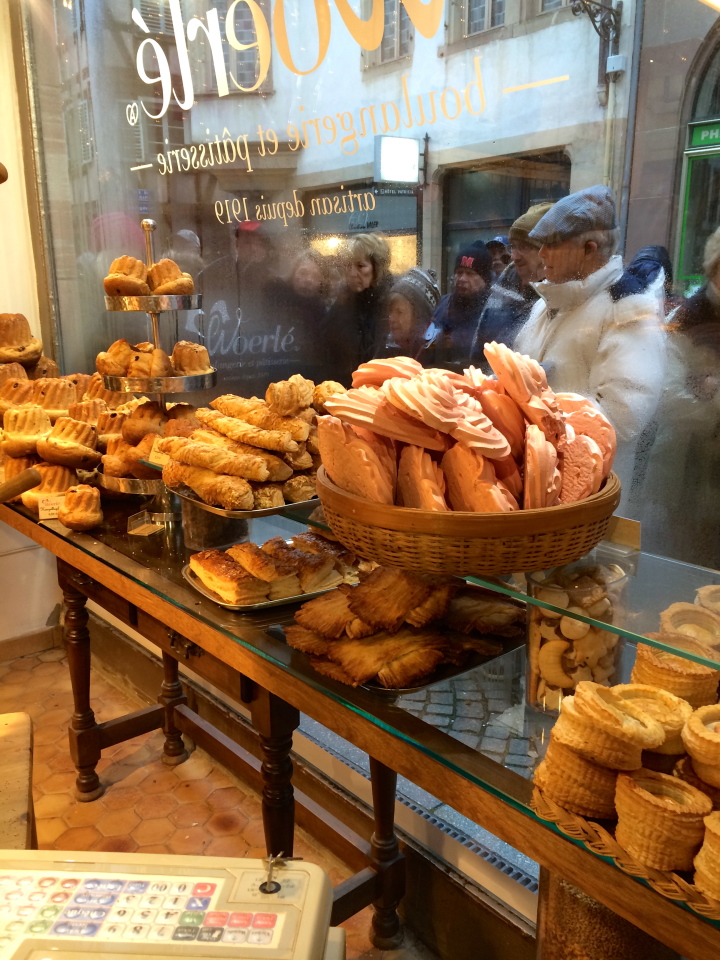 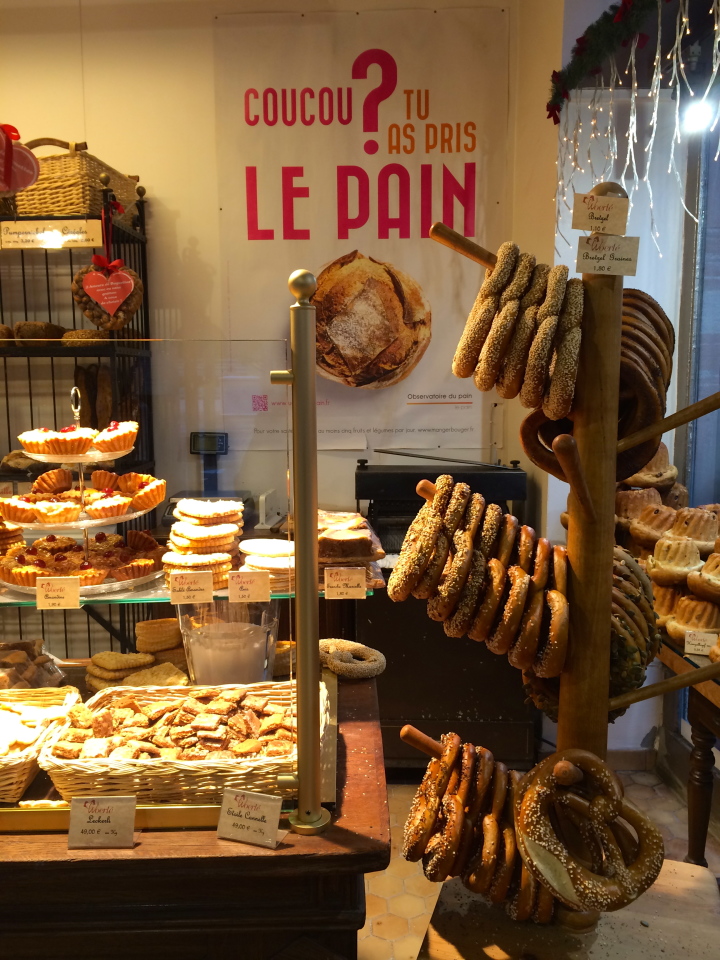 I kept thinking. “But what about the Christmas markets? 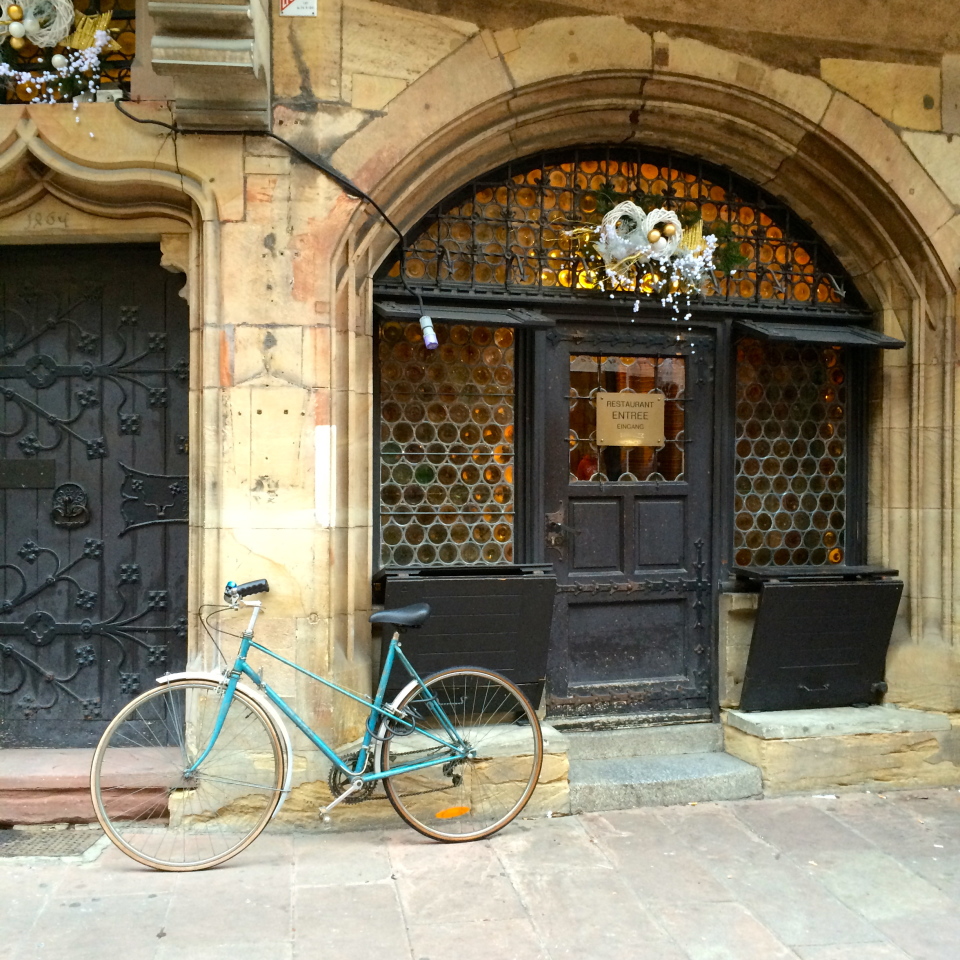 She continued and went through the brutal history of Strasbourg, which made me pause for a moment to think about how the beauty of Christmas has made such a presence here, with every house and restaurant and building not just decorated for Christmas, but literally covered in oversized Christmas memorabilia. As if this town really needed Christmas to lift its spirits, to have something to believe in and that that tradition grew to this level of magic probably due to its tumultuous past. 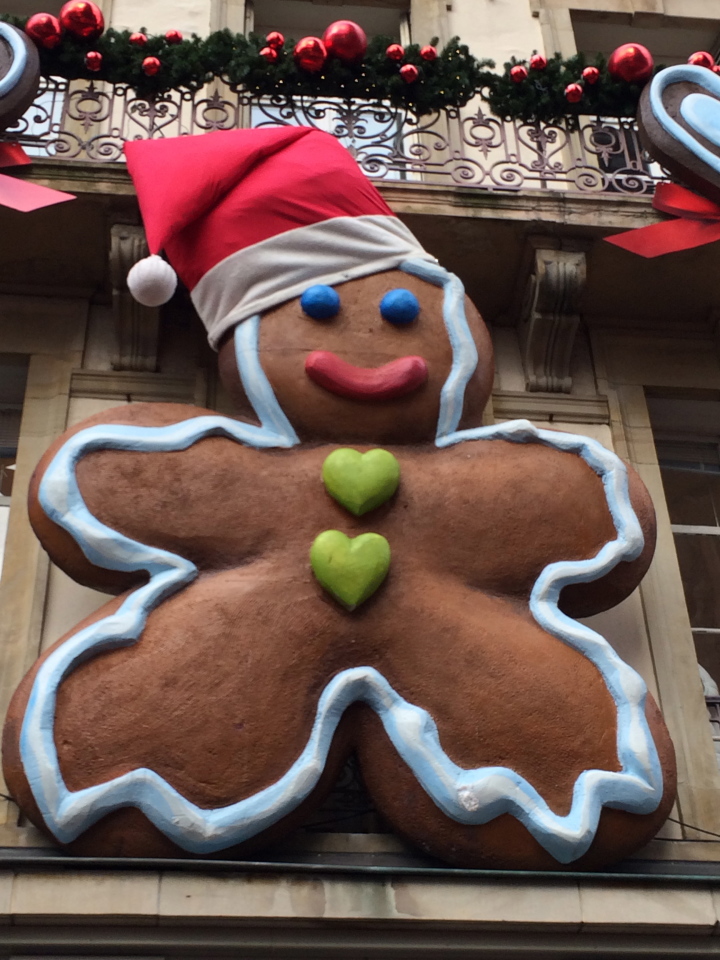 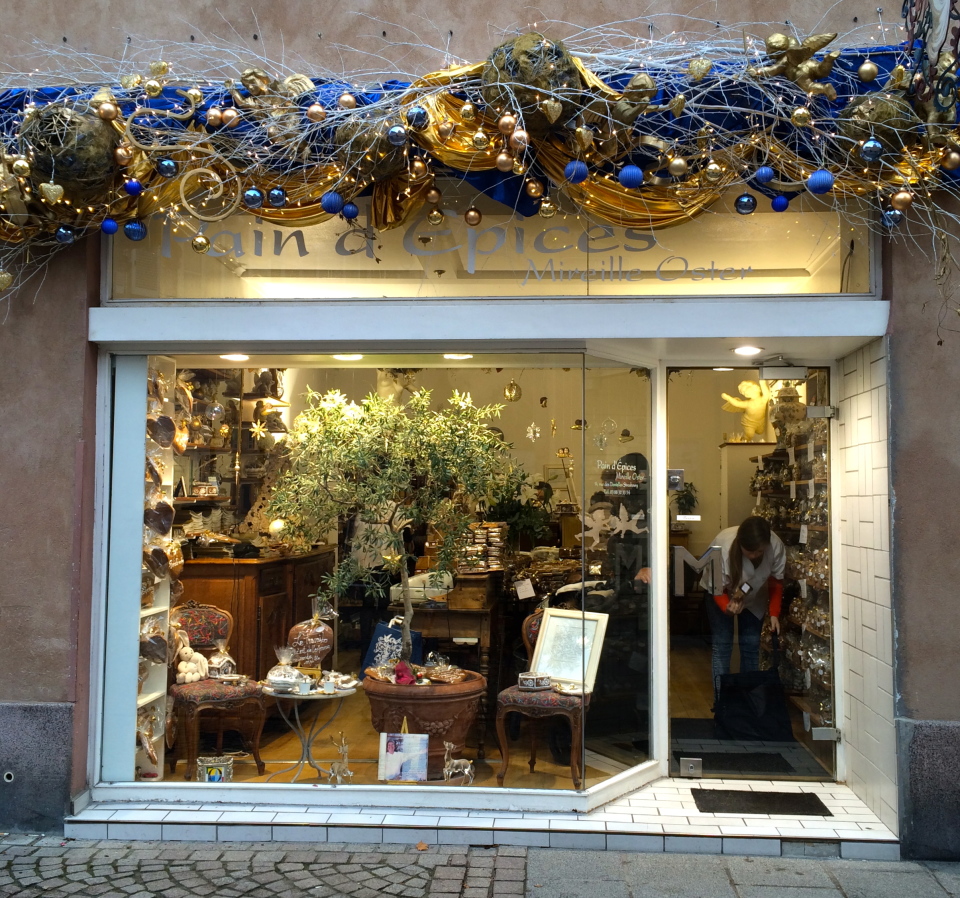 Thinking of the tragic history of this beautiful border town, I realize this is no ordinary city, nor ordinary people. They are of the resilient kind. The kind that no matter what is going on around them, they will survive; they just need the hope, faith, and grace of the Catholic Church to persevere. Perched on the border between Germany and France, at one time in its citizen’s lives, they were French, then German, and then French once again. Many people had to fight against their own brother during World War II. Unfortunately, due to its location on the border, the city was right dab in the middle of some horrible bombing during this time.

To sum it all up in one sentence, “darinnen liegt begrahben so maniger Soldat” from an old folk song of Strasbourg, which means, “many a soldier lies buried here.” To think of the war and how many times this city has been under siege makes for a stark contrast to what I was seeing before me: a quaint decorated city of canals with a mesmerizing cathedral. It is a miracle that it even exists today. Yet I know it is because of its people and their faith in God, as he has made them strong and resilient.

Today, while strolling the city for the Christmas Markets that dot the town, I see the magic that is Christmas in the streets with its enchanting carousel, glühwein, hot orange chaud, hot chocolate with cream and snowball treats. It was in Strasbourg in 1570 that the very first and oldest Christmas market in Europe took place, called the “Christkindelsmärik” (market of the Infant Jesus). 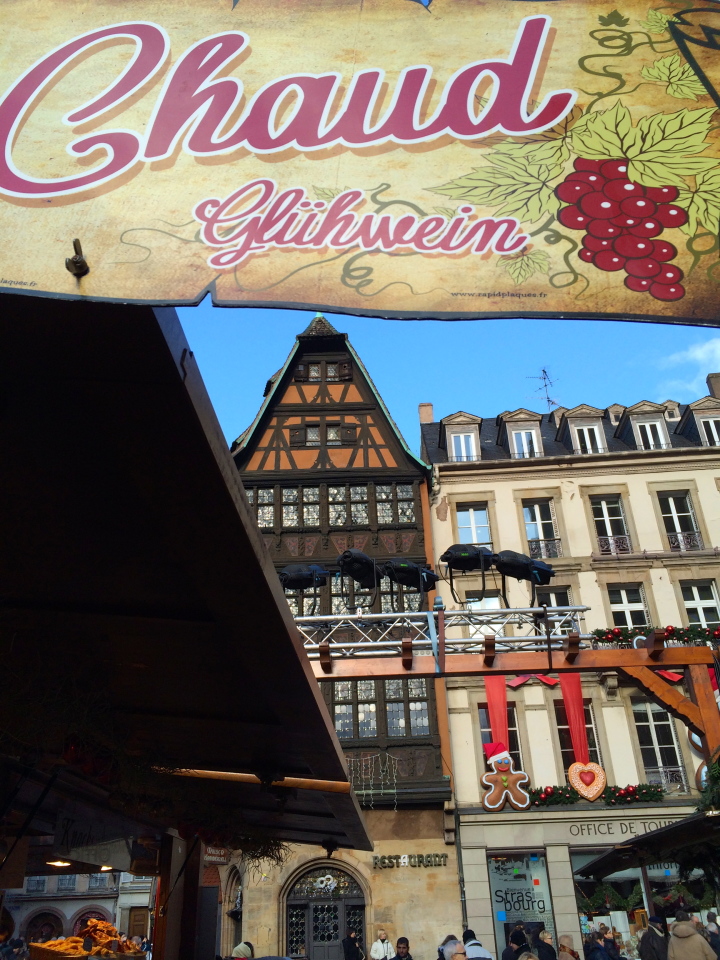 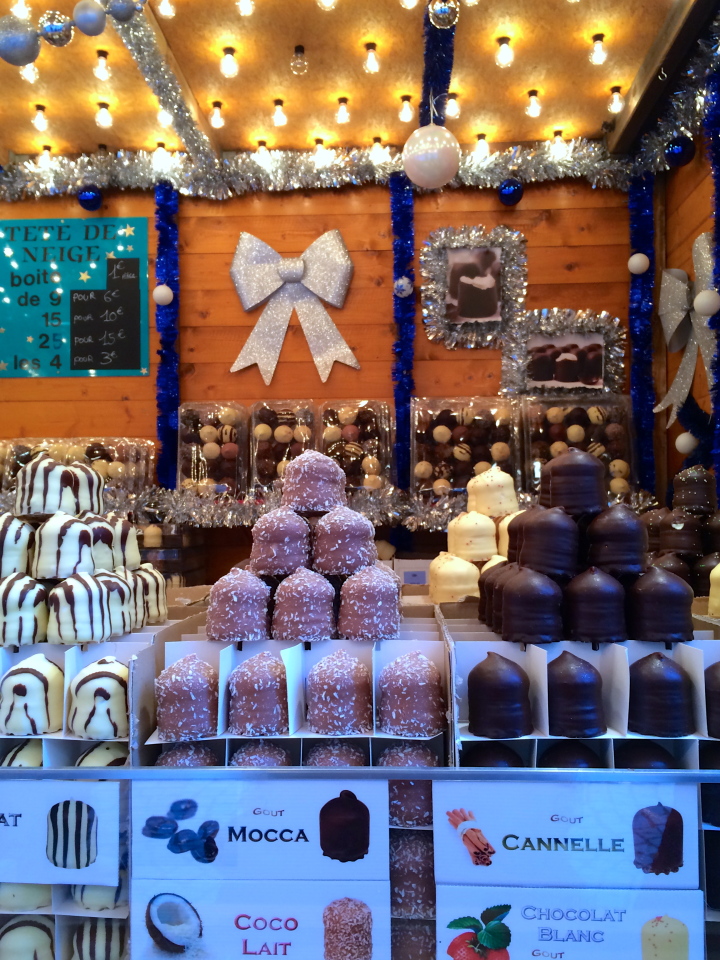 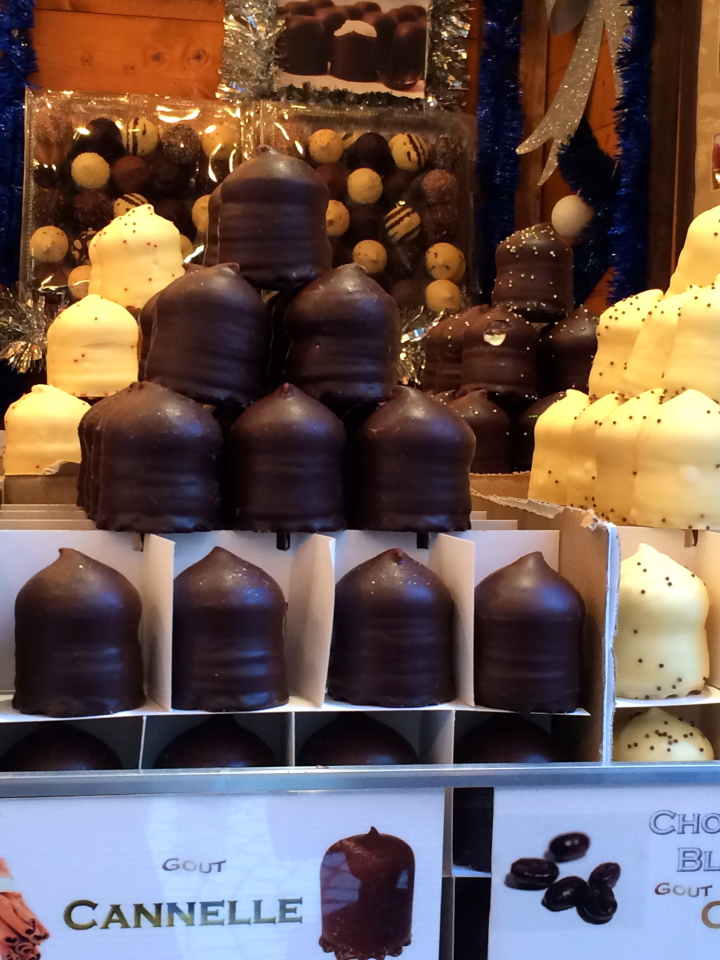 As I look around, it appears as if the city has been reborn again (like Christ), but with magic this time. Even the name Strasbourg is key to remembering the instability of its tumultuous past:

Strasbourg today may have a glorious past, yet the promise of a bright future exists and it does a fine job in representing the dualism of the French and the Germans influences it has undergone. 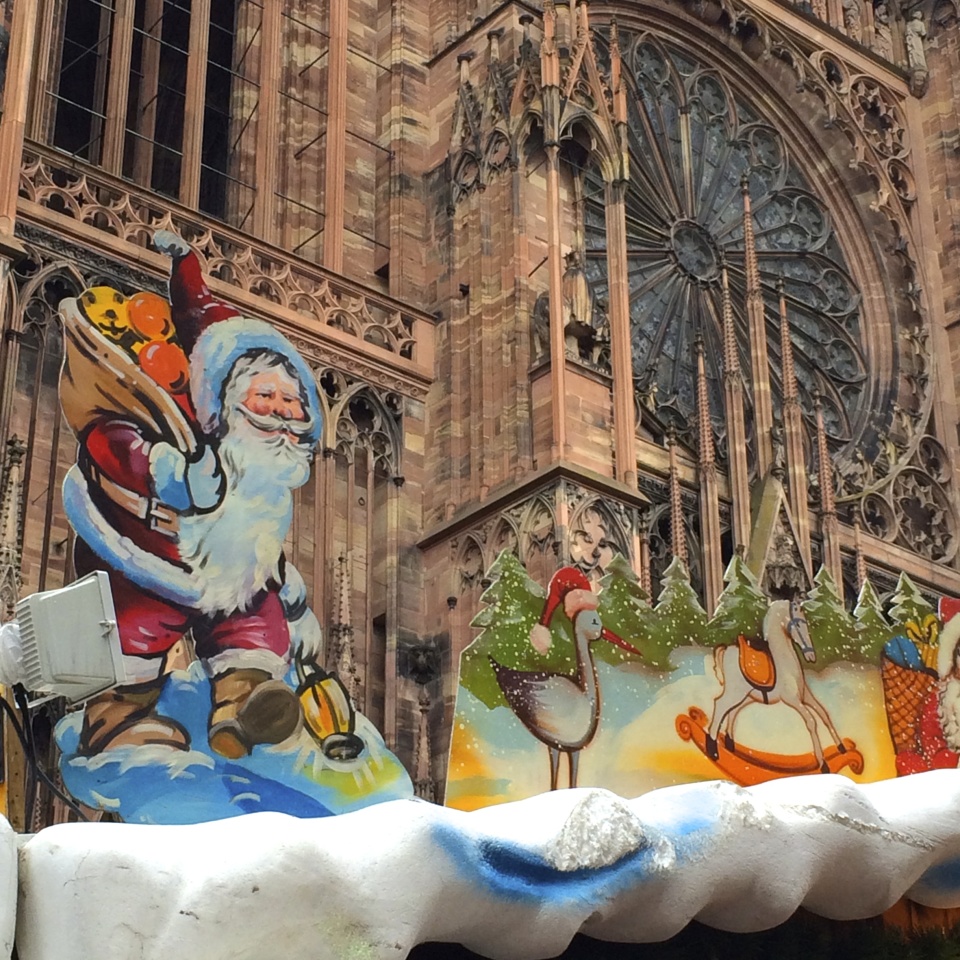 The one thing you will not miss while strolling the streets of Strasbourg will be its stunning gothic cathedral. It is a jaw-dropping piece of architecture. The immense beauty of the Strasbourg Cathedral is a mix of filigree stonework, lacy spires, and leering gargoyles. And during the winter season, you will find at the foot of its towering presence the cutest little Christmas market, which you do not want to miss. Strasbourg is the perfect city for a combination of strolling, snacking, shopping and then admiration of its gorgeous cathedral. 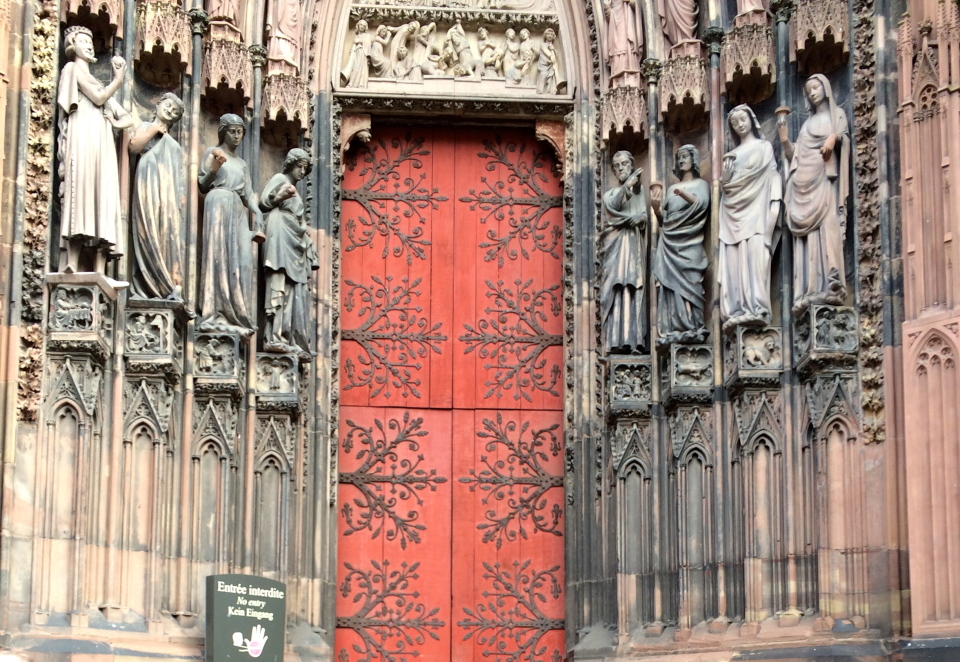 Disclosure: I was a guest of Viking River Cruises and my stop in Strasbourg was one of the stops on the Rhine Getaway Package.

Not yet visited this the city, but plan to visit a friend who lives there in 2015 hopefully. Thanks for the photos, it's whetted my appetite even more.

I know, right? Crazy oversized Christmas everything is in Strasbourg. But somehow, it seems just perfect!

I have been following along with your adventures. I lived in Karlsruhe Germany for many years so I spent a lot of time in this beautiful city of Strasbourg. I'm glad you got to visit it at this magical time of year and share your experience with us. Thanks!

Oh, I loved it so much! I can't wait to go back just regular season as well!

I would love to visit the Christmas markets. The pastries look so French but the architecture looks so German!

They are so amazing! I hope you get a chance to do it next year, put it on your bucket list!