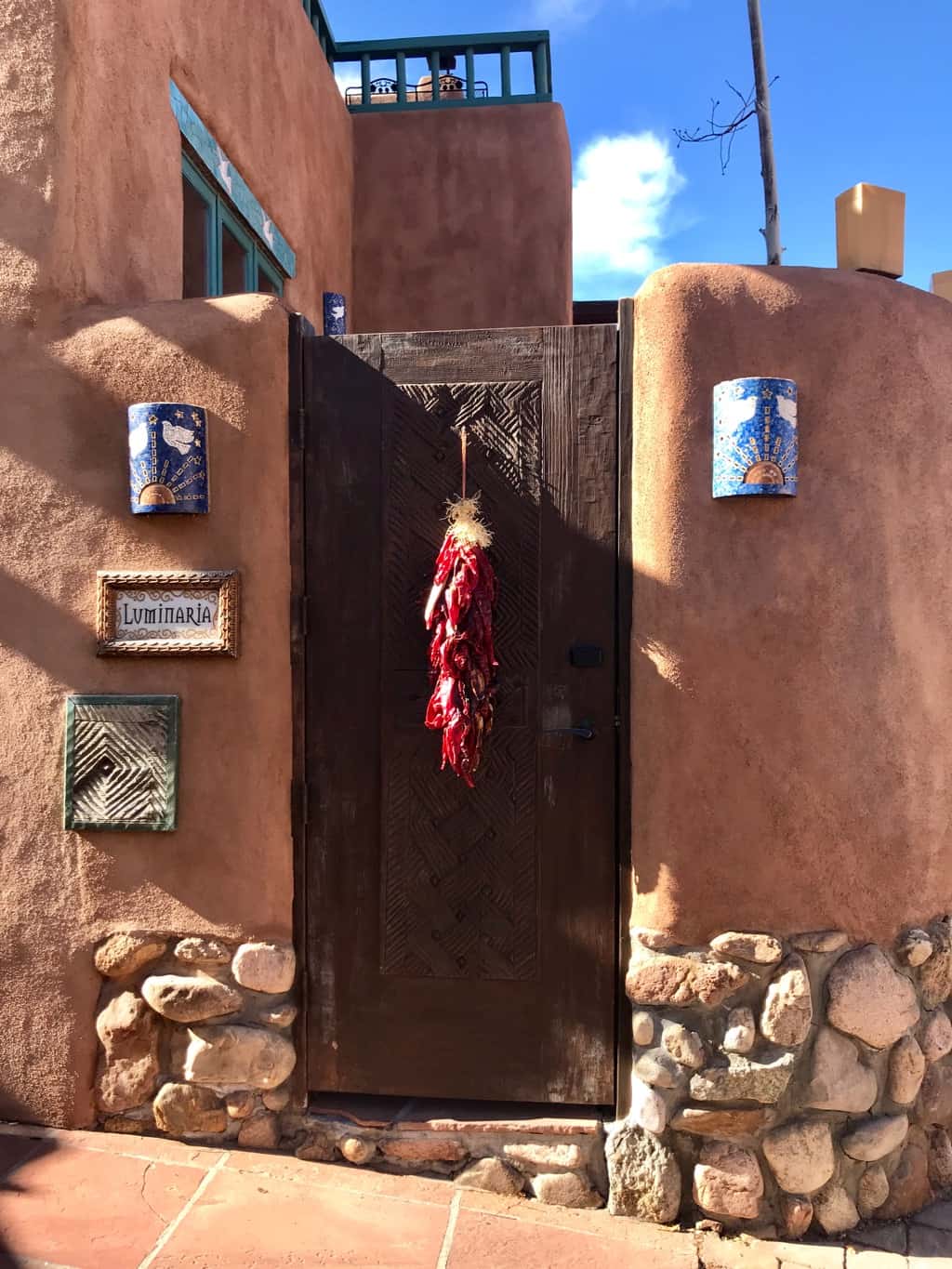 Nestled away at the tail end of the Rockies known as the Sangre de Cristo Mountains, Santa Fe is a high elevation capital like its Colorado cousin. However, with an elevation of 7,199 feet, Santa Fe is officially the highest city in the United States. Thanks to this, you can expect fair weather year-round and over 300 days of sunshine, making this high desert gem a must-see destination for your next vacation. Known as the “town of holy faith”, you will find the USA’s oldest church right here dating back as far as 1610! 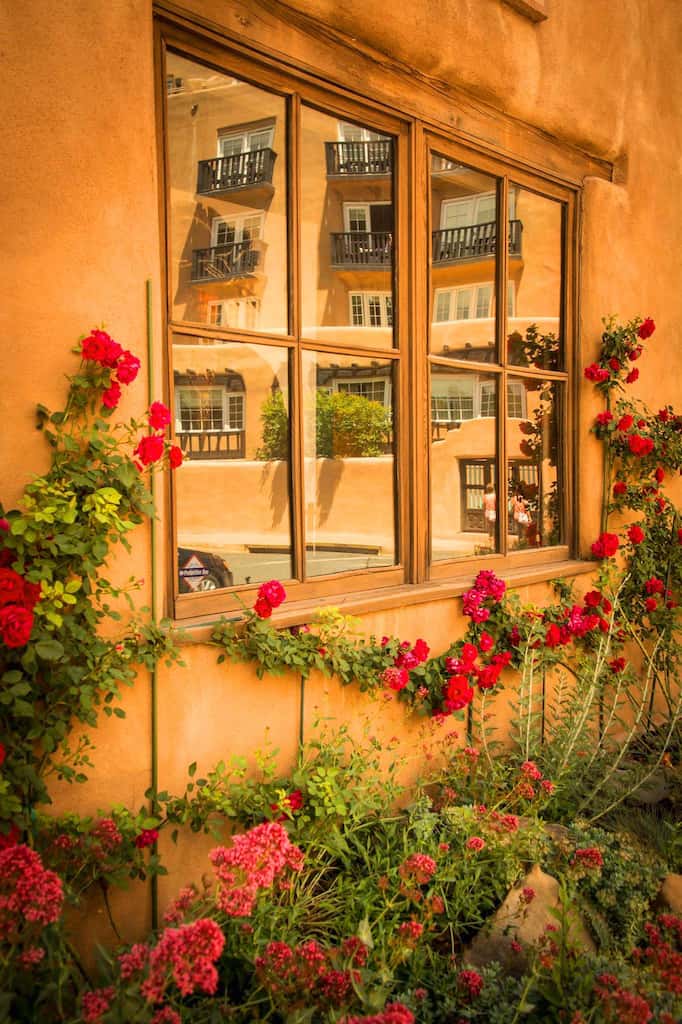 But what is there to do in Santa Fe? A lot surprisingly, and several of the greatest bucket list items are totally free! With a mix of cultural influences from native tribes like the Navajo and the Tlaxcaltecan Indians to the Spanish conquistadors and colonizers to the American and Mexican settlers, Santa Fe has a rich history that is as interesting as it is unique. 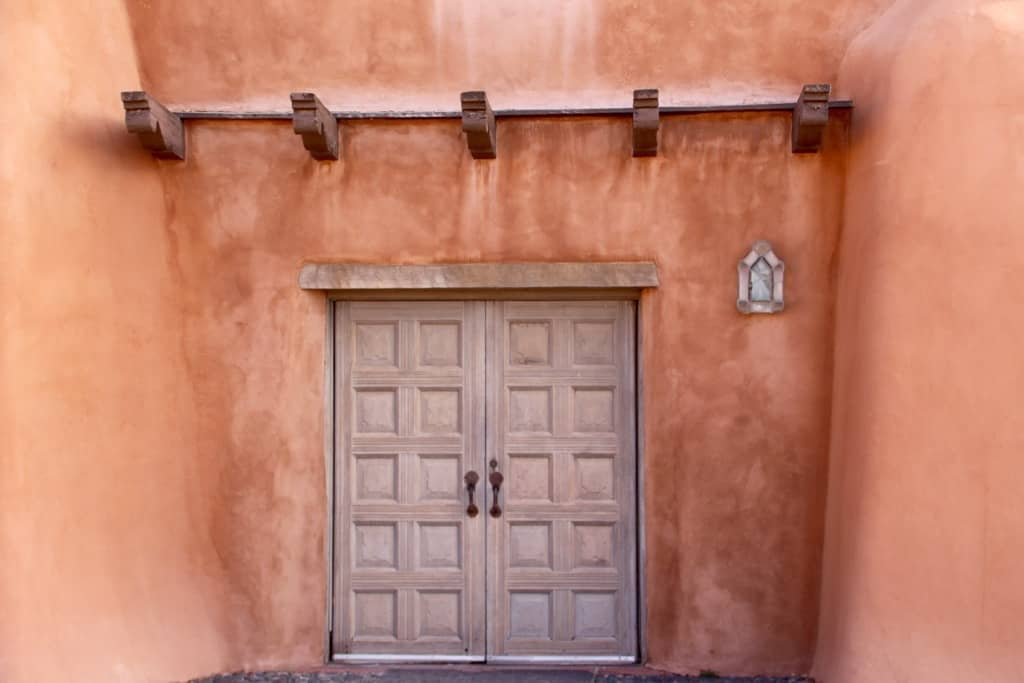 What's in this post: hide
1 7 free things to do in Santa Fe:
1.1 Walk around the historic Santa Fe Plaza
1.2 Stroll through Santa Fe Railyard
1.3 Visit Santa Fe’s Esteemed Churches
1.4 Peer Back in Time at La Cieneguilla Petroglyphs
1.5 Relax at the Randall Davey Audubon Center and Sanctuary
1.6 Get Educated at One of Santa Fe’s Many Museums
1.7 Find Free WiFi in Santa Fe
1.8 Here is Something Super Fun to do:
1.9 Go for the Experience Of Meow Wolfe

7 free things to do in Santa Fe: 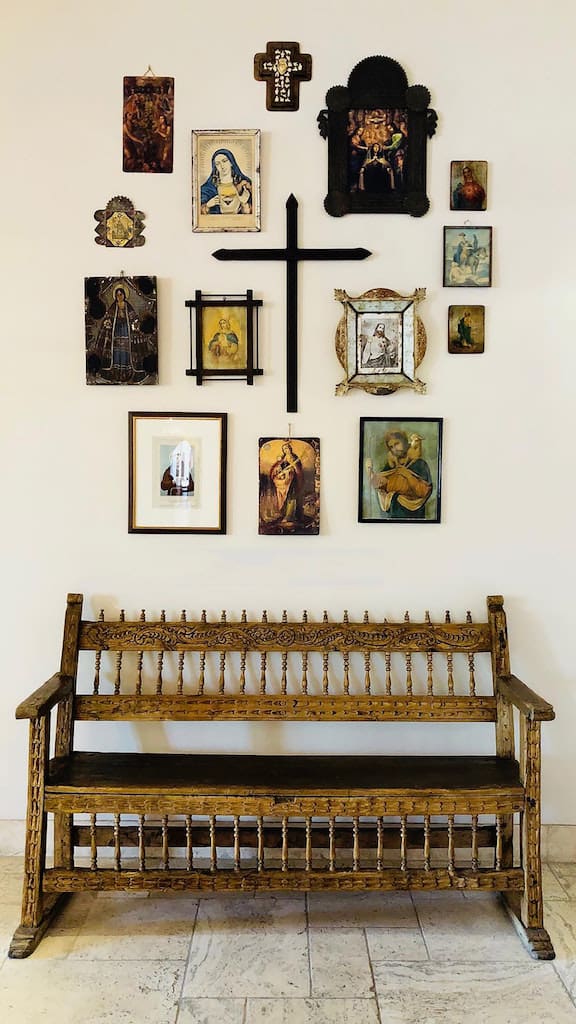 The heart of the city is the historic Santa Fe Plaza, which is a National Historic Landmark. Having been here since 1610 it used to be a fort and the end of the Santa Fe Trail trade route. This plaza has plenty of open areas, a gazebo with benches in the center square, and plenty of shopping.  They even have food cart vendors along the sidewalks. Maybe start with breakfast at Café Pasqual’s first, then walk around the plaza. The trees during the spring are gorgeous and during Christmas time, they are all lit up! Also, there are many shops and restaurants surrounding the plaza. 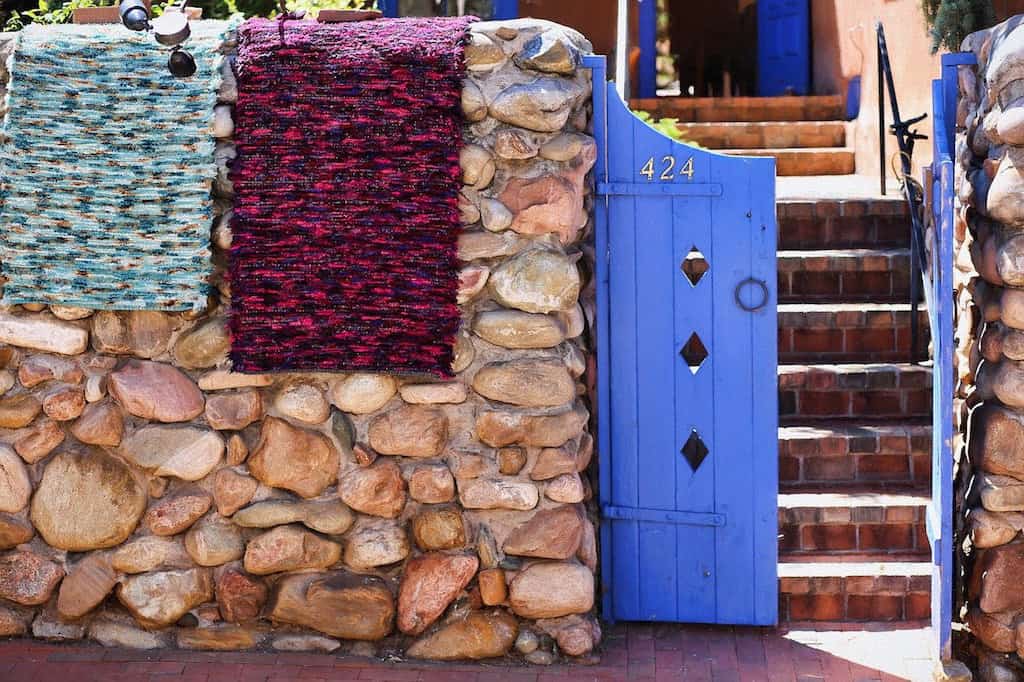 One of Santa Fe Plaza’s main buildings is here called the Palace of the Governors. Since it is one of the oldest public buildings it is made out of fortified adobe, where it has been turned into a history museum. You will find many tribal Americans selling their wares along the covered sidewalk outside of this museum. I found some great deals here. 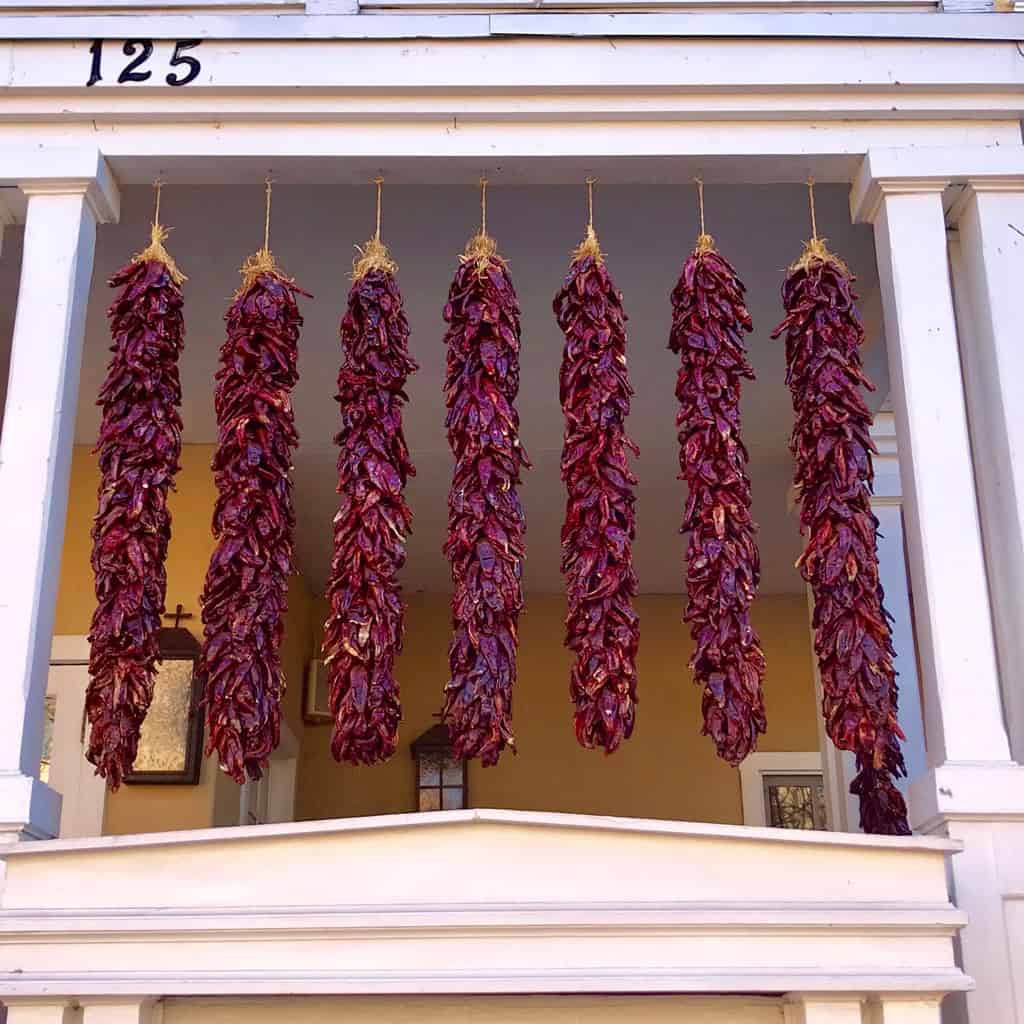 There is also a cool area where there is a great photo opportunity right where Cathedral Place dead ends into Palace Avenue. There are some cute boutique shops, including the colorful Todos Santos Chocolate shop. You can check out Doodlets for Milagros, hearts, handmade folk art, candy and so much more. It is filled with whimsy, sprinkled with a dash of irreverence, and been here since 1955!

If by now you are ready for happy hour: Secreto’s Lounge Scotch on the Rocks is the perfect thing to quench your thirst and located right across the street from Doodlets inside Hotel St. Francis. You could also stop by Susan’s Christmas Shop for holiday décor or to just look around and plan for your next Christmas holiday! There is also a candy store hear by Senor Murphy Candymaker. You must try the Chile creams!

Located near the heart of the city, The Railyard is Santa Fe’s creative district that is popular with both tourists and locals alike. It has been a hub of activity for years since it first brought visitors by train here in the 1880s. The area has since been revitalized by the city. Here you can also find El Museo Cultural de Santa Fe which protects and promotes Hispanic Cultures of New Mexico and of course Railyard Park where all who visit can cherish the natural beauty while basking in the warm sun. Also, you can visit SITE Santa Fe, the district’s art gallery and performance hub; Or Evoke Contemporary and LewAllen Galleries. 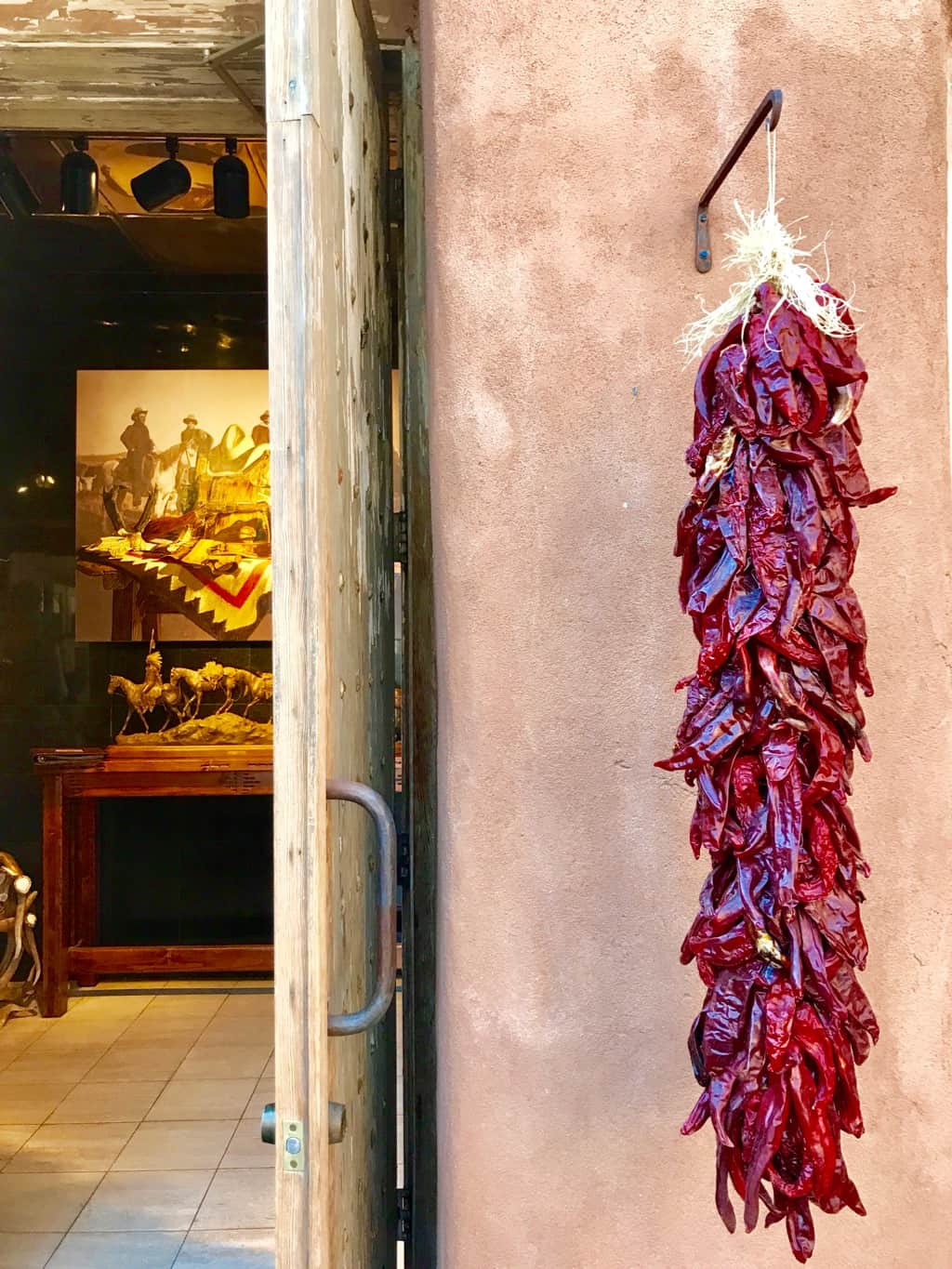 For something off-the-beaten-path, you can drive to DeVargas Center Shopping Mall to the Harrel House Bug Museum! And if you still need a few more souvenirs, you can stop by Pandora’s who carry textiles from strange lands interwoven with the native traditions of Indian, Hispanic, and Anglo New Mexico or stop by Bodhi Bazaar.

This area of town contributes significantly to its art and food scene and is absolutely worth a visit while in town. In this locale, you can also find the Santa Fe Farmers’ Market. It is held every Saturday year-round, on Wednesdays between July and September and on Tuesdays from May to November. 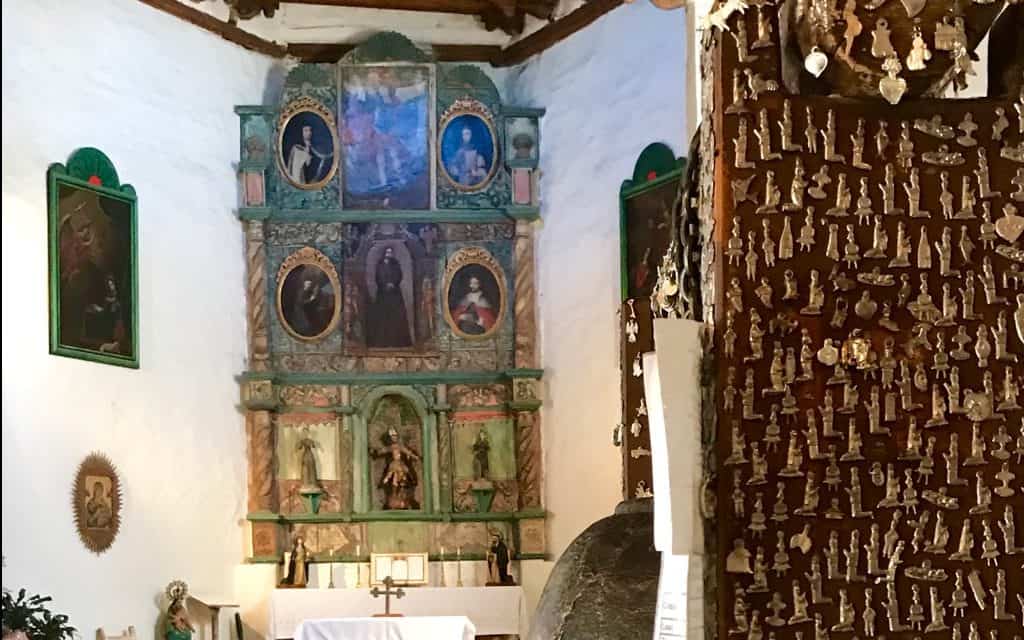 Santa Fe is one of the United States’ oldest communities having been founded in 1610. That same year, Pedro de Peralta begin construction of the San Miguel Mission for the resident soldiers and native peoples when Santa Fe was still a part of the Spanish Empire. This absolutely incredible statistic makes San Miguel Mission the oldest church in all fifty states. This historic landmark is a classic example of New Mexican architecture with its pueblo exterior that has been adopted in a modern sense around buildings all over Santa Fe. 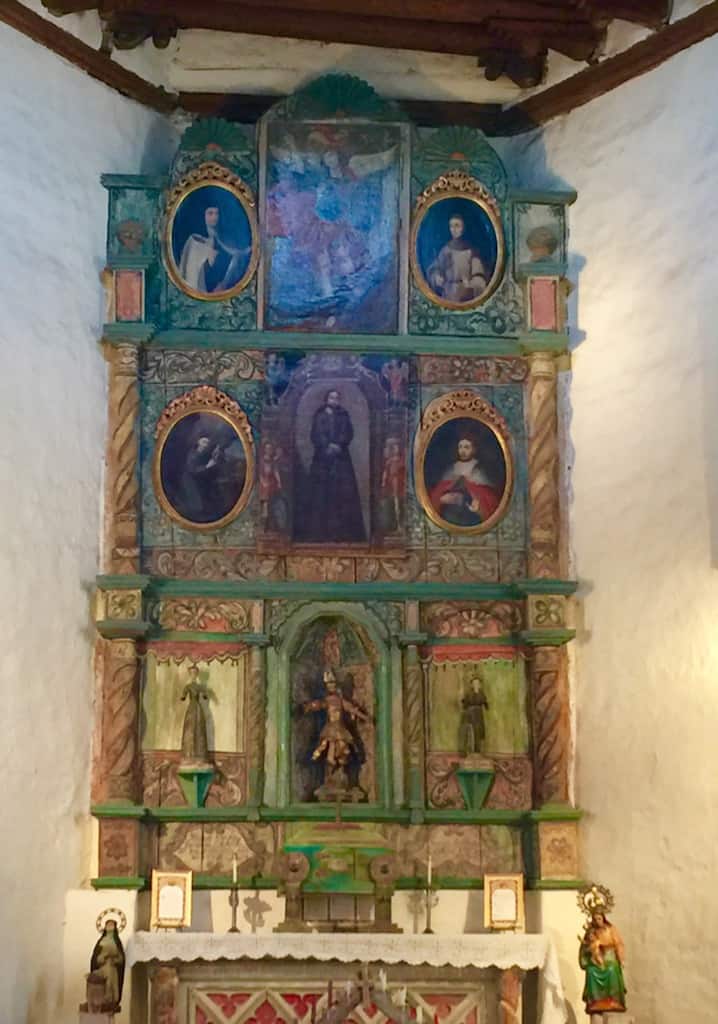 Another fine example of architecture within city limits is Cathedral Basilica of St. Francis of Assisi. Built back in the late 1800s, this Roman Catholic cathedral is the namesake of the man that inspired the New Mexican capital upon its founding. After entering through its immense bronze doors, one can gaze upon the granite slabs that make up the building’s interior. Both of these incredible feats in architectural work are free of charge and offer mass services regularly.

Peer Back in Time at La Cieneguilla Petroglyphs

Just east of the modern marvel that is Santa Fe Airport lies an ancient wonder that is etched into the basalt stones of the Caja del Rio Plateau, the La Cieneguilla Petroglyphs. Dating between 1400 and 1900 AD, several hundreds of carvings can be found across the landscape, however, they are concentrated at La Cienguilla.

Here you can find is an abundance of hump-backed flute players as well as a variety of bird images of those that call this high desert its’ home. The engravings are mostly the work of Keres Pueblo people whose descendants still inhabit the surrounding area. The site is just 20 minutes outside of town and is a 5-10-minute walk from the nearby parking lot.

Relax at the Randall Davey Audubon Center and Sanctuary 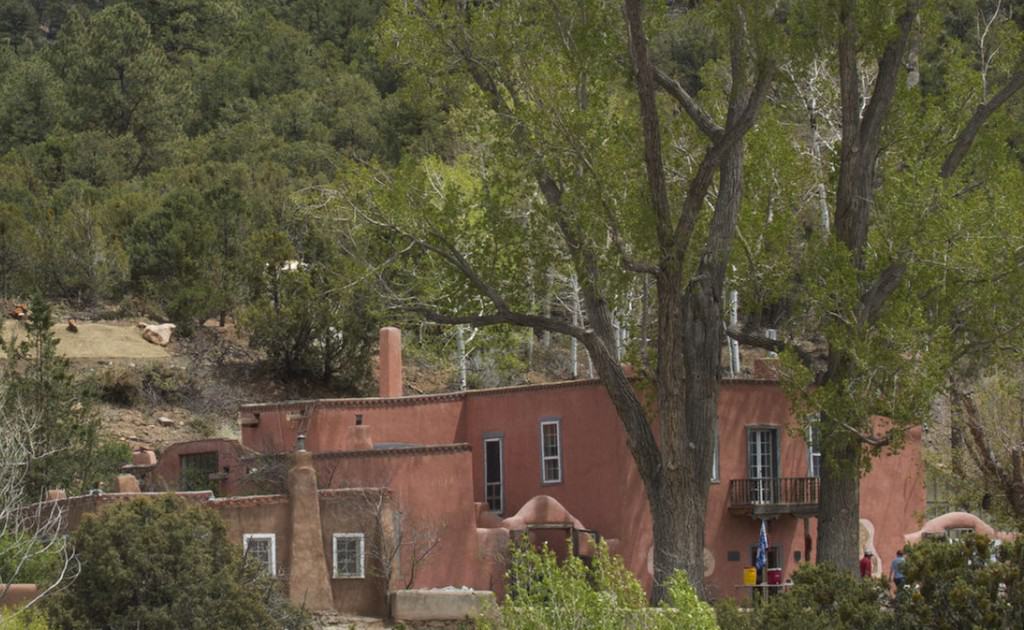 Local art legend Randall Davey called this secluded house in the hills overlooking Santa Fe his home before he passed away in 1964. Since his passing, the property has been converted into a nature facility that houses about 190 species of birds and various other forms of flora and fauna. I am, of course, talking about the Randall Davey Audubon Center and Sanctuary.

Located on the eastern side of town, this 135-acre property is Santa Fe’s only nature center and as such has been deemed worthy of preservation by the United States government. The center hosts thousands of visitors every year who stroll through the property looking to catch a glimpse of some of the near 200 bird species that call this place their home. You can hike on dozens of trails around the sanctuary or attend a bird walk led by local experts at 8:30 AM every Saturday. And best of all, it’s free!

Get Educated at One of Santa Fe’s Many Museums

You learn something new every day and that should include days spent on vacation. As knowledge is power, you will certainly want to dip into one of Santa Fe’s museums if you are looking for something free to do. If you’re a military buff, the aptly named Military Museum is equipped with a vast collection of weapons and military paraphernalia and is entirely free. 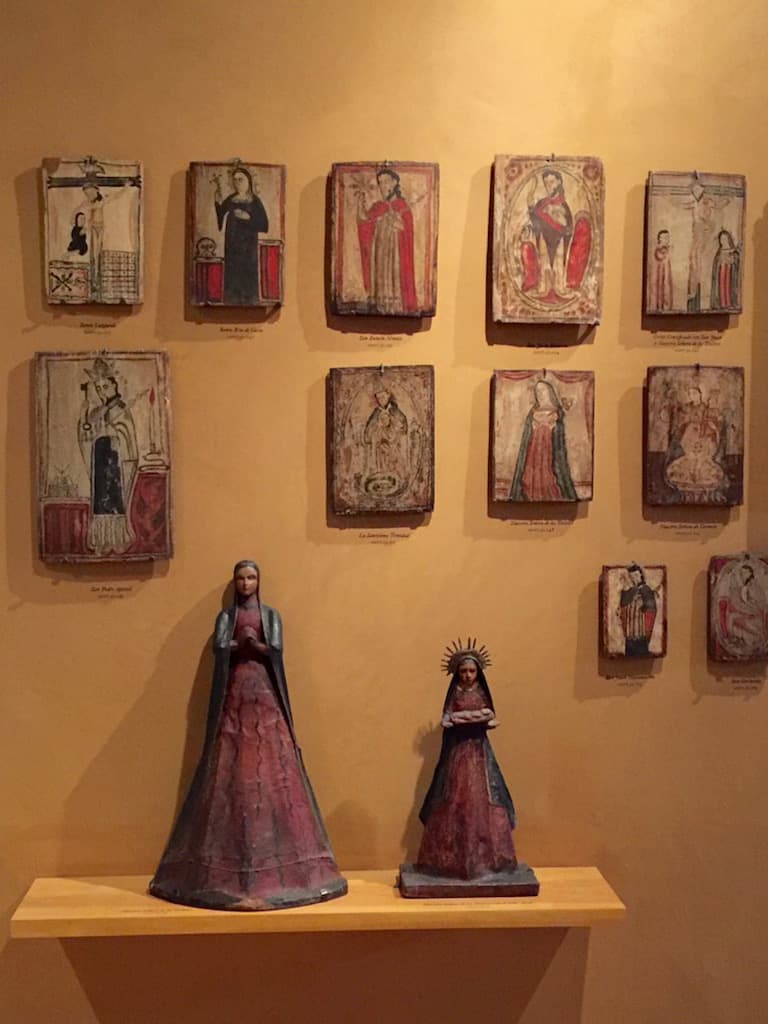 There is also the New Mexico History Museum and the adjacent New Mexico Museum of Art, both of which locals view as proud representations of their state; these two attractions offer free admission every Friday from 5-7 PM. If you are lucky enough to be in Santa Fe on Museum Hill Community Day, an additional four museums, as well as the city’s botanical gardens are free of charge. This holiday highlights New Mexican culture with several events going on throughout the day. Held near the end of September every year.

And just in case you are looking for free wifi, the Washington Avenue branch of the Santa Fe Public Library has free wifi. It happens to be about a block from the Santa Fe Plaza is a great place to connect. Also, don’t forget that many of the hotels and restaurants offer free Wi-Fi around or near the plaza. 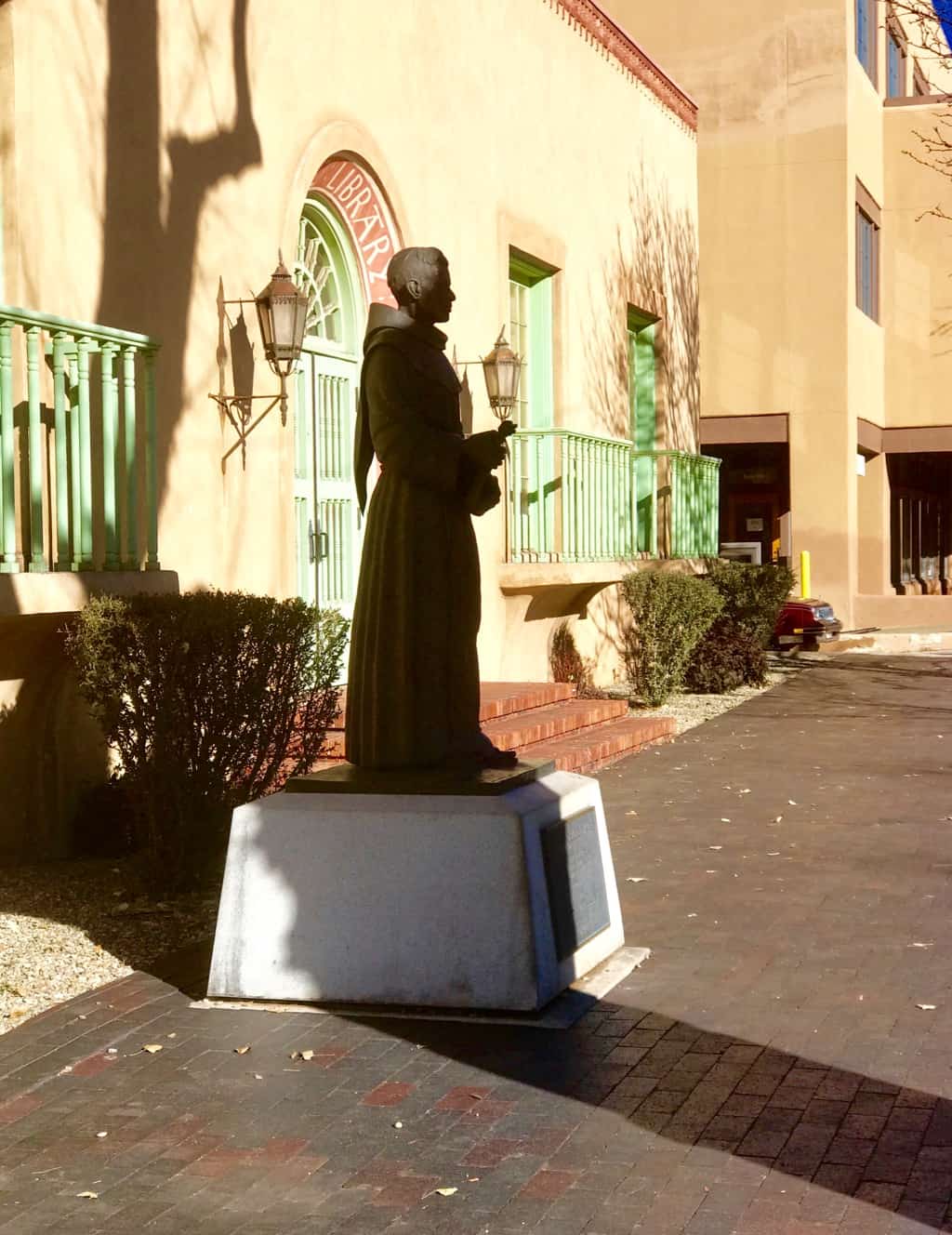 In a region with a history that extends back thousands of years, Santa Fe is uniquely suited to hosting experiences like no other city in the United States. A strong influence of Native American culture can be seen in the food, art, and architecture and highlights how, over centuries, the city has stayed true to its roots. A unique American Southwest experience awaits you as you walk among adobe giants in your never-ending hunt for the best free things do to on your next vacation. And Santa Fe is ready to deliver on your expectations.

Here is Something Super Fun to do:

Go for the Experience Of Meow Wolfe 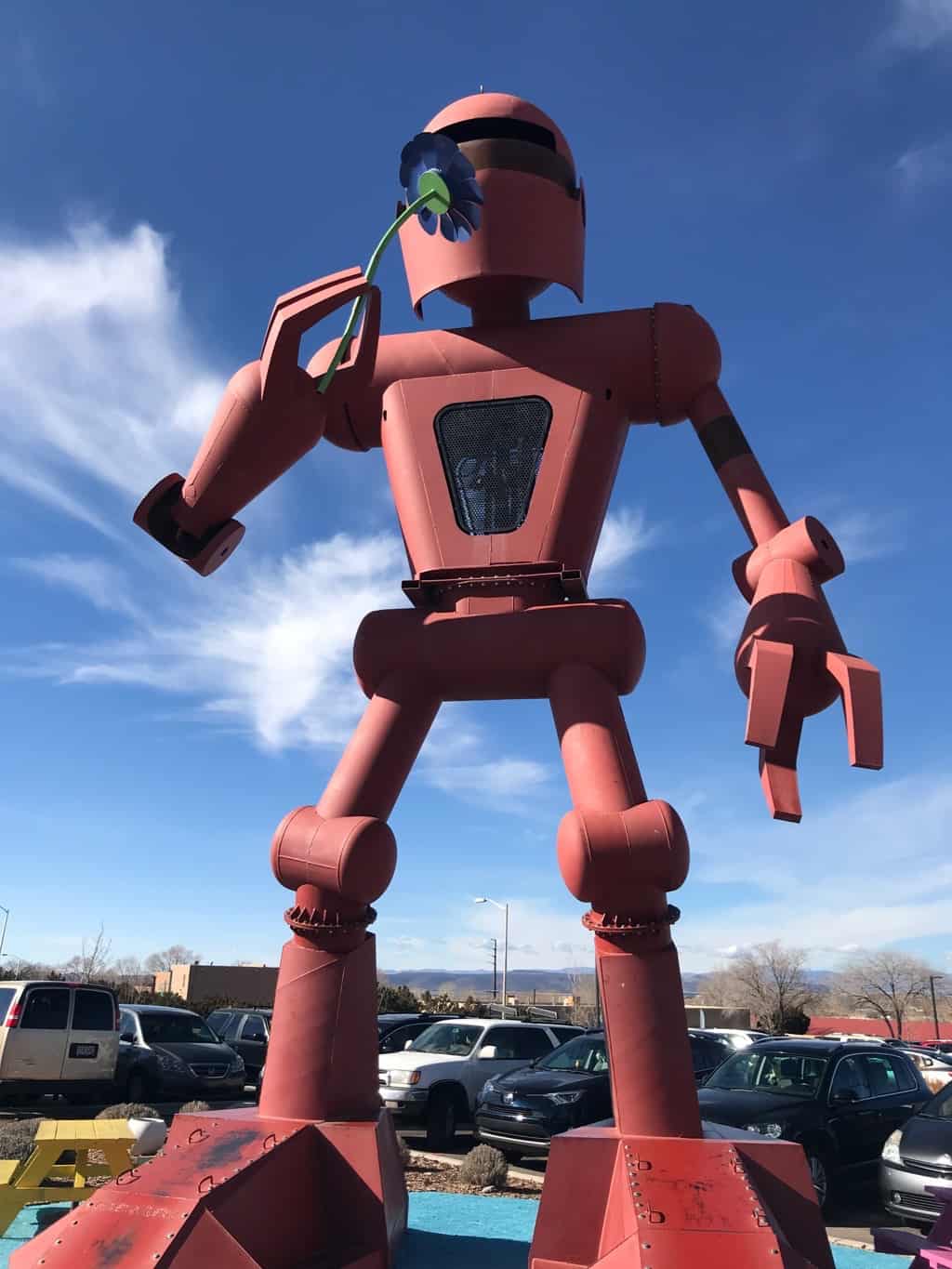 Not exactly free, but oh so much fun! The incredible George R.R. Martin (yes, of Game of Thrones fame) purchased an abandoned bowling alley to create the most magical place in Santa Fe: Mew Wolfe! With the help of nearly 200 artists, he and all his friends have completely transformed it into the House Of Eternal Return. Where you will discover a “multi-dimensional mystery house”.

You can literally walk through refrigerators and slide down dryers and then end up in another dimension! We spent hours wandering the entire mansion checking out each room. If you need to wind down there is a local pub that is located across the street.

And if you get a chance t go back to the Santa Fe Plaza in the evening, then stop by Ecco for a gelato or to Coyote Café’s Cantina for a drink in one of the best rooftop venues in Santa Fe. 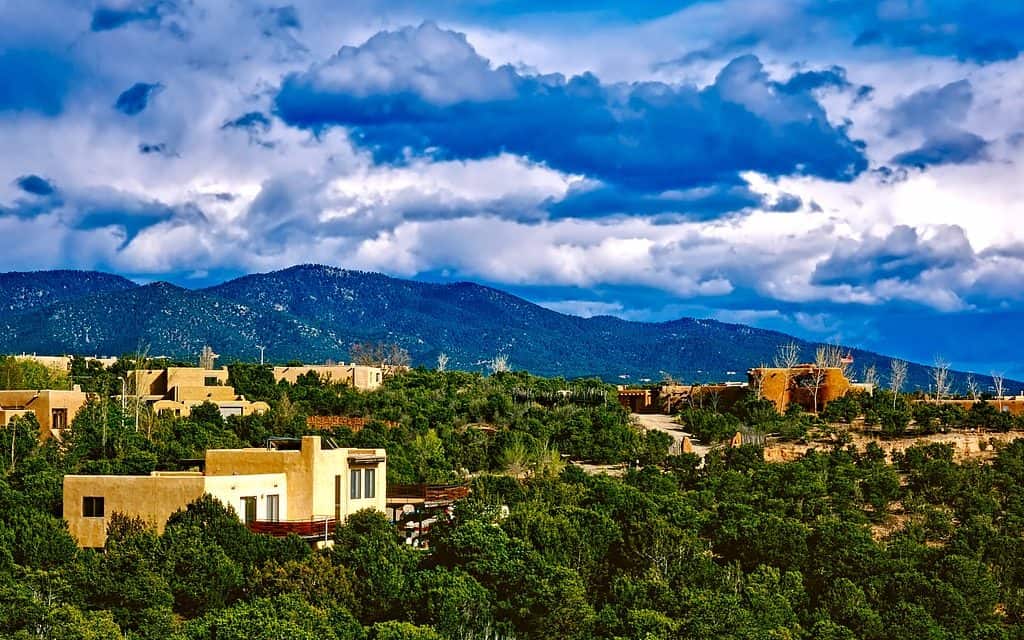 In a region with a history that extends back thousands of years, Santa Fe is uniquely suited to hosting experiences like no other city in the United States. A strong influence of Native American culture can be seen in the food, art, and architecture and highlights how, over centuries, the city has stayed true to its roots. A unique American Southwest experience awaits you as you walk among adobe giants in your never-ending hunt for the best free things do to on your next vacation. And Santa Fe is ready to deliver on your expectations. 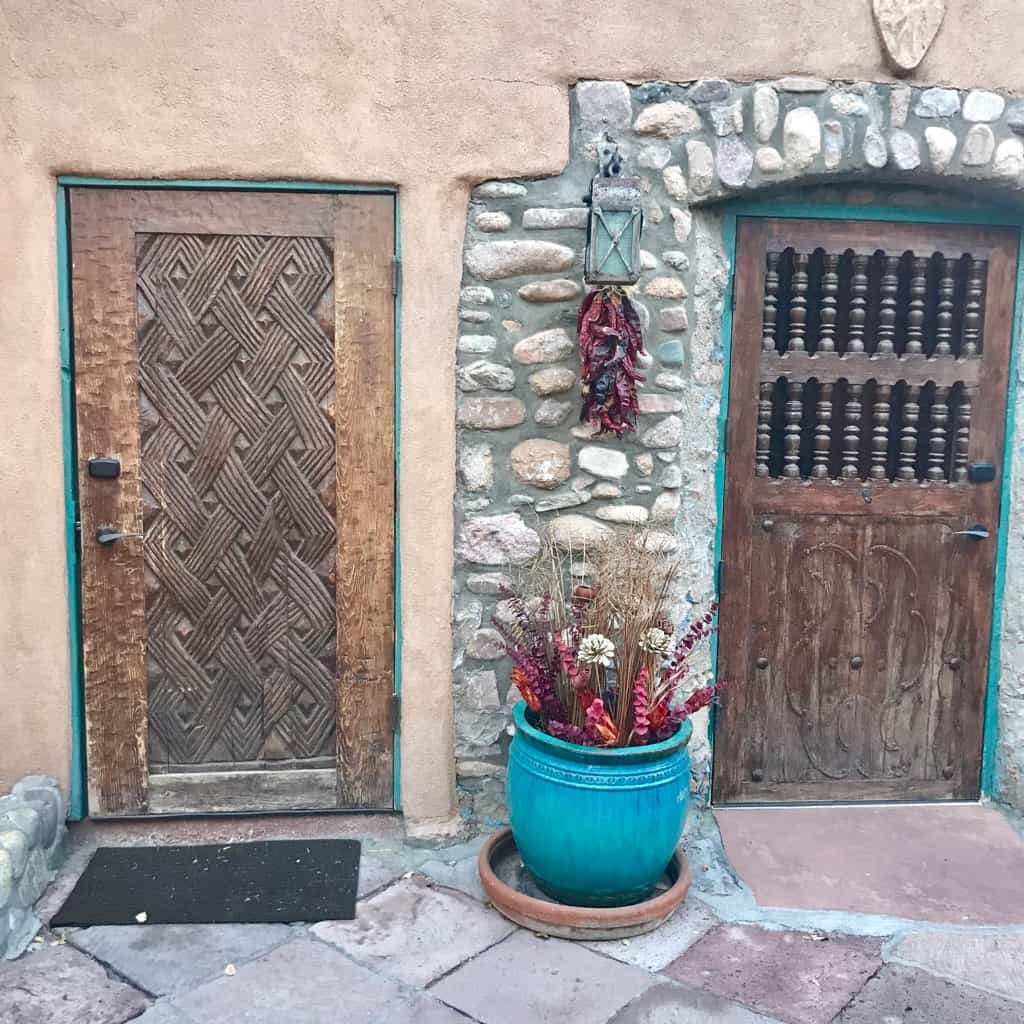 Disclosure: As is common in the travel industry, I was provided with accommodations, meals, and other compensation for the purposes of review by Santa Fe Tourism Board and The Inn of Five Graces. While it has not influenced my review, PointsandTravel.com believes in full disclosure of all potential conflicts of interest. All Photos were taken by the author/or were given permission from the photographer. Affiliate links may be located in this article.

I've wanted to visit Santa Fe for years. The colors, the architectural aesthetic and the food really look wonderful. Your photos have captured it beautifully. Sign me up!

Better yet, you and I should go together, it is a fabulous place to visit!