Nicknamed the “Little London of Scandinavia” or “the Greenest City”, Gothenburg Sweden has an alluring mix of lush green gardens and modern Nordic chic wrapped into one. With its 17th-century Dutch-style canals, nautical museums, trendy restaurants, and breweries, as well as fashion boutiques, it oozes a youthful bohemian and avant-garde vibe. Especially since it is home to 47,500 University of Gothenburg students. And it just happens to be the gateway to the main ferry stop to the islands of the outer archipelago of Sweden. How perfect is that?

If you want to get a good look at the city,  you can head on over to the main pedestrian street, Haga Nygata. It is lined with well-preserved 19th-century houses where shipyard workers used to live. This charming Haga area was once the city’s oldest district which dated back to 1648 AD. Today you will find lots of coffee houses, shops, fashion boutiques, and cafés.  During the weekends it even hosts popular farmer’s markets on its pedestrian-only streets. 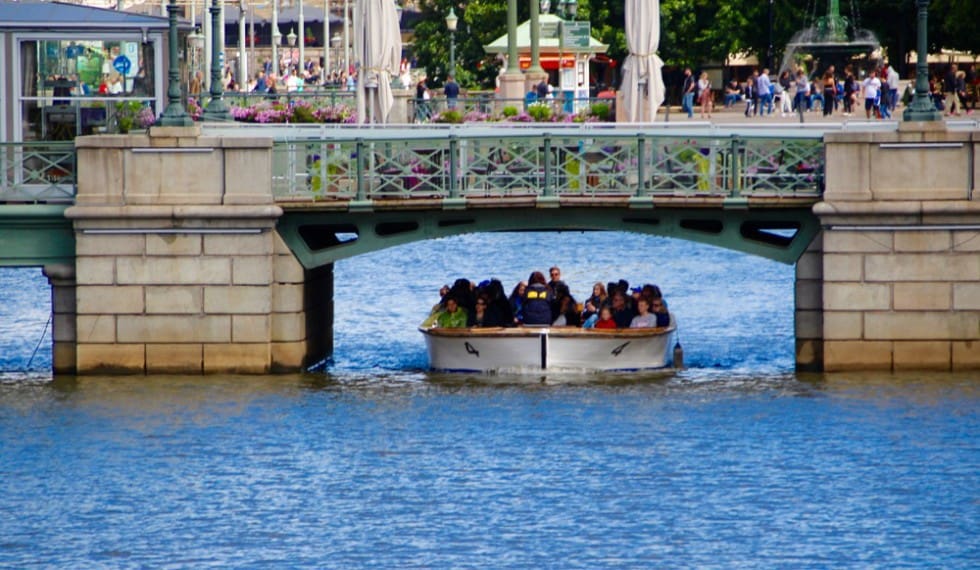 I easily hopped the train from Stockholm to Gothenburg. What I found here was a multitude of teenage boys everywhere. They were in the parks, they were on the streets, they were on public transportation. They typically were in groups, with matching shirts, and had smartphones in hand… playing Pokémon Go no doubt, as it had just been released that sunny day in Gothenburg when I had arrived. 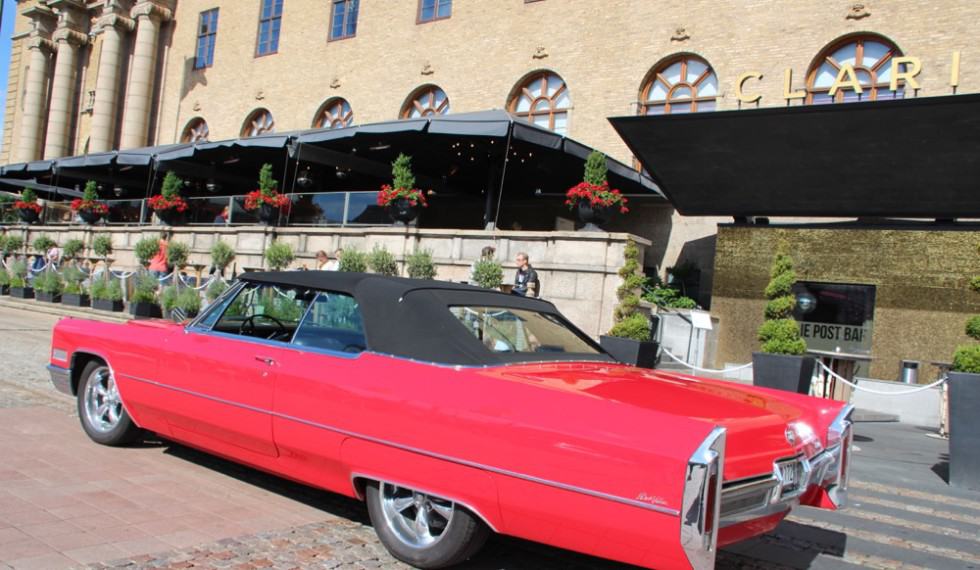 Later I found out that the boys were there for a different reason, as it happened to be the world’s largest football tournament that was being held here in Gothenburg! Oh, lucky me! With over 4000 clubs that come from all over the world, the city bulges with groups of teen boys in matching jerseys as they ride the public tram/bus system for free looking for “things to do in Gothenburg” on Friday before their festivities and tournaments begin. 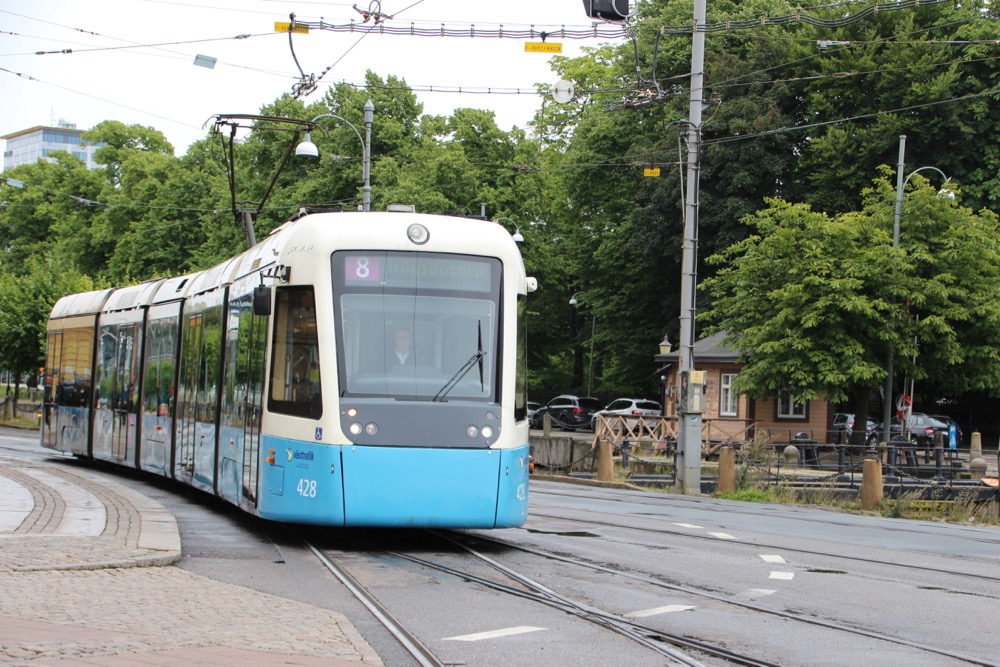 Gothenburg, Sweden: Gateway to the Islands

I start my day with a local tour guide who begins our tour at the train station. We make our way to the Choice brand hotel across the street, where the vRA-( or “raw corner restaurant”) is inside the Clarion Hotel with a tag line of “Swedish ingredients with Japanese flavors”. 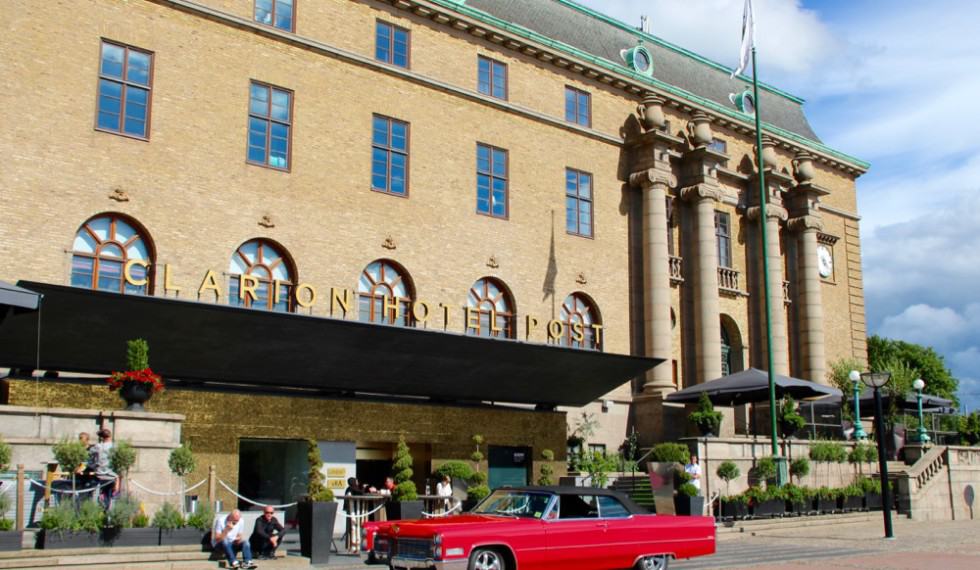 Apparently, this restaurant gets rave reviews and is a foodie destination with NYC connections. We stash our luggage at the hotel for the day and quickly, we walk across the tram’s track. We find ourselves at the bridge where we enter the Tradgardsforeningen Park System. Don’t worry, I couldn’t pronounce it either, like most Swedish names. 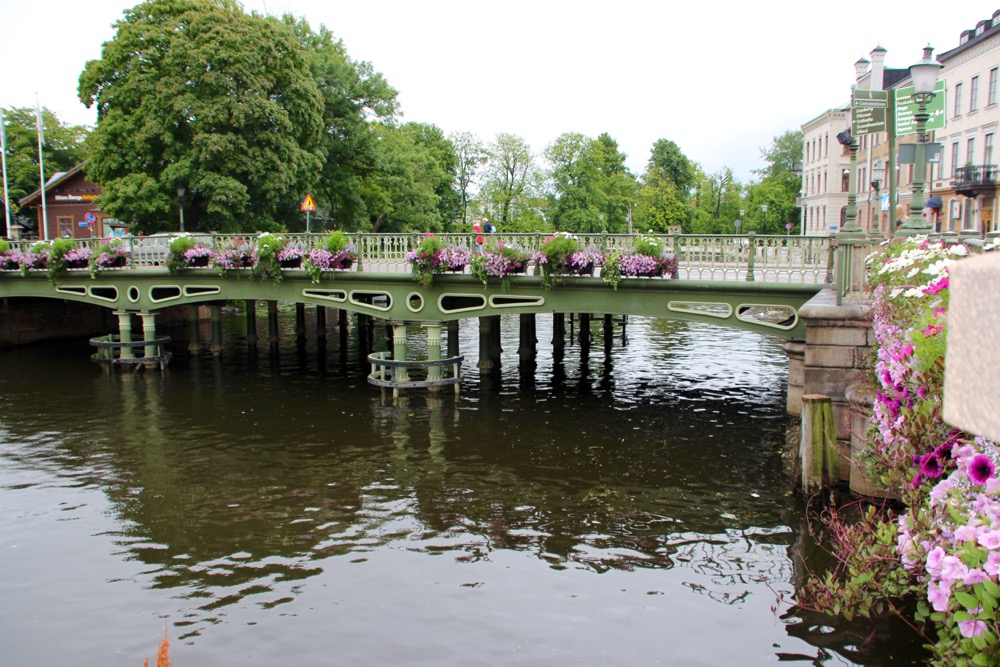 Star Shaped Fort with a Moat

It is here where the guide begins the story and history of Gothenburg. She states that it is physically laid out as a star-shaped fort. It was built in the 17th century with walls 7 meters thick and had a moat around it. Back in the day, there was a lot of fighting going on between the Danes and the Norwegians. The Swedes found themselves right dab in the middle of the two. The city has since grown past this star-shaped dividing line, where a majority of the wall came down or was removed, but they kept the moat intact as you can see it today while walking around. 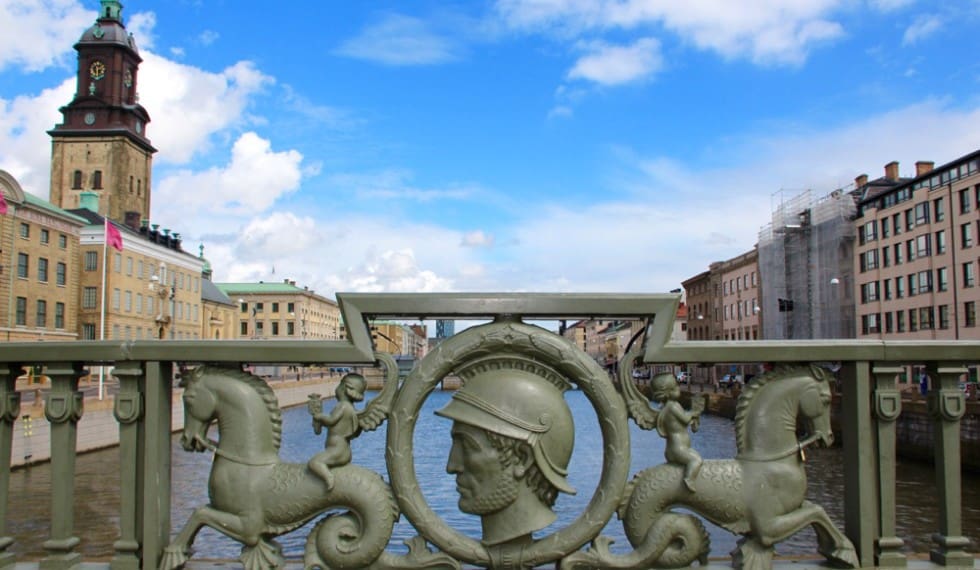 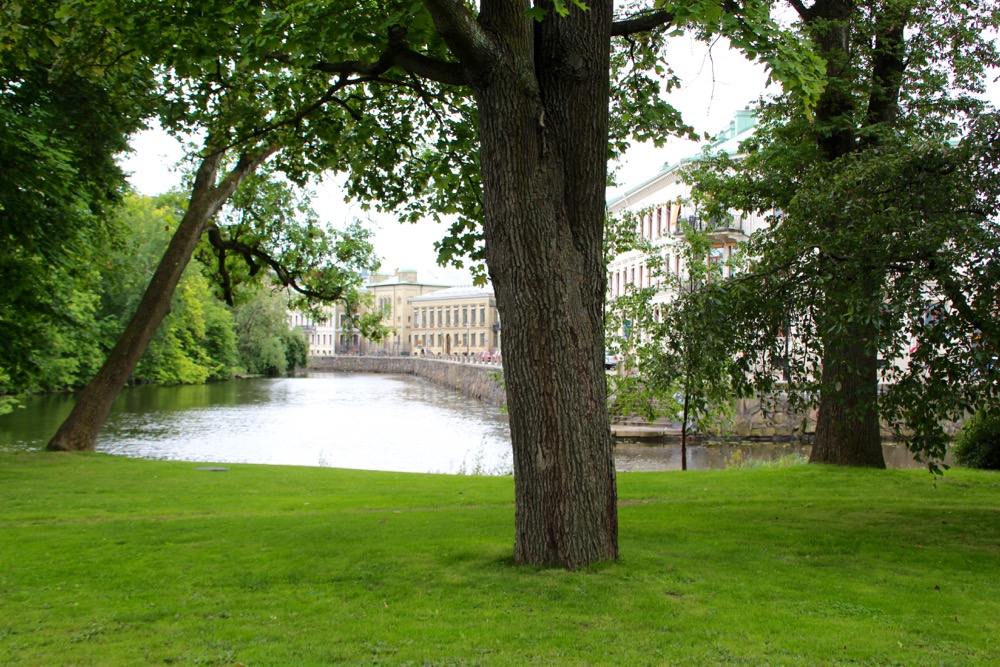 The guide mentioned that the 3 things that Gothenburg is most known for are its green spaces, its Nordic art from the 19th century at the Museum of Fine Arts, and as the main ferry stop to the islands of the outer archipelago of Sweden. 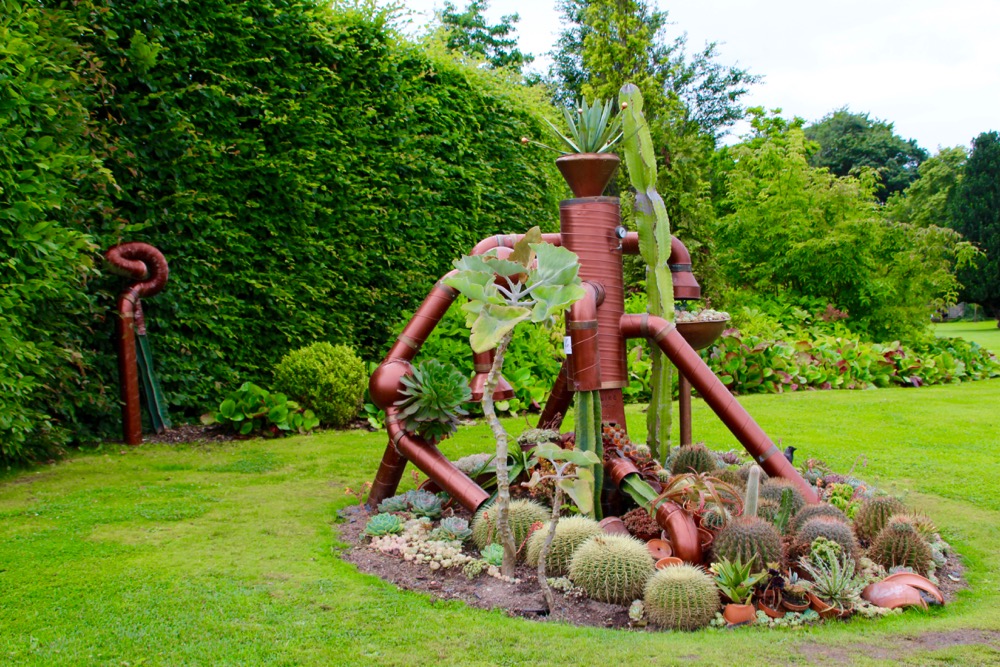 Apparently, the Nordic art she mentioned has recently influenced local interior design and fashion and can be seen throughout the city. I found the city to be a walkable city with plenty of green space experiences available. It is even bike-friendly and has electric bikes available throughout the city in a pilot project to offer more sustainable ways to get around the city. There is a city initiative with 17 gardens or “rooftop growings”, where locals are growing greens on their roofs! 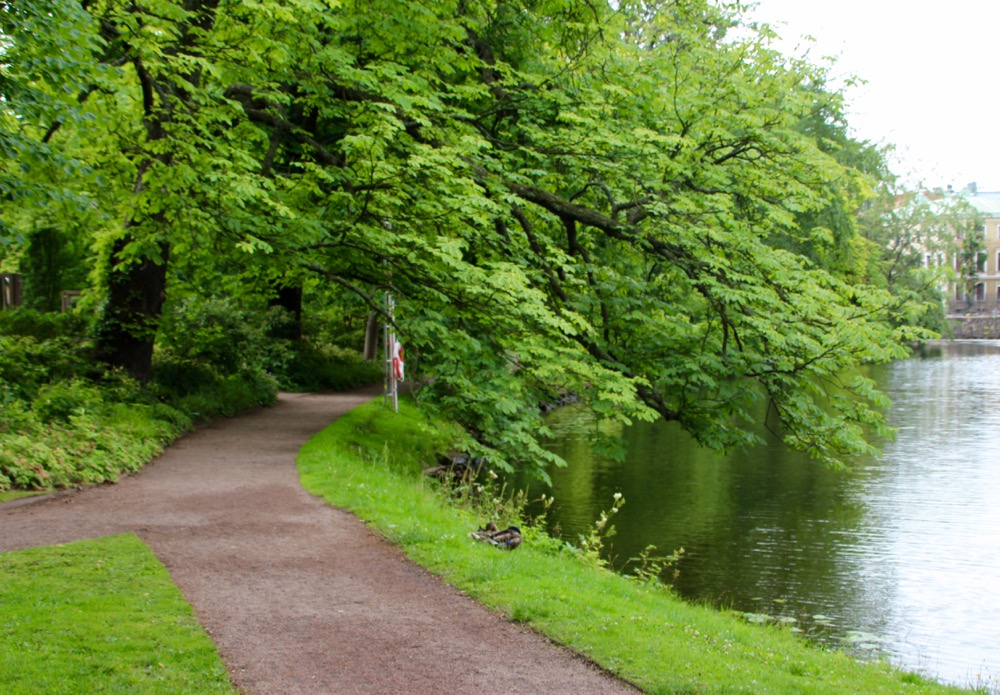 The city is “in the green”, is a saying the guide liked to say.

For a panoramic view of Gothenburg’s red rooftops of Haga, you can climb the steps to the top of the hill overlooking it called Skansberget, up here you will see the 17th-century fortress Skansen Kronan, which is now a military museum.

Order a Half Special and a Cold Chocolate Drink!

The guide mentioned a few local foods and customs of the local Gothenburg flavor. One “must eat” food while in town is called the “half special”. So what it is? It is a sausage inside of white bread with mashed potatoes and mayonnaise. This is to be eaten with a cold chocolate drink. These can be found at “dive” restaurants while standing up on almost every corner. 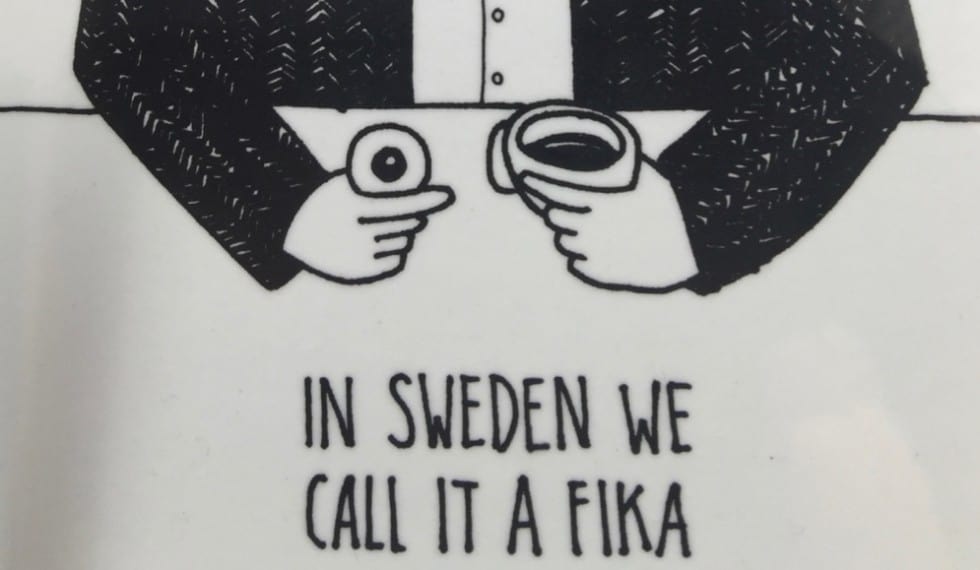 Don’t forget, of course, Swedish meatballs are always a part of a typical Swedish menu and can just about be found anywhere, as well as herring and boiled potatoes. Also while in town, you have to head over to the Haga to have a “fika” or “a coffee with a pastry”. Fika is a daily social ritual, a Swedish state of mind. It is also a delicious stop for caffeine and sugar together that most Swedes have with their friends or workmates daily. 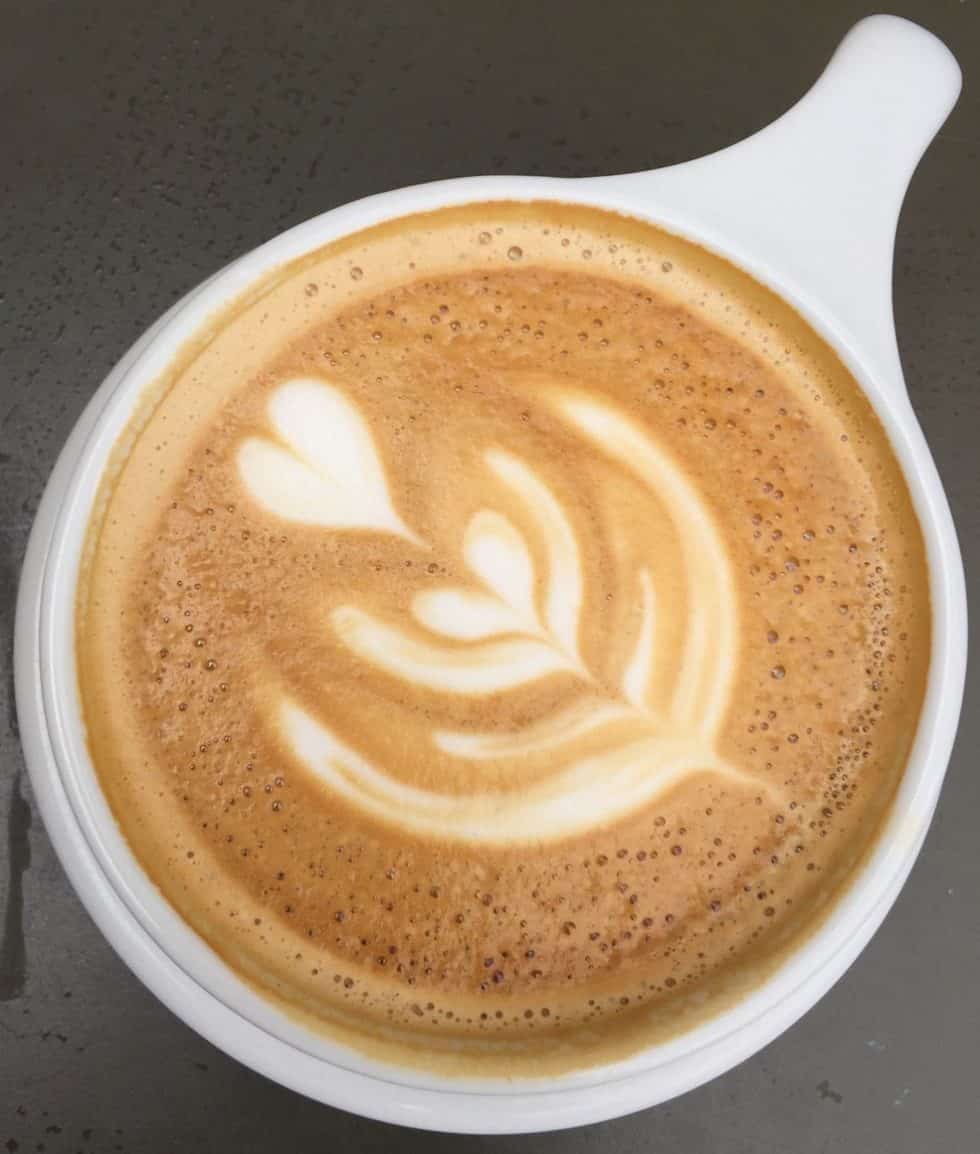 We took a walk back over to Haga that dates back to the 1600s, where today, as mentioned before, it is a charming area of cobblestone streets full of outdoor cafes, antique shops, and local shopping with streets filled with indie “art” graffiti. 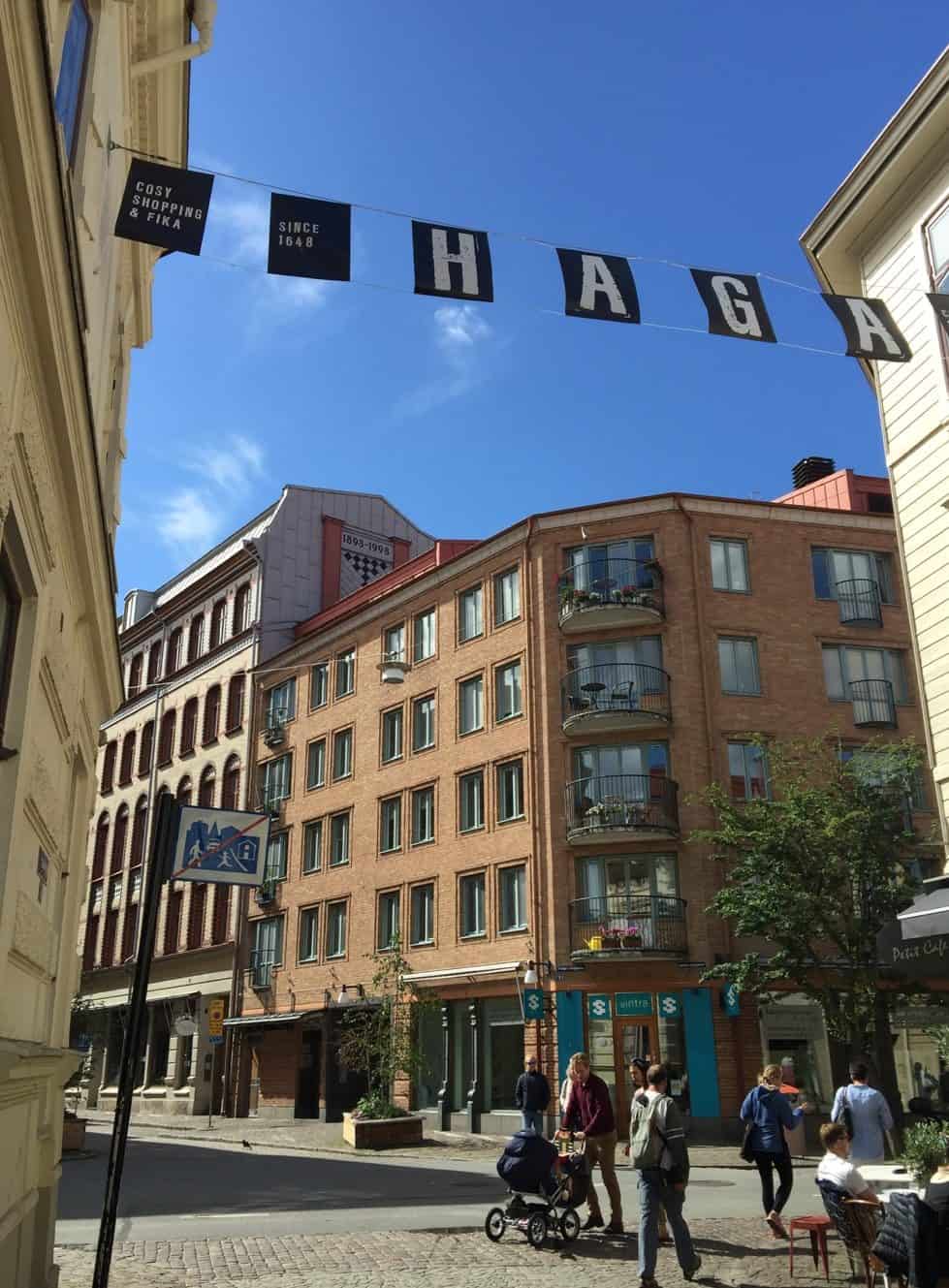 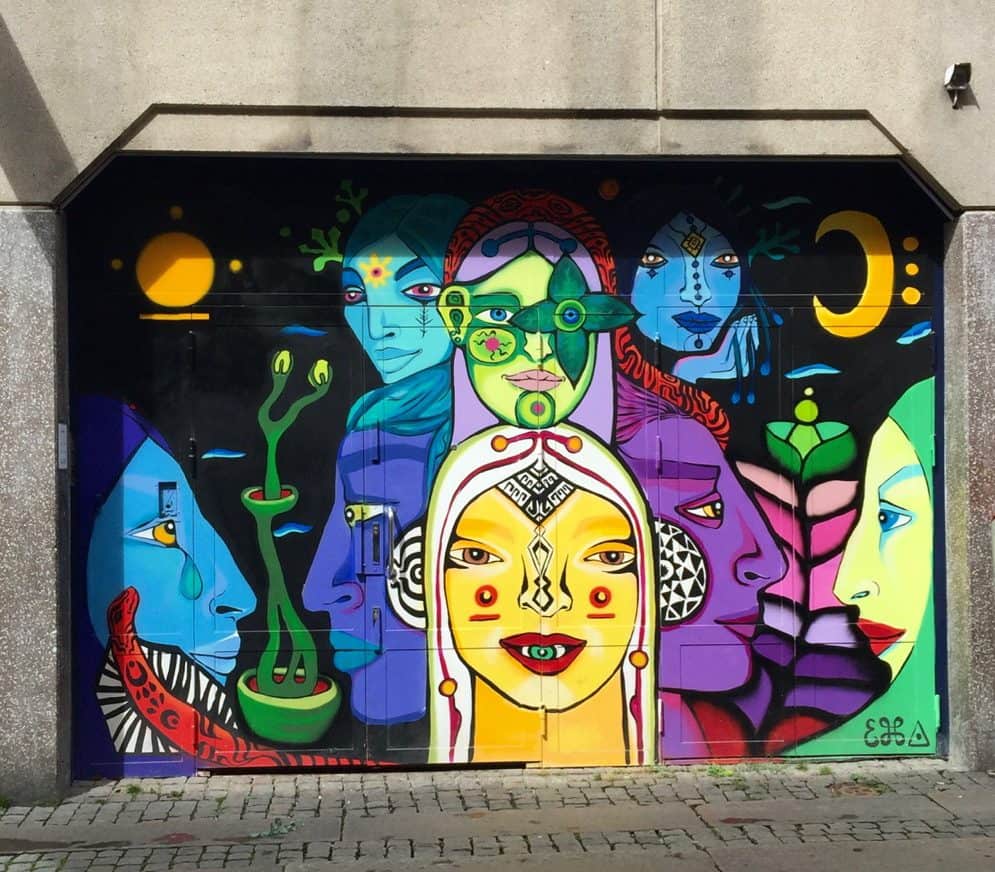 We actually ate at Da Matteo restaurant in the middle of a short burst of rain, where apparently, these downpours happen quite often during the summer. They come and go quickly in a short period of time, so always dress in layers and bring a rain type jacket with a hoodie that can be tucked away when the sun is shining. 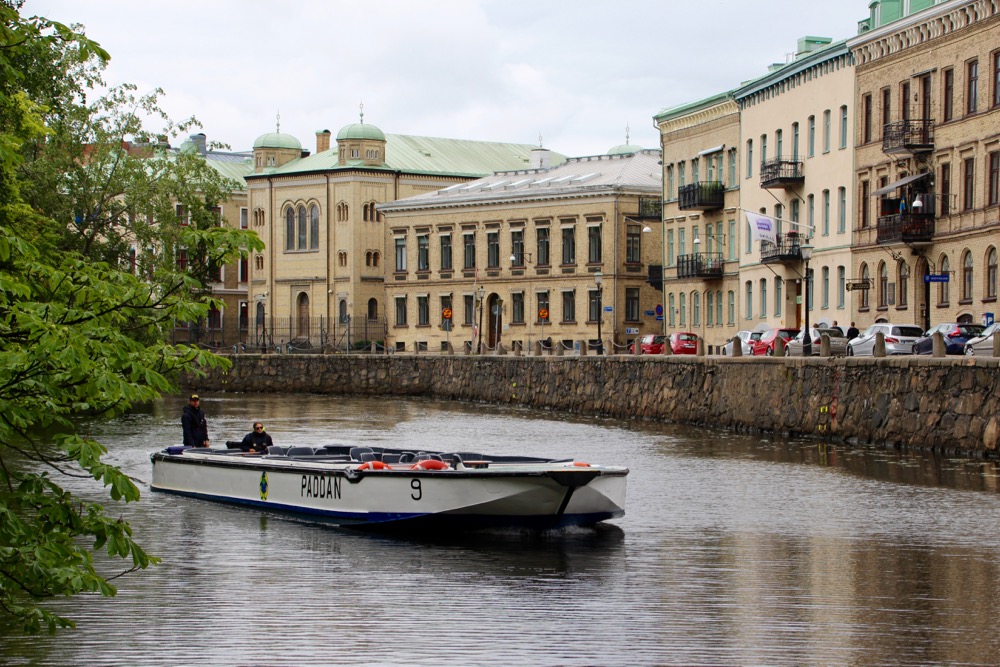 Gothenburg is Home of the Volvo

Another interesting aspect of Gothenburg is that it is the home of Volvo since the 1920s. They still have a Volvo pickup program where you can order your brand new Volvo, take it for a spin on the factory floor and drive it around Europe for up to 15 days. It will then be shipped back to you in the USA at a savings of about 8% off the sticker price! 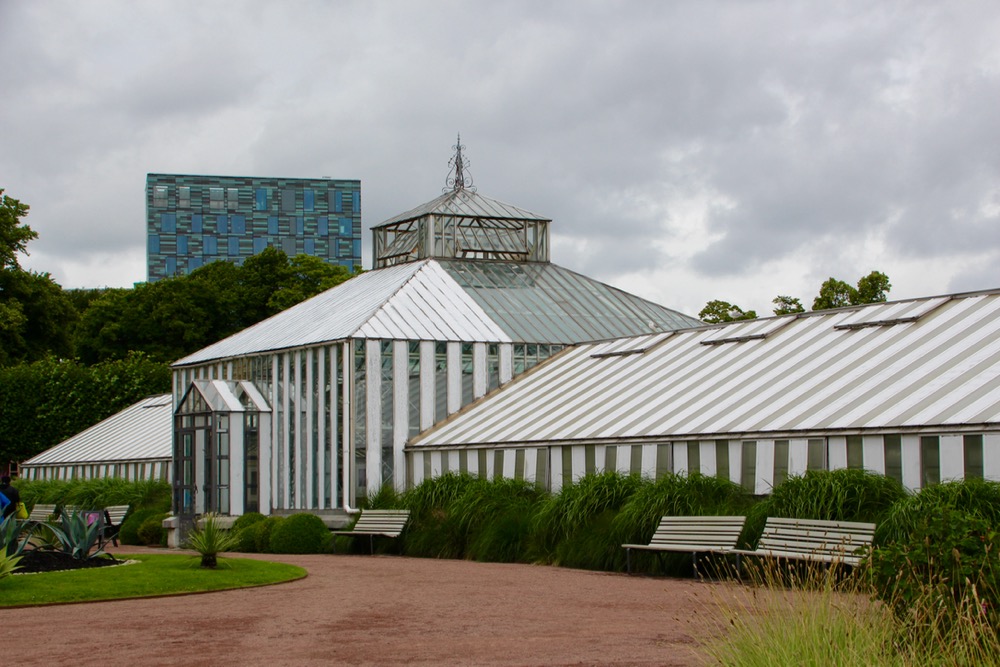 I found plenty of things to do in Gothenburg while I was there and can recommend it as a gorgeous town to visit while in Sweden.  I also enjoyed spending some time there before making my way to the outer banks, which you can read about in my article called “A Midsummer Night’s Dream Through Western Sweden’s Outer Banks“. It was super fun to write! 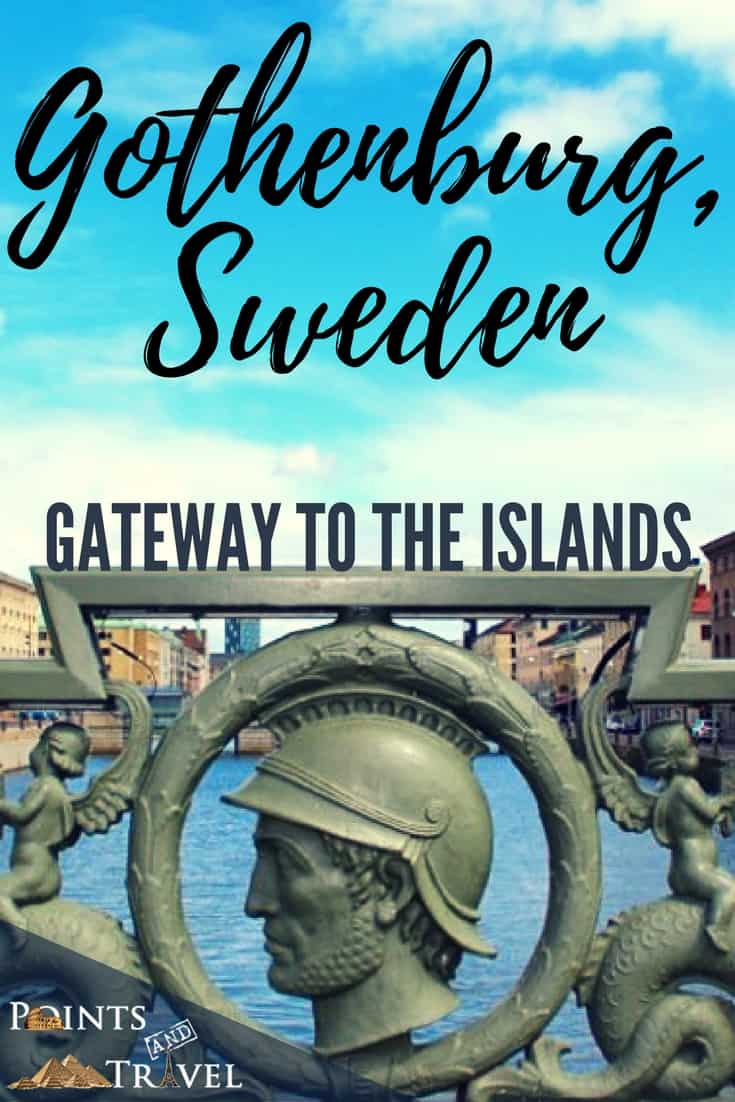 Disclosure:  The writer believes in full disclosure and wanted to let you know that this trip was provided by the city of Gothenburg.  As is common in the travel industry, the writer was provided with accommodations, meals, and other compensation.