Located in Pisa, Italy, the Leaning Tower of Pisa (Italian: La Torre pendente di Pisa) or the Tower of Pisa (La Torre di Pisa) is one of the most famous leaning towers in the world. It is the bell tower of the Cathedral of Pisa that has been under construction for almost 200 years, owing to a succession of wars as a symbol of the power of the maritime republic. 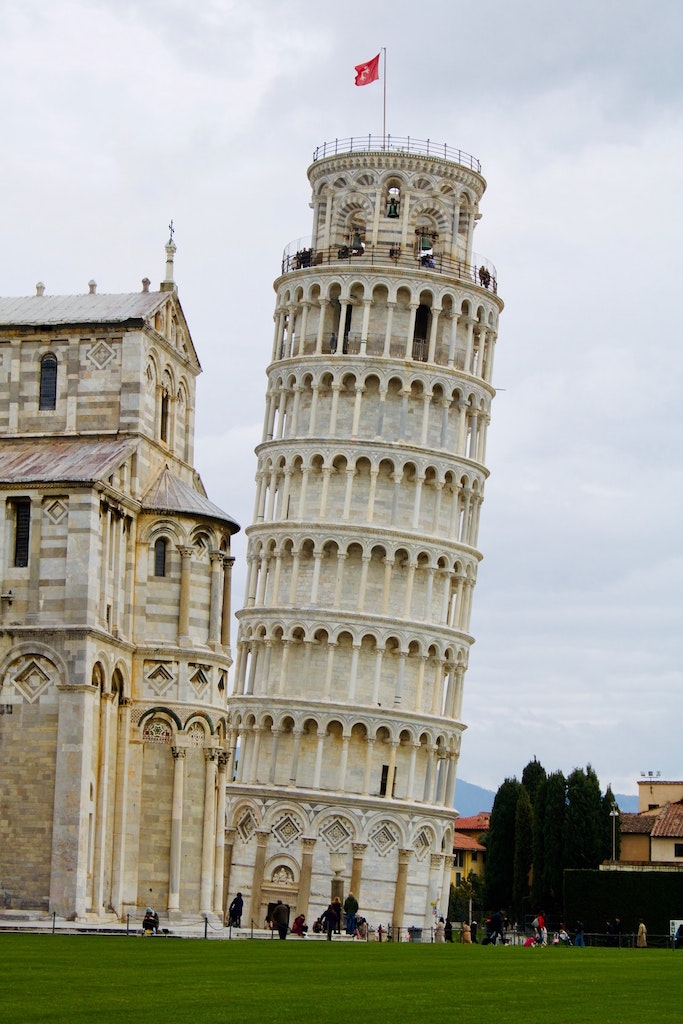 The Leaning Tower is located just behind the cathedral in the Italian city of Pisa. It is the third structure in Campo Dei Miracoli (Field of Miracles). Although only half the height of the Washington Monument, this marvel of medieval engineering is most likely one of Europe’s tallest bell towers. The seven bells were arranged in a circle, with one for each note of the musical major scale.

The city of Pisa has been history since the Early Middle Ages in Medieval Europe. Pisa’s incredible UNESCO world heritage site is an iconic figure that may represent humanity’s remarkable capacity to defy nature on occasion. It astonished many spectators. The tower defies gravity despite its leaning instability, and it continues to astound people even today! 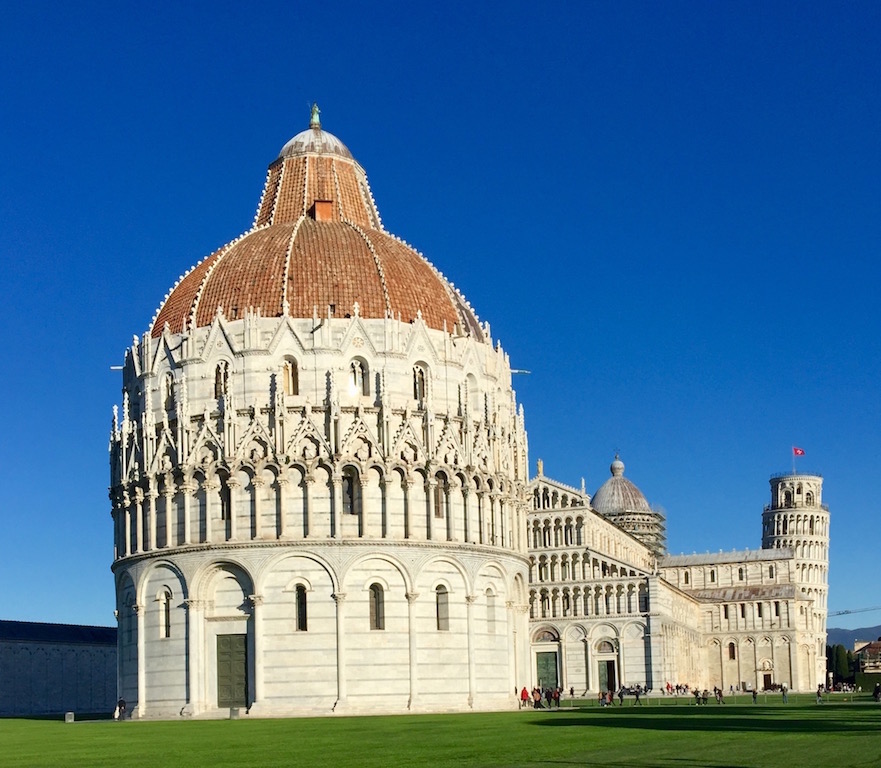 Tower At a Glance

The tower contains eight stories, including a chamber for the bells. The bottom story is made of 15 marble arches. The surrounding tower has 30 arches in each of the following six stories. The gothic elements of the bell chamber, which has 16 arches, are the final story.

The construction of the tower started when Dona di Bernardo, a widow of the 12th century, donated 60 silver coins to the “opera campanilis petrarum sancte marie” in 1172, according to the history of the Tower.

The white marble freestanding bell tower has geometrical patterns drawn from Arab countries. It is one of Tuscany’s most significant examples of Romanesque style, along with the other three ancient buildings on the site. Even the famous galileo galilei dropped two cannonballs of varying weights from the tower to illustrate his revolutionary notion that their falling speed is independent of their weight. 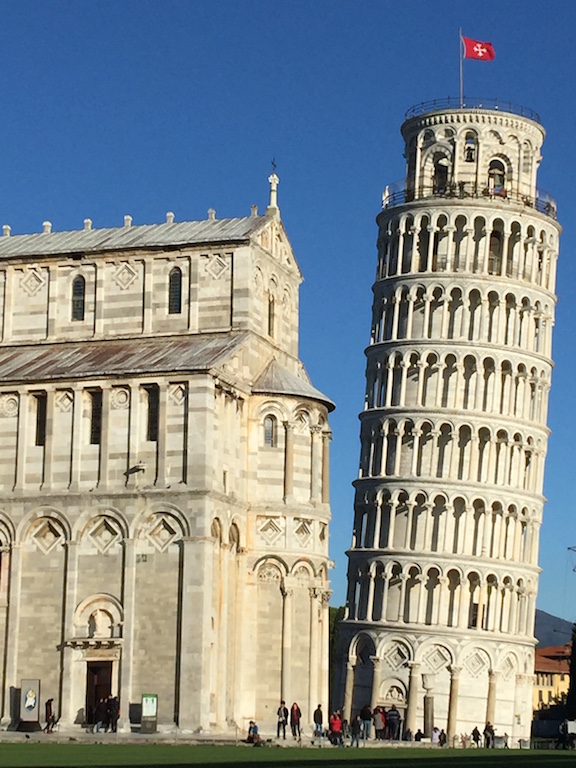 Even though the tower took more than two centuries to build, it began leaning to the south side immediately after the onset of construction. Because the soft underlying soil of fine sand (unstable soil) and a lack of a solid foundation played a vital role for the tower to lean before construction on the third story was finished.

Because the tower leans and has an uneven weight distribution, Medieval Europe architects (under Giovanni di Simone) took additional steps to build successive floors higher than the others, to provide a bit of a safer angle to complete the unfinished construction. Then, it kept on leaning at a rate of almost two mm each year for 800 years until the giant bells were taken away and it was firmly embedded into the ground.

Trying to Get to a Vertical Position

The Italian government asked for assistance in 1964 to keep the tower from leaning without detracting from its tilt for historical significance. So a multinational group of specialists was put together, and they met at Azores Islands.

The Nazis even used it as an observation post during World War II. 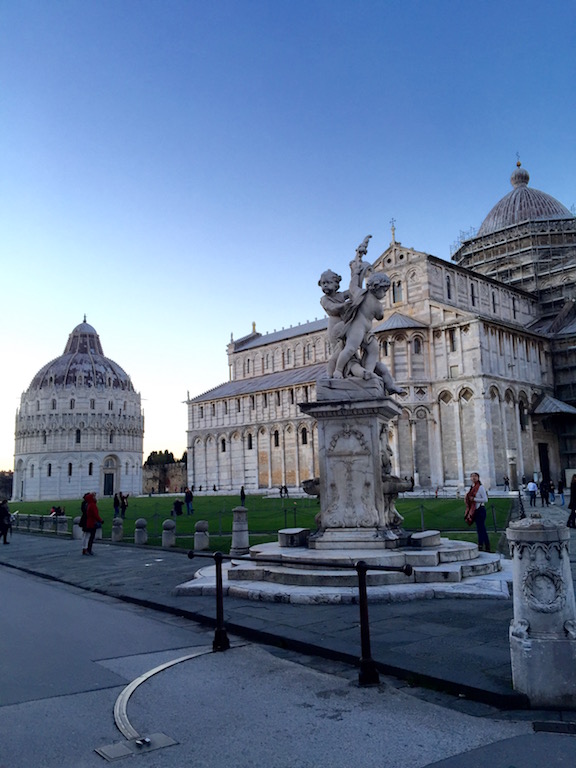 The tower was finally closed to the general public in January 1990 after more than two decades of research. However, the tower was reopened to the public in 2001 after a decade of corrective reconstruction.

The final solution of preventing the tower from the verge of collapse was to slightly straighten it to a safer angle to resist seismic activity, removing 38m3 of dirt from below the raised end or top of the leaning tower of pisa base.

The Tilt has Finally Stopped!

The famous tilt has been finally stopped, according to the president of the international committee for the protection of the tower at Turin University, Michele Jamiolkowski, an engineer of Polish origin.

However, according to Nunziante Squeglia, an engineering professor at the University of Pisa and head of the surveillance group of Italian engineers and experts, the tower is slowly straightening! The general secretary of the Opera PrimaZiale Pisana, Gianluca De Felice, also endorses this notion! 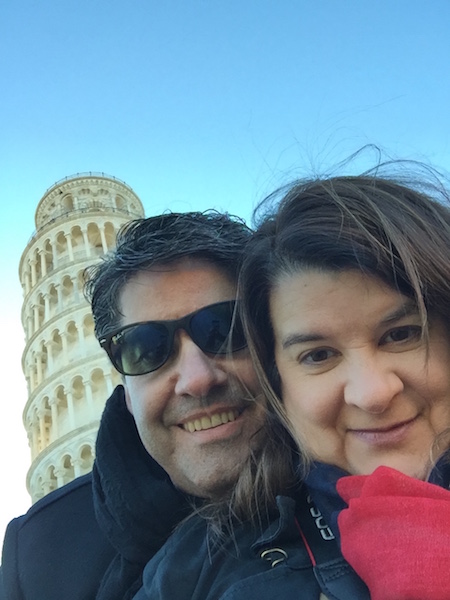 The winter season from December to January is a beautiful time to view the illumination and bright décor for Christmas and the new year. The peak season, however, occurs throughout the summer months of June to September. Therefore, you may save money and avoid crowds during the lean spring season, which lasts from April to May.

What You Can Do at the Tower

Going up the Tower

Once a tour guide explains the tower’s history and some interesting facts, you’ll go inside and be greeted with refreshing air as you start your climb from the first floor to the second floor and then to the top of the famous Tower of Pisa, which leads to the top via 297 spiral staircases. The tower is 56 meters tall and has eight levels. Six floors are open galleries for spectacular views of the countryside.

The bell-chamber is the tower’s final floor (originally added by Tommaso di Andrea Pisano), and each of the below six floors (second floor to the seventh floor) contains 30 archways surrounding it. 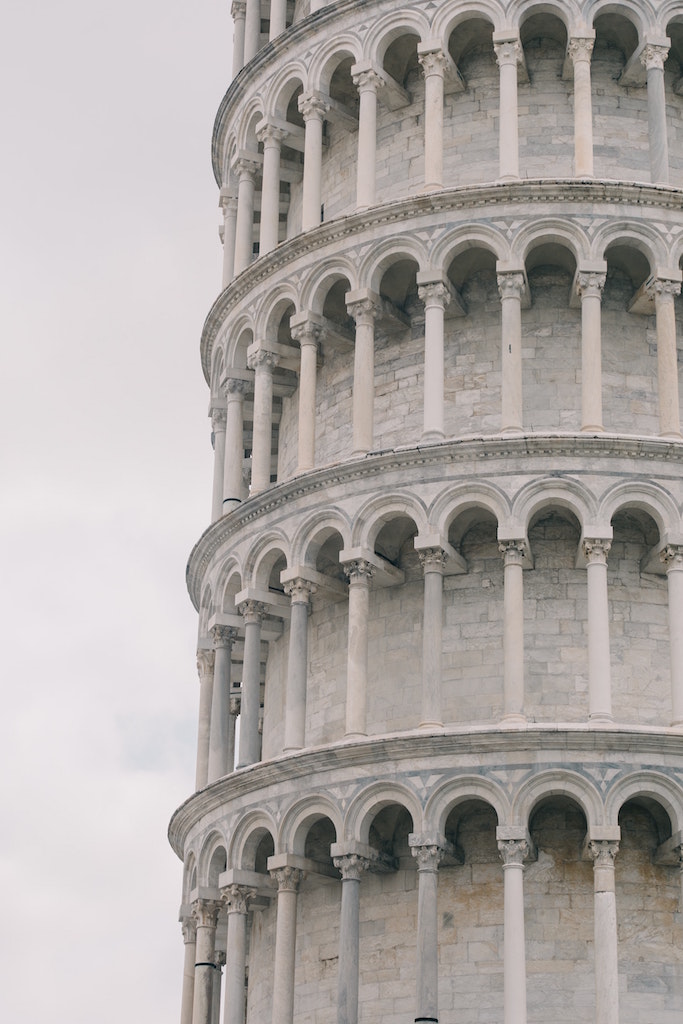 Visit Pisa Duomo and the museum

The Pisa Duomo, or Pisa Cathedral, is free entry if you have bought a ticket to see one of the other monuments of the Cathedral square. Its significant bronze-framed doors, with bonanno pisano’s casts, that are pretty stunning. Bonanno left Pisa in 1185 to Monreale, Sicily, where he stayed for a year before returning and dying in his home town. In 1820, his burial chamber was discovered at the base of the tower. 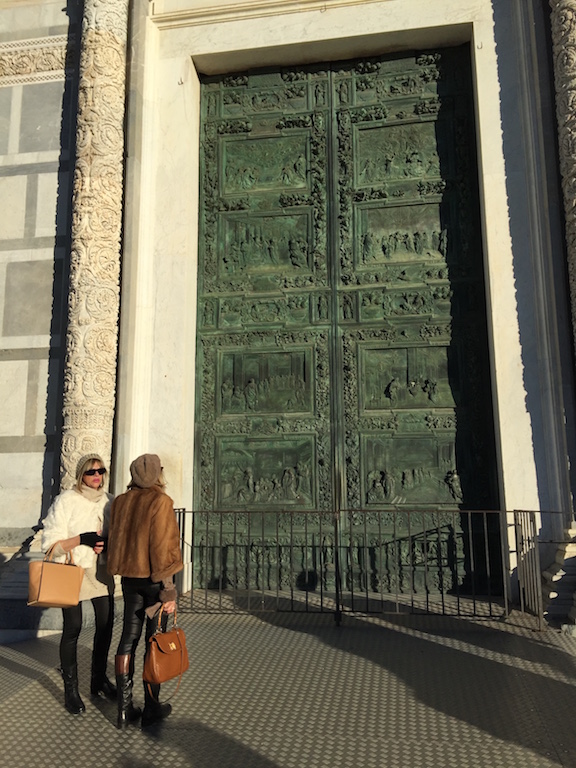 The Cathedral Complex of Pisa contains a magnificent mosaic of Christ in Majesty dating from the 14th century. A pulpit and tomb of a carved marble have Emperor Henry VII’s (Holy Roman Empire) remains.

The circular baptistery started in 1152 and took many years of restoration work because of financial constraints, notably during Pisa’s conflicts with Siena and Florence neighbors. 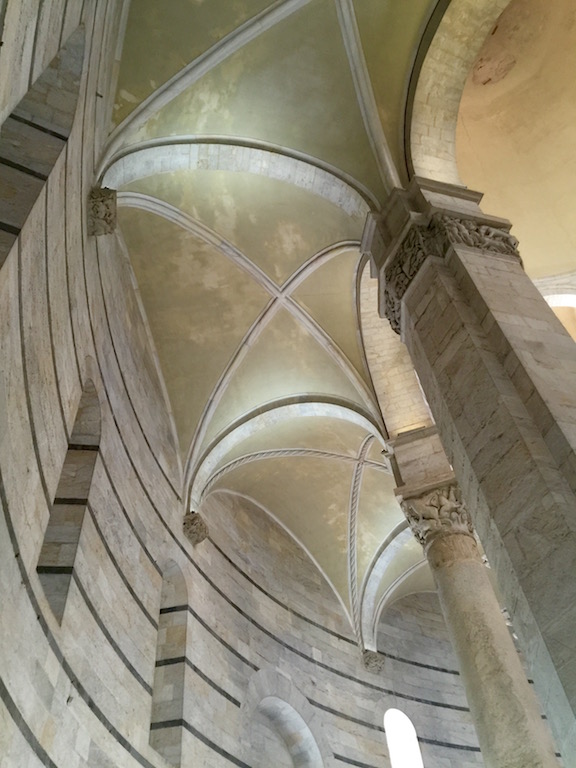 The baptistery is renowned for its superb acoustics and was constructed in a Gothic style. The lion-footed columns that support the geometrical pulpit are said to be amazing as they crouch.

The baptistery’s pulpit reliefs, created by Giovanni Pisano and Nicola in the 14th century, include some famous arts including the Last Judgment. 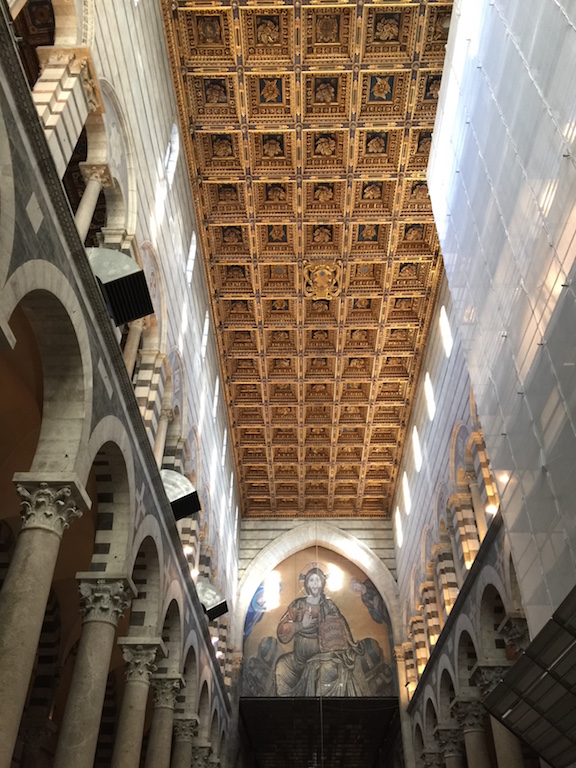 Roam around the Graveyard (Camposanto)

The extended structure features a lawn enclosed by arcades that house Renaissance noblemen’s graves. The portico formerly housed Roman relics and medieval frescoes, most of which were devastated or severely damaged by artillery strikes during World War II.

The Sinopie Museum is located in a past hospital and houses the sinopias, or original parchment pictures, previously housed in the Camposanto.

Other Popular Tourist Attractions at the Piazza del Duomo

Several unique places go unnoticed in the Piazza Dei Miracoli (Square of miracles) in the shadow of the monuments inside:

The fancy little Gothic church, which is decorated with plenty of spires and pinnacles, is worth seeing on the banks of the River Arno.

The place is a magnificent museum displaying the decades of restoration and sculptures from the Tuscan period between the 12th and 15th centuries.

The impressive double stairway leading to the entrance and the projecting roof add to the majesty of this outrageously magnificent palace.

The Palazzo Giuli Rosselmini Gualandi in Pordenone boasts a fascinating range of paintings and other Italian artists from the 16th to 20th centuries.

Where to Stay in Pisa near the Piazza

If you’re planning on spending the night or two in the beautiful city of Pisa, we recommend a few nearby well-managed decent hotels. 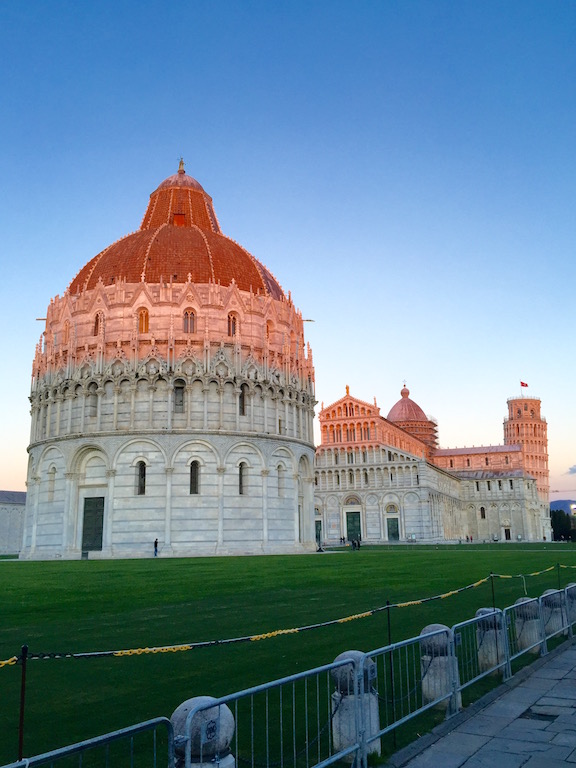 The Helvetia Tower, the Bologna Hotel Pisa, and the Pisa Tower are budget-friendly hotels with excellent facilities. B&B La Sicilia, a Tavola is a fine dining place on the north side of the tower.

How to get to the Leaning Tower

Around 50 miles from the city of Florence, Pisa is a modest city of about 100,000 inhabitants. If you’re traveling from Florence, the train to Pisa costs around $10, and private transportation like a taxi would be a little higher. You may also travel to Pisa on a Florence GT coach, transporting you to the city and returning you on that very day. The Tower is within walking distance from the train station in Pisa.

Tickets to the Leaning Tower of Pisa

The cost of a ticket to enter the Leaning Tower of Pisa starts at Euro 26.50. However, it is possible to reserve this for a period of up to 20 days ahead. After that, you choose the number of monuments and museums you want to visit, and the price varies accordingly.

The good news is you can purchase your tickets online from the official website since there are only a restricted number of each day available for every half hour, divided among the time. There’s a good chance you won’t even get to stand in line to buy them and still not make it up to the top of the tower.

The Tower of Pisa, the Pisa Baptistry, and the Opera del Duomo Museum are open Monday through Friday from 8 AM to 8 PM, and Camposanto is accessible from 8 AM to 10 PM. The Duomo is generally available from 10 AM to 8 PM on weekdays, although it is only open in the afternoons on Sundays. 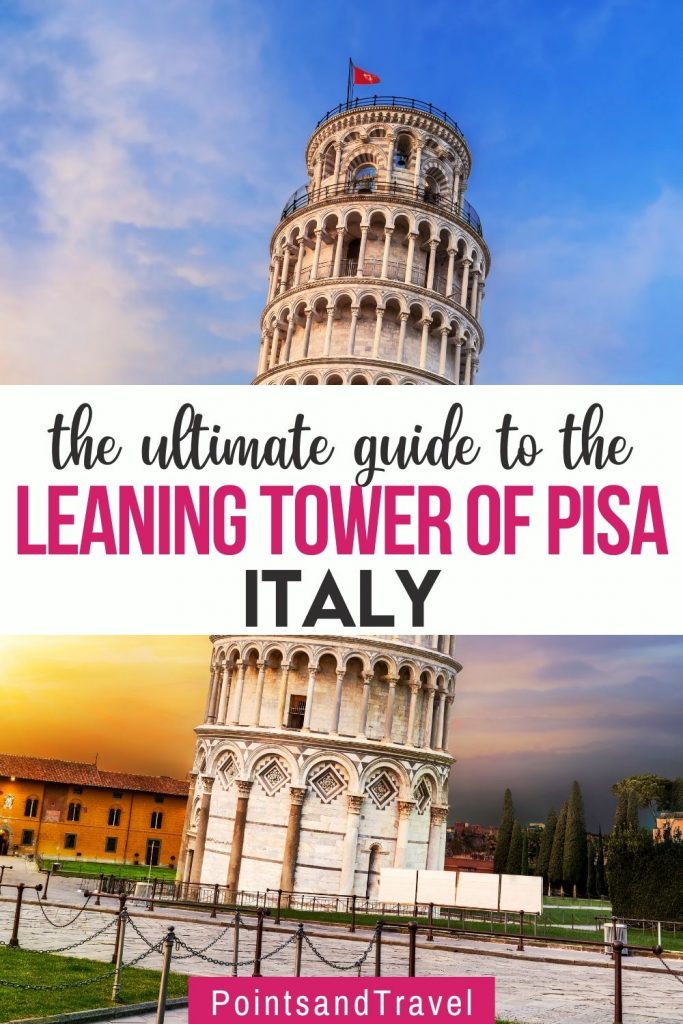 I hope that you visit the Leaning Tower of Pisa in northern Italy near Tuscany. Have you been to the leaning tower of Pisa?