Often dubbed the “land of smiles”, Thailand is every bit the “land of temples” as well. Thailand is home to no fewer than 40,000 Buddhist Temples (yes, forty thousand!). Bangkok is a great place to start exploring these temples and the place to get familiar with Thai culture. The Thailand temple of Wat Arun is a great place to start and is arguably the main temple in Bangkok. Wat Arun is one of only six temples of the highest grade in the first-class section of Royal Temples, and therefore one of Thailand’s most revered temples. 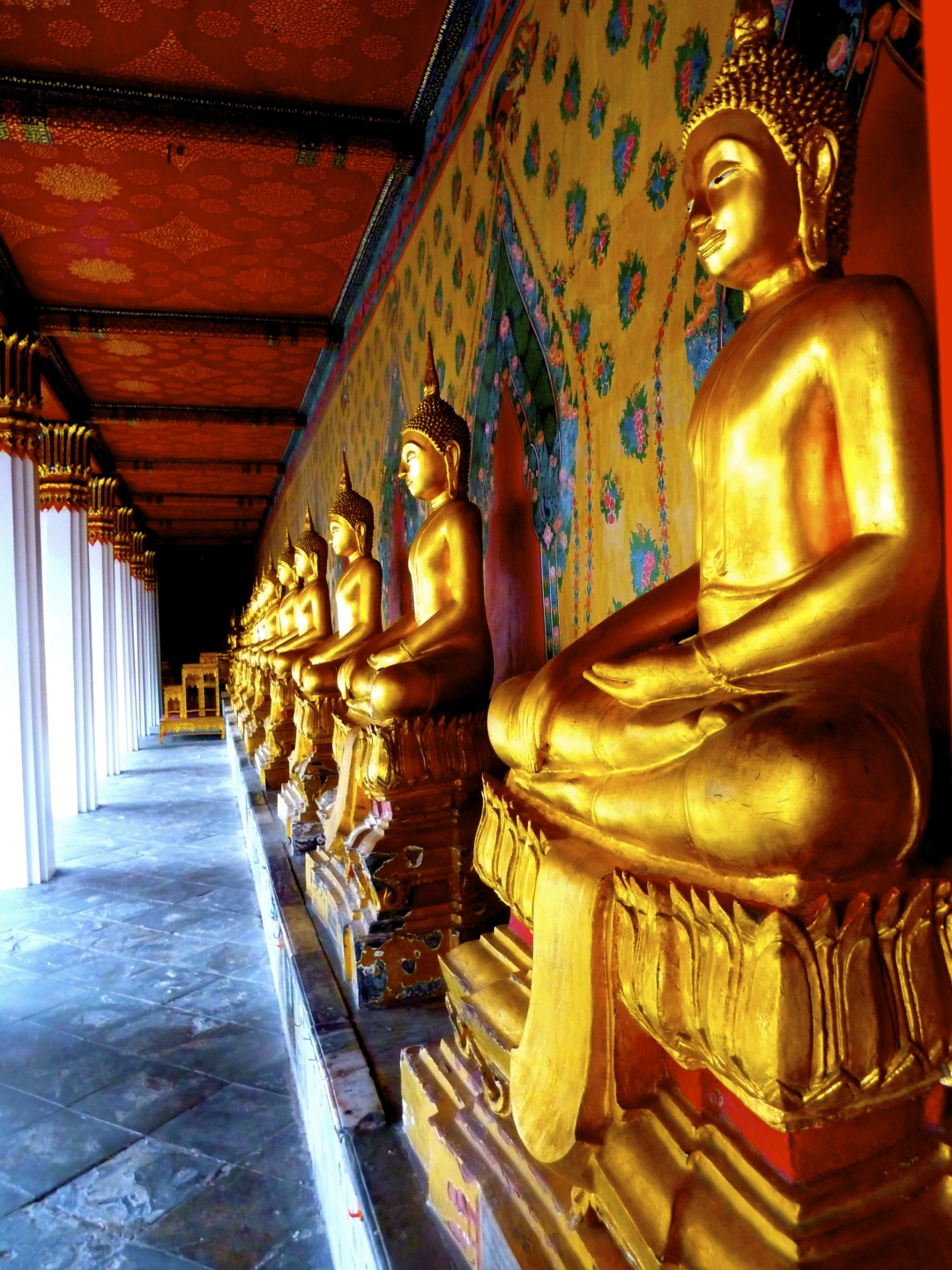 ✦ One of Bangkok’s Oldest Temples

Wat Arun is one of the few temples that predate the founding of Bangkok during the start of the Rattanakosin era in 1782. Its tower (prang) dominated the skyline around the Chao Phraya River during the early days of Bangkok and today is one of the most impressive sights on the river.

Here’s what you need to know about Bangkok’s beautiful Temple of the Dawn and how to plan your visit to Wat Arun. 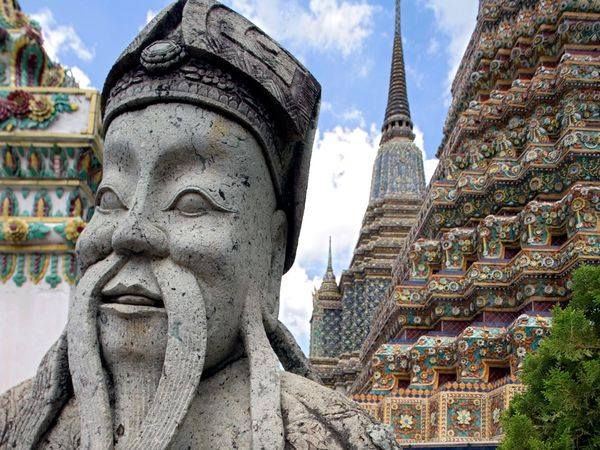 One of the most recognizable landmarks in Bangkok is the Temple of Dawn, also known as Wat Arun. I would say this is a “don’t miss” stop along your ride down the west bank of the Chao Phraya River.

✦ How to Get to Arun Wat

The temple itself is located on the west bank of the Chao Phraya River, in Thonburi, almost directly opposite Wat Pho. So it is very easy to get to. From Saphan Taksin boat pier you can take a riverboat that stops at pier 8. From here, a small shuttle boat takes you from one side of the river to the other for only 3 baht (less than a dollar!).

Saphan Taksin Boat Pier is well connected to the Chao Phraya Express Boat at Sathorn Pier. This is where you can find many boats to take you to pier 8 within about 30 minutes. After getting off the boat, hop on a small shuttle boat or ferry that takes you to the opposite side of the river. Soon you will see Wat Arun in front of your eyes. 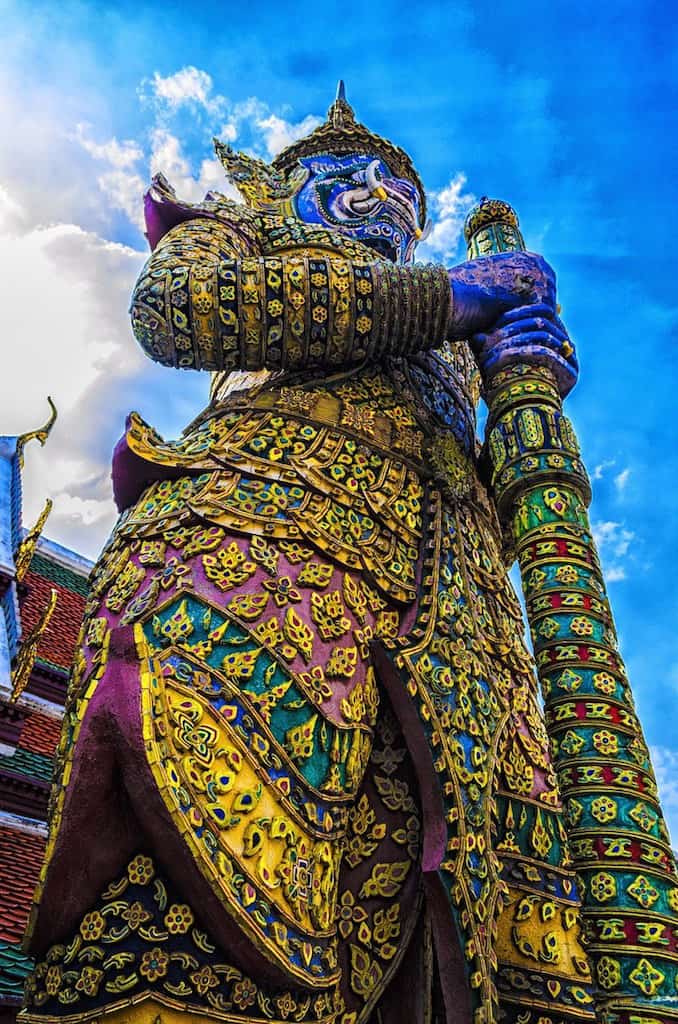 You’ll need several hours to fully take in and appreciate Wat Arun, and the best time to visit is as close to opening time as possible to have a bit of time to yourself in the temple before the tour groups arrive. Climb up the central pagoda for views of the Chao Phraya River in the morning light as Bangkok comes to life.

Bonus Tip: The public service boat functions during the day time hours. I recommend that you take the boats with the orange flags, as they come by every 15 minutes and cost 15 baht (regardless of the distance). 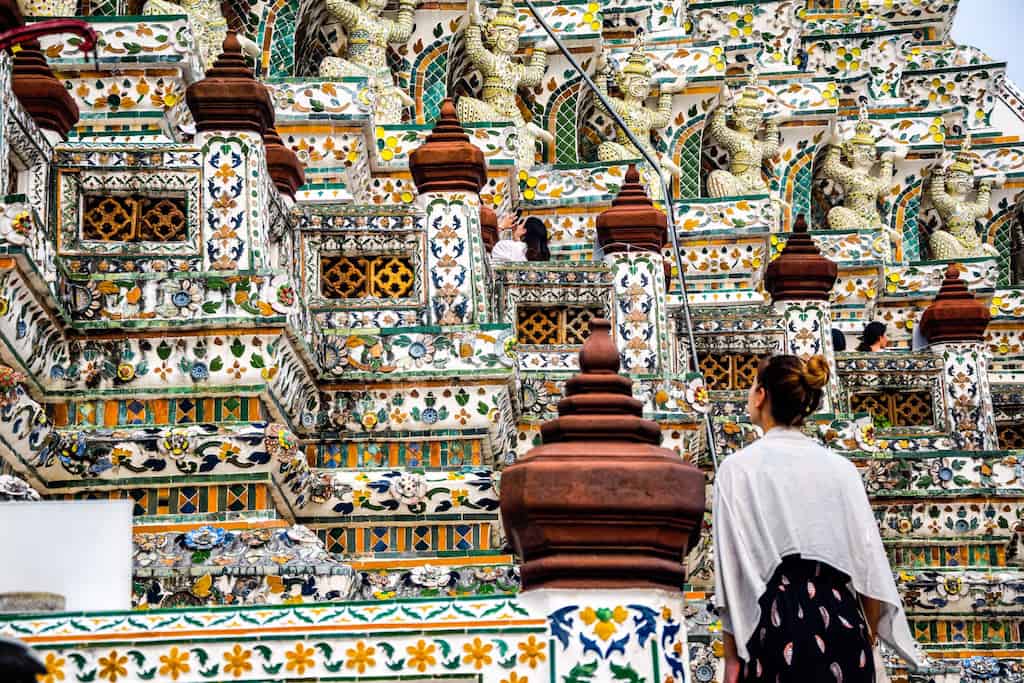 And if you are interested in seeing other temples throughout Thailand, you can visit this guide about how to make your way through Thailand. Just try and stop me with a laugh!

Wat Arun is personified by the radiation of the rising sun, that is why it is called the Temple of Dawn. It has a symmetrical design featuring a central prang (or tower) and four large prangs surrounding it. The main feature is the central tower over 230 feet tall with its encrusted porcelain, which I personally find fascinating.

Take a look here at a close up of the porcelain: 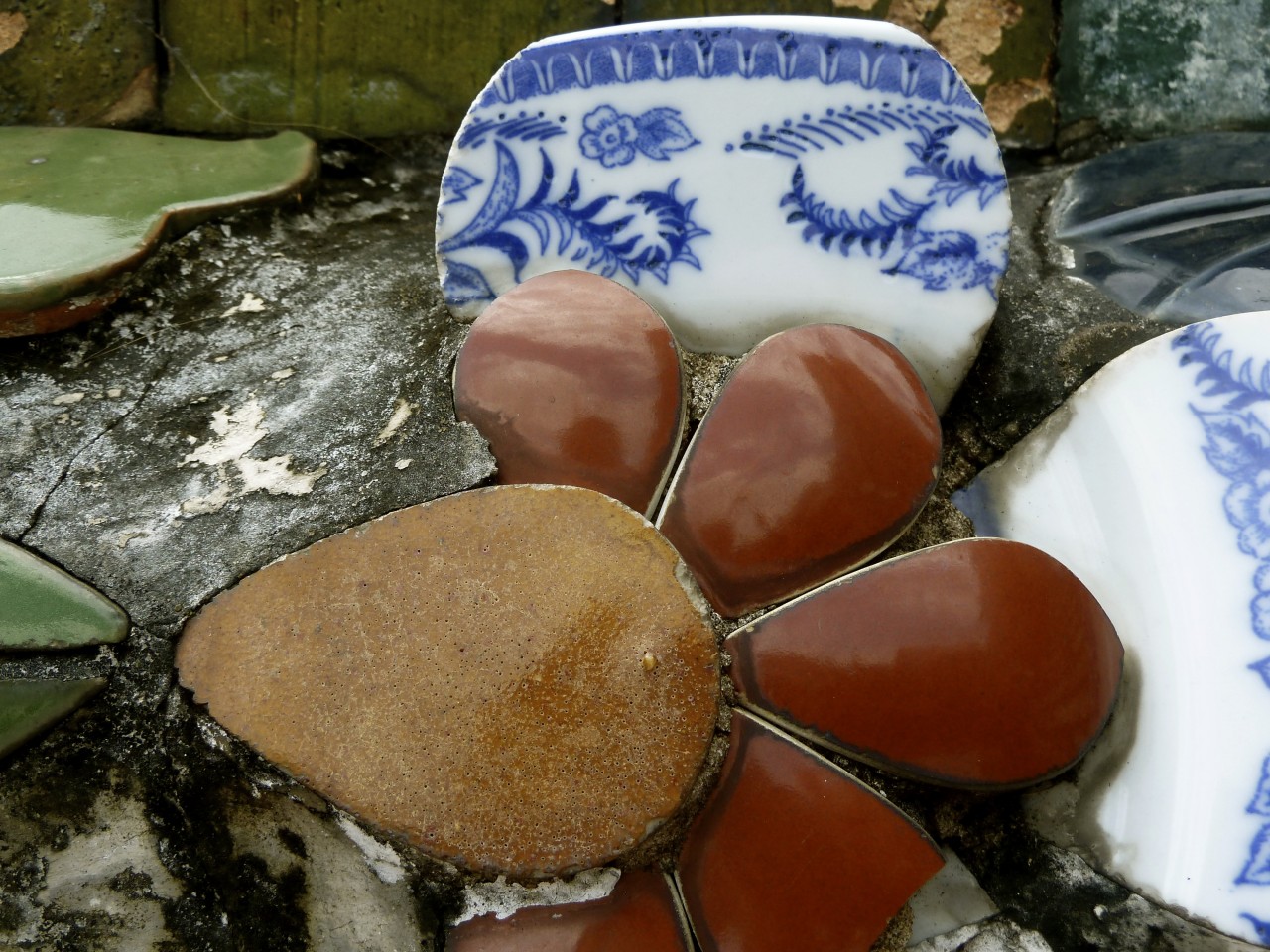 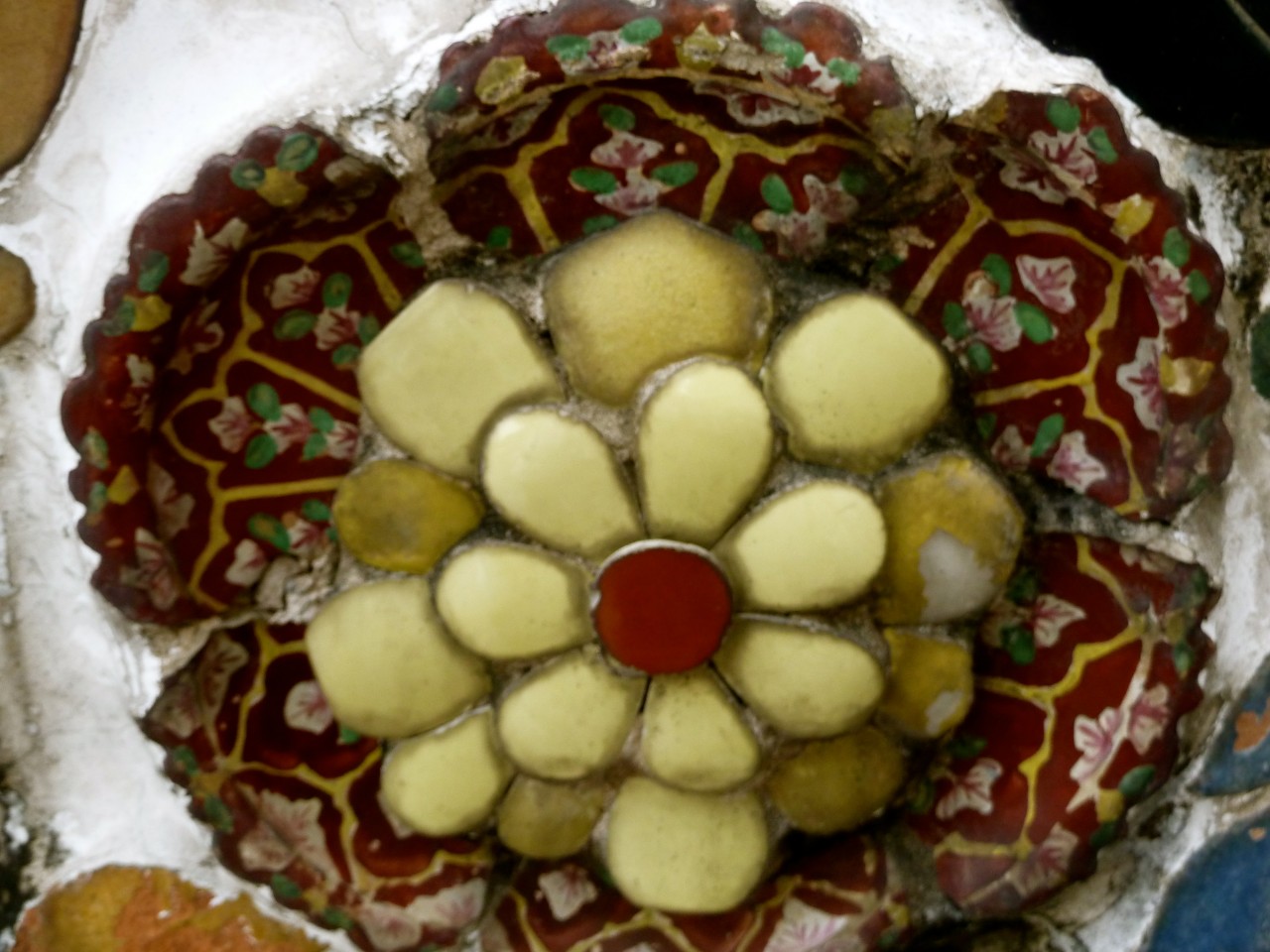 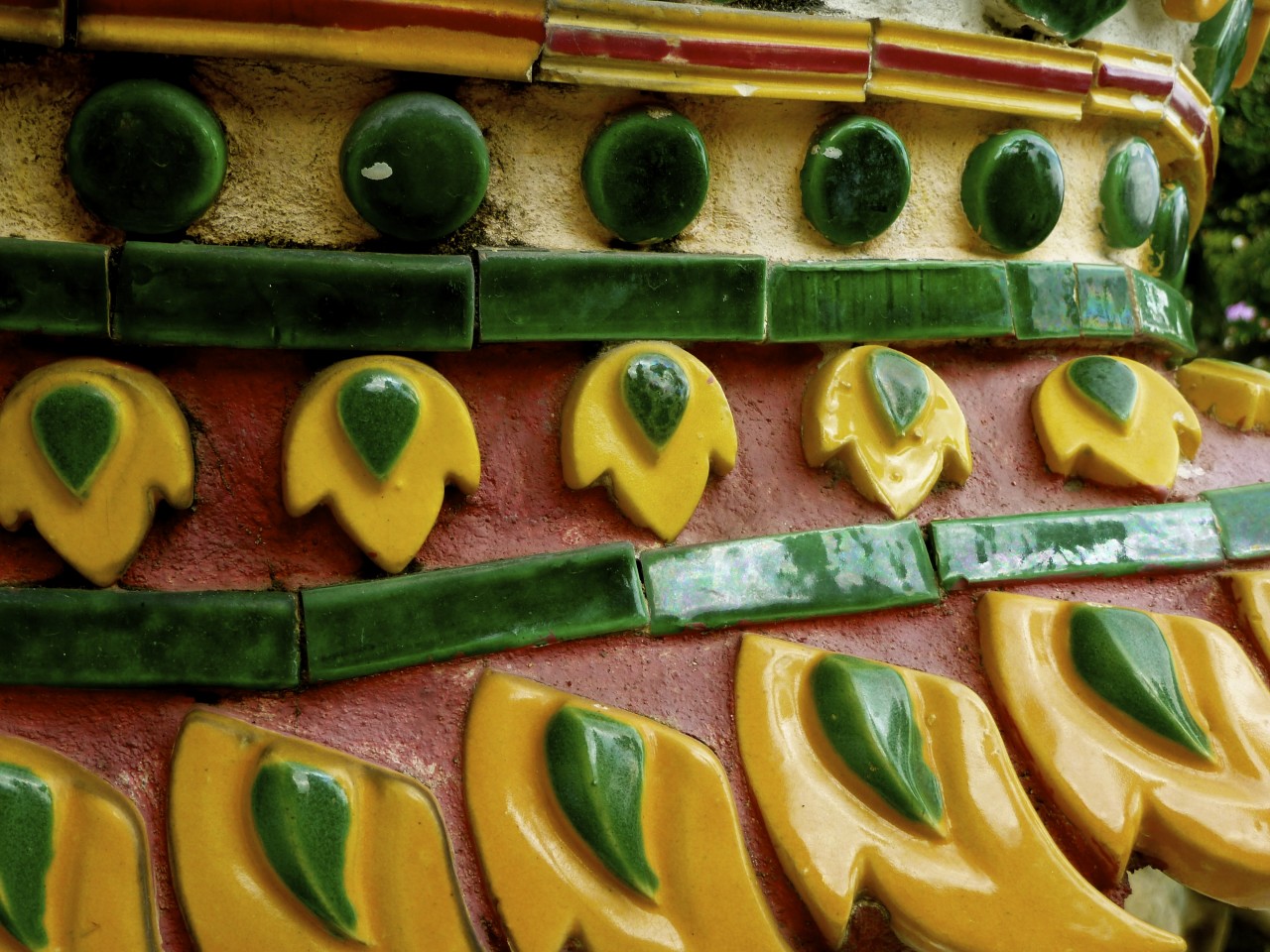 As a child, my parents collected porcelain from the 1800’s England, so I saw a lot of different styles of porcelain in my childhood home, but this is just as fascinating. The mosaic patterns and the fact that they are still quite intact are a wonder within themselves.

Wat Arun has a Khmer architectural design featuring a 230-foot prang tower in the middle with four smaller towers around it. You can climb the central tower – the steps are very steep, but there is a railing to balance yourself. Apparently, the stairs represent the challenge that Buddhists face reaching Nirvana in the Buddhist religion. From the top, you can get a great view of the Chao Phraya River and the Grand Palace.

Getting up there is as tricky as getting down! I went about halfway up and took some photos, here is a shot looking up those stairs. 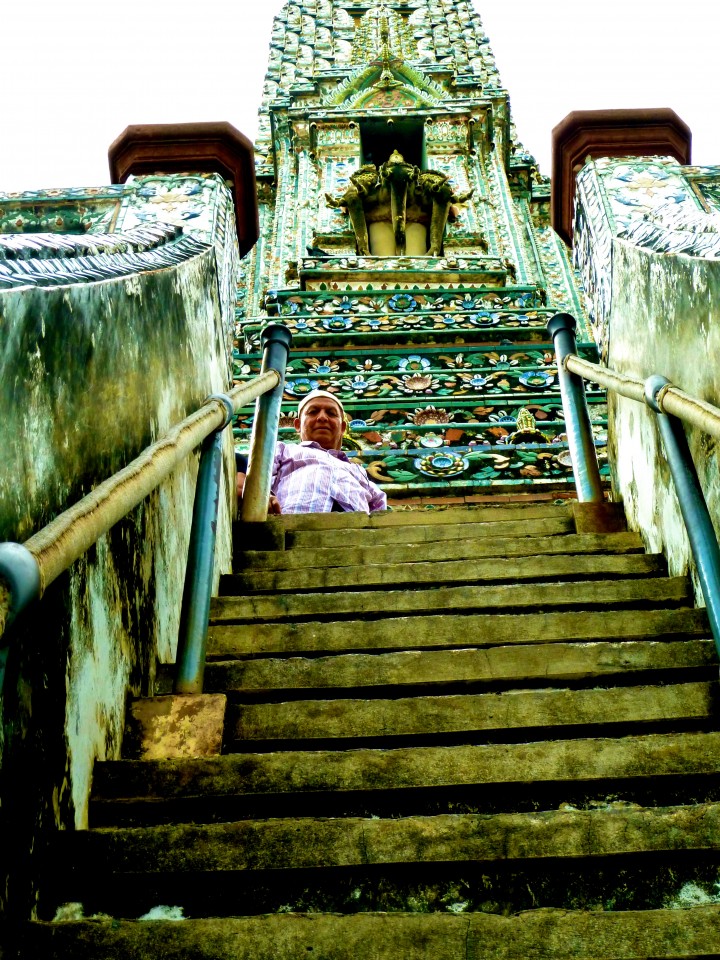 ✦ Four Levels of the Prang

There are four levels to the tower or prang. The first two are relatively easy to climb, which is about as far as I went. But the third and fourth levels are reached by steep steps that are almost at a 60 % gradient! No way could I climb those! You literally have to pull yourself up with help of the railings. They say it is definitely worth the effort, but for me, I will admire it from afar!

Guarding the temple against the ground level are these stone Chinese warriors.  These cute, proud, and stern-looking warriors have stood watch over Wat Arun for over many years. 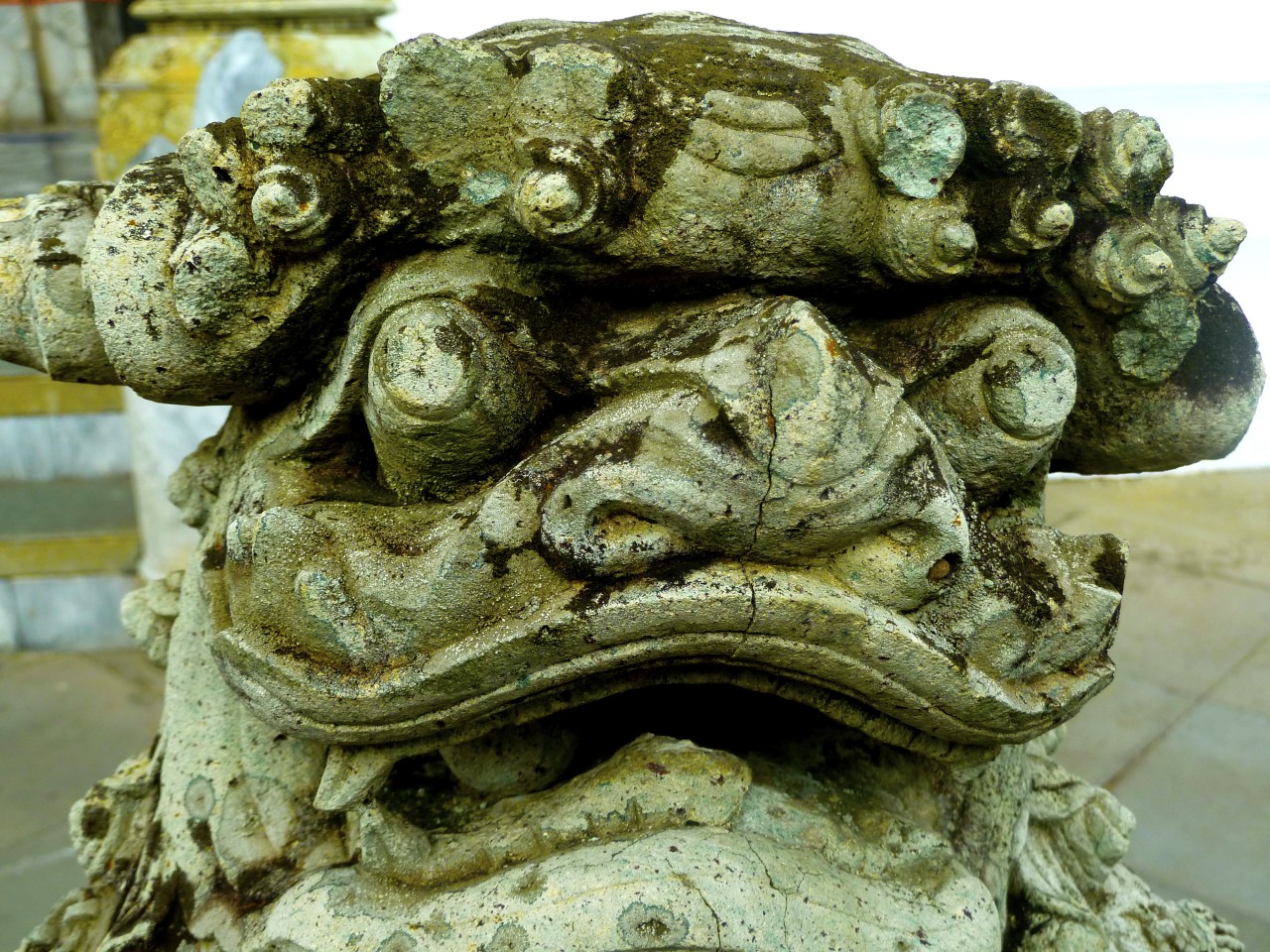 The full name of Wat Arun is “Wat Arun Ratchawararam” (which then translates to “temple of the dawn”) and the temple is also known locally as Wat Chaeng. This Thailand temple is named after the Indian God Aruna, who is the God of the dawn. The temple was built in 1768 under orders from King Taksin. It’s believed that the king arrived at the temple in 1768 after escaping siege from the Burmese, just as the dawn was breaking.

✦ Wat Arun was the Royal Chapel

For a while, the temple was the royal chapel and housed the Emerald Buddha before the Grand Palace was moved to the other side of the river. But it wasn’t until the reign of Rama II (1809-1824) that the current design of the temple would begin to take shape. The temple complex is built largely in the Khmer style as mentioned before, with influences from China and India incorporated into the designs. The temple has undergone major renovations and restorations over many years. 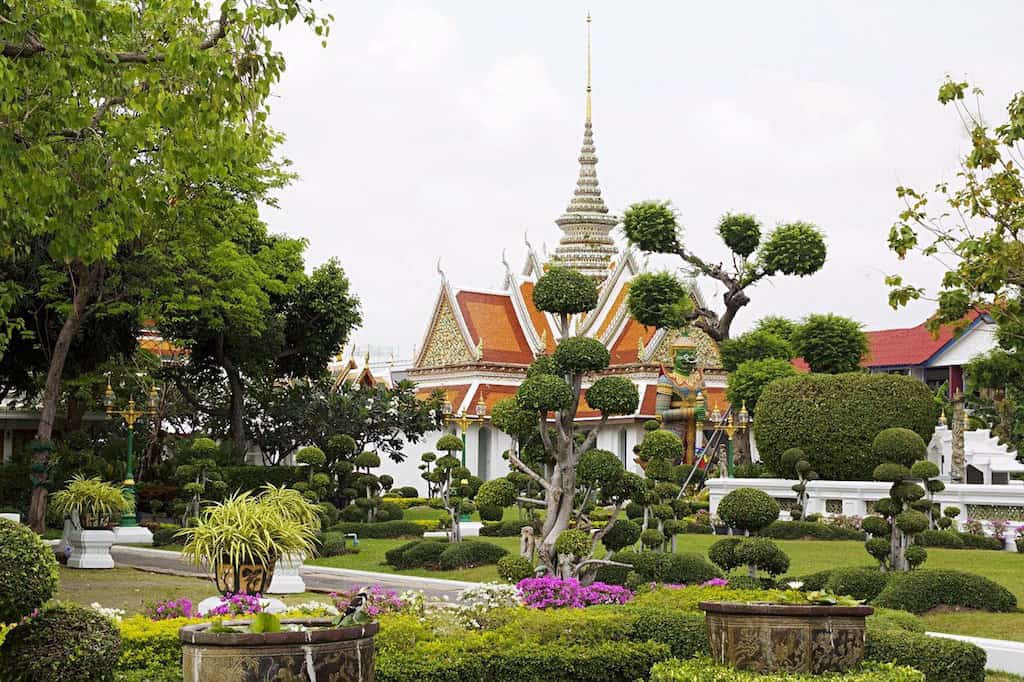 If you want to know more about the history of Wat Arun, you can always hire a guide to take you around the temple.

✦ Other Interesting Buildings on the Arun Wat Grounds

Although the Wat Arun is known for its impressive tall towers, there are other buildings that are worth investigating. 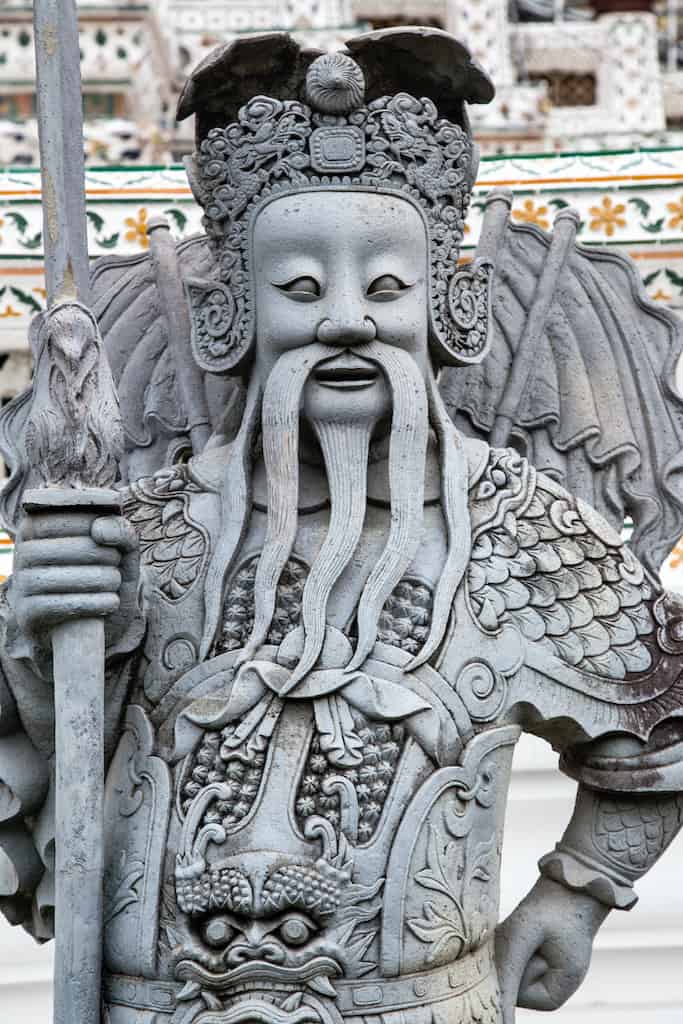 ✦ The Ubosot, also known as the Ordination Hall

The Ubosot is in an inner courtyard that has a two-tiered roof with shofars (a ram’s horn used in ancient times), door frames, and colorful porcelain walls. It houses the principal Buddha image of the Wat Arun. The base of the image is “subduing Mara mudra”. This mudra is only depicted on seated images with the legs crossed in the meditation position, the right hand over the knee pointing towards the earth. This image was designed by King Rama II, who was very interested in art and contains the ashes of the King himself.

There is a covered passageway known as “phra rabiengkote,” that lines the walls around the ubosot. This passageway is lined with 120 Buddha statues in the sitting position.  The remains of deceased individuals are kept in the cubicles below the statues, was what I was told!

The viharn or prayer hall is located next to the ubosot and is a very peaceful part of Wat Arun. Few visitors come here. But if you are looking for peace and quiet, then this is a part of the temple where you can really get it. The viharn is an impressive building, both inside and out. The mondop mentioned below and the viharn are near the kuti or monks’ quarters. All of this is away from the Chao Phraya River and the busy tourist spots.

Around the central tower or prang are four mondops that enshrine the Buddha images. A mondop is a style of traditional religious Thai architecture that features a square building with a pointed roof.  The Buddha image here represents the four important occurrences in the life of Buddha: birth, the first sermon in Sarnath to the five monks, enlightenment, and passing into final nirvana.

There is also a beautiful garden directly in front of the mondop donated by a temple well-wisher and his family.

✦ The Cloister and The Buddha Footprint

The main cloister of the temple Wat Arun complex contains more than 100 Buddha images. It also contains Buddha’s footprint. A flight of steps leads up to the chamber where a copy of Buddha’s footprint is carved in stone and decorated with porcelain.

Like all Thailand temples, respect should be shown when visiting. In particular: 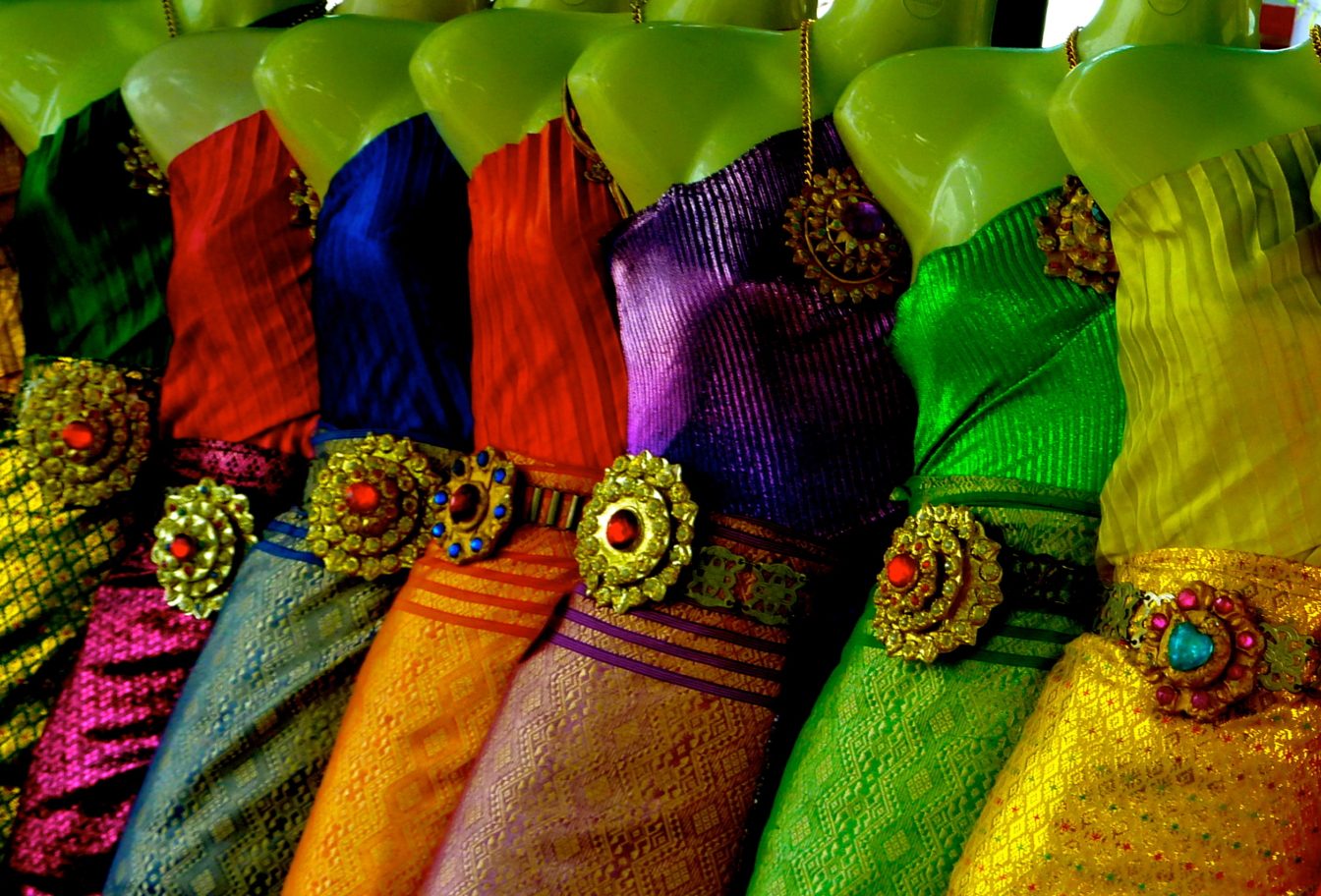 “Wat Arun represents Mount Meru, the center of the world according to Buddhist teachings.

Getting the best view of Wat Arun, the best view of Bangkok’s Temple of the Dawn is arguably not from inside the temple itself, but actually from across the Chao Phraya River on the east bank, at sunset. If you’re lucky, the sky will flush red, and the temple’s spires will create a striking silhouette with Wat Arun standing in the foreground. Once night falls, it is beautiful when lit up.

There are plenty of cafes such as the Arun residence which offer outdoor seating with river views so you can sit and have a drink and admire Arun Wat. You could also combine your visit with a look at the Reclining Buddha at Wat Pho across the river and have an early dinner at the nearby Home Café Tha Tien. 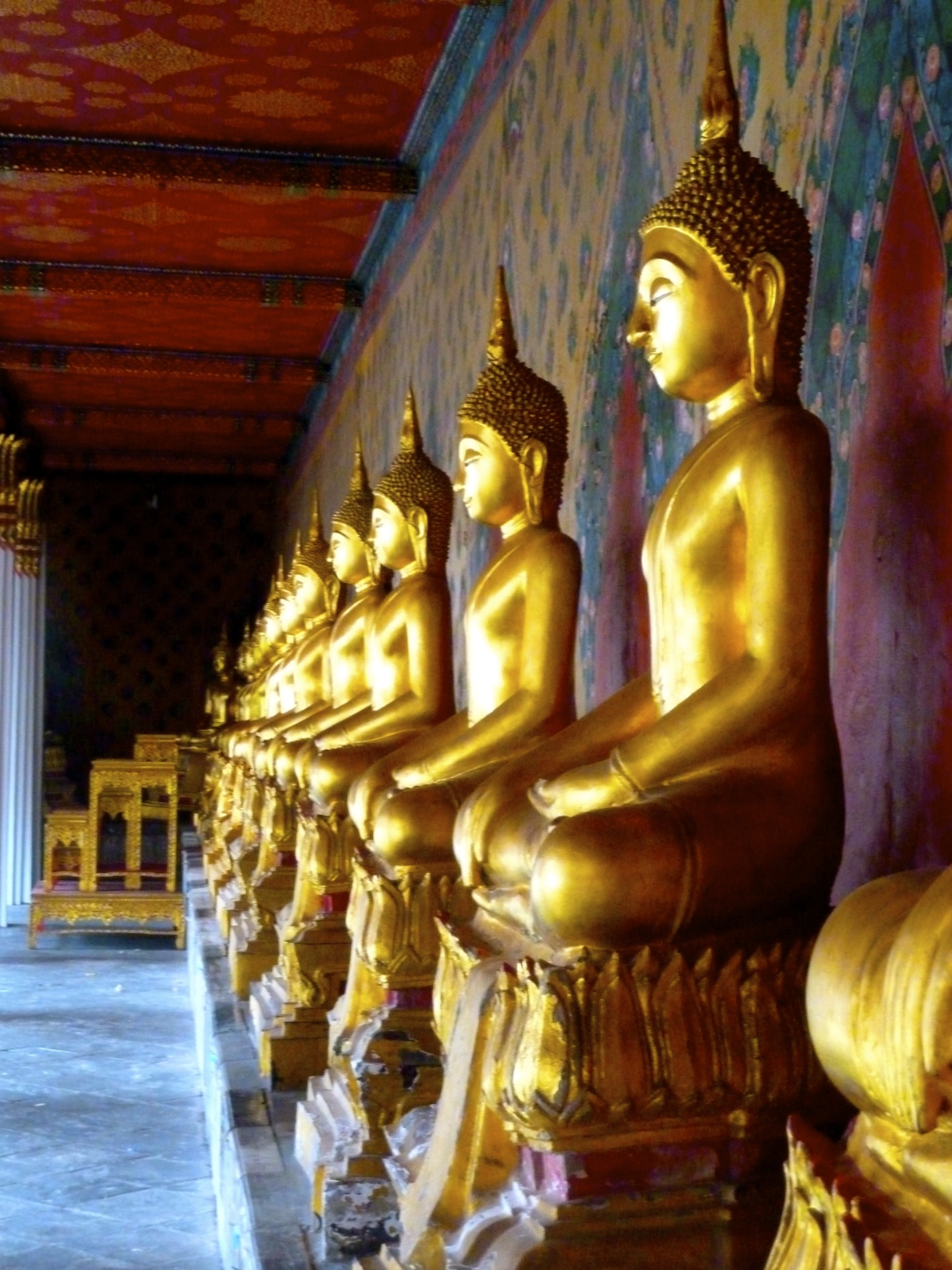 Disclosure:  As is common in the travel industry, PointsandTravel was provided with compensation for the purpose of review by Thai Airways, in conjunction with the Tourism Authority of Thailand. While it has not influenced her review, PointsandTravel.com believes in full disclosure of all potential conflicts of interest. 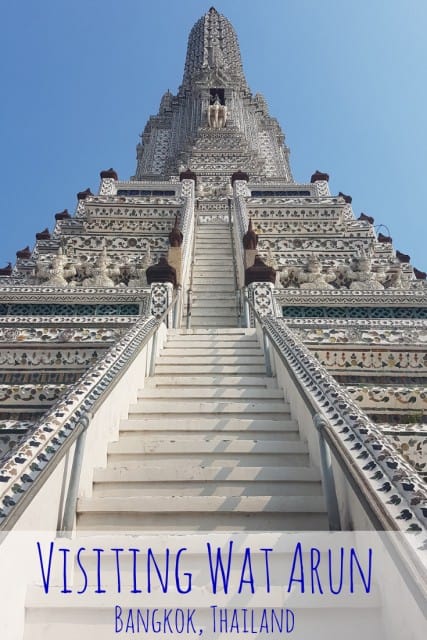 I just love the level of details in these temples. I can't image just how long and how many people it took to make it look so incredible.

Yes, they are amazing!