Chao Phraya River is one of the major rivers in Thailand, running thru Bangkok. It is known as the River of Kings, formed by four major tributaries including the Ping, the Wang, the Yom, and the Nan Rivers. Ultimately though, it flows into the Gulf of Thailand. This river is a very important waterway for the people of central Thailand, whose cities lie along the banks of this river. These cities are the most historically significant and densely populated settlements of Thailand due to their access to this waterway. Come along with me as I take a ride on a River Cruise Chao Phraya boat and explore this city on my Thailand Trip. 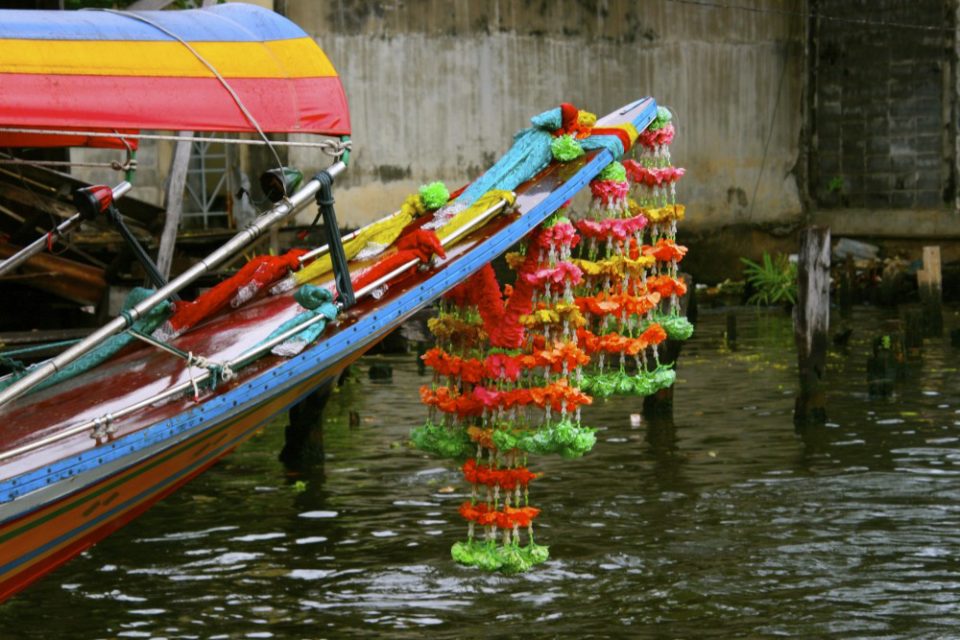 Long-tail boat along the banks of the Chao Phraya River, Bangkok

There are few places in the world that make it possible for visitors to see a city via a river cruise. Venice is one, Vancouver is another one. Even Hong Kong has a quick ride that allows riders to see the city skyline for a brief five minutes.

So is this what makes Bangkok so unique? Bangkok has a rich history with its four major tributaries. These canals are often referred to as the main artery of the nation. So, in case you want to go on a River Cruise Chao Phraya boat, here is a list of the boats/ferries for you to get around Bangkok. It lists the boats, the piers, and the stops you will need to get from place to place.

Keep in mind that the Central Pier is called Tha Sathorn and is located right next to Saphan Taksin BTS (the Skytrain) station. From Tha Sathorn, you can take boats going both North and South. All piers to the North are marked with an N, and all the piers to the South with an S, and then they have their pier numbers marked on them as well. Thankfully, all the piers are marked in both English and Thai language.

On my Thailand trip down the river, I was on my way to the Amita Thai Cooking Class, but half the adventure was getting there on this Chao Phraya river cruise. Another option for tourists is to go on a dinner cruise. Most river cruises on the Chao Phraya rive start between 5:30 and 6:00 pm and last for a few hours. I find seeing the city at night with all the lights and reflections on the water is a fun thing to do. Plus, you won’t have to get on and off the boat. One option could be the  Loy Nava Dinner Cruises.

There are four different express boats based on the color of the flag: no flag, orange, green, or yellow flag.  Most operate Monday through Friday, from 6 am to 10 pm, but the orange flag runs every day. Typically, you can buy your tickets at the pier or once you are on board.

You will also see many long-tail boats along the river. They take you anywhere you want to go, but do consider that they are quite a bit more expensive when compared to the express boats mentioned above.

As for Bangkok, truly the Chao Phraya River is the lifeblood of this massive city. With its juxtaposition of dimly painted wooden shacks, set up against temples and high-rise, metallic reflection buildings. It is a hodgepodge of modern yet traditional, of religion versus secular, of calm versus chaos. It is an assault on the visual senses.

Along the banks of the Chao Phraya River, Bangkok

As you travel down the Bangkok river, the four must-see attractions that are along the river are Wat  Arun (Temple of Dawn), Wat Pho (Temple of the Reclining Buddha), Wat Phra Kaew (Temple of the Emerald Buddha), and the Grand Palace. Keep in mind that these are tourist attractions and so most of those who visit here are visitors to the city.

At times I found life along the river unsavory, yet other times it was alluring as a photographer’s dream. These are the things that make the Chao Phraya River so evocative. It is here in the waterways of Chao Phraya that I got my first introduction to the magnificent city that my friend loves and has been talking about for years. He is always waiting for me to visit. His love affair with Thailand is well documented on his social media, so finally I have arrived to see his beloved Thailand. 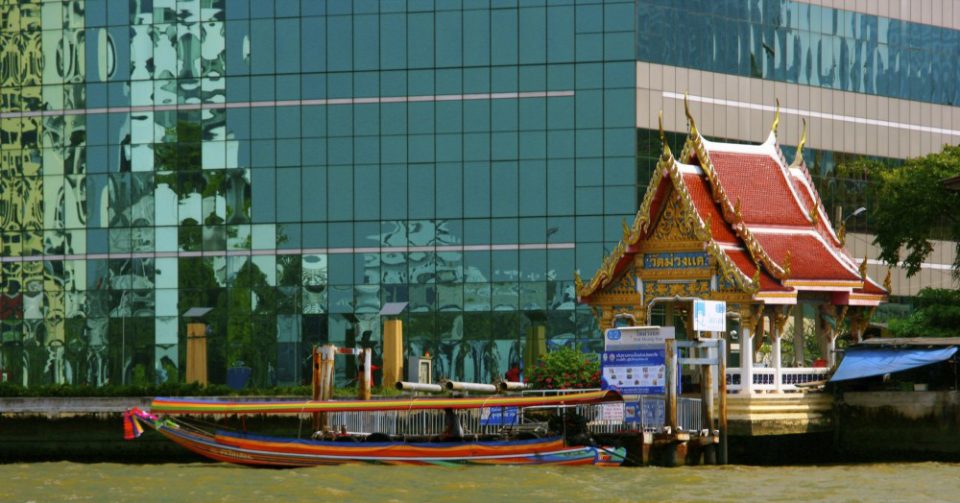 Along the banks of the Chao Phraya River, Bangkok

Along the banks of the Chao Phraya River in Bangkok, I find it so astonishing that many people call it home. Others use it as a source of transportation, while for many it is just a way of life and their main source of income. It is no wonder that Thailand is known as the “Venice of the East“, with its amazing waterways. 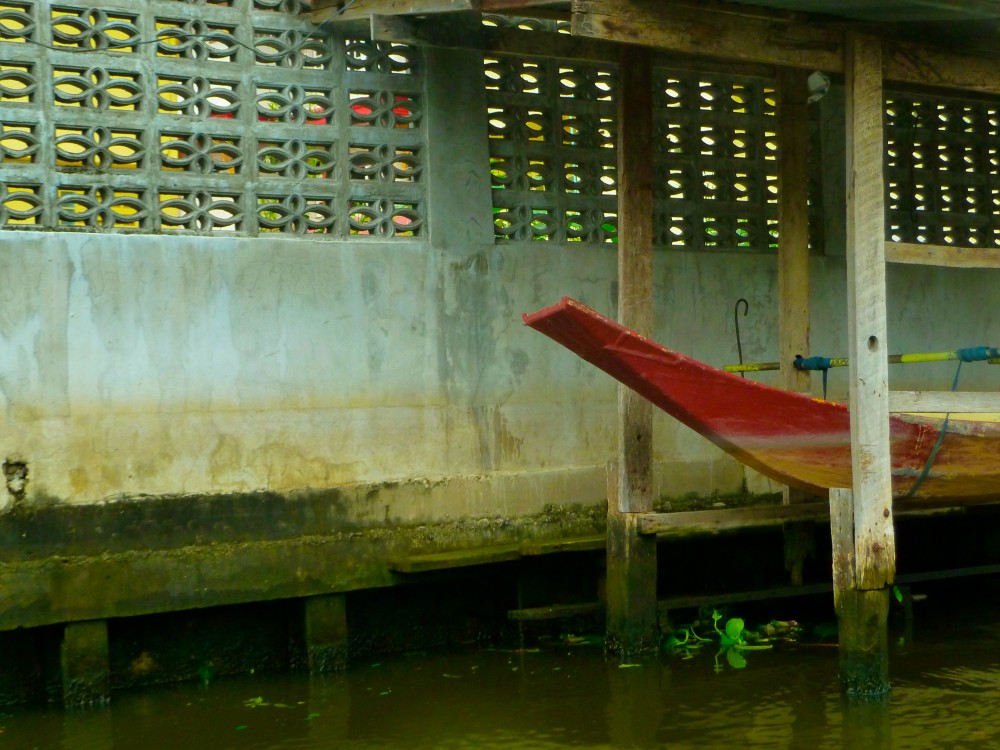 Riding boats that are powered by a noisy motor, we sputter past monasteries, temples, and ramshackled huts on stilts over pea-green then coffee-colored waterways, where there are Asian-hatted fisherman along the shores. With each glide of the decorated, colorful boats (called “klongs”), we go deeper into its grips. The waterways get narrower and narrower as we make our way pass rickety housing and orange-robed monks. 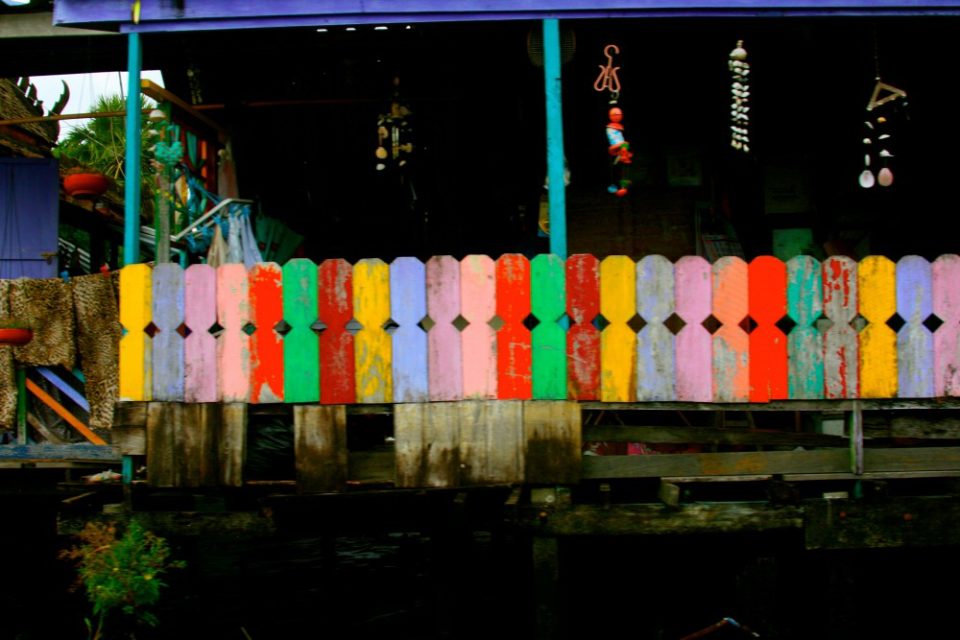 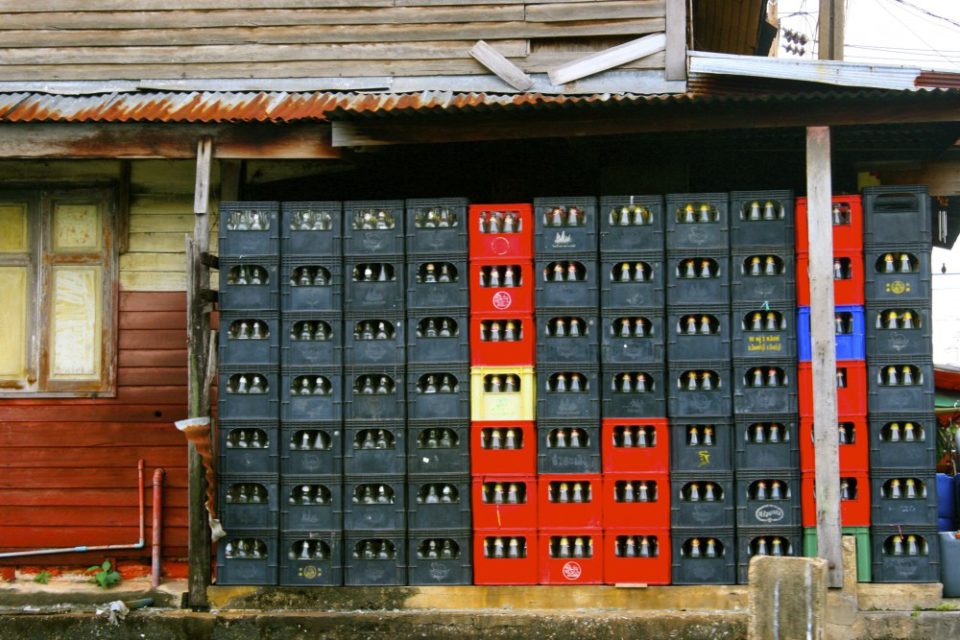 My eyes wide, not quite sure which side of the boat I should sit, as the photo opportunities were immense. It takes me a while to get into the rhythm of the visual stimulation coming at me. I see reflections of colorful tin buildings in the water, not knowing whether to take the photo of the reflection or the actual shack as it waves at me in the water. 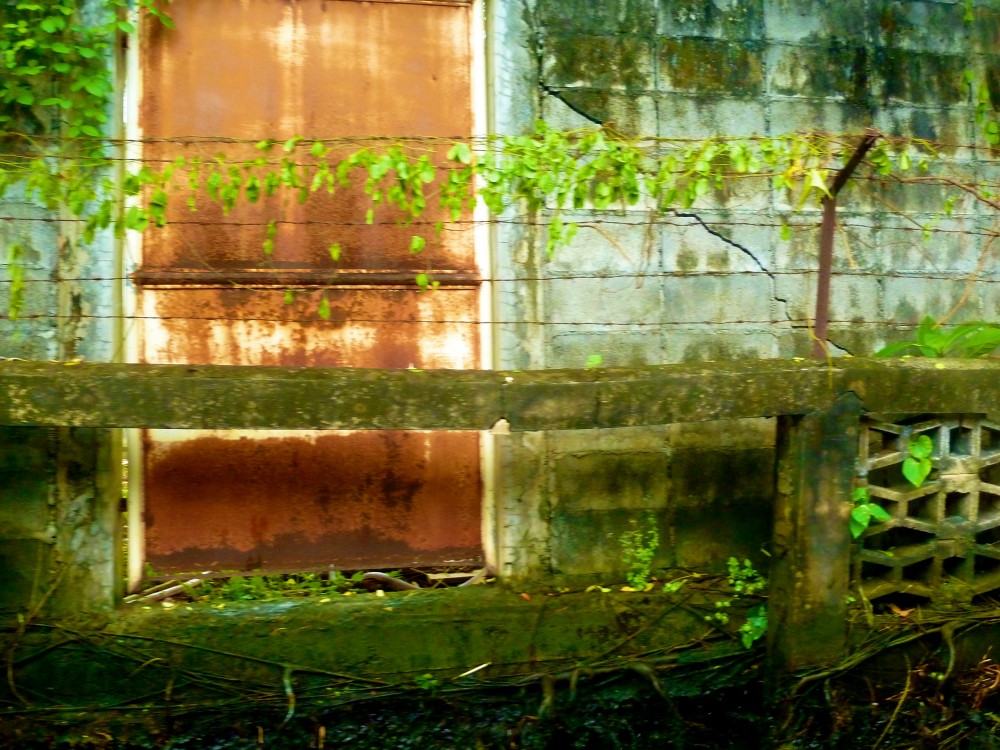 Reflections along the banks of the Chao Phraya River, Bangkok, Thailand 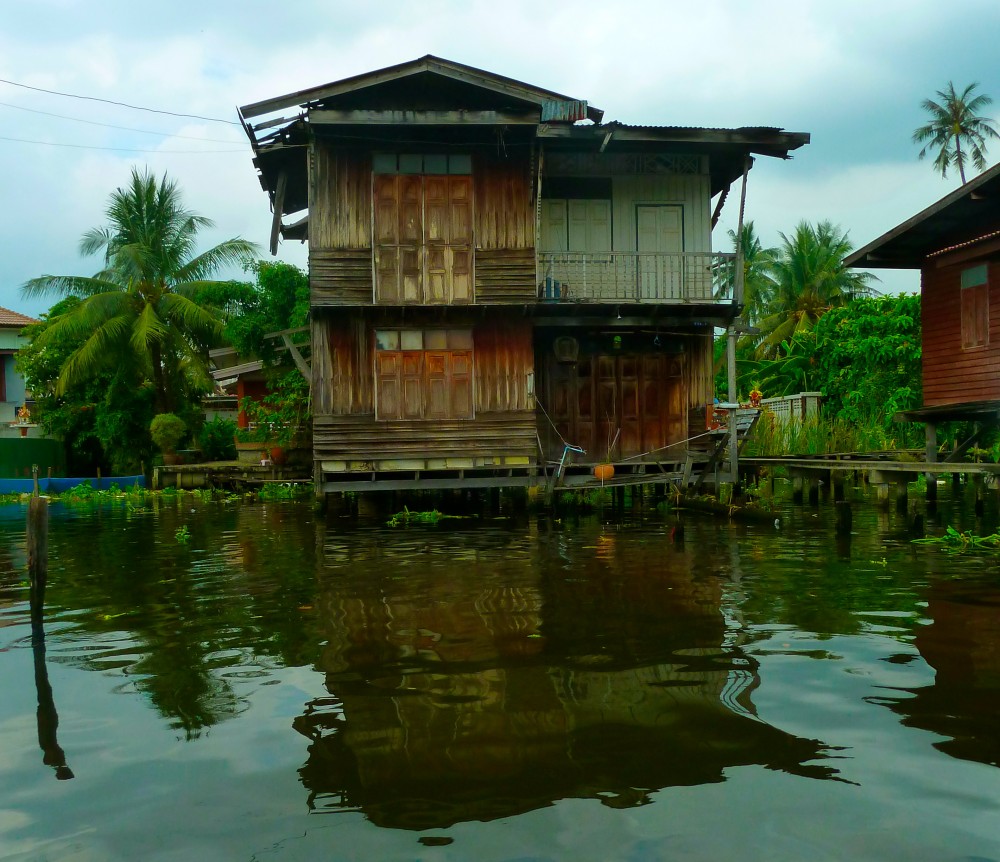 Reflections along the banks of the Chao Phraya River, Bangkok, Thailand

I would have liked to better understand these river people and their homes and culture that I saw on the river that day… a naked, squatting man, large lizards, laundry washers, workers, fire pits, colorful laundry hanging in the wind, trash, a satellite dish, orange latex gloves on stilts and lounging hammocks beside blue stepstools. Everything here in Bangkok on the river is so random. 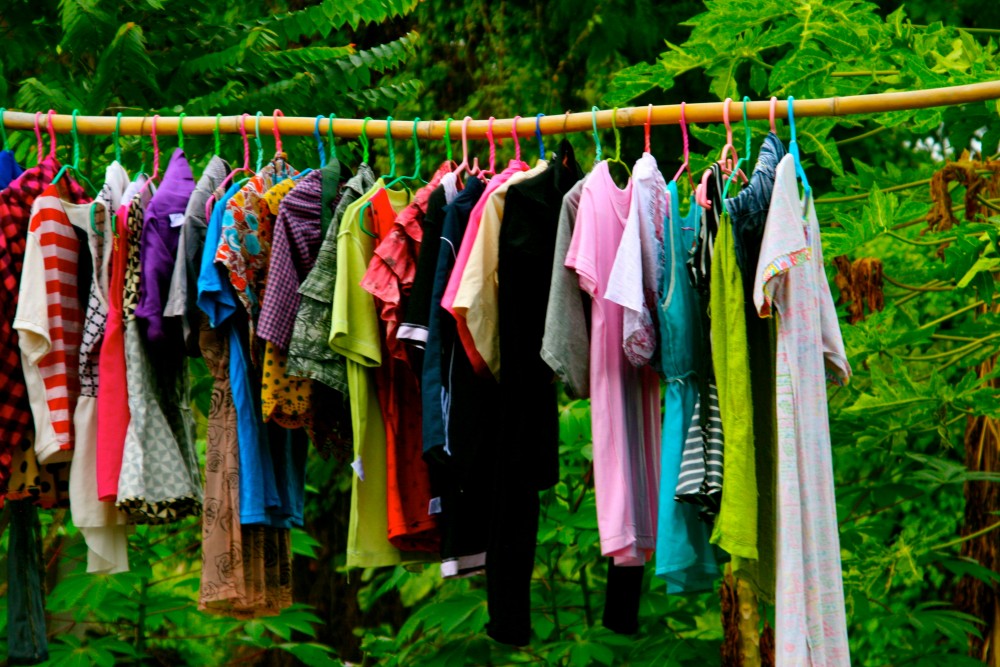 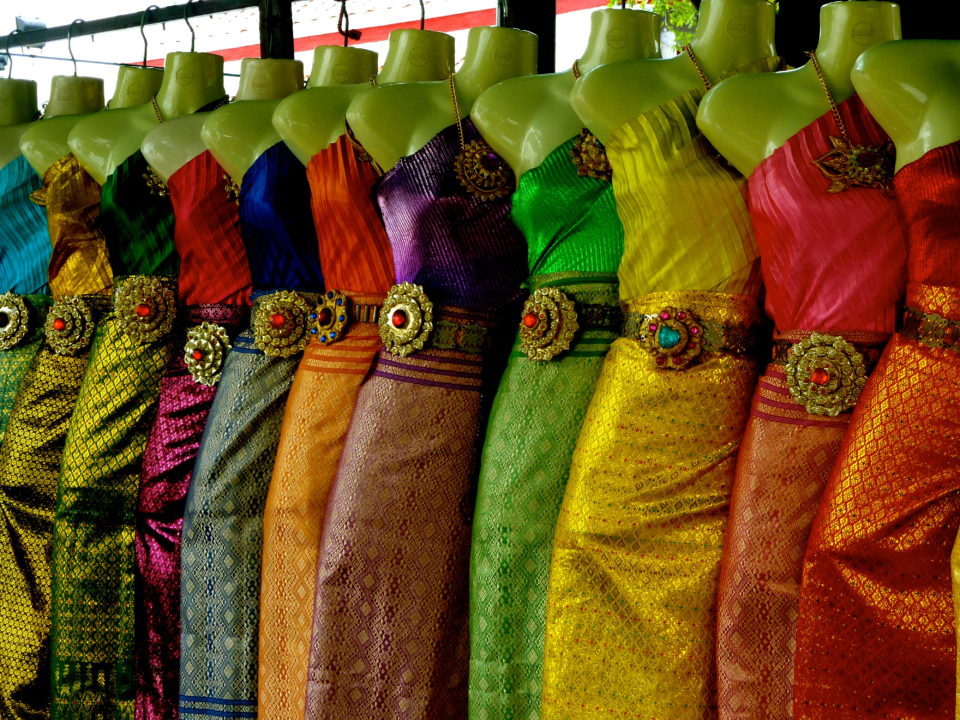 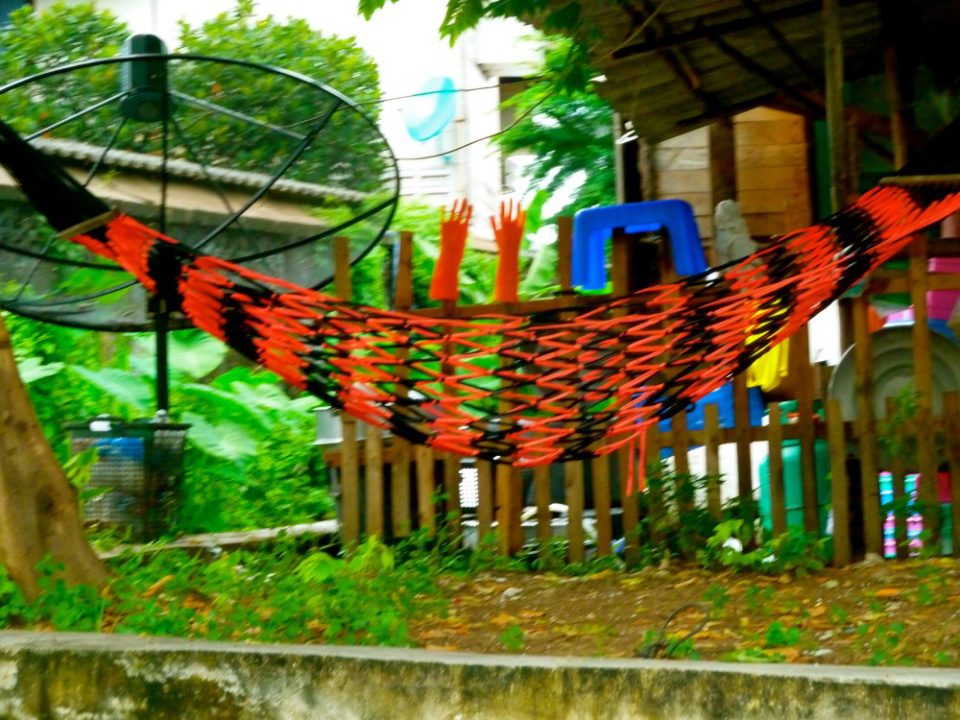 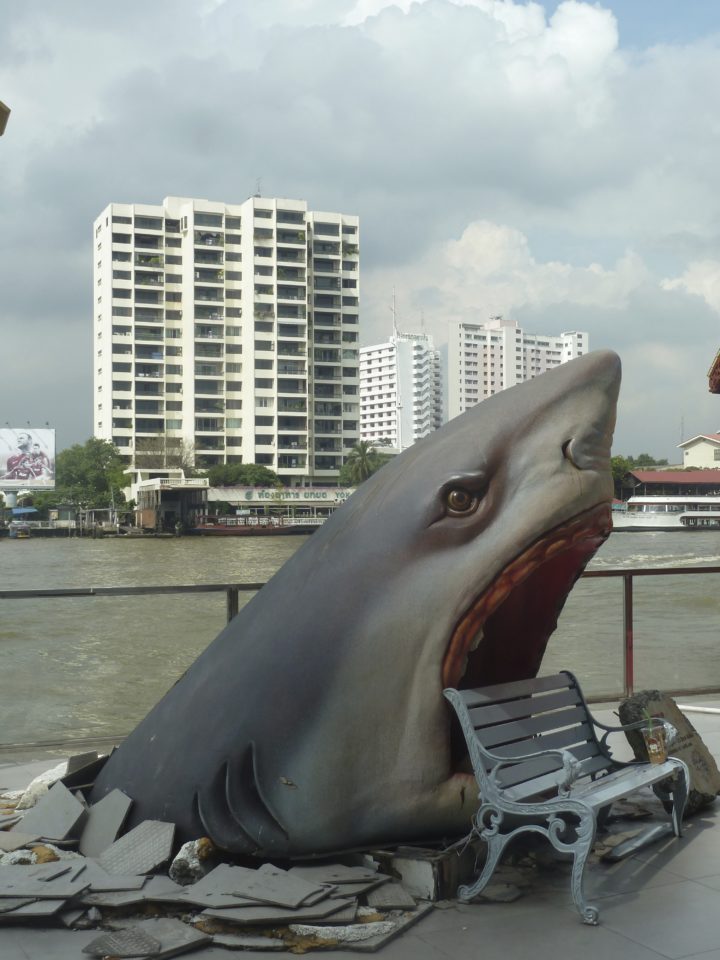 I was surprised at the smiling faces staring back at me, the early morning coffee they were having on their balconies while facing the river. It is only moments that I see their faces and then our river cruises passes them and we are gone in seconds. Moments of two cultures clashing against each other.  Them seeing me and me seeing them in seconds from the boat, each staring one at the other. The ride provides glimpses into each other’s lives. 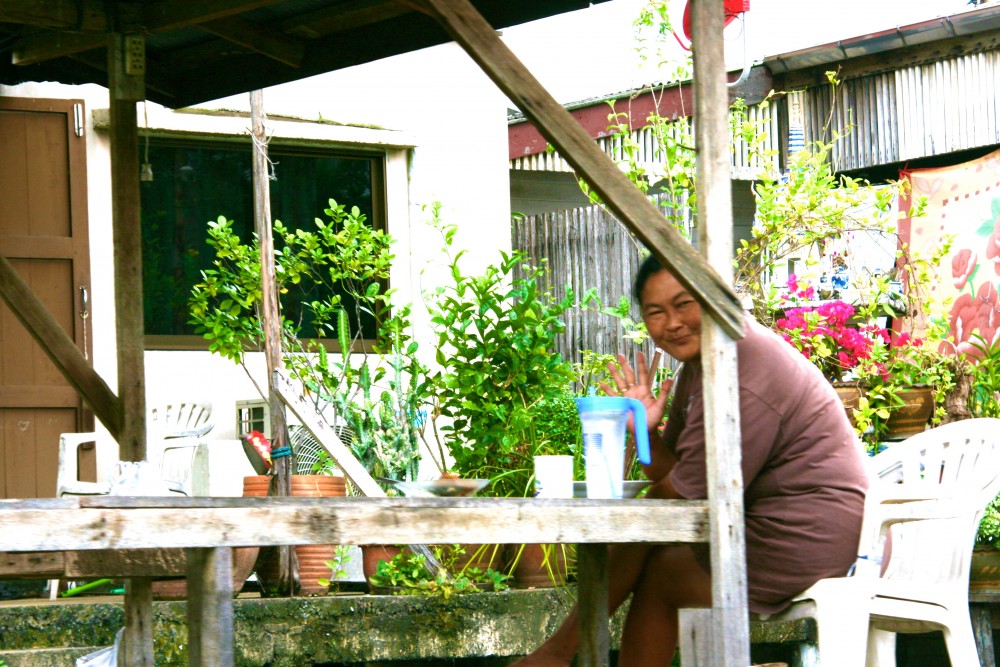 Along the banks of the Chao Phraya River, Bangkok, 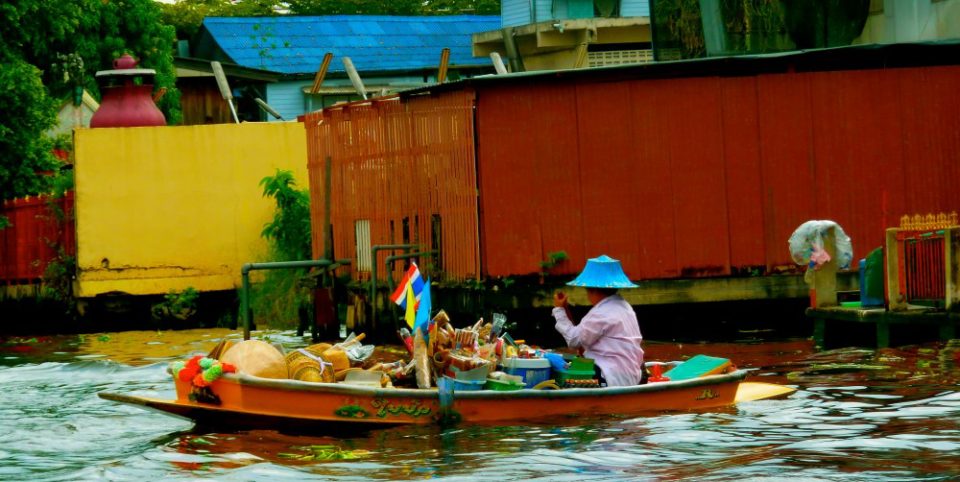 Soon we come across a schoolyard of children who are putting celebration lanterns into the water. 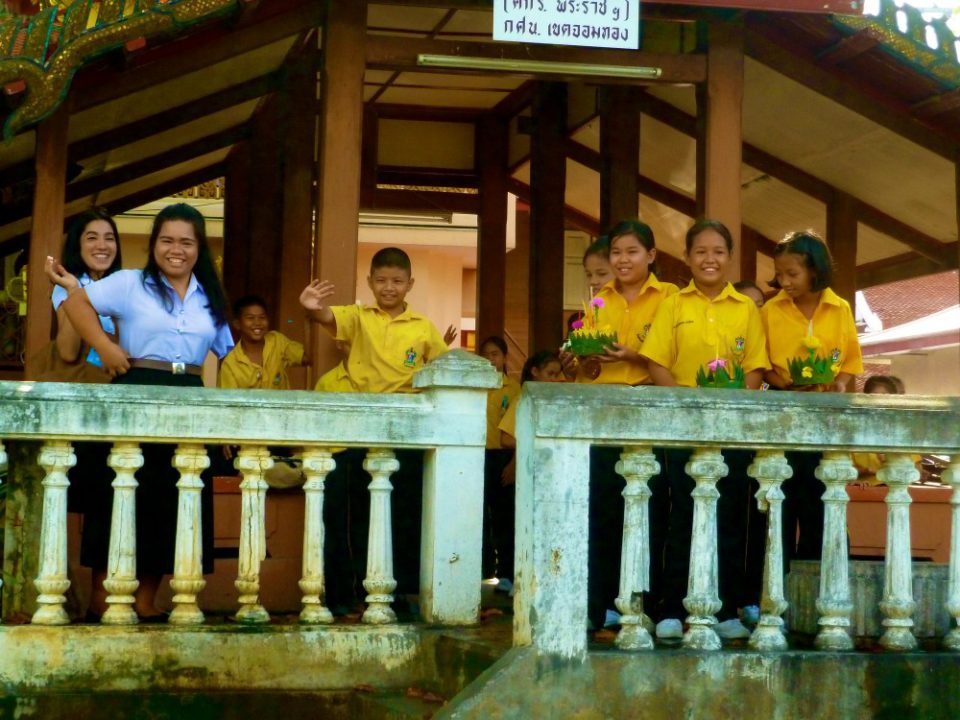 Along the banks of a Bangkok river cruise

At first, they seem to shy away from the cameras, as we are like paparazzi tourists flashing by, but soon enough, Sammie, our local guide begins to sing a Thai song really loud that draws them in and they begin to sing and to launch their lanterns into the waterways. Everyone seems to know this traditional Thai song and the children sing along. Then the long-tail boat driver puts the boat into reverse so that for more than a few seconds we can experience the children of Thailand and see them, one by one, launch their dreams. 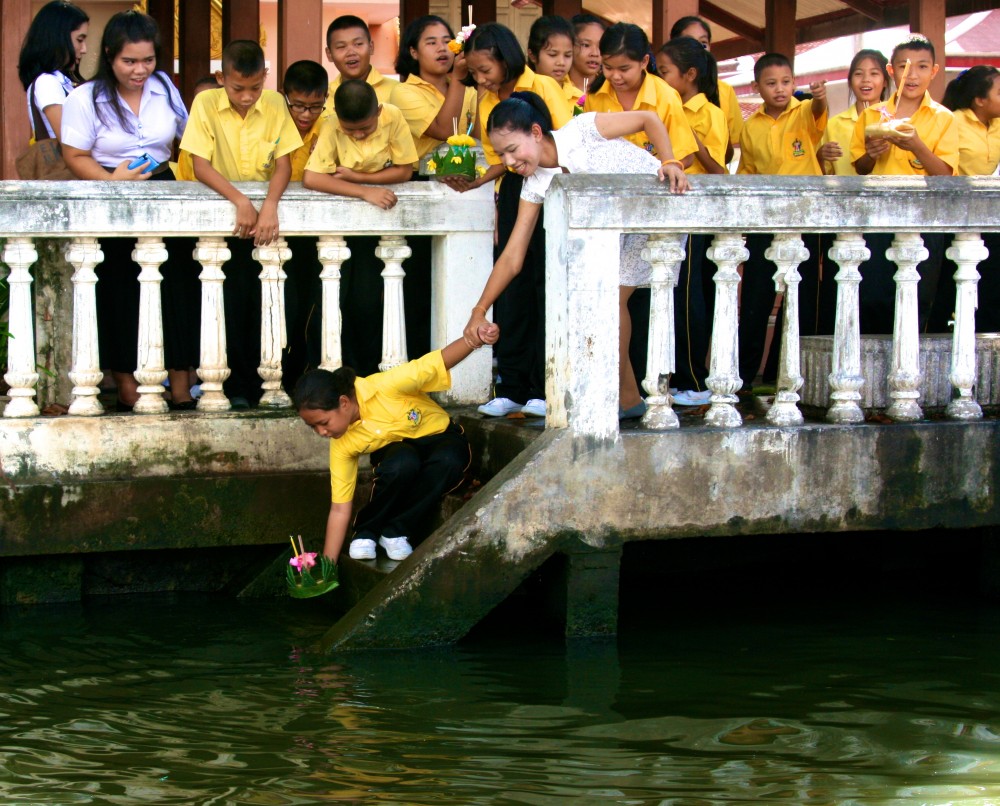 The lanterns are made from banana leaves, lotus flowers, candles, and incense. These floating rafts (the literal translation of Loy Krathong) are sent flaming down Bangkok’s waterways, carrying away the owner’s bad luck, ensuring a fresh start and the beginning of a new dream.  As they drop them in the water, secretly I make a wish, that I will come to understand them, their culture, and the people of Thailand, before I leave. As I find it fascinating from a Western point of view. In Thailand, what you see is what you get. Organized chaos for a Westerner, yet the native Thailanders all seem at ease and know what is going on.

Disclosure:  My trip to Bangkok, Thailand was provided by Thai Airways, in conjunction with the Tourism Authority of Thailand.

Why thank you print journalist! ha! That means a lot coming from someone so well-respected in the journalist community as you. A good time was had by all!

Thank you Cindy, you are so kind.

I like the photo with the fake shark ... so universal studios-like! :)

For some reason, everyone like that photo! ha! Kalboz, you were my inspiration to go to Thailand, as I know you love it so much!

Where is the photo of the man under the bridge? Mike

ha! I think I will leave that one out!

There is no better introduction to Bangkok than a longtail boat ride along the Chao Phraya River and its web of canals. Noisy, smelly, colorful, wonderful. It's an absolute must!

Absolutely! I did it on my first day there and loved every minute of it!

Love the shark popping out of the sidewalk.. that definitely was unexpected!