Home » Destinations » The Best Egypt Landmarks of All Time

The Arab Republic of Egypt is one of the largely populated countries in North Africa. More than 100 million people live in this historical country. According to historians, the earliest inhabitants of Egypt were from 3200 BC. The first official pharaoh of Egypt was King Menes, who ruled for 60 years starting in 3150 BC. Ancient Egyptians were highly successful and intelligent people who used scripts called “hieratic” for daily writing. They used a 365-day calendar, were the first people to sew wounds, and built the most magnificent landmarks in the world. As we review Egypt landmarks such as the Sphinx, Catacombs, and Temples, it’s important to remember that each landmark was built in different time periods. 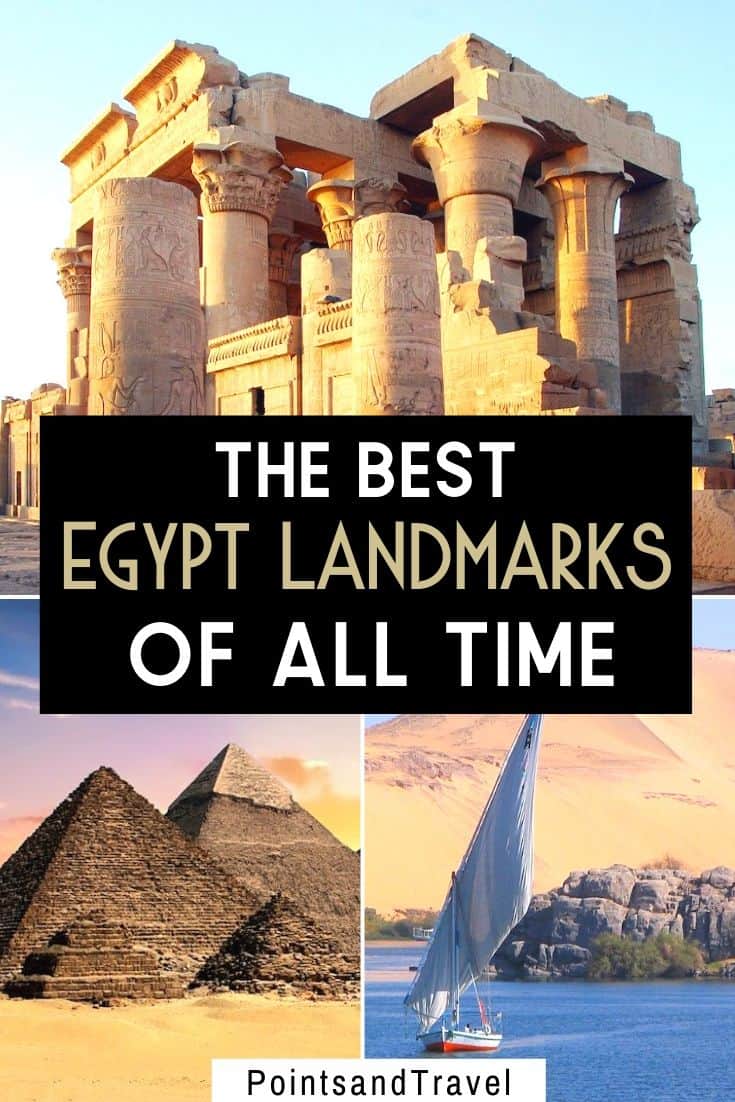 Historians have categorized the Egyptian civilization into four periods: Old, Middle, New, and Late Kingdoms and then subcategorized into smaller periods. Now let’s jump into the landmarks of the Old Kingdom first and then work our way up to today’s world. 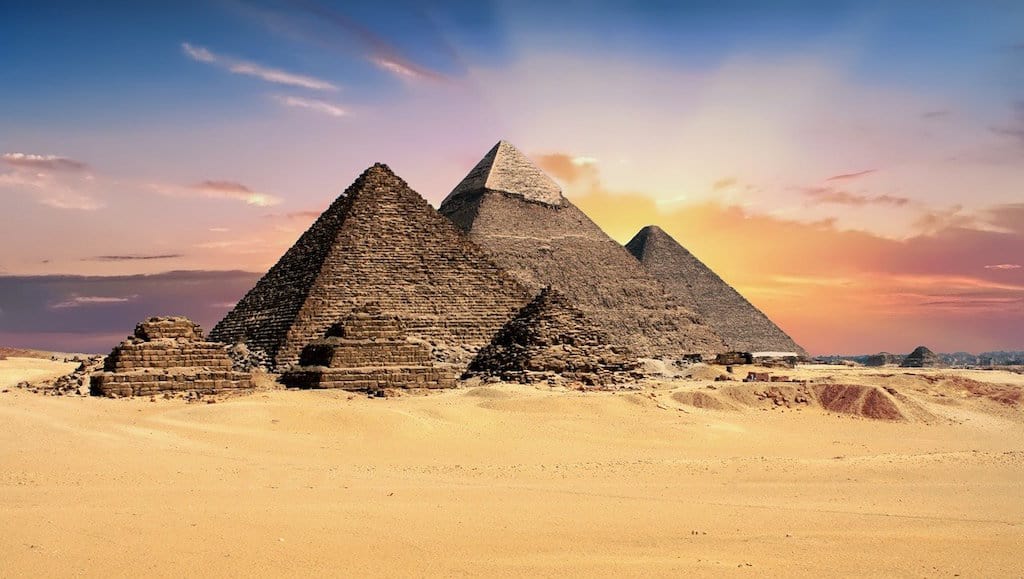 The Pyramids of Giza are one of the seven ancient wonders of the world. These grandiose pyramids were constructed between 2580 and 2504 BC. There is a total of 6 pyramids of Giza, 3 large ones, and 3 smaller ones. The oldest and largest of the pyramids is Khufu’s pyramid and it stands tall at 481 feet and took over 30 years to build. The pyramids were originally built for the intention of a majestic mausoleum for present and future Kings, along with a place to store their gold. 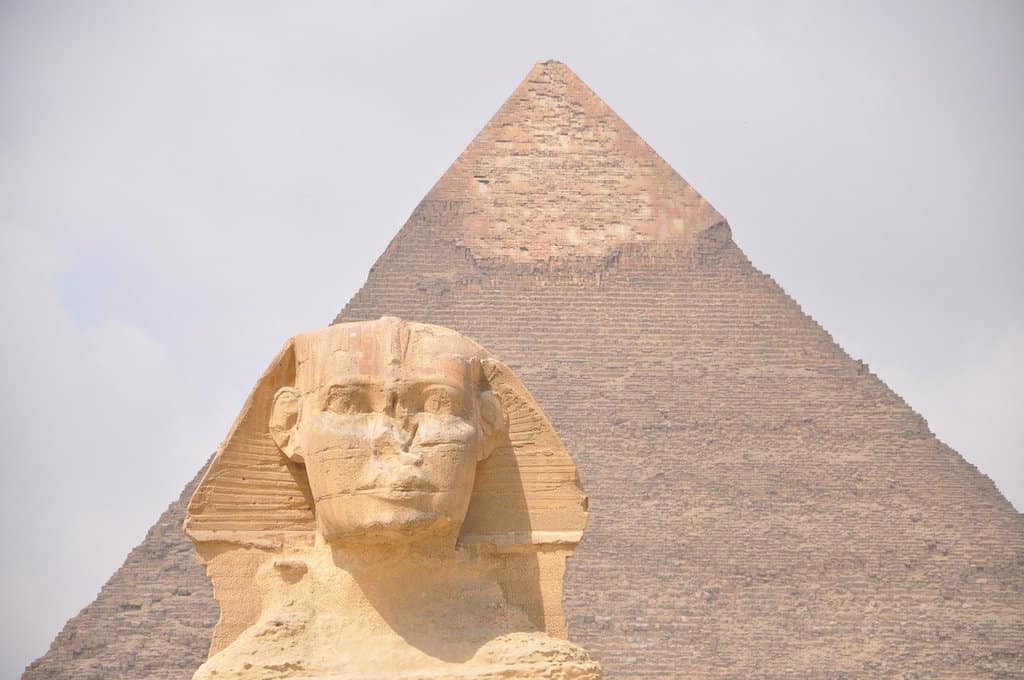 The site in which the Pyramids of Giza and the Sphinx are found is called Giza Necropolis. The sphinx was an important mythical creature that was cherished in Egyptian and Greek architecture. This Egyptian landmark was built during the reign of Khafra and stands at 240 feet high. Historians believe that one huge piece of limestone was used to create the Sphinx in its entirety. The Sphinx was covered in sand for hundreds of years and was rediscovered in 1905 but with not one inscription on it. As many have noticed, the Sphinx is missing a nose but also parts of its beard. 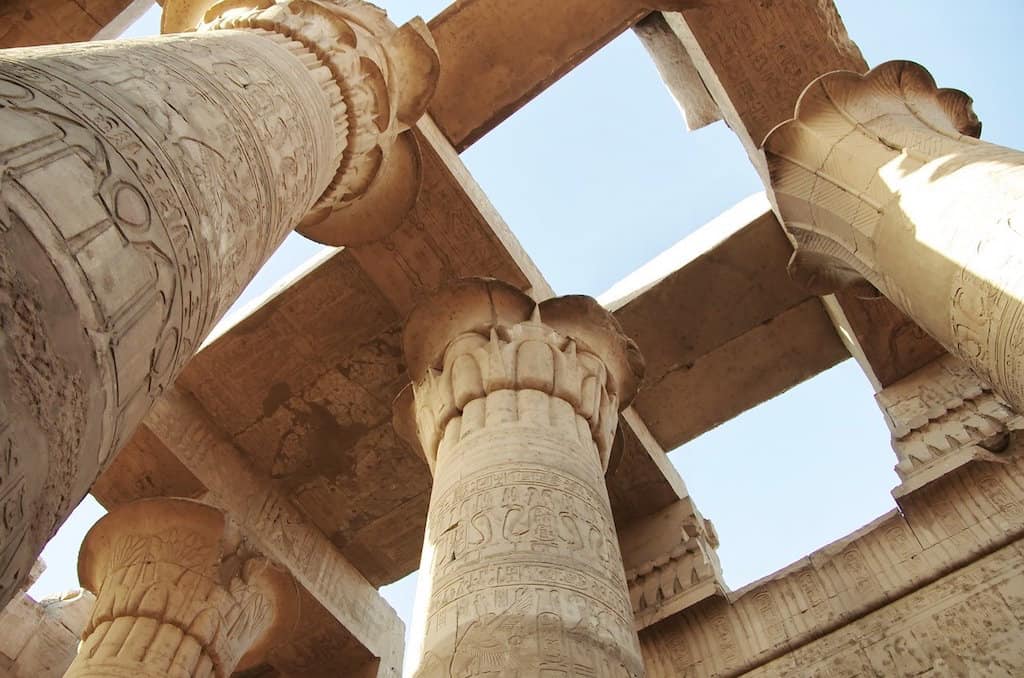 The exact time in which this ancient “holy city” was built is a little shady, but most historians believe it was in 2000 B.C during the reign of Senusret I. This site was considered most sacred to the Egyptian population because they believed that the god, Amun-Ra, interreacted with people during his time on earth. This is the largest outdoors holy structure with the Great Hypostyle Hall measuring at 54,000 square feet. Many pharaohs have added to the Karnak Temple during their reigns, such as Seti I, who built the Hypostyle Hall and Ramesses II who added columns to the site. 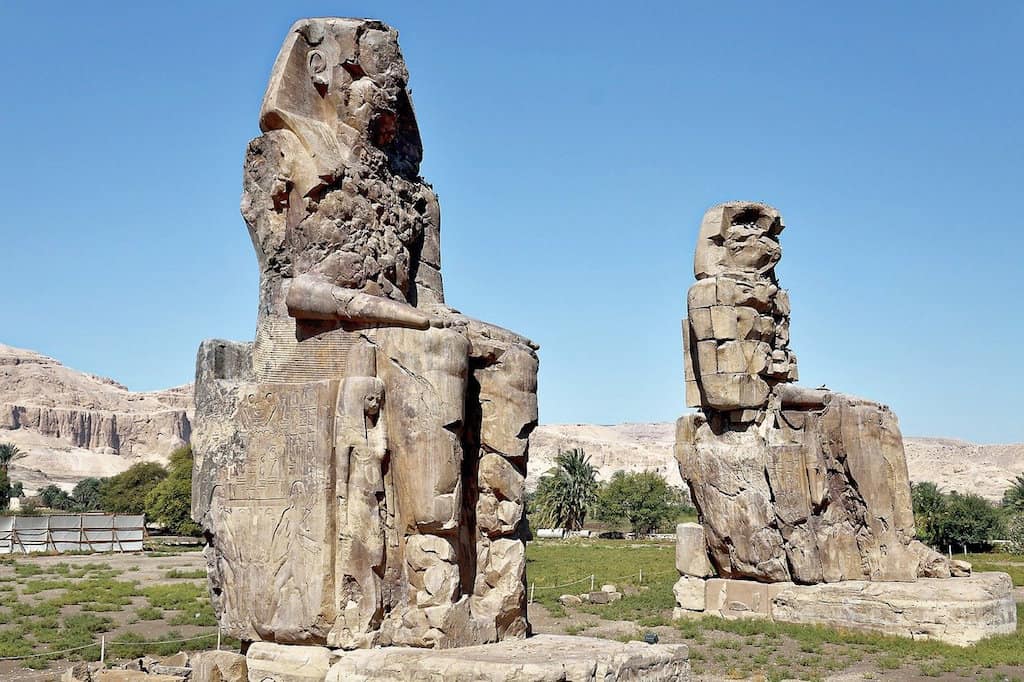 The depiction of Pharaoh Amenhotep III was built into two stone statues along with smaller statues of his family members, which are known as the Colossi of Memnon. He reigned from 1386 to 1353 BC. The twin stone of this Pharaoh statues was formed from one block of sandstone and is 60 feet high. The statues show the Pharaoh sitting on a throne and dressed in royal attire with mini-figures of his wife, children, and mother. Legend has it that the giant statues used to “sing” at dawn due to the oracular power, but this noise went away in 199 AD.

Like many pharaohs before her, King Hatshepsut wanted a monumental project to represents her dynasty and time on the throne. In 1479 BC, she commissioned the Temple of Hatshepsut by using the rock from the temple and tomb of Deir el-Bahri. This temple is directly opposite of Luxor, Egypt and is a shrine to the pharaoh’s life, with three stunning levels. The interior of the temple houses paintings, statues, a courtyard, sphinxes, and a tomb.

#3 Valley of the Kings

The Valley of Kings became a famous royal burial site during 1539-1075 BC. There are at least 64 tombs of ancient royalty buried in the Valley of the Kings including Seti I and Tutankhamun Burial sites for each pharaoh, It includes clothing, furniture, gold, jewelry, food, and drink. 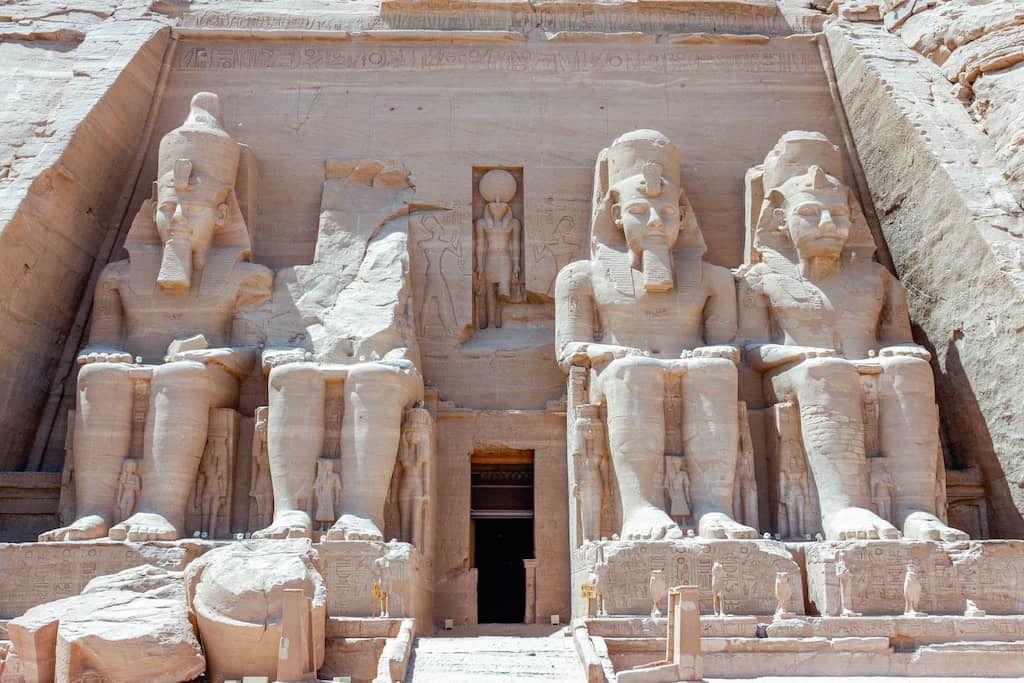 Ordered under the rule of King Ramses II, these temples were built in 1200 BC. The two temples were created for King Ramses II and one of his several wives, Queen Nefertari. More than one thousand years of statues, paintings, pillars, and artwork surround this stunning Egypt landmark.

If you haven’t already guessed, the Egyptians love their memorial temples. The Temple of Medinet Habu is one of the largest in Egypt and was built to honor King Ramses III. The temple has wall depictions of sacrifice and war-like personas. The main attraction is the temple of Ramses III but there are other structures such as a large court, watch-towers, apartments, pillars, and tombs. 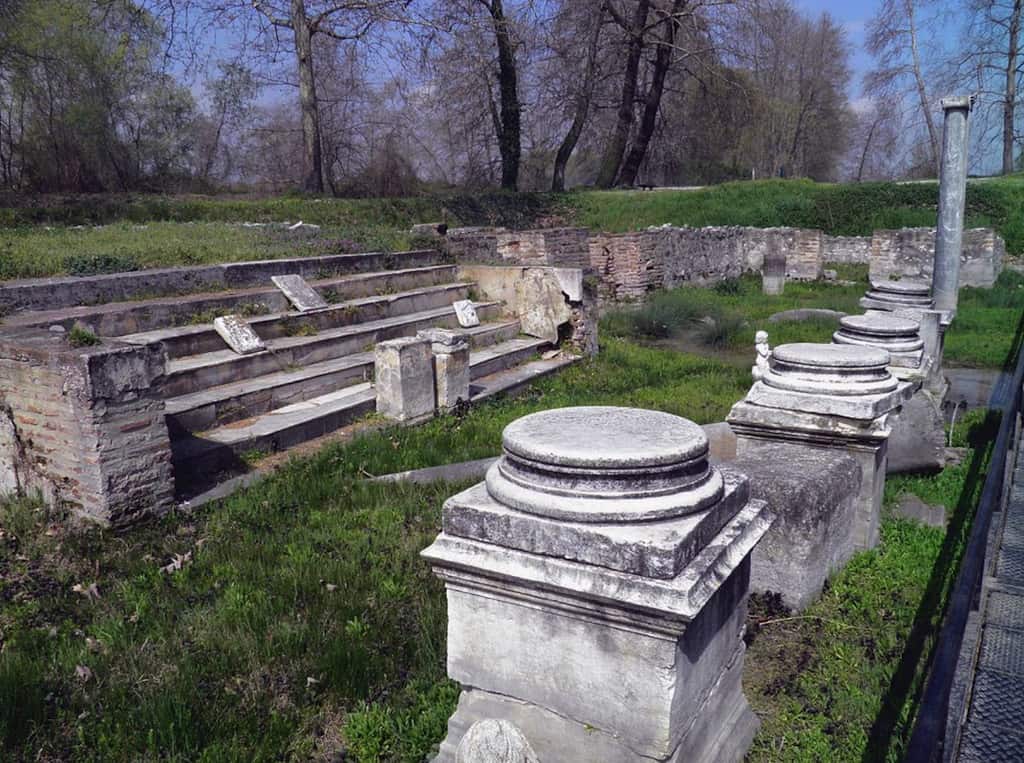 In 690 BC, the Goddess Isis was honored with a sanctuary as a “thanks” for her protection of children, pharaohs, and the dead. Isis was the ruler of fertility, magic, and love with a primary role of goddess of childbirth and motherhood. Not only does this temple honor Isis, but also her family. The central court, known as the birth house, is dedicated to Isis’ son Horus and in the inner sanctuary lies a gold statue of Isis.

#2 Temple of Horus in Edfu 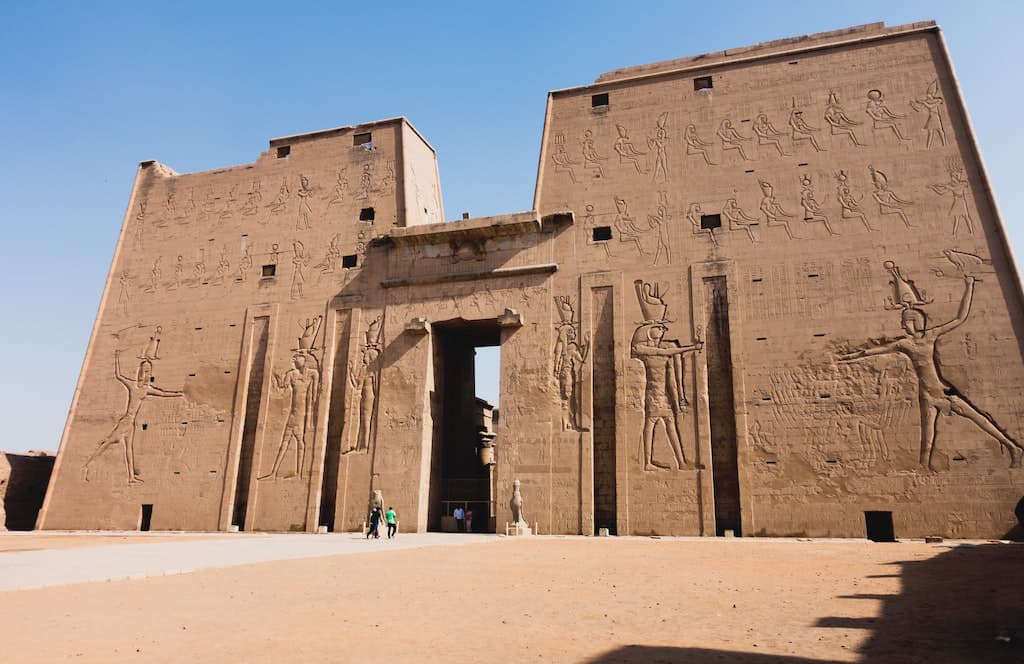 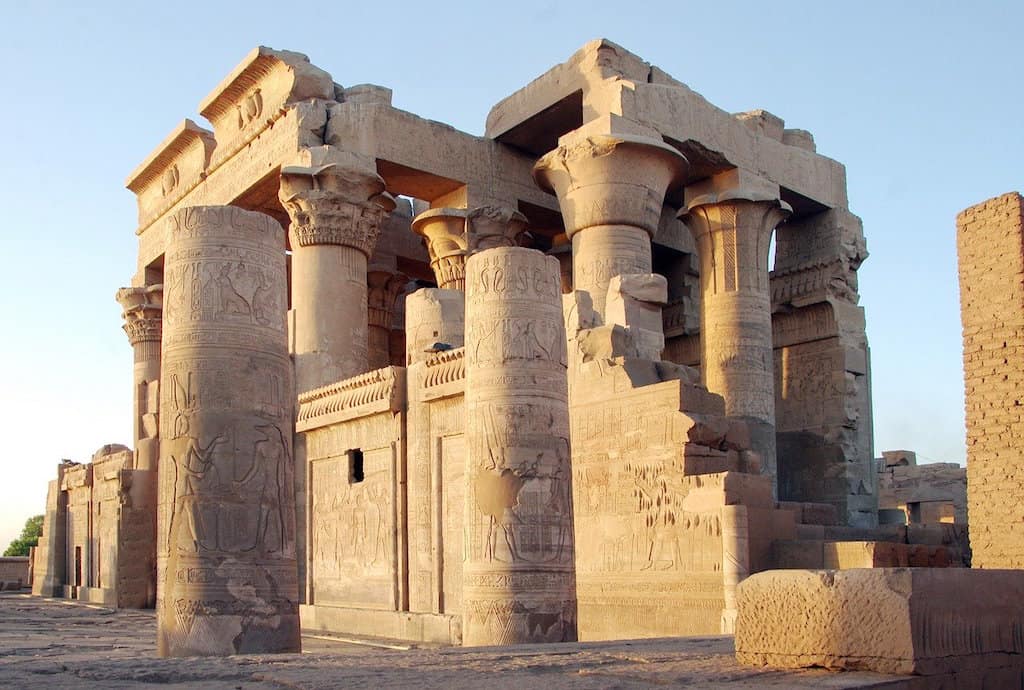 This temple overlooks the city of Kom Ombo and is a shrine to the gods Sobek and Horus. The temple of Kom Ombo has two entrances, courts, colonnades, sanctuaries, and Hypostyle halls to commemorate each god. Local limestone was used to build this temple between 332 BC and 395 AD. Much of the original temple has been destroyed but we can still see the additions made to the decorations to the main court, the Coptic Church, parts of the “House of the Crocodile” and depictions of surgical tools on the walls (which represent Horus, who was a doctor).

The archaeological site of the Catacombs of Kom El Shoqafa is one of the seven wonders of the Medieval Ages. Between the 2nd and 4th centuries AD, the site was used as a burial ground. There are three levels of this site but the third and lowest level is underwater! In the Catacombs, there is a Hall of Caracalla (which contains horse and human bones), stone coffins, sculptures, and decorated walls. 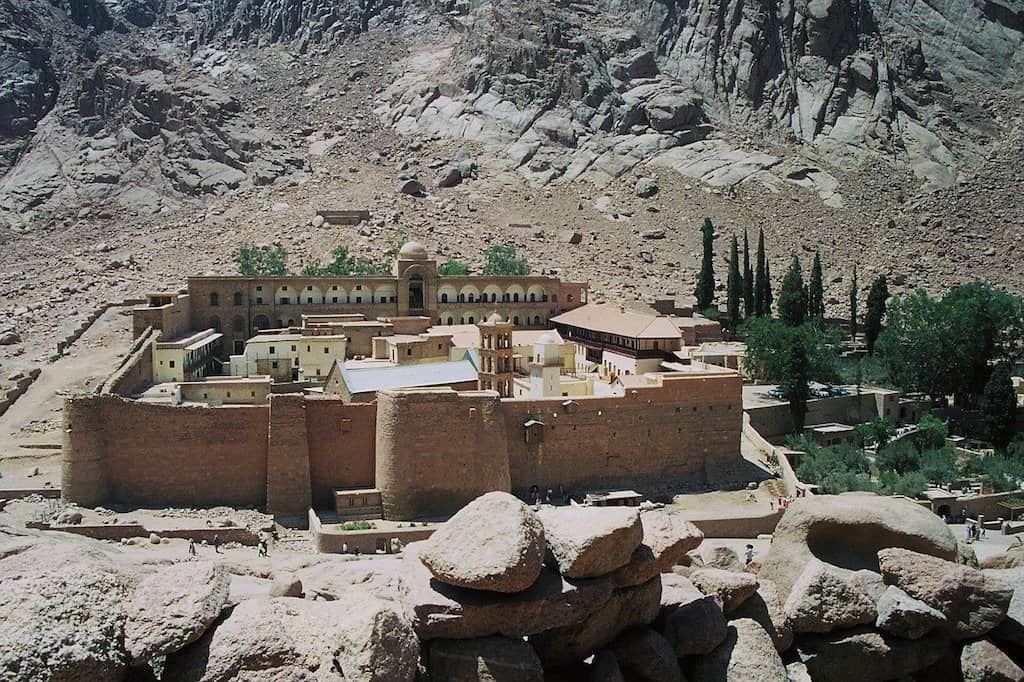 This Monastery sits at the mouth of Mount Sinai in the Sinai Peninsula. This working monastery was built from 548 and 565 AD under the rule of Roman Emperor Justinian I. This Egyptian landmark is different than others mentioned thus far because it was heavily influenced by the Roman and Greek qualities, which included Christian crosses and the use of granite. The original 527 AD structure of the church’s roof and doors is still standing today. Inside the church, there are three chapels, granite columns, and symbols of Christianity everywhere. 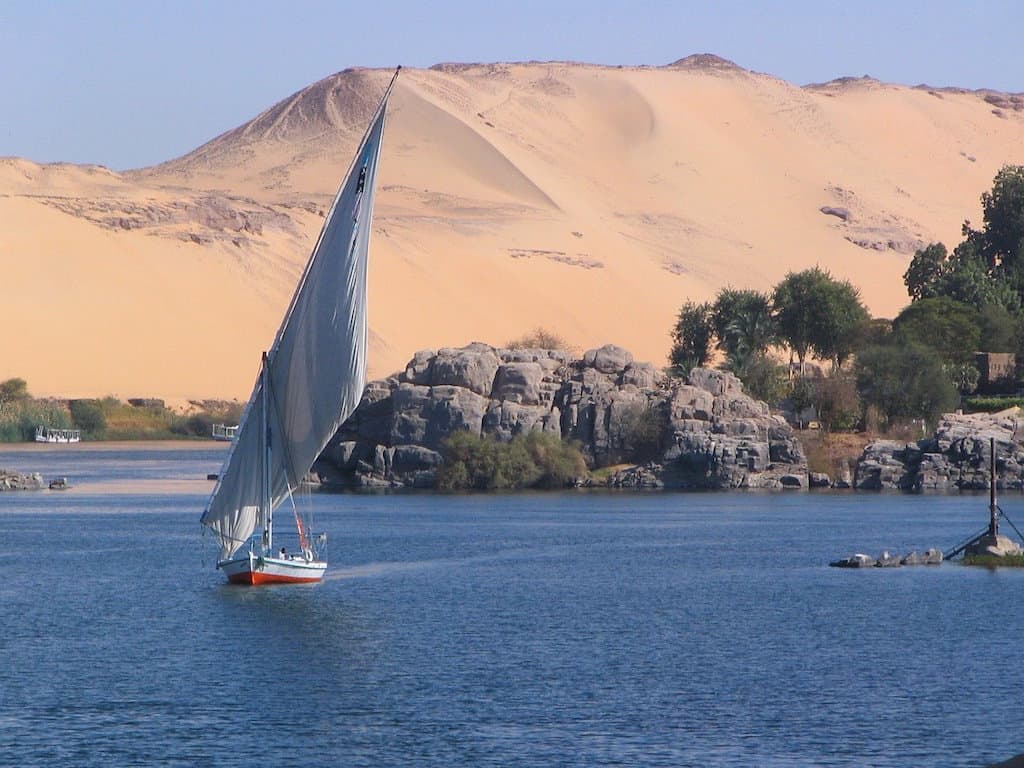 The Nile River is the longest river on Earth (4,132 miles) and flows from the African Great Lakes to the Mediterranean Sea. Ancient Egyptians believed that the Nile River was the origin of life, which may be why important cities such as Cairo and Luxor are near the river. In 1787, an important Ancient Egyptian object, the Rosetta stone, was found in the Nile Delta.

Off the coast of Taba is where you can find Coral Island, better known as Pharaoh’s Island. This site is primarily used as a scuba diving site along the Picasso Reef. This island was used as a Muslim fortress in 1170 AD. Pottery and other artifacts from this time period have been found at the bottom of this sea and near the towers of the island. 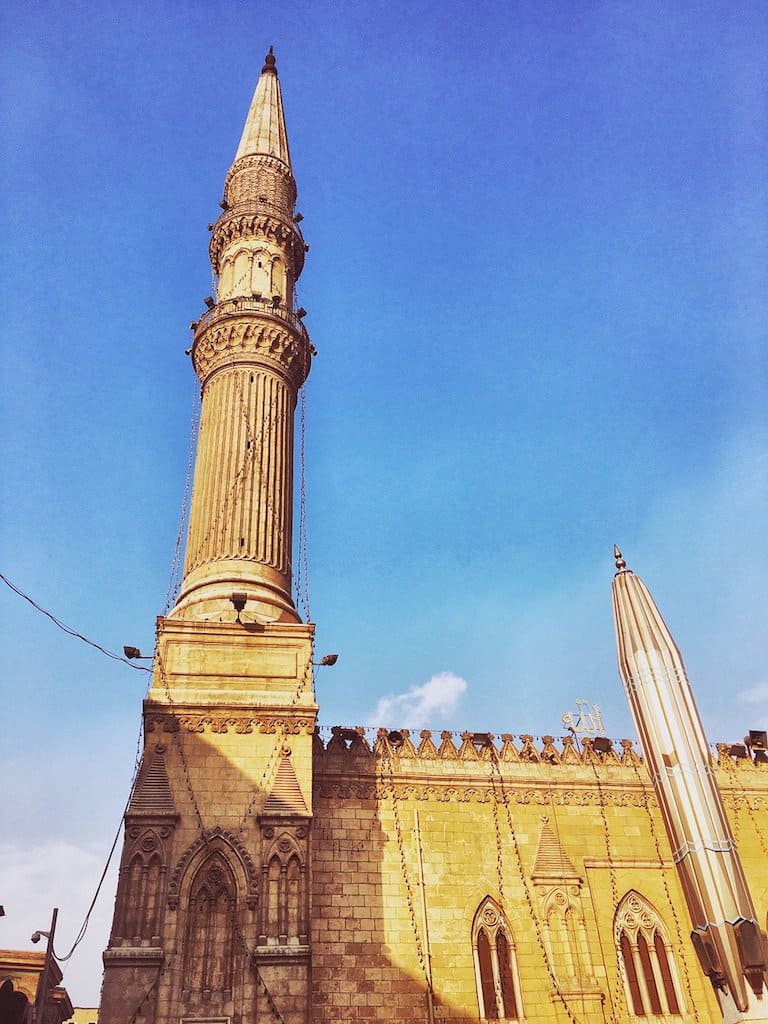 The Khan El-Khalili is now an Arabian open-market in Cairo that has restaurants, cafes, and clothing shops. The original bazaar was built in the 14th century under the rule of Sultan Barquq. Over the years, this marketplace was used as a foreign trade center. People from around the world visit this open-air market to buy spices, fabrics, antiques, handmade carpet, enjoy Egyptian food and attending the Feast of Sacrifice (Sufi) celebrations.

The Al-Hussein Mosque is a supreme and one of the most sacred mosques in Egypt, which only allows Muslims to enter. The original mosque was built in the 12th century and was built on top of the burial place of Fatimid Caliphs. The head (not body) of Hussein, the grandson of Prophet Muhammed is buried in this mosque. 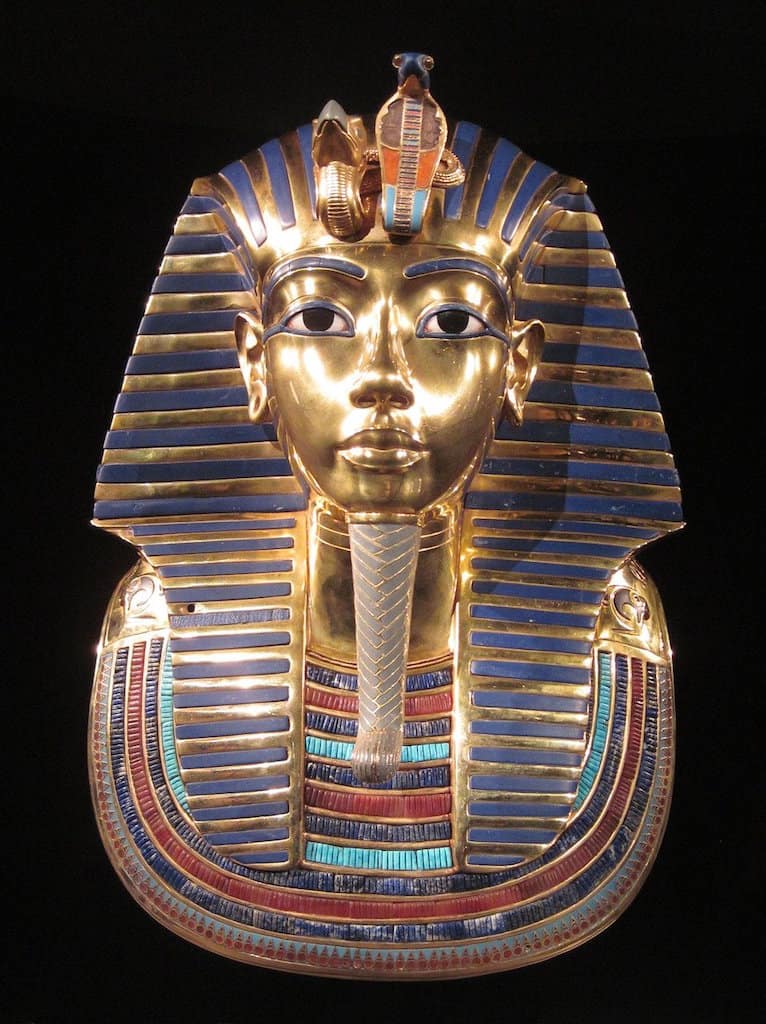 The Museum of Egyptian Antiquities is a symbol of faith for the Egyptian people. This landmark was built in 1900 and houses collections from the Old Kingdom until the Roman period. Museum halls house royal mummies and over 100,000 artifacts. Some of the antiques who will find at this museum include King Tut’s treasures, royal tomb of Tuthmosis III and IV, coins, and scriptures.

#2 Mausoleum of the Aga Khan

The Aga Khan Mausoleum was built to commemorate Sultan Aga Khan III. Aga Khan made a great impact on the Egypt culture and was the spiritual leader of the Ismailis. Agan Khan chose the site of his final resting place and his wife carried out the construction and completion (within 16 months). The inside of this mausoleum is dressed in red carpets and illuminating colors. Until this day a red rose is left on the tomb of Aga Khan, which was a tradition held by Khan’s wife until her death in 2000. 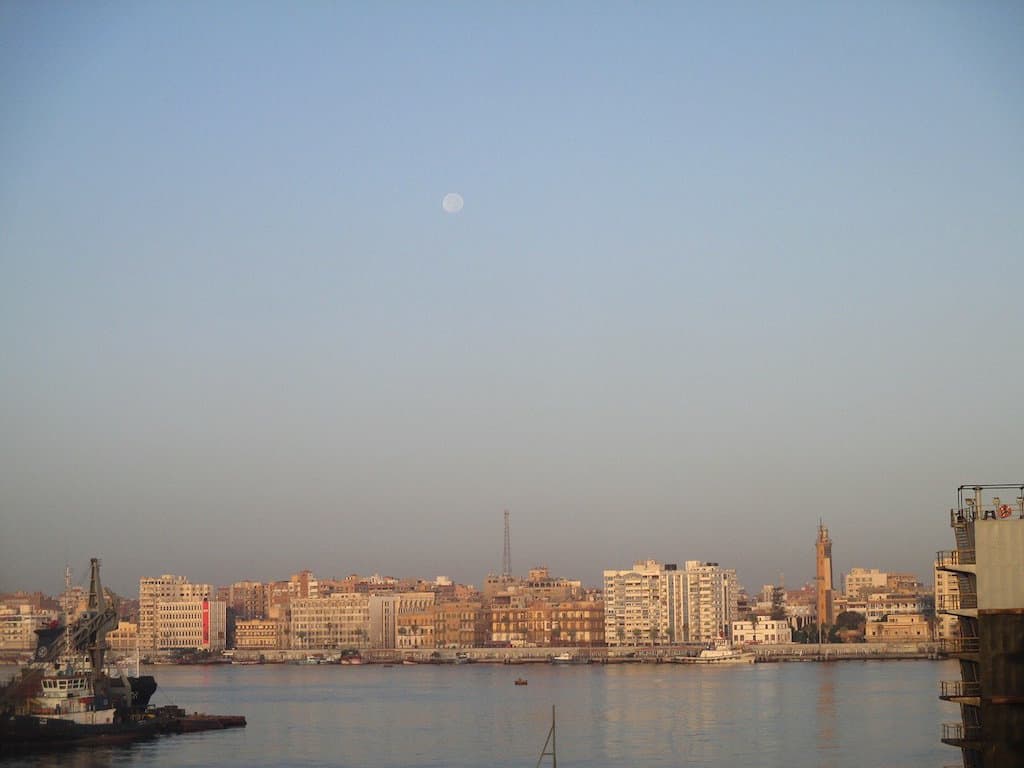 Historians believe that in 1850 BC, Pharaoh Senusret III ordered a canal to be made to connect the Nile River and the Red Sea, similar to today’s Suez Canal. This artificial canal was built in 1869 and is 120 miles long. Ferdinand de Lesseps built the Suez Canal is several stages by using steam-powered machines. In 2015, Egypt expanded the canal to accommodate an increase of at least 45 ships per day. 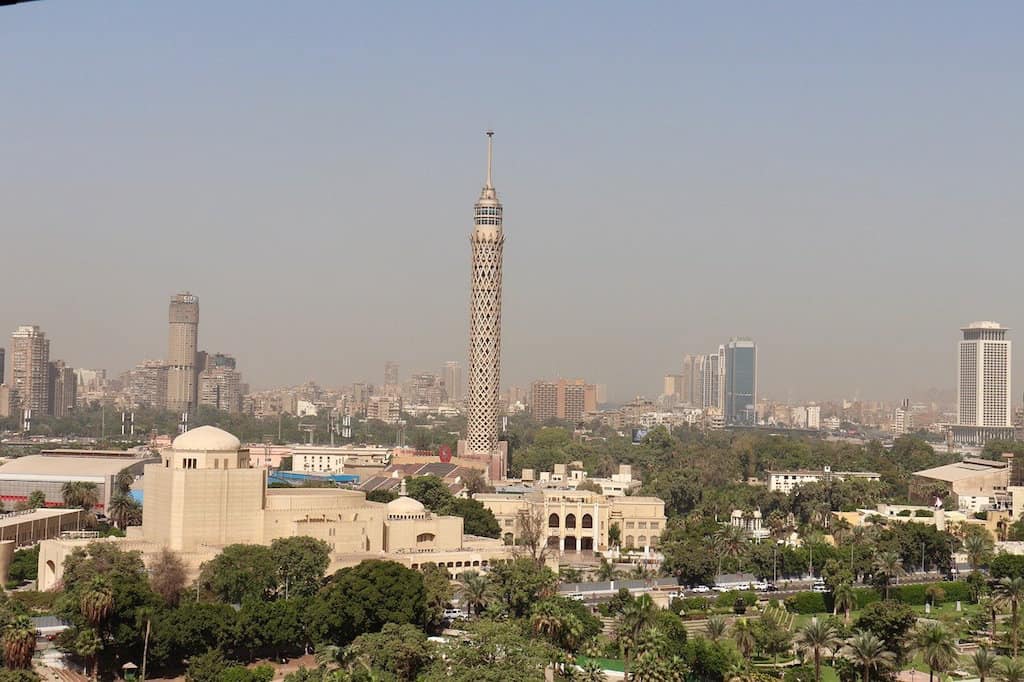 The Cairo Tower was built from 1964 to 1961 and lies at the center of the Zamalek district in Cairo. This tower is 614 feet high and has 16 floors. Some of the highlights of this tower include a cafeteria on the 15th floor, a rotating restaurant on the 14th floor, and an observation deck. This is a classic Egyptian landmark is a symbol of the growing capabilities of Egypt’s past, present, and future engineers.

Egypt has a historical significance in the world that dates back thousands of years. Ancient and present Egypt landmarks are stunningly beautiful and full of culture. All of the Egyptian landmarks on this list tell a story and are breathtaking to visit. Have you seen the Great Pyramids of Giza or the Sphinx? The Pyramids are definitely my favorite landmark in all of  Egypt. Which Egyptian landmark is the one you want to see? Or do you want to see them all?