Home » Destinations » Things to do in Istanbul: Discover Istanbul Cats!

Have you noticed how many cats there are in Istanbul? 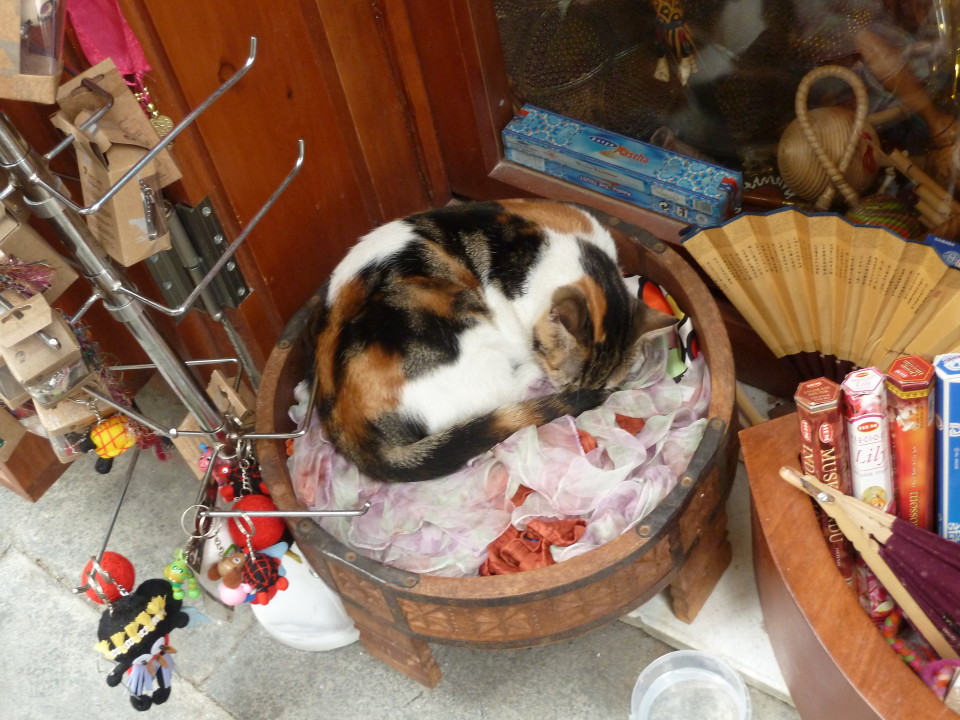 Now honestly,  I didn’t start out taking photographs of Istanbul cats. I was just going about my day, shopping in Istanbul, when I would spot one or two. In fact, I have to say that while I was there, I did notice an abundance of felines, but was so enamored by the city, that I really didn’t pay too much attention to them, AT FIRST! 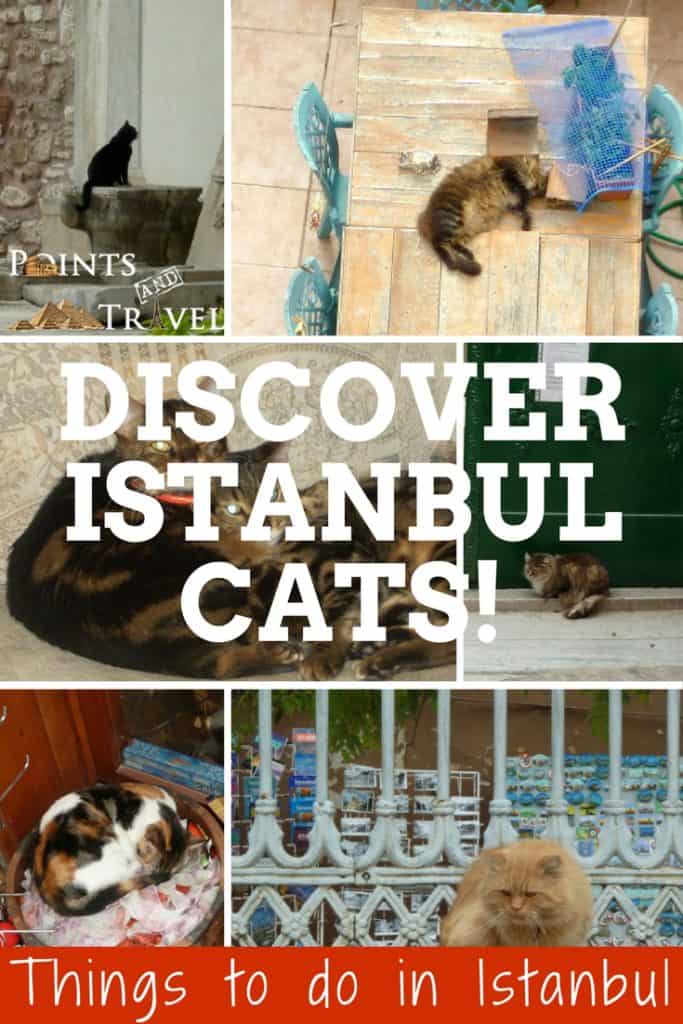 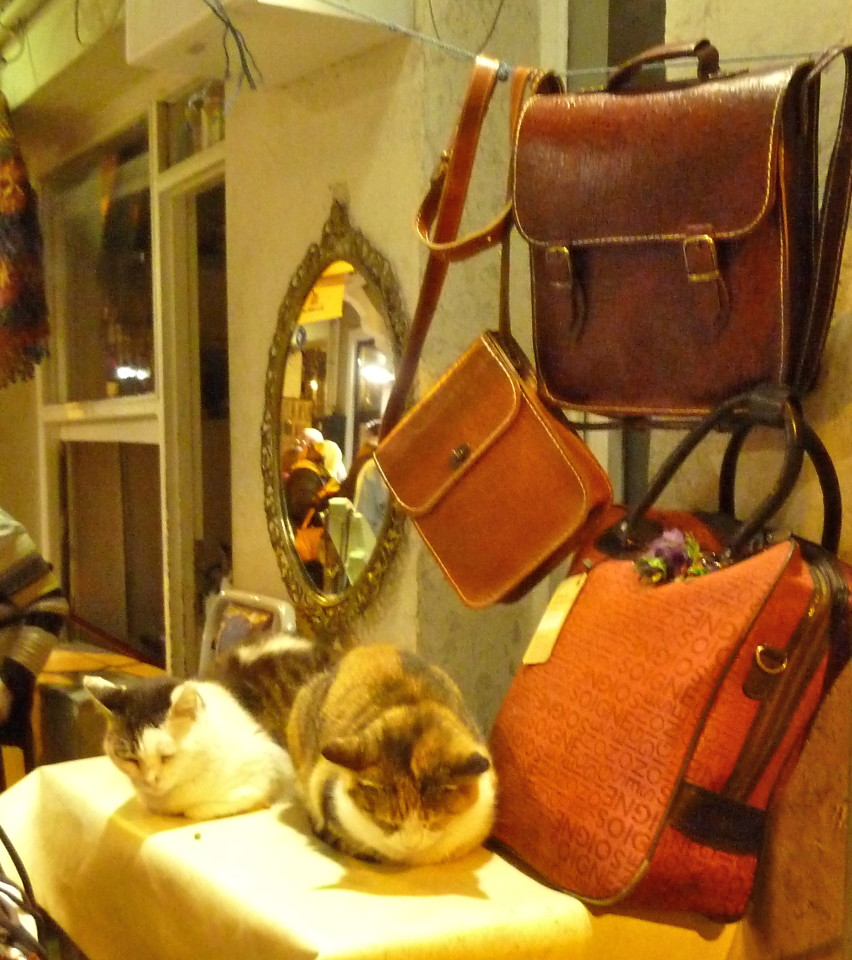 It wasn’t until I got home and started looking thru my photographs that I realized I had so many photographs of cats. Not dogs, but cats. You know how when you are in Mexico, you always see those stray dogs?  Well, you don’t see dogs here, here there are stray cats – pretty much in every color from black to white to gray to yellow to multi-color. Istanbul cats come in all colors! 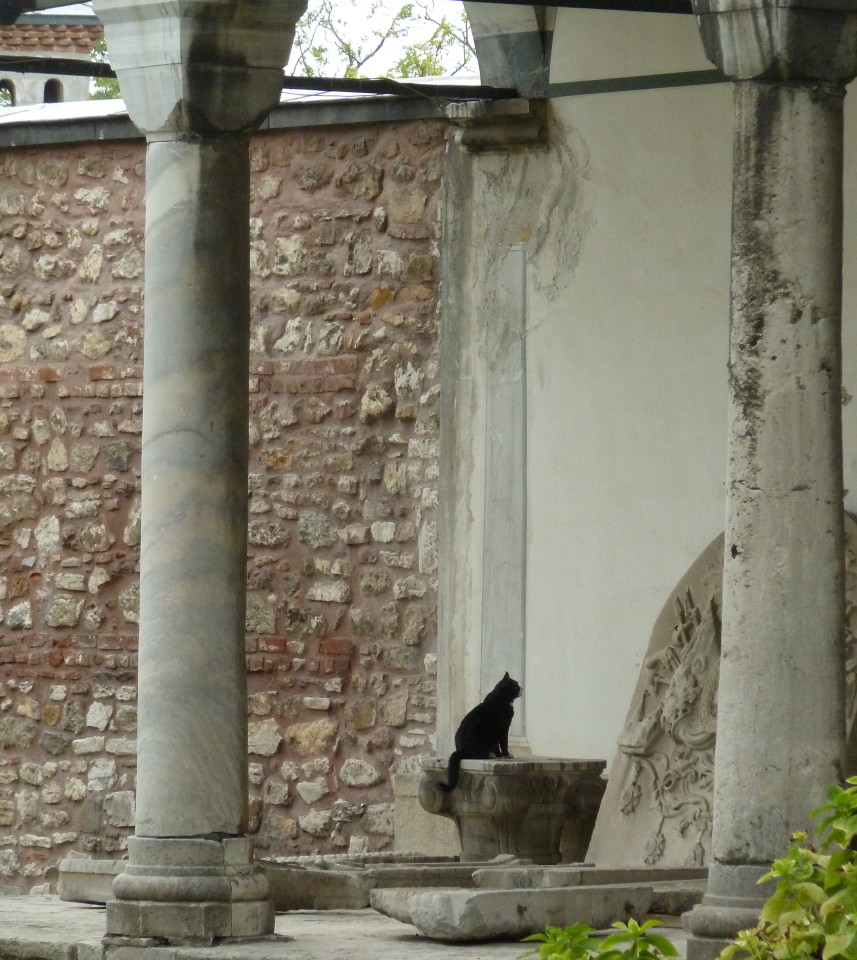 Apparently, the status of stray cats in Istanbul reflects the Islam ideas about tolerance and the Western ideas about animal rights according to an online article I recently read on Boston.com called  Stray Cats Strut Istanbul’s Streets, a symbol of tradition in a churning Metropolis. 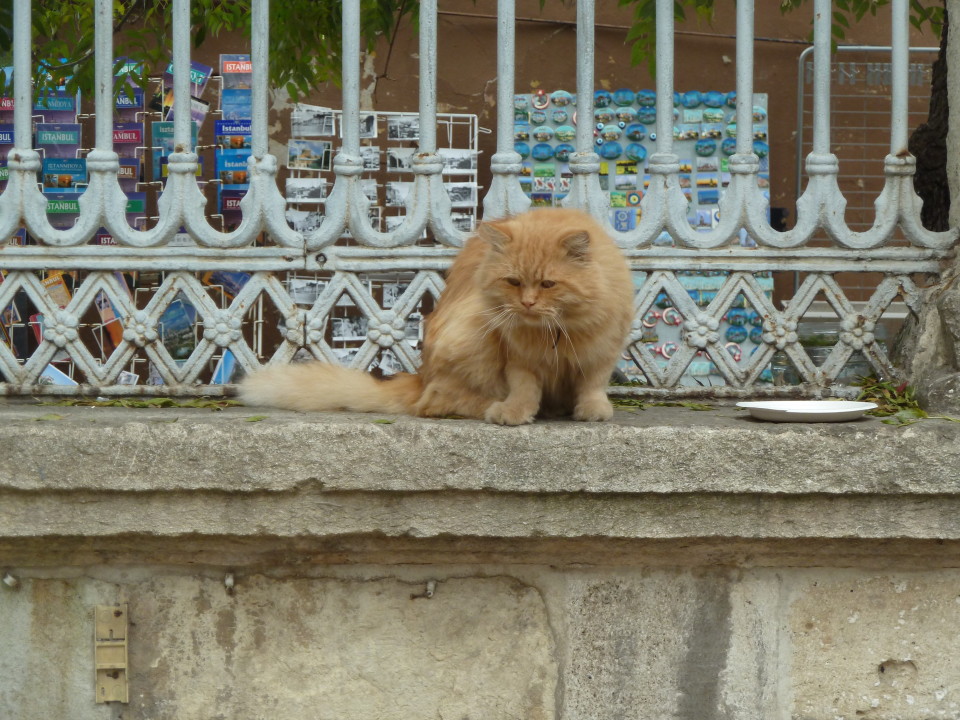 No, Seriously: Why Are There So Many Cats in Istanbul?

From what I learned, in Turkey, they have “cat teachings”, about the goodness of cats that all the children learn in school. Even Mohammed was a big cat lover. In this article I read about Turkey’s dogs and cats, the New York Times estimated that there are over 125,000 cats roaming free! But it hasn’t always been this way. 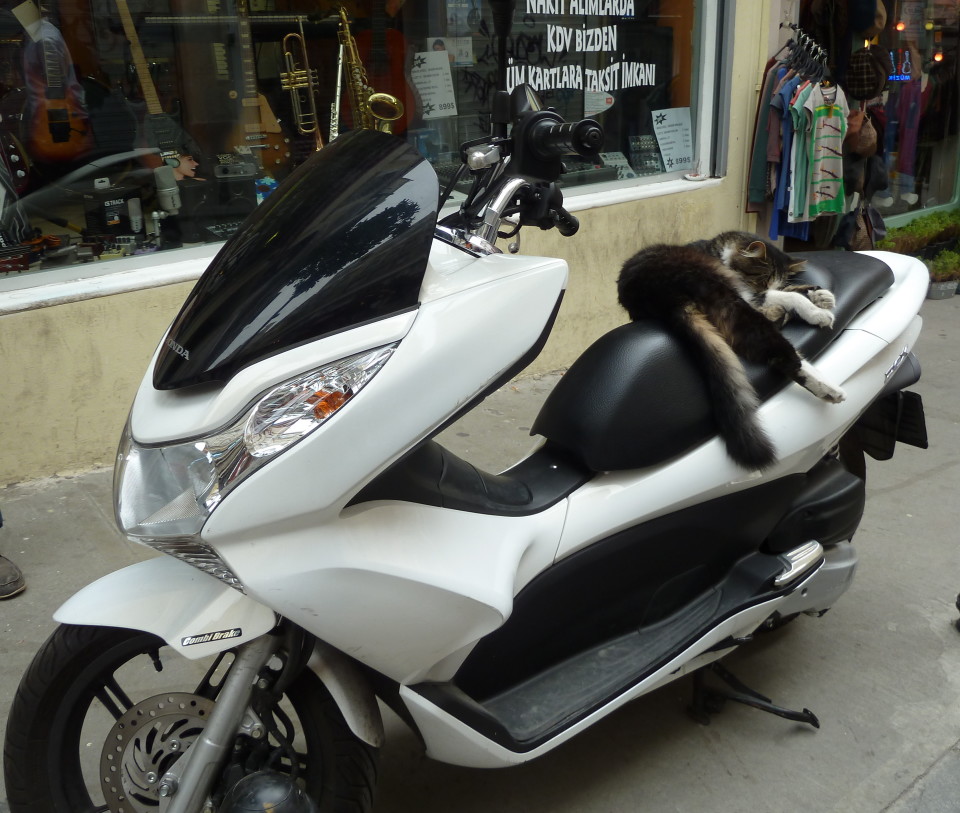 One story I heard was that Mohammad so loved his cat, that when the cat fell asleep on his sleeve, he cut off the sleeve rather than bothering his cat. Apparently, it is especially good luck to have a cat sleep on the grave of a loved one! Also, in Turkey, they teach that it is a big sin to hit a cat. 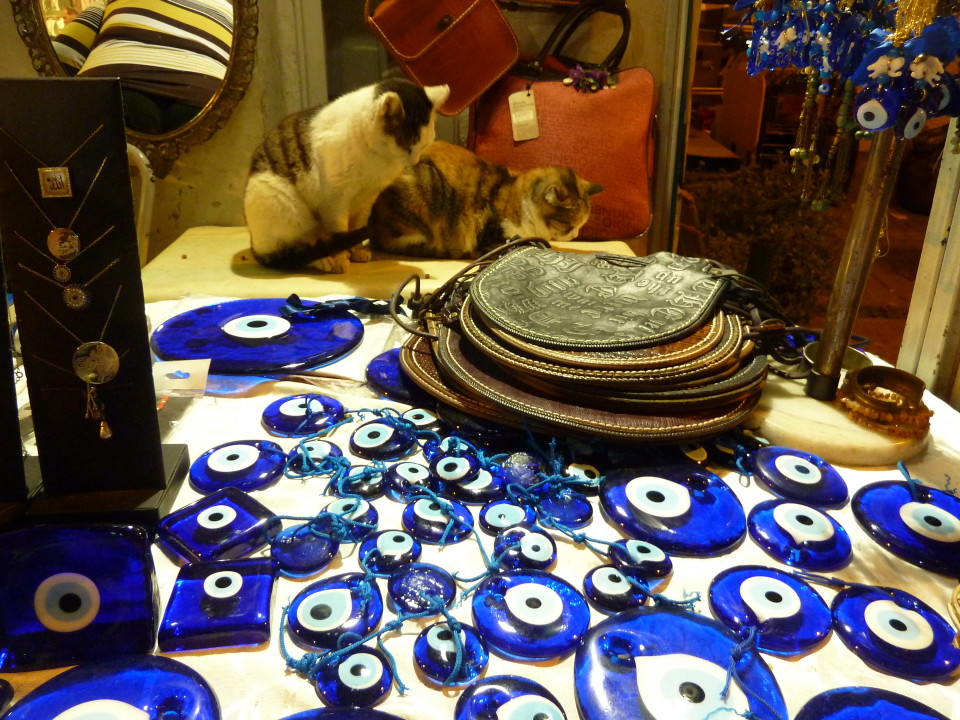 There is also a very popular saying in Instanbul: “If you kill a cat, you need to build a mosque to be forgiven by God.”  Woah! As I was wandering the streets of Istanbul, I saw many small containers by the sides of buildings. Soon I noticed cat food in bowls all over the city.  It seems that the cats are not adopted, instead, they are taken care of by no one and everyone, it is like a giant community networking to care for cats. 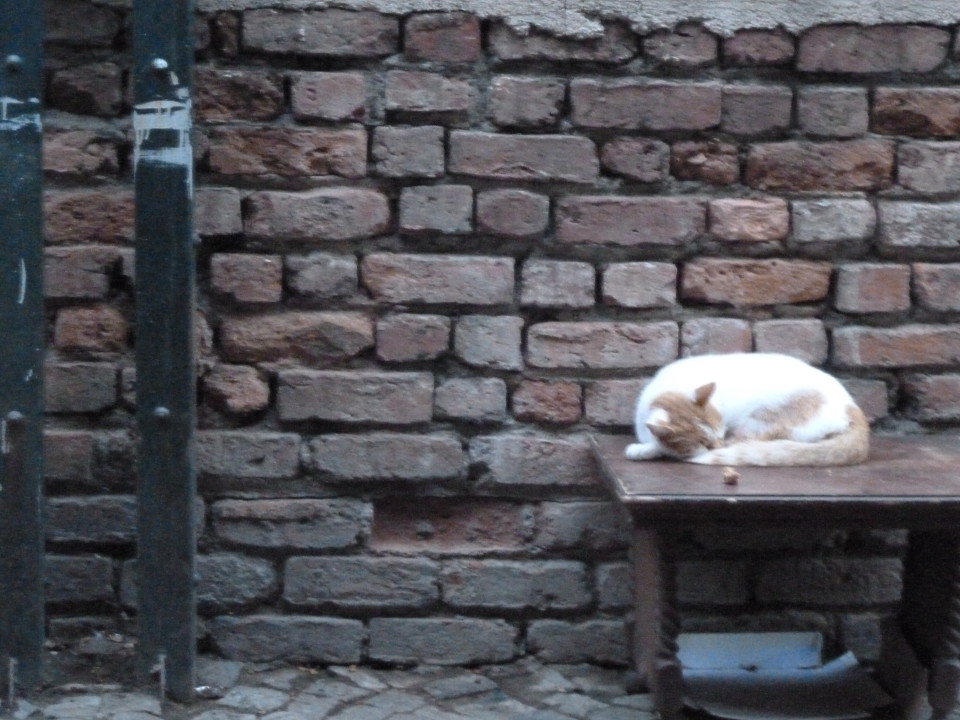 According to one article, I read “Cities around Turkey poison hundreds of dogs in the 90s.”  Which to me is sad. Poison is a painful way to die for the dogs. And once they die, they enter into the soil and can often get into contact with children who play in the play areas (soccer fields, dirt. parks). Many times the dogs are killed with citrinin.  Street animals, particularly dogs, are often a part of a developing city’s landscape and if they bite or poop on the streets, they may be hazardous to humans. In fact, the most serious consequence is rabies. According to the Turkish Ministry of Health, rabies is still a public health concern in Turkey.  But not cats! Cats are alive and well in Istanbul. 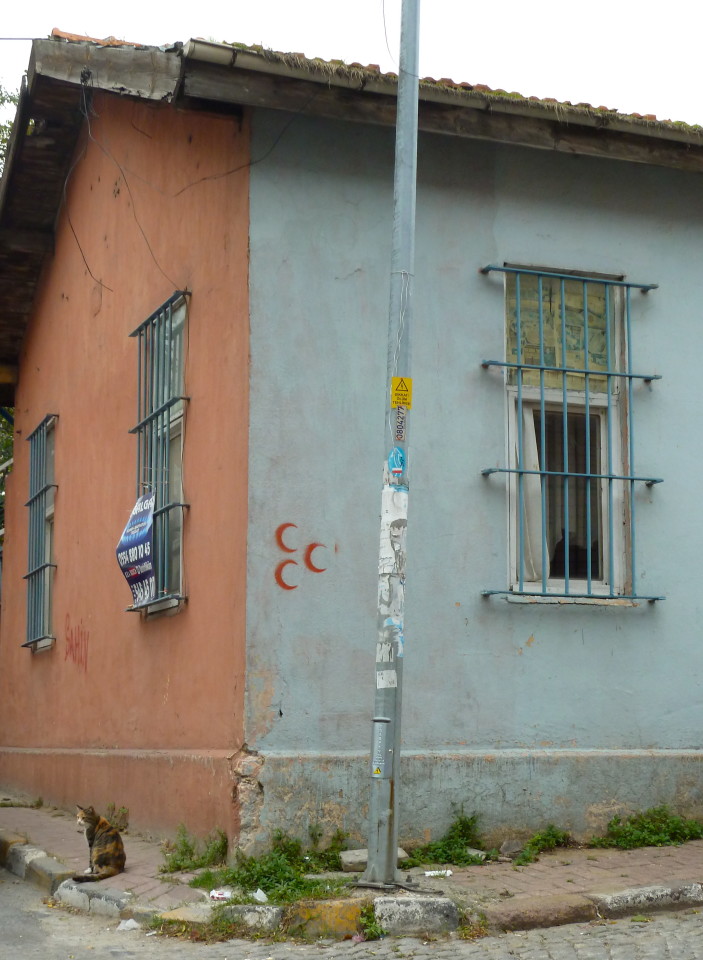 Back in 1910, Istanbul officials gathered up 80,000 stray dogs and took them to Sivriada, an island off the coast of Istanbul in the Marmara Sea. Some of the dogs died of hunger, while others were killed fighting each other in a starving stupor. Still, others perished under the burning sun on the island, where there is not so much as a single tree, or drowned in the sea trying to drink its briny waters. 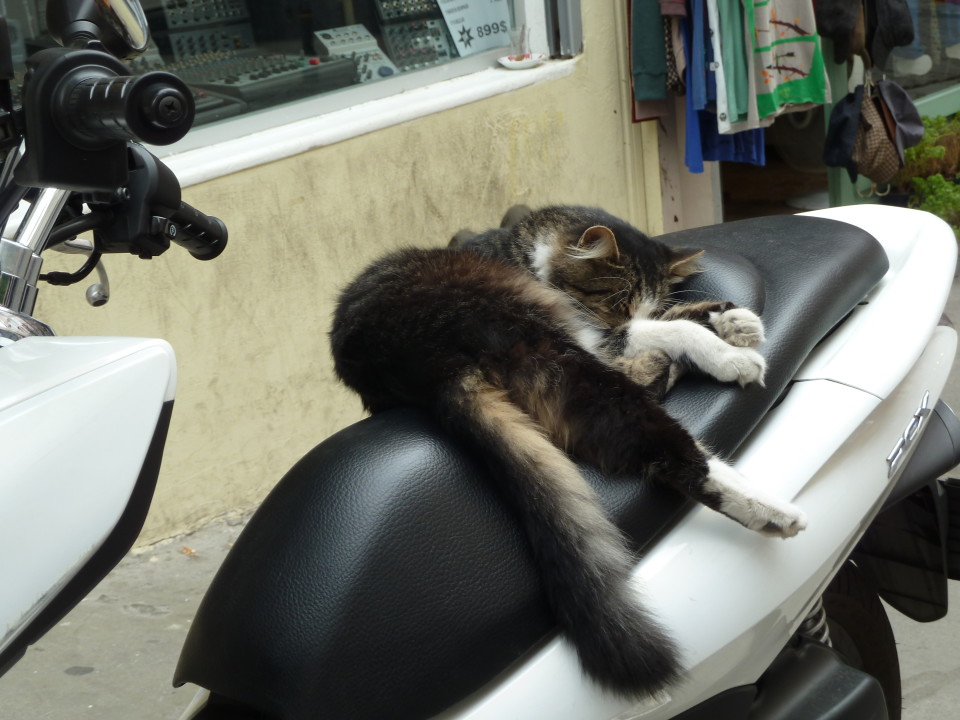 So at this point, I think it is safe to say that in Istanbul, the people believe that cats are good and dogs are bad! Unlike the USA, where people think dogs are good and cats are bad!  O, what a crazy world we live in.

You see, here I was, shopping in Istanbul for some gorgeous art and some dang cat crawled right up under my feet, this little guy above! I was just outside shopping near Chora Church, which is a must-see while visiting Istanbul. They had some beautiful art (plus cute cats!) 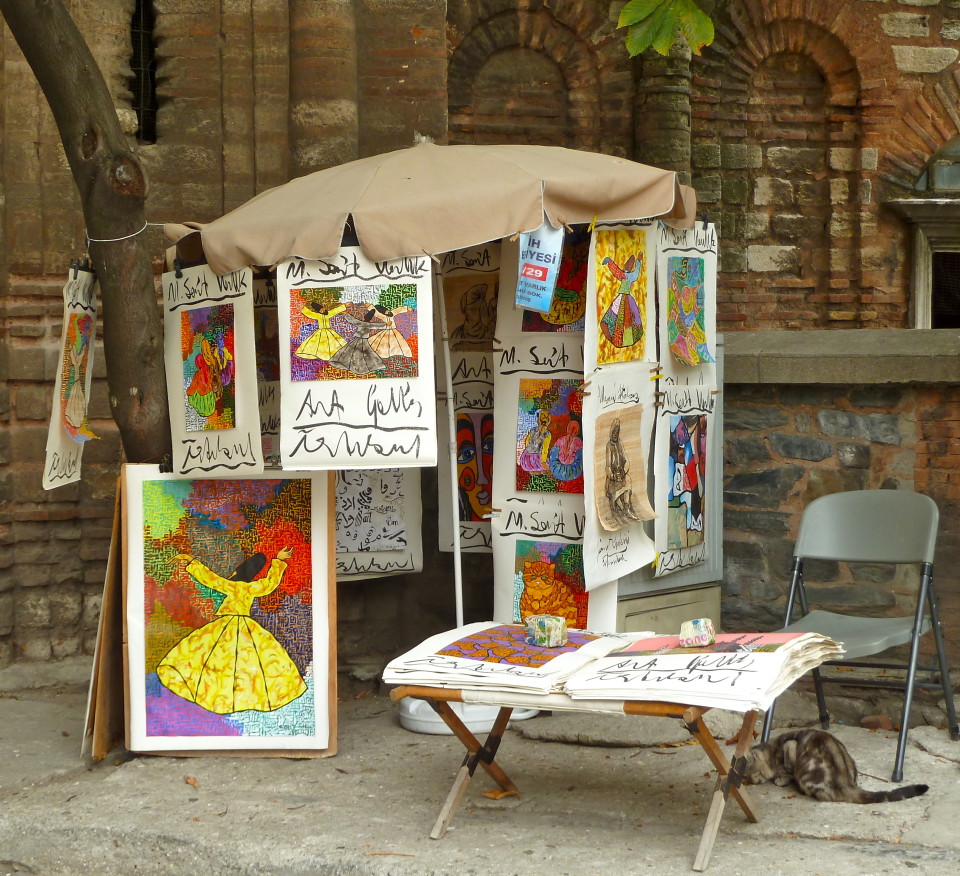 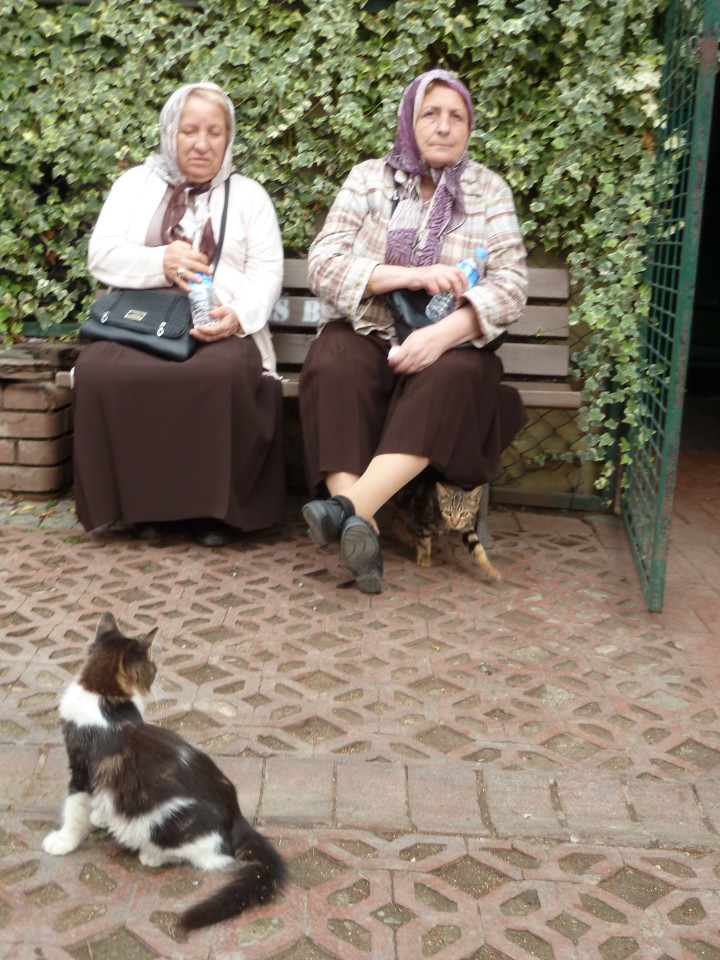 Now, look underneath the skirt of the little old lady above! They are coming out from underneath her skirt! But Istabulers pay them no mind!

To me, Chora Church or the Church of the Holy Saviour in Chora is the most beautiful church I have seen in the world! It is a medieval Greek Orthodox church that has been used as a museum since 1945 in the Edirnekapı neighborhood. Chora Church was built in the style of Byzantine architecture. The inside of the building is covered with some of the oldest and finest surviving Byzantine Christian mosaics and frescoes; They were uncovered and restored after the building was turned into a museum. 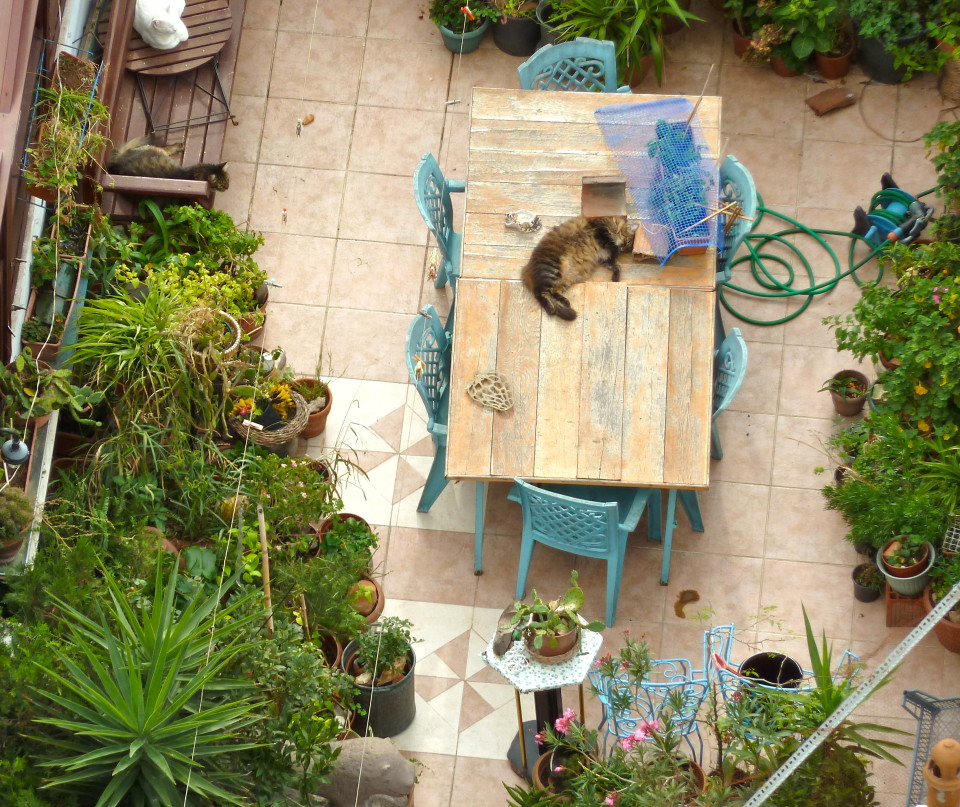 #4 Have Dinner on the Bosphorus River

Even when we don’t see the cats, we feel them at our feet while at a nice restaurant on the Bosphorus River! 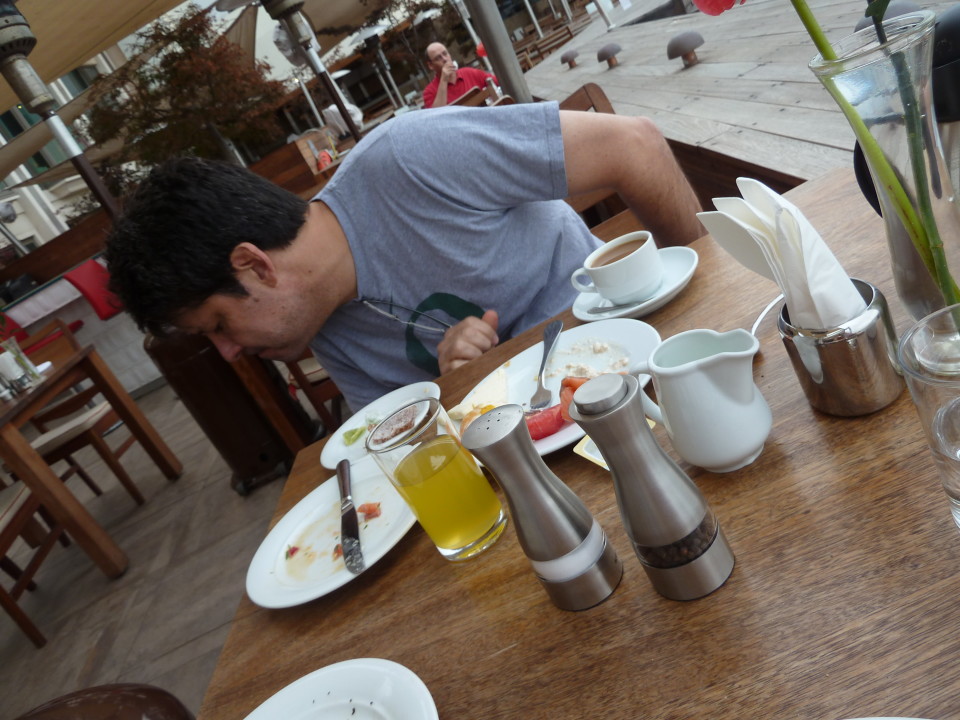 More Things To do in Istanbul

#7 Wander Through the Maze of the Grand Bazaar

#8 Visit the Galata Tower and Bridge

#9 Go Underground to the Basilica Cistern

But I do have to say…

I love my older dog, Coco Chanel Maloney. See her photo below. 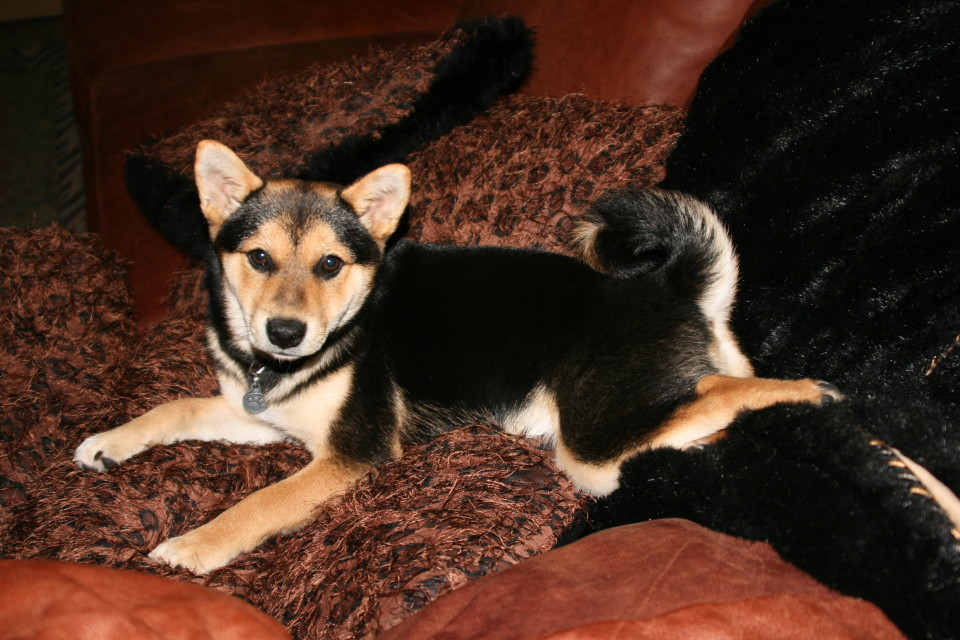 I also love my cats too, this is Boogie (boy) and Woogie (girl) Maloney. 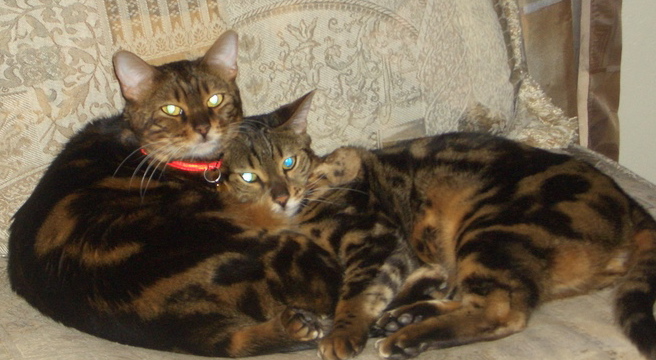 Things to do in Istanbul: Hagia Sophia

I love your stories about the iItanbul cats. I would like to post the one with the policeman on my Cats Around the World photo gallery, https://berkeleyandbeyond.com/Way-Beyond/Photo-Galleries/Photos-of-Cats/photos-of-cats.html and I will post a link back to your own photo gallery. Can you send it to me at 600 pixels?

Those cats are fun stuff! I loved them!

LOVE this post! Istanbul has just shot up my Bucket List very quickly ... because of all those cats! I am a cat lover and any place with this many cats and a love and tolerance of cats has gained a place in my heart. Great pics!

I love those cats too! Istanbul will not disappoint!

This is a greAt story! I noticed cats as well while there. But my cat likes to destroy everything in the house so I am becoming an unlover of cats. ---cousin shelley

Not me, I still love cats, but the OTHER dog my son has, Shasta, does drive me crazy!