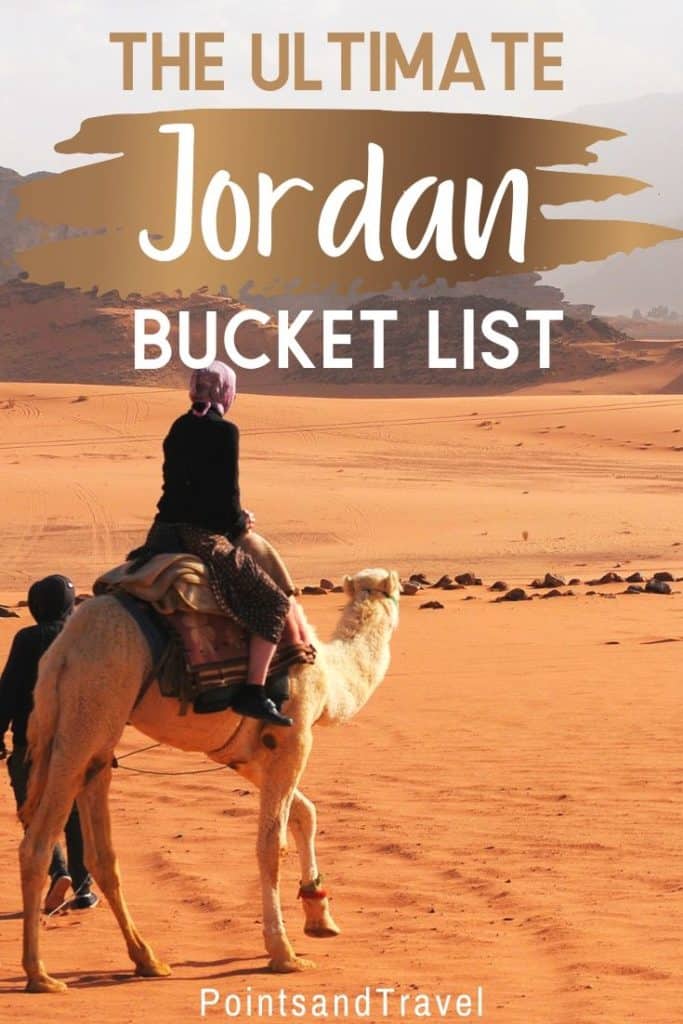 Truly we all have wondered what it would be like to travel to an Arabian country after watching Disney’s Aladdin, a tale from the book One Thousand and One Nights (Arabian Nights,  كتاب ألف ليلة وليلة)  and the joys of a camel ride in the desert! Indiana Jones also sparked my interest in Indian Jones and the Last Crusade.  In his search for the Holy Grail, it turns out that it resides in the canyon of the Crescent Moon.  Well, guess where that is?  It is in the ‘Treasury’ of the rock city of Petra in southwest Jordan, in Petra, Jordan.

But these are only Hollywood’s imagination and not the real Jordan that exists today.

A rose-red city half as old as time. – Dean Burgeon

According to the Old Testament, Moses first discovered God on Mount Sinai when he spoke to him from a burning bush, which was near the Red Sea, and in southern Jordan. There are repeated references in the Old Testament to God residing in Seir. The ancient Israelites called it Seir. It is now called the Shara Mountain Range around Petra. Can you imagine being there? in that very spot? I am not sure that anyone knows exactly where that spot is, but, at least we are in the vicinity. 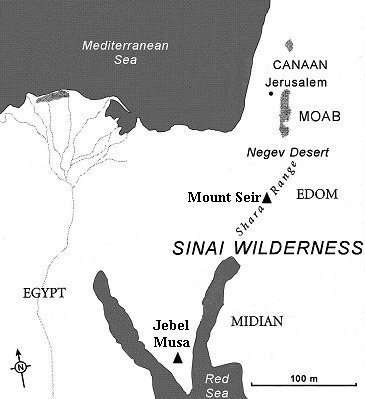 The main entrance to the 2000-year-old city of Petra, Jordan’s amazing rock formations and carvings is through a narrow gorge in the rocks, known as a  Siq. 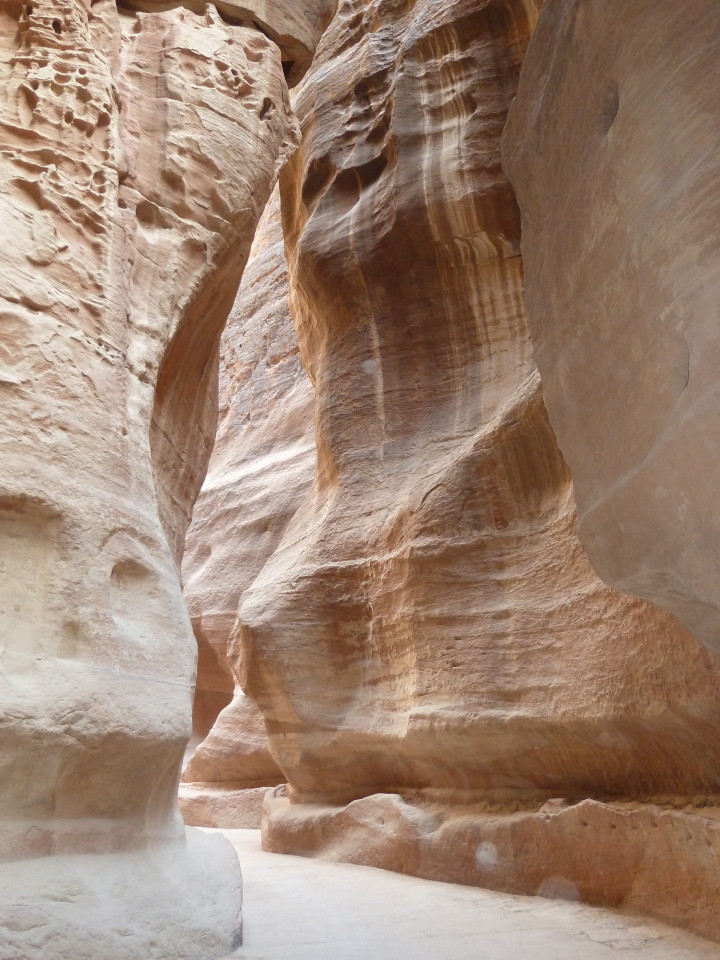 Petra, Jordan Walk to the Treasury

The walk is for roughly a mile to the first major site, known as the Treasury.  It is flanked on either side by soaring 250 feet high cliffs.   Just walking through the Siq is an amazing experience. The facades carved into the rocks are truly spectacular.  As you walk through these rock formations, you will encounter many of the Bedouin people, donkeys, horses, and camels.

Thirty years ago, in an attempt to preserve Petra, Jordan, the Jordanian government relocated its cave dwellers to a nearby village more than 1 mile away, and shortly after Petra was declared a UNESCO World Heritage Site.  These people who were relocated  –the Bedul tribe – are the only people allowed to sell or work inside Petra.  As you reach the end of the Siq,  you will catch the first famous glimpse of the Treasury. 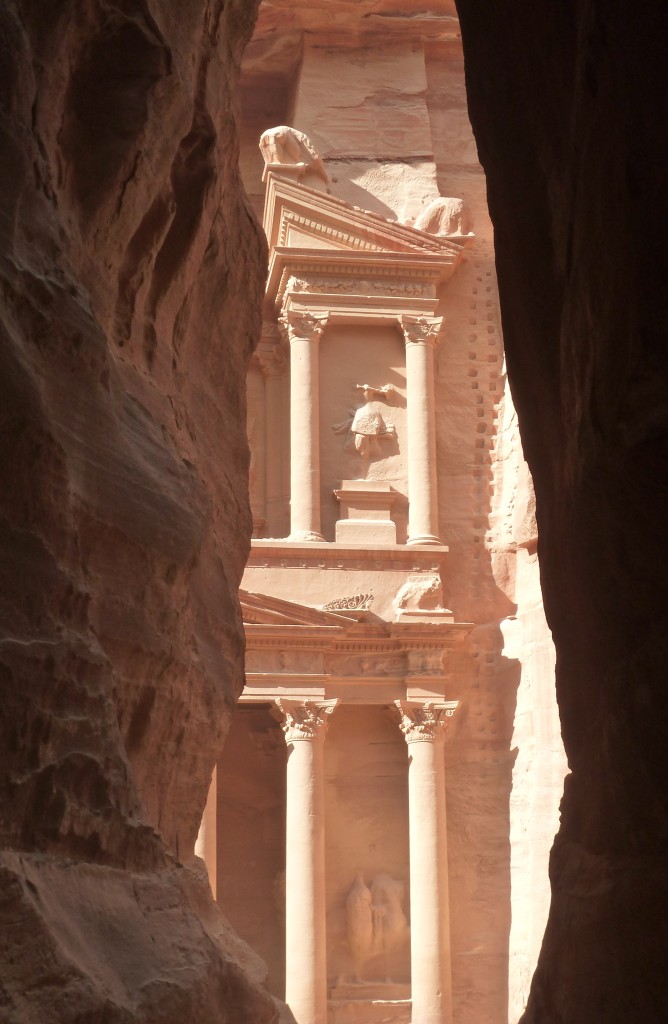 Walk further and you will see the beautiful carvings on the sides of rocks.  They are giant, elegantly carved tombs and statues and columns.  These were done by these Bedouin people in 25-38 AD! In case you are interested in a more rustic entrance, the Siq al Baird, also known as “Little Petra”, opens up into a temple that is considered the back entrance into Petra, Jordania. 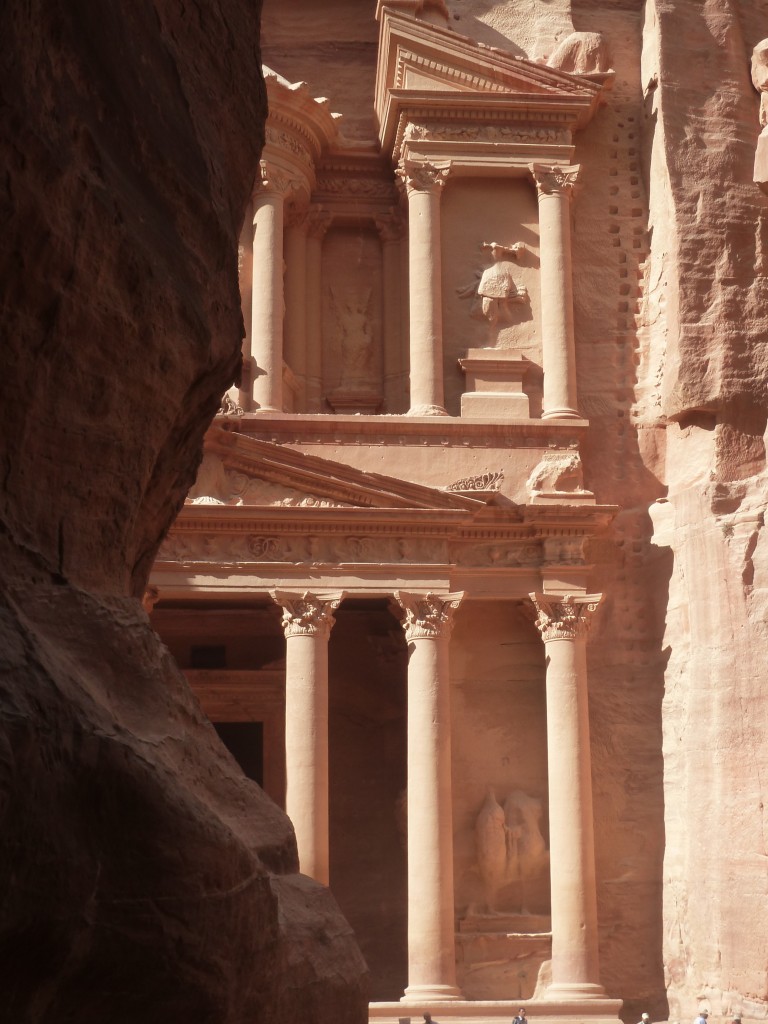 Although much has been written about Petra, nothing really prepares you for this unusual and awe-inspiring place.  It has to be seen to be believed. Today the Jordanian people are welcoming and hospitable, loving the tourist trade that brings you to their beloved PETRA.

“Where are you from?” and “Welcome” are common words coming from the Bedouin people, even the children are trained to say this to the travelers. They understand that tourists bring in money to their families and they are quite friendly.  The Bedouins – numbering only about 1,000 people, represent a distinct case of an indigenous people encountering the benefits, as well as the threats of rapid modernization. 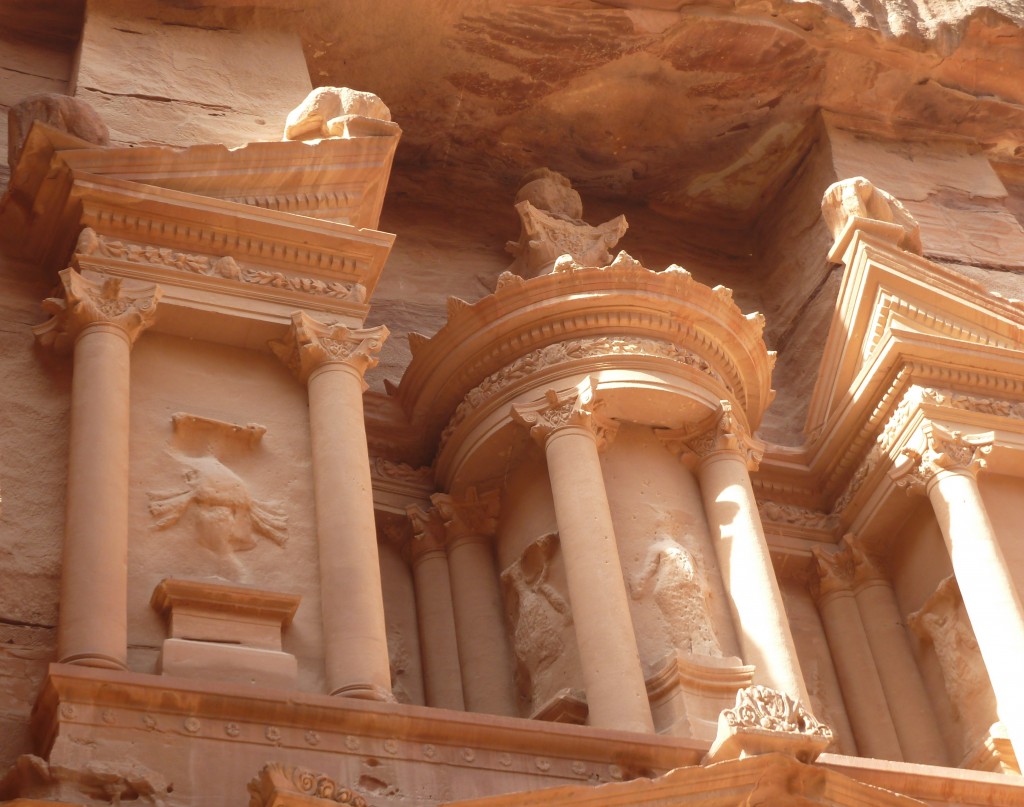 These ruins remained hidden to most of the world until the Swiss explorer, Johann  Burckhardt, disguised as an Arab scholar, infiltrated the Bedouin-occupied city in 1812.   Wow!  I can hardly imagine this happening.  What a brave soul Burckhardt must have been to infiltrate their society.  I consider myself somewhat of an adventurer, but not that adventurous.

The accounts of his travels inspired other explorers to discover Petra even further.  David Roberts, a Scottish artist who created a number of accurate and detailed illustrations of the city in 1839, was one of them.  Remember at that time, photography had not even been invented yet!  I know this is hard for our digitized world to even imagine.  Here’s a copy of one of his drawings: 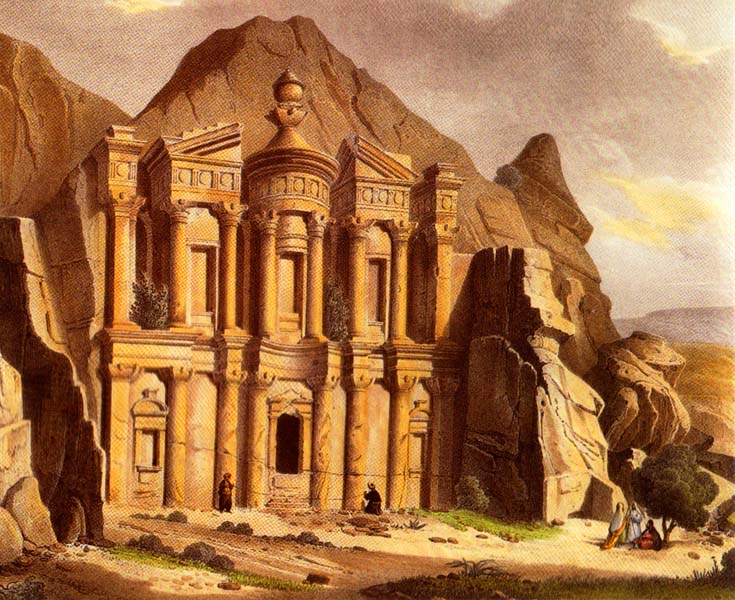 Off the beaten path – Petra

My trip to Jordan was nothing short of spectacular.  As a traveler and one who recommends places to go and things to do, this is definitely off the beaten path, and yet one in which many tourists do. Your level of comfort will depend on your comfort with being in the Middle East, along with its customs and its people.  There are plenty of modern (and amazing) hotels, high end and low.

There are even caves if you are brave or curious enough and want to spend the night under the stars.  This is one of those places in the world that you will never forget and will have regrets if you don’t finally make your journey to Petra. 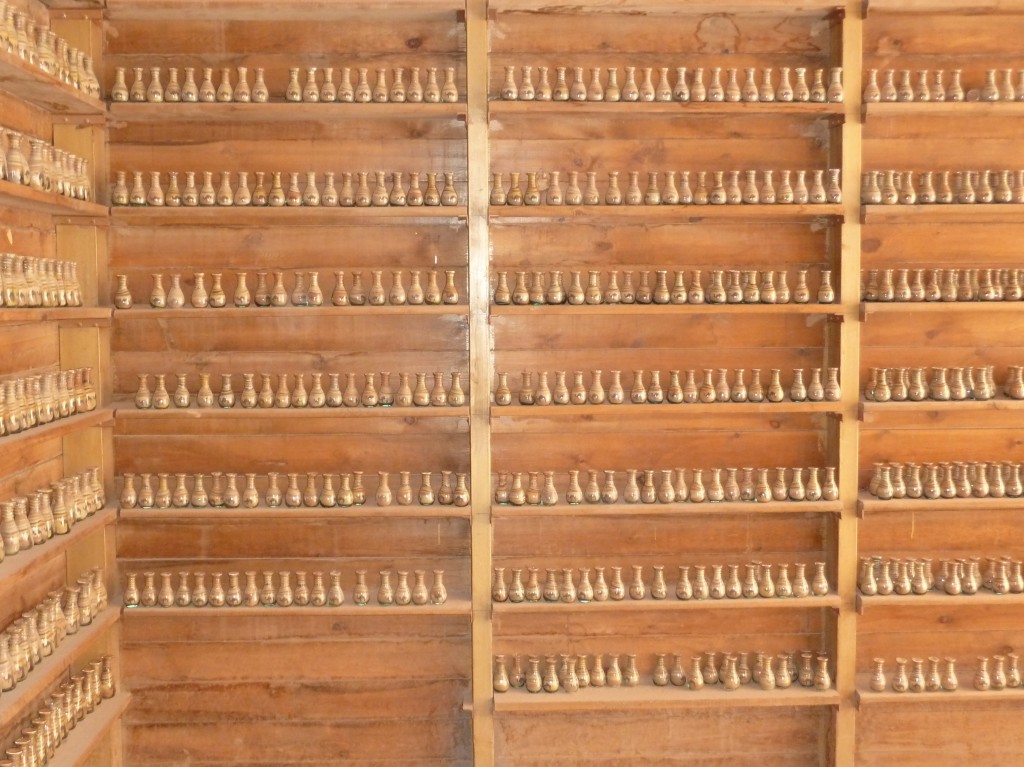 Bottle shops where they write your name in the sand. Petra, Jordania 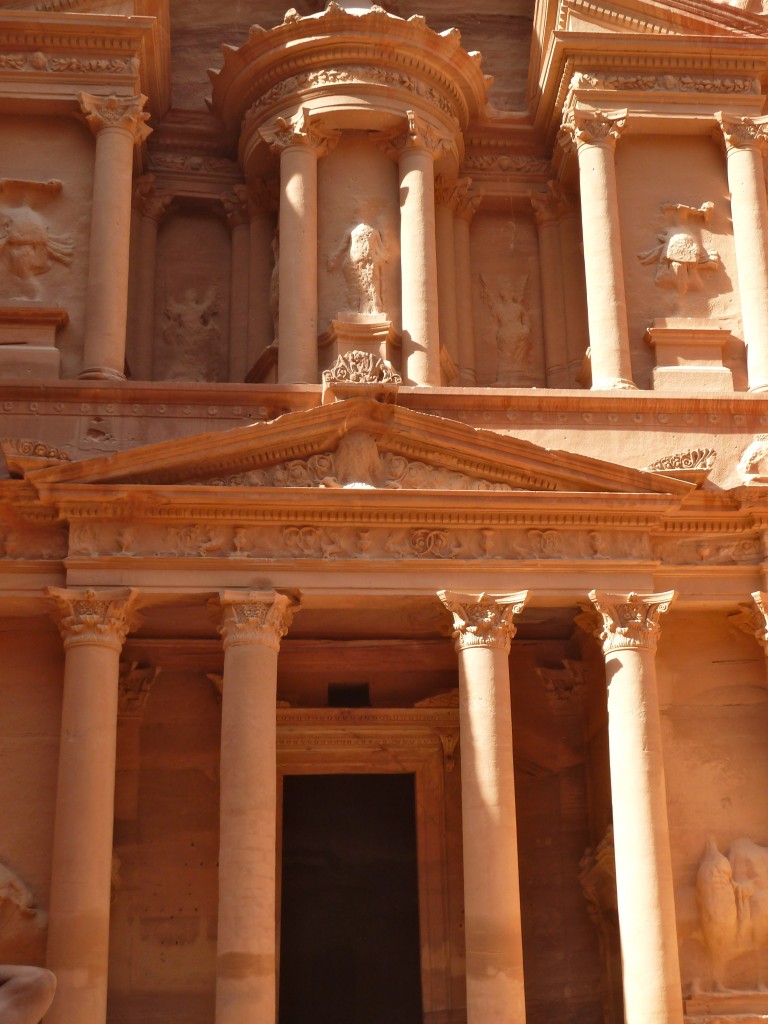 A candlelit night in the city of Petra, Jordan

Listening to Silence – Jordan By Night

Top Things to do in Jordan 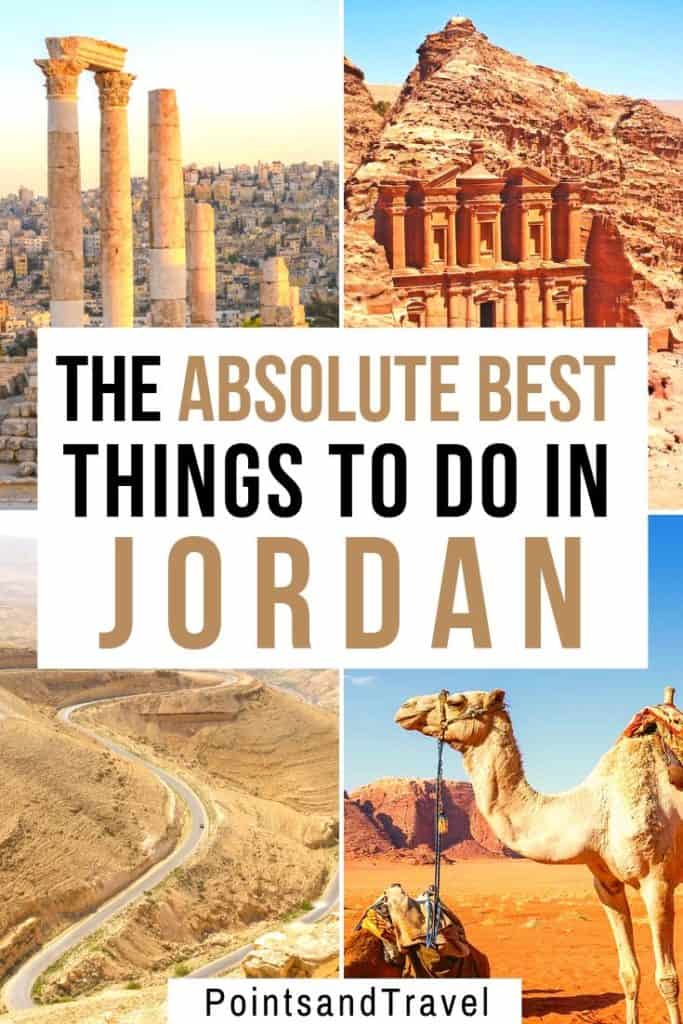