Komodo Dragons: Komodo Island is Worth A Visit!

Picture yourself in one of the over 17,000 islands in the Republic of Indonesia. One of the most notable and particularly interesting islands is known as the habitat of the Komodo dragon. It is the largest lizard on earth and known as Komodo Island. But no need to worry, the Komodo dragon is not the only species roaming around the island. There are over 2,000 people that live in this East Nusa Tenggara territory.

Komodo, Indonesia is also a great place for tourists to enjoy the pink beach as well as to go scuba diving! Don’t expect to have a photographic memory, so bring your smartphone and take pictures of everything you see. Especially when the Komodo dragons come out to play! Also, don’t forget to take a photo of the sand as you leave at the sun’s last light -as it is gorgeous. But don’t be tempted to take any sand with you, as the shells and sand of the Komodo Park are protected!! 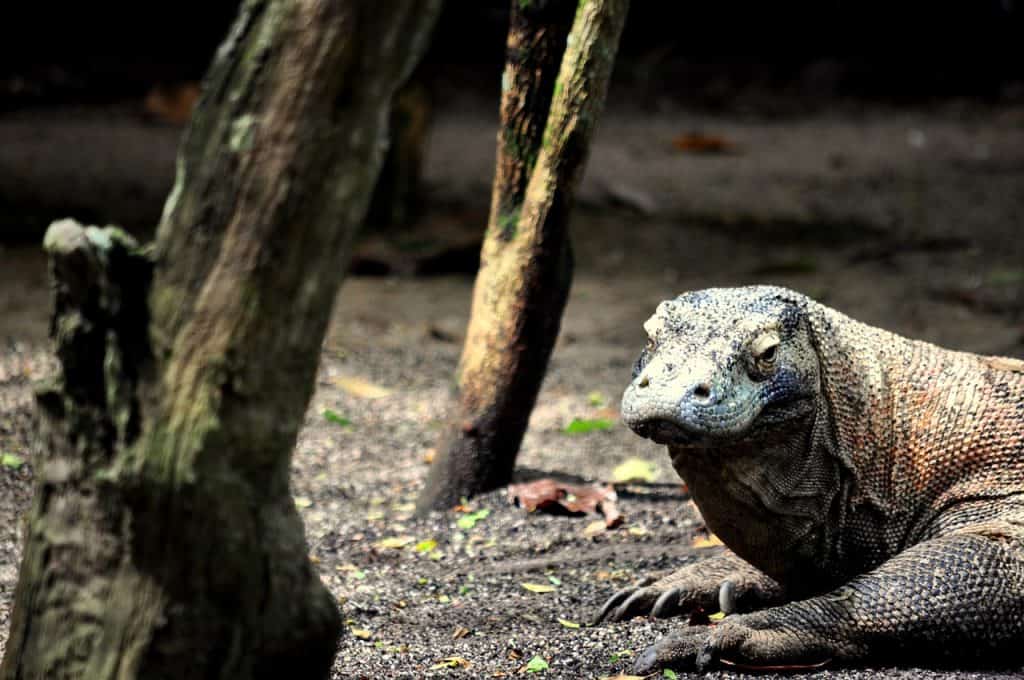 Picture of a Komodo Dragon in the Komodo National Park

I can guarantee you that the moment you step off that boat and walk down the wooden pier onto the land, your heart will begin to beat just a bit faster in anticipation of seeing these ancient land animals. They hang out in the forest of trees in front of you! However, the Komodo dragon is not the only type of species that you can see while visiting the Komodo Dragon Island. Komodo is home to over 4,000 wild birds, different species of mammals, fish, and reptiles. Basically, it is an animal sanctuary and birders paradise! 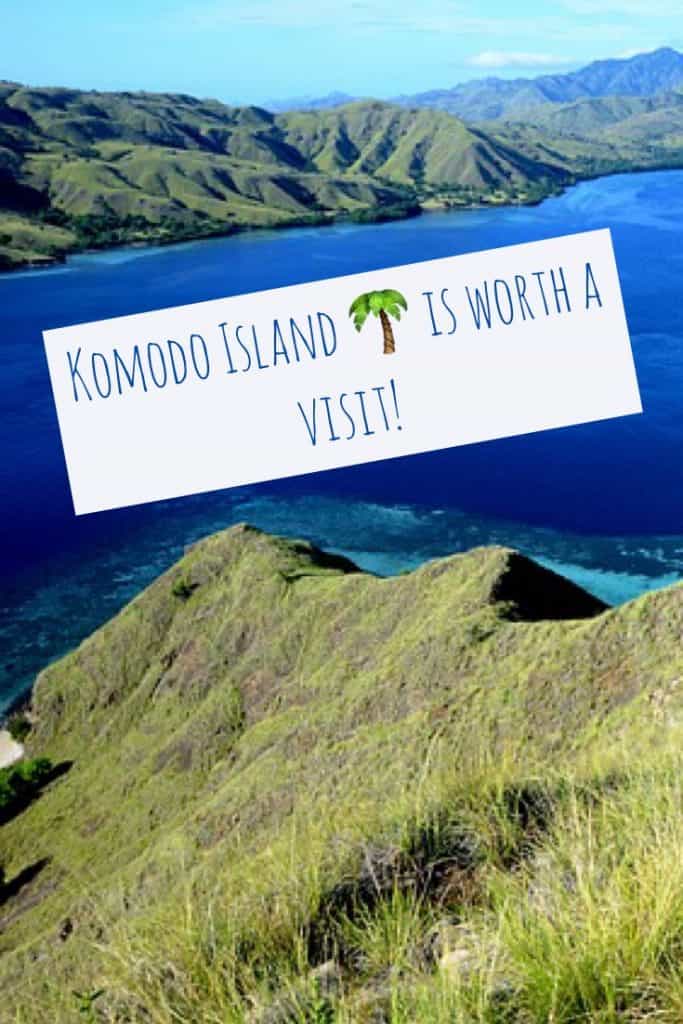 ✦ Komodo Dragons: How Old Are They?

If you thought the Komodo dragon was roaming the earth during the time of the great Tyrannosaurus, you would be half right and half wrong. Even though the first meeting between humans and animals was a little over a century ago, this hissing dragon has been evolving for over 40 million years.

The Komodo dragon was officially seen for the first time by Europeans during the early 1910s. The discovery of this dragon was completely by accident. This fierce creature was given the name “land crocodile” because it resembled a large crocodile. There are at least 1,700 Komodo dragons that live on Komodo Island. The remaining 4,000 or so dragons are spread out throughout the islands of Rinca, Gili Motang, and Flores in the Republic of Indonesia.

✦ Komodo Dragons: How Big Are They?

Even though we mainly see pictures of Komodo dragons in gray colors, there are also blue, orange, and green dragons. Although the Komodo dragon is restricted in its hearing, they can see almost 1,000 ft. away. These dragons have a typical lifespan of about 30 years and are an endangered species. 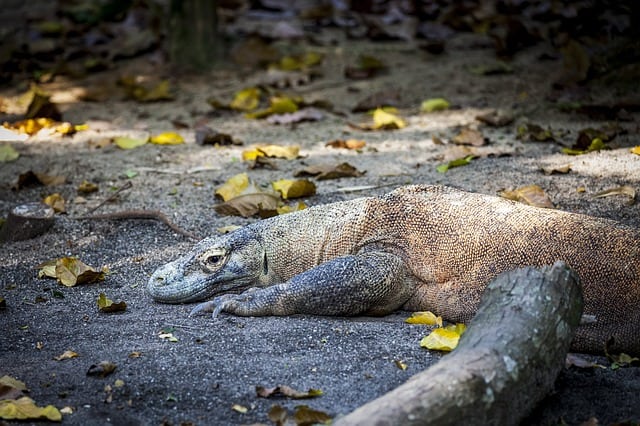 ✦ Komodo Island: What Do They Eat?

If you are wondering what do dragons eat? Their favorite dish of the Komodo dragon is the carrion (the decaying flesh of a dead animal) and they are carnivores. Imagine if you could see a Komodo dragon ripping carrion from limb to limb and swallowing it whole with taking on a breath. That would be quite the sight to see. The most common foods of the Komodo dragon are birds, water buffalo, deer, and goats. I saw quite a few deer on the island when I was there.

Yes, Komodo dragons are venomous. However, the way a Komodo dragon kills its prey rapidly is via its sharp teeth first, then its venomous bite. Apparently, the Komodo dragon venom decreases its prey’s blood pressure rapidly, expedites blood loss, and sends the prey into shock. It then becomes too weak to fight.

The Komodo dragons population is relatively stable, but scientists are concerned that only 350 of the 5,000 dragons are breeding females. However, this may be a normal sex ratio, scientists are not sure, as they don’t know a lot about the species. At times, there have been cases of illegal hunting and loss of habitat to human settlement, so there is that threat as well. 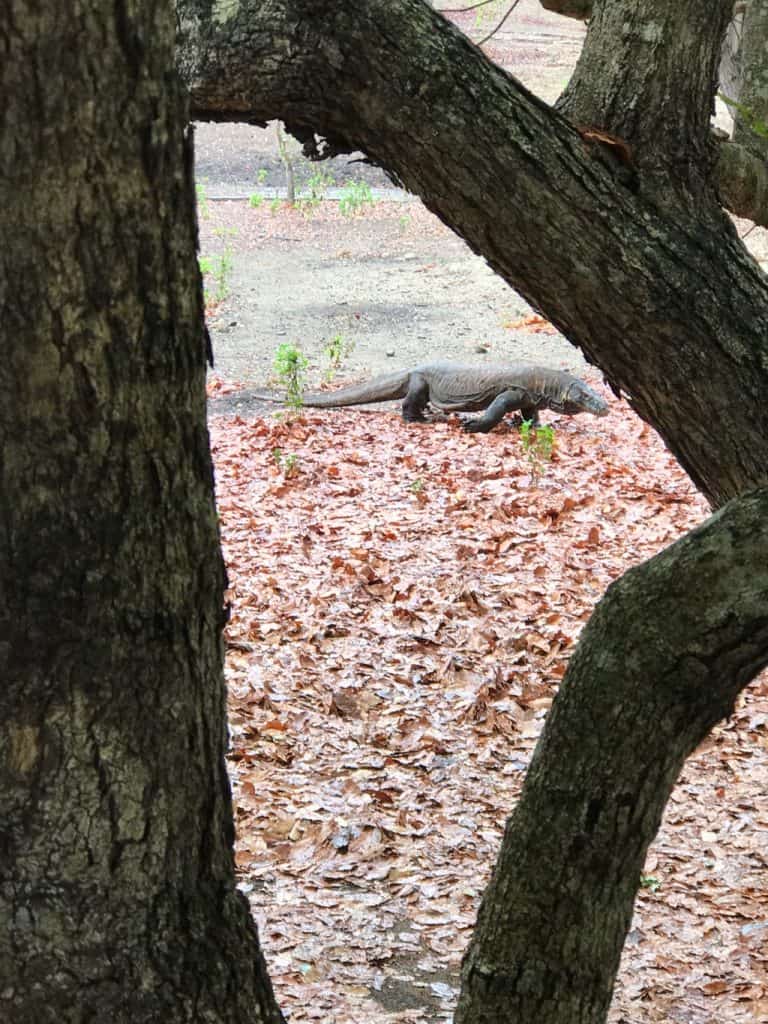 Komodo dragons are dangerous, so keep your distance. Although they look docile and slow, they can move super fast. They have been known to strike people and there are a few attacks on people per year since humans can be a potential food source. The most important thing to remember is that Komodo dragons can be dangerous to humans.

There have been many Komodo dragon attacks on humans during the years and unfortunately, five people have died. Keep this in mind the next time you are swimming at the Pink Beach because Komodo dragons are amazing swimmers. With all that being said, there is no reason to stay away from visiting Komodo Island.

✦ Komodo Island: Where is it located and When is a Good Time To Go?

Komodo Dragon Island is in South East Asia. It is part of the Republic of Indonesia and of the Lesser Sunda Islands. The rainiest season for Komodo Island is from January to March and the “coldest” months are July and August (but they are still scorching hot).

An interesting fun fact about Komodo, Indonesia is that most of the residents are direct descendants of people who were exiled from surrounding areas because of their criminal record. Komodo has a surface area of 150 square miles and is a large part of the Komodo National Park. The original formation of this island began 1 million years ago.

✦ Komodo Island: How Do I Get There?

One way to get close to Komodo Island is via airplane. You can reach this island from Jakarta or Bali. The closest national airport is known as Komodo Airport or Labuan Bajo. The best route to take is from Denpasar (Bali) to Labuan Bajo because of the flight a little over one hour. You can easily find flights on Travelocity.

Once you arrive in Labuan Bajo, you will need to have a booked tour to visit the island. An alternative way to visit Komodo Island is by ferry. The ferry option can take a whopping 36 hours from Bali to Komodo. It seems to me that the rocky waters of the sea will have you wishing you were in an airplane. I actually came in on a cruise from Holland America, as it was one of my stops on my around the world cruise, so I thought it was perfect! 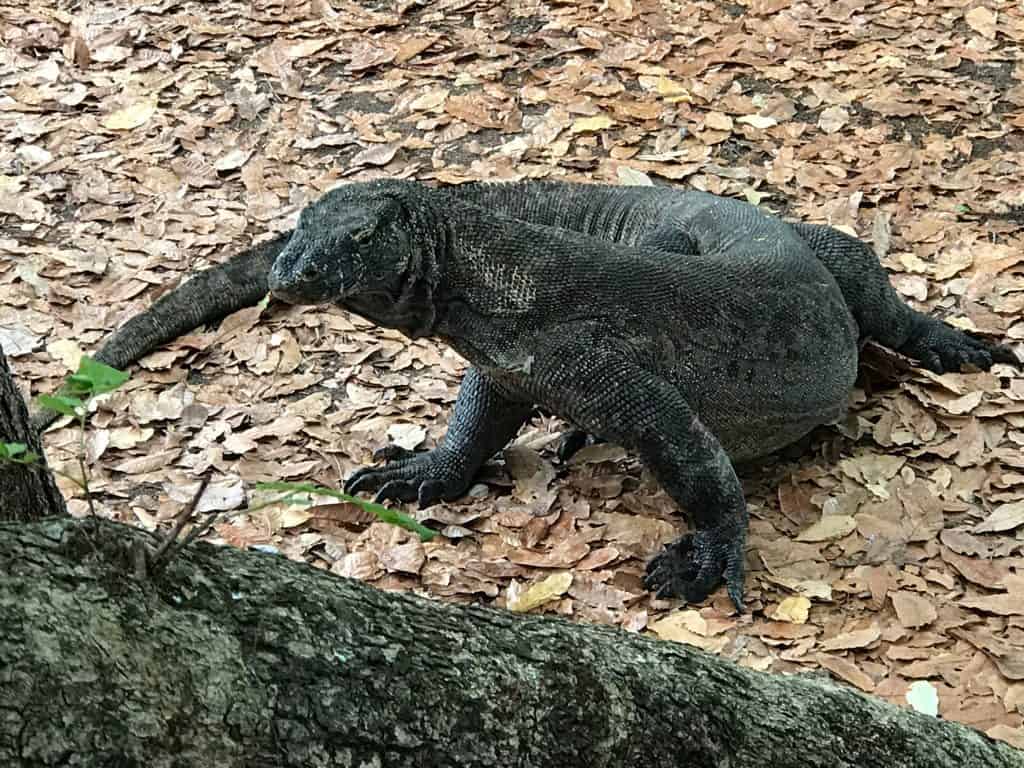 ✦ Komodo Island: Where do Tourist Stay?

But if you want to stay around here for a luxurious stay in Komodo, you must stay at the Plataran Komodo Resort and Spa. This remarkable resort has its own private beach for guests to enjoy the Indonesian sea and sun. This resort offers 24-hour check-in, cable tv, airport transportation, a children’s club, laundry service, free breakfast, free Wi-Fi, spa services, and a safe deposit box at the front desk.

However, there is only a limited number of villas, 14 to be exact. It is best to book a villa in advance to guarantee you have a room! If you are looking for a more low-key place to stay, then the Komodo Boutique Hotel is perfect. This hotel has air conditioning, breakfast included free parking, and free airport transportation. Most rooms have a view of the stunning garden on the hotel property. Another place to stay in is the quaint bed and breakfast place known as The Teuz B&B. This B&B is cheap for a room with air conditioning. It is the type of place that a mini-moped would really make it easier to travel around the island.

A Komodo tour should be chosen depending on the type of tour and how many nights you wish to stay. For example, you can enjoy a Komodo Excursion from a boat. This type of tour can run about $60 and includes a one-day tour of the Komodo National Park, a visit to Pink Beach, and a chance to see the Komodo dragons, deer, and pigs. 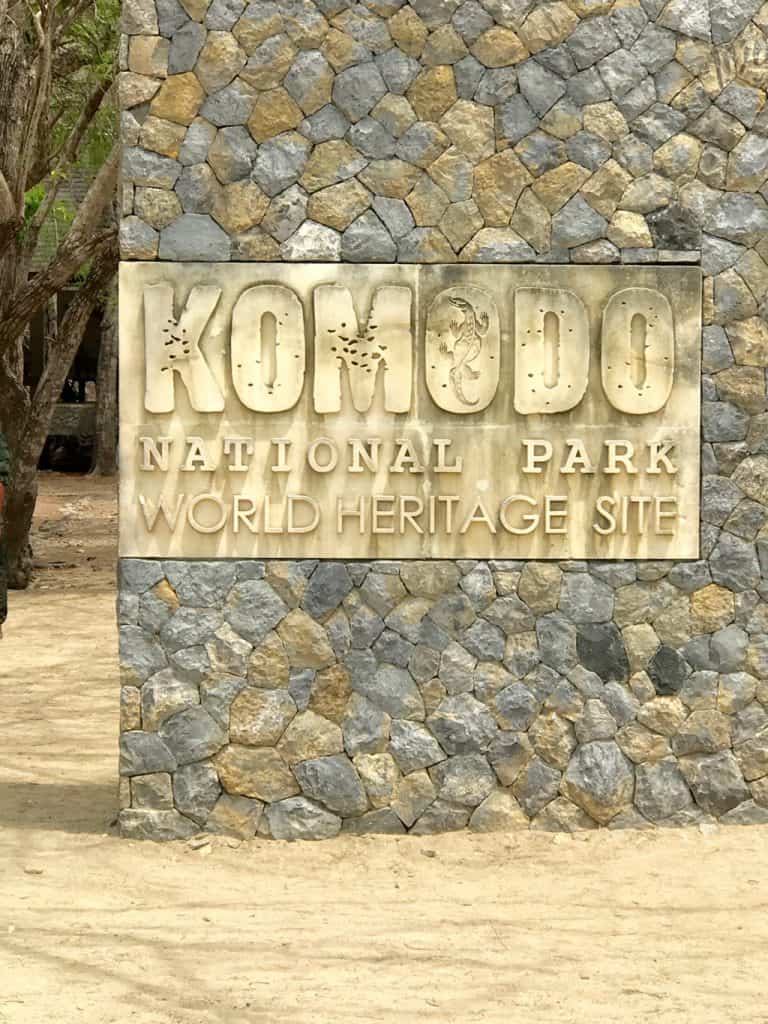 This is a list created by people from all over the globe! More than 100 million votes determined which top 7 places around the world had the best of Mother Nature’s treasures, and guess who made the list!? Komodo Island!. The hot and dry climate of the Komodo National Park makes it the perfect destination for visitors throughout the year and the famous Komodo dragon.

The second-best tourist attraction of this island is the Pink Beach. This beach gets its name from the sparkling pink sand. If you prefer to go on a hike during your visit, then climbing Satalibo is the best form of exercise. This mountain is the highest in Komodo at over 2,400 ft. above sea level. Scuba diving with the manta rays is one of the exciting things to do during your visit to Komodo. You can also see spectacular coral reefs, fish, and turtles during your diving experience.

For all you romance lovers, the Cunca Waterfall is the perfect place to bring your significant other. Although this waterfall is located near Labuan Bajo, you should still take the chance to see it. Stargazing in the middle of thousands of islands seems like the perfect way to spend every night. Don’t forget to wish upon a star while staring at a starry night in Komodo.

Komodo Island is a great place for adventurous people to have a blast! Here are some helpful tips to keep in mind when traveling to Komodo and Komodo National Park! 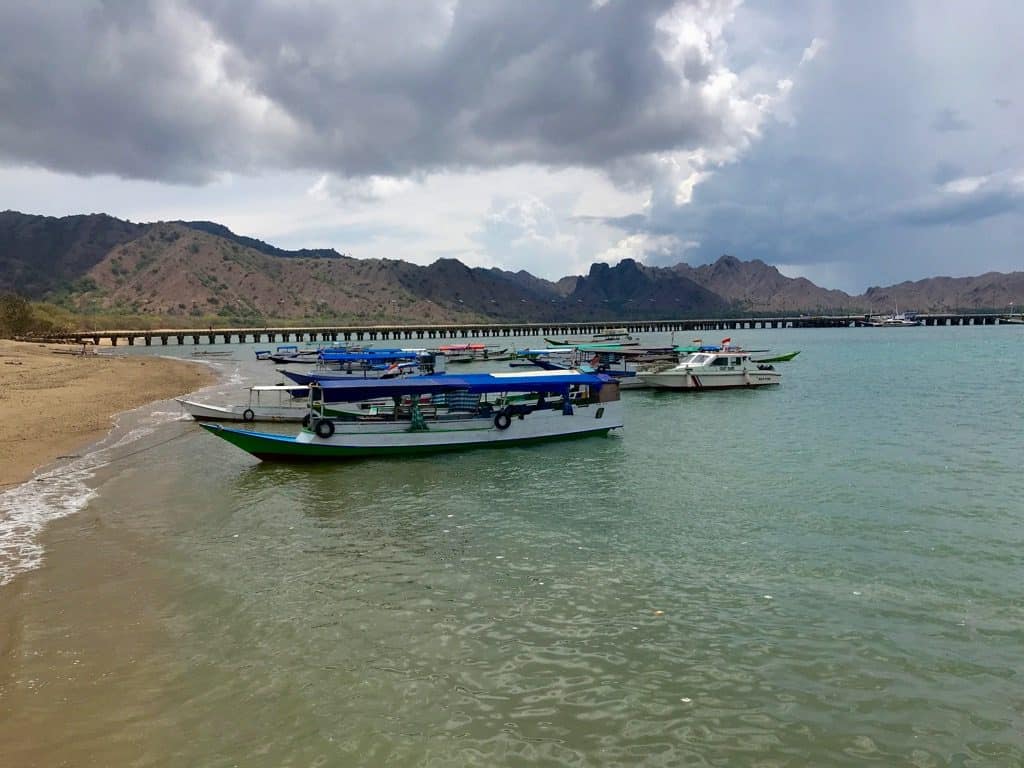 The most important thing to remember is that Komodo dragons can be dangerous to humans. Komodo dragons are amazing swimmers, so if you are swimming at Pink Beach, be aware of your surroundings. With all that being said, there is no reason to stay away from visiting Komodo Island. A trip to this island is worth it and a once in a lifetime trip! Not many people can say they have had the chance to see a real-life dragon in person! Embrace life and the beauty that is Komodo Island, Indonesia. 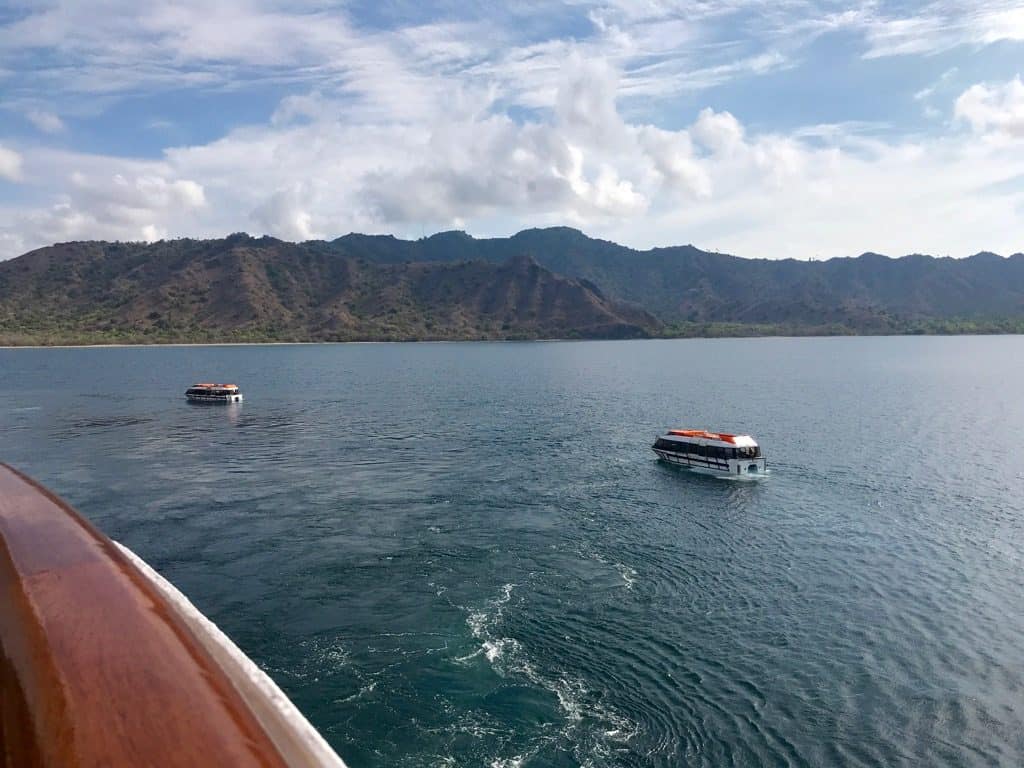 A trip to the island of Komodo is worth it and a once in a lifetime trip! Not many people can say they have had the chance to see a real-life dragon in person! Embrace life and the beauty that is Komodo Island, Indonesia. And If you are brave enough to visit the Komodo dragon Island, then you will have pictures of the Komodo dragon to accompany your vivid experience!

Disclosure:  As is common in the travel industry, Dr. Maloney was provided with accommodations, meals, and other compensation for the purposes of review by Holland America. While it has not influenced her review, PointsandTravel.com believes in full disclosure of all potential conflicts of interest. All Photos by the author. There may be affiliate links in this article.