Color and Style – What to Do in Helsinki Finland

What a whirlwind trip I had to Helsinki, which is also a world away.  I suddenly got transplanted into a winter wonderland from the heat of the desert! 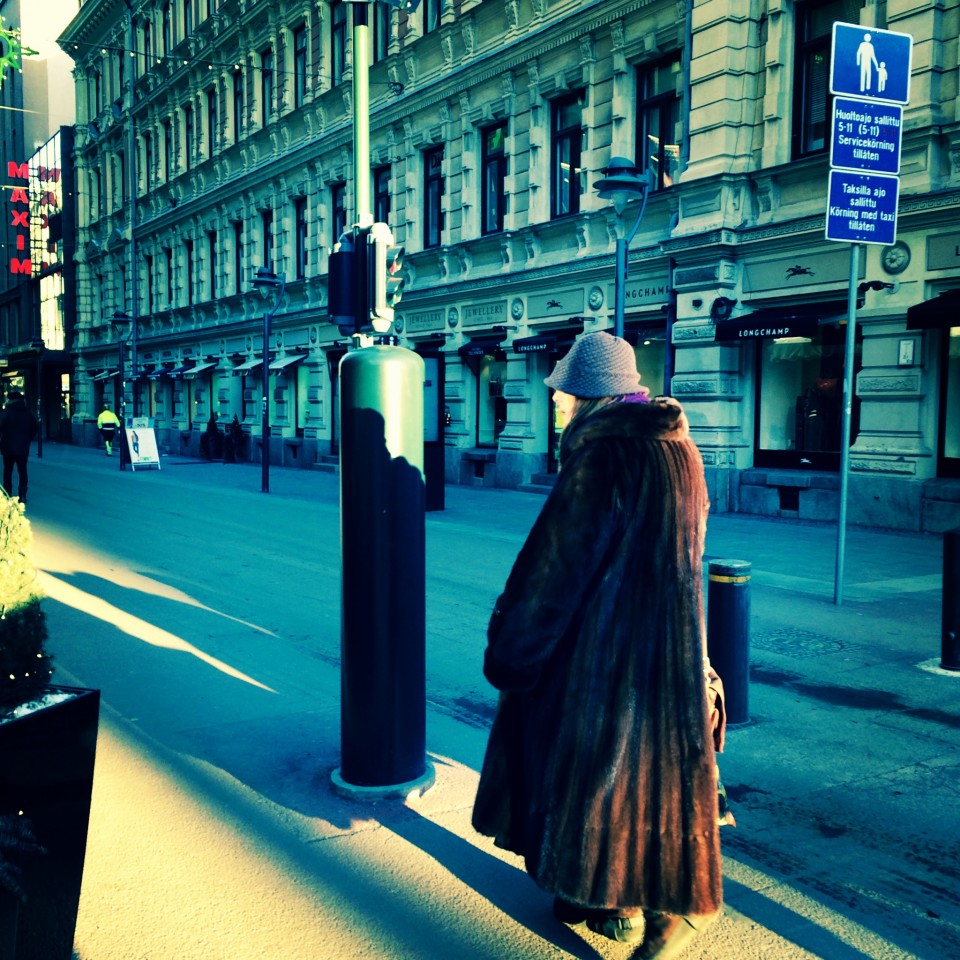 One huge selling point of Helsinki, Finland is the fact that it is close to other major cities and so Helsinki is like getting 2 for 1 when it comes to a vacation city!  You can take the Eckero ferry to Tallinn, Estonia for a day trip (or a few days).  Apparently this is very common amongst the Fins, as the prices are so much better in Estonia.

I loved Tallinn so much, that it will get its very own romantic style post about what a great city it is.  You can also get over to Stockholm quite easy as well.  As a traveler, I love this concept, as two cities close in proximity make for a great week-long vacation.  As I think 3 days in any city is usually long enough for a vacation since you enjoy the highlights and also spend about the right dollar amount for the entire vacation.  This is a “value luxury ” concept that I have been doing for years and it works for me. 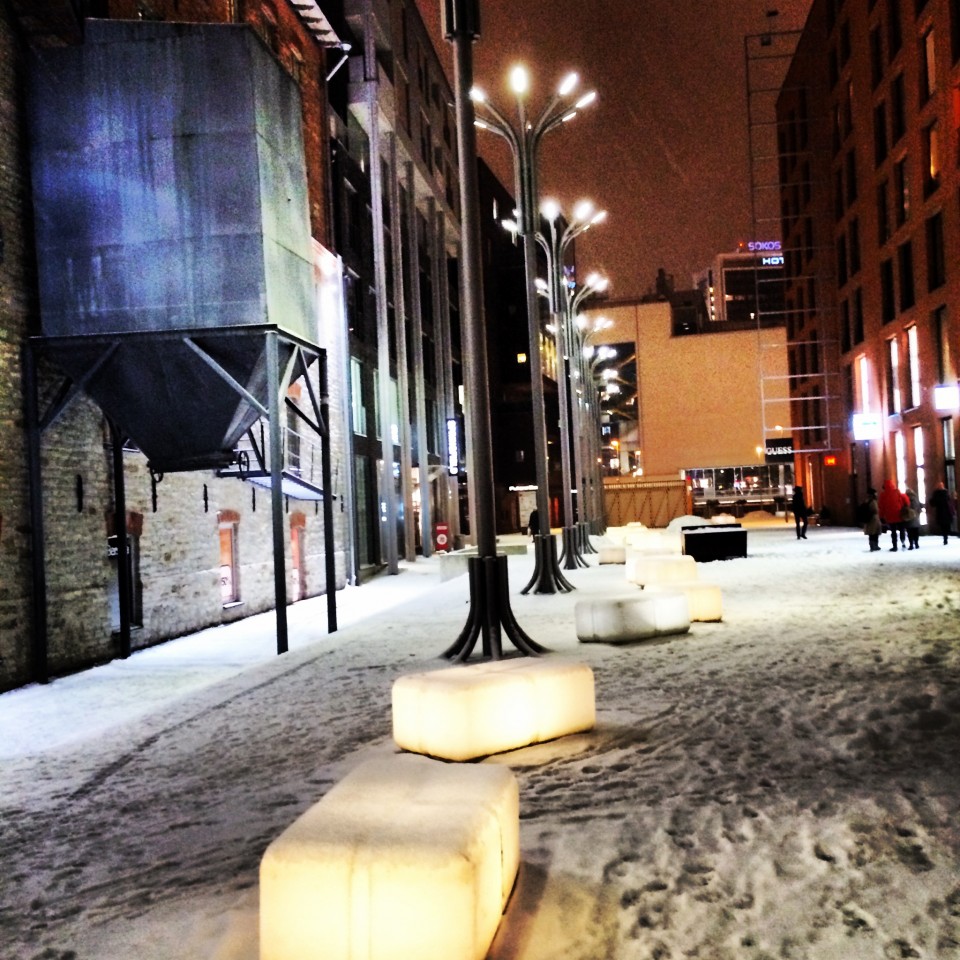 Upon my arrival into Helsinki, I went straight to the Scandic Paasi Hotel, where, I have to say, I was impressed with the hotel brand and specifically this hotel. It is a very comfortable hotel with a social edge, which made it great since I was going to be here with a group of international travel writers/bloggers and photographers. 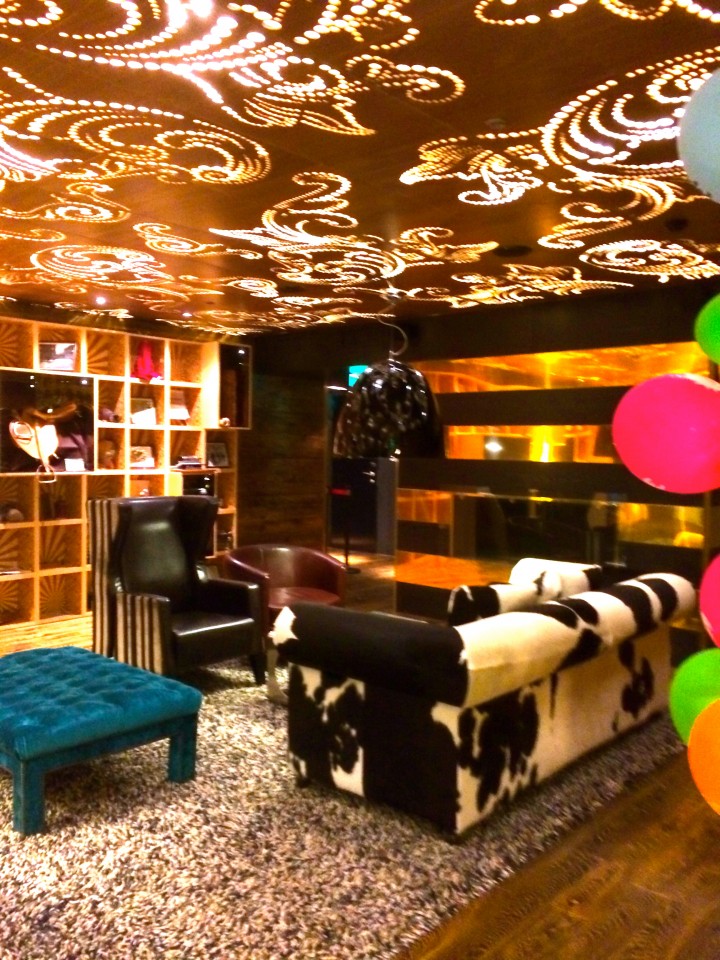 The rooms start at 79 euros and the average is 100 euros per night, which is a bargain, as this is a Scandinavian country and they are known worldwide to be expensive!  So this was a pleasant surprise or “a breath of fresh cold air”! 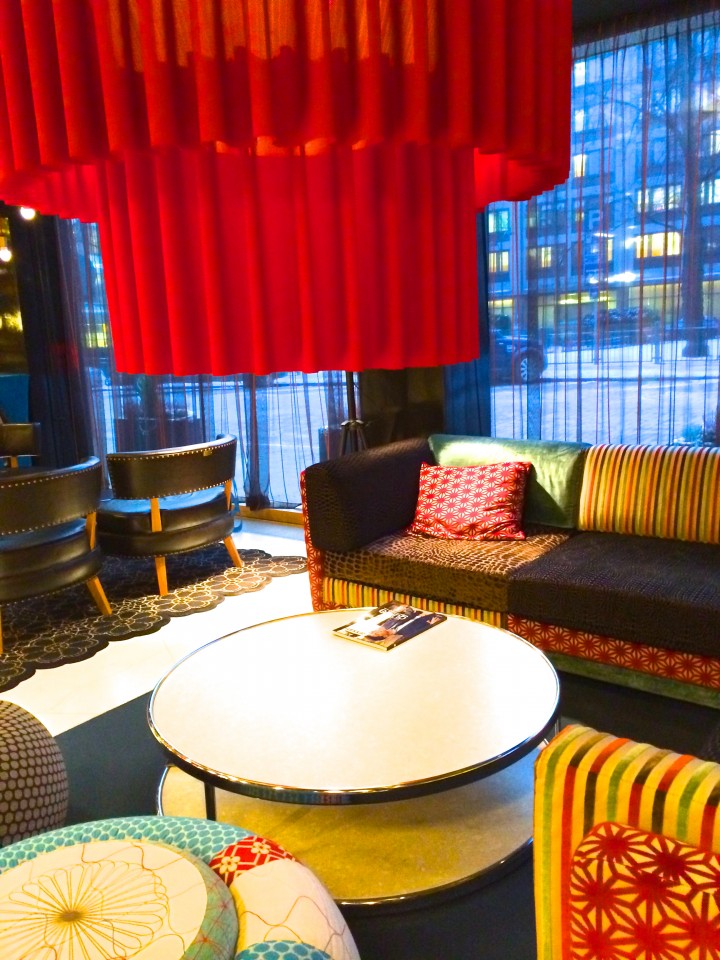 Scandic Paasi Hotel has a central location next to the sea in the Siltasaari neighborhood and is good walking distance to the tram, which I rode quite often.  The hotel also has great accessibility for the handicapped, which is well known throughout the entire chain of hotels. 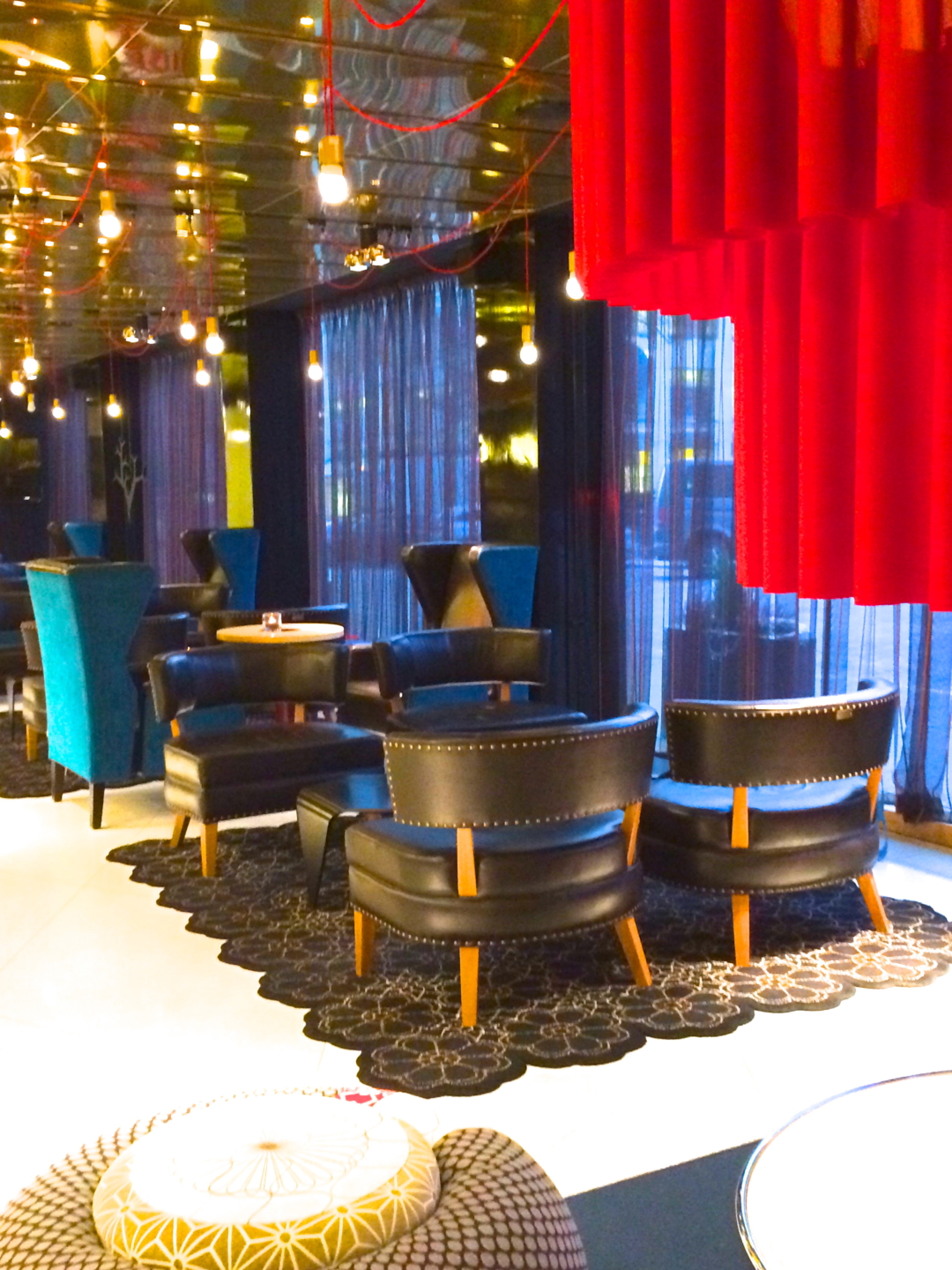 Check them out, the next time you are in Europe and in need of a hipster, cool place to stay.  To me, they seem akin to the Aloft or W brand of SPG properties, which I am more accustomed to staying in.  They do have a loyalty program, which I did not get a chance to check out, but I will join when I get a chance. 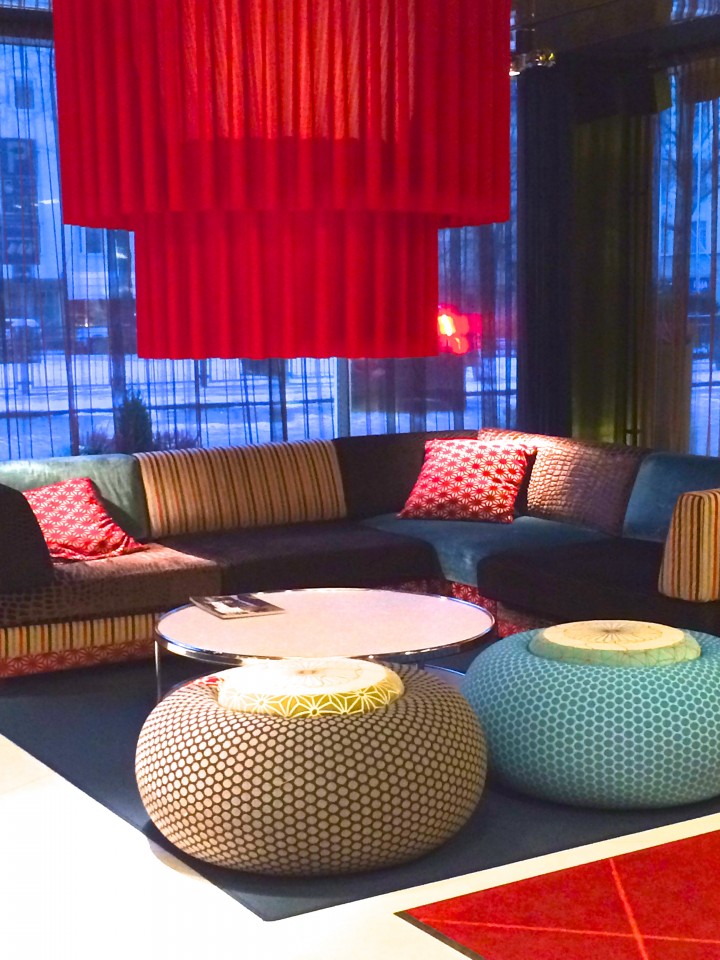 One thing I immediately noticed upon arrival in Helsinki was how Scandinavian design has spread throughout the city with a lot of design workshops and galleries.  In 2012, it was featured as the World Design Capital by the ICSID (International Council of Societies of Industrial Design). All the small cafes and restaurants are of a minimalist design, which tends to be hip, trendy, and cozy places.

They also have very hipster-like museums of contemporary art located in unique and curved buildings. I had a chance to visit several design houses, such as Iittala, which is probably the most well-known glass and ceramic Finnish brand. In fact, while there, they mentioned that probably every Fin has one of their pieces or receives one of their pieces for graduation, weddings, birthdays, etc. 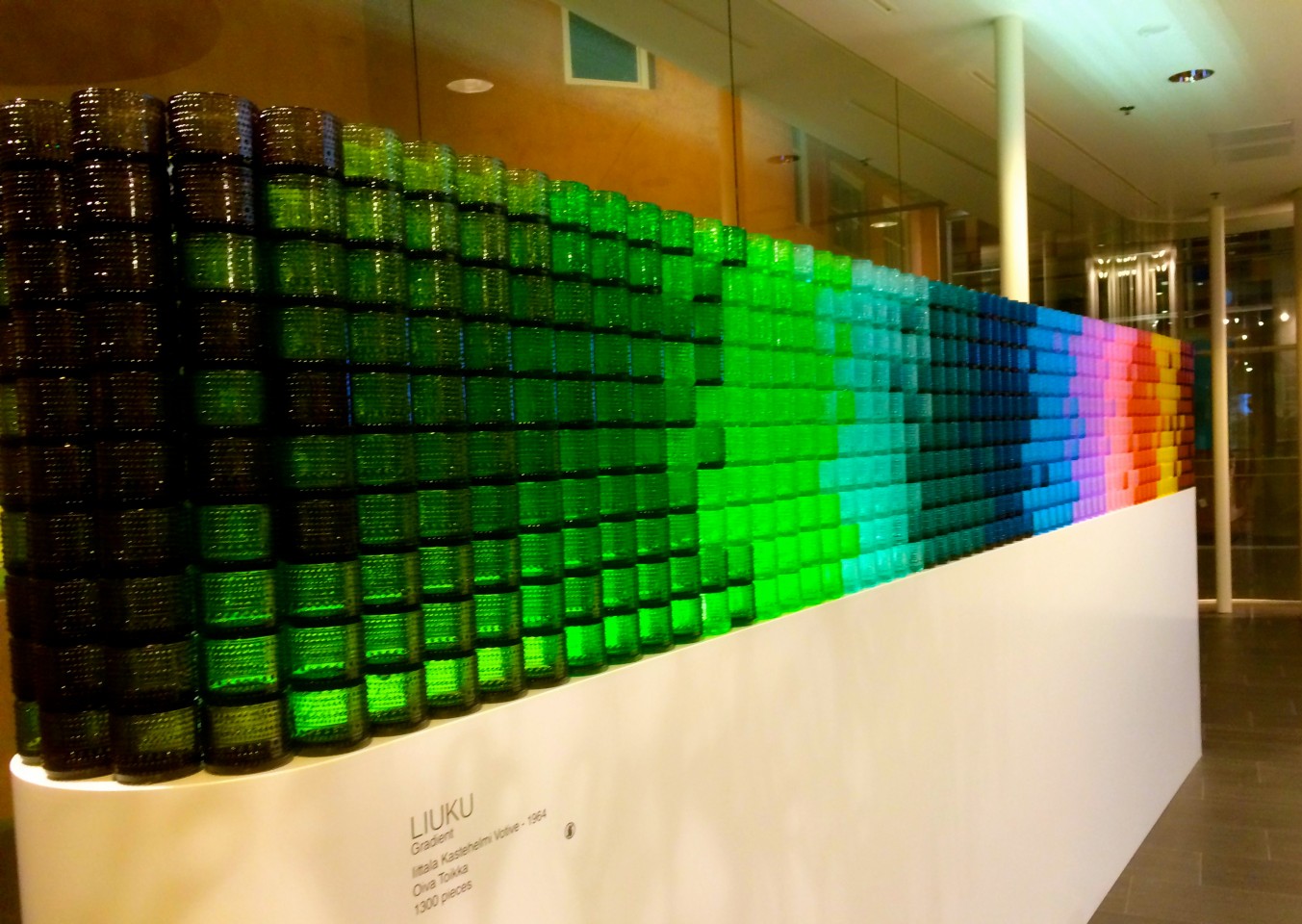 They also have the Fiskars brand, which you probably didn’t even know was Finnish, but it is the famous orange handled scissors.  I have several pairs at my office and at my home. 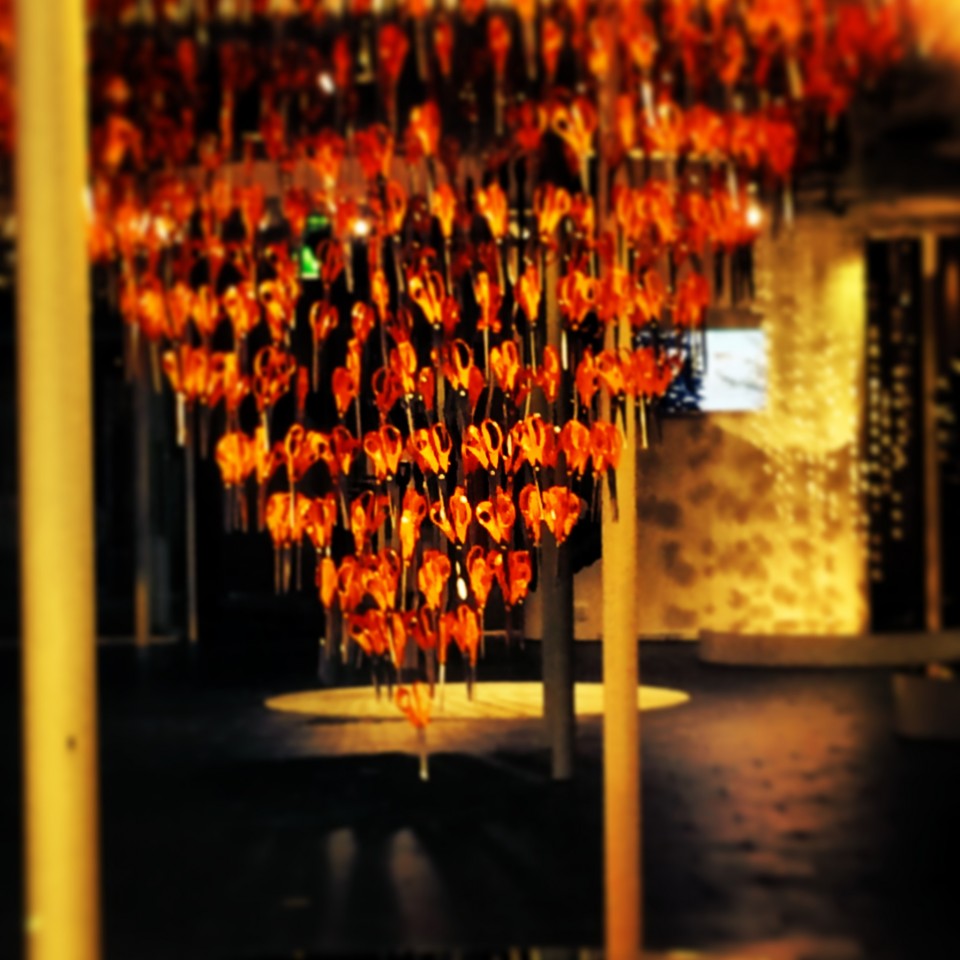 As far as designers, Marimekko is also very popular.  It is particularly noted for brightly colored, printed fabrics and simple styles, used both in women’s garments and in home furnishings. 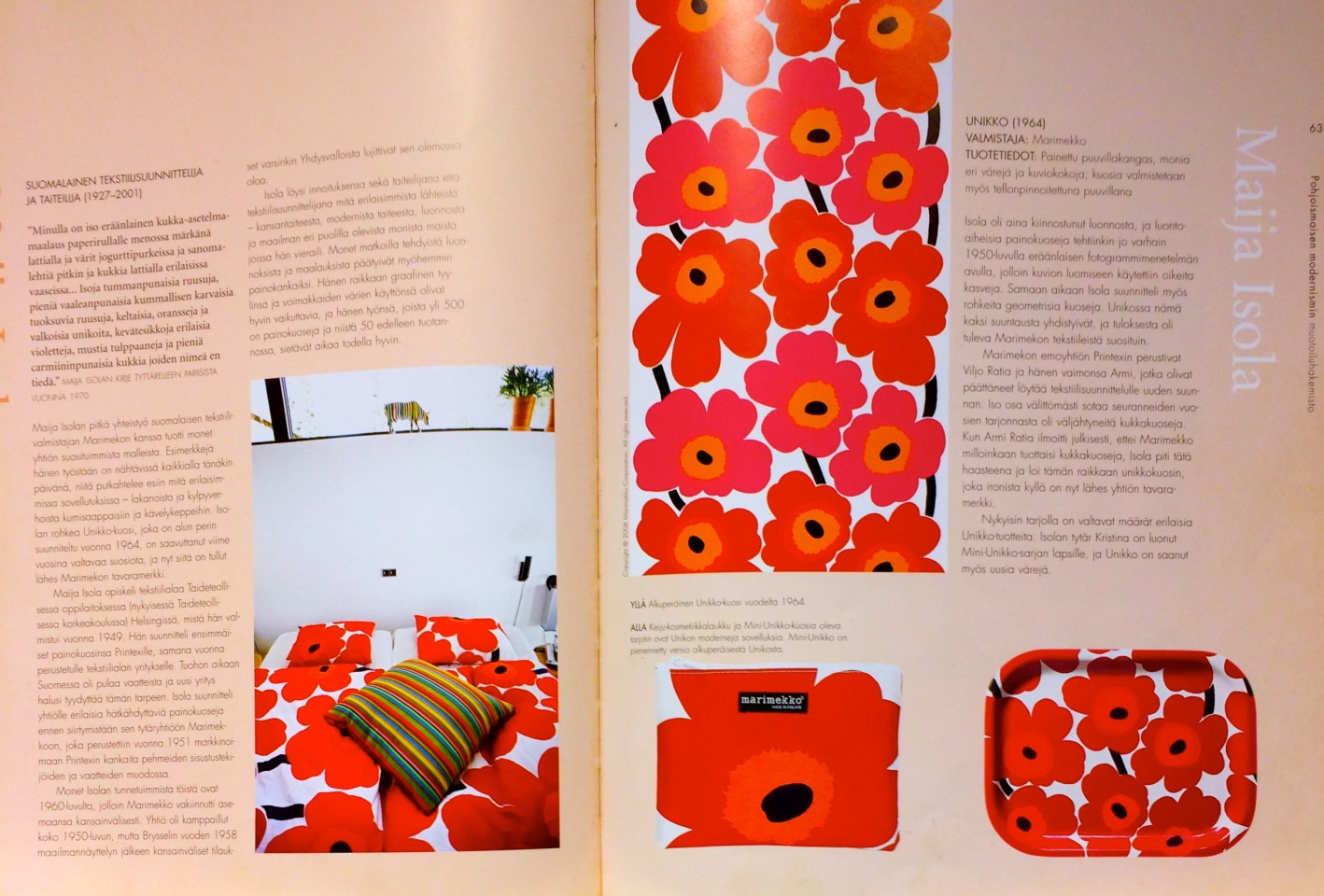 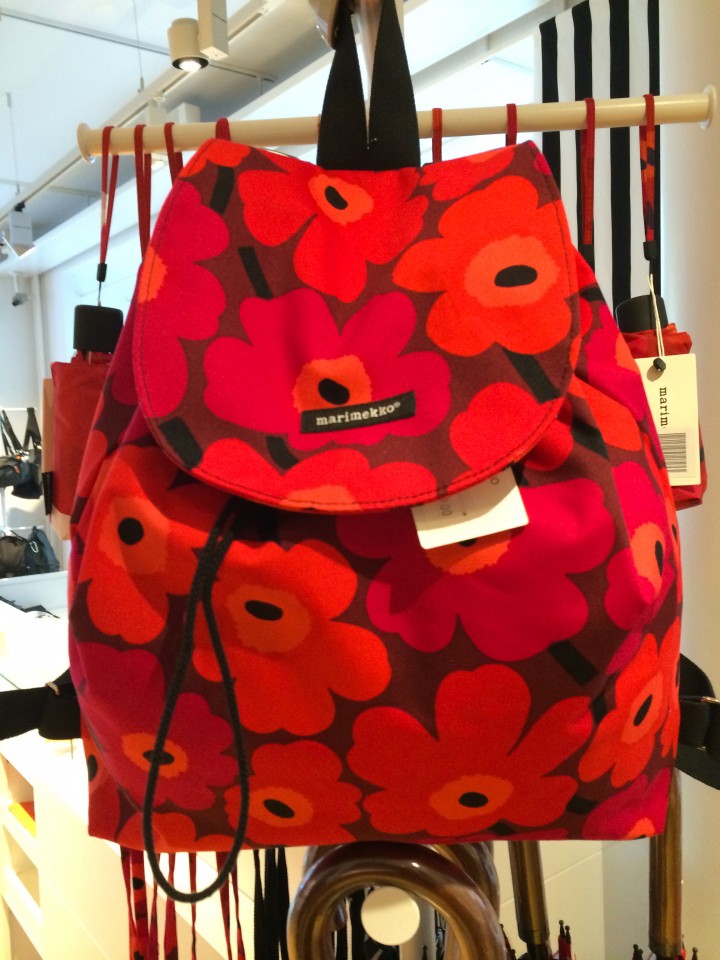 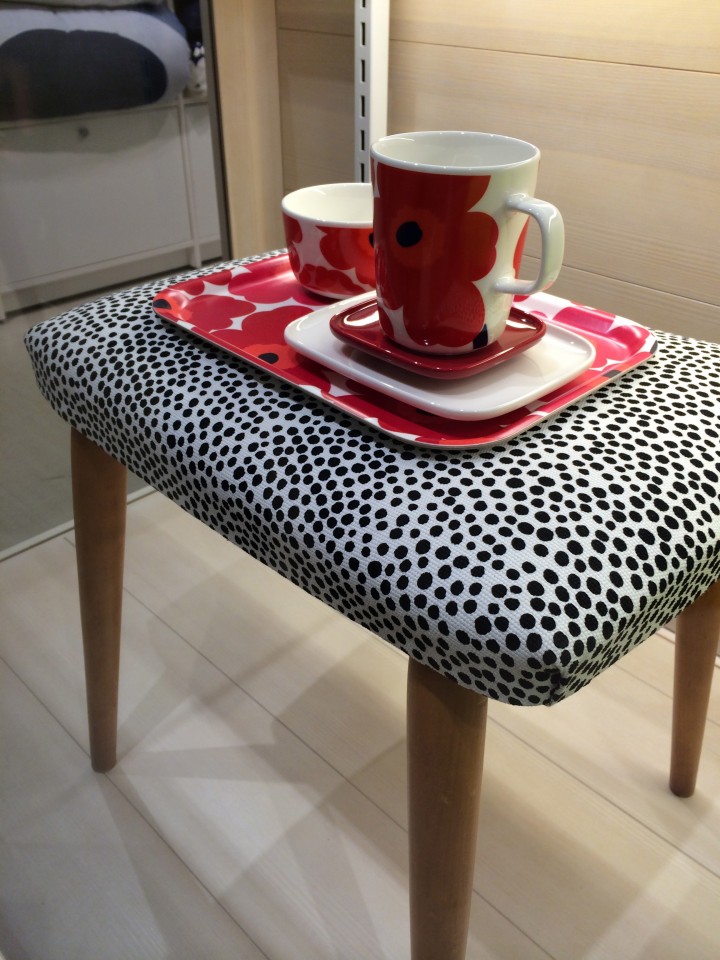 I was surprised that even I knew the brand since I am more into Old World design than contemporary design.  Funny thing is, when I was younger, I purchased a set of dishes with glasses that were from this very company.  All along, I thought they were from a Japanese designer. 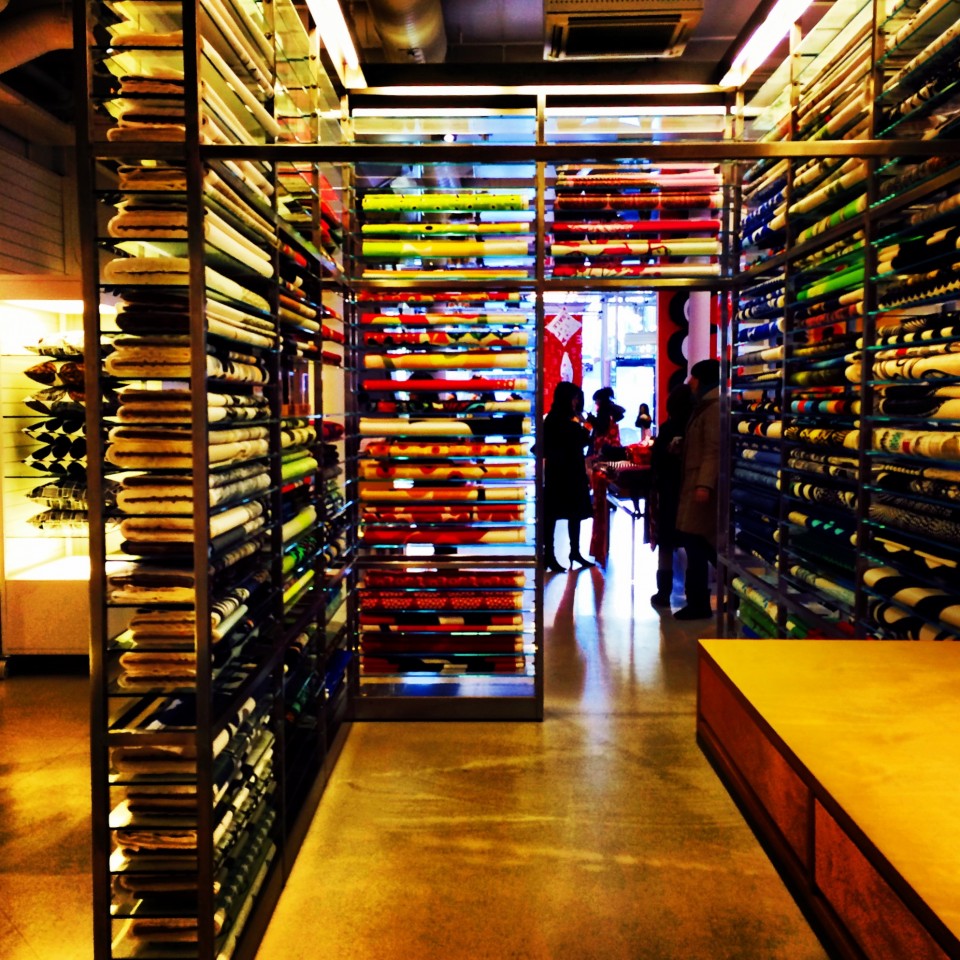 One of the lifestyle bloggers who is Finnish told me that nothing could be more Finnish that this brand!  I had no idea. I still have the dishes after all these years and now this year, Marimekko is celebrating their 50th anniversary. 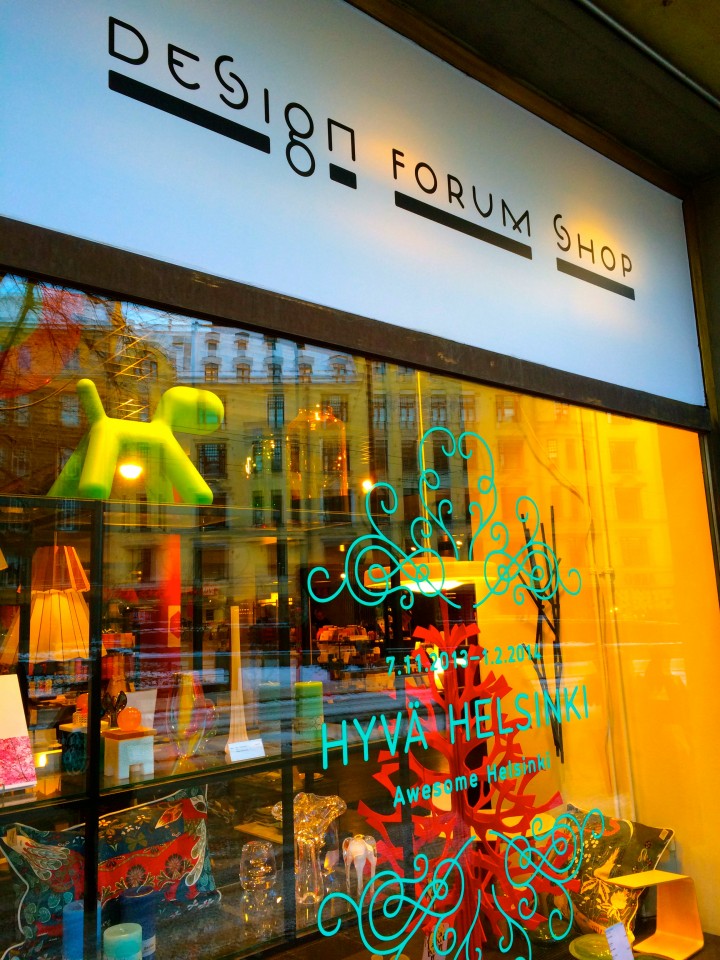 Another stop I made along the way was to the Design District Society of Helsinki, which is a gallery where they showcase the up and coming designers.  You can go to their showroom to purchase products, plus they have a map which shows you where a lot of the designers are in the neighborhood, where you can walk around and visit their stores as well. 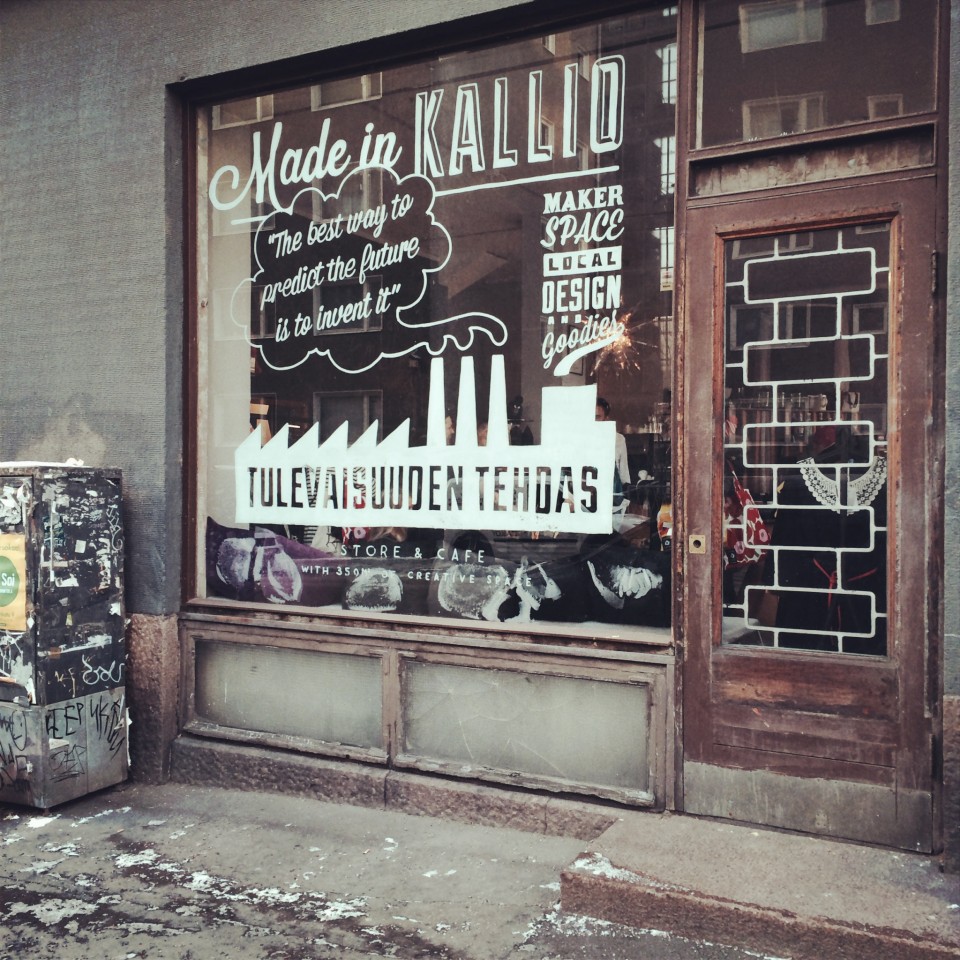 I also took a tour to El Kallio district, which is known as the Red Light District in Helsinki to a place called “Made in Kallio”, it looks like a café, but tucked in behind it, in the connecting rooms they have a filmmaker, a photographer, a shoe maker, a carpenter, a smoothie maker, designers, etc.

It is a place where these artsy and creative people can set up their shop and utilize each others resources and have their ideas spark off of each other.  It is owned by a hipster couple, where he was a Hollywood film maker, and native Fin, who decided to come back to Helsinki to help refurbish the neighborhood, and yet give artists a place to gather and do their work, without having to worry so much about the overhead. 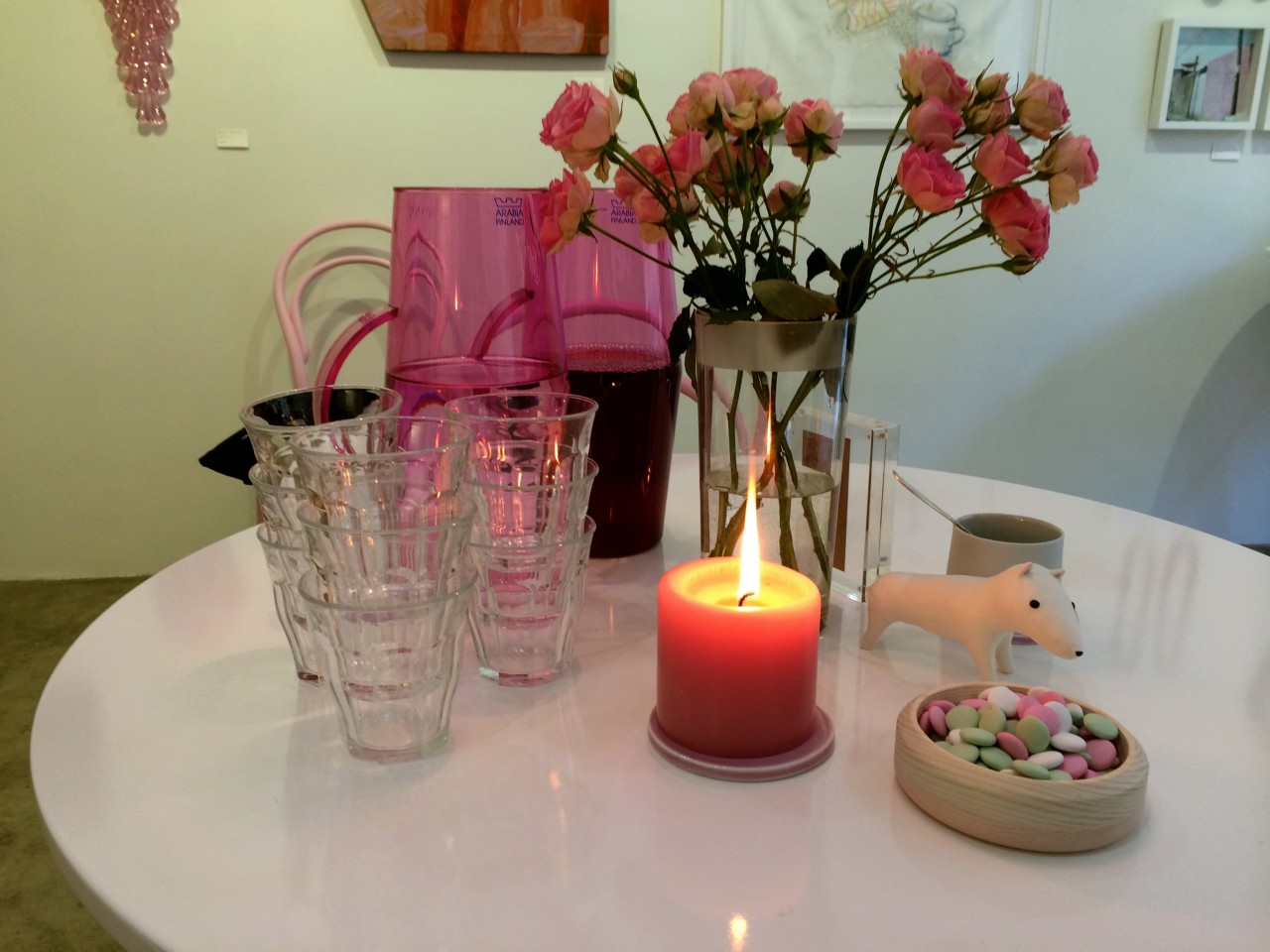 One cute little shop we came across on Annankatu Street was called Lokal, which was basically like a cross between an artist gallery and a quick coffee shop. 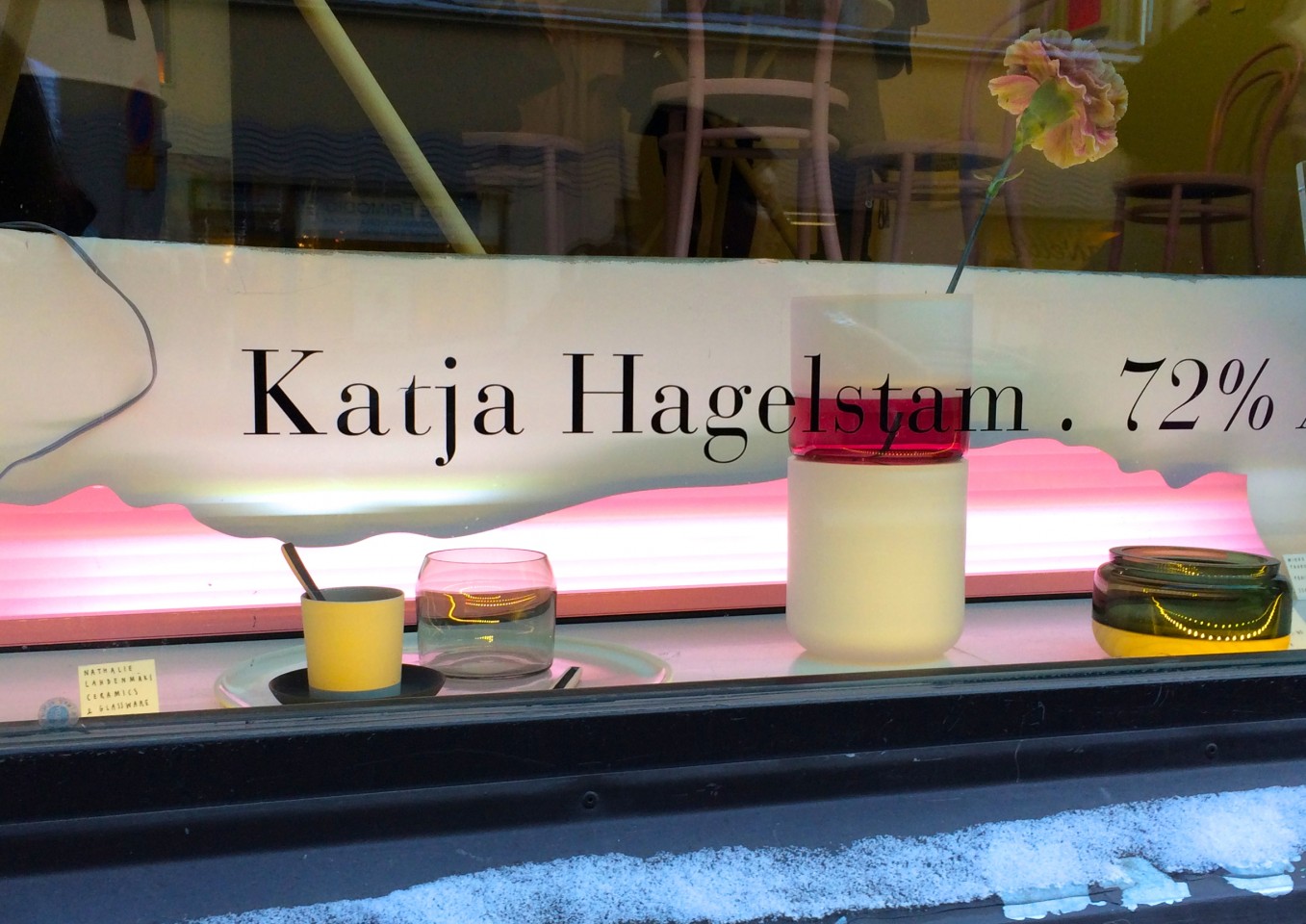 The window states “72% art, 28% coffee”! The owner is a photographer Katja Hagelstam, who runs the gallery by herself and has created a cozy place where you can enjoy art, coffee, and cake. The cake, made by her, changes on a daily basis and she makes the coffee in an open kitchen in front of the customers while she talks about the gallery and the artists whom she features there.  It is a very nouveau concept to showcase art with food and drink. 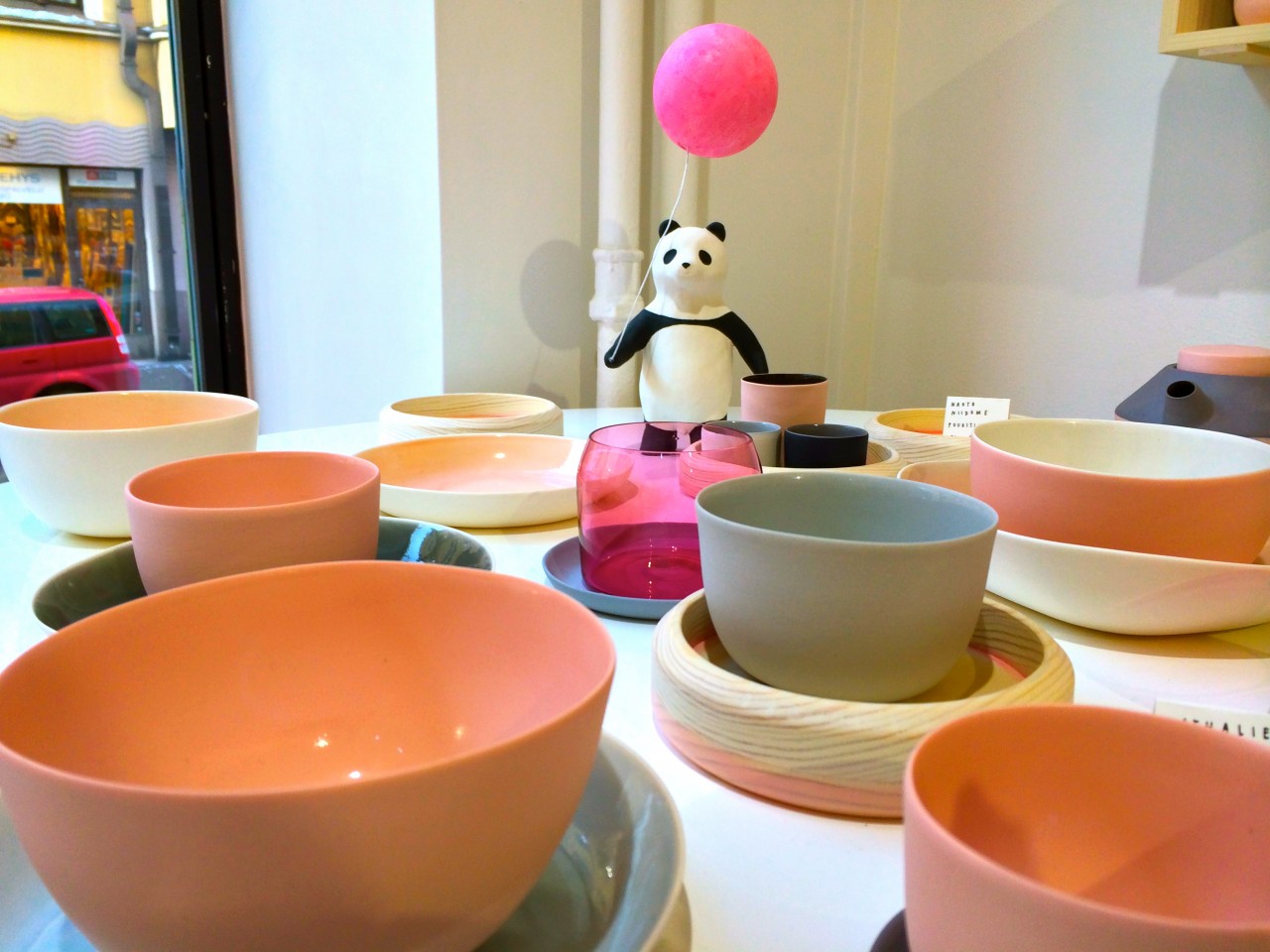 I also had a chance to dine at a fabulous renovated restaurant that was once an old bank.  They are doing such a great job at renovations and creating wonderful neighborhoods in areas that were once upscale and had gone down or were abandoned.  This particular restaurant, Salutorget, has a spectacular interior stained glass window with the bathroom being the bank’s vault! 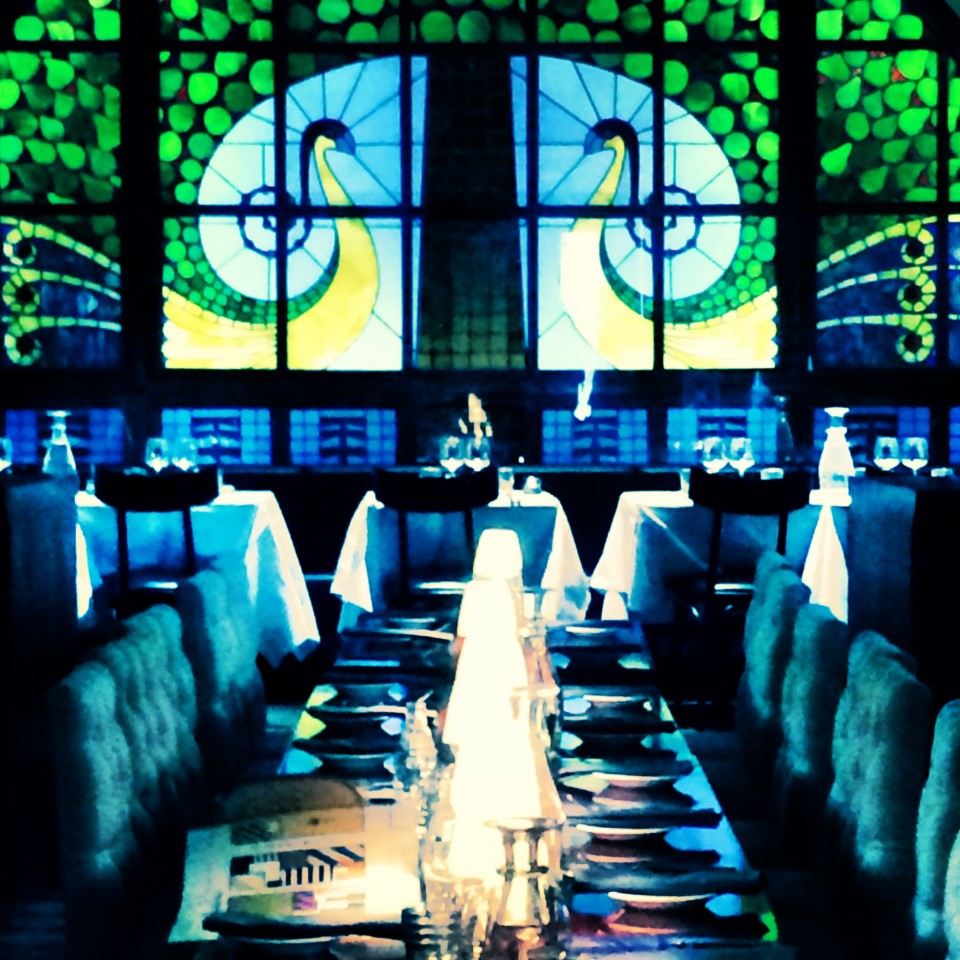 While here, I had the opportunity to try one of the most traditional food items in Finland, which is the Blini, which is a small pancake made of buckwheat flour.  This one was served with the traditional condiments and choice of: Whitefish roe (fish eggs), onion and sour cream Vendace roe (fish eggs), onion and sour cream Skagen (shrimp) tartar Smoked reindeer mousse and karpalocoulista Horseradish Mushroom Salad,

When I was there, I had no idea what I was eating, but had to later go home and look it up, so that I could appreciate each bite! 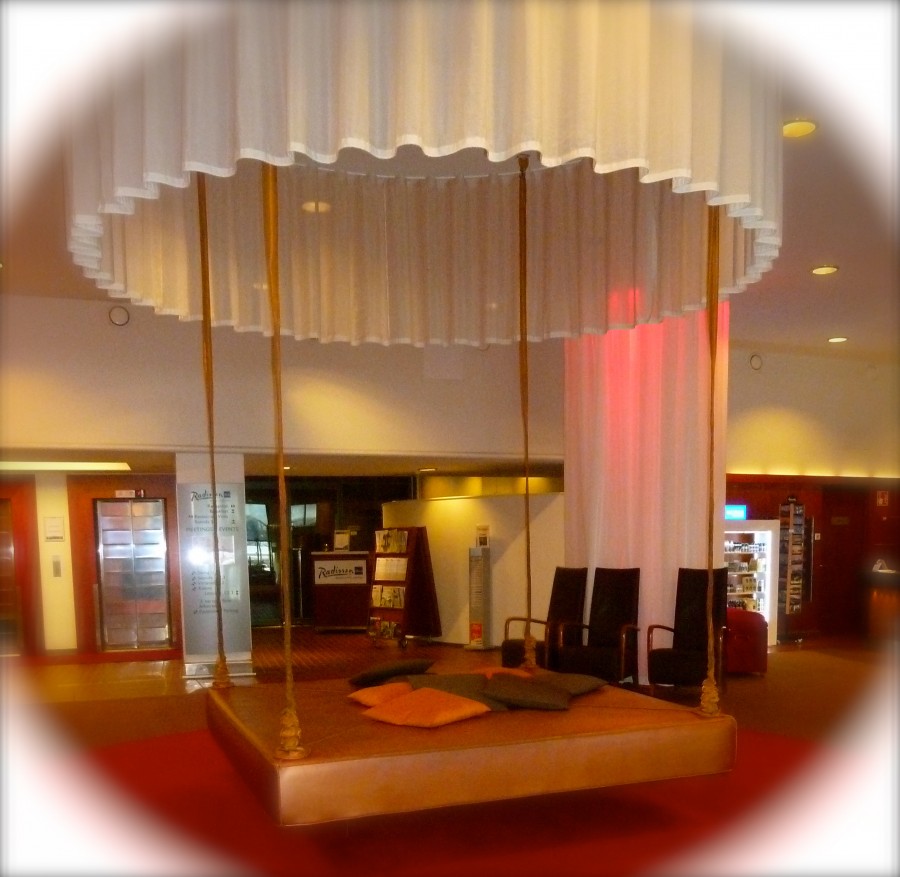 While in Helsinki, I also had a chance to stay and visit two other hotel brands that I have grown very fond of Radisson Blu!  I stayed at the Radisson Blu Seaside and had dinner and toured the Radisson Blu Plaza Hotel. You may recall that I am fond of their Club Carlson loyalty program and am hoping they will run another great promotion this year.  I cannot say enough about how great his brand is and how good their promos are.

So overall, I had an enjoyable, quick trip to Finland and Estonia!

Disclosure:  My trip to Finland and Estonia was in conjunction with #nbeFinland (Nordic Blogger Experience), as I was an official international blogger for this group.  It was sponsored by VisitFinland, VisitHelsinki, and VisitEstonia.  This in no way interferes with the fact that I had a great time in these wonderful countries.