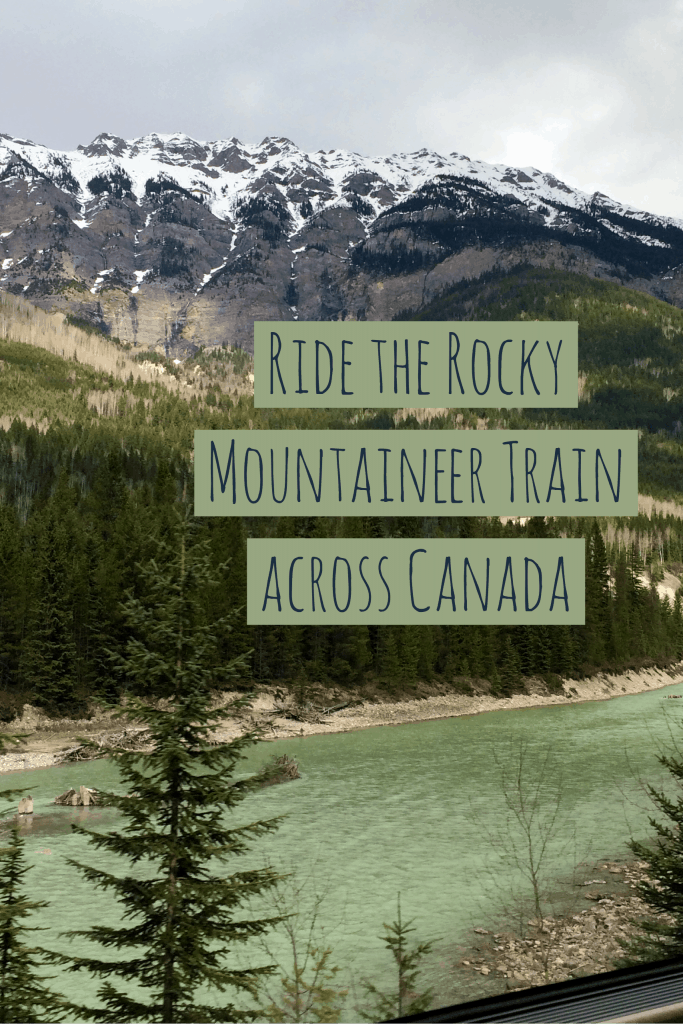 Quietly, I sat alone in the brightly-lit train station waiting to board the Rocky Mountaineer Train. I had arrived too early and had plenty of time to wait. Slowly, I put my head back and with my eyes closed, I imagined the majestic train rolling into the station.

Train travel had always been fascinating to me and this was my chance to ride on a luxury train. I envisioned the clanging noise of the bells, as it signaled the trains’ arrival. I nodded off to sleep when the real sounds of the train started to come within hearing distance. I couldn’t tell if it was in my dream or reality when suddenly I was startled. 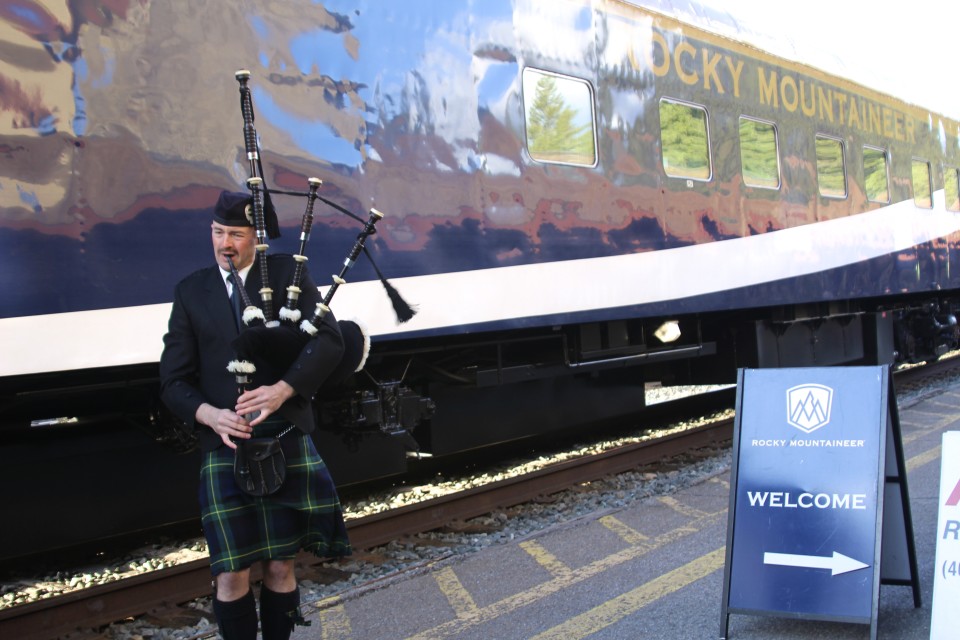 I heard the loud rumbling noises of the massive blue and gold tube of metal rolling into the train station. I sensed an exciting ripple effect among the now-crowded waiting hall as the massive Rocky Mountaineer Train slid in majestically. The excitement had begun, as it slowly came into view in front of the massive floor-to-ceiling glass walls of the hall.

This place was buzzing with enthusiasm and eagerness as the conductor chose one lucky rider to pump the billows that blew the “All Aboard” signal. Then the ceremonial bagpipes begin to play as I searched for my ticket to determine my train number and seat… My train travel trip of a lifetime had begun. 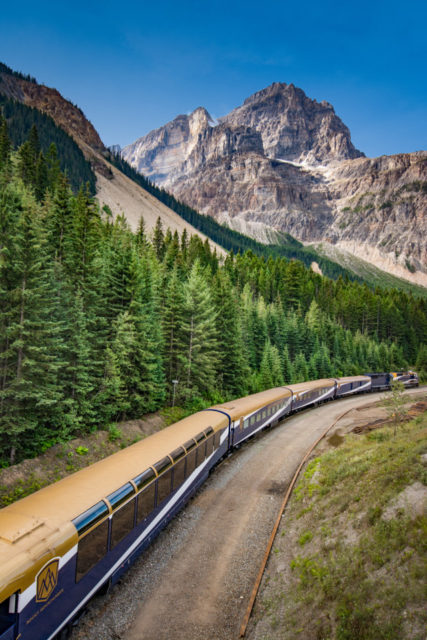 It would be a two-day train journey from the gorgeous city of Vancouver to the equally gorgeous town of Banff to the Banff National Park, one of Canada’s best national parks. With its starting point in the gorgeous British Columbia, it winds its way thru the Canadian Rockies by rail with an overnight in the cowboy town of Kamloops and then on to Banff. 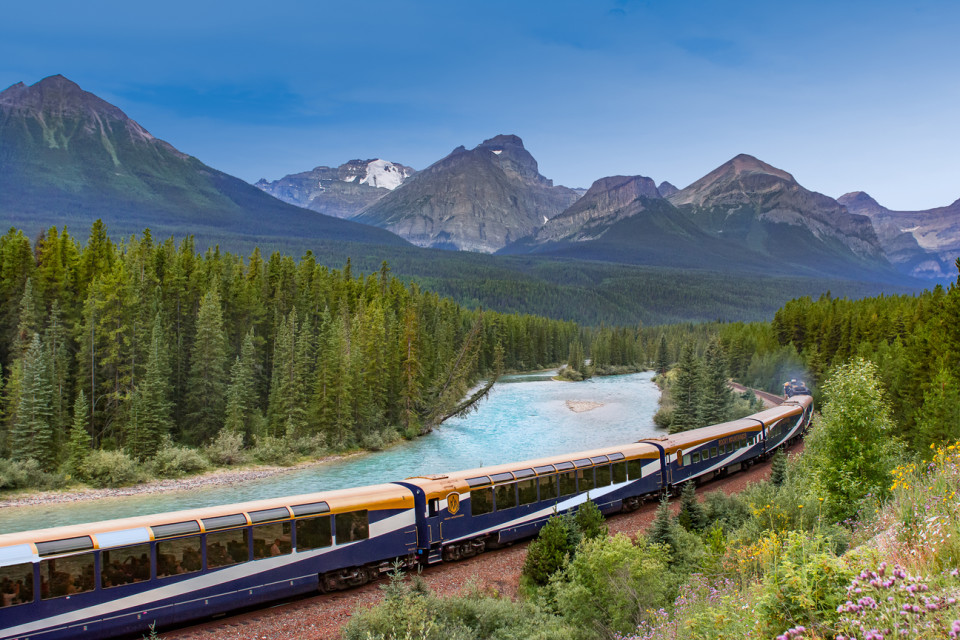 For my chosen route of train travel, we will go from a city (Vancouver) into the rainforest, then to the snow-capped Rocky Mountains and then to an arid desert plateau and then on day two, we go back into the mountains climbing upwards as the weather becomes much cooler. It is quite a journey through many climate zones, so if you choose this route, layer your clothing, and bring a sweater for this train travel. 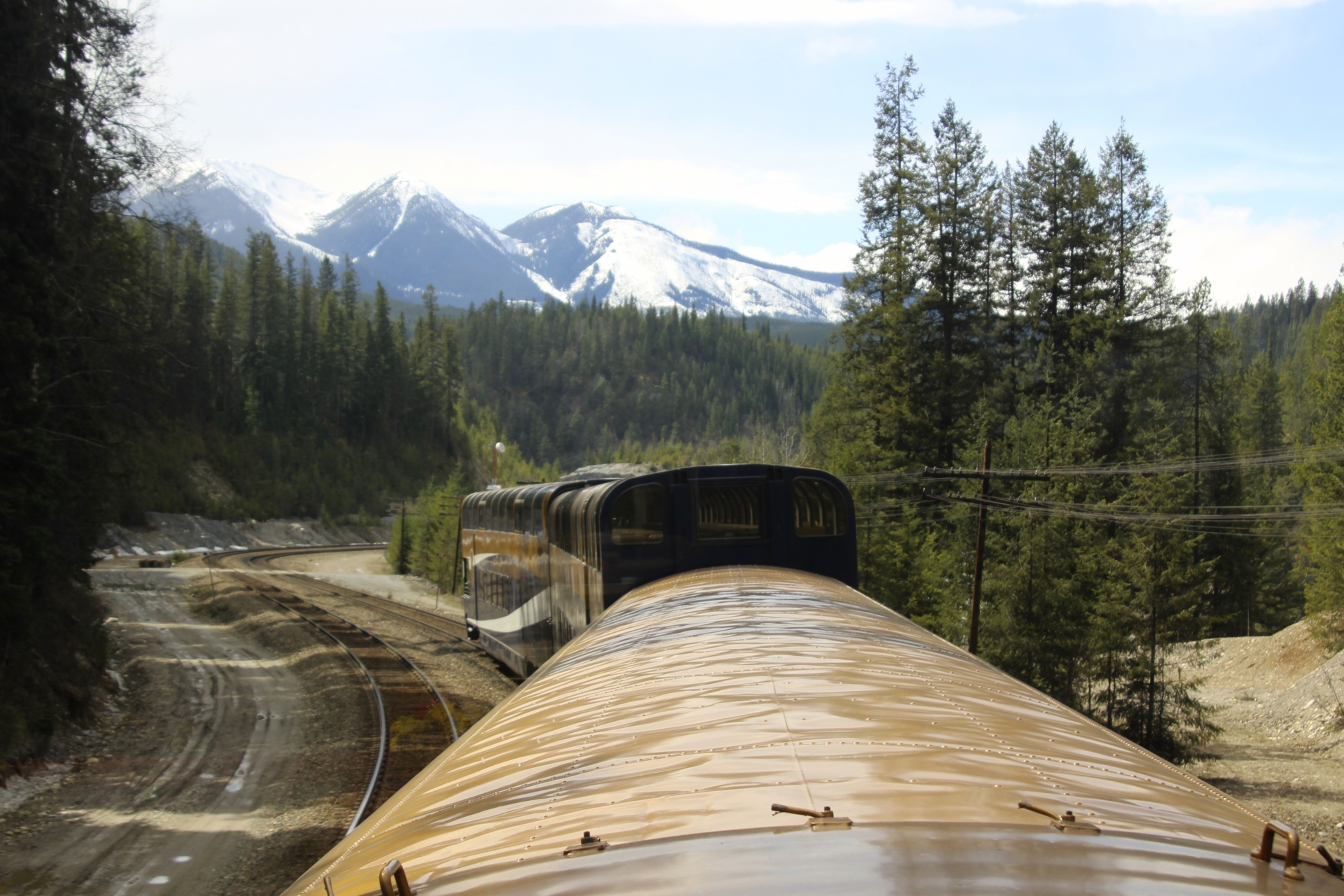 The photo was taken by Dr. Cacinda Maloney 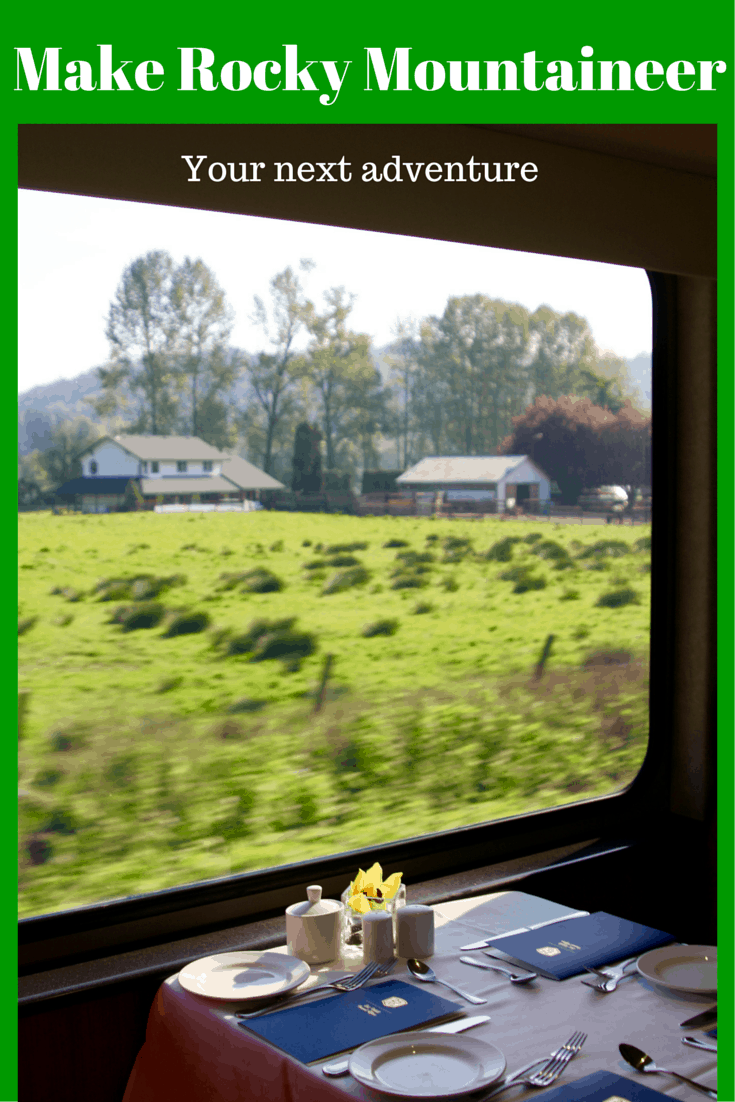 I had spent a wonderful few extra nights at the Fairmont Hotel in downtown Vancouver before heading out and was ready to enjoy the first-class scenery, service, and meals promised by the President and CEO himself, Randy Powell.

Known as “The best train experience in the world.” By the Society of American Travel Writers (SATW) and “One of the world’s greatest trips” by National Geographic, it comes with a hand full of accolades and I was ready to get this party started.

Rocky Mountaineer Train: All Aboard

Once onboard, we waved goodbye and screeched towards the outskirts of Vancouver. As we crossed the Fraser Swing Bridge, we begin our ascent to the spectacular Coast Mountains. At this point, I am already hungry for breakfast. This was when I found out that the Michelin-accredited chef onboard has a staff of over 80 culinary trained workers helping him prepare meals for all classes of service on the train. Let me tell you, it doesn’t get much better than lox and caviar on eggs for breakfast! This is a luxury train! 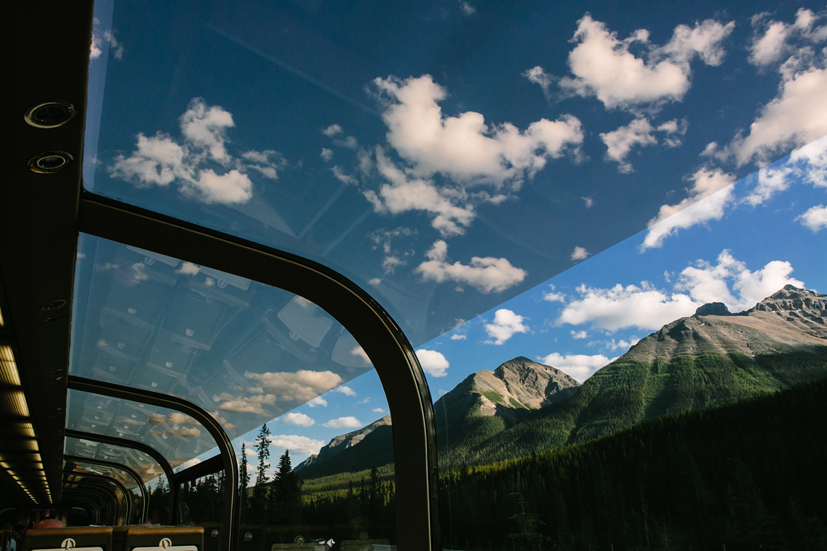 While rolling through Fraser Canyon, we spot Hell’s Gate, a popular tourist attraction, located at the narrowest part of the mighty Fraser River. 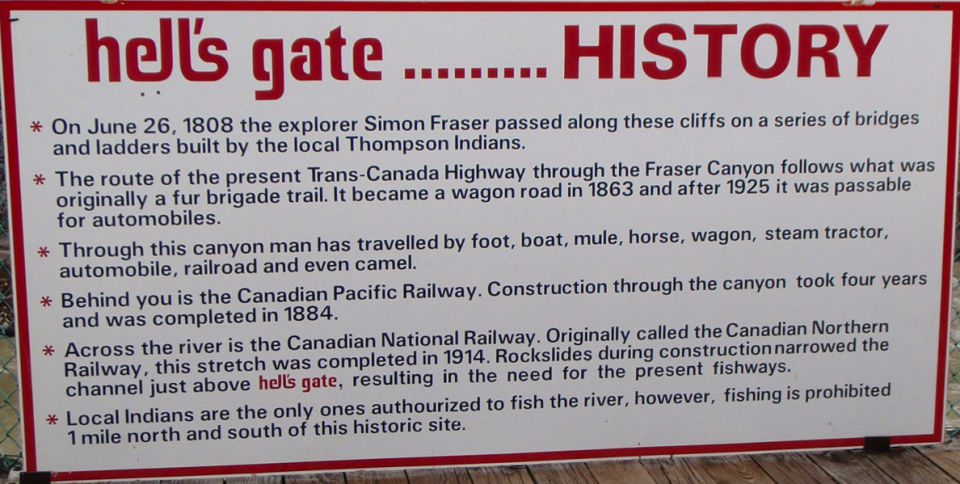 The surrounding cliff walls funnel about 200 million gallons of water through this canyon that is only about 110 feet wide. And this is done every single minute! What an amazing feat! That is twice the volume of water of Niagara Falls! The power of the rapids seen down below is incredible as the rivers come together and it passes through the smallest midpoint. 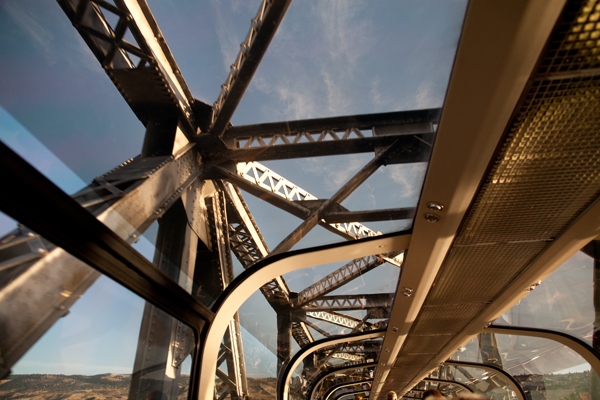 The Rocky Mountaineer Train has many routes, but for my chosen journey, I went from Vancouver to Banff. One of the major highlights from the itinerary of day one was the Cisco Crossing or Cisco Bridges. This is where we saw two bridges crossing the river at the same spot and it is a favorite of photographers where they can get two bridges in one shot (I will try to get the shot next time, as I didn’t know at the time that it was a thing). 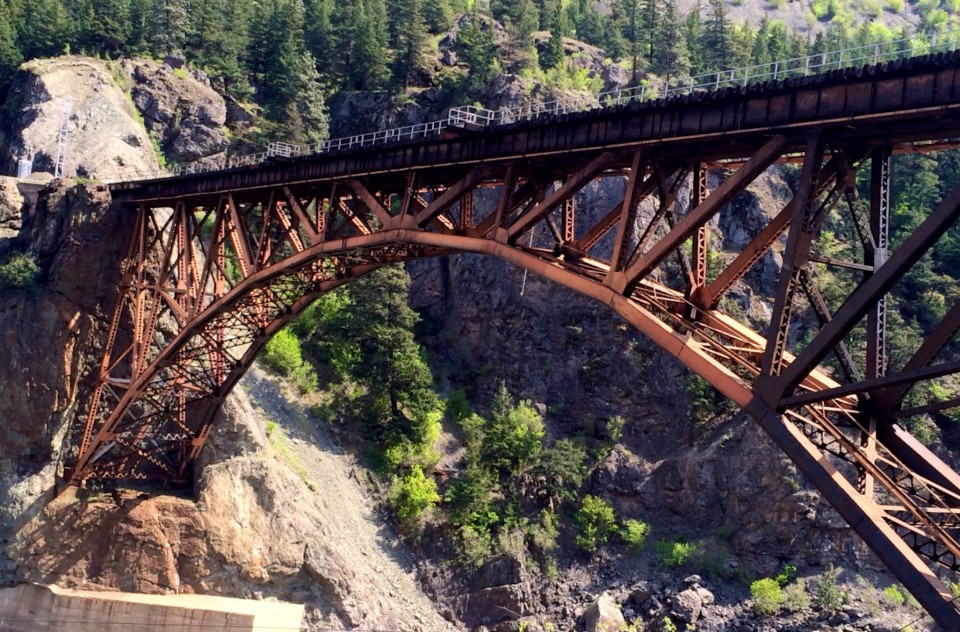 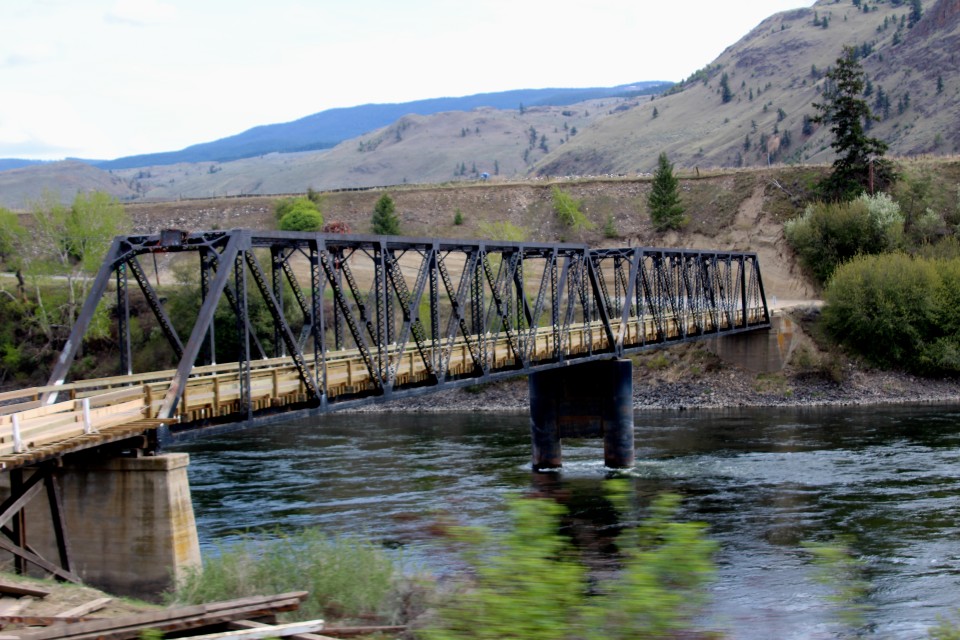 The two bridges are the black Canadian Pacific Railway (CPR) bridge, built in England in the 1880s, and the orange Canadian National Railway (CNR) bridge, which is the largest single-span bridge on the line. It crosses 220 feet above the river. The view is stunning! 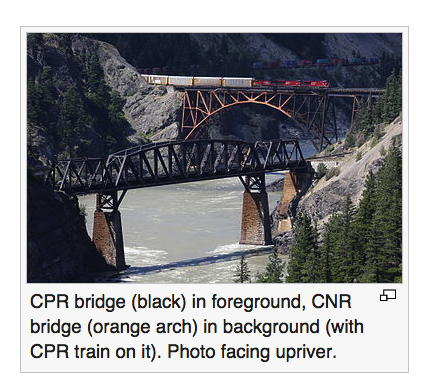 At the confluence of the Fraser and Thompson Rivers, we begin our transition from mountain vistas to the arid interior of the Thompson Plateau. One of our first indicators was the rainbow canyon and avalanche alley.

Rainbow Canyon derived its name from the dramatic array of colors reflected in the rocks. When iron, copper, and sulfur are exposed to oxygen (due to avalanches and other natural events), the newly exposed minerals provide hues of colors when oxidized. Copper, for example, turns green and purple. 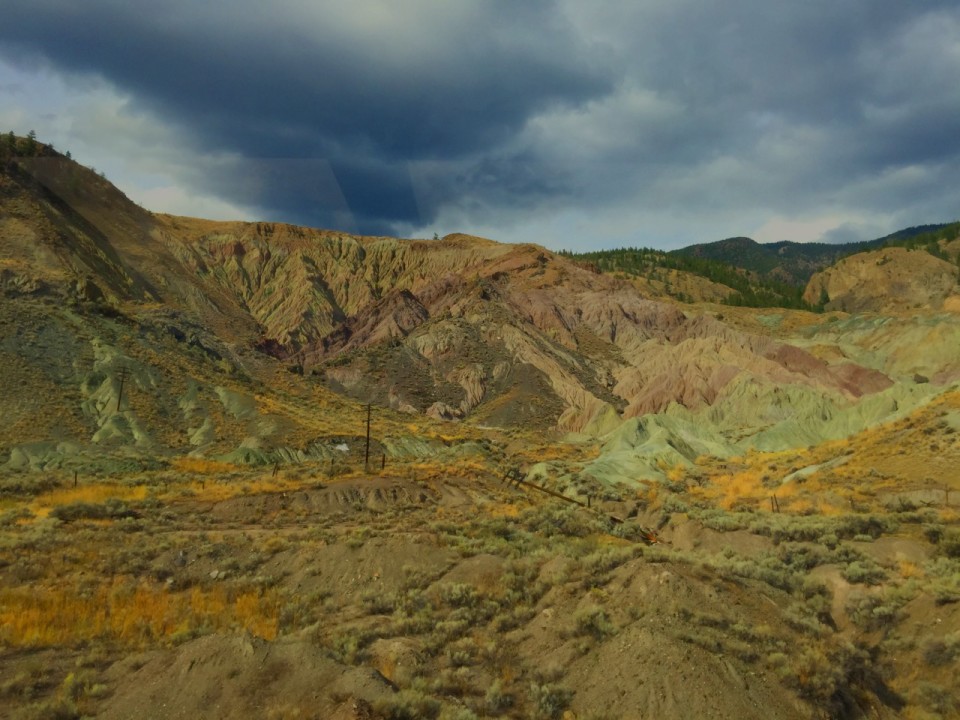 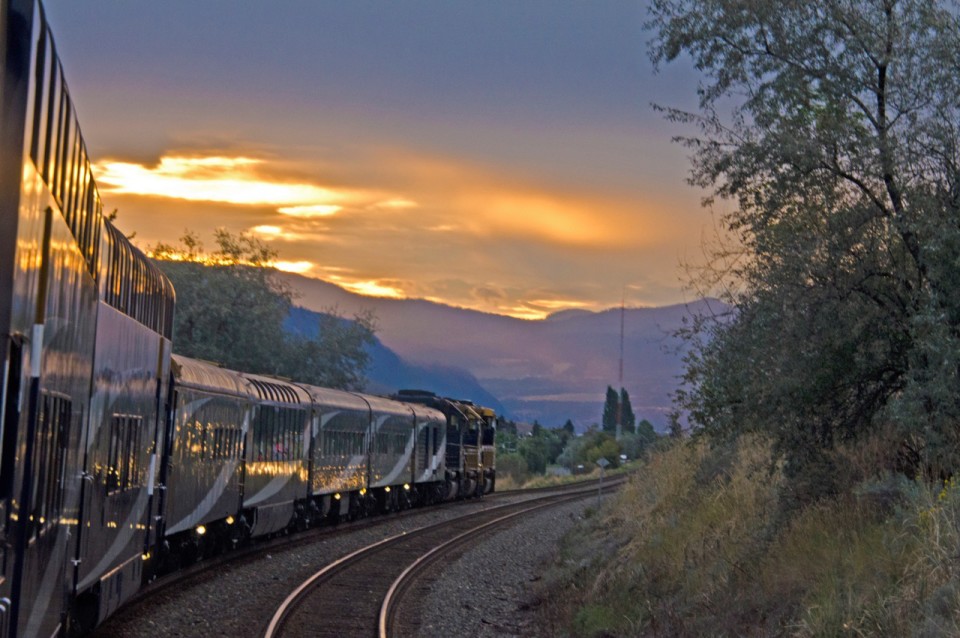 As we continued on the route and drifted through Western Canada, we saw in the distance the first overnight stop of Kamloops. Greeting us upon arrival was the Kamloops Mountain Patrol on horseback! We overnighted here and continued on the next day to Banff… 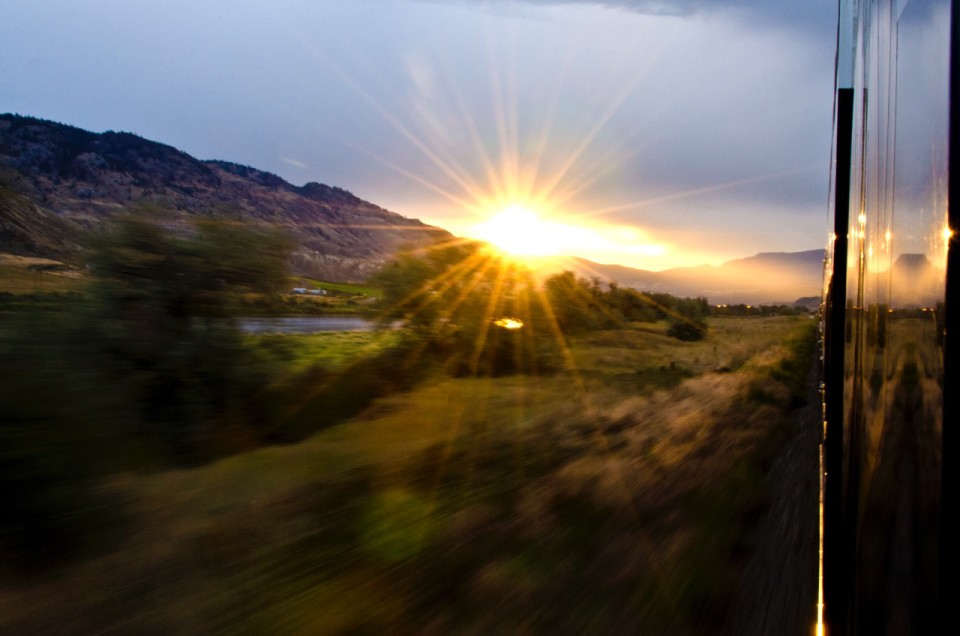 Back on the Rocky Mountaineer Train, it is not long before we encountered the spiral tunnels located outside of the town of Field, which is a great feat of spiral engineering. The steep grade of the mountains caused the engineers to create this spiral system back in the early 1900s. The construction of these two spiral tunnels allowed them to lessen the grade of the mountain by 2.2% and make train travel so much easier. This instead of the nearly impossible grade of 4.5 degrees, on “The Big Hill”.

This would have required too many puller and pusher engines for every freight train that goes through this section of the Rockies. The train crossed over the entrance when it exited the first tunnel. The tunnel then completes a 270-degree left-hand turn while gaining elevation.

A little further up the tracks, it does it again to the right. The Rocky Mountaineer Train is the ONLY passenger train allowed to traverse this route. The manpower to build these tunnels through the sheer rock was about a thousand employees at a cost of almost 1.5 million Canadian dollars. This is one of the steepest and most scenic railway lines in North America. 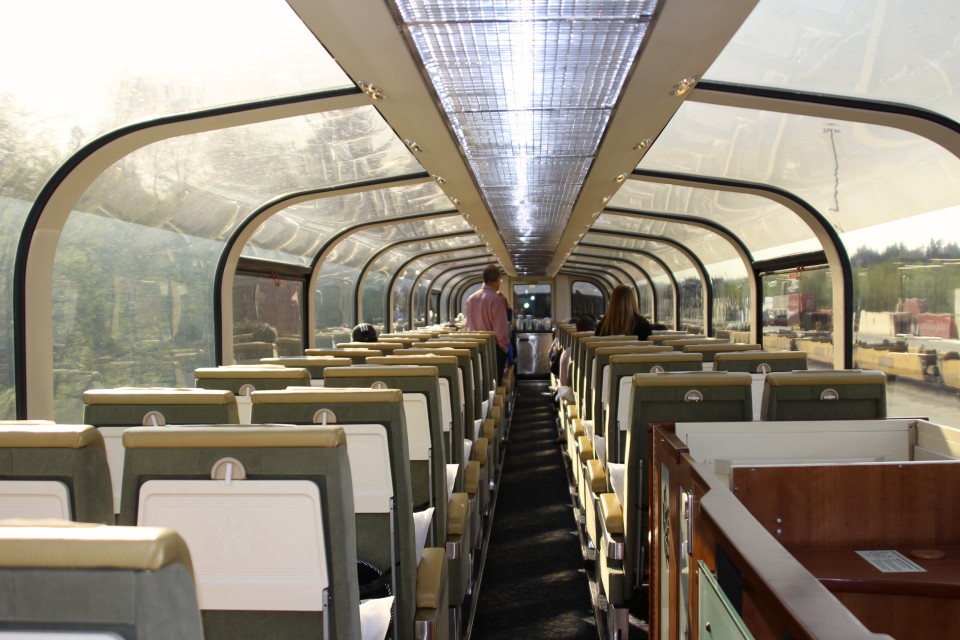 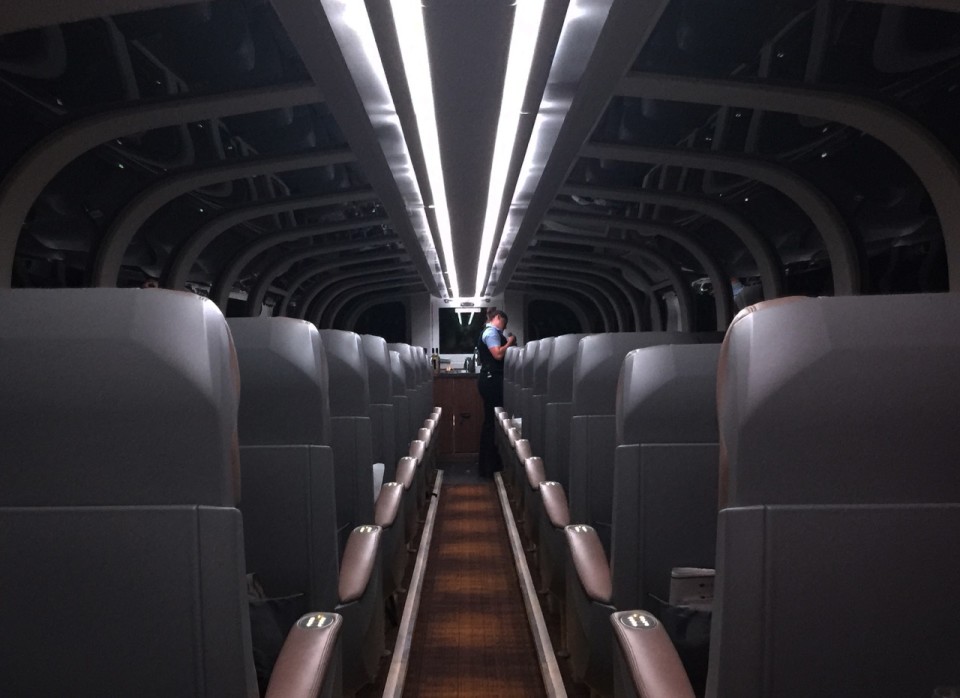 The view inside the Rocky Mountaineer while traveling through the Spiral Tunnels. It was very dark once inside the tunnel system. Photo courtesy of Greg Wilkins of Wilkinswerks Photography

Then, at an elevation of 5332 feet, up next is the Continental Divide, which marks the highest point in our journey and is a geographical phenomenon. The boundary between British Colombia and Alberta Canada provides a watershed to two major oceans, where the water to the east flows to the Atlantic Ocean, and water to the west flows to the Pacific Ocean! How cool is that?

Then soon after, our final destination on the Rocky Mountaineer train has arrived. It is the glorious town of Banff, which is Canada’s very first national park. It is home to bears, elk, and bighorn sheep, as well as other wildlife and encompasses 2500 square miles. 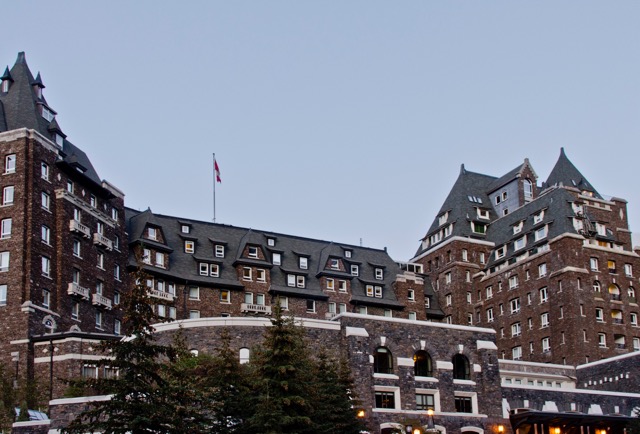 One of its major attractions is the Banff Springs Hotel, a royal favorite for years. It is one of the only hotels I know of that has a hotel historian. Mr. Dave Mosberg, who has worked at the hotel for 50 years, explains to my group that the hotel gives a “sense of place and a sense of time.”

Many major celebrities have graced the halls of this stunningly beautiful hotel. So it was here, that I felt like royalty and rested my head. I said goodnight to two days of train travel on the Rocky Mountaineer Train and anticipated a full day in Banff the following day to explore this stunning masterpiece of a town. 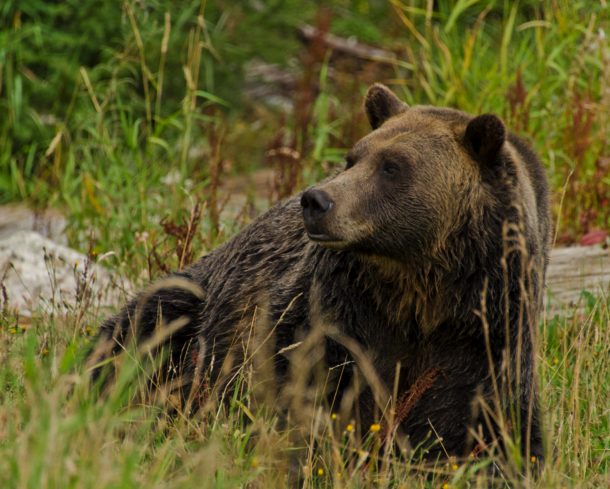 For more good reads about the Rocky Mountaineer Train:

7 Things You Will Not See on the Rocky Mountaineer

Disclosure: I was hosted by the Rocky Mountaineer Train company and Fairmont during my stay while visiting Vancouver to Banff, Canada this year.

I so want to do this...looks/sounds like so much fun!

It would be right up your alley! Only instead of a road... it is a track!