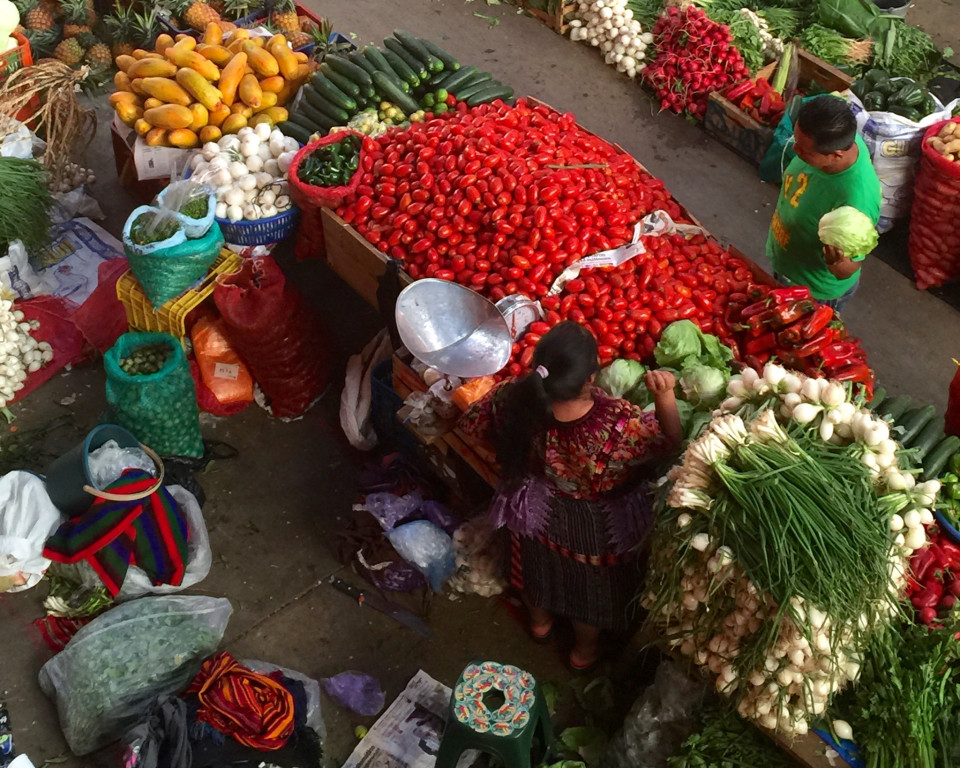 Chichicastenango is an indigenous village lying on the crest of the northern volcanoes in Guatemala. It is at an altitude of almost 2000 meters (6500 feet) and is especially busy during market days which are held every Thursday and Sunday. The market days are a hustle and bustle atmosphere, unlike anything I have ever experienced in all of my travels. The mountain villagers come from around Lake Atitlan to sell their wares and most are dressed in traditional Mayan outfits, with each village identifiable based on the clothing that they wear. 98% of the people in Chichicastenango are K’iche’ Mayan Indians and 92% speak the K’iche’ language. 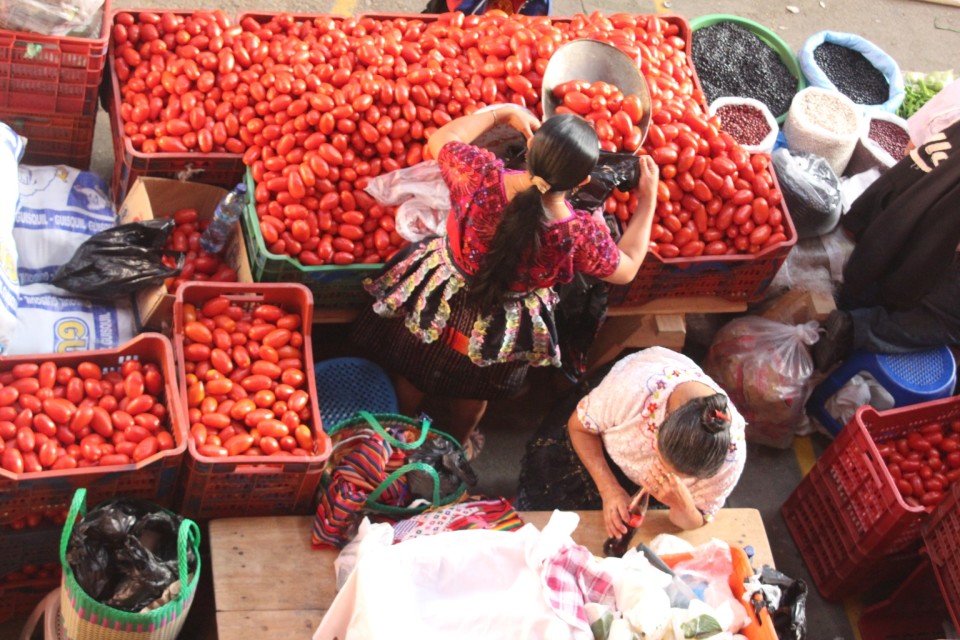 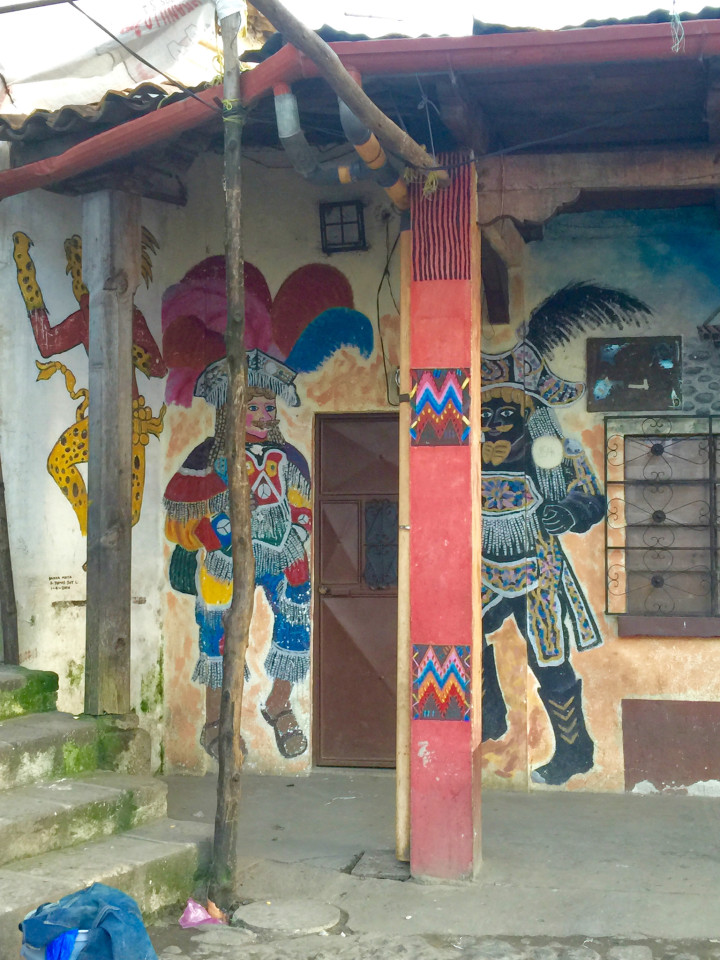 In case you would like to check out some volunteer programs, I have included a link to a local program in Guatemala.

His deep dark eyes, blonde mustache, and pale skin haunted me as I wandered through the market. I would see him over and over again at different vendor shops and I wondered who he was. Many times, I couldn’t help but stare back at his golden blond hair, dark eyebrows, golden or ostrich-feathered crown and sometimes with a glorious costume made with a colorful and magnificently sequined vest.

“Who was he?” my thoughts raced. 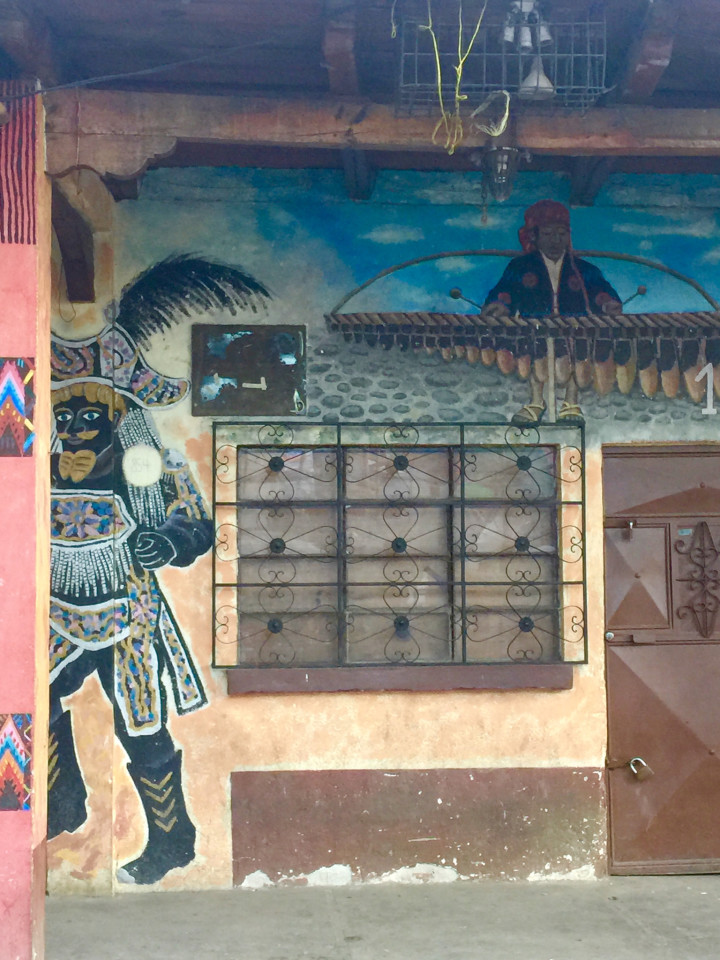 “But wait, there were more.”

The eyes of parrots, turtles, monkeys, tigers, zebras, fish and owls.  They were all staring back at me as well. Many were colorfully painted with big roundish eyes and intricate markings. Others lashed their tongues out at me. It seemed as if the animals had come alive as I stared back at them. 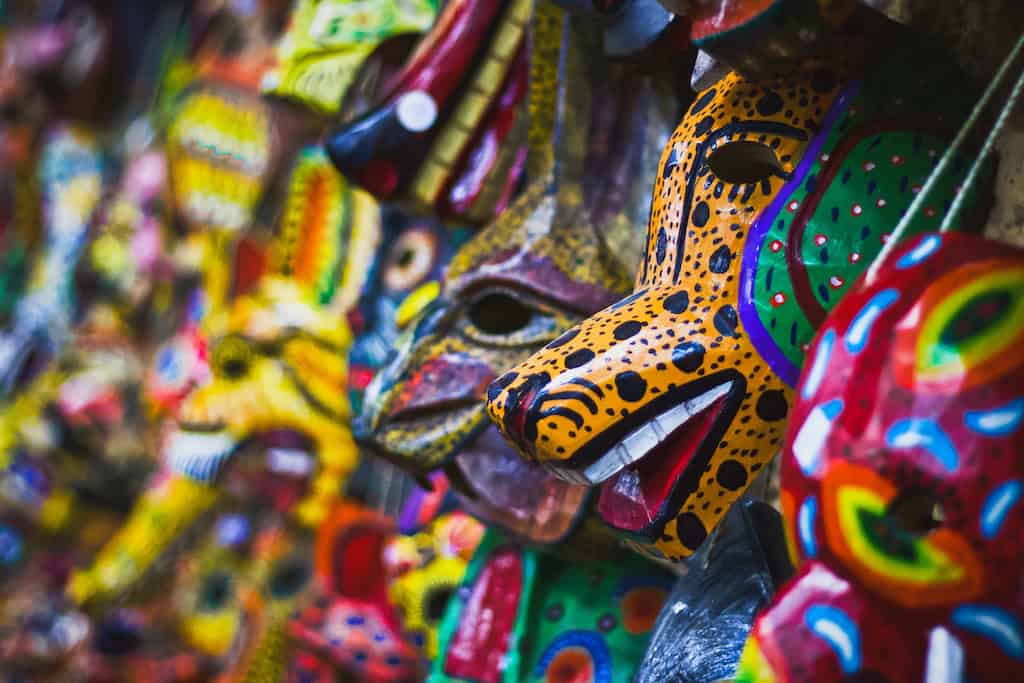 There were also the eyes of the ancient warriors from the Mayan culture, who’s eyes were dark, almost sinister. Because we, as a rule, don’t use masks in our society, they have this kind of mysterious connotation to them. When donned in ritual, these masks allowed men to become gods. Also among them were dried ears of corn or maize and bags of water hanging from the walls, the rafters, and the doors.  When asked why: “to ward off evil spirits.”  This is the land of the Mayan religion combined with Spanish Christianity and the symbiosis that has occurred here for over 500 years. 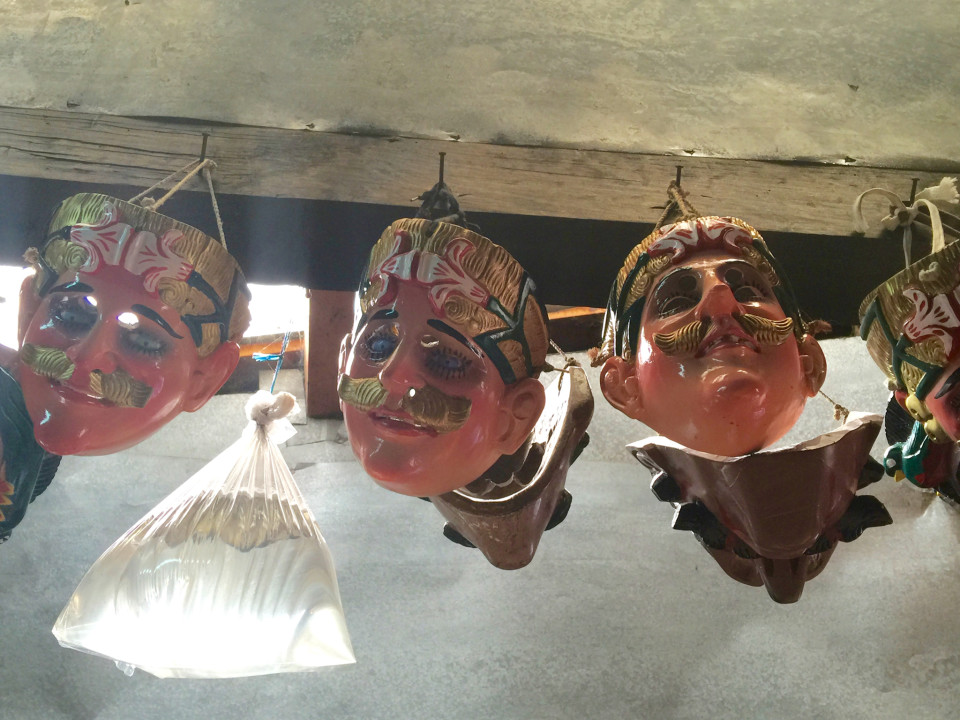 Cultural tourism (or culture tourism) is the subset of tourism concerned with a country or region’s culture, specifically the lifestyle of the people in those geographical areas, the history of those people, their art, architecture, religion(s) and other elements that helped shape their way of life.- Wikipedia 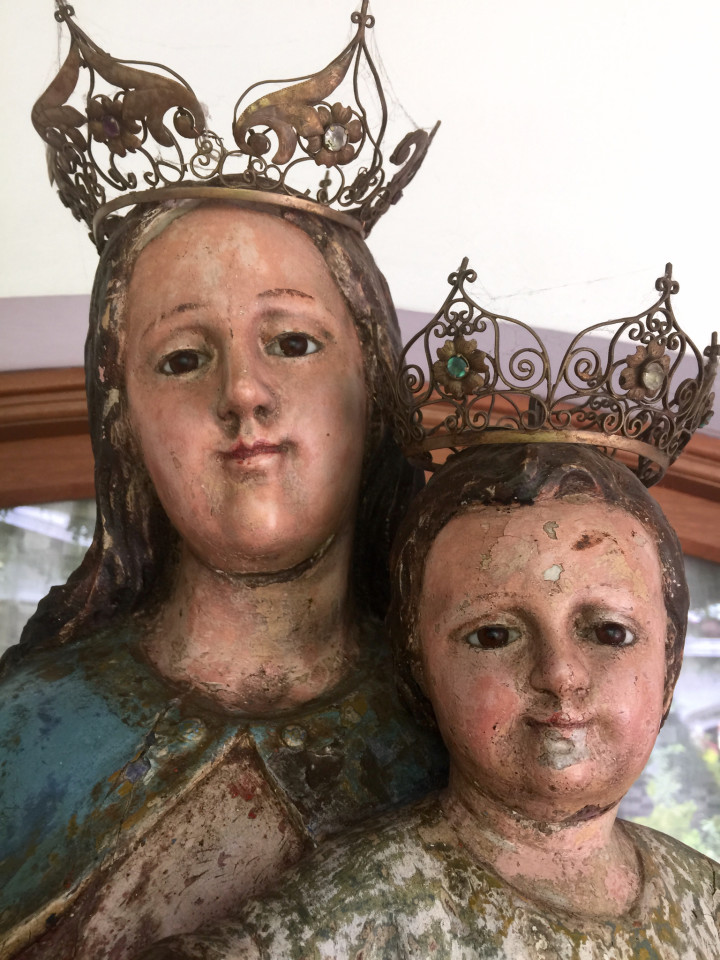 When it comes to cultural tourism, one of the most intriguing towns in Guatemala that reveals the wealth of its rich cultural heritage is Chichicastenango. It is as if time has stood still here. The K’iche’ Mayans have continued to sell their flowers on the church steps, vibrantly colored vegetables, and hand-carved wooden masks as if nothing has changed in the world around them. Walking through the market there are severed chicken heads, mayan women grabbing turkey’s by the throat and rows of vividly colored threads, that have been carefully woven into blankets.

I observed the ceremonial burning of incense with rose petals scattered on the steps of the 400-year-old Saint Tomas Church. Later in the day, on the steps of Capilla del Calvario Church, I witnessed a ceremony of the removal of bad spirits from a local Mayan man. He had requested the removal for the hope of good health. It was fascinating to watch the shaman pray over him, do the laying of the hands and then spit at him on the steps of the church with his family watching on. Chaos and fascination are the names of the game here, never knowing where to look next.

While exploring Guatemala, I had the opportunity to visit a back-alley mask museum in Chichicastenango known as Moreria Santo Miguel Ignacio. The Moreria Santo Miguel Ignacio Museum is here to help record the cultural significance of the costumes and masks from the K’iche Mayan’s past so that it is not lost in centuries to come. I use the word “museum” loosely here, as it is also the wood shop of a family who carves and paints masks for a living. They have brought together a group of people that are interested in preserving the costumes and masks that belong to the village and keep them stored in an upstairs room.

Passing through the open door, I can see literally hundreds of masks and statues in all sorts of conditions. Many are hanging from the ceilings and the walls, and there are still many more that are covered in dust and dirt in glass smudged and cracked counter displays. I am immediately greeted and taken to the upstairs room where the costumes are stored with no words spoken. Although fascinating, I can barely breathe due to the stuffiness and heat of the room with no air conditioning, which is common place here. I notice the man takes each piece out carefully and gently to show my group the details of the suit and headdress.

Over in the corner of the room, there is an altar, not unlike the one I built for my own son when he passed. I understand the power of the prayer place in a room. It is obvious they are quite convicted here. 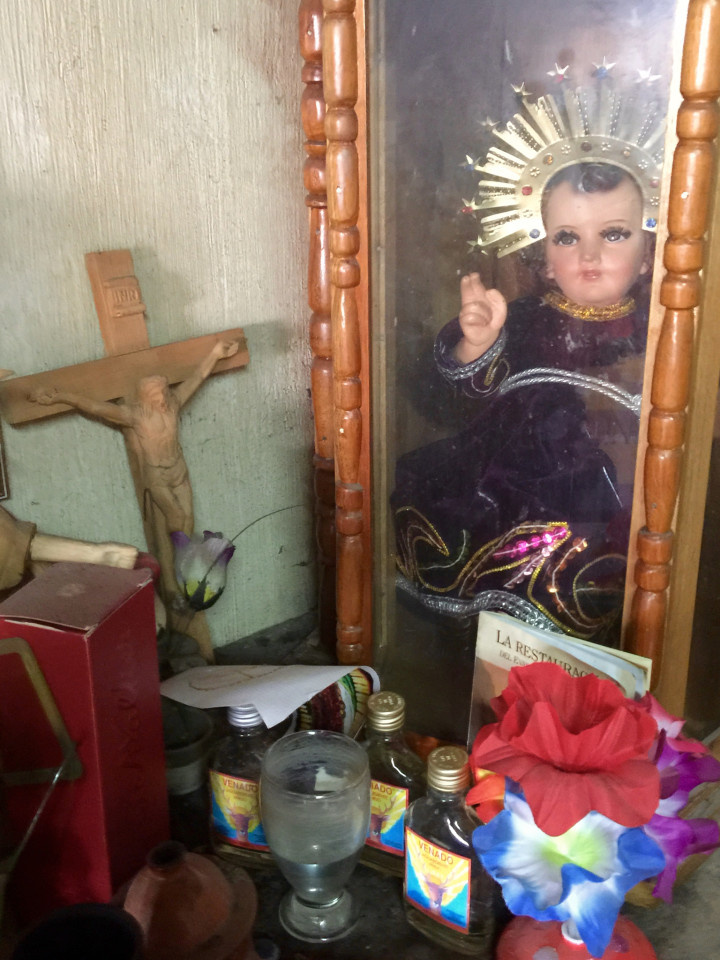 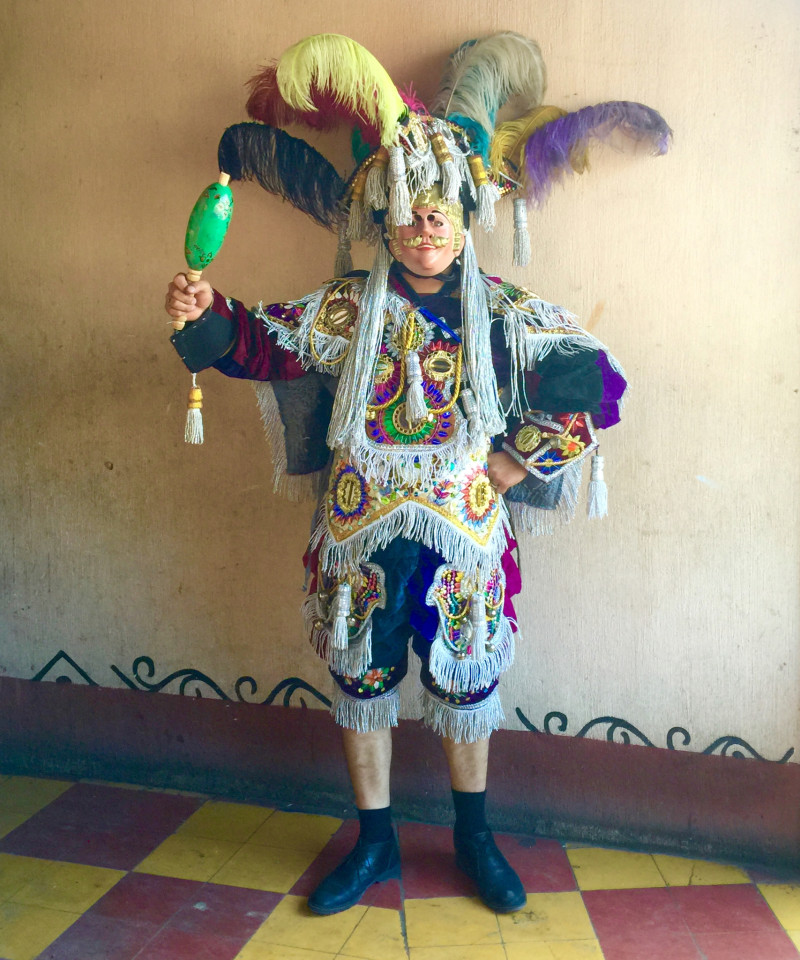 Here was a painting in the mask museum representing the Spanish conquistador, possibly Cortez or Alvarado.

The origins of some of the masks come from the Pre-Hispanic past when masks were buried with the dead. It was believed that they had a transformational function to help get one who has passed from this life to his death.

Today these masks are seen throughout the village in the outdoor shops as decorations for sale, as well as in the local restaurants, homes, and hotels.

Unlike anything I have ever seen in all my travels in over 75 countries, this ancient village was such a mix of mystical spiritualism, backroad markets, and colorful chaos, that it was hard to get a handle of what it all means. I felt as though I was being transformed, like the masks, back to a different time and place.

It was magical, rustic, and fascinating all at the same time. And although the original meaning of these masks may have been forgotten, they tend to use them here to help craft the identity of the people.

Why is Cultural Tourism Important?

One of the better aspects of cultural tourism is that it can be experienced in almost every part of the world. I have written extensively about the old world crafts of violin makers and the lost art of print blocking in Italy, for instance. This type of tourism provides a great opportunity for the conservation of the culture and heritage by bringing in economic resources to allow for the preservation of some of these ways of life. I believe it possibly can help people’s tolerance and cultural understanding when meeting other people from these areas.  This, in turn, could lead to a more peaceful approach to modern life and the negative impacts of globalization.

In my humble opinion, this village is one of the “do not miss” things to do while in Guatemala.

Disclosure: I was a guest of the Instituto Guatemalteco de Turismo (INGUAT), whose hospitality was gracious and took great care in the safety of my group. Along for the ride were travel writers Annette Slowik-White of Bucket List Journey, Jessica Kay of A Passion and a Passport, and Stephanie Be of Travel Break.

Previous Post: « Magical Kerala in the Arabian Sea is a Must Visit
Next Post: Jungle Lodges and Resorts: The Top 7 in India »