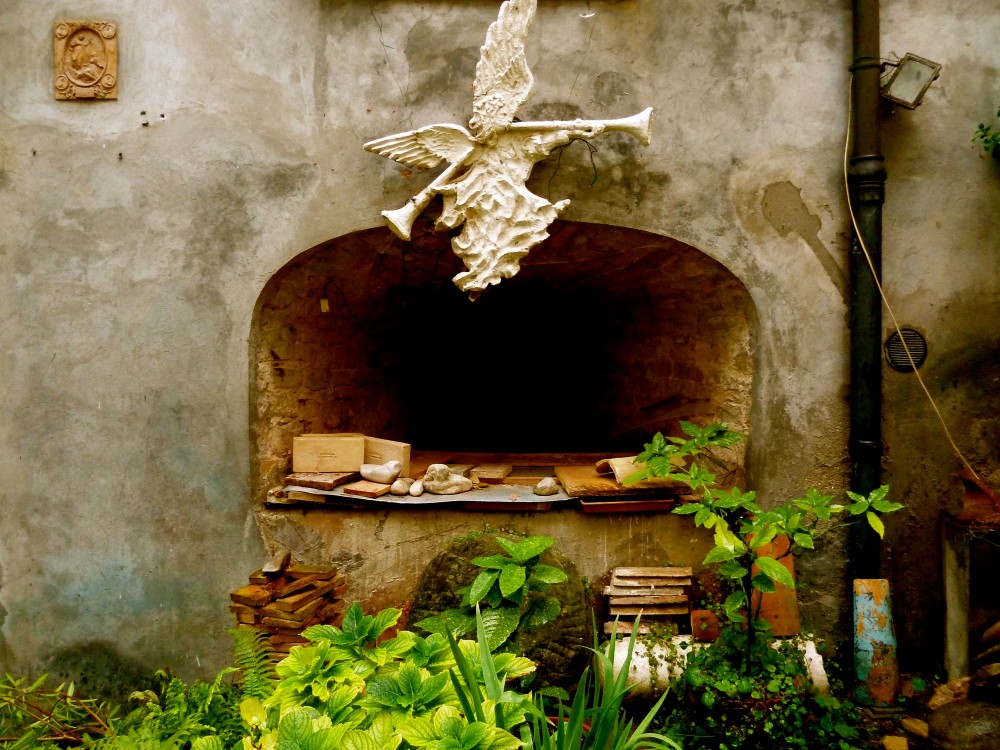 Luigi Lombardi’s Garden to his Violin Shop in Forli, Italy

What's in this post: hide
1 La Bottega del Legno: The Wood Shop in Forli, Italy
1.1 The Violin
1.2 Sounds from a Violin
1.3 The Making of an Instrument Workshop
1.4 Get a Guide in Italy
1.5 The Tools of an Artist
1.6 Mr. Lombardi’s Craft
1.7 Grand-daughter takes an Interest
1.8 Creating “the Voice” of a Violin
1.9 This Shop. This Man. Was my Highlight! 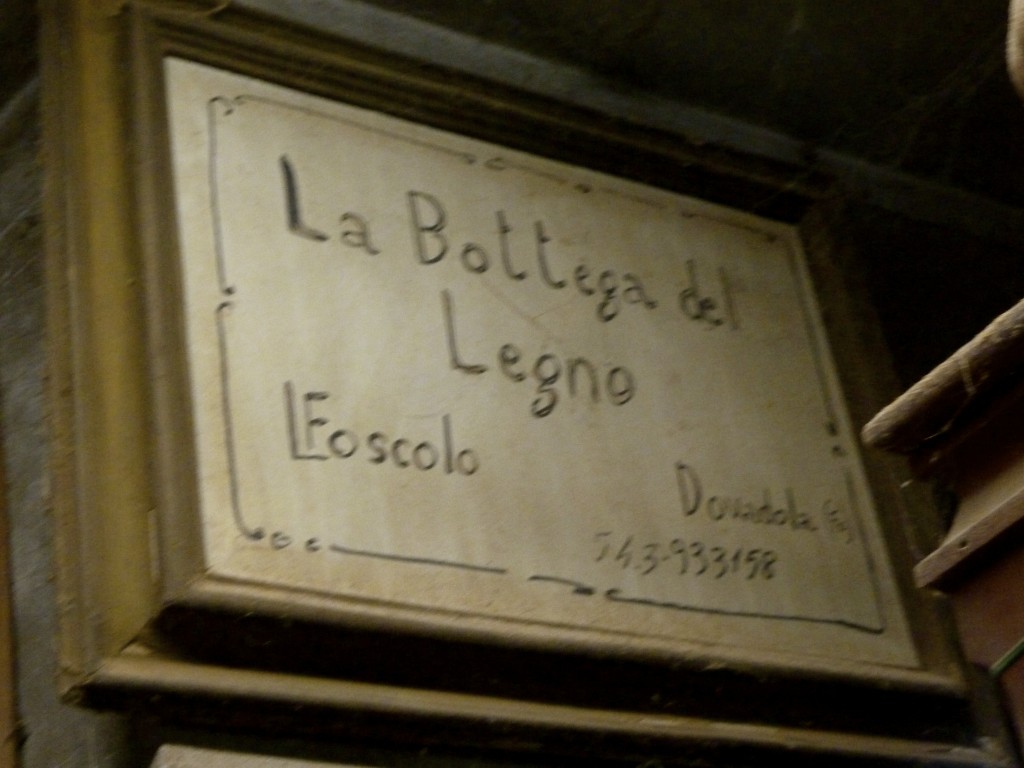 The year was 1943 and it was blistering cold.  The conditions were unbearable and he struggled with making it yet another day.  Days ran into more days at the concentration camp. 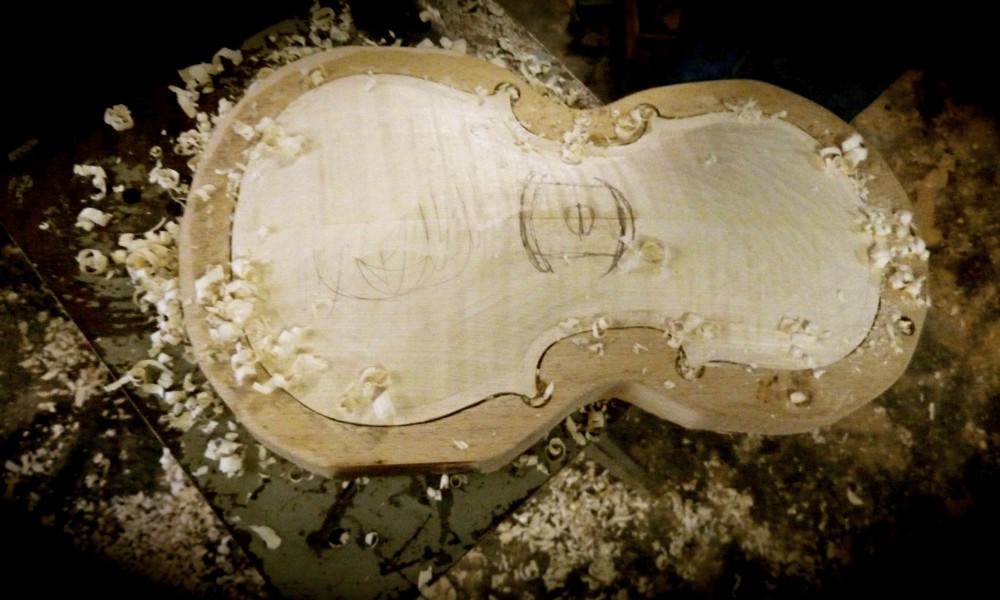 But there was one thing that Giuseppe Lombardi loved and that was the sound of music and his passion for that would not die here.  One day while out walking in the yard, he couldn’t believe his eyes as to what he had seen, an abandoned, broken umbrella.  He swooped it up and slipped it underneath his shirt.  “This,, ” he thought, “could be used for creating a tool to make musical instruments.”  He used the stick of the umbrella with its metal pieces to create an instrument so that he could carve musical instruments out of pieces of wood that he had found. 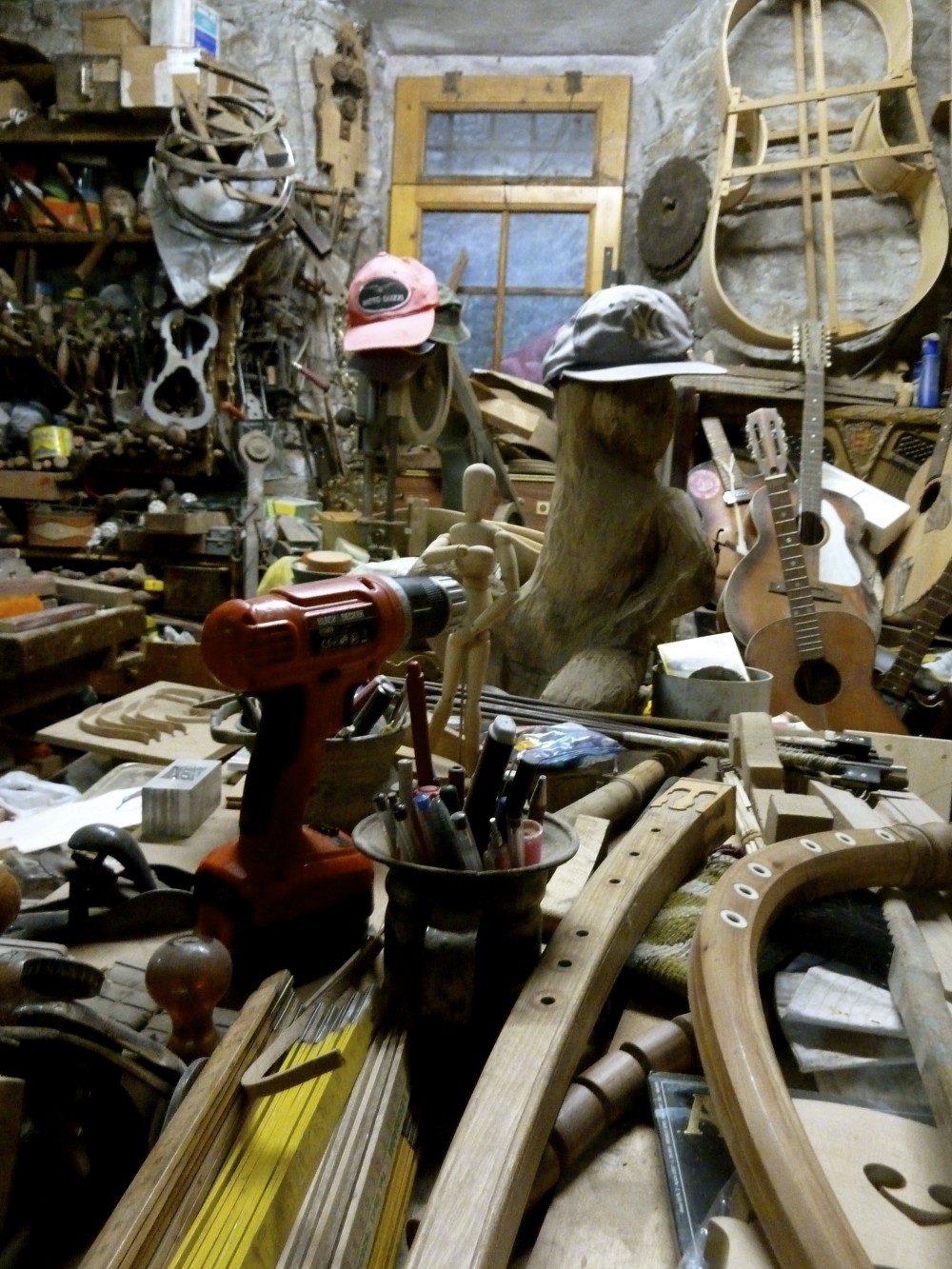 After carving his first primitive instrument, the violin, he started to silently play it when the radio was on. Yet over time, one of the guards heard him and asked who was playing that music, as at first, the guard thought it was the radio, too… alas, he had to give it to the imbecile, who subsequently broke the violin in half.

Sounds from a Violin

But Mr. Lombardi was not broken and knew he had the tool to make another, and so he carved another one and started to play again.  But something different happened this time. The General had arrived at camp and asked about the sounds of the notes he heard, as he was a violin player himself and when Guiseppe came forward, the General asked him to play a little more and then abruptly stated that it was “the best music he had ever heard”. 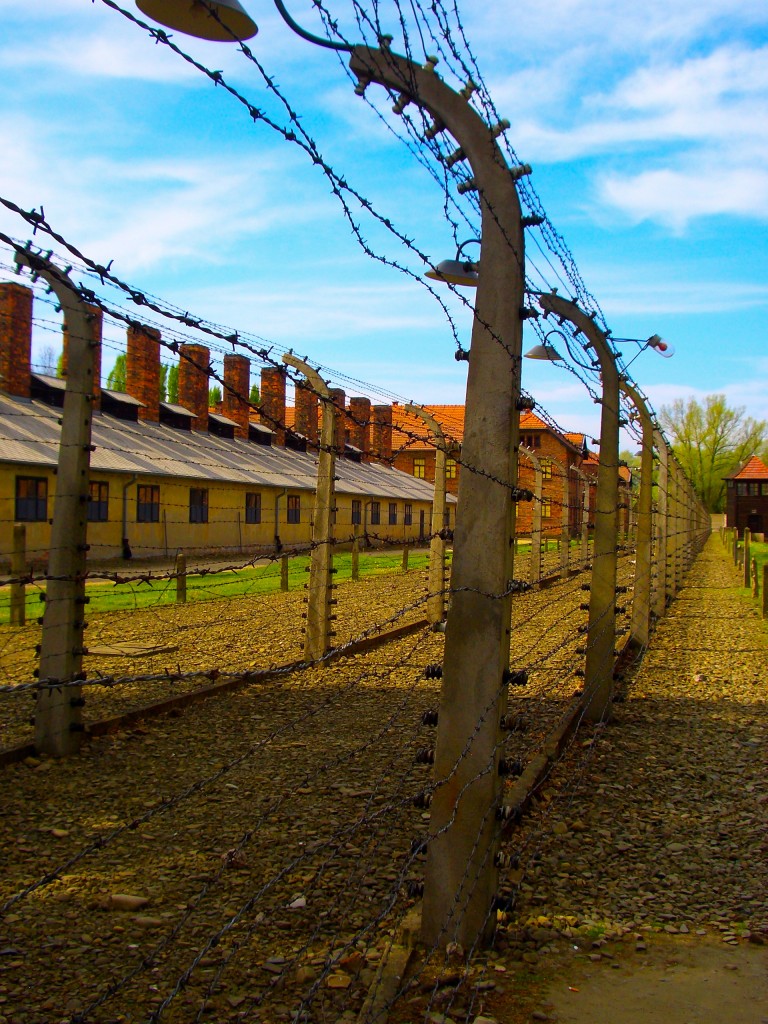 The Making of an Instrument Workshop

He took Mr. Lombardi with him, giving him a truck to make an instrument workshop, where he eventually created 54 pieces to form an orchestra with his very own hands!  His orchestra was called to play at the King of Palace in Baghdad and won a competition in 1944 against the Americans!

Now 70 years later, I stood in wonderment, as I approached the son of Guiseppe Lombardi’s old instrument’s woodshed in Forli, Italy, in which Mr. Lombardi used as his craft since 1946, his own father an instrument maker before him. 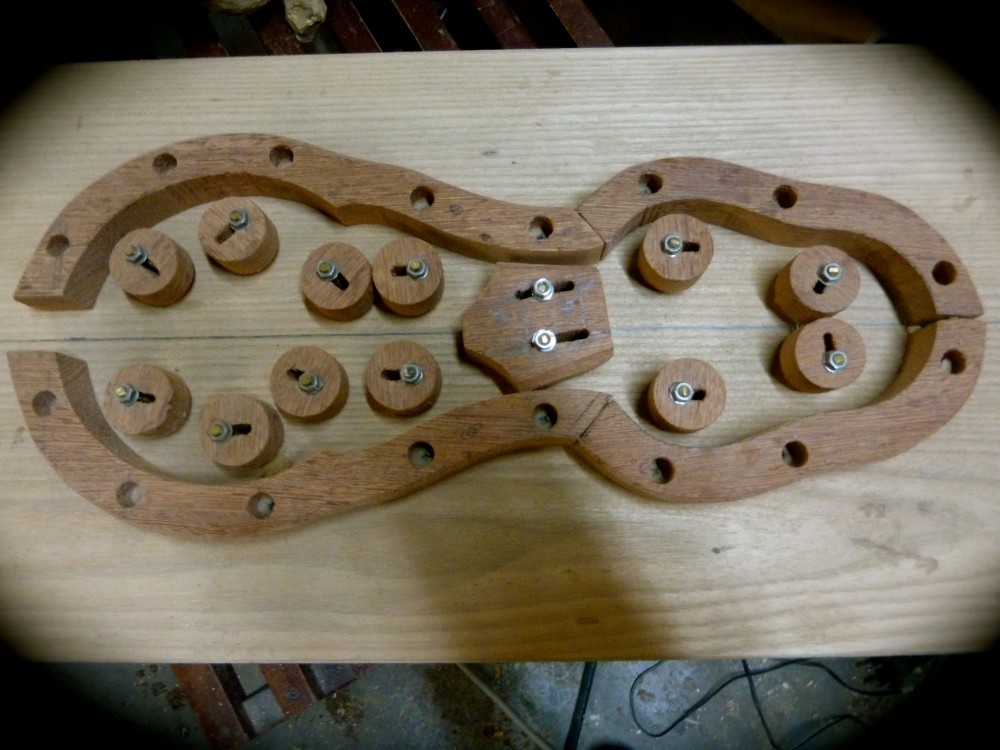 Get a Guide in Italy

Had I not been led here by Gabriele Zelli, Alessandra Catania, my fearless leader, a local guide/translator Lisa Rodi, and the mayor of Dovadola, who happened to be a history buff and knew Luigi F. Lombardi, I would not have even known his shop existed. This is a great reason to get a guide while you tour regions in Italy. 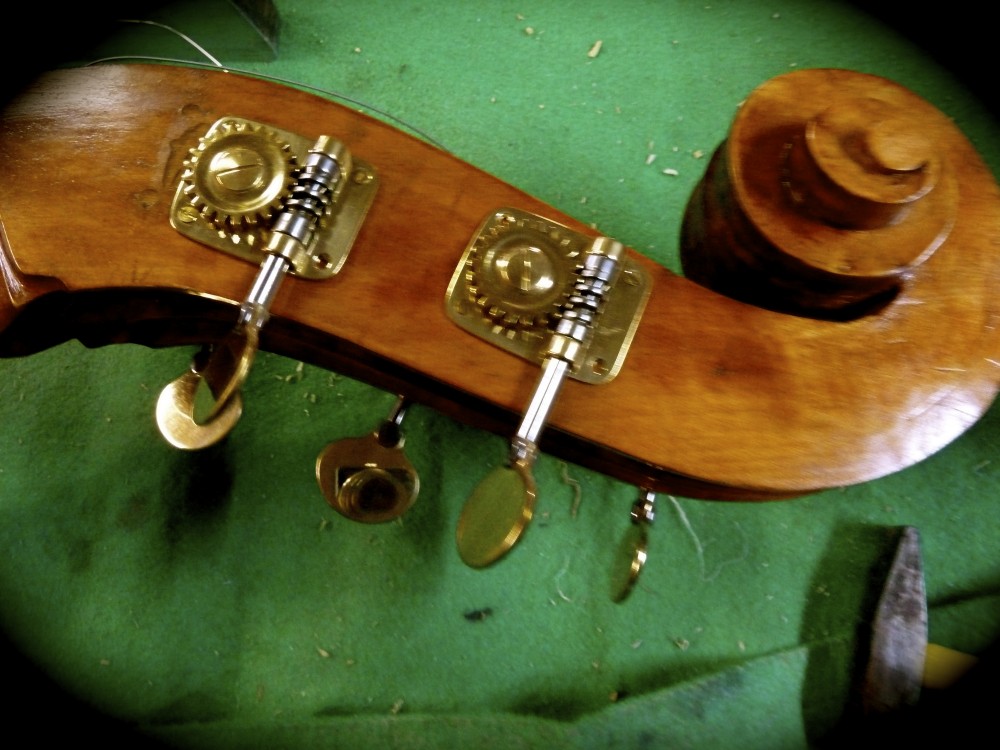 The studio was like a childhood dream of entering into your grandfather’s garage that was jam-packed with everything interesting. 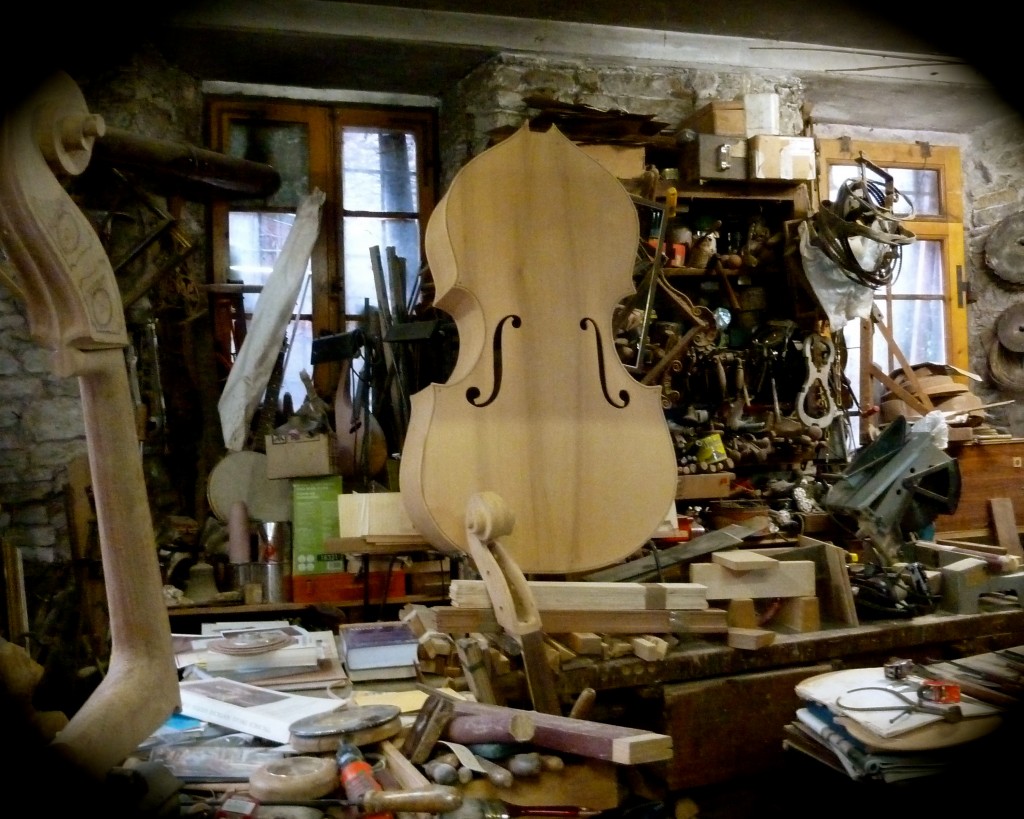 With hundreds of pieces of violins in varying stages of development, wood carvings, 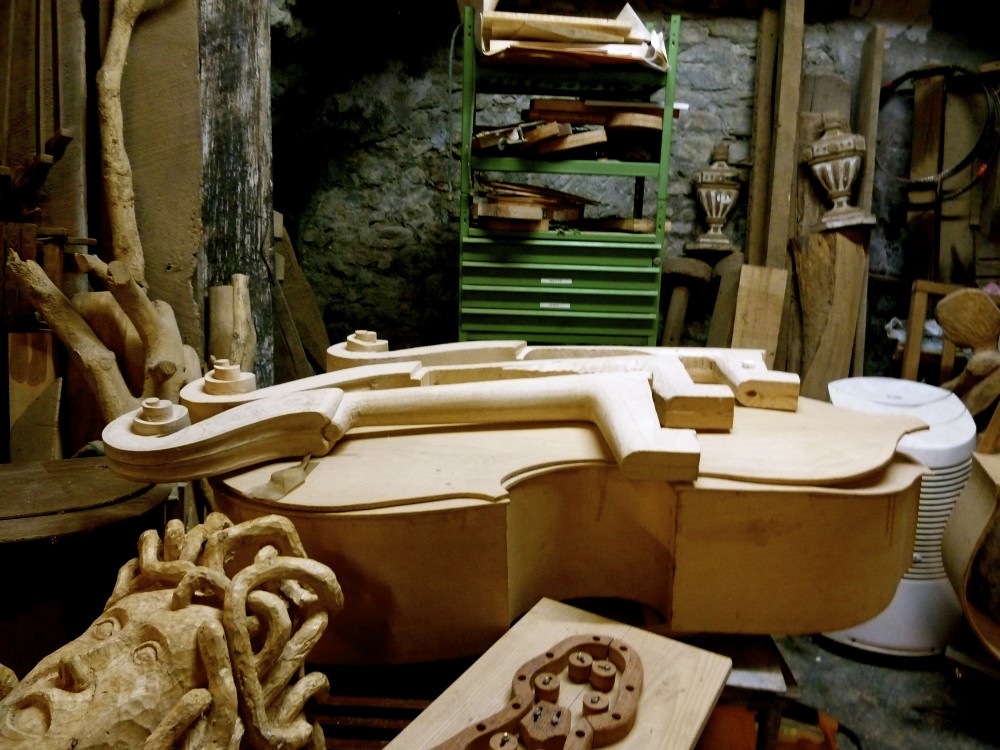 old photographs of what looked to be his mother’s photo with her riconoscminto (number  45465) Tessera, which I believe to be a marriage certificate declaration in Milan, Italy that is used when one spouse is absent. 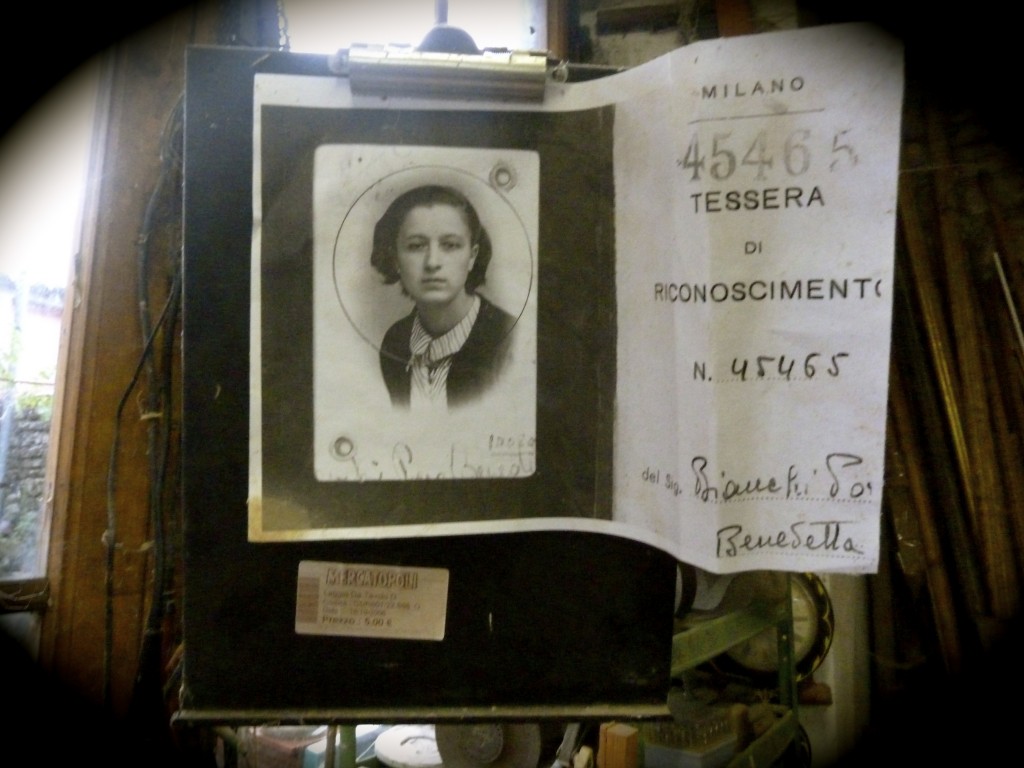 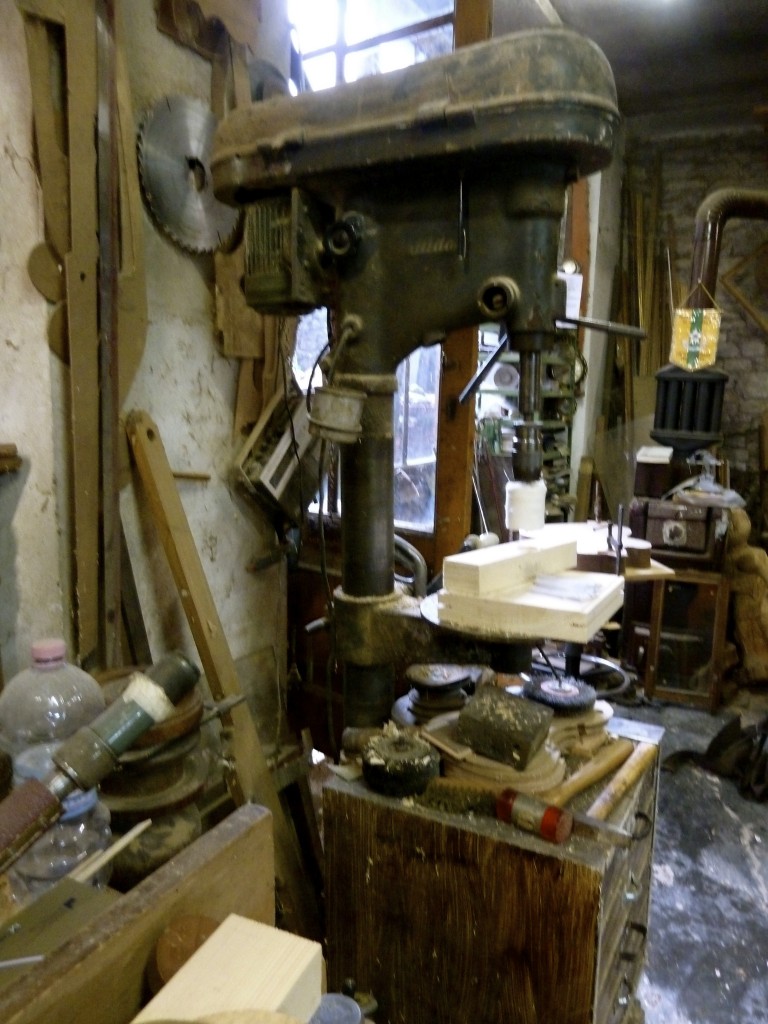 The Tools of an Artist

There were also interesting wood-carving tools and equipment, paint and lacquer spray cans, and wood chips lining the floor, reminding me of the I SPY books or the cover of a 1000 piece puzzle, where there are just too many things in the picture to take it all in. 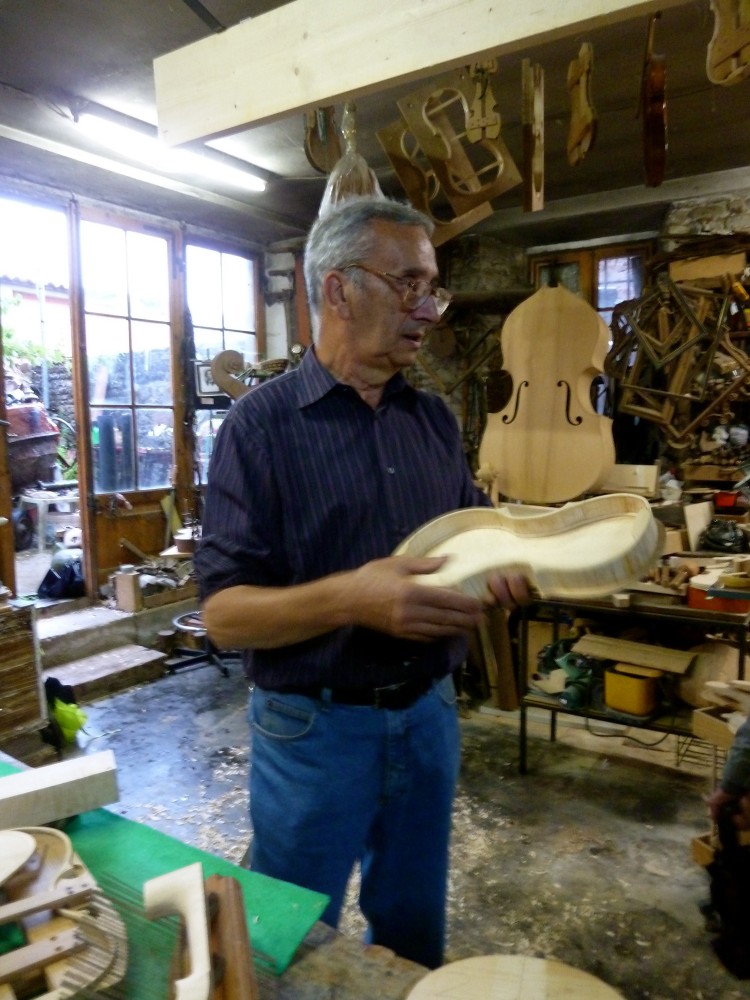 This was his studio.  And Mr. Lombardi’s son, Luigi, took over the craft, could not have been more gracious, kind, and humorous.  He told the story of his Father and how he had learned the craft of violin-making from him.  His Father’s memory glistened in his eyes as he told the story and I could tell he was trying to hold back the memories with his watery eyes when he went over to the cello and played and sang a song for us. 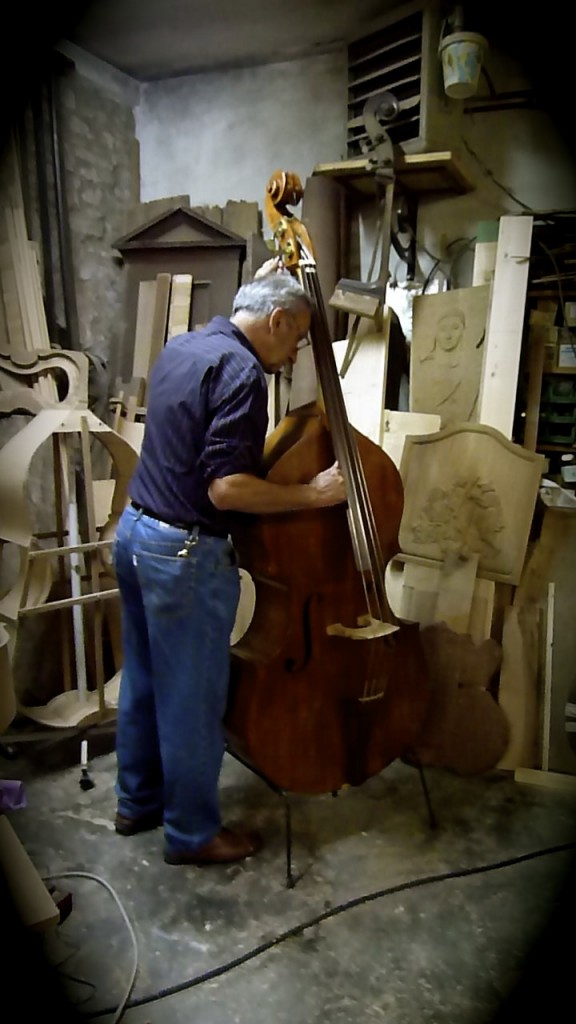 When I asked him about his craft and who would be taking over the family business, he told me both his sons had moved to America and quipped that his 10-year-old granddaughter would be the next one in line, that he would stay alive until he could teach her!  “What a shame,” I thought, “that this craft could be lost if no one takes an interest in the art form.”  As literally, I could see that it is something that one would have to practice for years to get it just right. 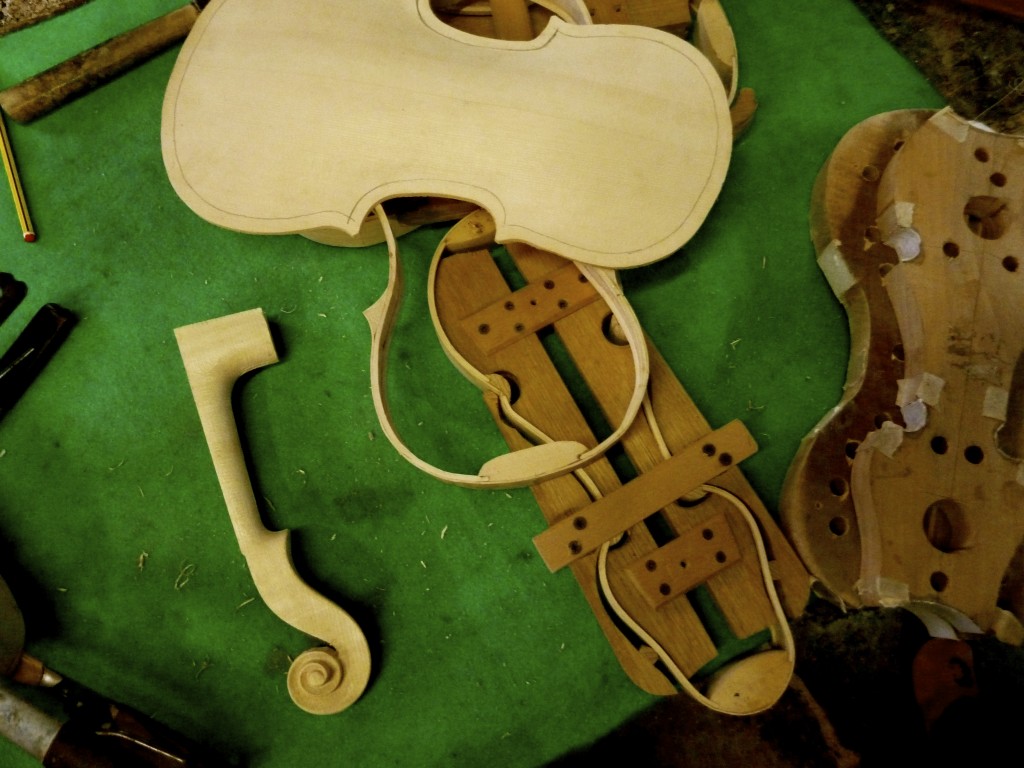 Creating “the Voice” of a Violin

Luigi gave us a demonstration of how violins are made–from finding the perfect piece of wood, then holding it up to your ear and knock it on the other end, then spin the piece around and try again–if the tones match, it’s a good piece of wood.  I listened, but I am sure he heard something different than what I heard.  He spoke of the chiseling of the wood to the drying process of 30 days to let the wood settle, allowing the violin’s “voice” to age like a fine wine.

He talked about the wood and how each piece of wood needs to be worked, and that not all wood is the same, and how it must learn to create its “voice” which takes time for the violin, as well as for the violinist.

In the end, he made by hand, coins for each member of our group.  He had made the “stamp” with which each piece of soft metal “coin” would be hammered into and he swung the hammer with such force, that I stood there in disbelief, as he had to be at least 75-80 years old. 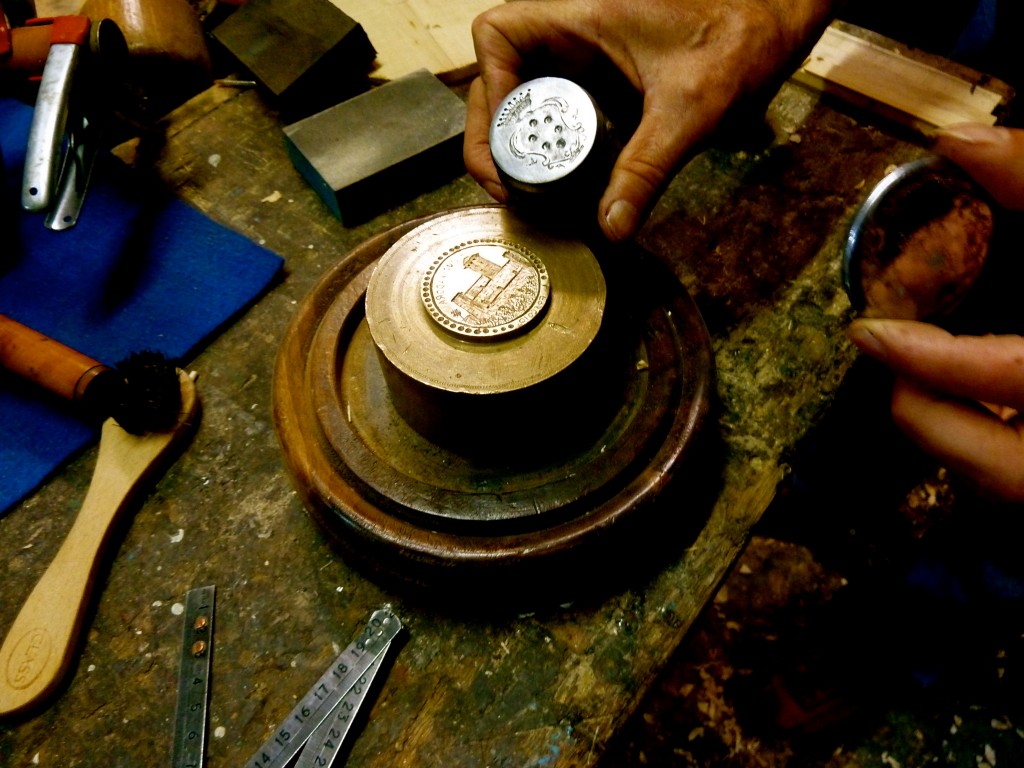 Then he would flip the metal over and swing the hammer again to complete the other side of the coin. 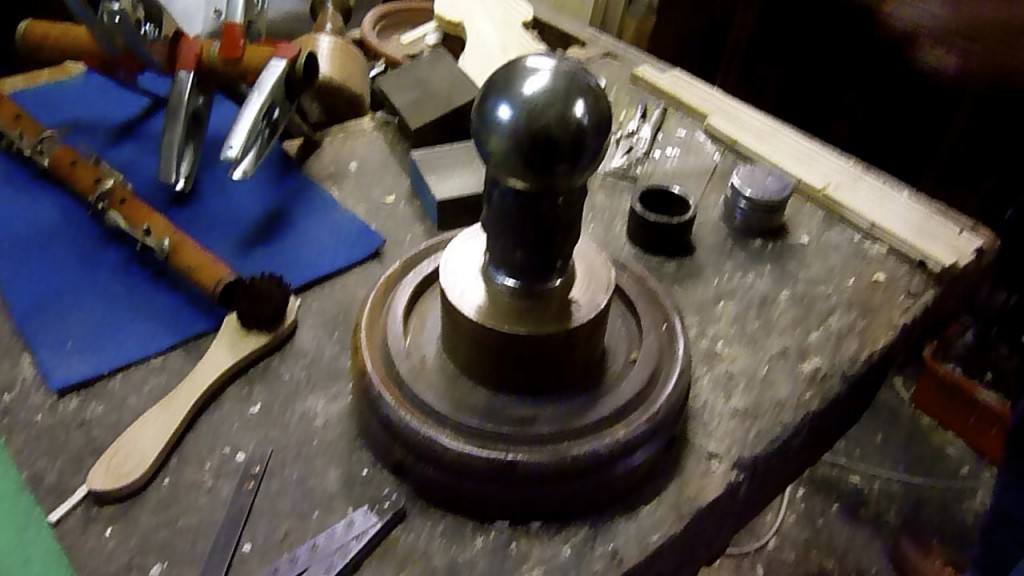 It is similar to those coins you see at tourist destinations where you put your penny into the machine and it imprints the coin with a stamp, only this was all done by hand and the coin was made from a piece of pewter. 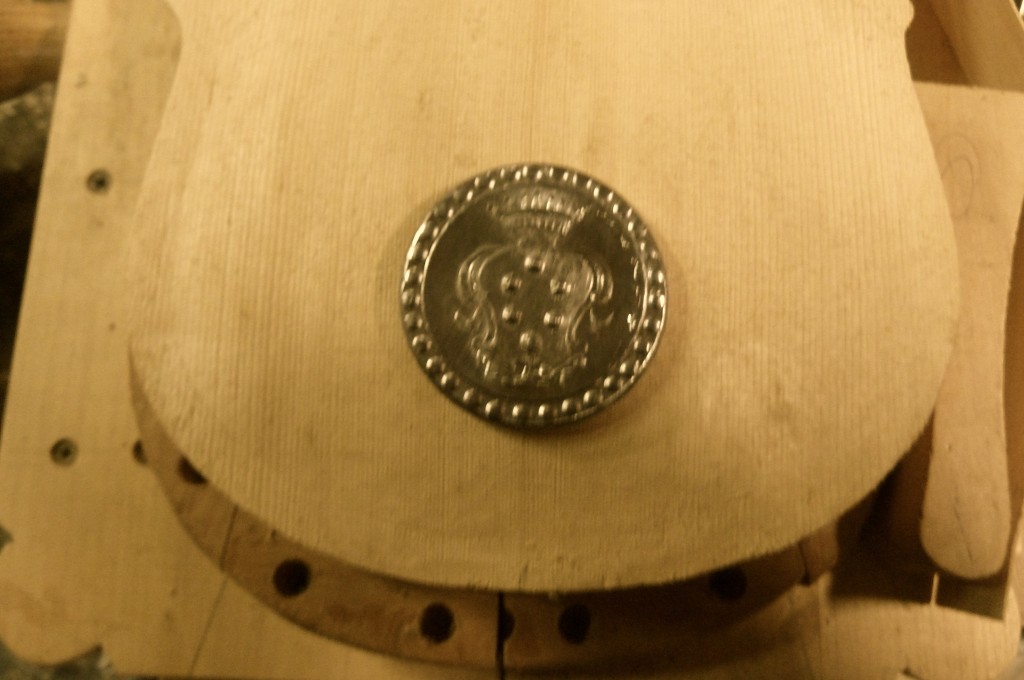 This Shop. This Man. Was my Highlight!

This day, was by far, the highlight of my journey throughout Italy, really it summed up my whole experience in the Emilia-Romagna region.  The people that you meet are the things that make a trip memorable, so keep that in mind as you go on your journey and seek out the people that are interesting to you.

Get in touch with Luigi Lombardi: foscololombardi@libero.it

I searched for information regarding Giuseppe’s orchestra competition in Baghdad, but could not find any information online. The story was translated from Italian to English to me, but I cannot confirm its authenticity.

Make this Your Next Authentic Italian Vacation

One of the Best Place to go to in Italy

Venice – Behind the Mask

More Things to do in Venice, Italy

I dream of Venice, Italy

Best Things To Do In Venice, Italy

Get the Scoop on the Best Gelato in Rome

The Woodshop in Forli, Italy

Disclosure: This post was a part of the Buonvivere Blog Tour, organized by Settimana del Buonvivere in collaboration with 21grammy.

Cacinda, I told Emilio about this yesterday evening:) He will do a news on the media of Settimana del Buon Vivere and on Fb and I will do the same. So happy to have invited you here, Have some news for you:)) Hugs

Thank you so much for sharing and for inviting me on such a wonderful tour thru your lovely Forli! Emilia-Romagna region is as amazing as the people I met!

Really interesting post - thanks for exposing us to this side of Italy...I have to go now!

Yes, you must go and you must go now! ha! I love this region of Italy and especially this man!

Great read Cacinda! We're so happy you got nominated for Italy magazine for the Best single post about Art & Culture! So cool!

Thanks GowithOh!! And next time I return to Italy, I hope I stay in a GowithOh apartment!

What a very cool experience. And what an artist he is!

Thanks Leah! What a great day it was and it really summed up a perfect week in the Emilia-Romagna region. It is a great place to visit and I completely recommend it.

You are right, Cacinda, it's the people who transform a journey into an unforgettable experience. We heard about Luigi Lombardi while traveling in the area, but were not able to connect in time to pay him a visit. Definitely on my list for next time!

o yes! he is a must stop!! One of my best memories of the region, and I love Emilia-Romagna!