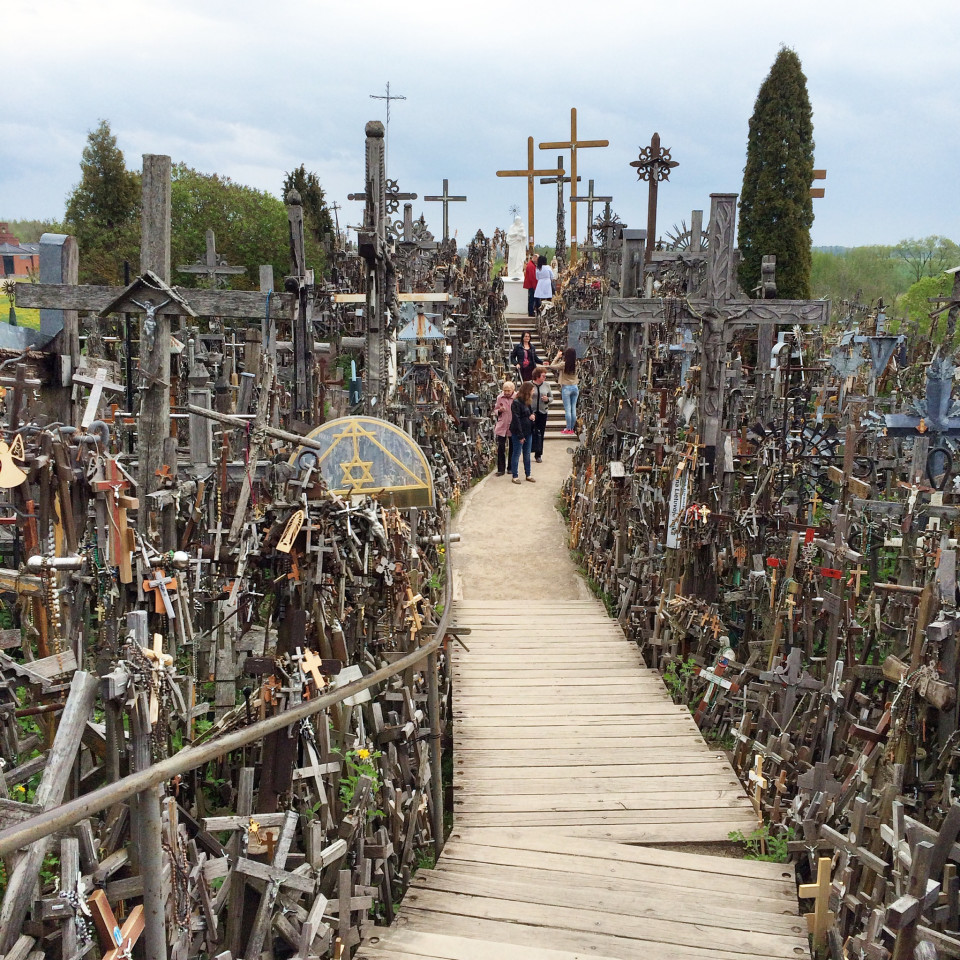 Lithuania Restores its Old Rugged Cross for a Crown 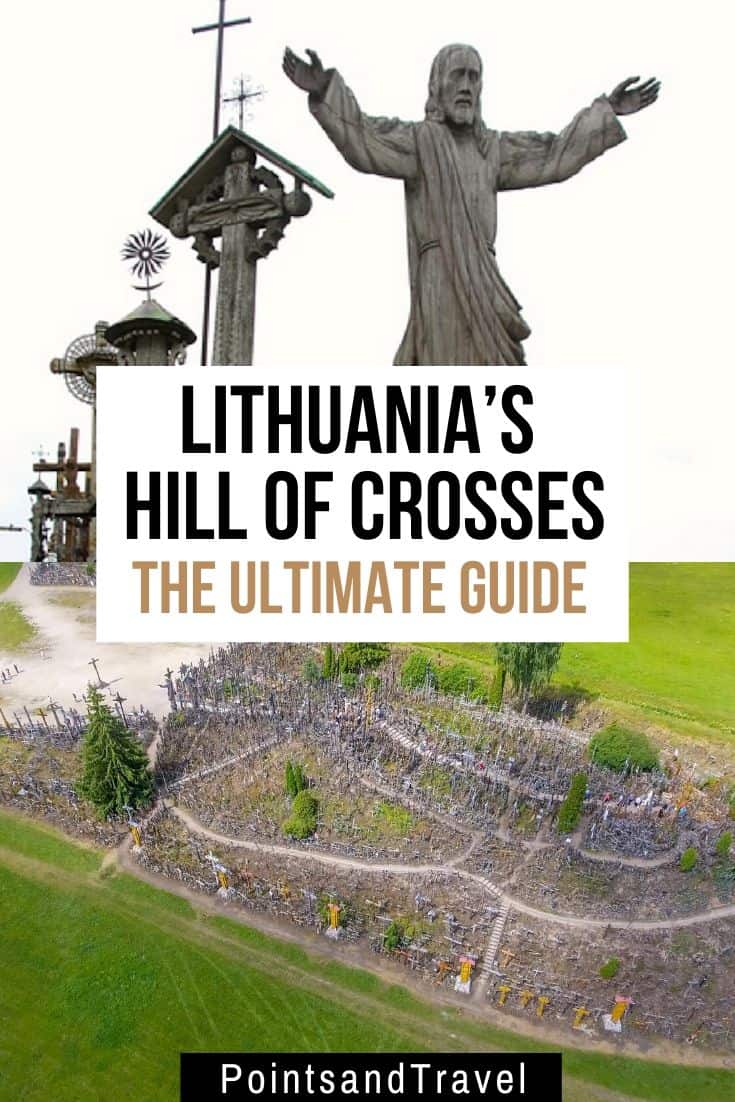 Once I arrived at the Hill of Crosses, I didn’t want to leave. Northern Lithuania’s Hill of Crosses’ magnetic pull drew me in. Almost overtaking me. I was intrigued and felt guided toward the strength that lies here. For me, I have always been attracted to the dead. Well, maybe I mean cemeteries, but either way, visiting cemeteries on family vacations was actually quite the norm for my family. As a kid on a family vacation or road trip, my Father would always pull over to visit a cemetery. Something about it gave him peace, and I guess for me the feelings are the same. We would walk along the rows of stones and discuss people who died, their names, what their interests might have been, and just in general, who they were or how they died. 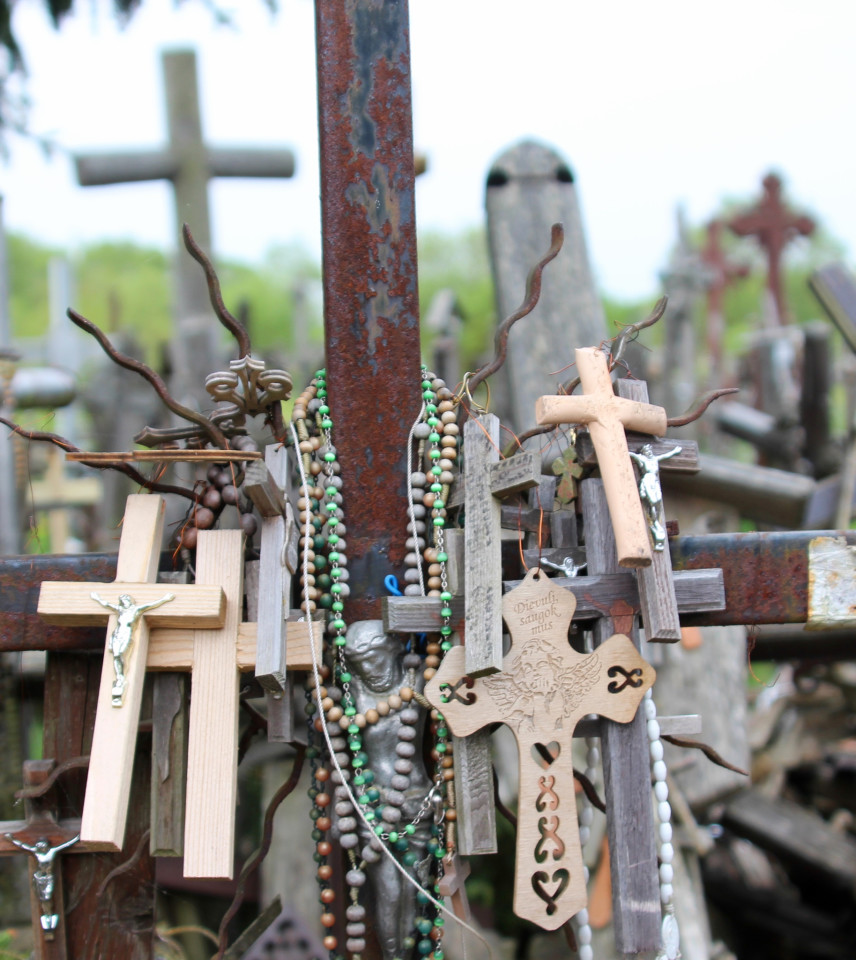 It had been slightly raining, with an on/off drizzle all morning. I was excited to finally arrive at “The Hill” after our driver had gotten us lost in the area due to the rain and its out of the way location. It is located about 7 ½ miles north of Siauliai, in Northern Lithuania. Siauliai is an ancient village that was founded in 1296 and is literally out in the middle of nowhere! 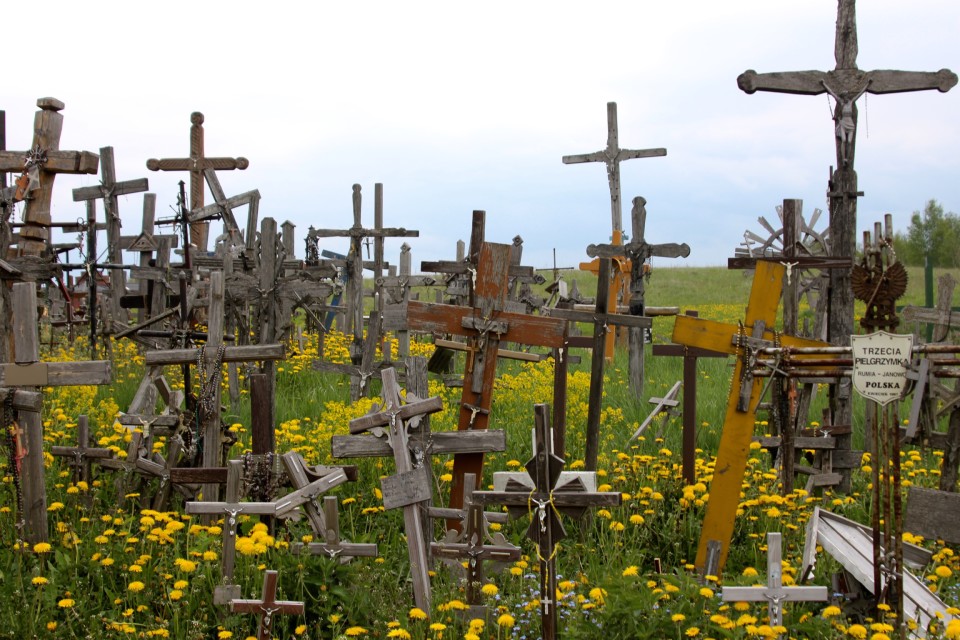 Somehow upon arrival, the skies opened and the rain stopped. Before taking the pathway to “The Hill”, I stopped by the outdoor gift shop to buy a few crosses. My eyes swept across the selection of handmade and hand-carved wooden crosses. There were literally hundreds to choose from and each is beautiful to me.

Selecting one for my dead son is hard when people are around. I try not to show any emotion. I picked one out for him. I also bought one for my paternal grandparents and one for my maternal grandmother. People with loss in their hearts know how it is hard to go places like this, so they come armed with something to plant in the ground or hang on a tree. It gives us something to do. 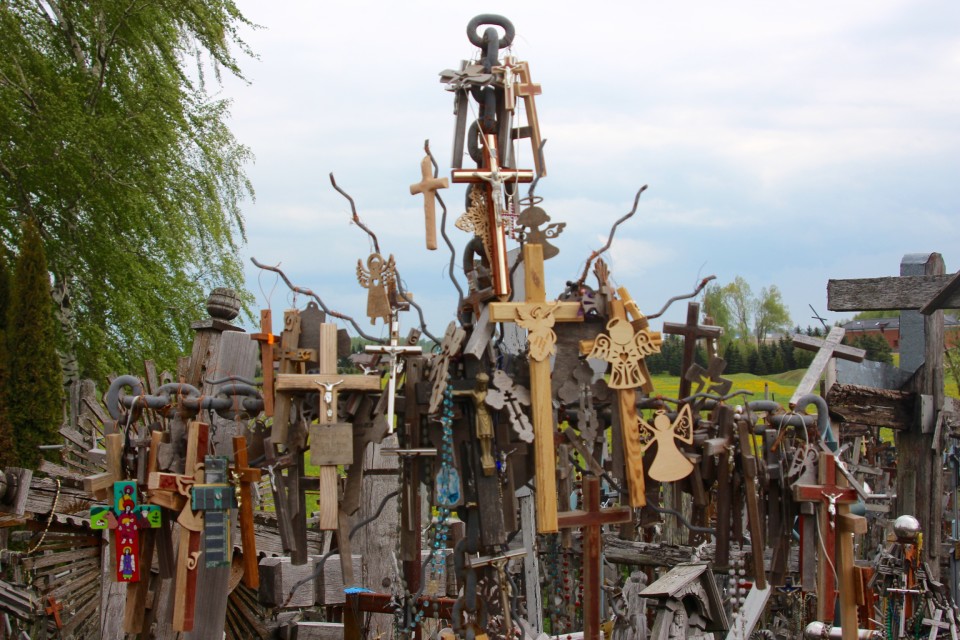 I had heard of it for years, those 100,000 crosses. Honestly, no one really knows for sure how many crosses are on that hill, as the numbers grow daily. In 1895, it was recorded that there were 150 crosses and by 1940, 400 were recorded. How and when it all began can vary, but one thing is for sure, this hill is resilience in the face of persecution. Legend has it these hills were full of crosses back in the late 1800s.

In 1961, the Soviets even flattened “The Hill” and banned people from the area. Somehow though, during the night, a cross would reappear. They would be destroyed again, but would always reappear. I like to think that faith and hope always overshadow oppression and tyranny. 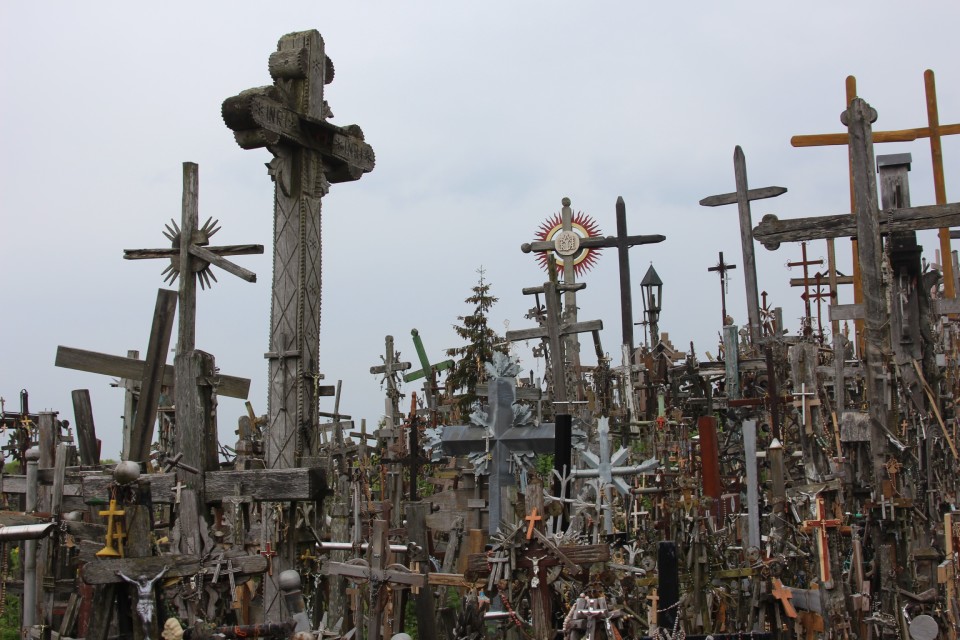 Lithuania gained its independence in 1991. At that point, I believe the hill became a symbol of the country’s perseverance, its suffering. But for me, it was magical; it had a magnetic pull to make me stare at each and every one of the crosses. To examine them and think about the suffering of the person who died themselves, their family and their friends.

The crosses stand there and they stare back at you like a testimony to their sacrifice, to their hope of a history without persecution. As I walked through the crosses, I felt the pain, the hope and the faith behind them. I also joined them in prayer for peace for this region, having only gained its freedom less than 20 plus years ago. 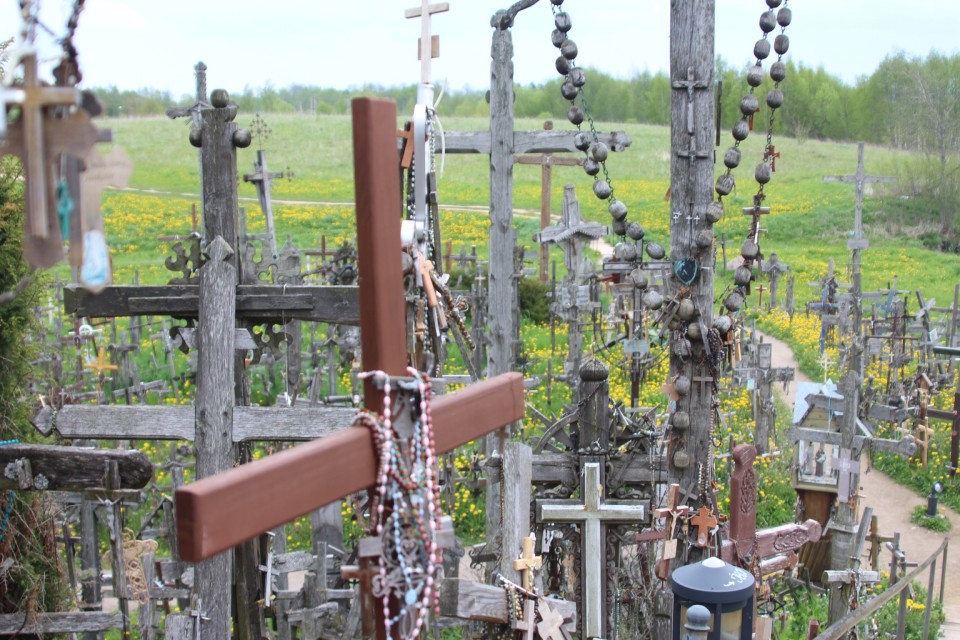 The religious significance of the Hill of Crosses was made known when Pope John Paul II visited here in September of 1993. He served mass on the hill and declared it a “place for hope, peace, love, and sacrifice.”

“Thank you Lithuanians for this Hill of Crosses which testified to the nations of Europe and to the whole world the faith of the people of this land.” – Pope John Paul II

I rejoiced when I saw a girl being photographed there by her parents when I was leaving. They brought her here to have “The Hill of Crosses” be the background. Finally, people can use this hill for something other than mourning and death. Apparently, the hill is under nobody’s jurisdiction, so people are free to admire and place crosses here as they see fit. 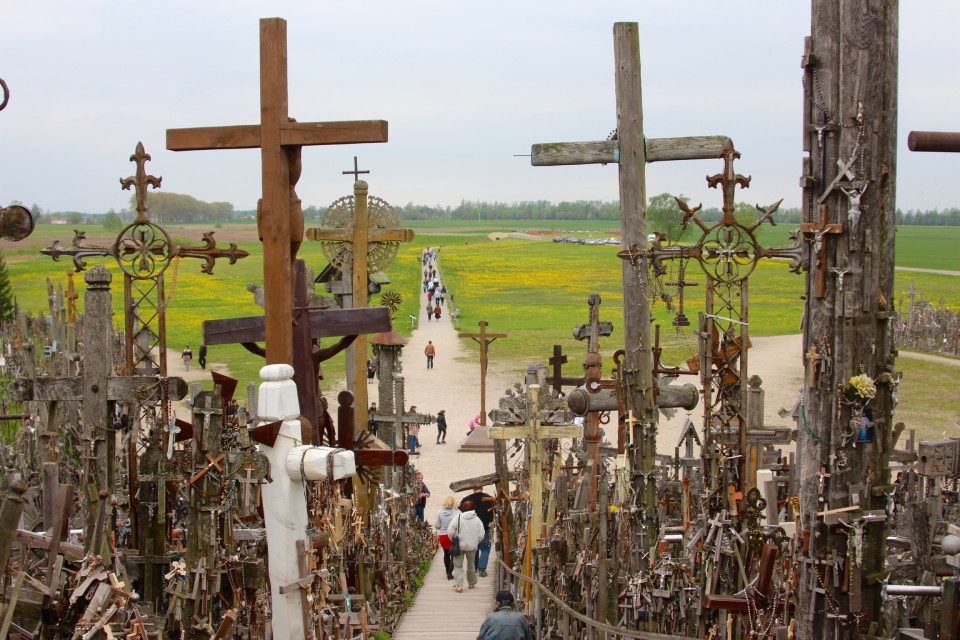 I kneeled down in the mud-soaked grass, I wrote my son’s name on the cross with a Sharpie. I found a spot and buried it into the ground. What an honor! He was now a part of history; I have entered him into God’s story in Lithuania. For those who suffer and the ones lost. 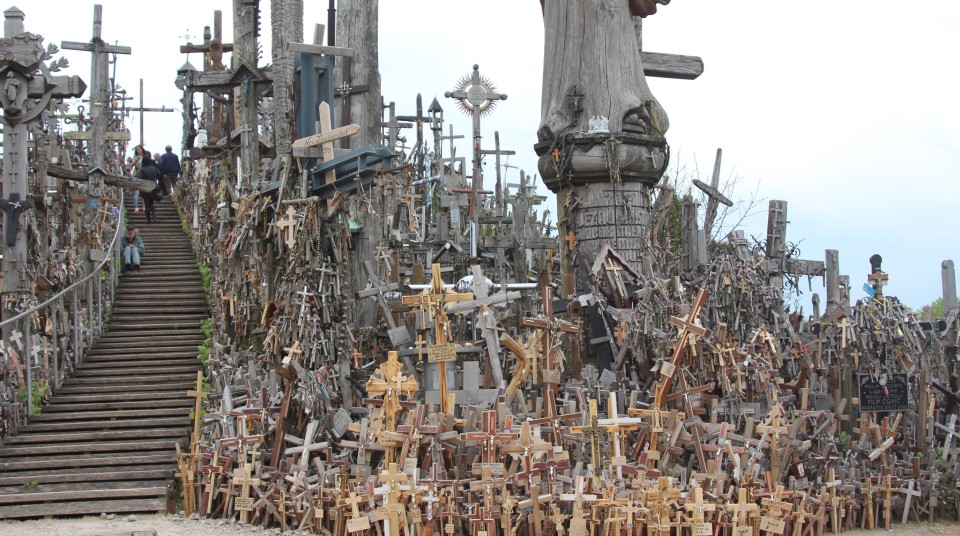 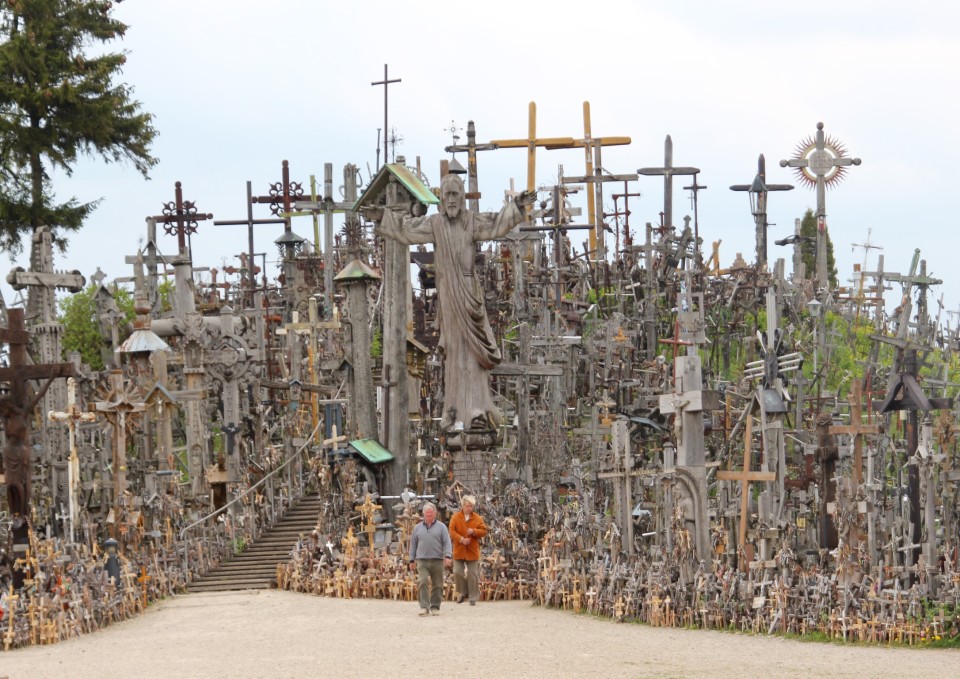 How to get to the Hill of Crosses

Take a tour with Jayway Travel

On this trip, I started in Tallin, Estonia, and did a three-country tour through the Baltic Capitals: Tallinn, Riga, and Vilnius with Jay Way Travel. Considering the hassle it is to get to the Hill of Crosses, I think this is the best way to get here! The Baltic countries are small, so it is easy to see all of them together.

When you do this tour, a private driver will pick you up to take you to Lithuanian’s capital of Vilnius. Along the way, they break up the drive with a few stops. First, we explored Rundale Palace while still in Latvia. After we entered Lithuania, we made a short stop Hill of Crosses. It is a UNESCO world heritage site. So it was on the way between Riga and Vilnius.

The best part of this tour is that they dropped us off right in the front of the Hill Crosses and gave us an hour or so to walk around, take photographs, and to enjoy exploring on our own.

Another option is the Bus or the Train

It takes time to get to the Hill of Crosses since this Northern Lithuanian sight is located far from the city center of Šiauliai, where it is located. In fact, it does appear to be in the middle of nowhere. So if you make it to Šiauliai, then you will have to take several buses to get there.

You can take a bus or a train from Vilnius to Šiauliai. But it does take about 2 1/2 hours to get there.

Take the Šiauliai–JoniŠkis bus from Šiauliai bus station, then get off the bus at the 3rd stop. The name of the bus stop is DOMANTAI. From here it takes less than half an hour to get to the Hill of Crosses. Then follow the signs for “Kryžių Kalnas” until you see “The Hill”.

So see why I think it is better to go with Jay Way Travel?

This article is a continuous series on the Baltic Capitals:

#1. Tear Down That Wall – Freedom for the Baltics

#2. Tallinn, Estonia – Vibrant Capital on the Shores of the Baltic Sea

#3. A Medieval Gem – The Schlossel Hotel in Tallinn, Estonia

Pinners!  Pin this one:

Disclosure: My time spent in Lithuania was courtesy of JayWay Travel. I can recommend them for the services they provide, their attention to detail, and their planning of my trip. My pain that day on “The Hill” was all my own, but I would jump at the chance to return.

Reading your wonderful article makes me even sadder that we had to cancel our trip to Lithuania this year because of Covid-19. We hope we can make it next year!

Beautiful story, thanks for sharing. I had not idea this fantastic place existing!

Yes, it is such a humbling place... thank you.

Fascinating! I really need to go see this place! And I love that you added your own cross. Such a special memory!

Yes, it is quite amazing, did you see I added Johnny Blair's account of his trip here, it was quite different than mine, yet fascinating! Just so you know, there is a luxury bus out of Riga to Lithuania and I am sure Charles of JayWay Travel can give you more info on this.

Thanks Miss Carol, it was a touching place!

It is an awesome experience!