Getting to know Jamaica‘s exact location will help you discover why its offerings of deliciousness are so diverse. The tropical country of Jamaica is located in the West Indies of the Caribbean Sea, directly underneath Cuba and to the right of Mexico, and to the left of Haiti. This country has been inviting guests from around the world to try its flavors, as well as its Jamaican desserts, all while enjoying a tropical adventure in the sun with a splash of reggae culture.

Jamaican Desserts to Die For! 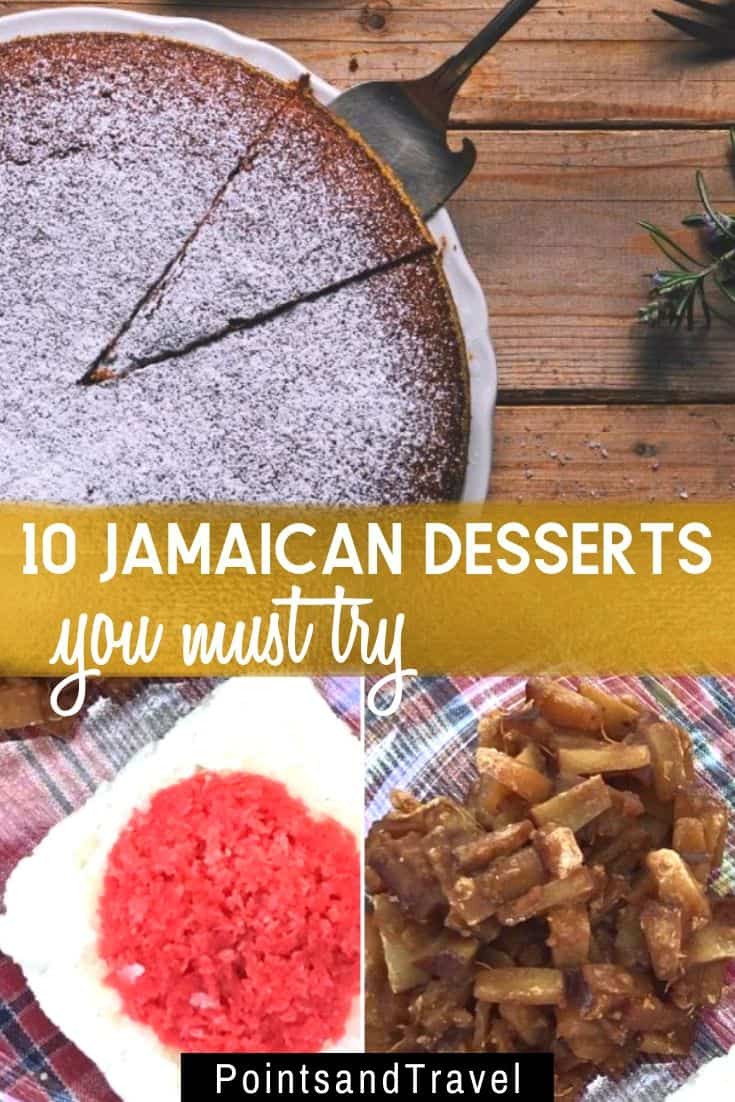 And since a country’s culture is heavily based on the cuisine that it presents to its visitors, I can tell you that Jamaica does not skimp out on its offerings of all things sweet. Home to the famous Jamaican cakes: Black Cake, Jamaican Rum Cake, and Grater Cake. These amazing cakes are a few of the reasons that people keep coming back to visit Jamaica (other than the stunning beaches, of course). Read on to learn more about the best Jamaican desserts that you must try!

When it comes to the most delicious Caribbean cuisine, Jamaica takes the cake (literally). Some of the best cakes in the world were created on this small Caribbean island! I saw and tasted several versions of this same cake, and though many had different names, they all seemed to contain a few of the same ingredients. The Jamaican Black Cake is related to the many rum cakes that are popular in the Caribbean. Although, this cake is thought to have originated with the British colonists who brought their recipes with them for fruit puddings. The British overtook the Spanish in 1655 AD and gained control of the island until 1962. It was during this time that the Jamaican Black Cake was born. 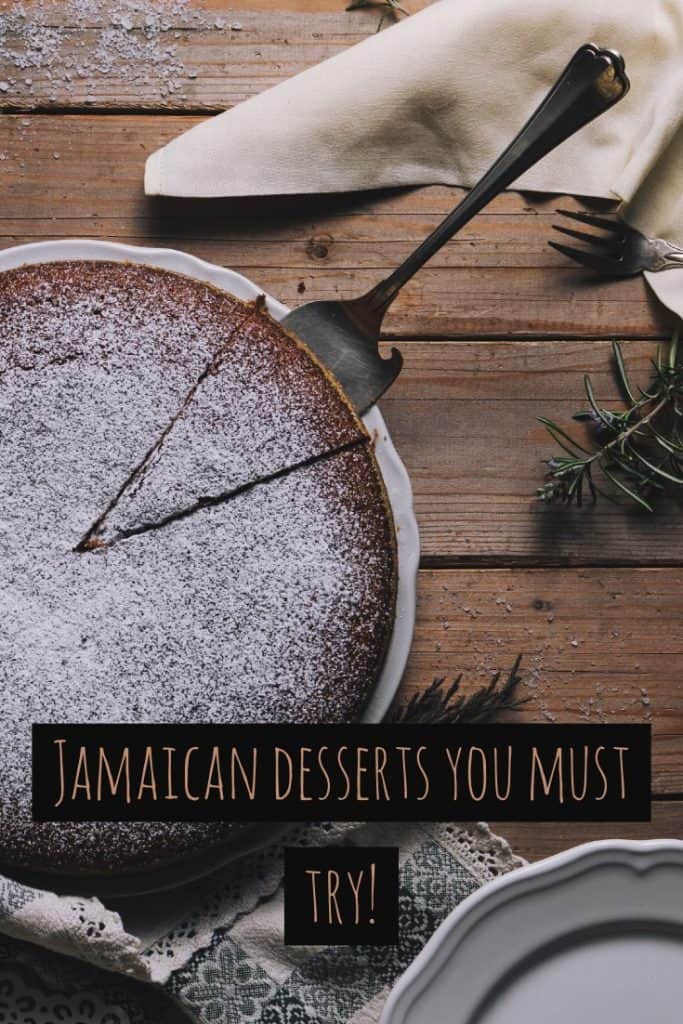 While many of the desserts in Jamaica are considered fruitcakes, there is only one true Jamaican Fruit Cake. The real Jamaican fruitcake is usually made around Christmas time and is similar to the Italian Panettone. This fruitcake combines burnt brown sugar, cinnamon, cherries, and prunes to create a mouthwatering snack. I have posted a Jamaican Black Cake recipe at the bottom of this article for you to try out.

Boil Red Label wine for 2 minutes. Let cool then use it to blend prunes and cherries. Let it soak for two days.

TIP: To get the BEST airfare deals to Jamaica, use Travelocity’s calendar to see if alternating your travel dates will save you cash.

The Rum Cake Jamaican typically infuses rose water, vanilla, lime rinds with blackberry brandy or sherry and/or rum. Most Jamaicans soak their fruits in rum for days, months, or years depending on what their preferences are. 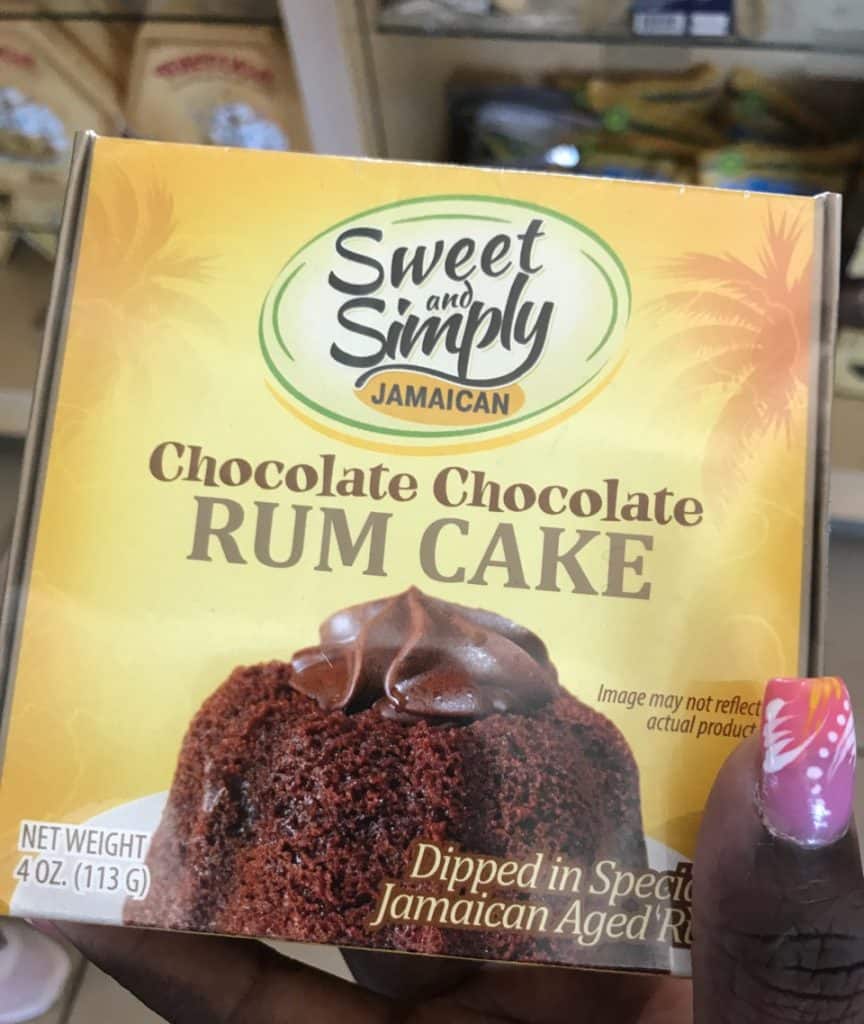 ✦ Speaking of all these Rum Cakes, I am sure you want to try some good old Jamaican Rum! Check out my article about 10 Must-Try Jamaican Drinks (including Non-Alcoholic) that are popular in Jamaica.

Another scrumptious dessert is the Jamaican Sweet Potato Pudding. Many would not find potatoes and yams in a dessert dish, but only Jamaica can make this Thanksgiving-like dish into a sweet pudding. One of the best Jamaican Sweet Potato recipes can be found here. This pudding is called “Hell a top, hell a bottom, Hallelujah in the middle!” by many Jamaicans. The meaning of this phrase is found in the method of cooking. The pudding is baked in a dutch oven with coals on top of the pot and along the bottom of a coal stove. That’s the traditional way of making it, and that’s how it is still made in Jamaica. 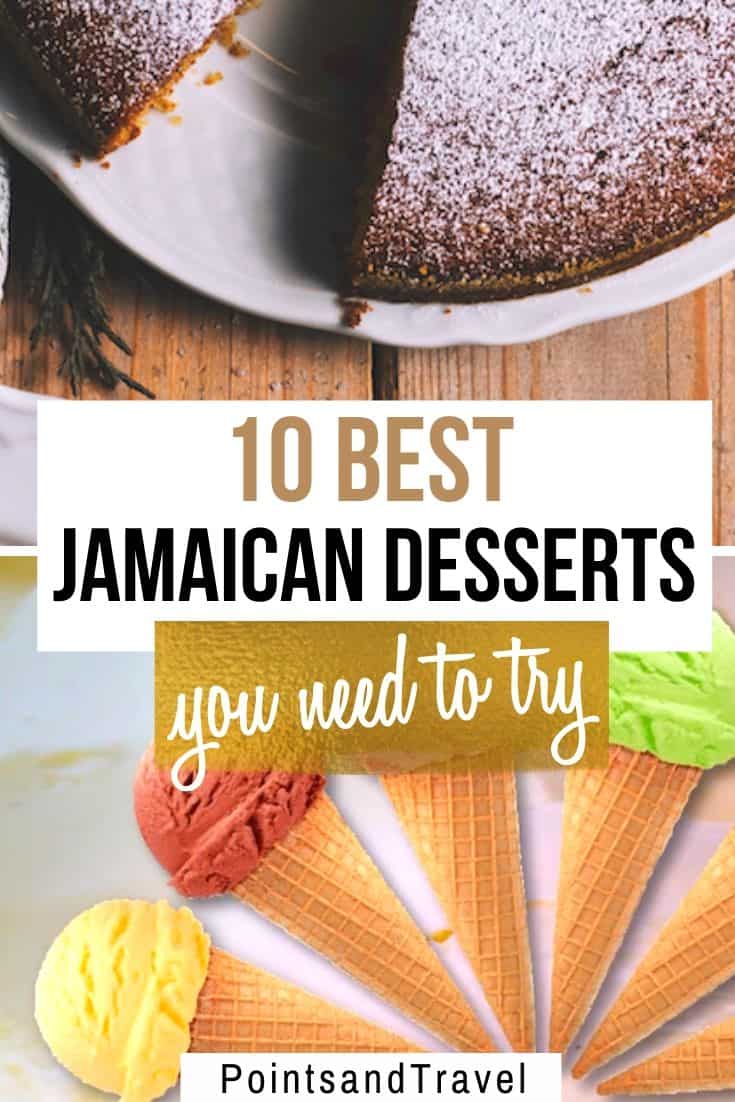 Then, of course, there is the Jamaican Easter Bun, this bun is usually made with currants or raisins, with a large white cross over the top of the small square pastry, probably due to the traditions of the colonization from England of the Christians. This small square English bun has morphed into a large fruit-filled bun, shaped like a loaf of bread. It is typically eaten with a chunk of “red cheese” that comes in a can and is called Tastee Cheese. 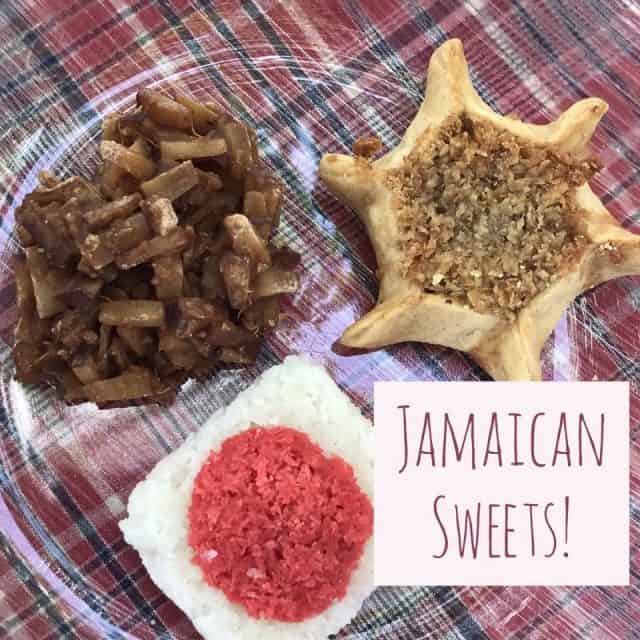 From the top left: Coconut Drops, then the Gizzada, and the Grater Cake at the bottom

Coconut Drops, also known as Cut Cake, is a Jamaican dessert that is made from cut up pieces of the meat of coconut (as the name implies), as well as ginger and brown sugar. It is mixed together and boiled until it becomes sticky and then beaten with a wooden spoon. It is then dropped on a greased cookie sheet until it cools and becomes hardened.

Gizzada, also known as a Pinch Me Around, is a puff pastry filled with coconut. It is a tart that is contained in a small, crisp pastry shell with a pinched crust and filled with a sweet and spiced coconut filling.

Grater Cake or Drop Pink Cake is a Jamaican dessert that is made with dried coconut, granulated white sugar, and water that is boiled together. The grater cake has a very high sugar content. Once boiled, then 1/2 of the mixture is poured out on a greased cookie sheet. The other half is dyed with pink food coloring and then also poured out on a cookie sheet. Once both are dried and allowed to cool, then the pink portion is rounded and put on top of the white portion that has been squared.

Here is the best Grater Cake recipe I have found:

Jamaican Bulla Cakes, also known as a bulla, is a cake made from molasses, flour, and baking soda, with ginger and nutmeg as its spice. It is typically dark in color and like a flat and round loaf of bread. Very often it is served with cheese, butter, or avocado.

Blue Draws, also known as tie-a-leaf or Dukunoo (I found several different spellings of this word) is a popular Jamaican dessert made on special occasions. Basically, they are bananas, coconuts, and sweet potatoes, along with flour that is mixed up sugar, coconut milk, and spices and then wrapped in a banana leaf and then tied. The Banana leaf is said to give it a good flavor, but it can also be wrapped in aluminum foil or parchment paper.

Devon House I scream (ice cream) is the best place on the island to get ice cream according to our guides! Especially if you want to try some flavors of the island, like rum and raisin, stout beer, or chocolate! At this ice cream shop in the courtyard of Devon House —built 130 years ago by George Stiebel, the island’s first black millionaire—crowds gather nightly to get a chance at some unusual flavors of ice cream!  They also serve tropical flavors like soursop, guava, and sorrel. Just-picked island fruit makes the ice cream taste fresh and delicious!

Whisk together sugar, salt, and egg yolks in a pan until smooth; stir in cream and cook, stirring constantly, over medium heat for about 4 minutes. Pour mixture through a fine strainer into a medium bowl and whisk in stout and vanilla; refrigerate until chilled. Process in an ice cream maker. Transfer to a plastic container and freeze until firm, at least 4 hours.

There is no overindulging when it comes to tasting the best desserts in Jamaica!

There is no doubt that this article has had you yearning to book a trip to Jamaica. There is no shame in wanting to try the best cuisine in the Caribbean, so start by cooking up some of these Jamaican desserts before you eat the real deal!  Your taste buds will explode with desire with every morsel of the best Jamaican desserts.

Recommended Reading About A Trip To Jamaica:

Disclosure: As is common in the travel industry, I was provided with accommodations, meals and other compensation for the purposes of review by the Jamaica Tourist Board in conjunction with Blogilicious. While it has not influenced my review, PointsandTravel.com believes in full disclosure of all potential conflicts of interest. All Photos were taken by the author/or were given permission from the photographer. Affiliate links are located in this article.