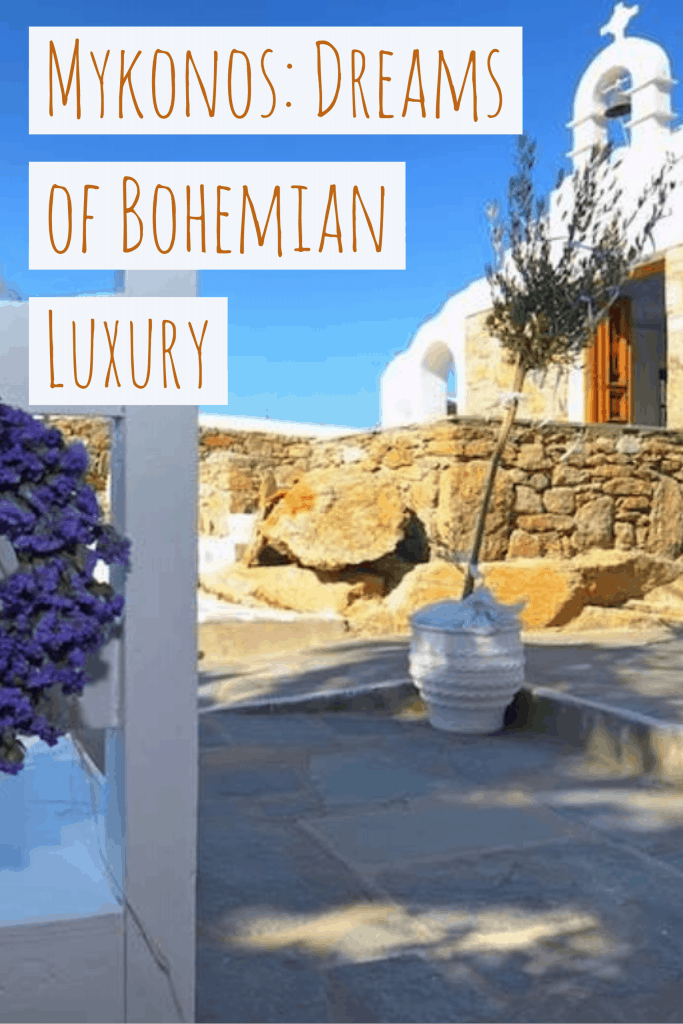 So you are going to Mykonos? Mykonos is loaded with great beaches (and churches) and in my humble opinion, they have some of the best beaches and towns in all of the Greek empire, including the Mediterranean. Mykonos beaches are a paradise whether you’re looking for swimming, sunbathing, beach parties, or any type of water sports. You can visit the Mykonos beaches throughout the day by renting a car/moto (like I did), by taxi boat, or by riding the local buses to get there. The buses run often and pick up until late into the evening in the summer.

What are the best beaches in Mykonos?

And just so you are familiar, most of the best beaches on Mykonos are located along the southern coast of the island. As it gets super windy in the northern part of the island in the summer months of June, July, and August. Let me give you a rundown of the island’s favorite beaches along the Southern Coast. 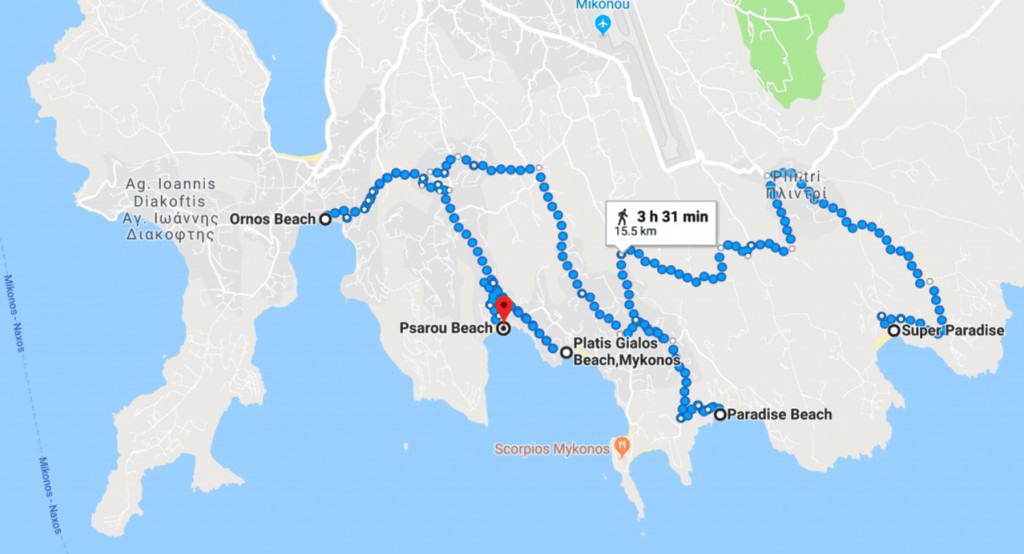 Mykonos beaches such as Paradise and Super Paradise have a lot of cool bars and loud music and are known as the “party beaches”. They are considered the most popular beaches in Mykonos. Tons of late night and early morning partying with international DJ’s that are flown in from around the world to the jet-set lifestyle and predominately gay men visitors end up here. It is also considered the best gay-friendly beach in the Greek Isles. Paradise beach is a sandy beach with everything from diving and snorkeling to any type of water sport. It is also nudist-friendly. Super Paradise has golden sand and is considered one of the busiest beaches in Mykonos.

If you want to stay near Paradise or Super Paradise beaches, I can recommend:

For families and couples, the Mykonos Beaches of Ornos and Platys Gialos Beaches are great. Ornos Beach is located in a bay and is a quieter beach than Paradise and Super Paradise Beaches. But that is not to say that it doesn’t get busy! It is set up already with beach lounges and umbrellas, as well as cafes and beach bars, so all you have to do is show up! There is plenty of water sports available here like windsurfing and water skiing, as well as paddleboards. 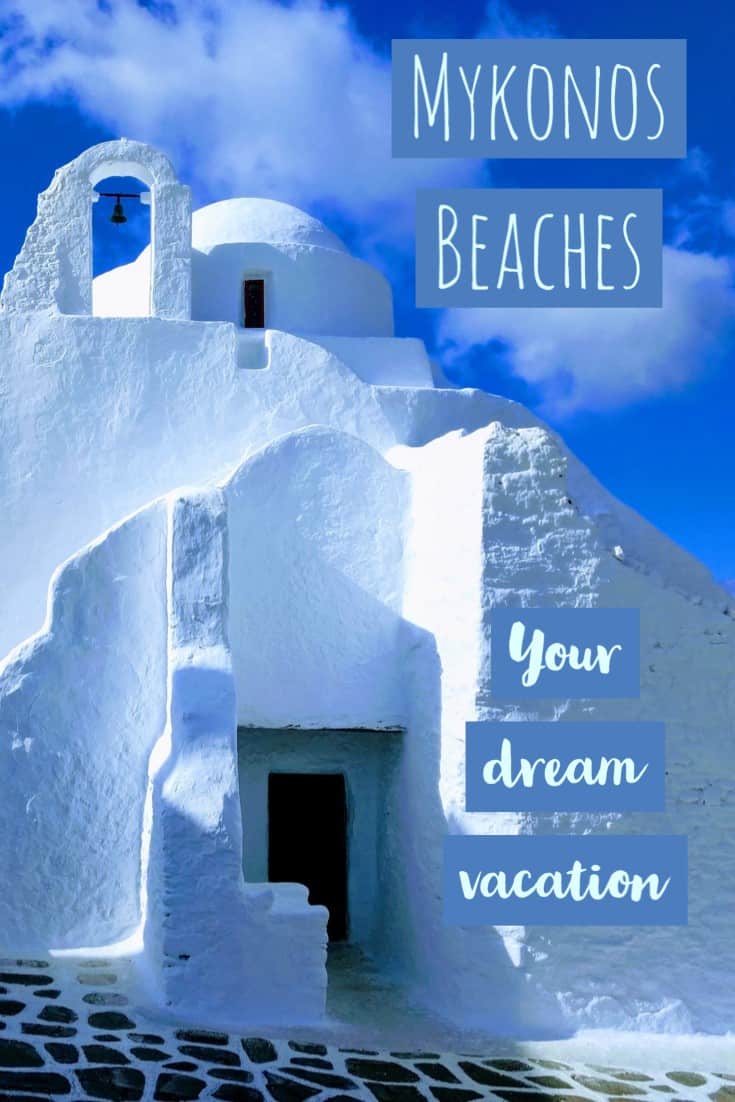 Psarou can easily be considered to be the most cosmopolitan of all the Mykonos beaches. Be on the lookout for jet-setters and celebrities. Psarou Beach is almost always calm from the wind, even when the wind is just around the cove. This tranquil cove is easily accessible by yacht via a dock is just a few steps away from the famous Nammos, as well as other restaurants, beach clubs, and bars.

If you want to stay near this beach, I can recommend: 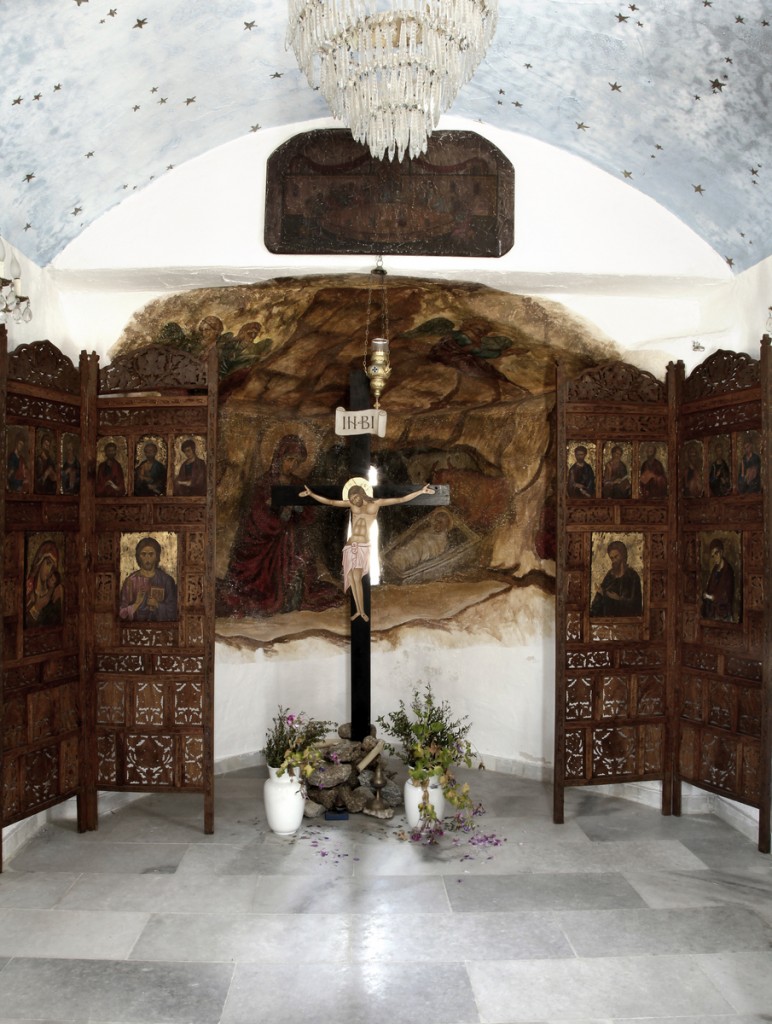 Best Beaches in Mykonos: The Island of the Winds

Known as the Island of the Winds, Mykonos Island is in the Cyclades group of islands in the Aegean Sea. It is also known for its summer party atmosphere where hip Europeans come to spend lazy days of summer partying like they have nothing else to do but give themselves up to their raw emotions. With massive dance clubs that attract world-renowned DJ’s and clubs that stay open well past dawn, this place is one massive party from June to August.

But what are the best Mykonos Beaches like during the shoulder season? For me, it is pure bliss. Mykonos beaches are some of the most gorgeous ones in all of Greece and I couldn’t wait to explore this tiny island for the very first time.

This reminds me to tell you something about Mykonos you may not know: Mykonos Island practically shuts down from October to April! This was something I had no idea about, so be sure and plan accordingly when going to Mykonos and its gorgeous beaches. I personally prefer the shoulder season which is either before the island gets revved up in late April/May or when it is winding down in Sept/early October. That way you can enjoy this gorgeous paradise all to yourself! Otherwise, get ready for the crowds of tourists who visit here every summer! 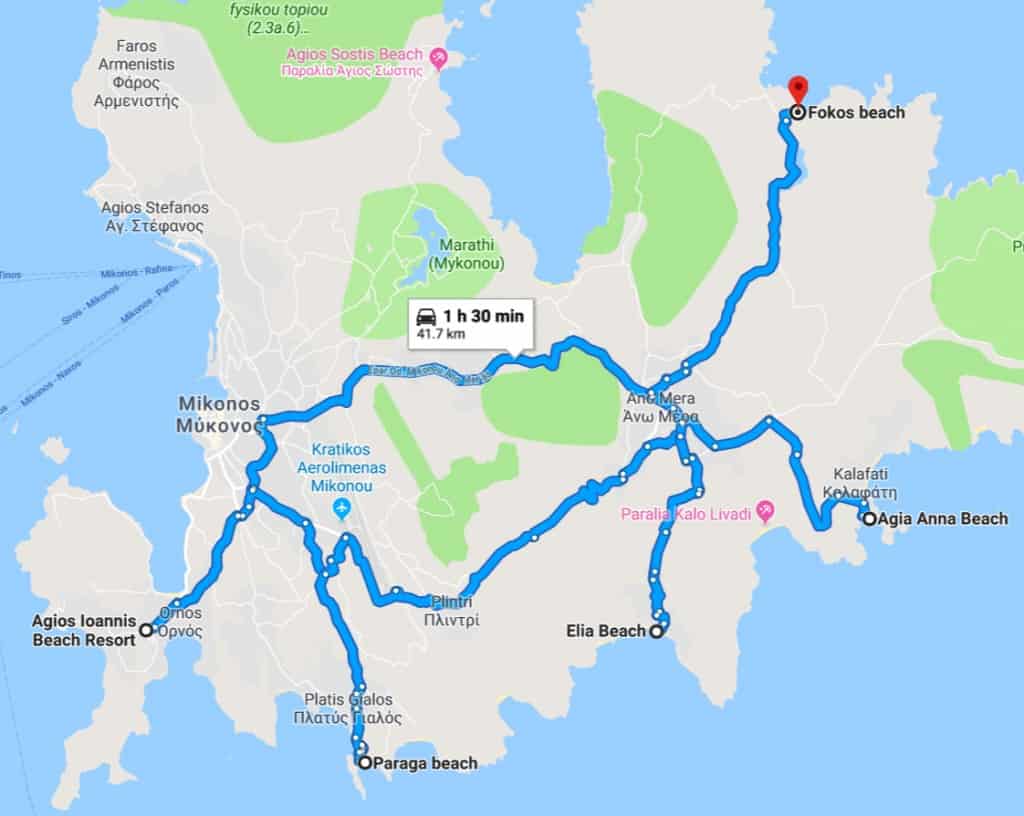 Agios Beach is a narrow beach that may be too secluded for some people. However, there are direct buses in high season from the Mykonos town stop. Lesser-known Agia Anna Beach is also a quiet beach with one very good restaurant, ok maybe two very good restaurants. It is an easy walk from Paraga Beach and Platys Gialos Beach.

If you want to stay near Agios Beach, then I can recommend:

Paraga Beach is close to Paradise Beach (a 15-minute walk away) and is near the San Georgio Hotel that I wholeheartedly can recommend. A narrow piece of land that projects from the coastline into the sea separates the two sandy beaches of Parag. That allows visitors two options –  the southern side of Paraga Beach is quieter. The Northern side is busier, but also offers water sports and tavernas. So take your pick!

Elia Beach is considered the longest beach of all the Mykonos Beaches. During the summer months, there are 5 buses a day from the town of Mykonos to Elia. There is also a boat from Platys Gialos to Elia. For me, there was plenty of parking at this beach.

If you are looking for the most secluded beach in Mykonos, you have probably found it in Fokos Beach. No taverna, no parking, no activities, but if you want quiet and alone, this is the place for you. 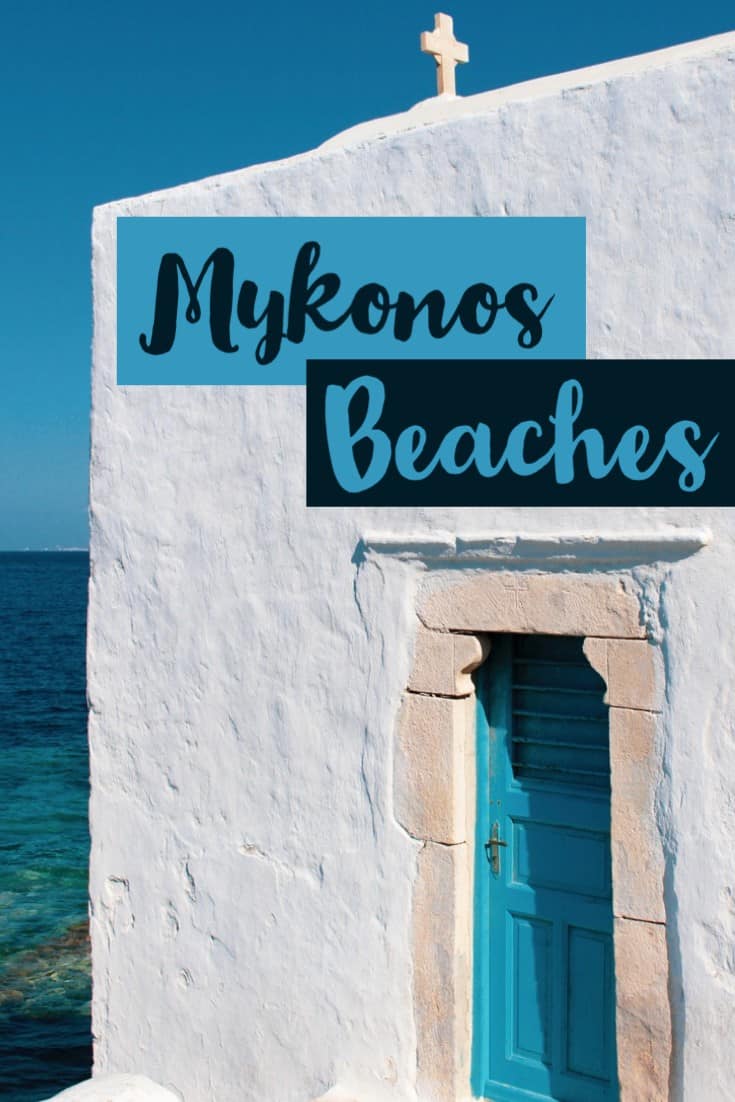 Lia Beach is similar to other beaches, as it has two sides: left and right. The left side is managed by Andreas with blue sunbeds and red umbrellas. The right side is managed by Liasti. Andreas also has a taverna set back from the beach before the entrance to Liasti’s car park. On both sides, there is a full beach service so you can order on the beach and have it delivered to your sunbed.

This is NOT a family beach, so keep that in mind when you visit this beach. It is a gay and nudist beach. It is, however, a very pretty beach, just don’t bring your kids if you don’t want them exposed to nudity or other shenanigans going on at this beach. I have heard from several others that the music is simply too loud here, so keep that in mind,

This beach is one of the least visited beaches, as even though it is the closest beach to the town of Mykonos, people tend to avoid it because it is extremely windy, has no umbrellas most likely due to the strong winds, and there are often groups of school kids here for excursions. 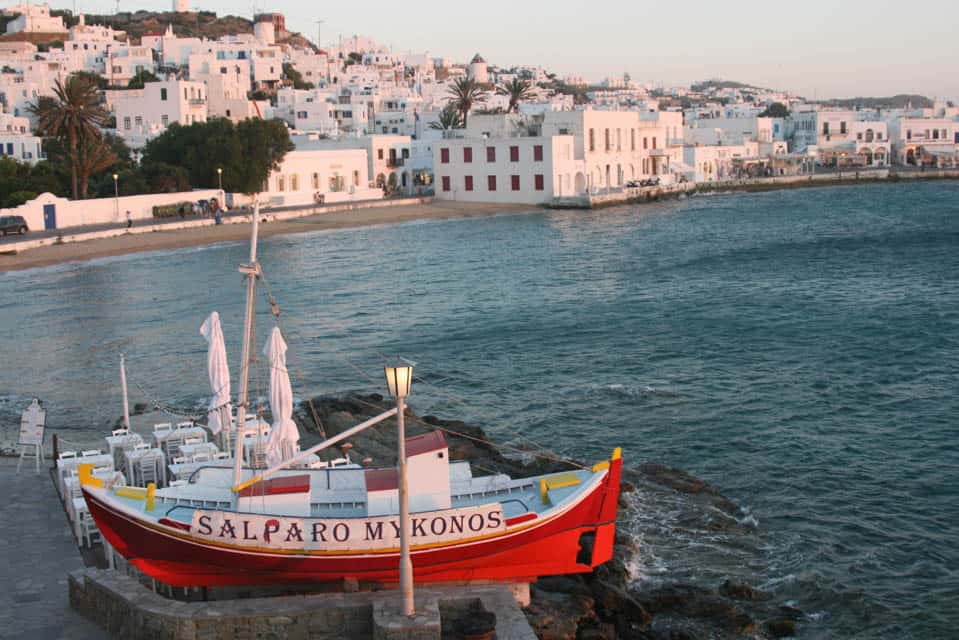 Where to Stay in Mykonos for Bohemian Luxury:

“She stood in the doorway and heard the mission bells’ ring.”

The moment I stepped into Soho Roc House, I knew I was in the right place. This place is downright dreamy. And honestly, it was exactly what I had been dreaming about most of my life when it comes to a beachside paradise. 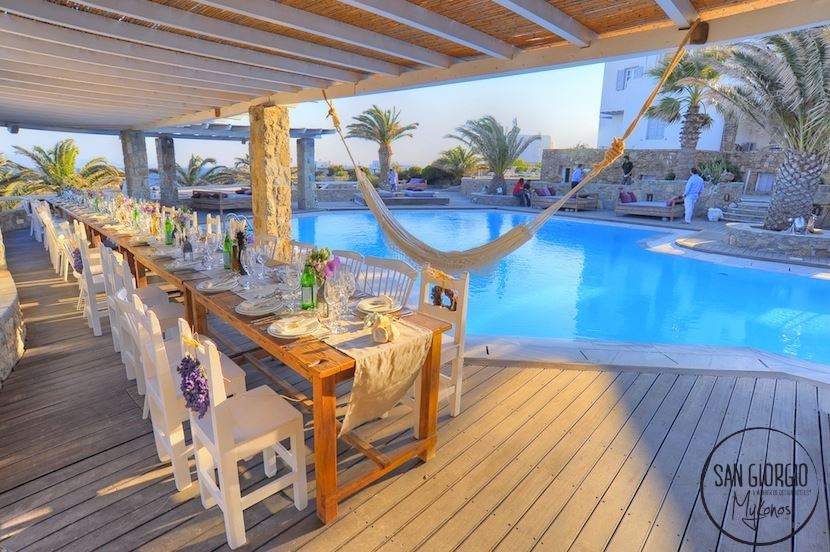 Mykonos Beaches: There is No excuse, Just do it.

When I dream, I see a place like Soho Rock House. She had me at “hello” on one of my late-night internet searches, with her boutique rooms that overlook the San Giorgio Beach (its’ tiny) on the Mediterranean island of Mykonos. This place was designed for those who seek simple pleasures. So eventually, I made it there: 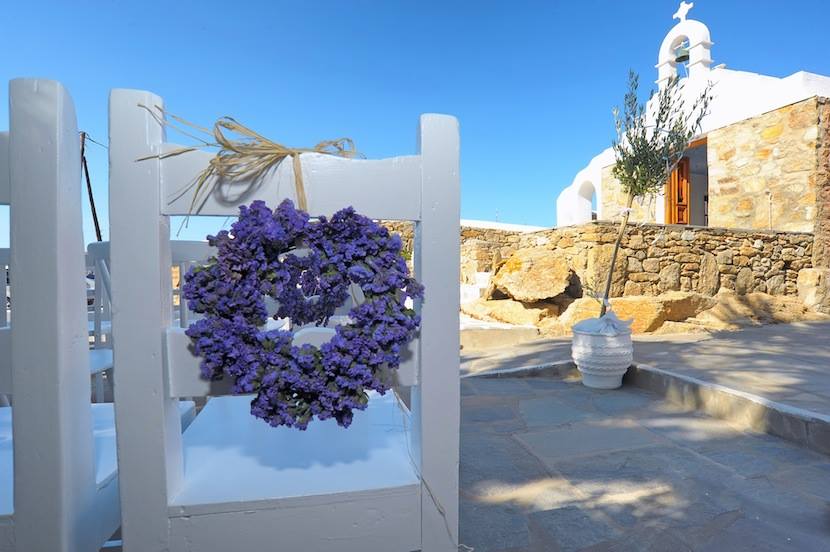 I feel welcome in this place like it is my home, not a hotel. You will fee the same. 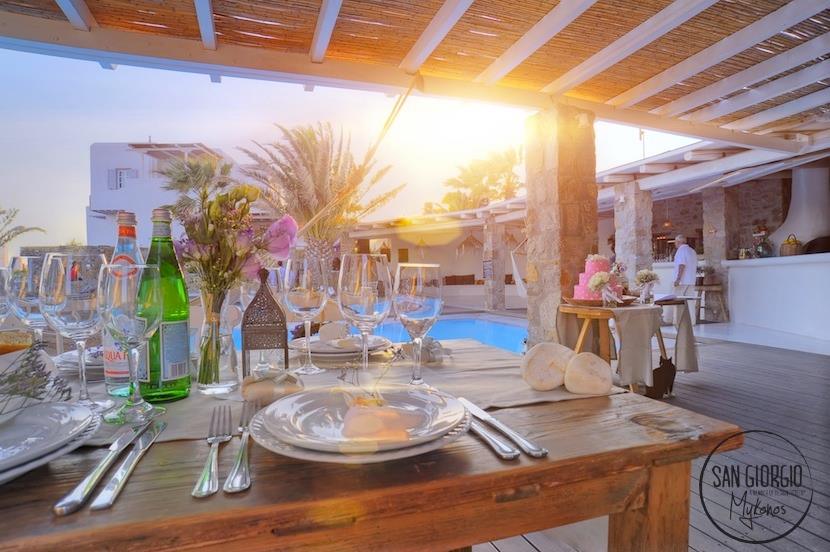 I had experiences here that I will remember forever, for one day I will be too old to come and enjoy this deep blue sea in faraway lands. 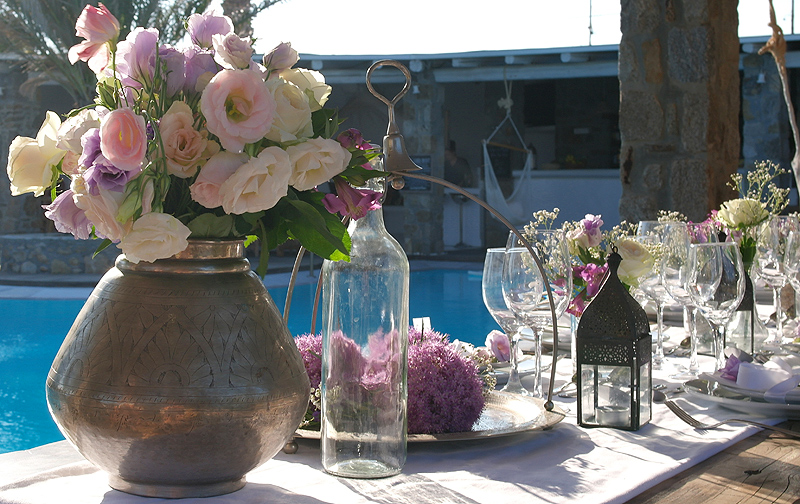 I will never forget my time spent here. 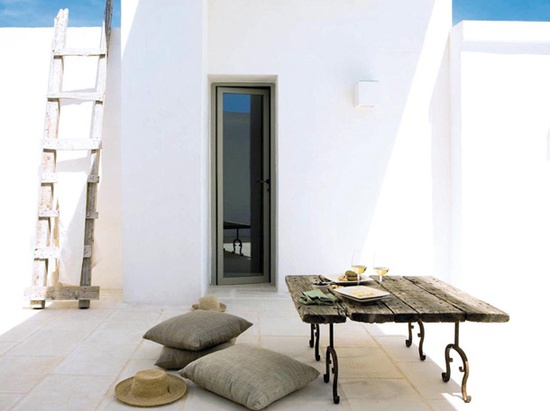 Life here reminds me that this is the way life should be. 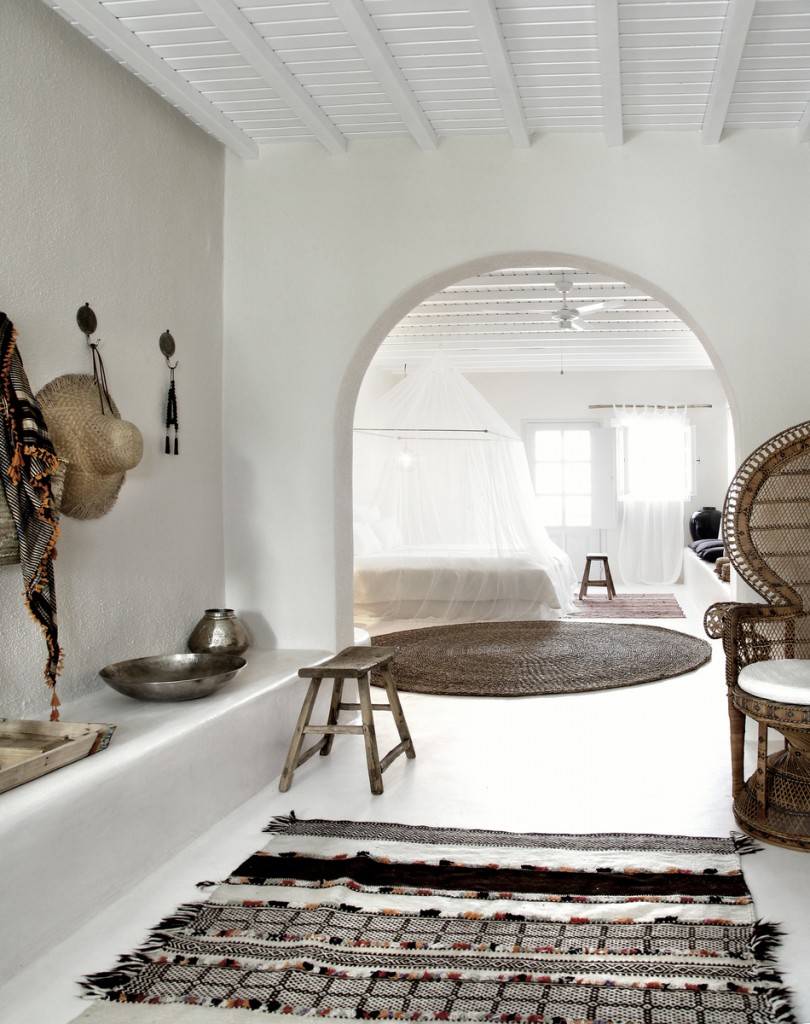 I stand at the entrance to this room, holding “a key, antique, and brass, in the shape of a cross and a star at the end that will fit perfectly into the keyhole that was shaped like a circle with a triangle underneath.”-Linda Heart 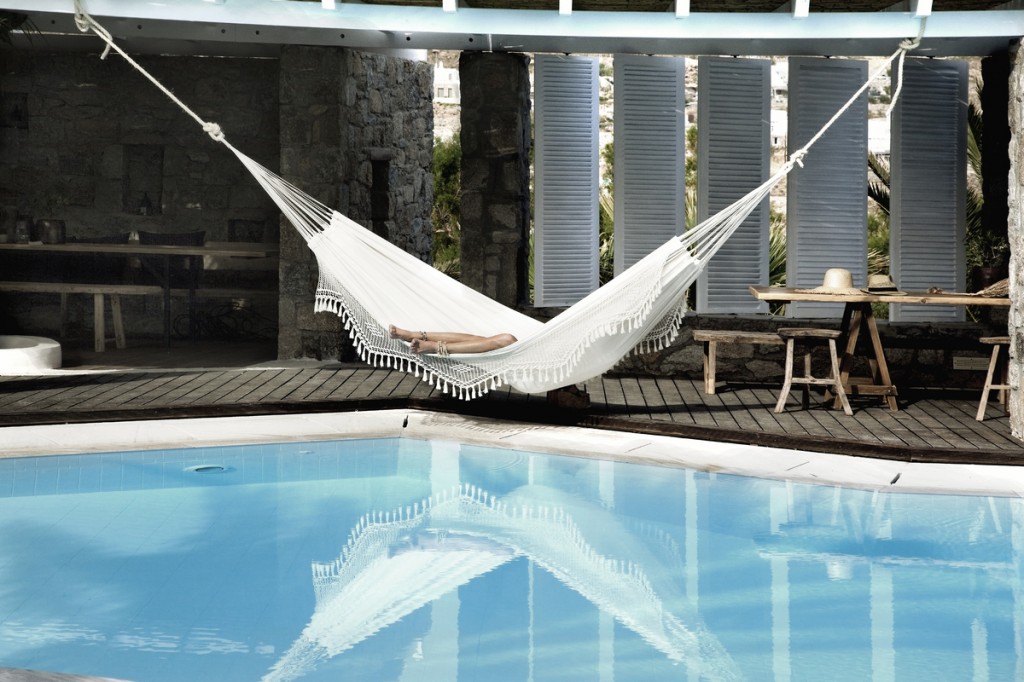 “What is luxury? Luxury for me is to say, okay, I’m doing what I really want to do.”
-Thomas Heyne

“Simplicity is the keynote of all true elegance.”
― Coco Chanel 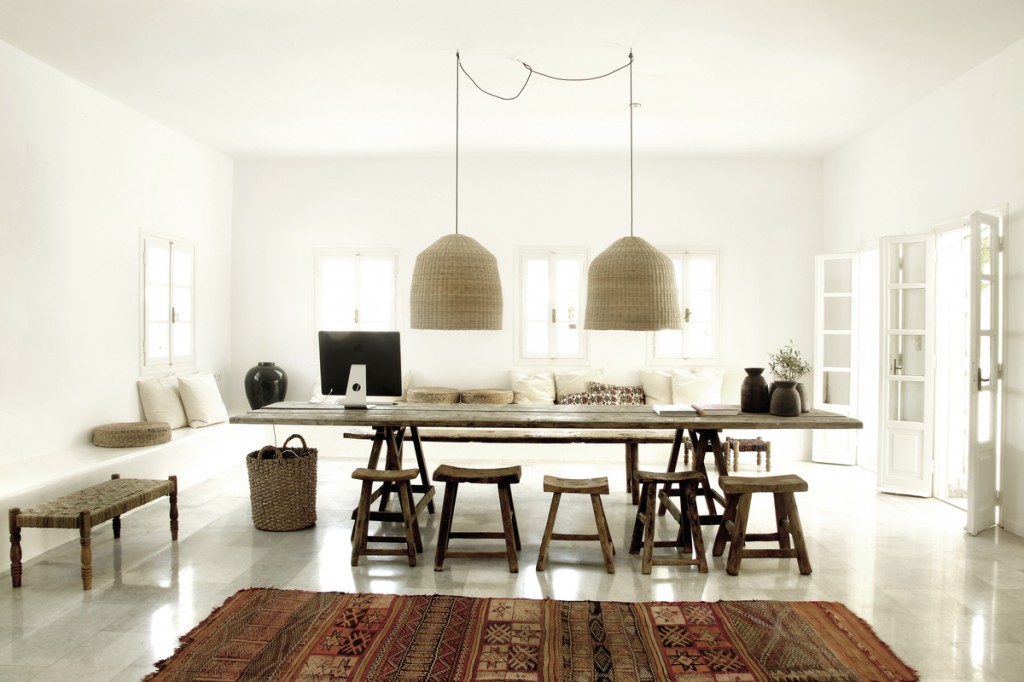 “You and your ideas are a bit too dreamy for me.”

I don’t care, let me dream! 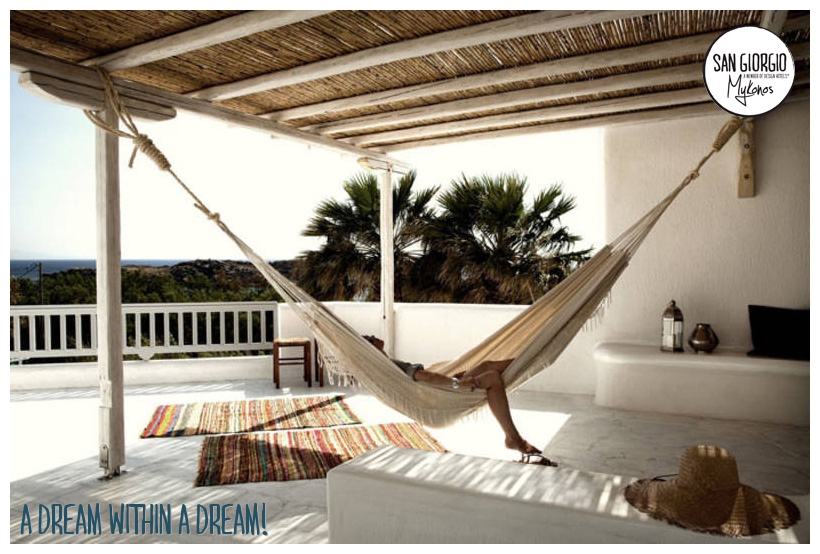 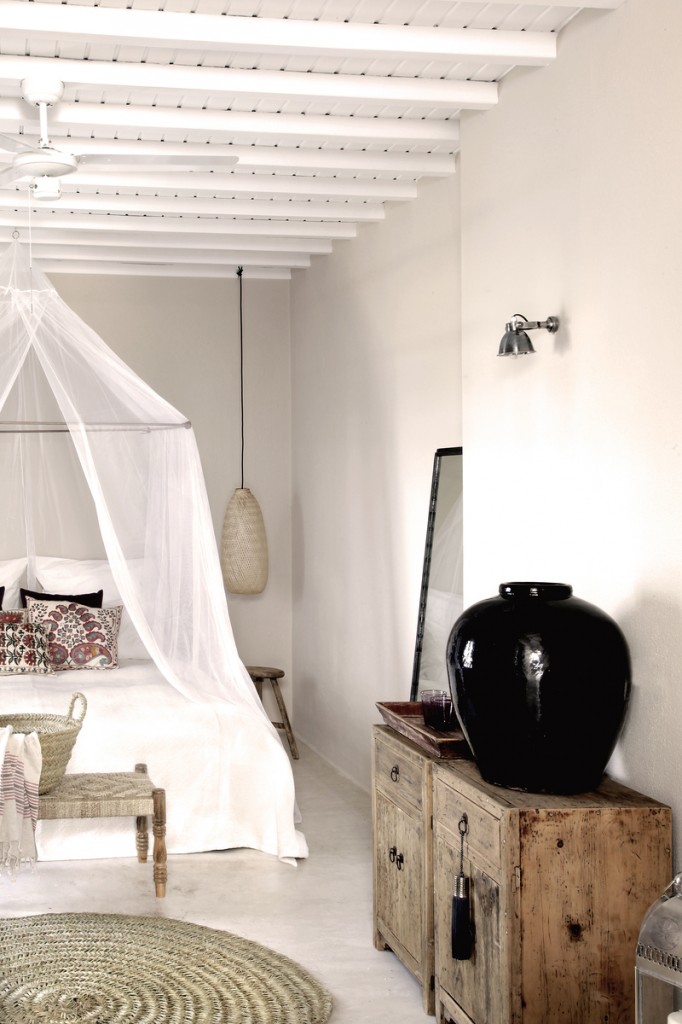 Other Recommended Reading about Greece:

Santorini Guide: 5 Things to Do

What a lovely place to stay, take me back to Mykonos!

Yes, it was lovely! I have not written extensively about the Greece trip that I took, although it was very special... but ready to go back for more!

Thank you for this well-written article!

Absolutely! That is fabulous news for my VALUE LUXURY readers!! Thank you so much for the information!

Beautiful photos :), a magical place to stay in!

Yes, the place is gorgeous!

What an inspiring post. I love the way you write about this dream. My wife and I have really wanted to make this trip happen the past two years, as well, but being parents it is a little more complicated to plan the trip. It's not as simple as saying "I want to go there, I will make it happen." I hope you will make it happen soon.

Thanks Lance, I know that I am older than you by reading your blog and so I have a few years on you to make it happen. But this is that one place that has evaded me for years and I don't know if this is the year, but I keep putting it out into the universe! Thanks for reading!!

What gorgeous blues and a fantastic place to stay!

I know, I constantly dream about those blues!