I not only like to travel, but I love to travel. So imagine my surprise when, even for me, I end up out of my comfort zone! Where on earth could this be? Where was I when I felt this was? It happened to be Montañita, Ecuador. It was just one of those places that made me feel a little uneasy. Montañita is a small beachside town about one hour’s drive outside of Guayaquil in Ecuador.

We were going to Cuenca and had some days to spare and so decided to make a short trip over to the Ecuadorian beaches that we had heard so much about. Instead of trying out the more affluent Salinas Beach, we decided to go for the more hippie/eclectic Montañita beach because we had the kids in tow and my husband wanted to go surfing.

I did a little bit of research on Trip Advisor and found that Montanita had a lot of surf schools and since my husband wanted to go surfing, I found and booked a place for us to stay for a few days before we made our way up to Cuenca on our trip to Ecuador. 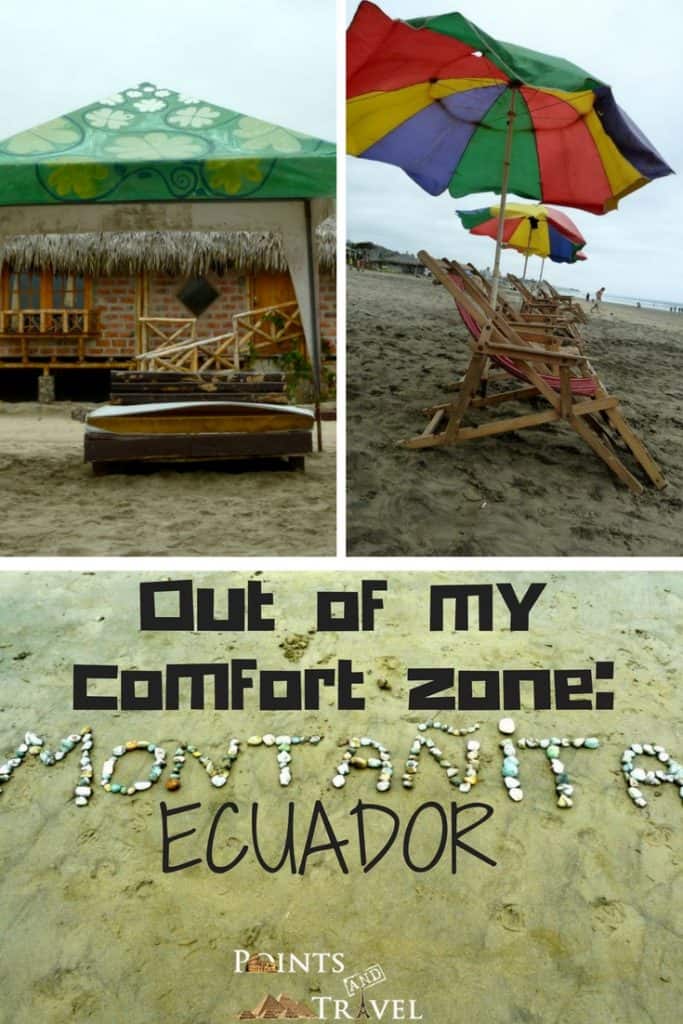 As you can see from the photo below, while we were driving on the road to Montañita, this is what we started to see! Yikes! Once I saw all that trash and crappy boats, I knew our vacation was in for some trouble (at least for me!). Yes, it is true, I saw THIS on my vacation! Yikes!

Why I can’t recommend a trip to Montañita, Ecuador

According to some who do recommend it, Montañita was supposed to be a “hot” surf spot, where all the local surfers go to catch some waves. My husband and kids wanted to try it out since they heard it was called a surfer’s paradise, too. To me, this place looked more like a backpacker/hippie’s paradise than it did to a luxury beach destination! Honestly, I was disappointed as we were driving closer and closer to this beach with all the trash, strewn along the highway.

It definitely was not what I was expecting, especially when I read this on the internet:  “Montañita is a hidden treasure that did not even appear on the maps just a few years ago, but the combination of perfect waves, golden sand, high tolerance among their locals and visitors and tropical vegetation has slowly developed its reputation as a tropical paradise.” – according to Wikipedia. Perfect!

So here I am, expecting a “hidden treasure”  with “perfect waves”,  “golden sands”, and a “tropical paradise”. OK, so I don’t know who writes for Wikipedia, but I think we have different ideas about what paradise is!! LOL

However, once you are in Montañita on the beach, there are plenty of things to do. They have quite an array of surf schools to pedicabs, as well as beach vendors with food carts, and even parasailing. This is one of those kinds of beaches where you have to pay to sit on the pre-arranged chairs with umbrellas if you want to sit. Otherwise, be sure and bring your own beach chairs and towels! We didn’t have any with us, so we just rented.

Apparently, Montañita is a Well-Known For Surfing

It was later that I came to learn that the origin of this crazy beach destination was from the psychedelic hippies back in the 1960s mixed with local fisherman! So now I can start to understand what the current reputation of this town is like now! It does sort of seem like a surfers hangout or a rowdy stag party! I will leave it up to you to decide! Montañita does have dark golden sand, so I can imagine that hippies would want to come to this “little hill” (Montañita) on the Santa Elena peninsula in Ecuador. 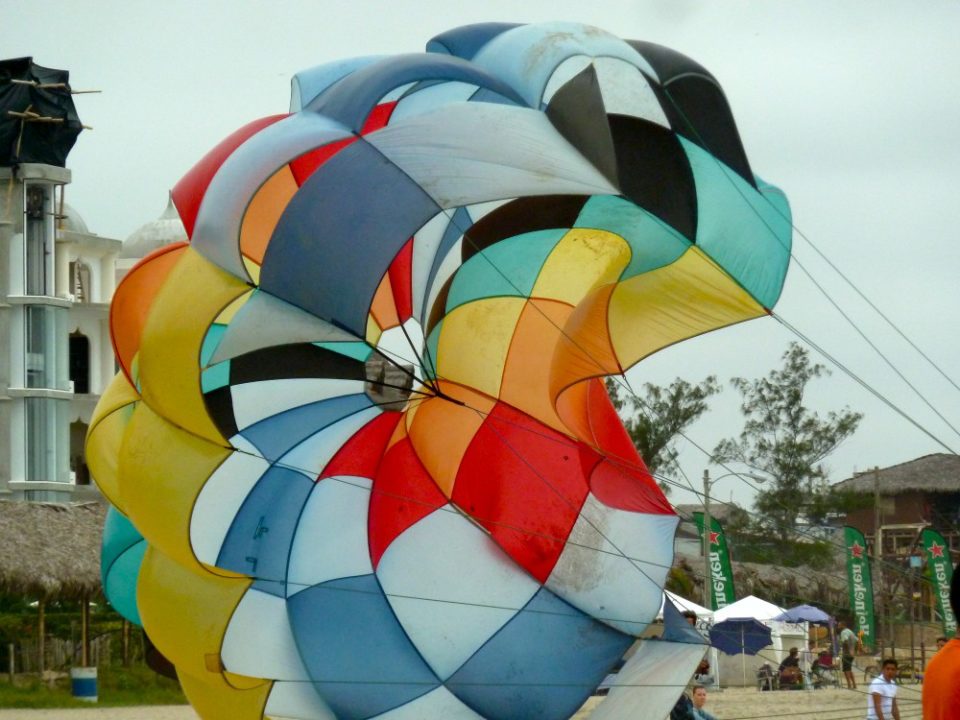 As it turns out, my husband told me he learned from his surf instructor that Montañita was one of the best places in Ecuador to learn how to surf. Each day, he and the kiddos would borrow a surfboard and head out to “catch a few waves”. Apparently, this beach attracts surfers from all over the world because of its consistent waves, especially during the Summer months.

He was told that in the Fall, the waves start to increase to over 6 feet or more! But in the Summer they are about 3 feet high, which is perfect for learning! They also have a lot of tubes of waves to glide through for the more advanced surfers. In fact, this place has actually earned a spot on the international surfing circuit which is typically held in February. Montañita is definitely an eclectic beach and town with many vendors and street performers.

The streets of Montañita are filled with bars, restaurants, and cafés, as well as banners of peace symbols and portraits of Che Guevara, John Lennon, and Bob Marley! So don’t be surprised if you smell a whiff or two of that substance that hippies like to smoke. The street performers come out almost every night from fire dancers to unicycle riders to everything in between. I do have to admit that they did entertain my kiddos, even if there were times I thought the performer or us might catch on fire!

Also, at night, while returning back to our bungalow after dinner, there were some unusual characters that washed up on shore, things like dead turtles and pufferfish!

Speaking of our bungalow, we did find one hidden gem in Montañita! It is called Balsa Surf Camp and I cannot say enough how it saved my heart, mind, and soul! When we finally found it, pulled up into the enclosure, I was ecstatic! It was nothing like the rest of the rough areas of Montañita and the chaos seen in the town near the beach. It was my oasis – these owners have done a great job to bring you a bit of paradise within this dirty town!

One of the best activities I did while in Montanita was to people-watch while my husband and kids went surfing each morning. There were quite a few interesting characters on the beach every day. This place appears to be a melting pot of different people who either love to surf, love to smoke, love to do nothing, or are somehow stuck here! Honestly, I couldn’t figure out the crowds!

The photo above was a guy who was just sitting and relaxing at a table in town when I was walking around taking photographs. He never even moved when I pointed my camera at him, he just stared at me! (He was probably wondering why I would want a photo of him!)

The Markets of Cuenca

Should We Retire in Ecuador? Exploring Cuenca, Ecuador

Quito: A Visit to the Middle of the World

Cultural Tourism in a City Upon a Hill: Quito, Ecuador

What is it really like to be on an Ecoventura yacht in the Galapagos?