Home » Destinations » Travel to the Middle of the World – Quito

Have you ever heard the words “Ecuador Mitad del Mundo” or “middle of the world in Ecuador”? I hadn’t either until I had a chance to visit the “Mitad del Mundo” right outside of Quito. I had no idea there was an exact location where you could stand at the earth’s midpoint – 0 degrees latitude, 0 minutes, 0 seconds in Ecuador! Apparently, people come from all over the world to stand in the mitad del mundo in Ecuador. I was lucky enough to have an entire day to spend taking a day trip from Quito, Ecuador to visit this crazy multi-location with my family.

Latitude 000: Travel to the Middle of the World! 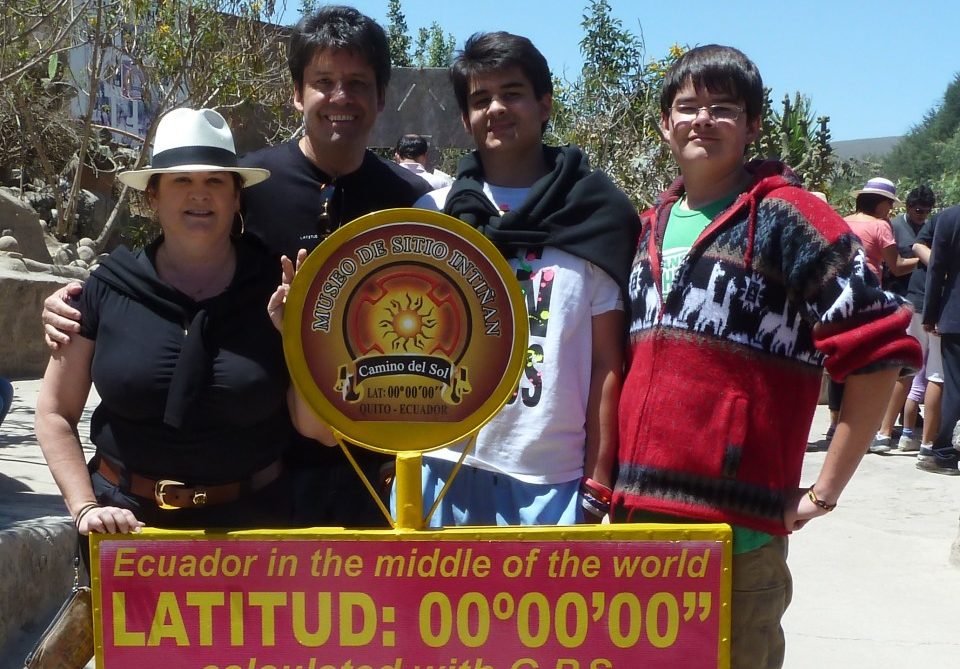 ✦ Where is Ecuador “Mitad del Mundo”?

This “Middle of the World” Ecuador location is on a tract of land located approximately 20 miles from Quito and it is easy to get there from there.

✦ How to get to the Middle of the World – Quito:

My family was visiting Quito and we hired a driver from the hotel that we were staying in Quito (faster and easier for a family of four). We hired him for the day to take us to the Pululahau Volcano, then to the Monument to the Equator dedicated to Ecuador “Mitad del Mundo” and finally to Intiñan Solar Museum, which is the exact equator line. (The funny thing is that the monument erected to commemorate the  Ecuador “mitad del mundo” (middle of the world) was actually built in the wrong location, but read on for a further explanation.) 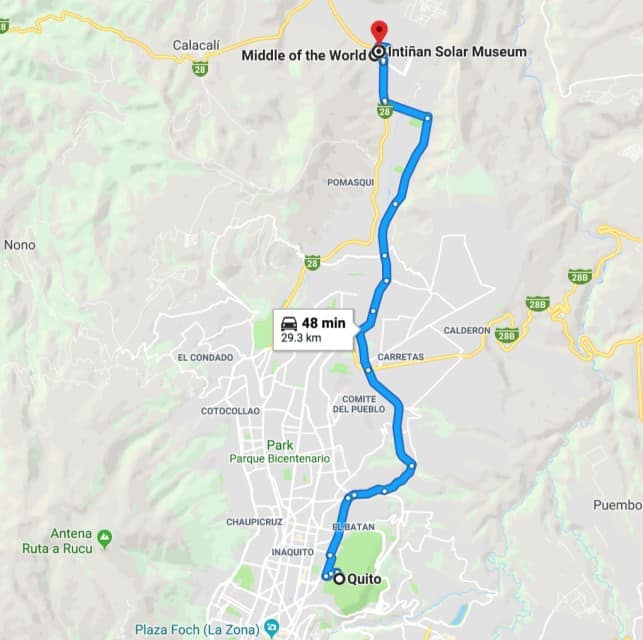 You can also take the public bus: 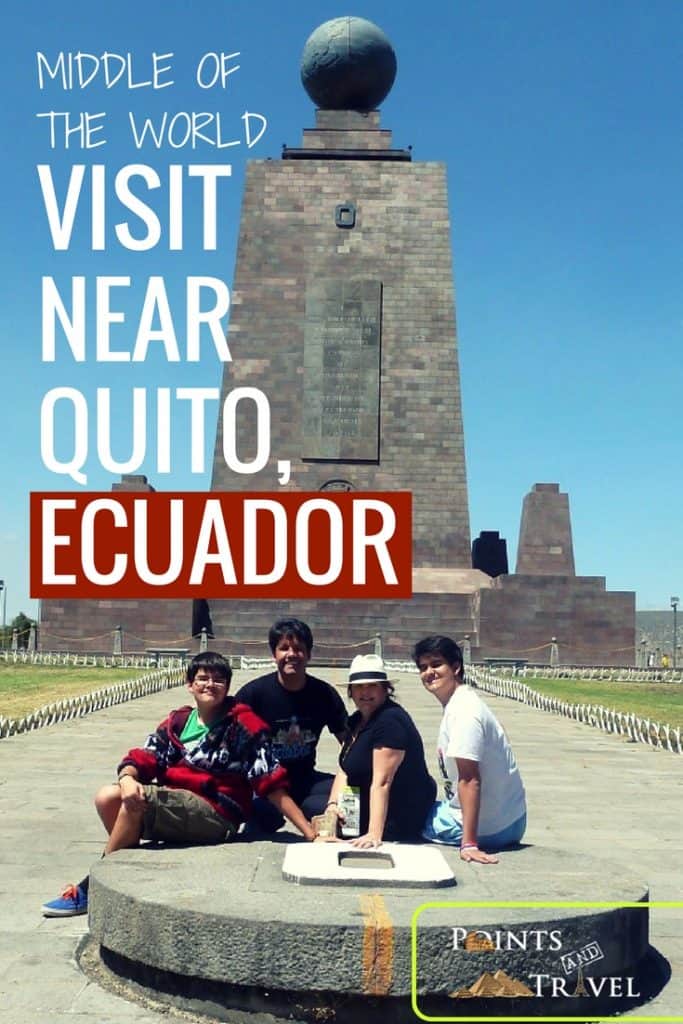 Our first stop was the Pululahau Volcano viewing spot. In the photo below, we are being blown away by the winds, with the inhabited volcano crater down below known as Pululahau. The vendors from the shops at this stop were the best place to buy inexpensive and quality souvenirs. Believe me, we saw a lot of places to shop while in Ecuador, but none compared to the quality and the prices we found here. And the people were super friendly. It is completely worth a quick stop to see the view and to shop for souvenirs. 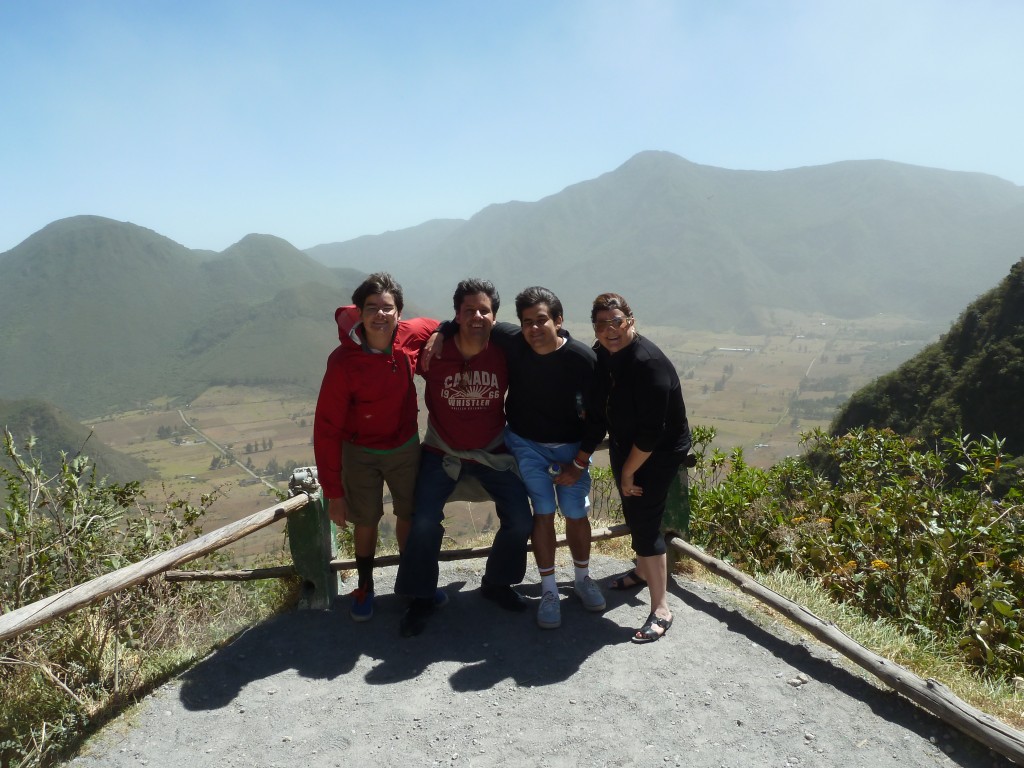 Have you thought about going to the Galapagos when you are in Ecuador?

Then read my Complete Guide to the Best Galapagos Cruise

Galapagos Scuba Diving at Its Finest

Are there two equators in Ecuador! No, well, sort of as there was a huge monument built on what was thought to be the equator line and called the Ecuador Mitad del Mundo. The grounds of Mitad del Mundo in Ecuador contain the Monument to the Equator and the Museo Etnográfico Mitad del Mundo. The only problem is that this monument was built in the wrong place! Today, it is indisputable that the Intiñan Solar Museum is the true middle of the world, which has been proven with modern GPS instruments. But read on for the story behind this.

The Equator Monument was constructed between 1979 and 1982 by Pichincha’s Province Council. It was to replace an older monument that was built by the Government of Ecuador, based on the geographer Luis Tufiño in 1936. Back in 1936, they did not have the benefit of GPS, so they missed the center of the earth (0 latitudes and 0 longitudes) by less than 100 meters. Which I think is pretty good considering what they had to do to figure this out! They were only off by a little less than the length of 2 football fields!

Here in Ecuador Mitad del Mundo, you will find the Monument to the Equator, which was built to highlight the approximate location of the equator. There is also the Museo Etnográfico Mitad del Mundo. It is a museum about the indigenous people of Ecuador. It was here that for many years, tourists would come to stand on the yellow line that they thought was the exact location of latitude 0 degrees. Except later with GPS, it was found out that this is not the spot!

Oops! Can you imagine how they felt when they found out?  As it turns out, the equator line is less than 330 feet to the north of here. Of course, we had to visit here, too! 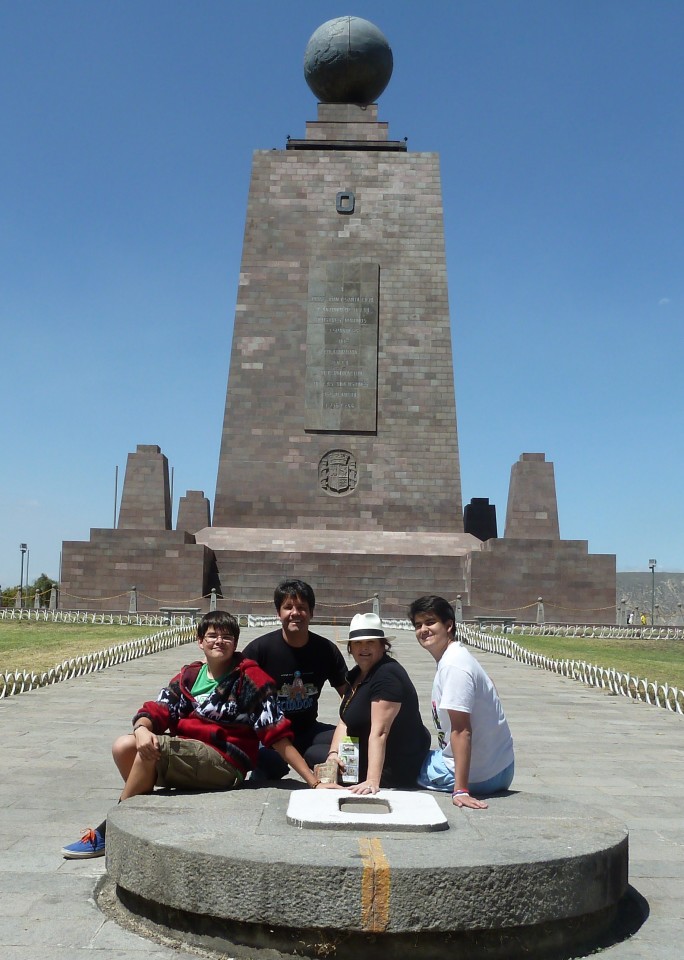 The Monument in the middle of the world.

While visiting the Museo Etnográfico Mitad del Mundo, our son Diego got the opportunity to have bugs crawling on him.  They have live demonstrations here about the local culture, agriculture, and religious significance of the Ecuadorian people. 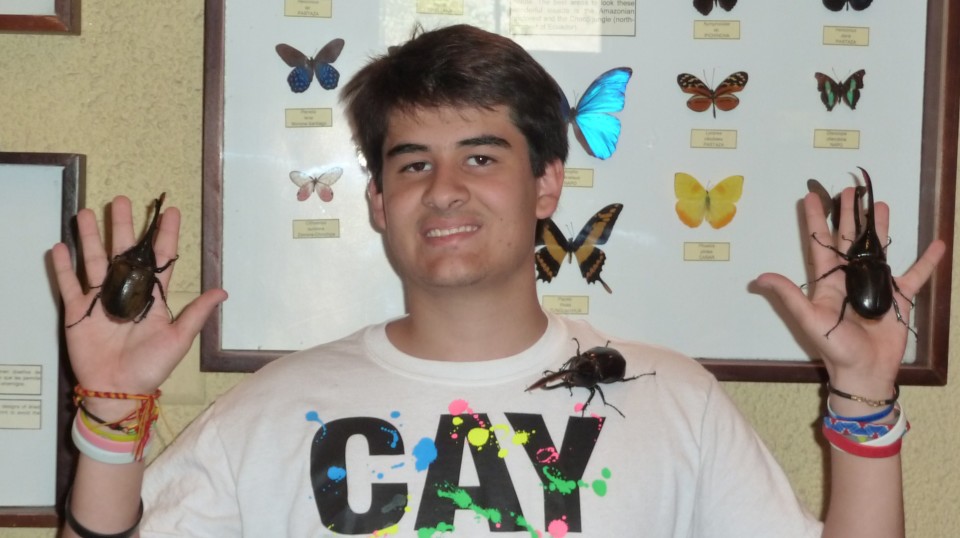 (That is a CAYman Island t-shirt my son has on!)

I also wanted to mention that the people that work here readily admit that a mistake has been made. They tell tourists who ask about it where to find the actual equator:

Our guide drove us down this dirt road, past a small bridge to this next spot that has a sign mentioning the location. This is easily walkable if you are on foot. There is a small admission fee to get in ($4). This location is called the Intiñan Solar Museum, the true Ecuador “mitad del mundo” pr “middle of the world”! 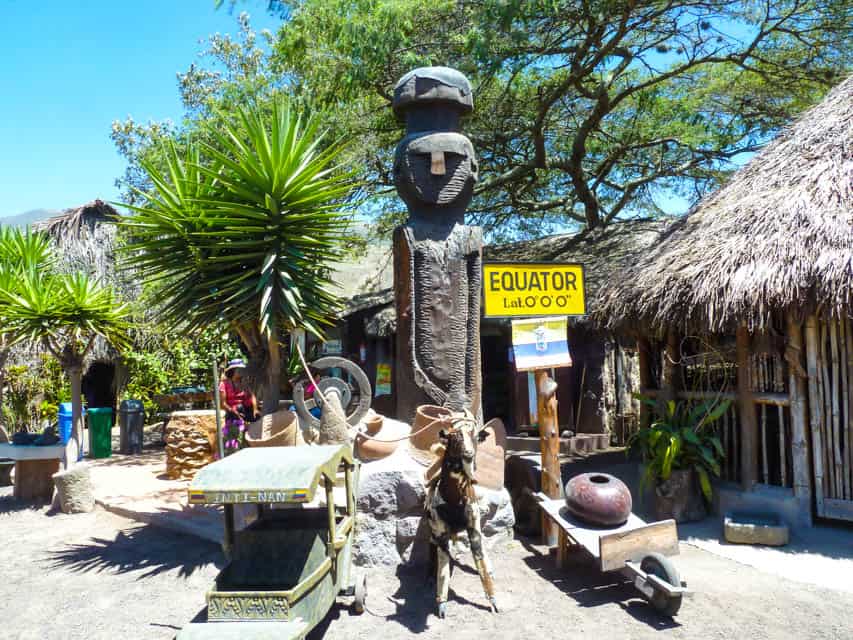 There is a free English speaking guide here who showed us around. We learned a little about the history of the people of Ecuador. He also told us how the equator has a huge impact on the people who live here. We also learned about how the equator affects gravity in Ecuador. The cool thing about this stop to “Mitad del Mundo” is that it is an interactive site with several activities and tests that you and the kids can participate in. This stop overall was much better than the monument stop.

Some of these activities were the water twirling test and the egg balancing test. Our guide told us about the world’s centrifugal forces and how these tests work.

1. Trying with all your might to balance the egg on a nail head on the equator line. 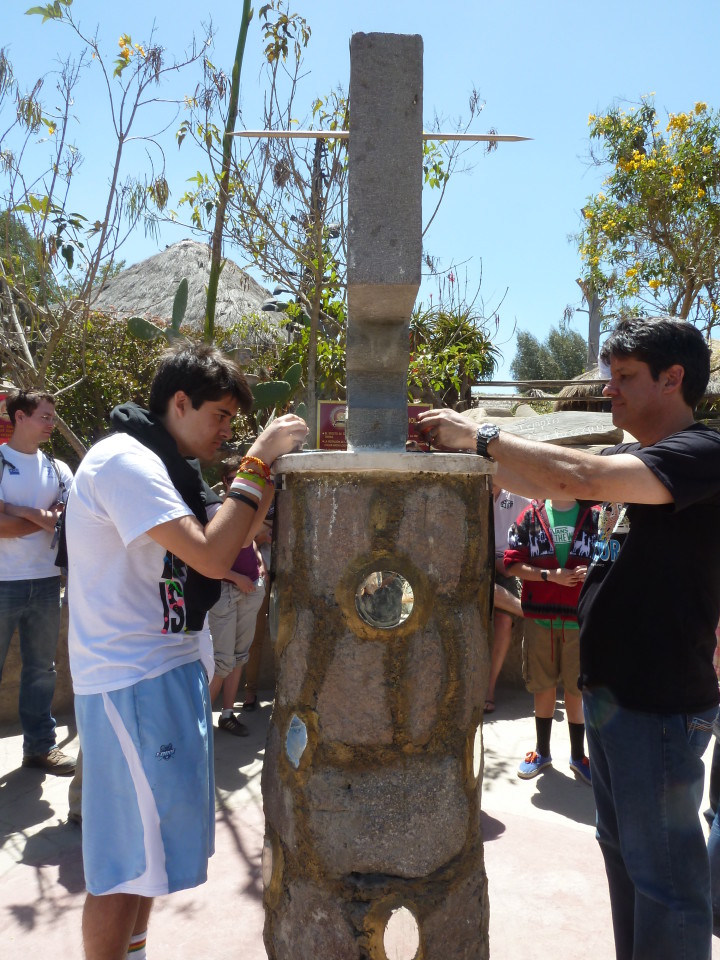 Can you balance an egg on a nailhead?

2. Witnessing of the Coriolis Effect:

Is this a trick? or real science? 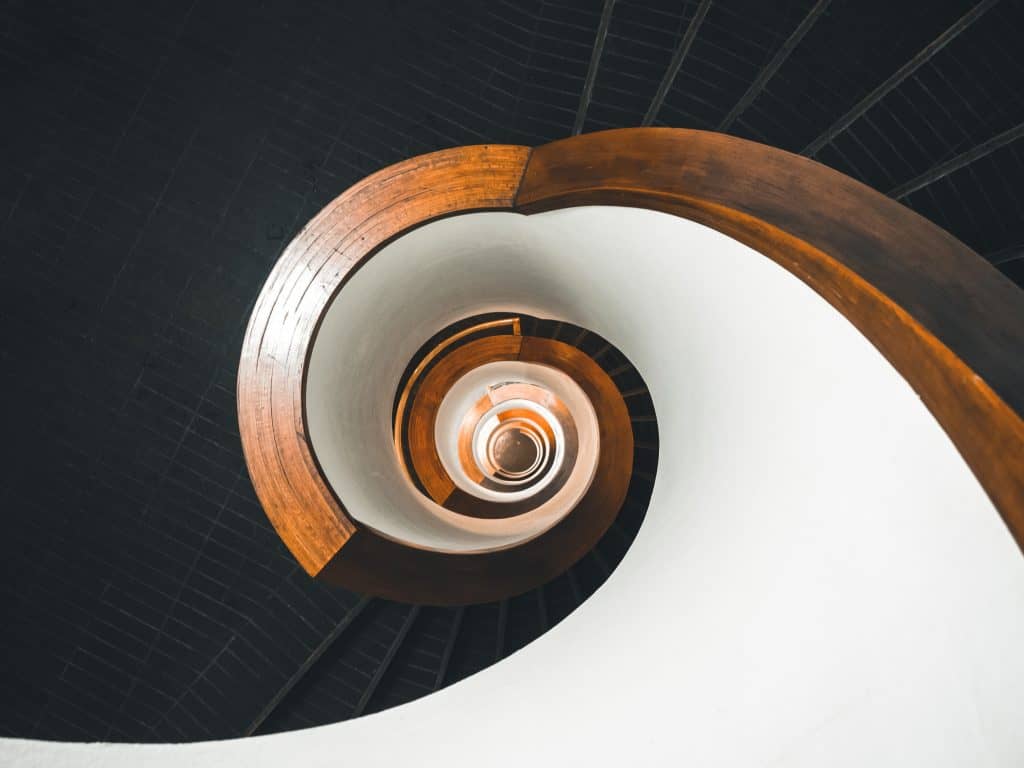 3. Walking the equatorial line with your eyes closed. 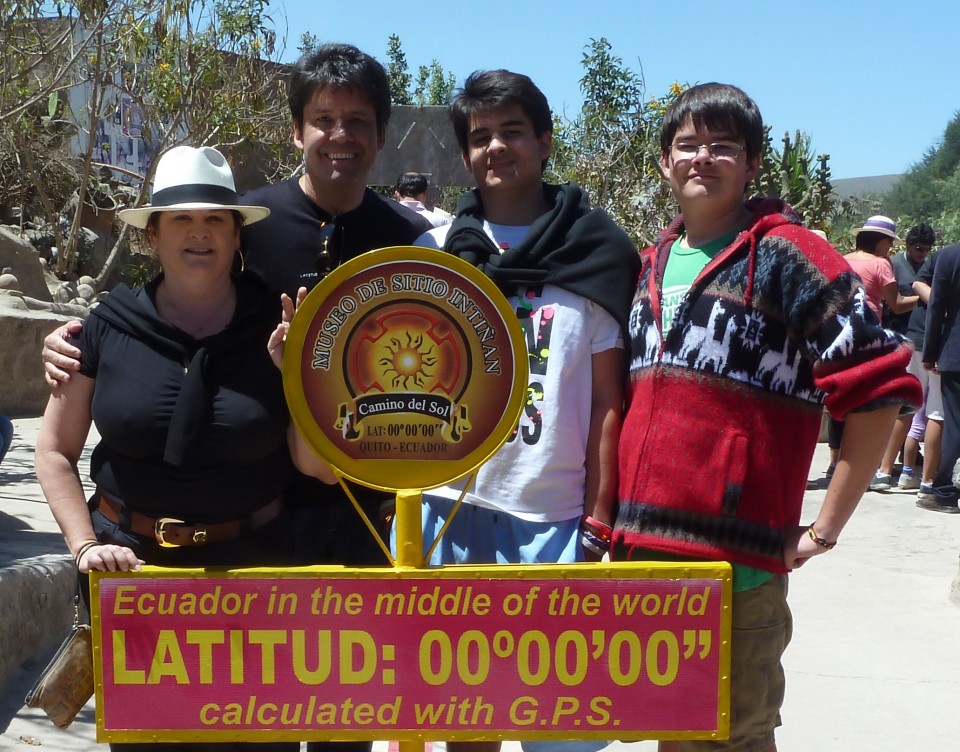 Both places had fascinating displays making a trip here interesting and worthwhile. 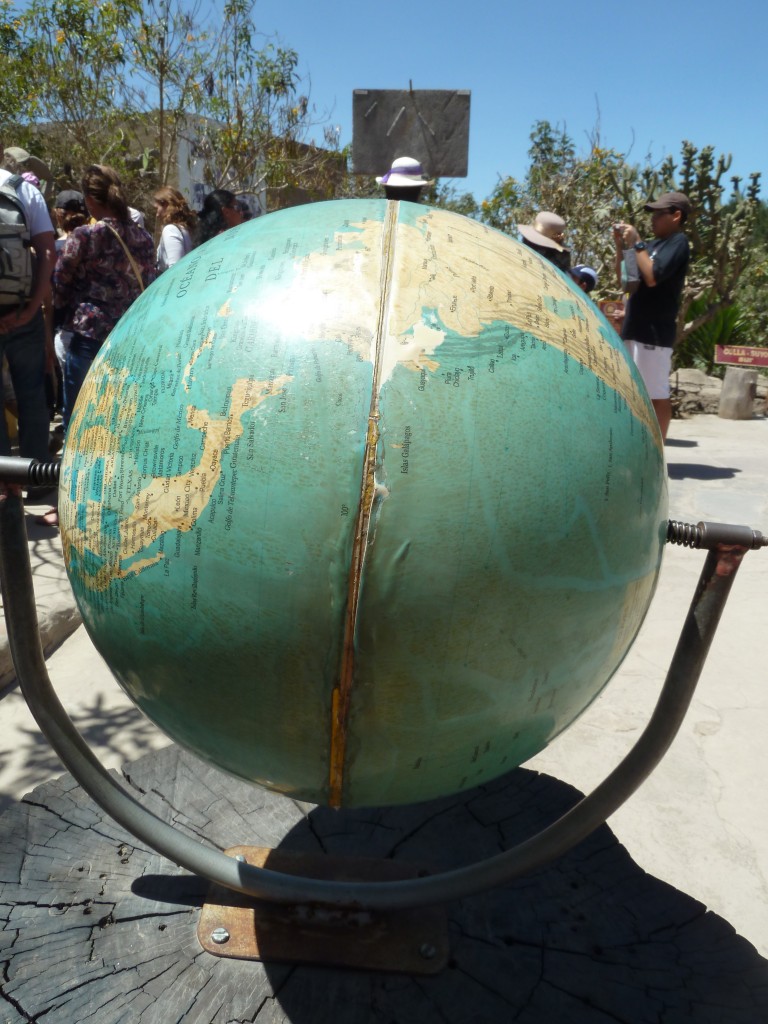 Globe notating the equator line in the middle of the world.

I have written this post in a series of posts about our family trip to Ecuador:

Cuenca, Ecuador:  Stepping Back in Time

The Markets in Cuenca, Ecuador

Quito: A Visit to the Middle of the World  (this post)

A City Upon a Hill:  Quito, Ecuador

Montanita, Ecuador: Out of my Comfort Zone

Want to read about going to Galapagos?

What is it really like to be on an Ecoventura yacht in the Galapagos?

Please let me know how to contact th driver. We would be interested in hiring him.. Did he conduct the tour in English?

We got him through the hotel, and no, no English!