South American food was one of my favorite types of food, especially Chilean food until I had a chance to try some delicious Ecuadorian food! Having a husband from Chile, I loved those handmade meat and cheese empanadas that are so easy to pack in a lunch or to eat by hand. Pastel de chocolo, a beef/meat corn pie is also one of my favorite meals. So when I visited Ecuador for the first time, I was quite surprised at the diversity of the ingredients they have in their foods, especially since they were quite different from other South American countries I had visited.

I soon realized that Ecuadorian food diversity (as well as regional differences) was primarily thanks to Ecuador’s geography. Because of its large coastal regions, there is an abundance of seafood in that region versus the inland areas. Here they are more likely to have this seafood with coconut milk and rice or ceviche. Whereas up in the mountains, with this soil, they have a more diverse growing area for plants such as potatoes and yucca.

I have also had a chance to try Guyanese food, and they couldn’t be more different from each of these, although these three countries are all in South America. Food varieties and differences are an interesting thing in South America. 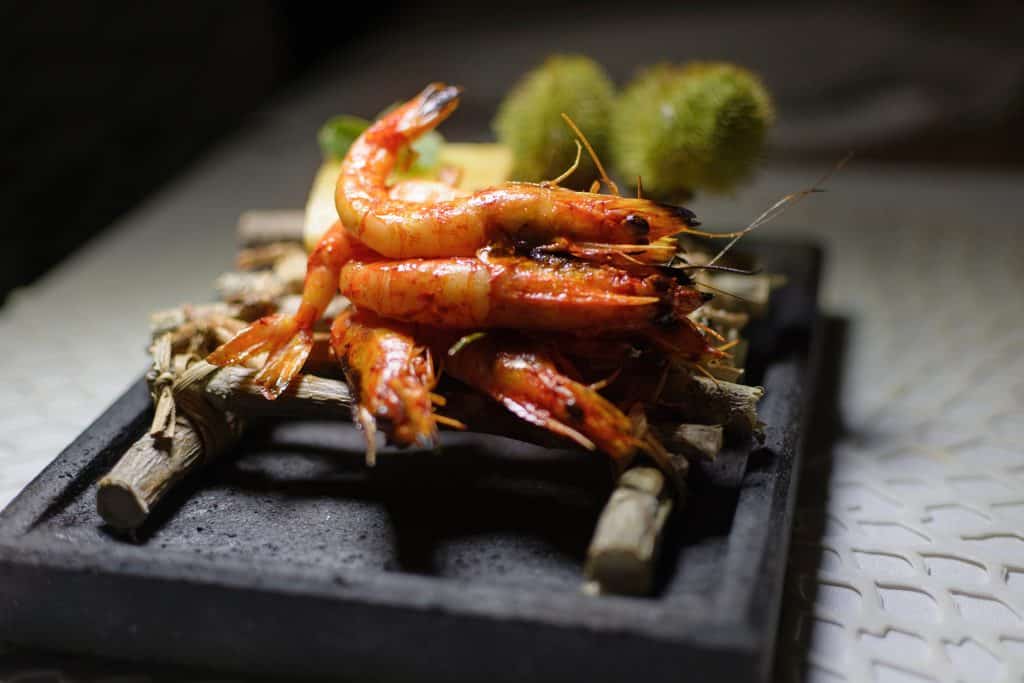 ✦ Ecuadorian Food – In the Andes

As mentioned before, the geography of Ecuador determines what people eat in different parts of the country. With the large, mountainous region in the middle of the country of Ecuador, they have the ability to grow many crops in the Andes, in particular potatoes, corn, and a root type vegetable like yucca.

Ecuador has a huge amount of variety of potatoes that I had never seen before. (similar to Peru.) But it seems that Ecuador puts its own twist on some of my South American favorite food dishes, as well as makes and grows quite a few unique foods. They also grow exotic fruits in tropical regions. Therefore, as you can see, depending on where you are in Ecuador, this determines what type of Ecuadorian food products that will be readily available to you. 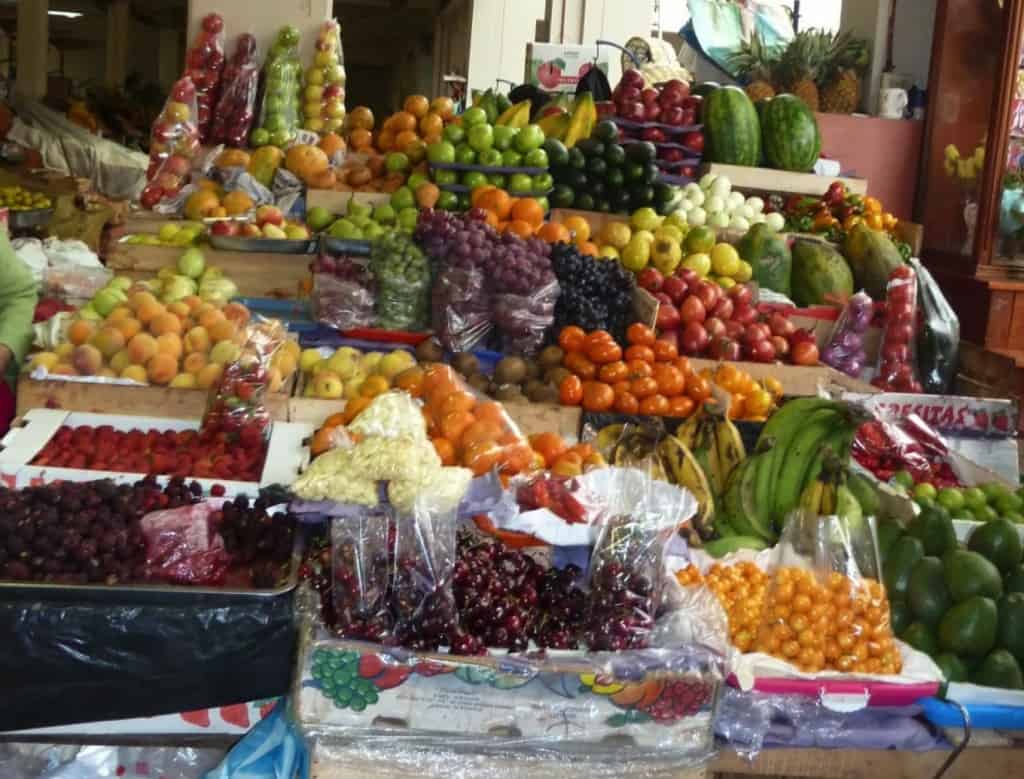 ✦ Foods of Ecuador: A Great Variety

Ecuadorian foods can consist of potatoes, rice, beans, plantains, yucca, seafood, chicken, beef, cuy (guinea pig), and pork. Most of these seem to be staples of the Ecuadorian diet. They also enjoy things like aji (a spicy chile pepper hot sauce), stews, soups and I even saw a lot of ceviche in certain regions of the country that were closer to the ocean. Again, it does depend on what geographical area you are at in the country.

Have you thought about going to the Galapagos when you are in Ecuador?

Then read my Complete Guide to the Best Galapagos Cruise

Here is a list of interesting Ecuadorian foods to try: 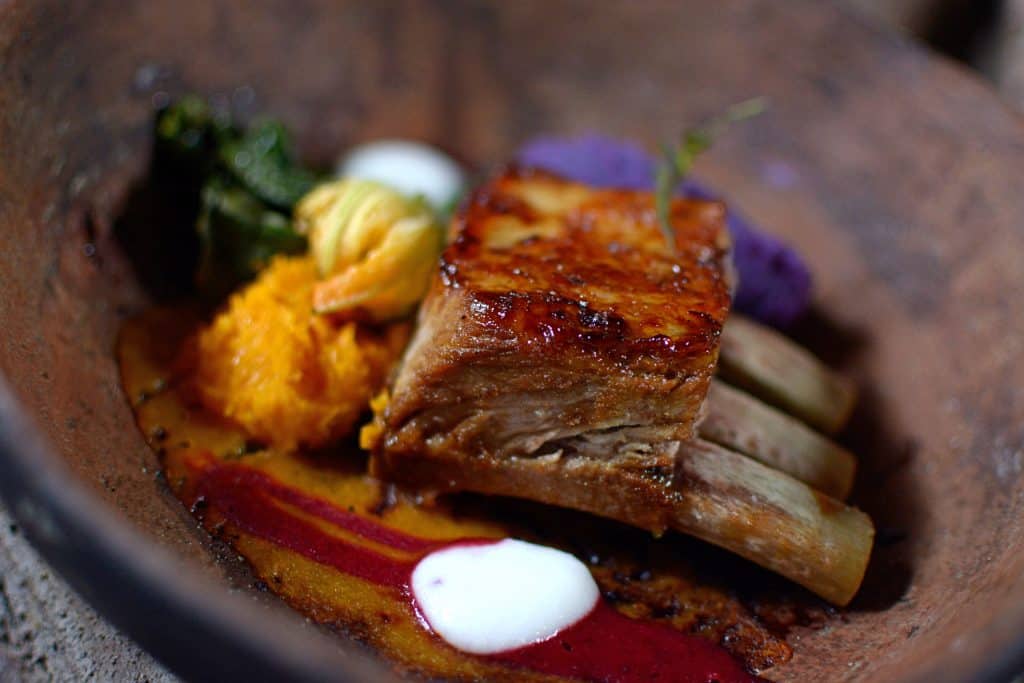 These are cubes of pork that are fried in their own drippings until crisp on the outside and tender in the center.

Seco de Cordero is a stewed meat, typically from a goat or a lamb.

These are the breakfast choice of most Cuencanos. It is a muffin made with ground corn and can be sweet (dulce) or salty (salado). They are wrapped in a corn husk or a banana leaf and steamed.

A fish stew found in the coastal regions, Encebollado is usually made with albacore tuna and is cooked with cassava and red onion. Often eaten for breakfast!

Mote is corn/hominy that has been dried and then rehydrated, typically cooked with and seasoned with eggs, onions, salt, and parsley.

Mote is similar to corn or hominy. This one is peeled, boiled and served with pork.

A pancake-like cheesy nugget of goodness cooked on a ceramic skillet and made with ground dried or fresh corn and wheat flour.

Potato soup made with milk, cheese, avocados and primarily with the potato known as papa chola, a large yellow potato with red skin.

A fried potato cake served with peanut sauce. Generally used as a side dish at lunch or dinner or served as a snack. Llapingachos are grated potato, cheese, and seasoning that are smashed together and fried into patties. They are more common in the Andean region of Ecuador

Ground corn, water, and lard that is spread on a banana leaf. Seasoned with either chicken, pork, or beef that is wrapped inside.

Uchumanga is a stew where they don’t waste anything and so the fish is cooked with animal intestines and stewed.

✦ Ecuadorian Cuisine: What to Drink?

✦ Ecuadorian Cuisine: What to Drink?

Rosero is a drink that includes ground white corn, orange juice, pineapple, and strawberries. They may include other exotic fruit from the region. They then add clove and cinnamon. It is sweetened with sugar and served cold.

Colada Morada is a traditional Ecuadorian beverage prepared with black corn flour and fruits. It is also sweetened with sugar and spices are then added.

These are figs that are prepared in a particular way, picked green, they are soaked in water for 24 hours and then steeped in a syrup made from brown sugar and spices. Typically they are served with cheese and are an Ecuadorian dessert. They can also be stuffed into a sandwich and sold by street vendors.

We had made our way from Guayaquil (close to the ocean) to Cuenca by private bus. We wanted to see what type of food this city had to offer. Cuenca is nine hours south of Quito and four hours east of Guayaquil. 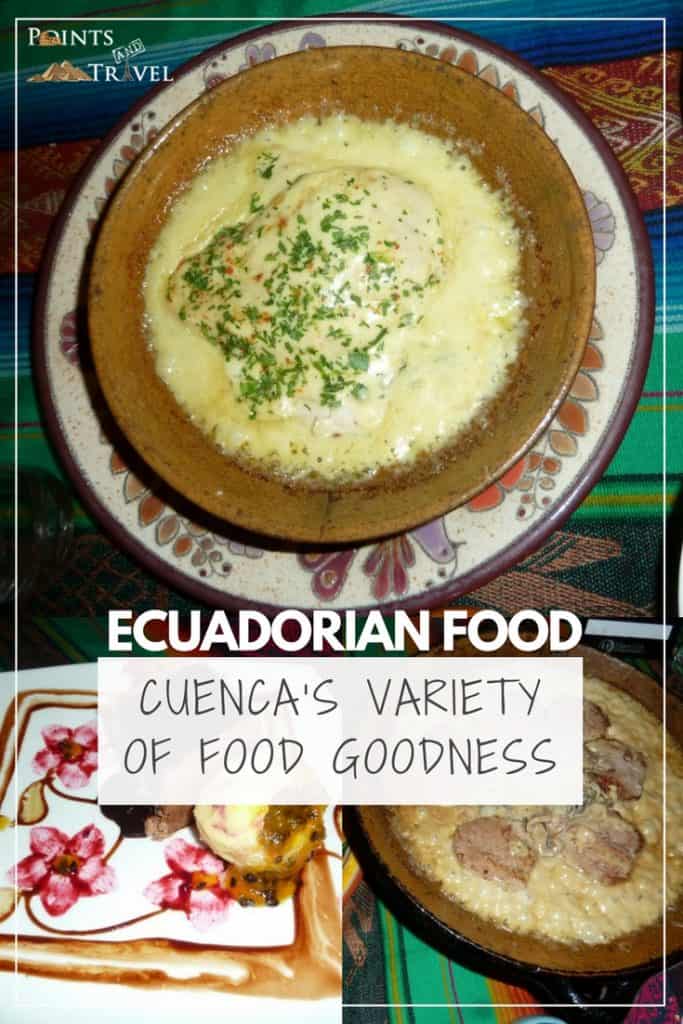 On our first night of arrival, it was getting late, so we decided to head out to Cafe Eucalyptus. We could not have made a better choice. The ambiance was “Old World meets Colonial Tommy Bahama”.  I really enjoyed the atmosphere, as well as the foods that we tried. Typically they have a band playing, but not the night we were there, probably because it was on a Wednesday night and the band plays on the weekends. 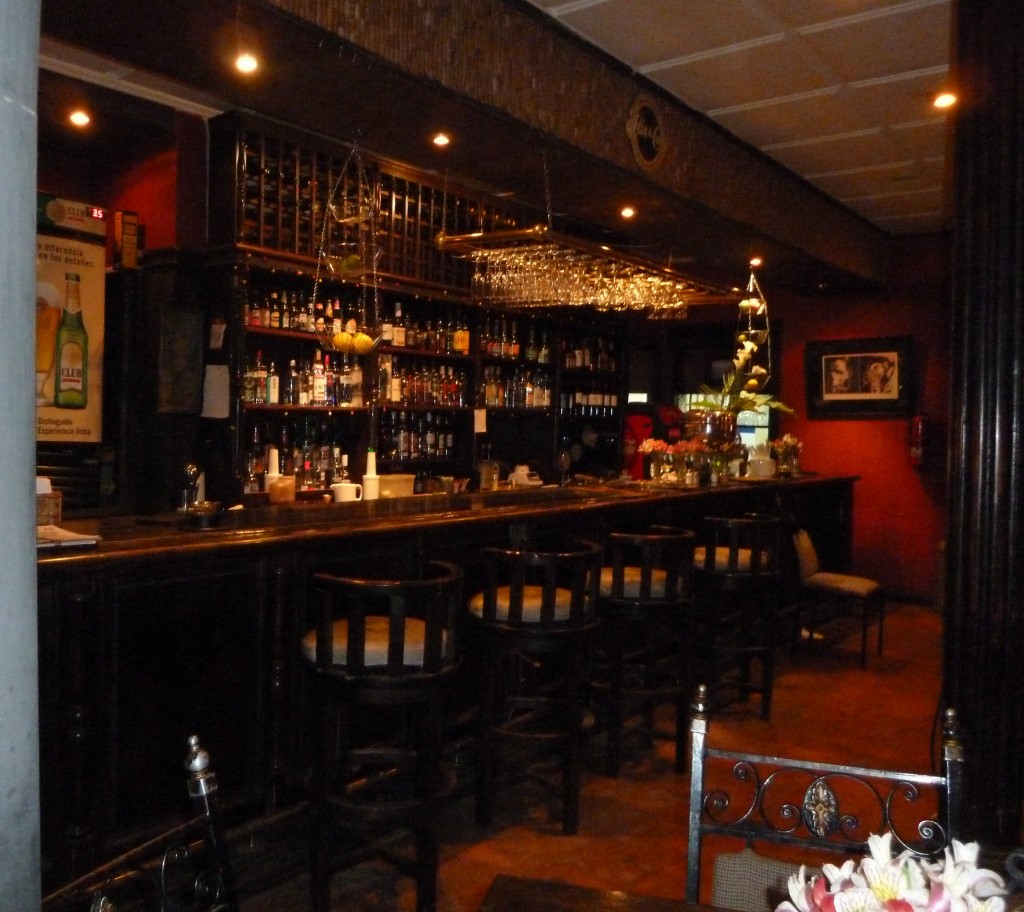 Cuenca blends two different food cultures: the Spanish and the native Ecuadorians. Some dishes rely on local ingredients yet are prepared with European cooking techniques. While others are cooked in spiced sugar syrups, which has been a type of cooking in the region prior to the Spanish arrival.

✦ We Saved the Best for Last, Tiesto’s

Our final night, we saved the best-recommended restaurant for last! Ranked #1 as the best thing to do in Cuenca by Lonely Planet, we designed our day around the meal that would please our palates. As we heard Tiesto’s would do. It is a very cozy Ecuadorian restaurant, with an open kitchen and friendly staff that wear the traditional Panamanian hats made here in Cuenca (made in Ecuador and imported to Panama, thus the famous name). The staff was perfectly trained to take great care of us. 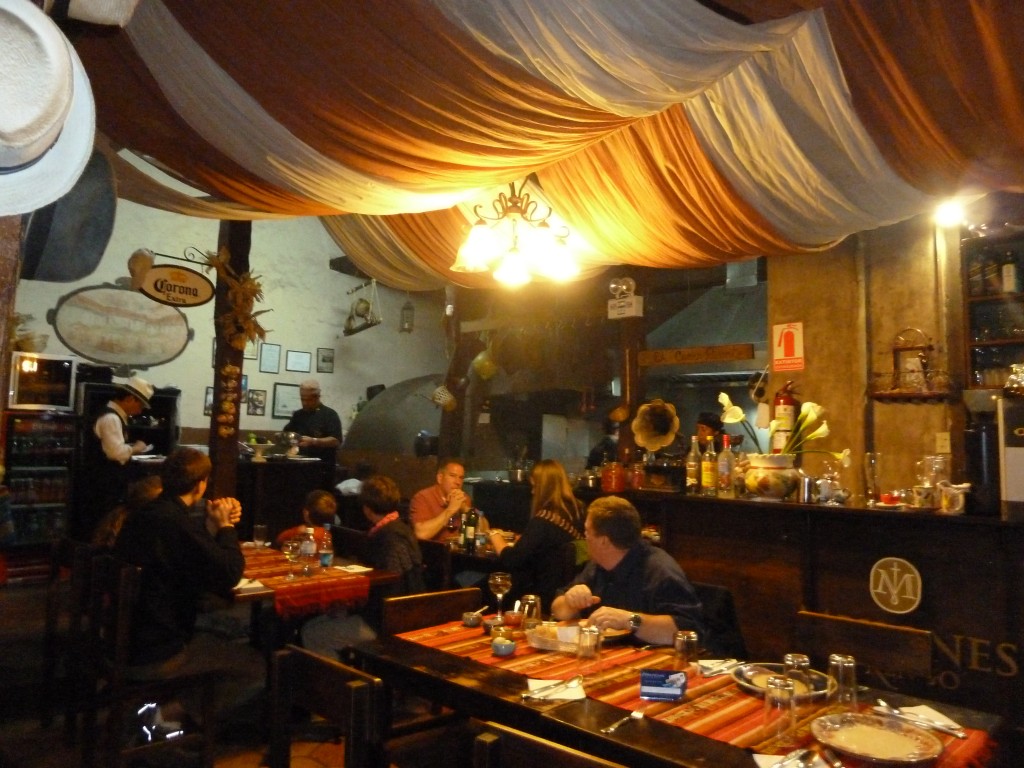 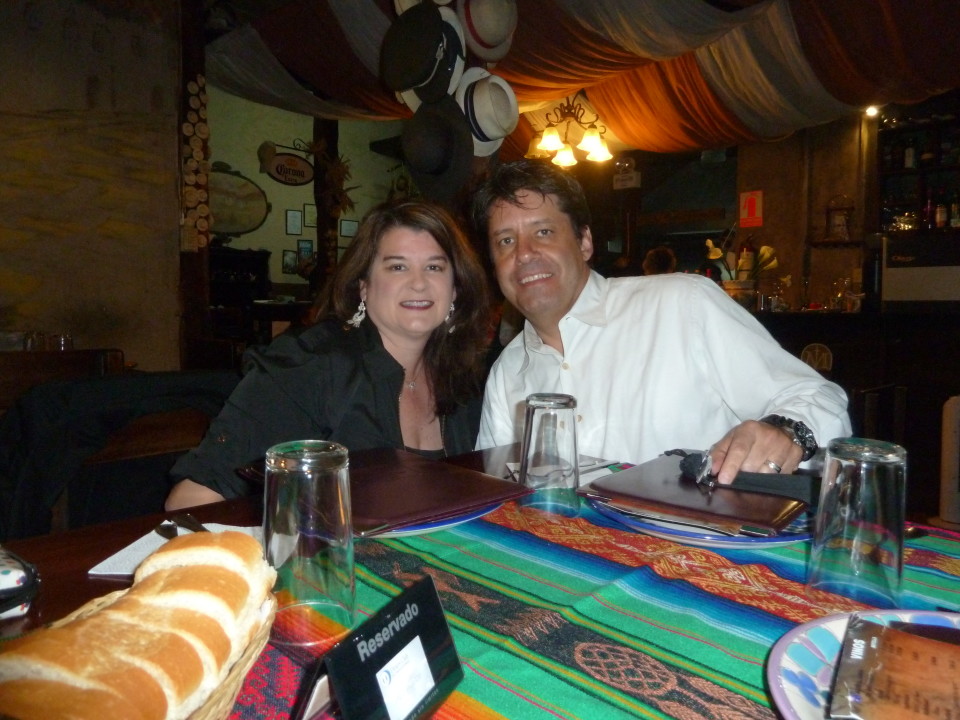 My husband and I enjoying Ecuadorian Food.

This Ecuadorian food was absolutely amazing. How could we resist the chef/owner Juan Carlo’s offer of his recommendation as to what to choose from the menu of traditional Ecuadorian food? He ordered us langoustines served in a tomato cream sauce that was to die for! Just so you know, the chef typically visits all the tables every night! 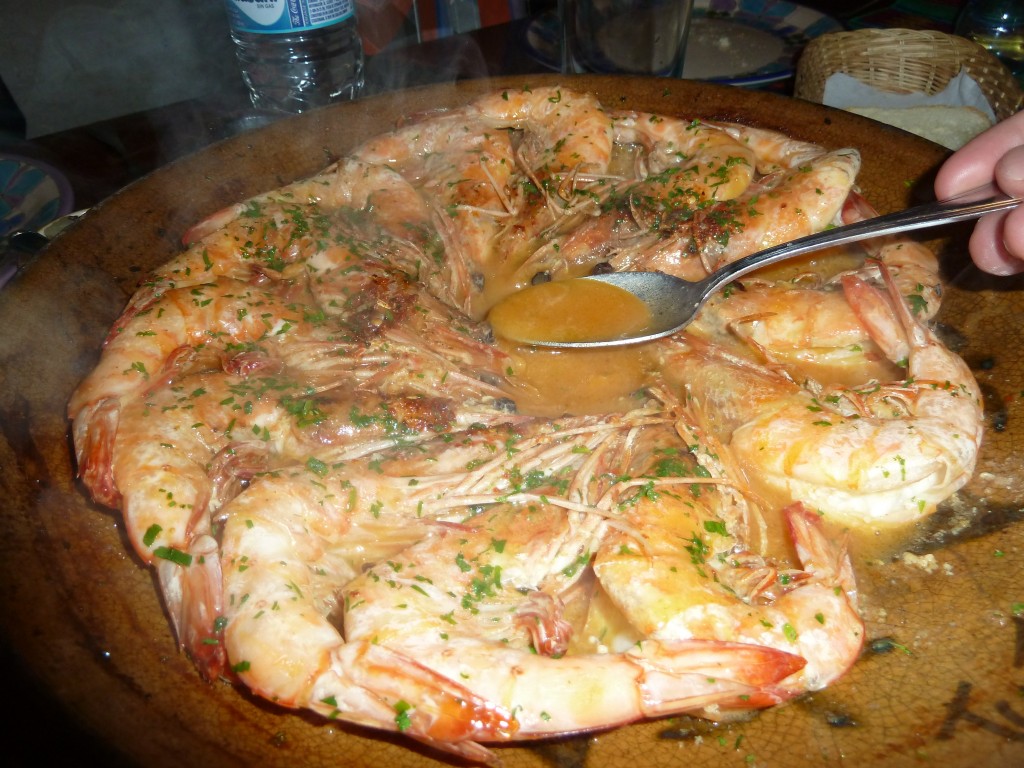 Then the lomos (pork) medallions topped with a creamy cheese sauce, which were also fantastic, served sizzling in a ceramic platter. The meat was tender and melted in our mouths. 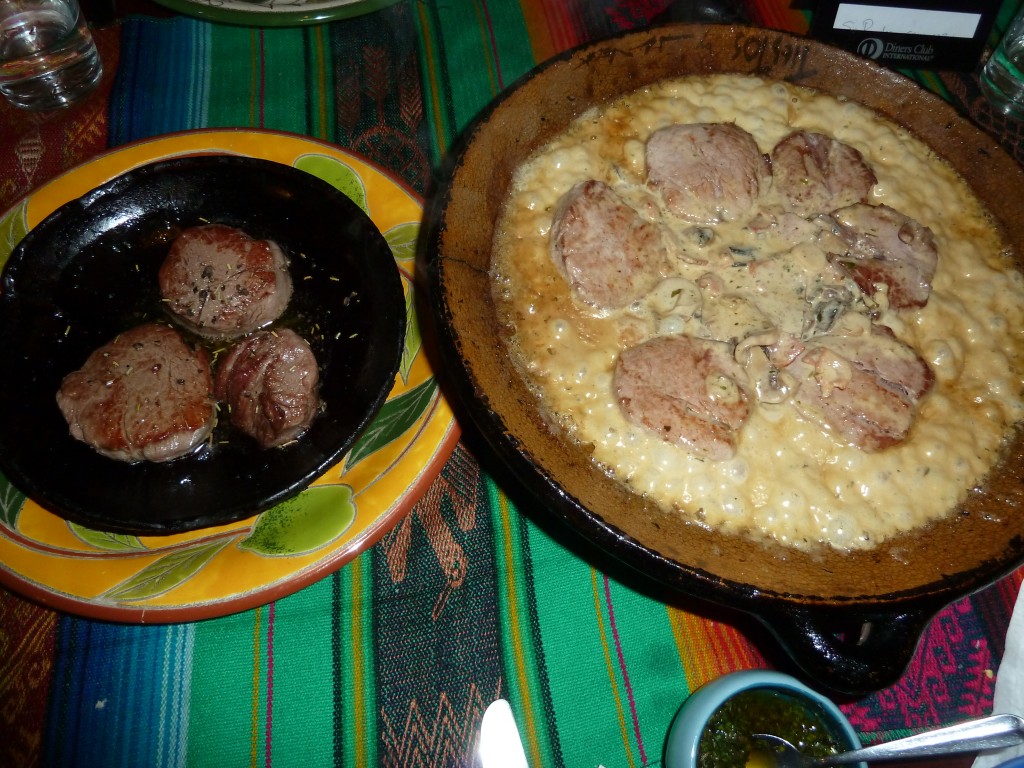 The accompaniments of our Ecuadorian food were excellent also. 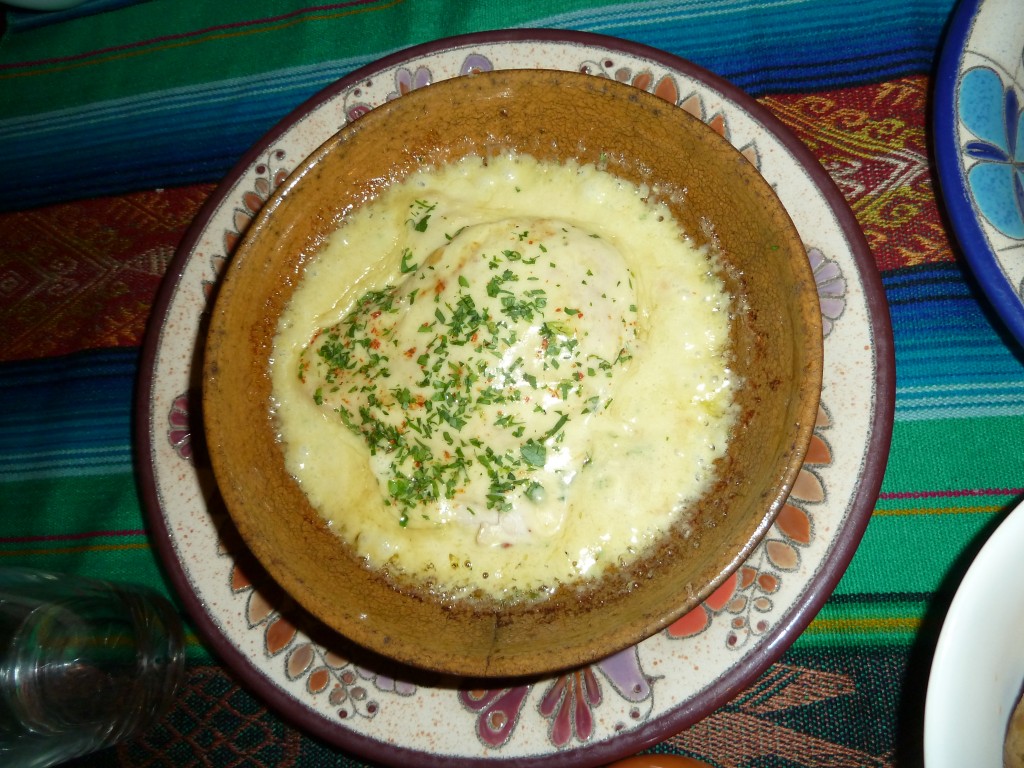 The finale was the dessert: 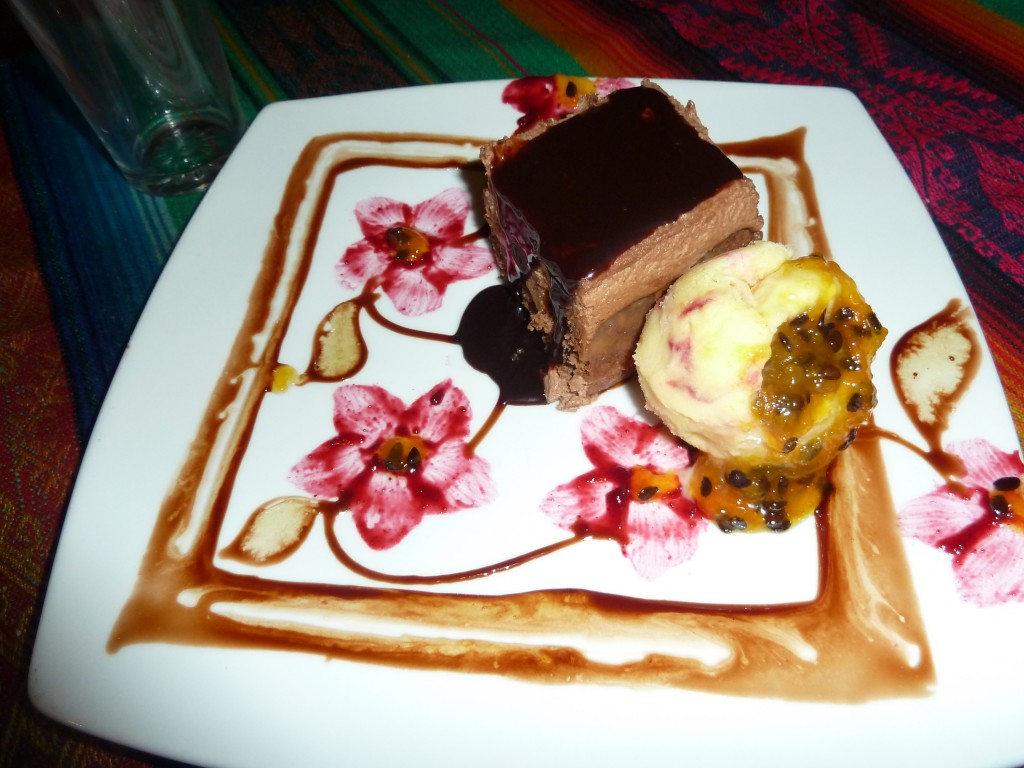 On our walk home (good thing we had to walk!), we passed the Cathedral, where the ice cream vendors were busy at work. 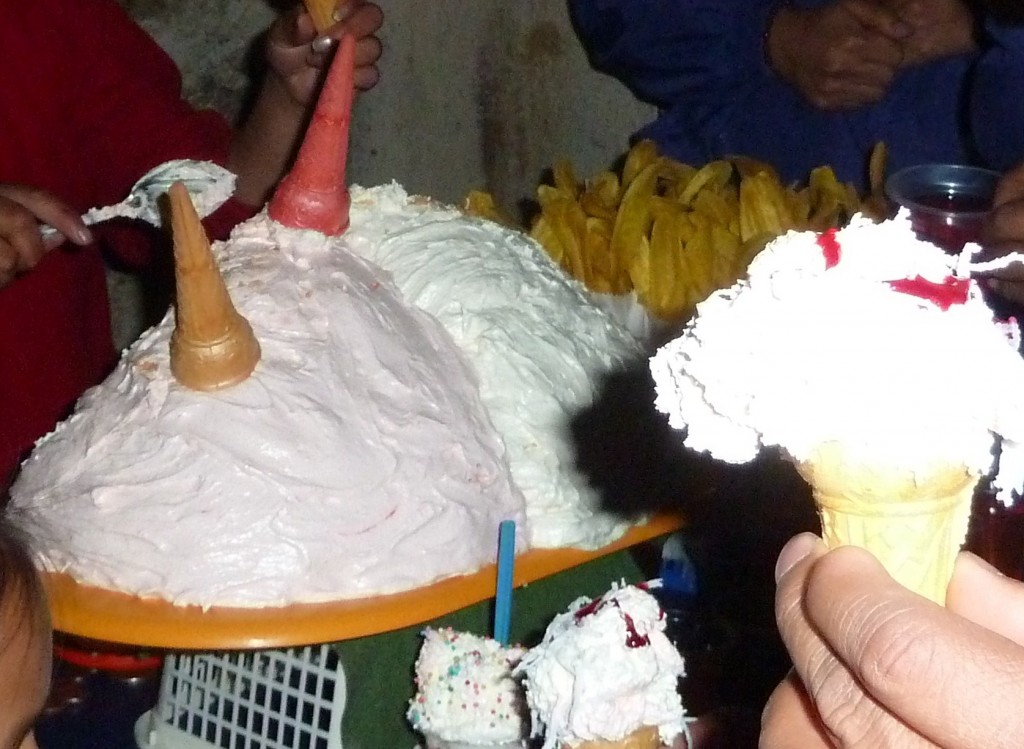 That meringue concoction that was piled high into ice cream cones sure looked good.  I didn’t try it since we already had dessert, but later I heard that the fluffy meringue is made with raw egg whites and that maybe it is not a good idea to indulge in the concoction.  A lot of the locals eat it, but I think their tummies are used to it.  I probably would have tried it anyway, but our bellies were full from Tiesto’s. Look closely in the background, those long yellow crispy looking things were actually plantains (bananas) that were thinly sliced and then deep-fried, they looked good too, but we were stuffed.

Farewell Tiesto’s:  Until we meet again! 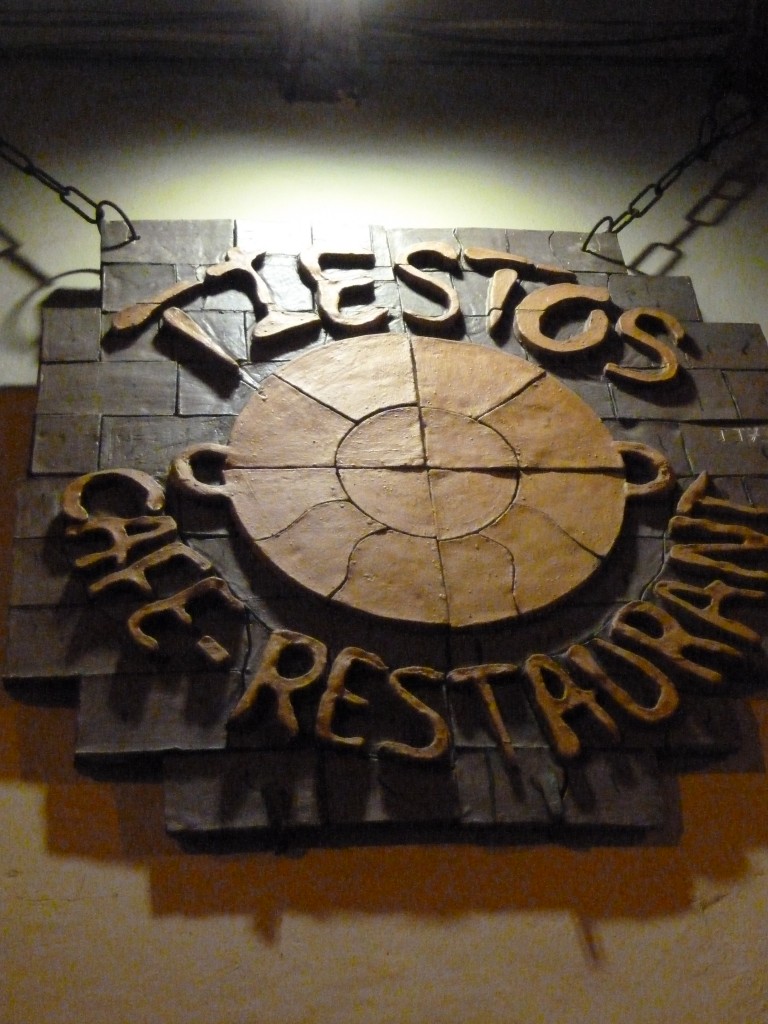 There you have it, great Ecuadorian food was found in Cuenca!

In case you are looking for a place to stay in Cuenca, you can check here for many great options.

Post #5:  Quito: A Visit to the Middle of the World

Post #8 Cultural Tourism in a City Upon a Hill: Quito, Ecuador

Yes! the food was delicious!

Oh man. Now I have to go to Ecuador. Looks delicious!