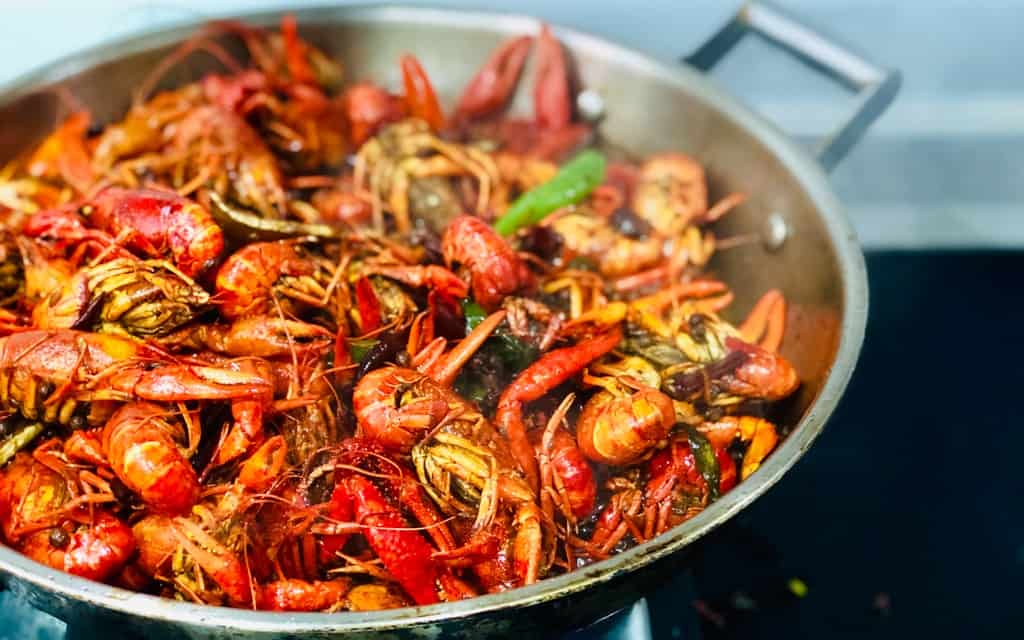 Ecuador is a country with a diversity of climates, regions, and altitudes that makes it an exquisite country with many different types of traditional dishes. Depending on the region where you are, there is a variety of typical doses. And since the islands are owned by Ecuador, the dishes combine the elements of the Ecuadorian highland dishes with meat, potatoes, and grains, along with the coastal ingredients like fruit, yucca, fish, and all types of seafood. The Galapagos Islands definitely take their culinary influences from coastal Ecuador. 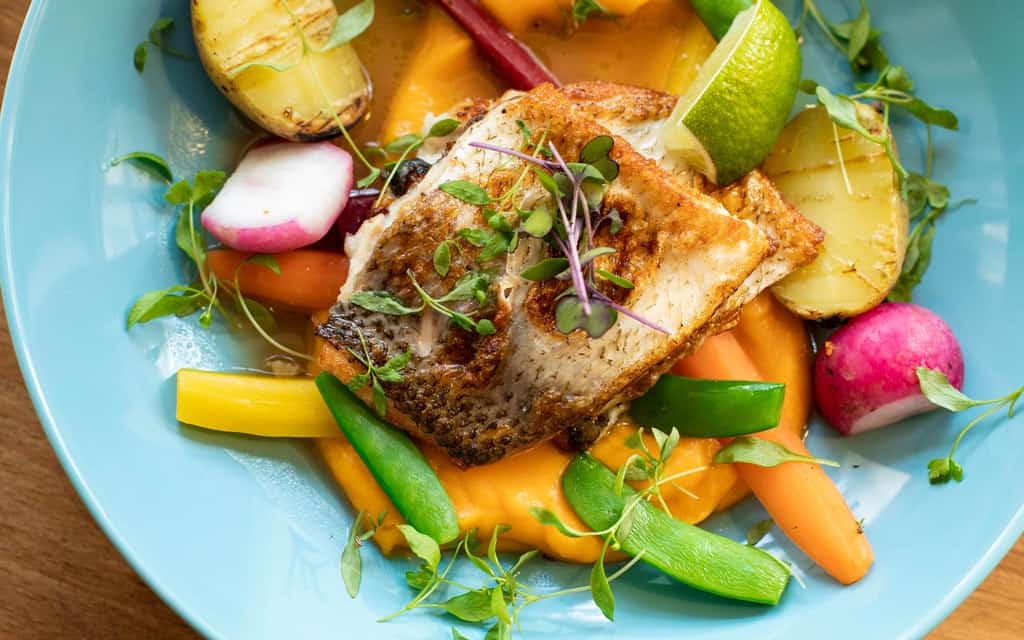 As a UNESCO World Heritage Site with a large number of protected species, you have to be careful in almost everything you do on the Galapagos Islands. It is important to be considerate when choosing where to dine and what to choose from on the menu! Fortunately, there are plenty of local delicacies on this archipelago that are served without endangering any species. As Ecuadorian gastronomy is a little recognized, but very distinct cuisine. Like many island groups, the seafood is plentiful, fresh, and delicious. The careful protection of the island has allowed vegetation to grow and be farmed responsibly for the enjoyment of locals and tourists alike. 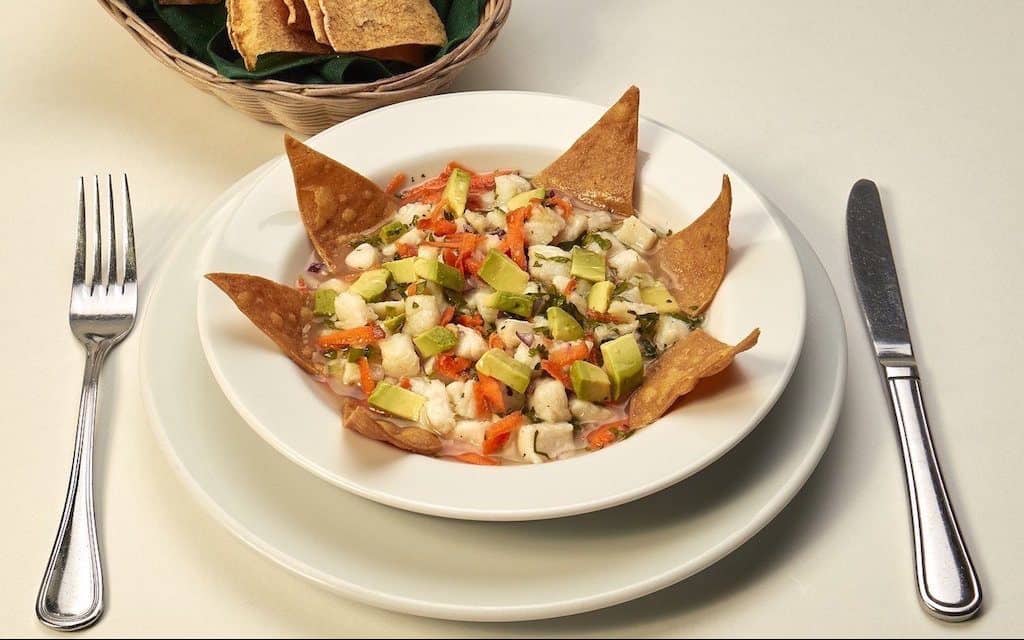 Popular throughout many countries of Central and South America, Ceviche is traditionally built around fresh, raw fish cured in citrus juices and spiced with chili peppers. But it can also be made from shrimp,  octopus, squid, Canchalagua, or churros. There are a variety of ceviche dishes – including ceviche cocktails.

The fish in ceviche can be Corvina, which is sea bass. Fish ceviche can also have a wide range of shellfish as the main protein including black clam, oysters and barnacles – depending upon what is in abundance in the region or during the season. 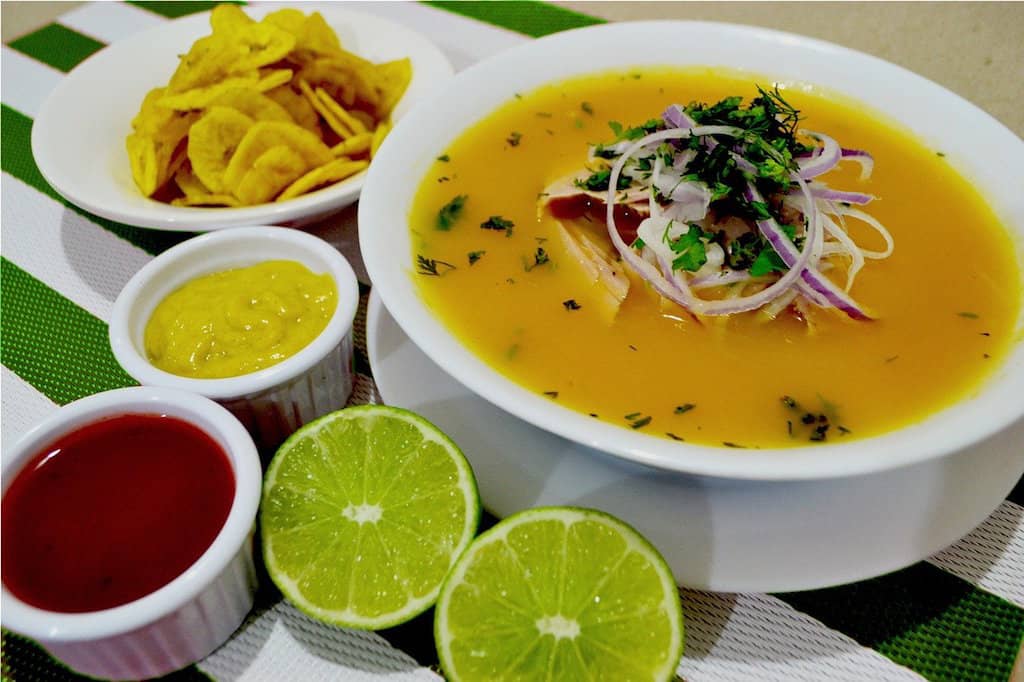 The national dish of the Galapagos Islands, encebollado, is a fish stew, served with boiled cassava and pickled red onion rings. It is often sold by vendors for breakfast, mid-morning snack. or lunch using albacore, tuna, billfish or bonito. Thick fish-based soups like encebollado are a common element in most Galapagos Islands restaurants and many times include yucca, chilies, and onion. For eating on the move, vendors will typically serve the stew with banana chips, popcorn, plantains or even bread (perfect for dipping). 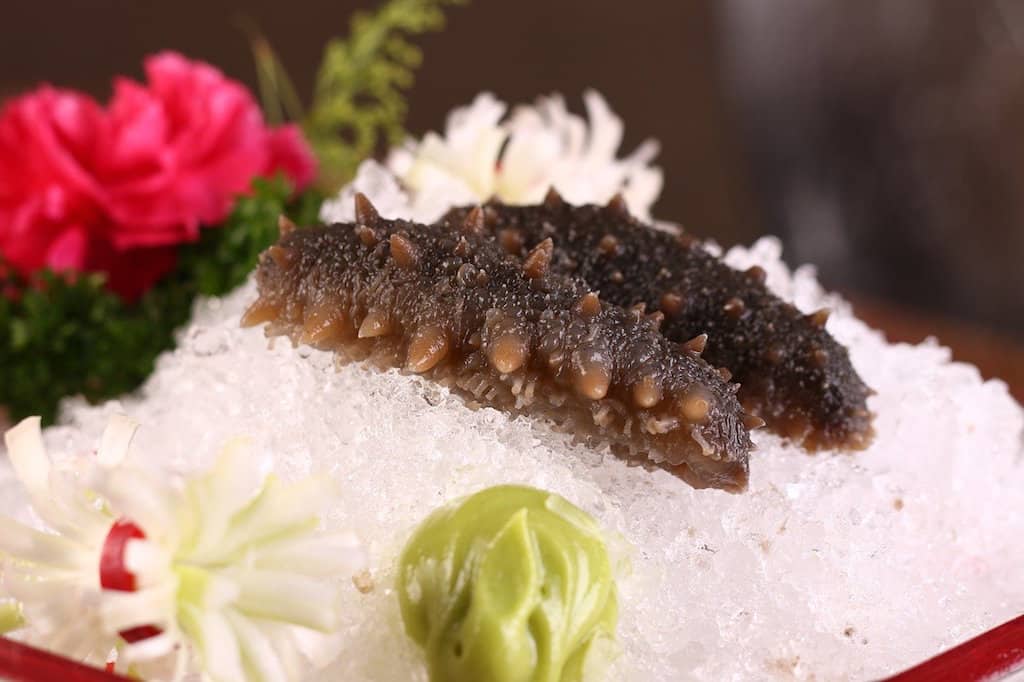 A traditional treat on the Galapagos Islands, sea cucumbers are thought to be an aphrodisiac (and potentially why so many indigenous species thrive and re-populate.) Sea cucumbers are served in a range of different dishes, due to the versatility of the taste. Braising and frying are two of the most common forms of preparation, served alongside stews or with fruit.

Hornado or a Whole Roasted Pig 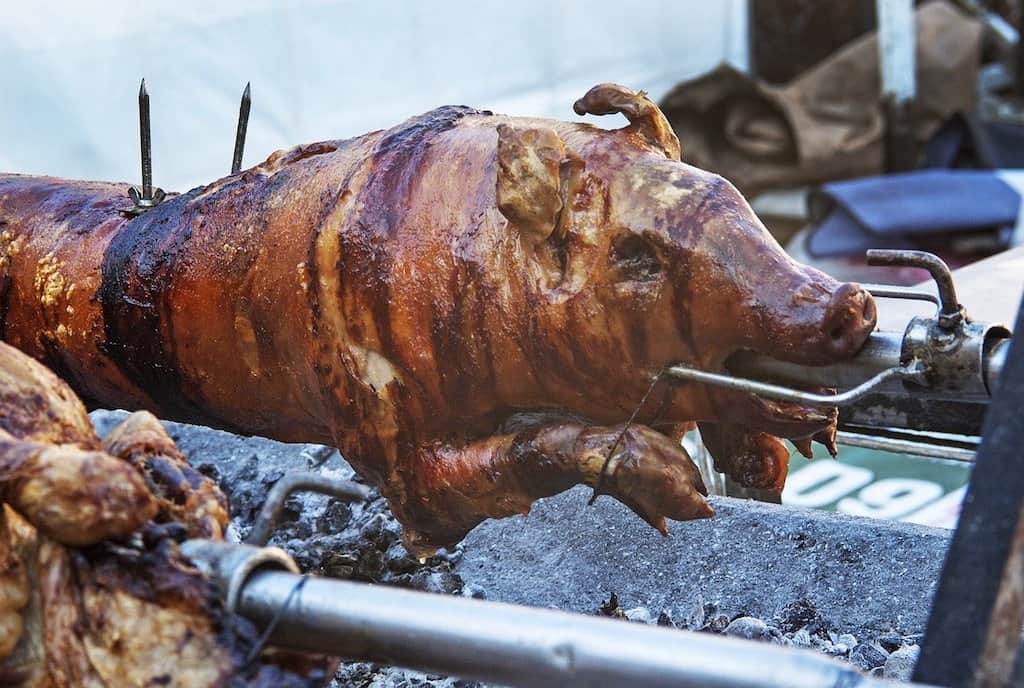 Hornado is one of the most popular foods in the mountainous regions of the Galapagos Islands. It is often served in highland markets. A whole roasted pig, served with vegetables, llapingacho (fried potato cakes) and sometimes grains are cooked in water. Hornado provides the ideal sustenance for visitors hiking through the mountainous regions. 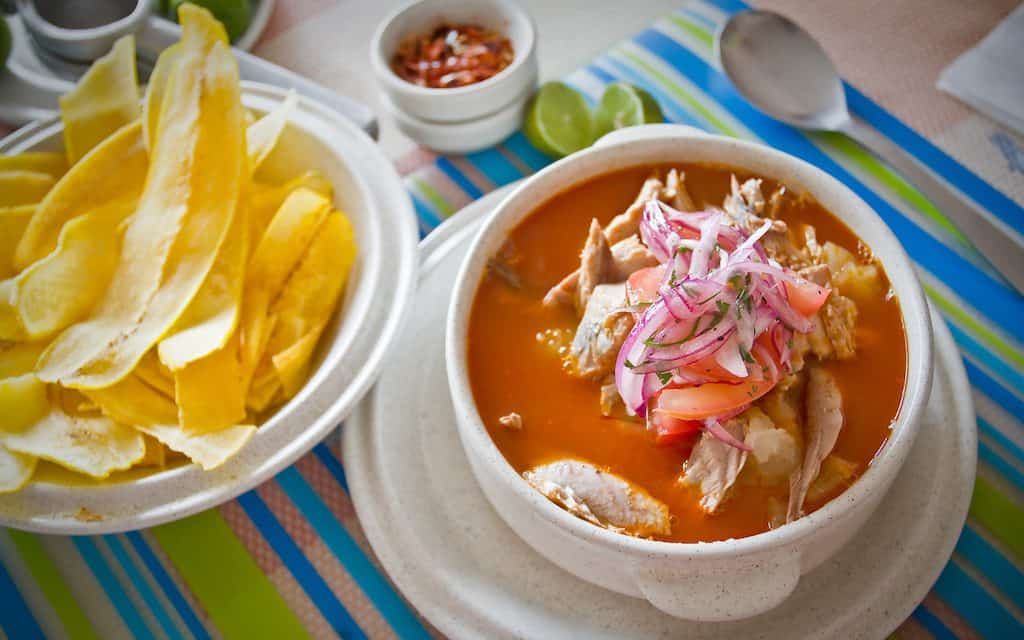 This fish soup is called Viche de Pescado and is a soup with a creamy peanut base and chopped vegetables along with a white fish like Corvina (sea bass), tilapia, or halibut. It is very thick, almost like a stew. It also may contain cassava (yucca), sweet plantains, corn on the cob pieces, peanuts, garlic, spices, onions, and cilantro. Many times the chopped vegetables can be squash, sweet potatoes, or green beans.  Often even beans are added to the fish soup. 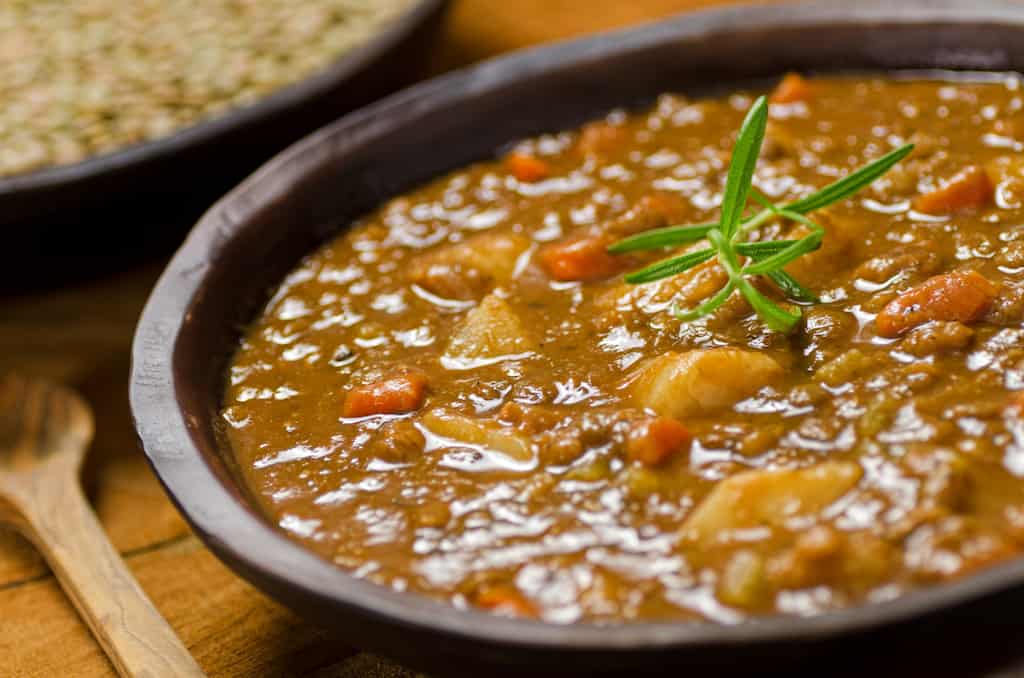 Arroz con Menestra is made of lentils or other varieties of beans and is basically a lentil stew.  It is served with roasted meat, fried meat, pork chops or even roasted chicken. Most of the time it comes with sides of patacones and a sliced avocado. 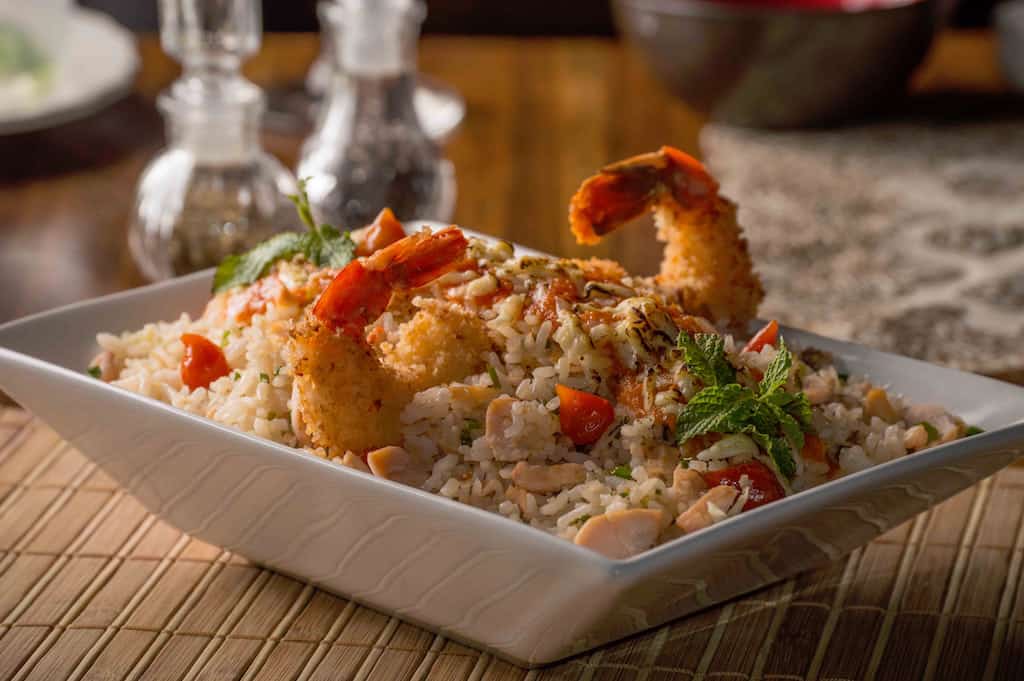 Arroz Marinero is a seafood rice dish that looks similar to the Spanish paella. It is made with cooked long-grain rice in a seafood broth. Added to it, is sautéed shrimp, clams, squid, and bay scallops. Then sauteed onions, green peas, bell pepper, garlic, and cilantro are added. And I do mean a lot of cilantro and garlic are added to give flavor to this dish. Last, but certainly not least, spices are added, specifically achiote or annatto. This gives the seafood rice dish a slightly reddish color and an earthy flavor.

Side Dishes are frequently green plantains

Patacones are thick-fried green plantains and are seen as a side dish in almost every restaurant. They are similar to fried potato chips, yet are thicker and made from plantains, not potatoes. The plantains are sliced to about 1 1/2 inches into long pieces. They are then twice-fried in oil. Then smashed down with the bottom of a bottle (to make perfectly round slices) or a Tostonera. A Tostonera is a wooden press that flattens the plantains. Finally, the pieces are then fried again and then seasoned to taste, most often with salt. Many Ecuadorians like their Patacones dipped in water seasoned with garlic salt!

A bolones is a savory fried plantain that is smashed and formed into a ball that looks like a dumpling. Many times bolones are served with a fried egg on top or with cheese. The local breakfast in the Galapagos Islands might involves some form of bolones along with fresh fruit. Along with this, the locals tend to have juice with breakfast as well. Here in the Galapagos, they have many choices. Juices like tomato juice, guanabana juice, and passion fruit juice, and watermelon juice are few favorites. I saw passion fruit juice in almost every store.

Chifles, as mentioned above are sliced plains and are often served with the breakfast of Ecuadorians. It is also eaten with hot or cold soups, like encebollado or ceviche. In Ecuador, they have both the sweet chifle and the salty one. I found the salty one most common while in the Galapagos, as the brand name comes from Guayaquil and is imported. It is called Tortolines de inalecsa.

Breakfast in the Galapagos

As mentioned above, bolones or dumplings are very often served, especially with an egg or cheese on top. But the locals also love Cassava bread, plantain tortillas, empanadas,  or even a pork crackings. All of these are popular breakfast dishes in the Galapagos.

UNESCO declared the Galapagos Islands a World Heritage site because of its exotic flora and fauna. The Galapagos Islands have many exotic fruits such as bananas, papayas, guanabanas (soursop), guayaba (guava), tropical plums, rose apples. tree tomatoes, onions, and hot peppers. In fact, the Capsicum Galapagoense is a popular pepper and found commonly in the Galapagos Islands. They are considered very delicious. Babaco (sometimes called Mountain Papaya or Champagne Fruit), jocote (small tropical sour fruit), and naranjilla (golden fruit similar to an orange) are just a few of the more exotic fruits found here.

The Most Popular Dishes in the Galapagos Islands

And since you want to try Galapagos foods, you might start reading these articles to start planning your next vacation there: