Home » Culture » A Visit to the Chora Museum is a DO NOT MISS! 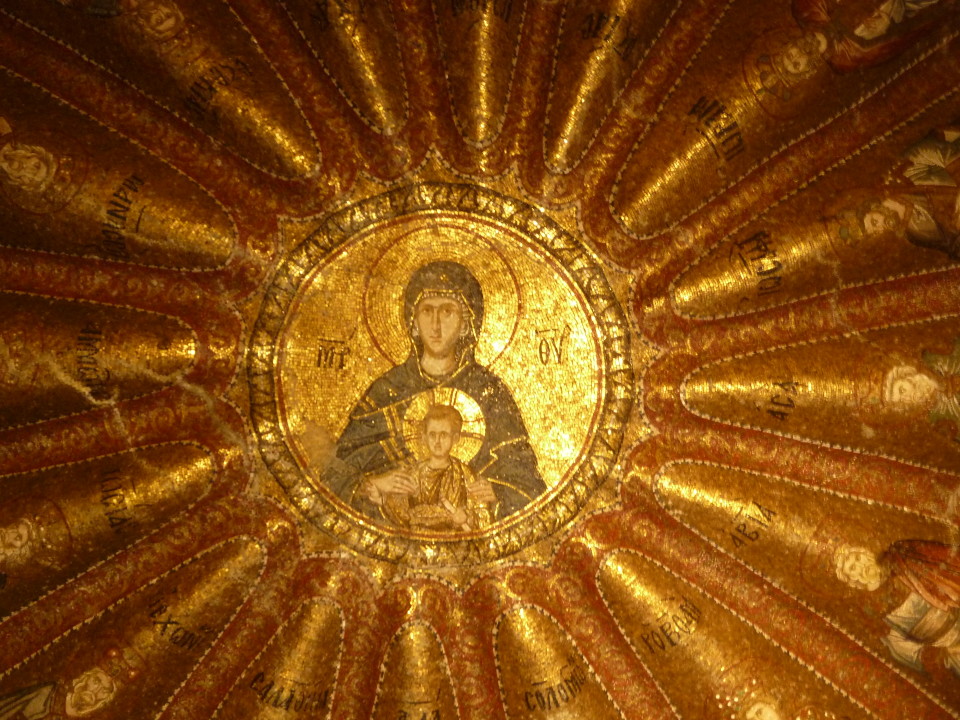 Chora Museum is No Ordinary Museum!

The sights and sounds that are Istanbul are so difficult to explain, but I tried to show you this through my streets of Istanbul article. At first, I was so overwhelmed with the mass difference between the western world and Turkey that I had a hard time describing my thoughts about this really cool capital city. It has taken me a while to get my thoughts into words, as Turkey is such a contrast and mix of places. Of course, when you visit, there are things that you must see, and I will write about them. But the one thing that struck me more than any other place I visited was the Chora Museum or Kariye Mosque. 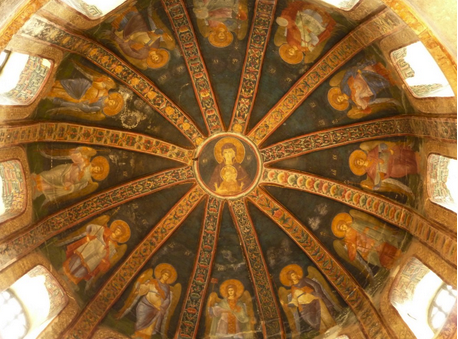 Literally, maybe it is because I am Christian and I was in a Muslim world and everything was so starkly different than what I am used to. But I have to tell you, as a Christian, there was no other place that was more mesmerizing than Chora church. Also known as the Chora Museum, the Kariye Mosque, or the Church of the Holy Saviour in Chora. This is a medieval Greek Orthodox Christian church. Today (as of lately) it is used as a mosque in the city of Istanbul, Turkey.

Even the taxi ride over from our hotel on the Bosphorus to the Chora Museum made my mind wander and my fingers click the camera every other second.  There were many great photographic shots around every corner as we made our way up the hill. We were in the Edirnekapı neighborhood. Sometimes, I felt like I could take that ride over and over again and never really describe the neighborhood towards the mountain we were climbing to the Kariye Mosque. 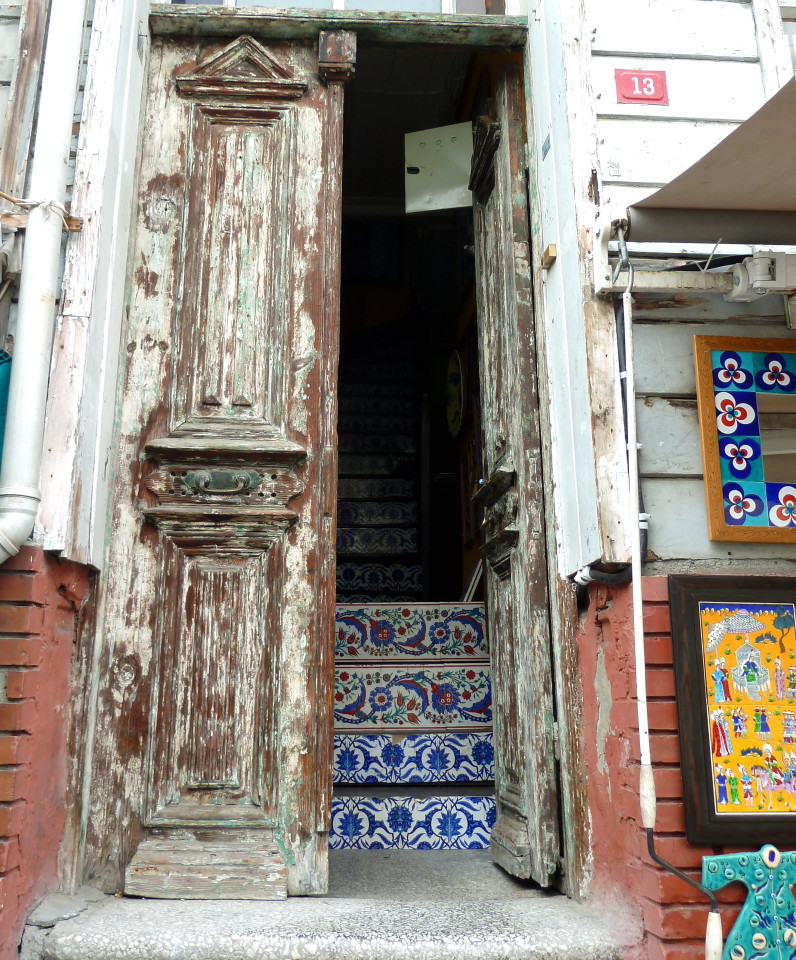 Upon arrival at the Chora Museum, I was almost questioning as to whether or not this was really the place, as it didn’t seem like anything special or spectacular could be up at the top of this neighborhood hill. But nothing could have been further from the truth. Chora Church was the highlight of the trip to Istanbul, Turkey for me. A place I can recommend to visit, and a place not to miss on your trip to the indescribable Istanbul. 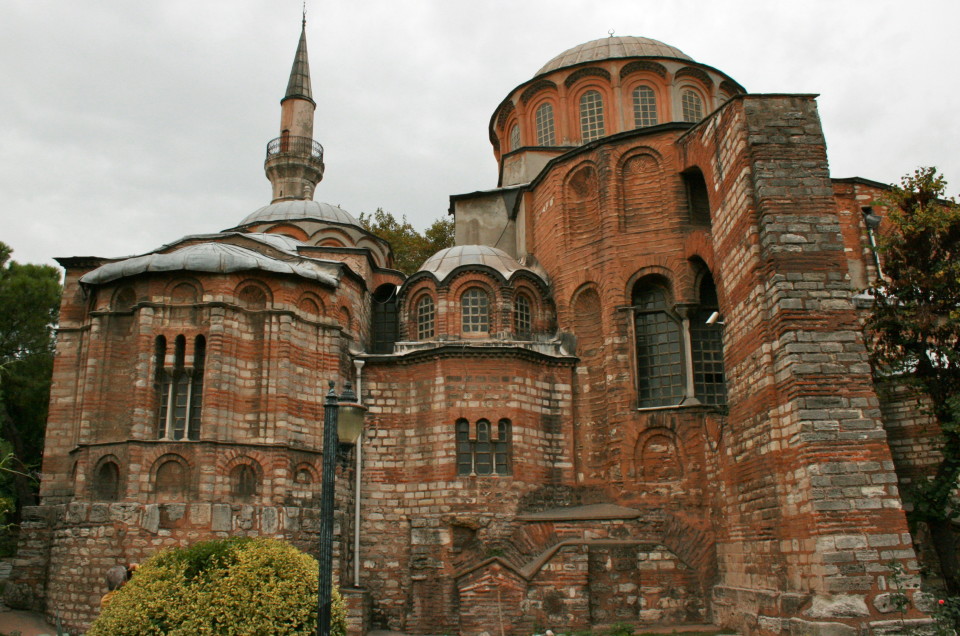 Chora Church – My First Peek Inside

Of course, I enjoyed the vendors of traditional ceramics and Turkish souvenirs before entering the church, but the outside looked like a normal, everyday church that could have been anywhere, with its dirty red brick and mortar. Small green shrubbery was planted on the outside of Chora.

Honestly, I was stunned upon entry, as this is no ordinary church/museum. 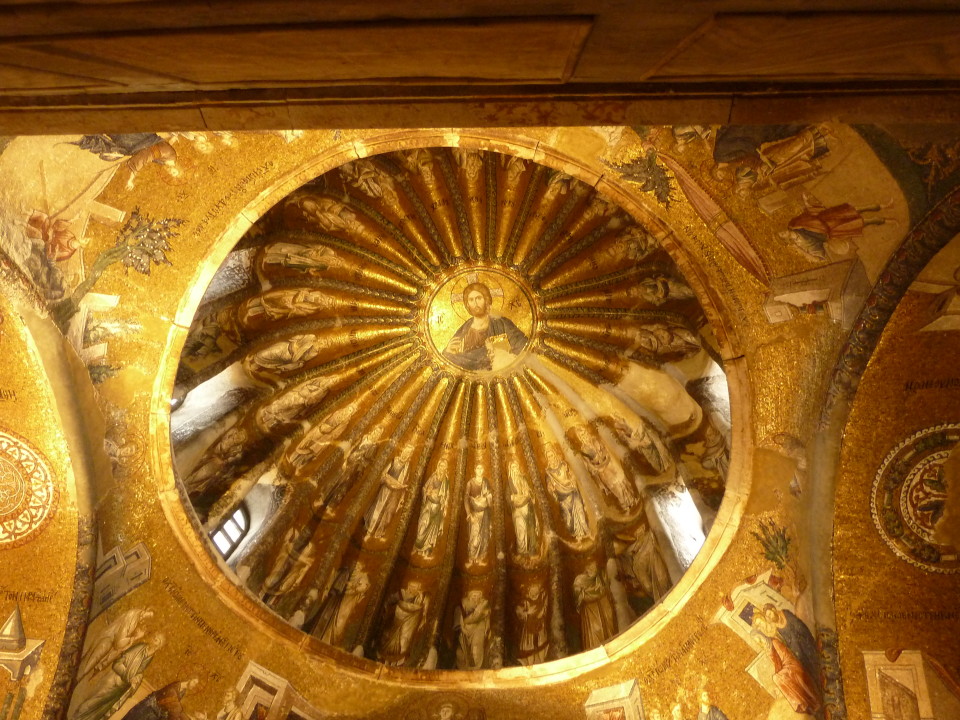 Chora Church made me Speechless

I was utterly speechless when I walked through the front door. Mosaics, frescoes, and paintings beyond anything you could ever dream about were covering the walls and the ceilings. The domed ceilings had mosaic pictures of God, Christ and his family, the disciples, and many people from the Old Testament. 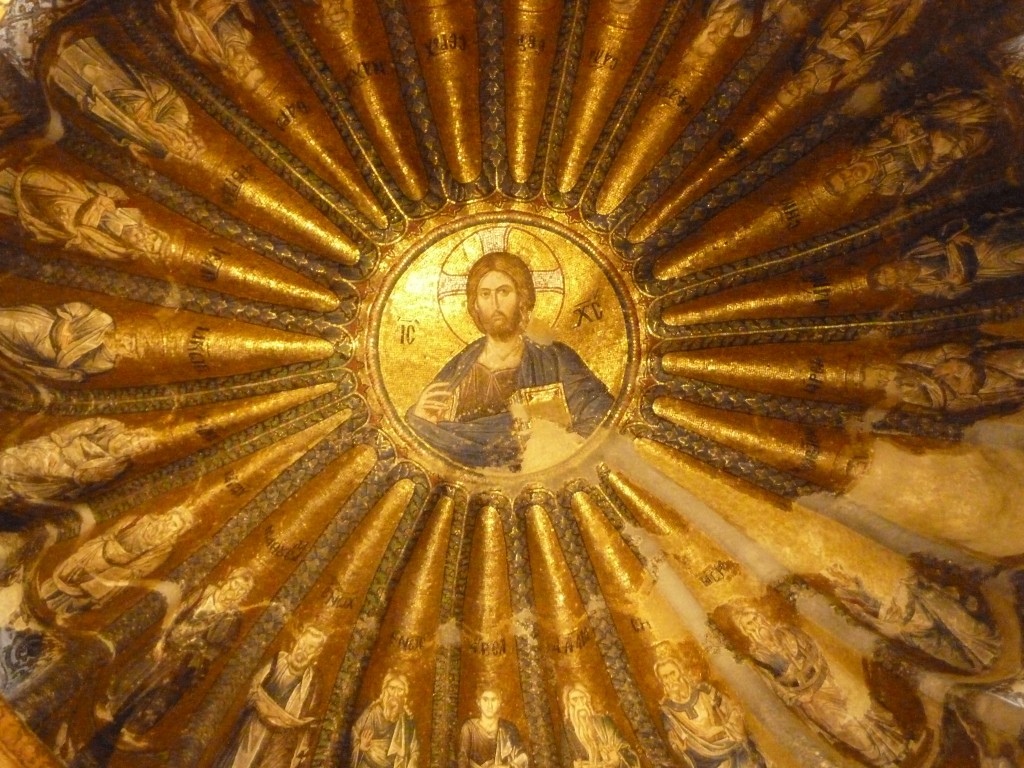 After serving as a church after the conquest of Istanbul in 1453, the building was then converted into a mosque in 1511 by Vizier Hadim Ali Pasha. Then more than four hundred years later, it was converted into a museum in 1945. It was during this time that the restoration began in 1948-1959 done by the Byzantine Institute of America. It was during this time that the full restoration to clean, restore, and conserve the frescoes in the Chora Church began. As they had been plastered and whitewashed over repeatedly to conceal all Christian imagery when the Byzantine church was used as a mosque during the Ottoman Period. The way the Chora Church looks today is the result of a lot of work done over a period of 11 years.

The first dome I came across had the 12 disciples of Christ laid out in this pattern that was stunning with windows within the dome. Speechless, there really were no words to express the feelings I have for this place. I stood there in silence and in “awe” as if time stood still. I tried to imagine the men who built this place so many years ago. The original church on this site was built in the early 5th century and stood outside of the 4th-century walls of Constantinople. 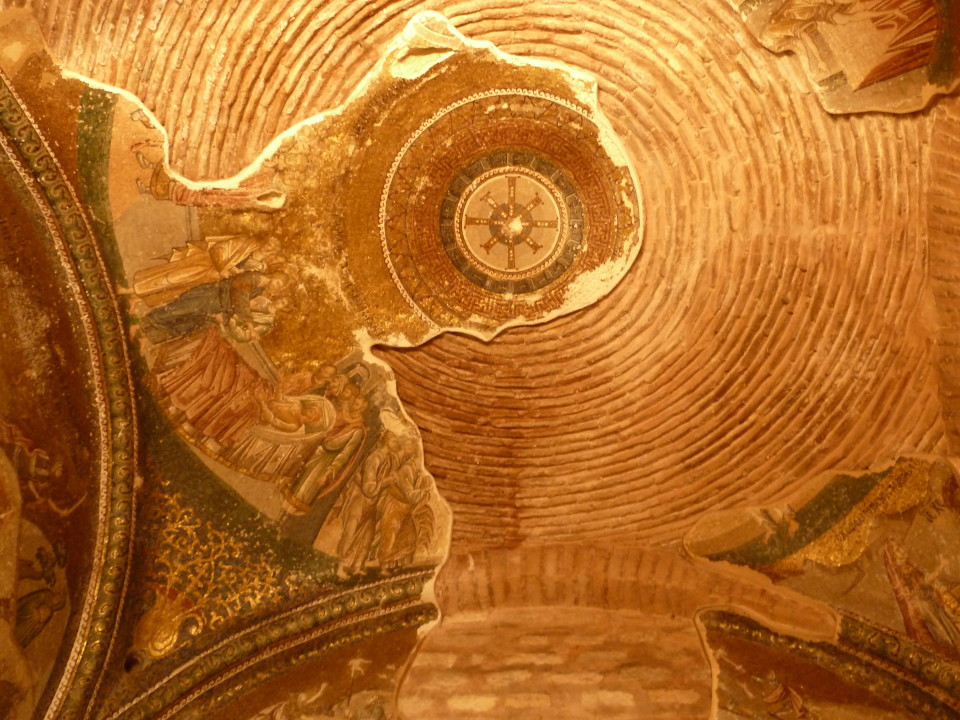 Interesting in reading more about Istanbul?

Journey Thru the Streets of Istanbul

I think looking at our past helps us to predict our future.

Inside the domed areas where the mosaics had come off the ceilings or walls, there were the under pieces of carved-out, old, red brick, with sharp edges. It was as if the caretakers of this place went to great care when the pieces of the mosaics had gotten destroyed or detached from the past.

Chora Museum – A Must Visit

Do not give up your opportunity to see this place, for me, it is THE reason to go to Istanbul. Of course, there is the Blue Mosque and the Hagia Sophia, which are both extraordinarily wonderful! But make sure you add this place to your list as well. It is not in the main area of Istanbul, where all the tourists are, so you will get a break from the crowds that skirmish about. 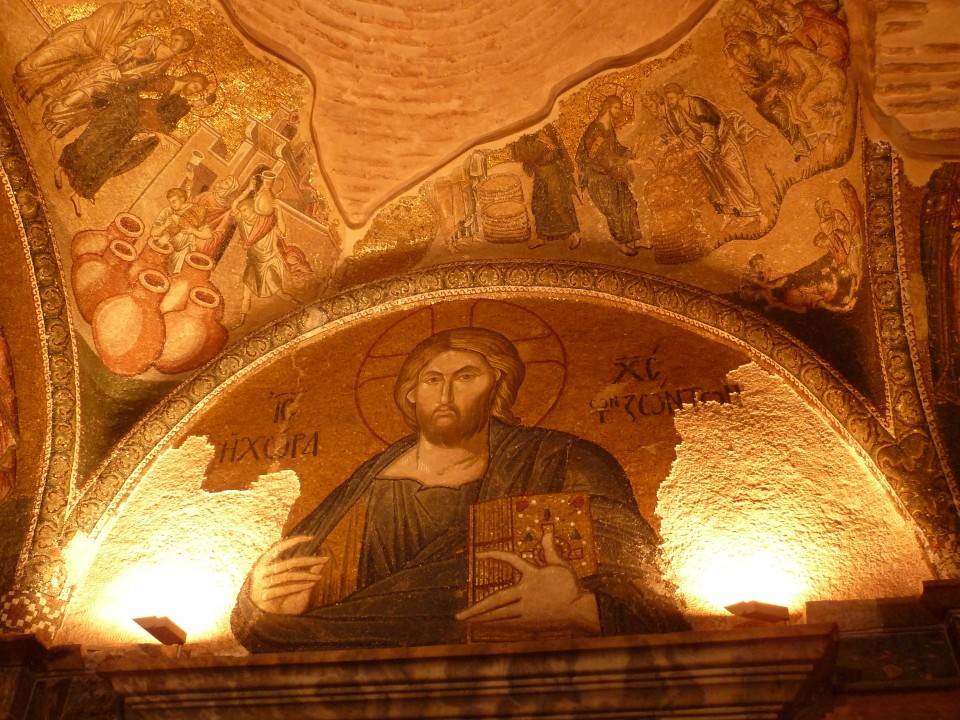 According to Wikipedia, Chora Church is considered to be one of the most beautiful surviving examples of a Byzantine (later Roman Empire) church and I would define it like that as well.

Interesting in reading more about Istanbul?

Turkey: Land of the Bizarre and Bazaar

Istanbul: Patriotism At Its Best

7 Things to do in Istanbul, Turkey 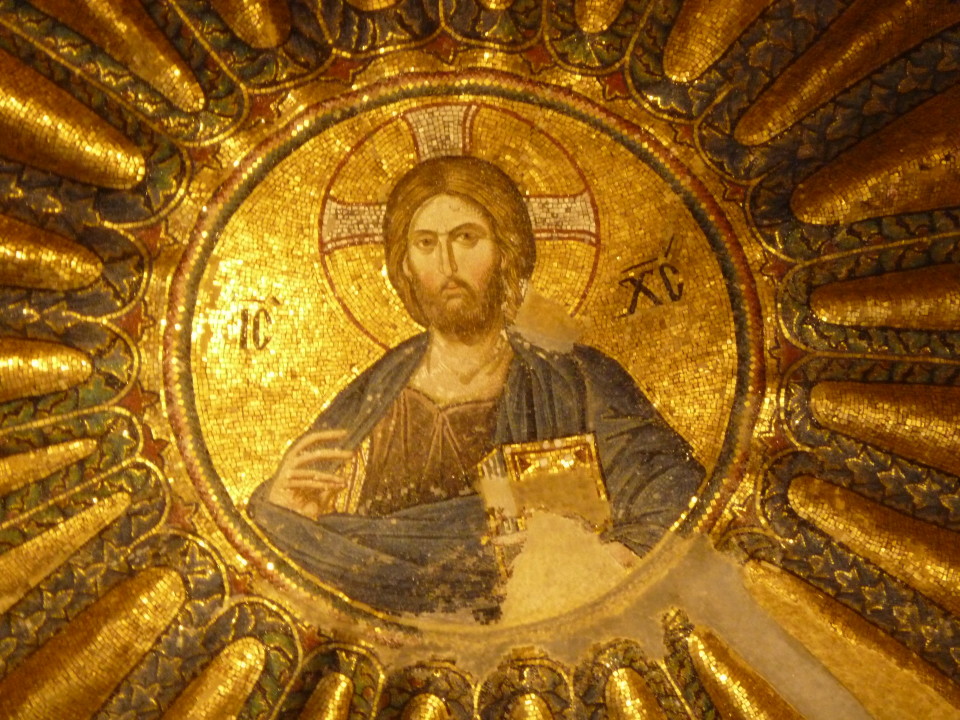 Unfortunately, Kariye Mosque (Turkish name) or Chora Museum has been closed since November of 2020. This according to local shopkeepers. The workers in the Chora Museum have removed the pulpit and screens because they were going to turn this Chora Museum into a Mosque. Someone from the Religious Affairs Presidency says that “no new opening date has been set” for the mosque to reopen. Plus, the head of the Directorate General of Foundations would not comment about it either, as they are overseeing the restoration of the Chora Museum.

UNESCO Has Given A Warning

UNESCO has dispatched people to Istanbul to inspect the two monuments. Unesco has warned Turkey that any changes may impact Turkey’s World Heritage standing. At the moment, Turkey’s abrupt decision to cancel Islamic prayers at the Chora Museum has cast doubt on any plans to reconsecrate the monument. There has been an outcry from UNESCO, foreign governments, and scholars over the risk posed to 14th-century Byzantine mosaics, frescoes, and paintings that are inside the building. This building is known as the Sistine Chapel of Istanbul and is quite stunning, to say the least!

Concealing the art at Chora, whose walls, floors, and ceilings are clad in masterpieces from the dawn of the Renaissance, will prove challenging. Motorized blinds mounted to the walls are feared because these actions could harm the art inside the Chora Museum.

Church of the Holy Saviour in Chora

As mentioned before, Chora church was built in the early 4th century as a chapel outside the city walls of Constantinople. It was built by Constantine the Great. The Chora museum was one of the oldest religious monuments of the Byzantine era and of eastern Orthodox Christianity. 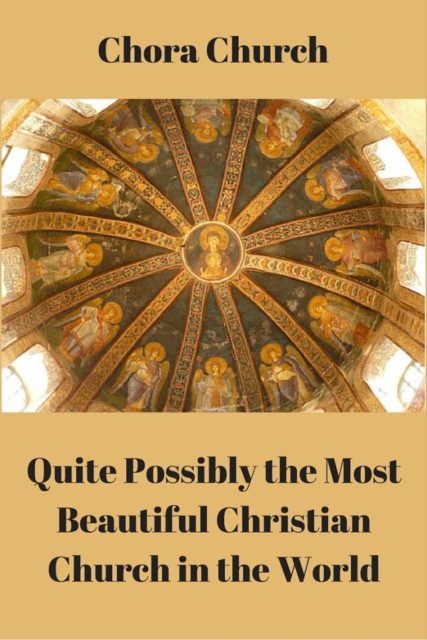 The literal meaning of “chora” in the Greek language is “country”. The chapel was called “chora” as it was located outside the city walls of the city of Chora. It’s believed that the land where the chapel was built was the burial site of Babylas of Antioch and his disciples. The word also refers to “land”, referring to its location and has a symbolic meaning, as the mosaics of the church describe Christ as the Land of the Living.

Chora Museum is a Landmark Monument

For almost 2,000 years, Chora Museum has remained one of the landmark monuments of Turkey, Istanbul. It also represents the complex and deep culture of the city — the Byzantine Constantinople, the Ottoman Istanbul, and the cultural capital of the secular Turkish state.

Hi Cacinda, it's a great post. I liked it. Actually Chora Church is also my favorite church. I was stunned when I got there for the first time, with the beauty of mosaics. Medieval ages always inspired me. Byzantine history and mosaics just perfect examples of mysterious medieval ages. Thank you. Cheers.

Istanbul is on the SHORT list! Phillipines this year,,,maybe next?!?!

Philipines sounds great! Let me know about your travels!

It's a shame that your mindset prevented you from appreciating the fullness of culture to be discovered/found in Turkey. To me, the real monuments in Turkey are the incredibly helpful and down-to-earth people of Turkey.

It really is one of the stunning places to visit in Istanbul and surprisingly not a lot of tourists venture here. I didn't have time to revisit this trip but it certainly remains one of my favourite sites to see along with the Rüstem Pasha Mosque

Jenny, I absolutely loved this place. The ride up there was amazing and the actual church was stunning. I do not see why people don't flock to this place. I am Christian, so that makes me love it more.