What do a cat, a pet turtle named Sonny, a 7-year-old wearing a life jacket, and a tightrope walker all have in common?  Just the growing list of those plunging over Niagara Falls, either by choice or otherwise! They basically all got sucked through a water hose of 180,000 pounds of water pressure at record speed. Can you imagine the pull of that water? 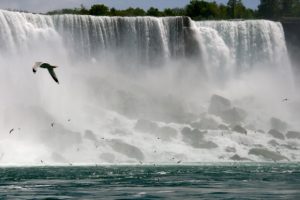 I can not even relate to those who actually wanted to go over the falls for fame or fortune. So let me fill you in on a couple of Niagara Falls fun facts! As I was surprised to learn a few of these amazing Niagara Falls facts when I was trying to gain some perspective on the Niagara Falls waterfalls. Here is a collection of a few interesting Niagara Falls facts, but before you go, be sure and stop by Canada’s prettiest little town: Niagara on the Lake. So just where are the falls?

#1 The Falls are Made Up of Three Waterfalls

The Falls are basically a collective of three waterfalls that straddle the international border between the USA and Canada. They are the Horseshoe, the American, and the Bridal Veil Falls. The Horseshoe is the largest, has the least amount of rocks down below, and is on the Canadian side.

The American is obviously on the American side of the lake and is broken into two falls: The American and the Bridal Veil. It has such a conglomerate of jagged rocks at the bottom, that most people who chose to go over the fun waterfalls do so on the Canadian side, at least the ones who want to survive.

Want to learn about Things to do in Niagara Falls in the Winter?

Facts about water from the Niagara Falls

History Facts of the Niagara Falls

#5  Where is Niagara Falls in Canada?

I took the Niagara Falls waterfall tour on the Canadian side. I had always wanted to see it and when the moment arose, I jumped on it. Typically, I am an independent traveler, but on this trip, I was pressured for time and so chose to go with King Tours. Amazingly, their driver (and owner of the transportation side) Kevin picked me up from the Westin Bristol Hotel at the Toronto Airport and drove me to the tour operator’s pick-up spot. This was a huge saving of money and time to get me there and that is a service I really appreciated. 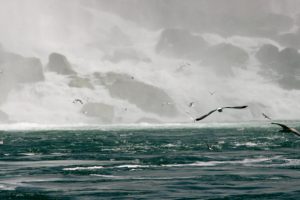 Altogether, the waterfalls are named Niagara Falls. They consist of three different waterfalls mentioned below and the Niagara River serves as an international border between the USA and Canada. There are two distinctive cities where you can visit the falls: Niagara Falls Ontario, Canada, and Niagara Falls New York, United States of America.

And just in case you were wondering, the Niagara River connects two of the five Great Lakes: Lake Erie and Lake Ontario.

Do You Need a Niagara Falls Address for your GPS? 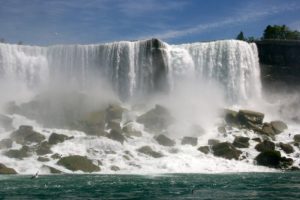 The Niagara Falls waterfall from the Canadian side was spectacular.

One of the most fun things to do in Niagara Falls Canada is to do the Maid of the Mist boat tour. Once you get through the line, you get your allotted blue rain jacket and, in my case, board right away. Soon the Midst takes off toward the American Falls and you are practically underneath the Niagara Falls waterfall with the mist and birds swirling everywhere. It goes from the dock to the American/Bridal Veil Falls, then to the Horseshoe Falls, and back. 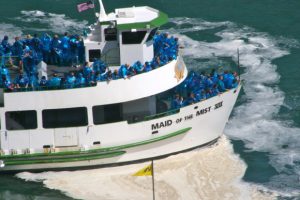 Where exactly is Fun Niagara Falls?

Niagara Falls is made up of three different waterfalls: the  Canadian “Horseshoe” Falls in Canada, the “American Falls” and the “Bridal Veil Falls” in the United States of America.

If you want to know what cities Niagara Falls is closest to:

So where are Niagara falls in Canada? Now you know where Niagara Falls are!

Where is the fun in Niagara Falls? 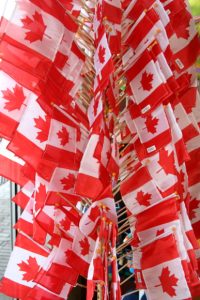 I thoroughly enjoyed my day at Niagara Falls Waterfall. But be prepared for a long day!

I have not had a chance to visit Niagara Falls from the American side, so be sure to let me know in the comments if you have and how it was!

The Ultimate Guide to Iguazu Falls (Both Sides)

Getting to Know Hierve El Agua – The Petrified Waterfall of Oaxaca

Disclaimer:  My tour of Niagara Falls Waterfall was courtesy of King Tours. My opinions are completely my own. You can also reach them at Torontotours.ca. Thanks to Salim for being a great driver and just an all-around, happy guy to spend the entire day with. Thanks also to the owner Robert for being so excited to have me on board and also for loving travel so much! And Kevin, thanks for picking me up at my airport hotel! There are affiliate links in this article.

Thanks Captain Aux for reading! Kitchy, but I tried to ignore that part and just concentrate on the Falls. They are stunning.

Got a day tour there, once. Same experience--kitchy, run-down wax museum junk in "town", but a great tour of the Falls from the boat! Thanks for sharing!

That's what i had always said. I had one opportunity back in college, while visiting in upstate New York, a lot of friends were taking off to go see it, but I was so tired, I declined. So now many years later, it came up again. I think it is at the very least worth a visit. thanks for the compliment about the photos, I have so many more, and had a hard time picking, as they were all the same after a while,

I would love to visit one day, great photos.