Home » Destinations » Swimming with Beluga Whales in the Wild

Swimming with Beluga Whales in the Wild! 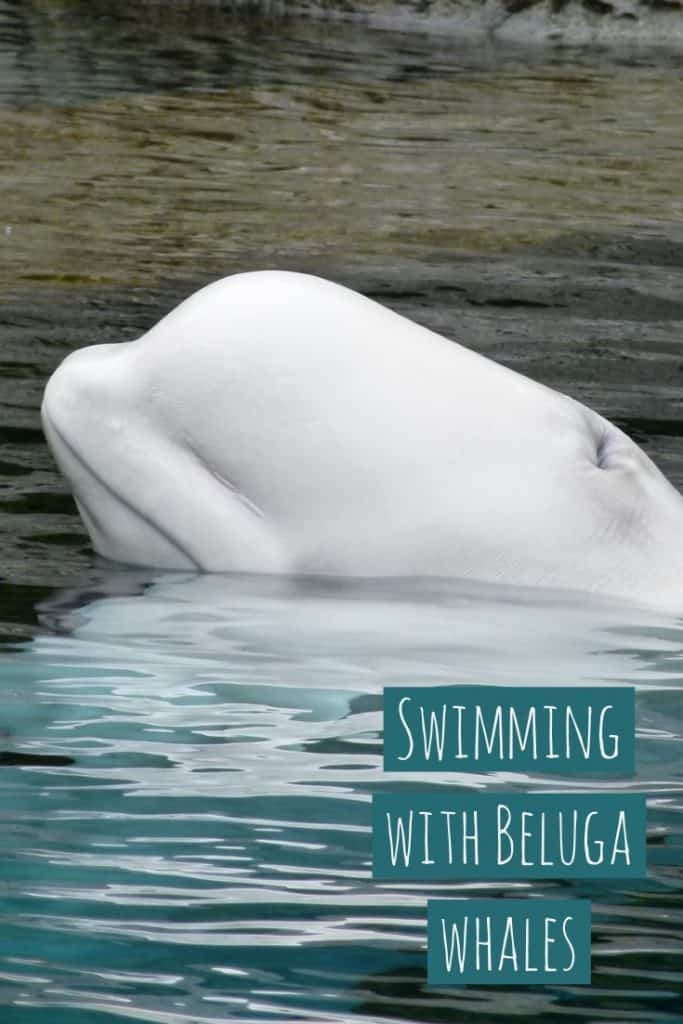 Have you ever wanted to go swimming with Beluga Whales? I hadn’t even heard of this until I heard about an expedition up in Manitoba Canada where you could do just that! I mean, who doesn’t love seeing Beluga babies with their mommas while whale-watching in the Hudson Bay in Canada? Between mid-June to September, one of Canada’s most incredible wildlife display actually comes alive — beluga whales come for a visit. More than 50,000 of these creatures patrol the Arctic in Northern Manitoba and the Hudson Bay coastline.

On day two of my trip to Churchill, the weather wasn’t as good as when I went kayaking with those beluga whales. The day looked overcast and cold outside, but the Canadian guides decided that this was our only chance to go swimming with Beluga Whales! I was actually going to get into the freezing Churchill River at the mouth of the Hudson Bay and go free diving with these whales. Which is crazy if you think too long about it! But I was game and ready for this wildlife adventure. 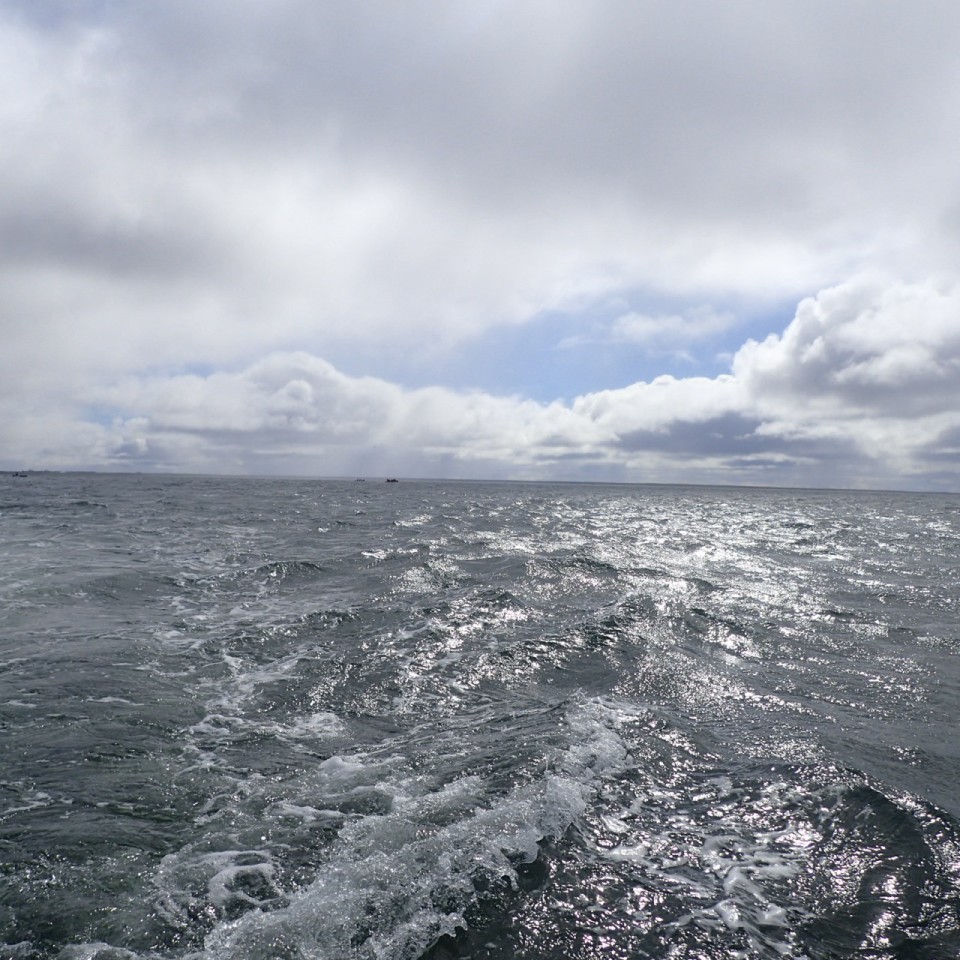 Swimming with Whales Requires Getting suited up!

We all went for it even though it was cloudy and cold. I got suited up to go diving with whales in long johns, a thin layer of pants, then the wetsuit on top of that. Later I put on my soft-shell ski jacket liner and then a dry suit (yes, it was that cold). I was extremely bulky and I looked like the Michelin man, but I didn’t care!

My group made our way down to the dock from and sped off in the Zodiac in the freezing water with not a single beluga whale in sight. Hmm, things did not look good. We searched and searched, but there were no sightings of them, which was unusual because just the day before there were literally hundreds of them near where the kayak put-in was. We were in one of a group of two zodiacs, our group had the bad-ass girl guide JUD (if you ever go there. you will know what I mean, just look at the photo below.) 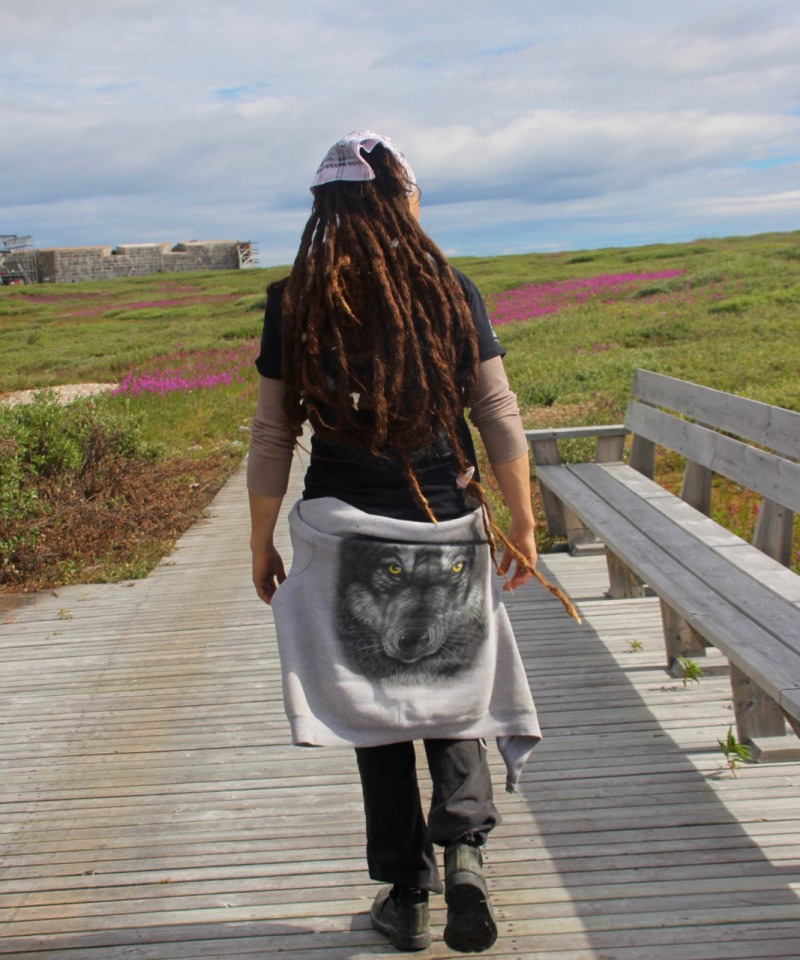 Our girl guide, JUD, and this is a photo of her without her gun!

Get a Badass Guide First!

JUD decided to take off in a different direction than the other zodiac and we continued to search. Suddenly she caught sight of a few beluga whales when honestly I thought they were white caps in the ocean! (that is how rough the “seas” were and how much of a professional she is).

She drove toward them and stopped.  It was now or never!

I jumped in the freezing water ready to go swimming with the Beluga Whales. The water was super cold (about 40 degrees). This was the Arctic after all. I had volunteered to be at the end of the rope, as I had heard that was the best spot to be able to see and interact with the whales. Hand-over-hand on the rope, I pulled my way to the end of the rope in the freezing water.

The zodiac boat pulled two ropes behind it. Another girl was at the end of the other rope, it was Canadian Kim Gray of Toque and Canoe blog She started humming and then kinda singing lullabies to the beluga whales. As we had heard that they were attracted to sounds in the water. 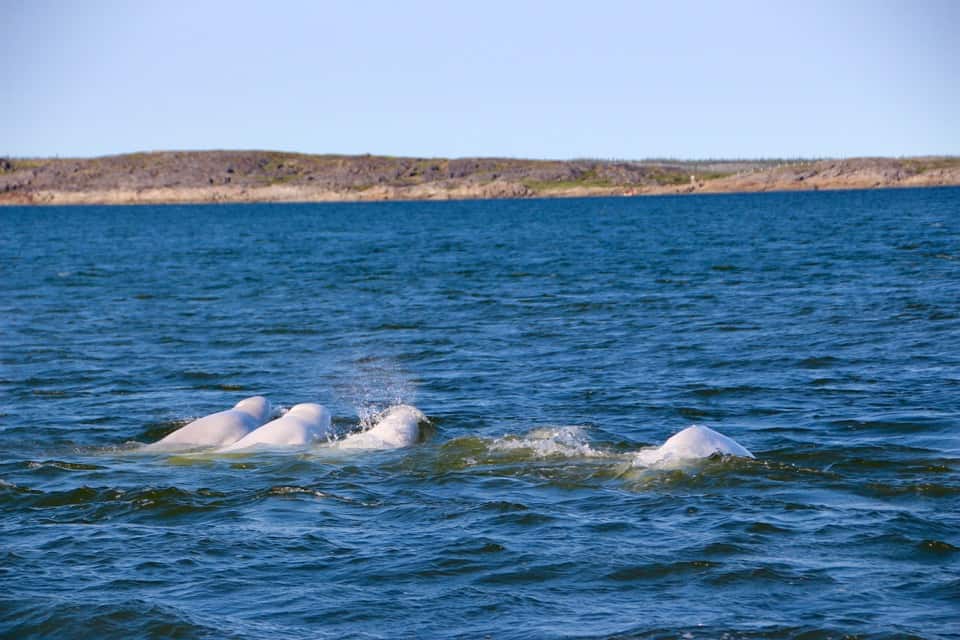 Only a few Beluga Whales

I was out there for a good 25 minutes when I only saw two belugas pass by me at least 6 feet away. And I was freezing, so I decided to go back in. I could just view them from the boat, as I decided I had had enough of the cold water. Once I and other snorkelers came in, we kept watching Kim at the end of the rope. She was humming and we noticed that the beluga whales started to swarm around her and the boat! 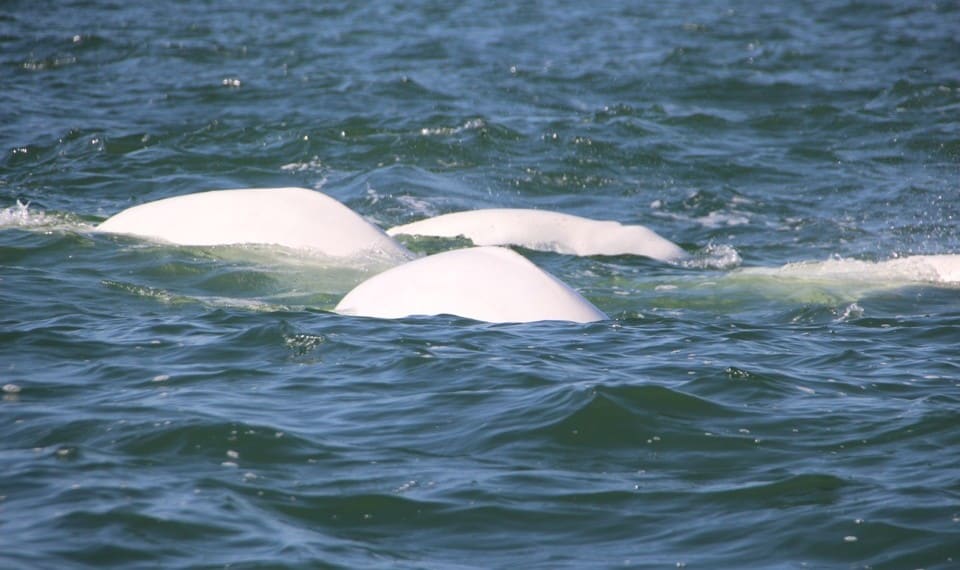 Since there were so many beluga whales swarming the boat, the guide told us to put our faces in the water, so that we could view them better. Well, of course, I did this immediately, but then I accidentally fell in face first! LOL! So now here I am in the freezing water again, when JUD asked me if I wanted to go back out on the rope. I decided at that point to just go out on the rope and WOW! I am so glad I did. 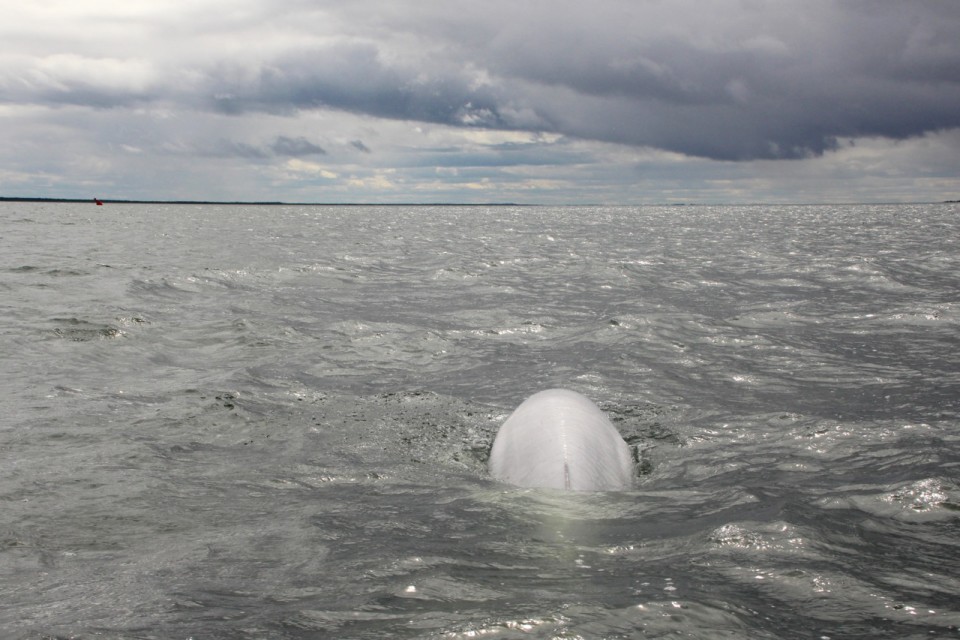 Swimming with Beluga Whales in the Wild is an experience I will NEVER forget! 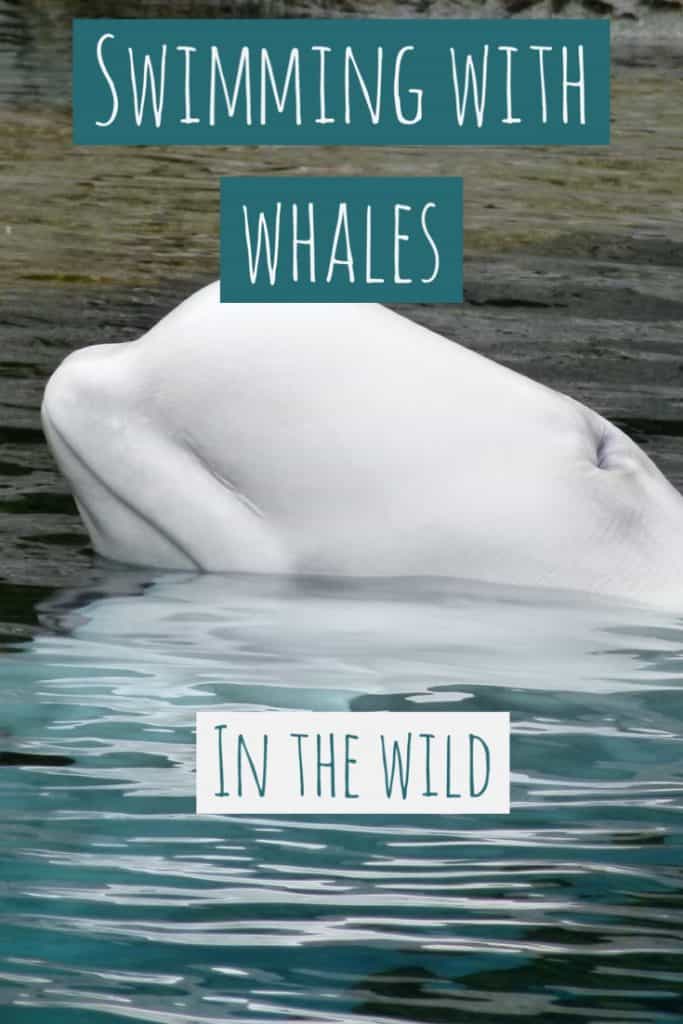 ‪This is one experience I will NEVER forget, free diving with whales! 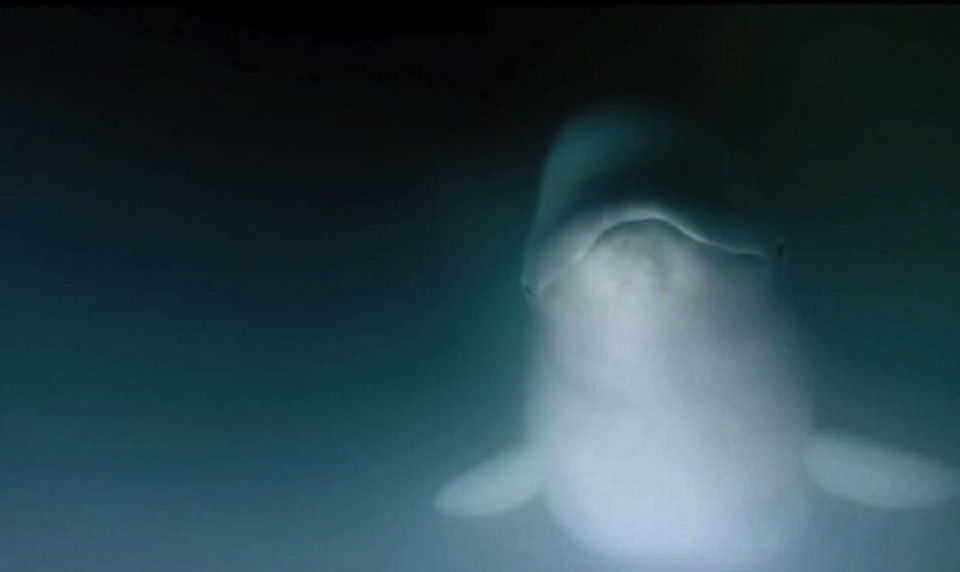 Too bad I don’t have more great photos, as the visibility was not great, but I do have fond memories of one amazing week in Manitoba with beluga whales, memories I will never forget!

What do Beluga Whales Eat?

You may wonder, what do beluga whales eat? I thought about that too while I was under the water with them, hoping they didn’t want to take a bite out of me! Apparently, what beluga whales eat does vary according to the region they are found in and the season, as they are opportunistic feeders.

Since the beluga babies and the beluga whales were in the cold, cold waters of Manitoba, their diet ranges from fish (such as sculpin, flounder, salmon, herring, Arctic cod, smelt, and capelin) to invertebrates like squid, sea snails, shrimp, and crabs, as well as marine worms (bristle worms) and even large zooplankton. Belugas feed on the bottom of the ocean as well, even though they are considered to be at the top of the food chain! 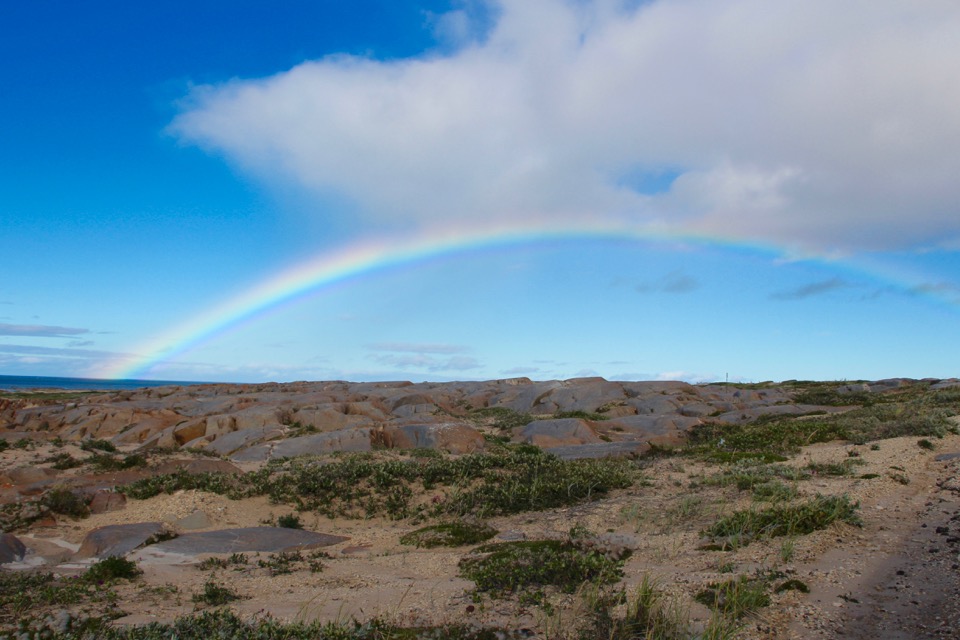 So there you have it, what it was like freediving and swimming with beluga whales! A spectacular experience that I would love to do again!

Want to read more about Manitoba, Canada? Here is some recommended reading:

And Some recommended reading about Canada’s Train Journeys:

7 Things You Will Not See on the Rocky Mountaineer

In the Lap of Luxury – The Rocky Mountaineer Train

A Trip of a Lifetime – Riding the Rocky Mountaineer

Disclosure: As is common in the travel industry, Dr. Maloney was provided with accommodations, meals, and other compensation for the purposes of review by Travel Manitoba and Lazy Bear Lodge. While it has not influenced her review, PointsandTravel.com believes in full disclosure of all potential conflicts of interest.