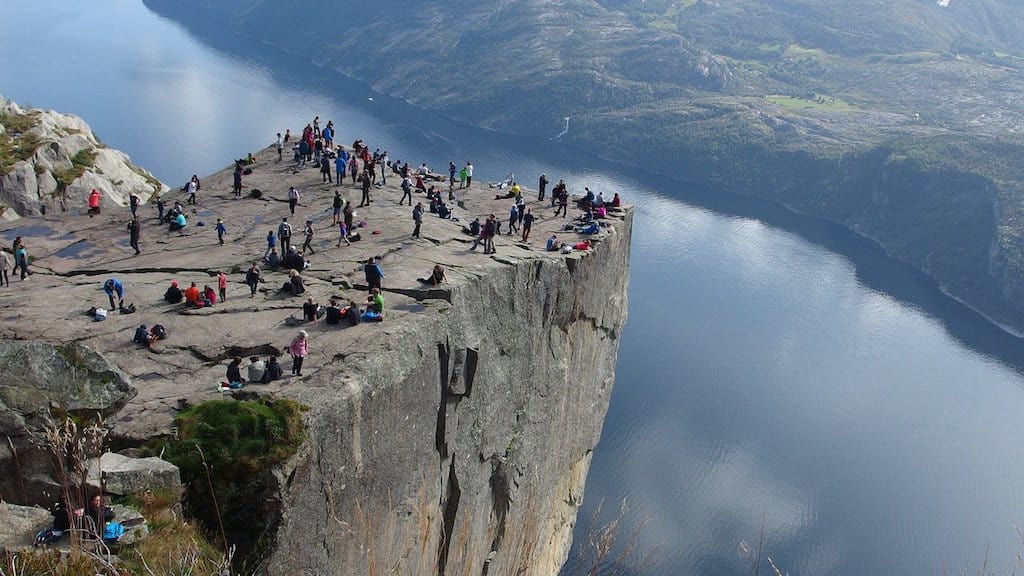 Pulpit Rock, better known to Norwegians as Preikestolen in Norway is a steep cliff that rises almost 2000 feet above Lysefjorden with a flat top viewing platform. It was formed by glaciers more than 10,000 years ago. I am sure you will recognize it by its famous photographs.

Preikestolen attracts thousands of tourists from all over the world, which makes it one of the main places to visit near the town of Stavanger, Norway. They welcome more visitors than any other trekking-destination in all of Norway. In fact, in 2019, Preikestolen attracted a record number of 309,956 hikers that made their way on the Preikestolen hike above the Lysefjord. 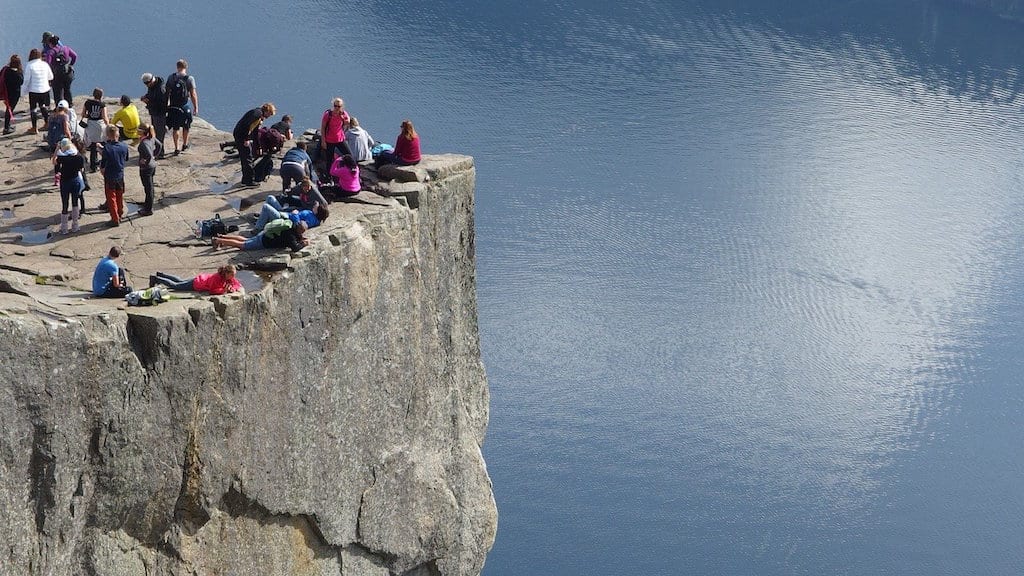 Apparently a few years back, some stonemasons and sherpas from Nepal have made some improvements on the pathway up the Pulpit Rock hike. They built steps in the roughest areas of the hike and made a rocky trail where the mud and dirt once was. This was to help minimize the impact tourists have on the environment.

I don’t know why, but I had in my head that I wanted to climb that mammoth rock with its 2.4 miles of hiking trails that mostly go straight up and have views that go as far as the eye can see. I was alone in Norway for the first time and this was my only chance to do it. 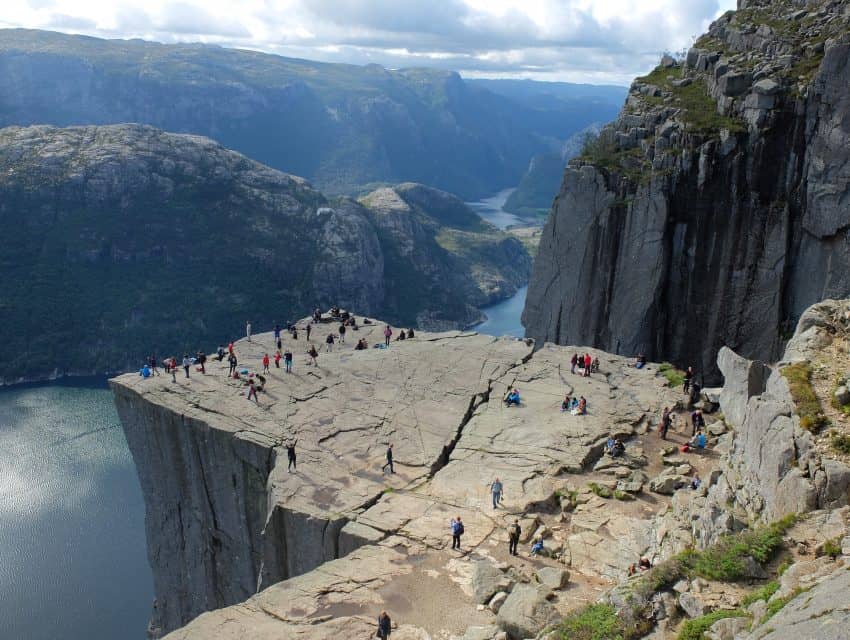 Here is my experience hiking Pulpit Rock or Preikestolen:

Getting To Preikestolen, Norway

I button up my jacket as a slight drizzle begins to appear in the early morning.  This was not what I wanted, but it was the day I was given for my hike out to Pulpit Rock.  I am staying at a hotel in Stavanger when the bus arrives right on time. I am amazed at how quickly the bus keeps on track. They are not on Mexican time, this is Norway! I get dropped off at the ferry with the sign to Tau and it starts to pour down rain, so I am beginning to wonder if this idea to climb Pulpit Rock will become a reality today.

Take a Ride on the Ferry

This massive, black-hooded ferry pulls up like a stealth machine and manages to get all of us standing in line and the vehicles onto the deck in a manner of minutes. Up an elevator and I am out of the rain and now on the lounge floor of the ferry. But what I really wanted to do was see was the view from outside and not through a glass window, so I stepped outside. 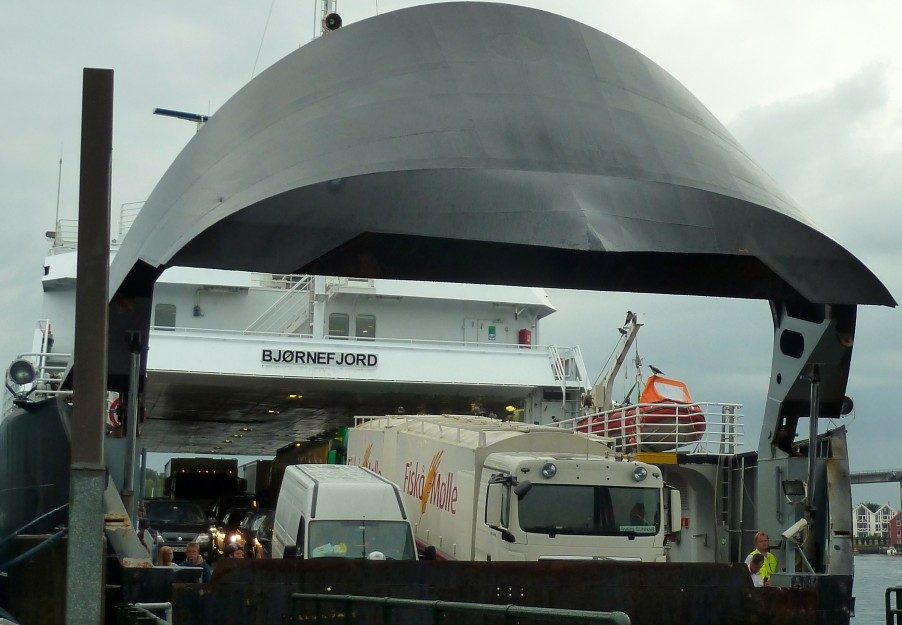 Sheets of rain, then droplets begin to make me realize that no good photographs will be taken out on the deck and so with a slight shiver I stepped back inside. Once the ferry arrived on the other side of the fjord, the bus to Pulpit Rock is there waiting for a handful of us adventure seekers questioning our decision to make the 2.4 miles Preikestolen or Pulpit Rock hike/climb that towers almost 2ooo feet above the Lysefjord. 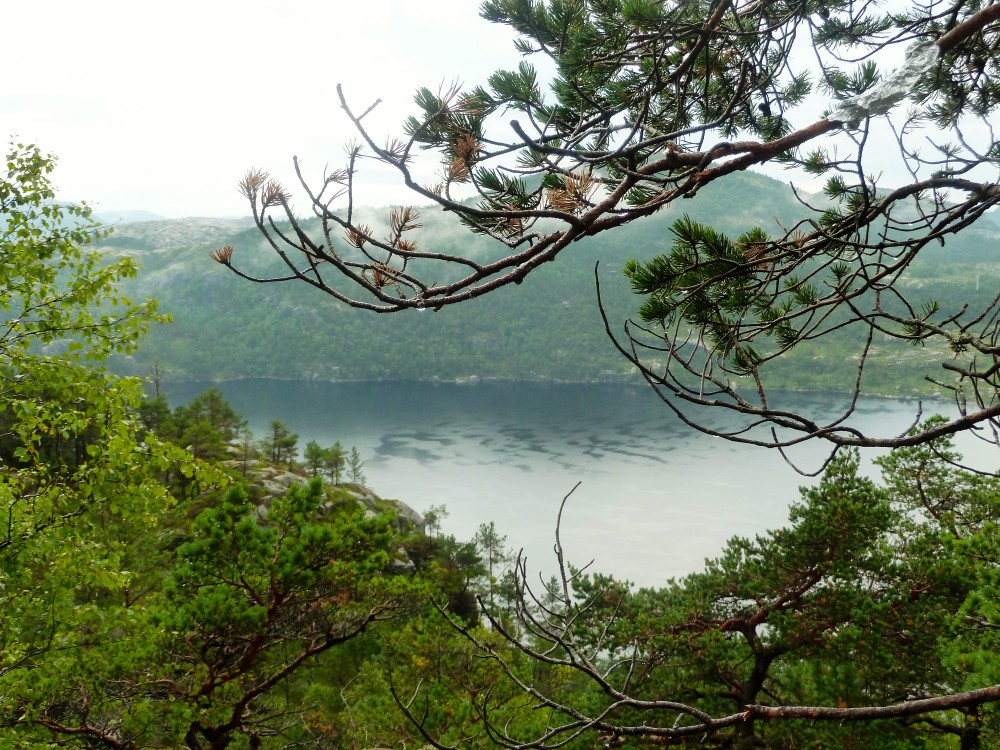 Sometimes vacations don’t allow for changes in the schedule and this is one of those times. It would be my only chance, so I pressed onward, not knowing how the day would unfold. But so far, the trip from Stavanger to Pulpit Rock has been pretty easy to do. 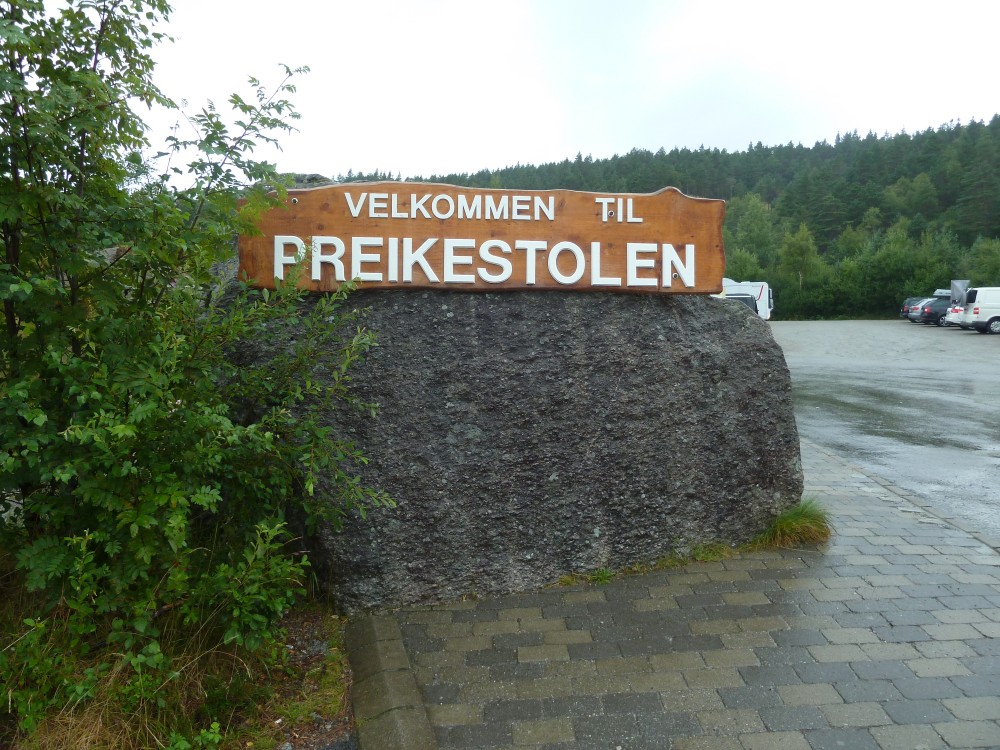 Norway: 16 Amazing Things To Do During a Norway Winter

You can Hike Preikestolen, too!

With a quick 15-20 minute wind up the mountain to the base camp on the bus, the rain started to lighten up, so things were looking better. The hike takes approximately 4 hours to complete. It is some of the roughest terrains I have ever encountered, as it is no walk in the park!

I was amazed at the number of tourists who brought everything from full 50 lb backpacks to dogs, to 2-year-old kids on their backs. I also saw a pregnant woman and a woman with a baby strapped to her front, a backpack on her back, and a dog. She gets my vote for woman and mother of the year! I could barely navigate the terrain and she had all these extra obstacles to contend with. 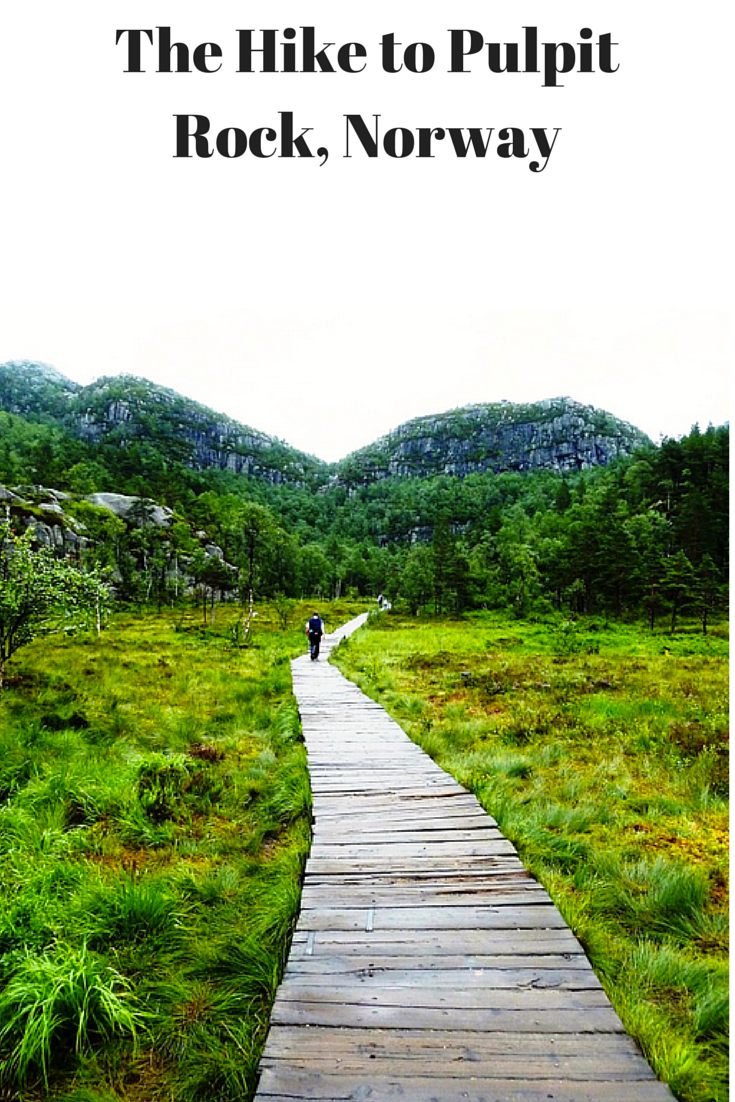 As I begin to take off up the steep trail with imposing views, I almost immediately begin to huff due to the upward climb. I was told that the beginning leg is one of the hardest, yet I soon realize I will take the slower path and just try to pace myself. 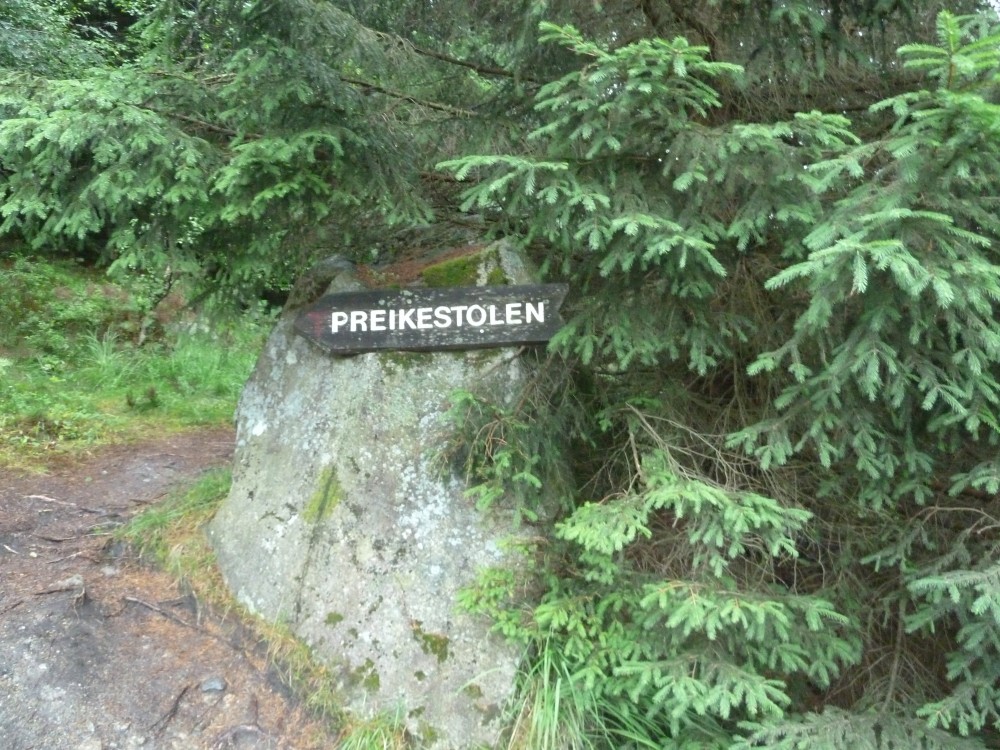 Looking around the area, it is the perfect combination of landscape, nature, and a great place for photography. The climb takes quite a few turns and is steep, but then there are plateaus, a few bridges, and many rocks to climb. I press onward. I am alone, but somehow, I am never alone and I get lucky.

An American traveler Jen Cowel, whose husband and grown children are on the fast track to the top is lagging behind her family and she and I decide to hike the trail together.

I have read many places online saying that this hike is suitable for all ages and fitness levels including elderly and kids. I have to disagree. I am on the shorter and heavier side than most and I found it quite difficult, as well as the other traveler I went up with were also huffing and puffing. There were many who did not make it to the top.

There are rest areas and areas of a plateau, but the very beginning and the very end were the hardest. I would rate it a 5 out of 5 for difficult terrain, so be sure to keep that in mind. 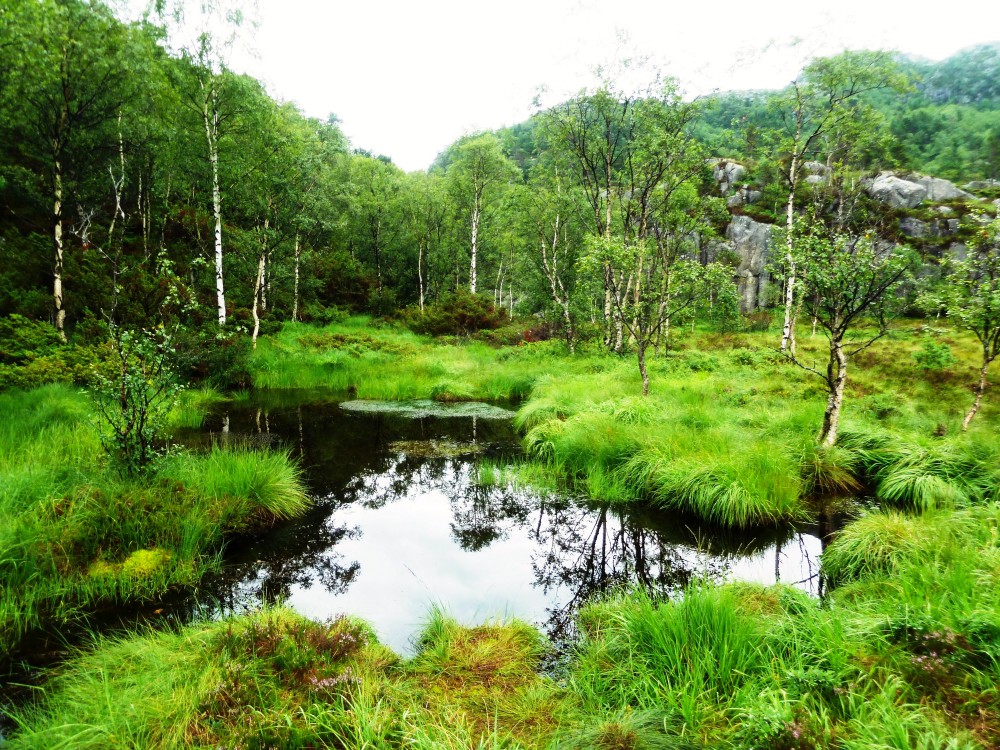 “I am insignificant, but part of a bigger picture as I look out to the vastness of the rocks, the wilderness, and the mountains.” – Cacinda Maloney

There are benches and places to stop along the way for photographs, with the crowds coming in from behind us as we are on the slower route, but we eventually make it to an amazing viewing platform where I was able to take a few photographs before the rain started up again. By the time I made it to the top I was soaked through and through, exhausted, and had rain droplets on both of my glass lenses. It was not an ideal situation for me to take photographs, but I will leave you with the best I had to offer from that day. 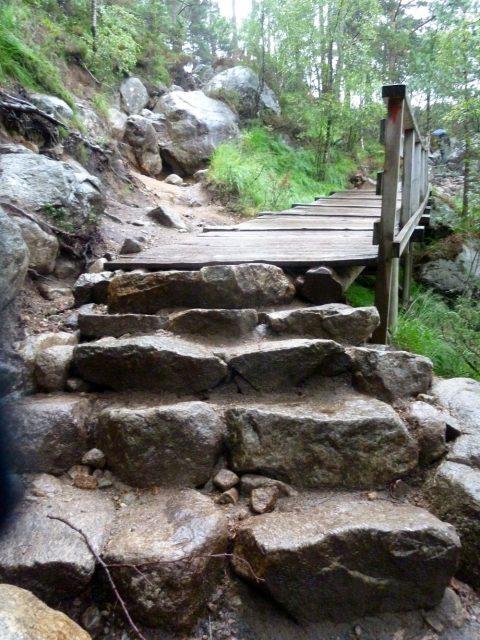 The hike to the plateau takes about two hours each way (so four hours round trip). The starting point is around the mountain lodge Preikestolen Fjellstue, however, it seems most people are there for the one day hike only. This area does provide for bathrooms, water, and there is plenty of parking if you are self-driving. 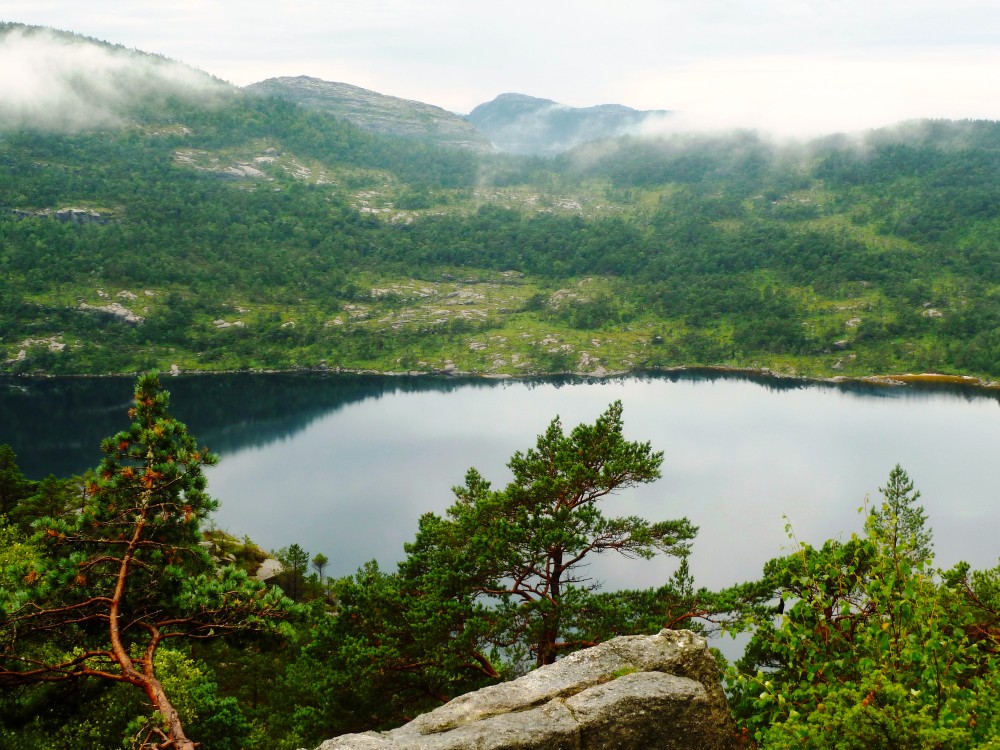 How to Get There: Stavanger to Pulpit Rock

There are two ways to get to the starting point of the hike: by bus or car. Both modes of transportation involve a ferry crossing on which you and the automobile can be on. The timetables for ferries and other local transport is easily accessible at the Stavanger Tourist Office. 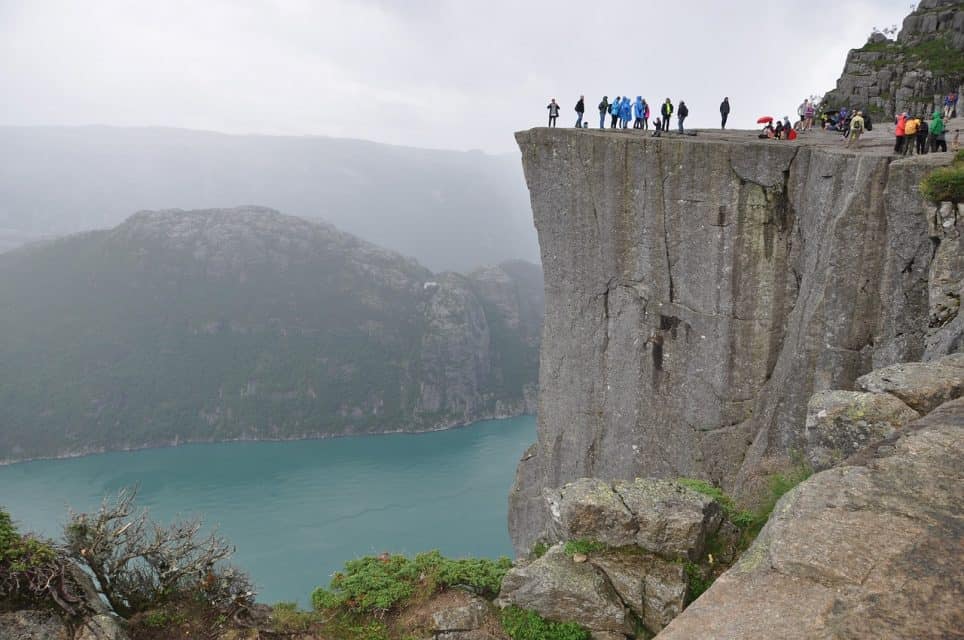 If you are like me, I didn’t have a car, so the bus and ferry system worked like a charm. I was there during the summer and took the local bus to the ferry from Stavanger City Center to Tau. Onboard the ferry I bought my ferry ticket, so no stress there about trying to find how to purchase a ticket. Once I arrived on the other side of the fjord, there was a bus that took us straight to Pulpit Rock base camp. The travel time from Stavanger to the other side is about an hour.

You can meet at the ferry station from Stavanger on Rv13 to Tau and then follow the same road south (or follow the city bus!). Preikestolen Fjellstue sits by the Rv13 south of Jørpeland. Or, of course, you drive the long way around, see map Norway below: 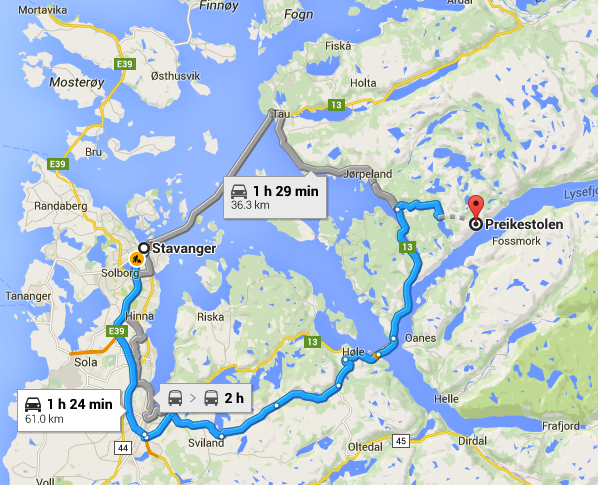 Be sure to start early, since it takes time on the bus system from Stavanger (for me 20 minutes), plus the 40 minutes to get there and the 40 minutes back on the ferry, the next bus ride is 20 minutes each way, then 4 hours to climb and 1 hour to enjoy the view and photograph, which is approximately 7 1/2 hours to complete the whole journey. You will surely be tired, yet inspired when you get back to the hotel or to the restaurant to have some beer! 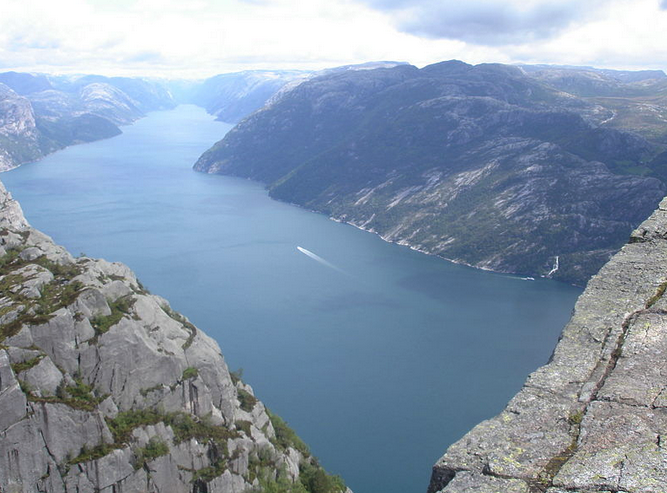 Pinners, Pin this one!

Preikestolen Hike – Do I need to join a tour group?

I went on my own, but you can if you want to. I was able to navigate the hike on my own by following the path of the well-marked red letter T’s. This is the way they mark trails in Norway. The path is easily routed and I walked mostly on rocks that were stacked on top of each other and on wooden boards laid on the ground like a deck. 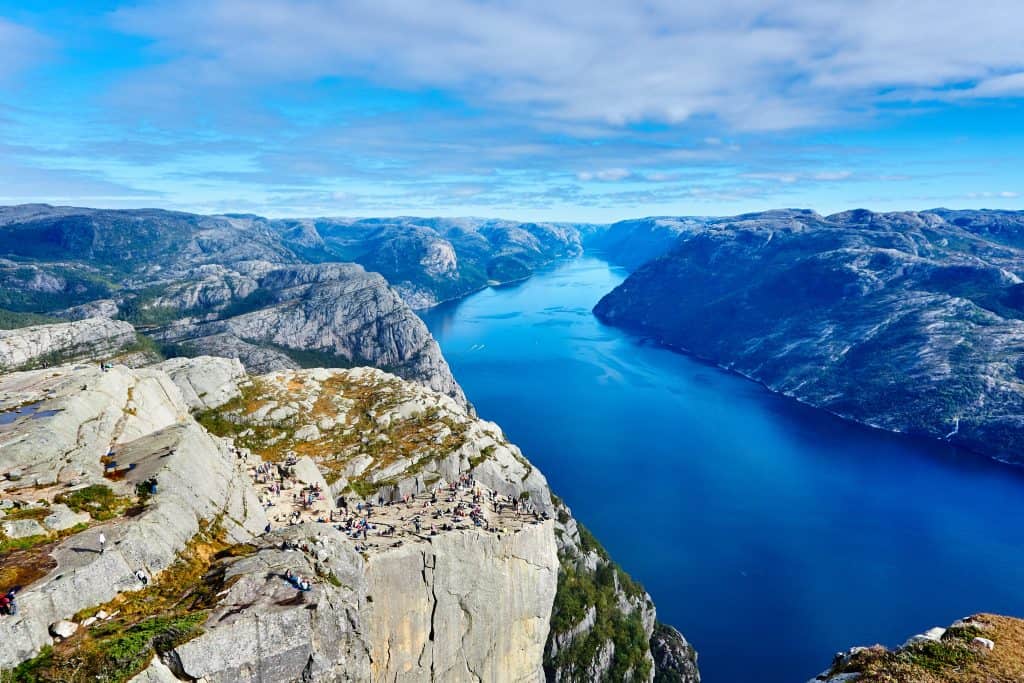 *Photo at the very top is of the American hiker friend Jen Cowel’s daughter on the top of Pulpit Rock.

I am free, but not lost, as I stand here and admire God’s creation. – Cacinda Maloney

Things to do in Oslo, Norway:

Disclosure:  The writer believes in full disclosure and wanted to let you know that this trip was provided by Visit Norway USA.  As is common in the travel industry, the writer was provided with accommodations, meals, and other compensation

Cacinda!! This is beautifully written and you are definitely not helping my case with my husband that we can ''do'' Norway another time (not on this upcoming Europe trip). Places exactly like Preikestolen is why he wants us to go asap ;)

Also, I can totally relate to your reaction to people climbing with huge backpacks and carrying children! Recently we were coming down a 5-mile climb from a mountain pass and we encountered a young couple and the woman was carrying a 3-year-old on her back! I stopped and told her she was a rockstar and I was so impressed with her! Clearly, I had no room for struggling after seeing her strength!!

Norway is a special place and one not to be missed! It is amazing what people can do on a hike, as I was struggling much of the way, but then one 50 year old pointed out to me that a majority of the people climbing that day were clearly younger than 30! I am just a late bloomer! Good luck on making it there, you just have to put it on your bucket list and then do it. One journey at a time.

Very nicely done. That last picture is my favorite. Thank you for sharing the experience.

Thanks for your kind words Kerwin! Travel is always a labor of love for me!

What a fantastic journey my friend!! I loved your writing and your gorgeous photographs taken along every step of the trek to the top of the fjord!! It must have been exhilarating to stand on the edge of the world, so to speak. Norway will be proud!!

Thank you my friend, it was exhilarating and oh, so beautiful! I love #Norway!!

Being cold and wet on a hike is the worst! But it looks beautiful and worth it.

It was the day the Lord gave me, so I will take it! Not perfect, but amazing nonetheless!