Home » Destinations » Xcaret, Mexico: The Adventure Park You Will Enjoy the Most!

It is hard to explain, but basically, Xcaret Mexico is an eco-friendly park in the Yucatan area of Quintana Roo, Mexico. This is one of my favorite excursions that Riviera Maya has to offer. My family and I had more fun there than we ever dreamed, as we really had no idea what it was, but kept hearing from tourists and locals alike that we shouldn’t miss Xcaret Mexico Park. And I agree, it makes for a fun family day experience from Cancun or anywhere along the Riviera Maya. 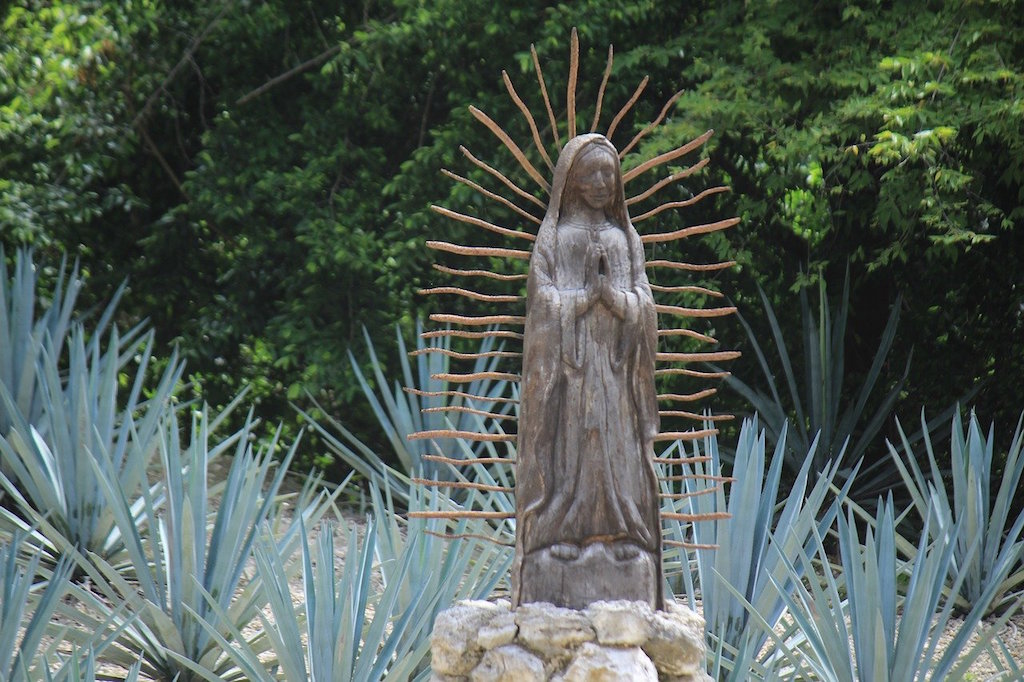 What's in this post: hide
1 Xcaret Mexico Espectacular!
1.1 Xcaret Park Mexico: What is it?
1.2 Xcaret Park Mexico Truly is Espectacular!
1.3 Buy Xcaret Tickets in Advance
1.4 How much does Xcaret Park cost?
1.5 Add Food and Experiences to Your Ticket
1.6 The Underground River Float
1.7 How the Underground River works
1.8 Three Mayan Rivers
1.9 The History of Mexico Show
1.10 Tips about Xcaret Food and Drinks
1.11 Tips about Planning your Day
1.12 Does Xcaret Mexico have a beach?
1.13 How many Xcaret parks are there?
1.14 Save Money! Are you a Member of HSBC?

Xcaret Park Mexico: What is it? 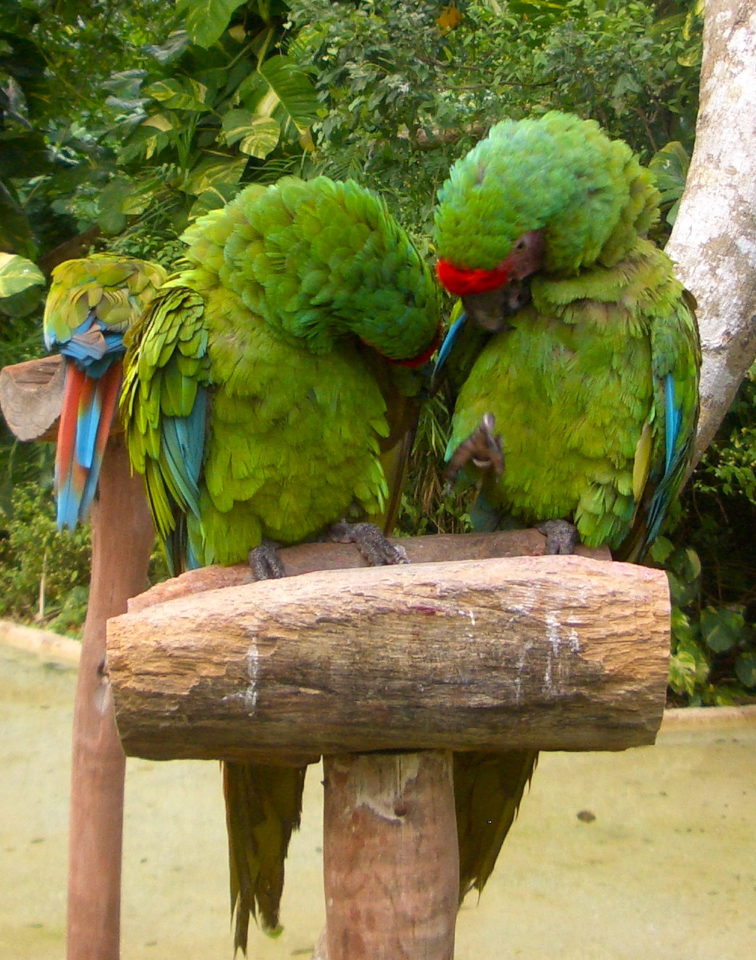 Xcaret Park Mexico is sort of like a cross between California’s Disneyland and the San Diego Zoo, but better mostly because it has a floating cave system, an animal and butterfly sanctuary, an authentic Mexican cemetery, and a History of Mexico Show that will blow your socks off! You can discover the dances and music surrounding Xcaret Mexic, literally at sunset. The design of the park really is unique, as it combines the exotic flora and fauna of the Yucatan Peninsula with the deeply-rooted traditions from different states in Mexico. We had more fun than you could shake a stick at this Xcaret Park! 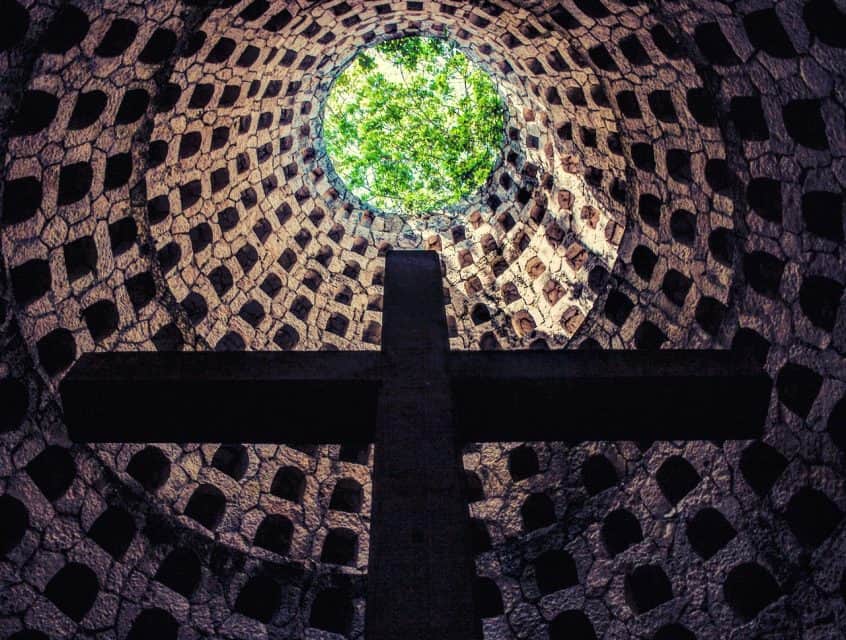 The Xcaret Mexico folkloric ballet danced the traditional dances from around Mexico, including “Flor de Pina” (Pineapple Flower) from Oaxaca, and the “Dance of the Old Men”, from Michoacan. The choreography is quite spectacular and also includes songs typically from the north of Mexico. Plus, who doesn’t want to hear the sounds of the iconic Mariachis? These guys are adored by everyone who hears them play and no matter where you go, there is always a request for a song.

Xcaret Mexico park also has macaws from the Wildlife Refuge and Breeding Farm, which shelters over 24 species of Mexican birds, many of which are in danger of extinction due to deforestation. They have over 50 exhibits like Jaguar Island, Spider Monkey Island, and Manatee Lagoon. In fact, there are so many exhibits and things to do that it is hard to decide what to do first!

Honestly, there are too many things to do at Xcaret Mexico in a single day. So to help you make the most of your visit, I am going to share my top Xcaret Mexico tips with you.

I think that Xcaret Mexico is hands-down the best theme park in Mexico. But if you want to save money and not have to stand in line, I would suggest that you buy the tickets online BEFORE you get there. Believe me, you will get value out of the ticket that you purchased.

How much does Xcaret Park cost?

There are two types of Xcaret Park tickets:

Add Food and Experiences to Your Ticket

Xcaret Park has two additional ticket options which can add extra value to your visit:

So if you want to get even more value, you can choose one of the above-priced tickets at Xcaret Mexico. Plus, visiting Xcaret is one of the most fun things to do in Mexico. 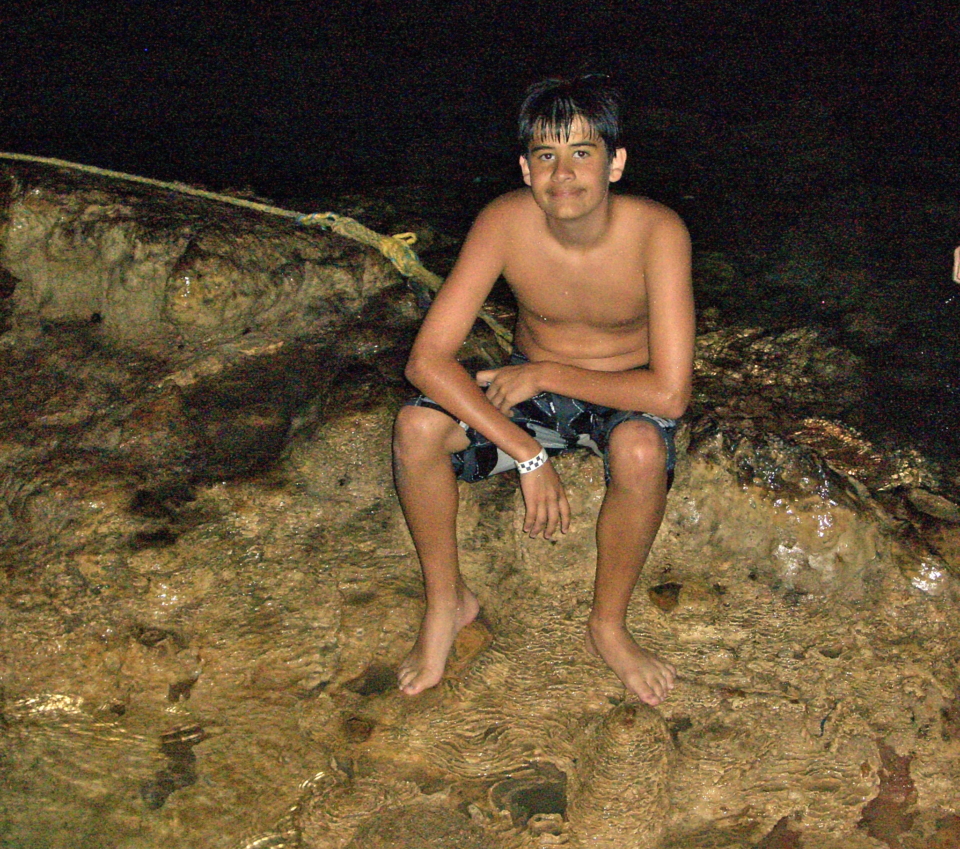 For us, we decided to take the underground river inside the Xcaret Mexico first. Be sure and come prepared with your bathing suit underneath your clothes (although they do have nice changing facilities). You can get changed in the shower room near the main entrance to the Xcaret Mexico park. Then make your way to the entrance to the underground river.

How the Underground River works

Starting at the take-off station, they have these huge duffel bags they give you to store your things in that you don’t want to float down the cave river with. The Xcaret Mexico staff person issues you a lifejacket, an inner tube, and a headlamp. You give the staff your duffel bag back to them filled with your things. Xcaret Mexico staff zips up and locks your duffel bag, and then gives you the key. They will have it for you when you are at the end of the river float. They give you your bag and you have the key to unlock it!

As for towels at Xcaret Mexico, if you bought a standard ticket you will need to bring your own towel or rent one for a small fee, which is what my family did. Towels are included in the Xcaret Plus package, though, so that is a huge plus.

Honestly, they have everything figure out and it is a great system. This helps make your life easier and helps you enjoy a relaxing adventure with your family. It is even fun for couples or groups of friends, as well, as you float downstream. 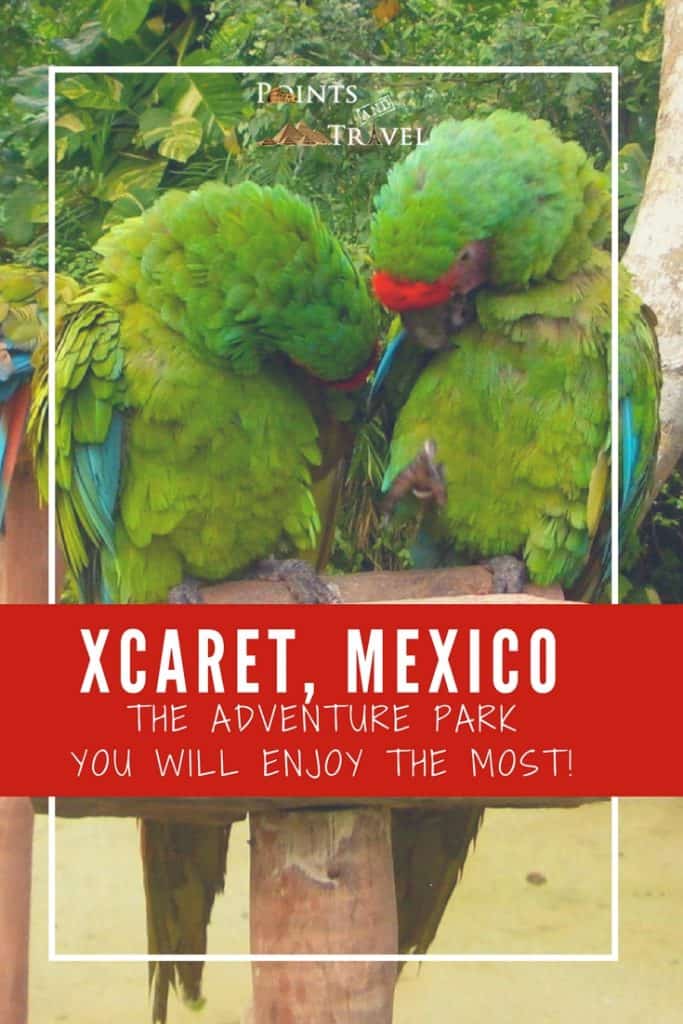 There are three rivers to choose from at Xcaret Mexico and they are only about 5 feet deep. We chose the Mayan River, as it was the one with some cave and some open-air floating options.  Alternatively, if you don’t want to get completely wet, there is one that had a river raft that you could float down if you want that option. Xcaret Mexico made us sign a special waiver in order to bring our toddlers into the underground river as some small children find the water too cold. FYI

The whole ride took us almost 45 minutes to an hour, with all the stops and goofing around that we did. Oh, and by the way, we even brought along our adventurous grandmother, so it is not too strenuous. And believe me, she had fun! She loves hanging out with us and the kiddos. 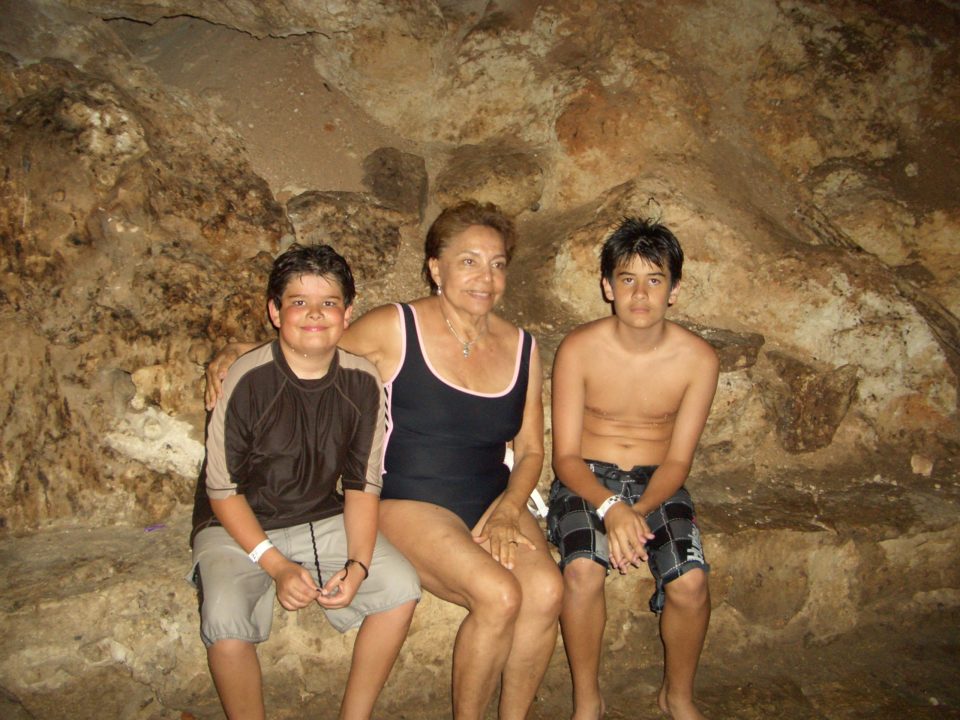 The History of Mexico Show

After our river float was over, we dried off and quickly changed into our nice clothes for our 6 pm show called Mexico Espectacular! And spectacular this show was at Xcaret Mexico! We had seats right up front as the waiters took our food orders. The view could not have been any better.  We were in an arena-type setting where the show takes you on a musical journey through the history of Mexico. It is honestly one of the best shows about the History of Mexico that I have ever seen! 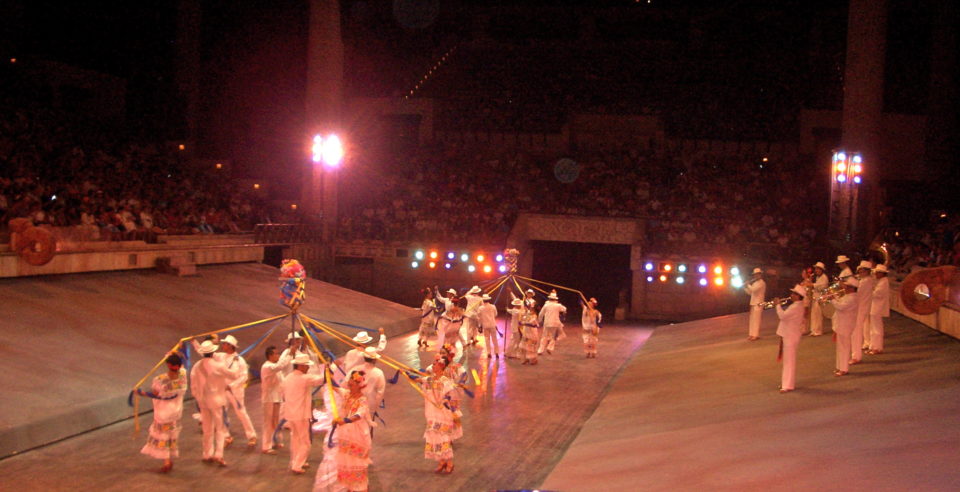 The 300 plus actors started with the Mayans and progressed to the Spanish conquest and then ended with Mexican heroes and Mexican songs that are popular with the crowd. 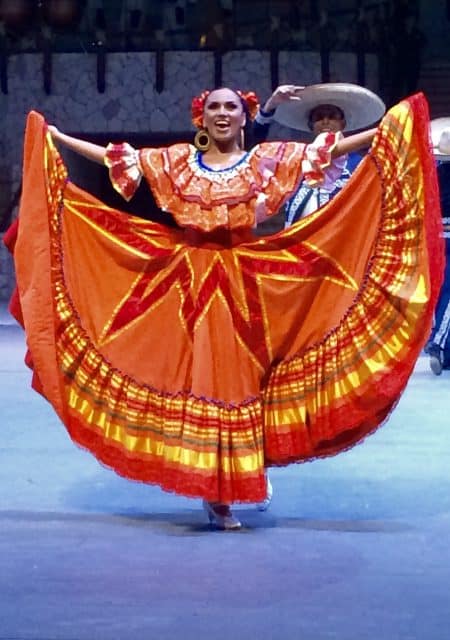 We especially enjoyed the Mayan Ball Game, which was a live performance of warriors from heaven and hell, as well as the magnificent display of the women’s Mexican dress from the different Mexican states and the indigenous women of Mexico. 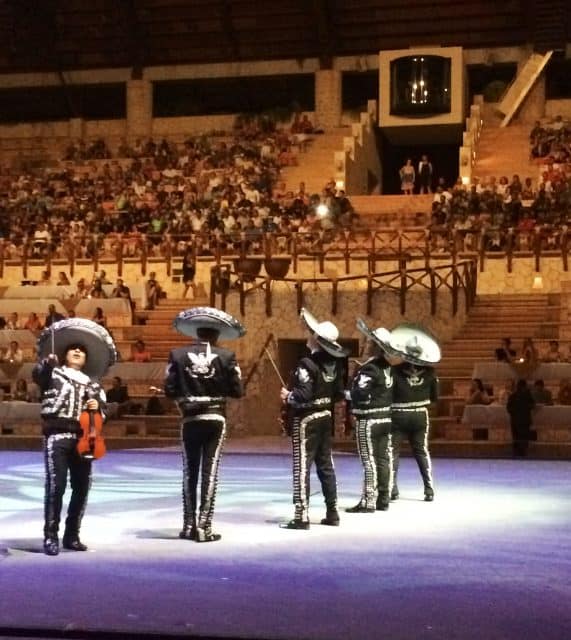 There was so much more to do at the Xcaret Mexico, but the spectacular day came to an end late into the night. And we still had to drive back to Cancun that evening. We thoroughly enjoyed Xcaret (pronounced SHH! CAR ET) and would return in a heartbeat the next time we are in the Yucatan area of Mexico. This is one of many amazing excursions Riviera Maya has to offer, so be sure and go! 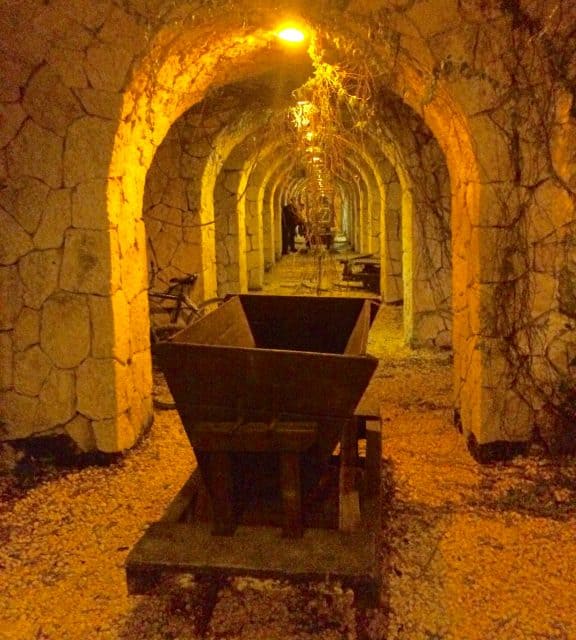 Tips about Xcaret Food and Drinks

All outside food and beverages are not allowed within Xcaret Mexico Park. The only exception is parents with a baby can bring baby food into the park.

Most people come to Xcaret Mexico Park and spend a full day there. They typically eat a meal during their visit. If you plan on eating a meal at Xcaret, the Xcaret Plus package will likely save you a bit of money.

Tips about Planning your Day

I recommend getting familiar with the list of Xcaret activities and then prioritize your day according to you and your family’s (or friend’s) interests. We had a grandmother and two kids in two, so we chose accordingly.

Does Xcaret Mexico have a beach?

Xcaret Mexico has a white sandy beach near the inlet to the Caribbean Sea. You can take a dip in the calm water of the well-protected waters of the Xcaret beach.

How many Xcaret parks are there?

Save Money! Are you a Member of HSBC?

If you have a credit card from HSBC, then Xcaret Mexico offers a great deal for HSBC credit cardholders. So use your HSBC credit card to buy your Standard Xcaret or Xcaret Plus admission tickets, and you will get a second day for free. How cool is that?

Here are a few other articles I have written about Mexico:

A guide to Drinks in Mexico

What animals are at the park? Are they actually jaguars? Also, what is the price of the gate tickets?

According to the website, "At Xcaret, you will be able to marvel at jaguars and pumas, which live on two large islands shaded by leafy trees and surrounded by wide channels of water. These stunning felines will captivate your attention." Apparently they live on the island itself, Jaguar Island. Cost for Xcaret is $80, but check here for all the different things that they offer: https://www.xcaret.com/xcaret-basic-admission-xcaret-ticket