The tour I took in Barcelona was called:  Farm to Fork, La Boqueria Barcelona, and Beyond. It began at the intersection of Carrer de la Boqueria and La Rambla, which was founded in the 12th century, making it one of Europe’s oldest markets. 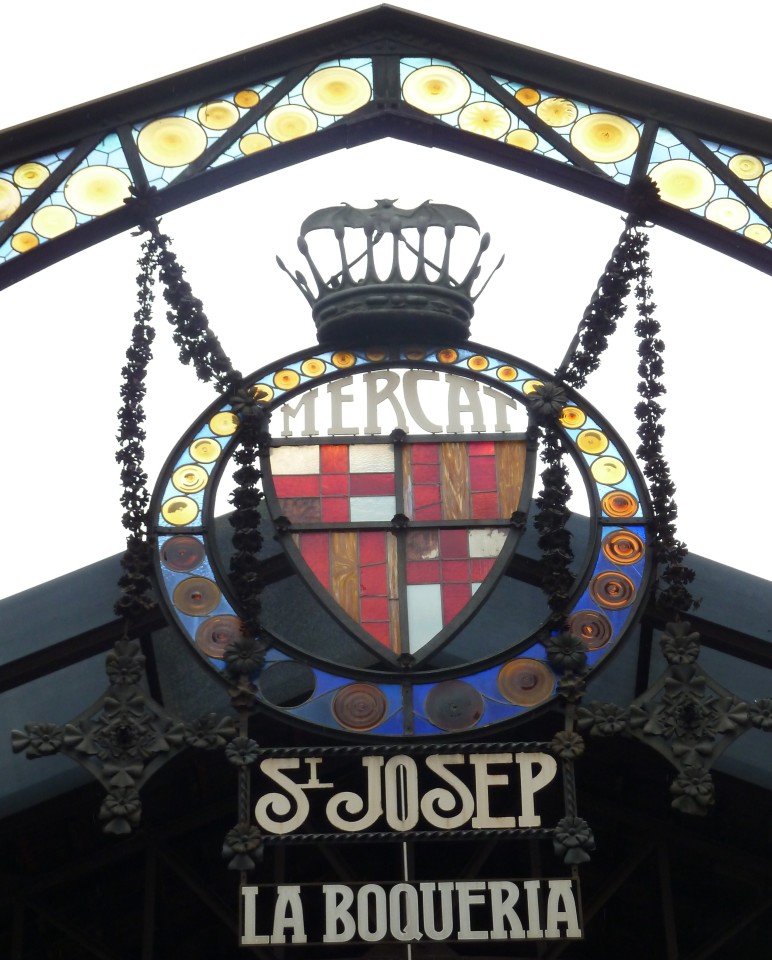 If you haven’t heard of La Boqueria Barcelona, let me introduce you to 795 years of Barcelona food: La Boqueria Barcelona Food Market. It started out as a meat market in 1217 and then in 1470 became a pig market, from there it became a straw market in 1794. The years keep rolling by as it expands into what it is today, a fabulously wonderful, eye-delightful, tummy-loving place to wander in Barcelona.

This vibrant food market network attracts Michelin-starred chefs and local grandmothers alike. It is the epicenter of Catalan gastronomy. This Barcelona food market offers an unparalleled opportunity to experience the sights, smells, and tastes that Barcelona is famous for. 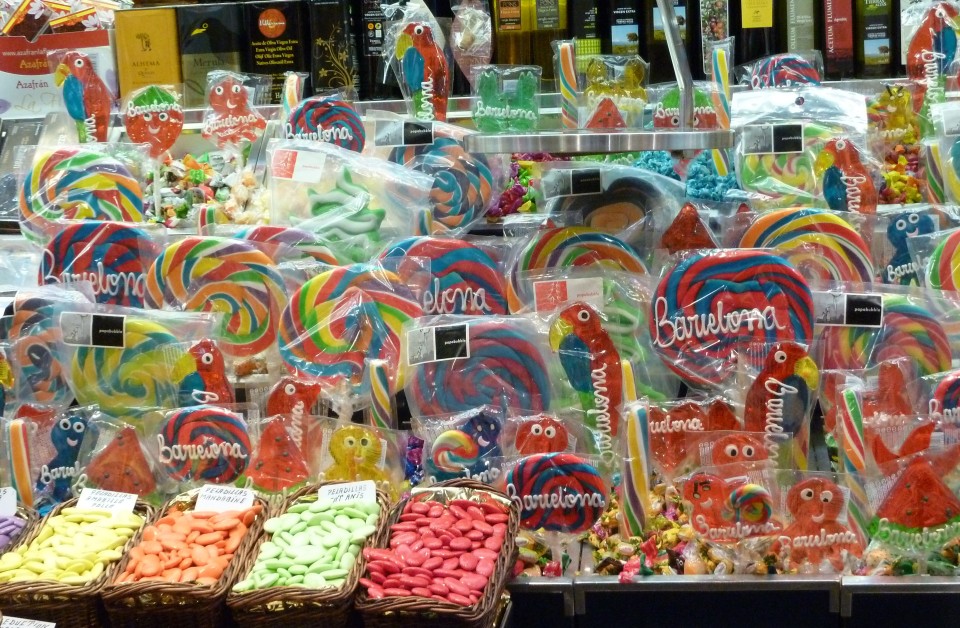 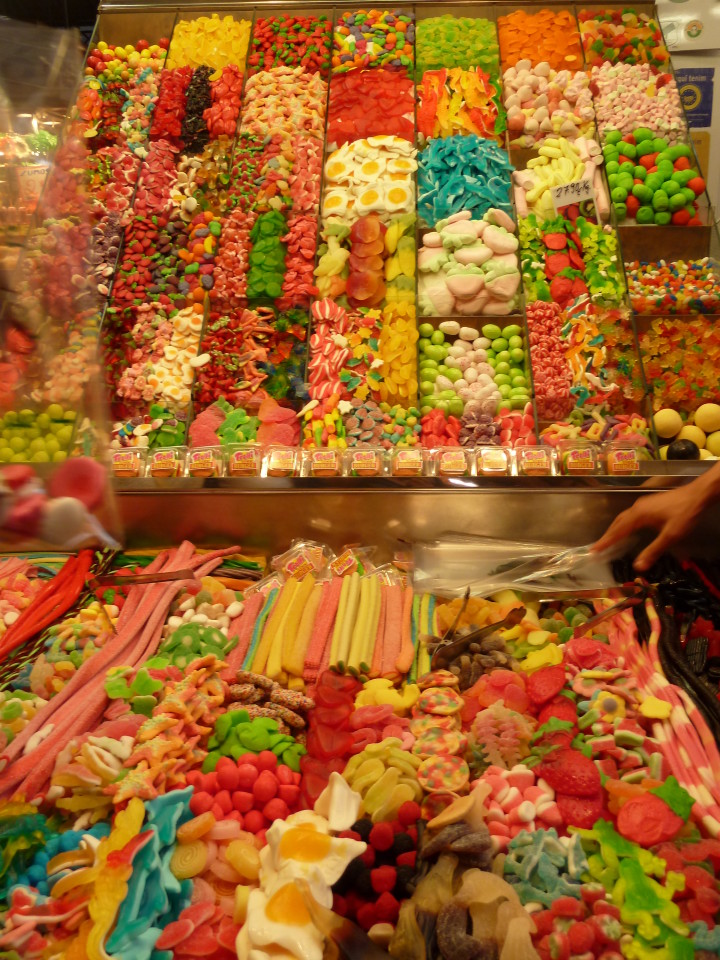 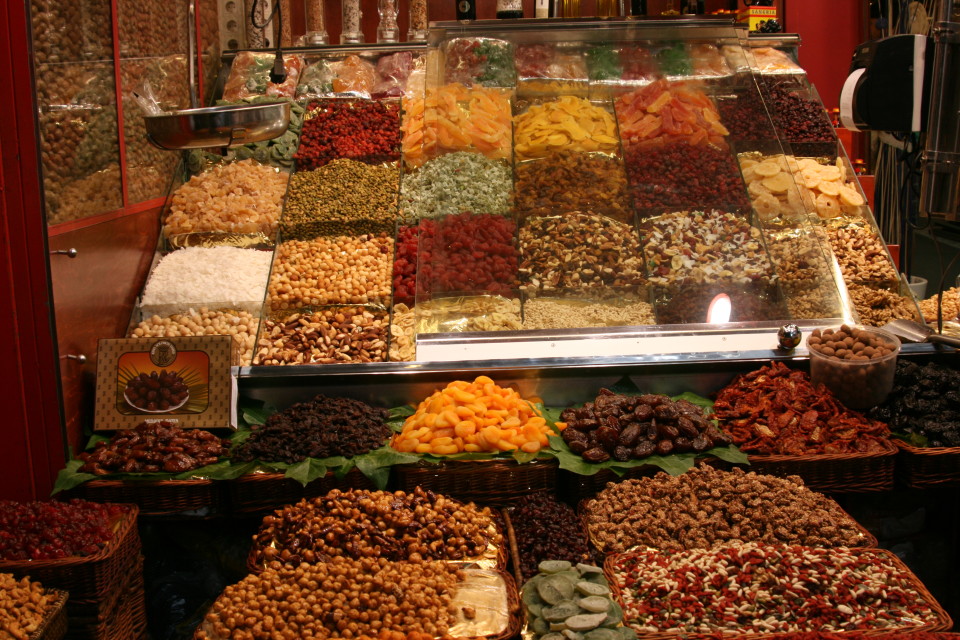 The main entrance is off the strolling area of Ramblas Barcelona, so there is no way you will miss seeing this famous icon.

Then off to La Granja M. Viader on Xucia Street, one of the oldest milk shops in Barcelona, a deeply rooted Catalonian institution. It has been there since 1870, and today it is basically like a coffee shop/cafe, or a local “dairy” that serves the afternoon merinda of chocolate.

A granjas today is a cafe that specializes in chocolate and sweets. The world granja means farm in Spanish, which makes sense since this is the oldest milk shop, so most likely the farmers brought their cow milk here to sell. 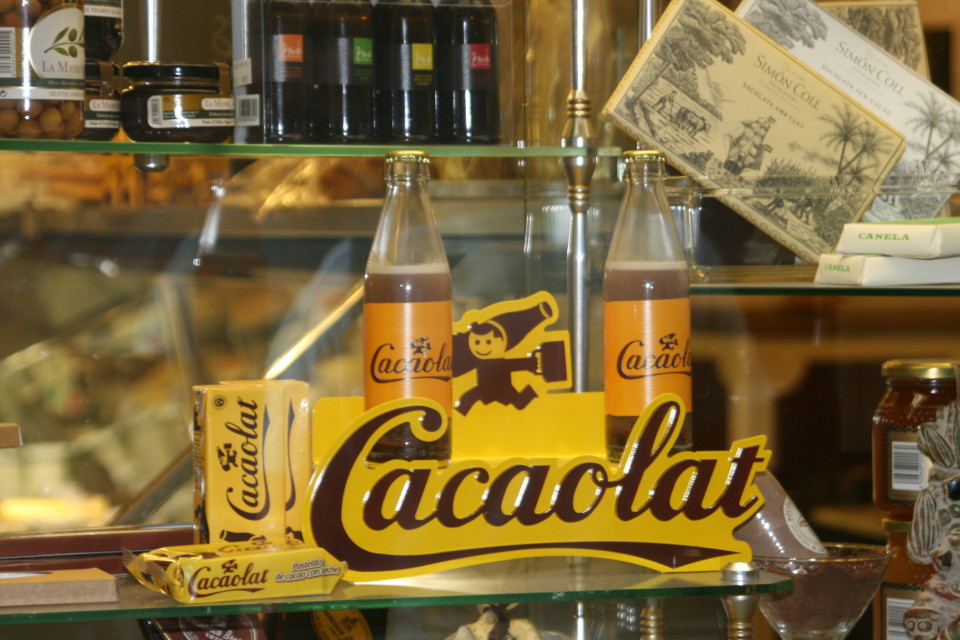 La Granja M. Viader is well known for serving Cacaolat, which is like a milkshake in a bottle. It sort of tastes like a cross between a chocolate milkshake and chocolate milk and comes in a bottle like the old Yoo-Hoo drinks (remember those?!).  Spain was actually the first place that chocolate arrived in the Old World when Columbus brought back unprocessed cacao beans with him into the port of Barcelona, thus the emphasis on chocolate here.  There is even a chocolate museum in Barcelona!

Here’s a photo of the inside counter of La Granja M Viader, where they also serve a huge array of cheeses and serrano hams for lunch.  They have a great website if you get a chance to check them out: 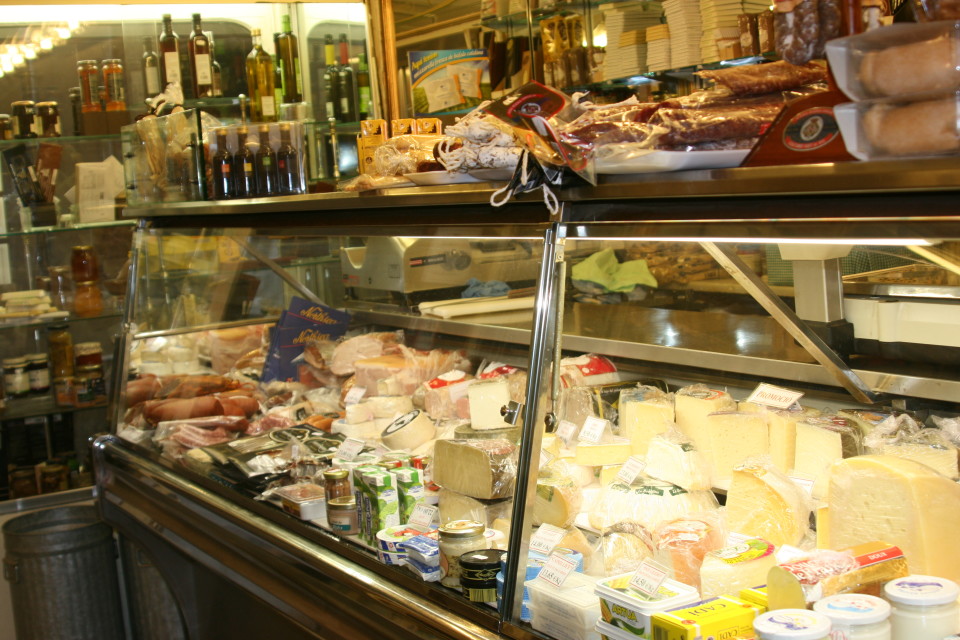 The food expert and walking guide I was with told us that we would start the tour off with sweets and goes to salt, and so we did, which is an excellent idea for you to do.

Here was our first tasting (SWEET): 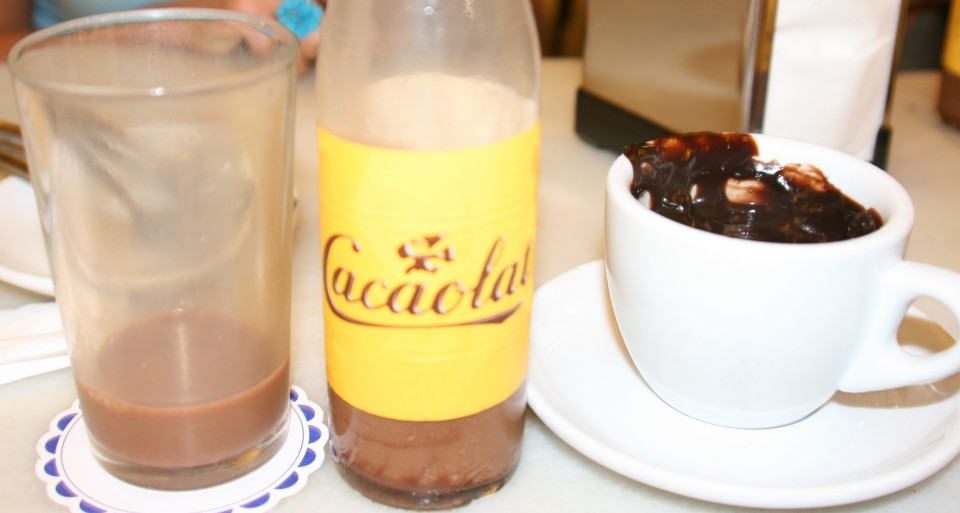 The white ceramic coffee mug might look like coffee, but it is, in fact, some sort of hot dark chocolate drippy goodness, that we dipped our sweet bread sprinkled with sugar into and drank our milkshake Cacaolat!  That was some sweet goodness for sure!  I cannot emphasize enough that you should not miss all these delicious chocolatey treats.  This is a favorite late-night snack in the wee hours of the morning among young Spaniards.

Then we were off down the streets of beautiful  Ramblas Barcelona, on to our next food tasting place. 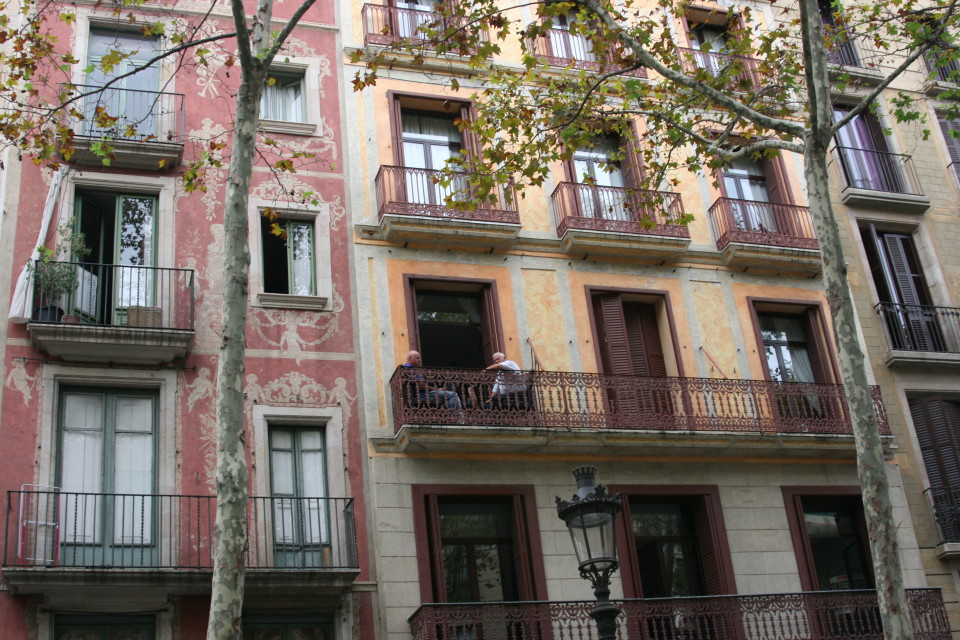 Take A Gander At Restaurant Can Culleretes

Along our walk, although we didn’t stop, the foodie expert did point out a classic restaurant that has been in the area for years called Restaurant Can Culleretes, in the neighborhood since 1786! 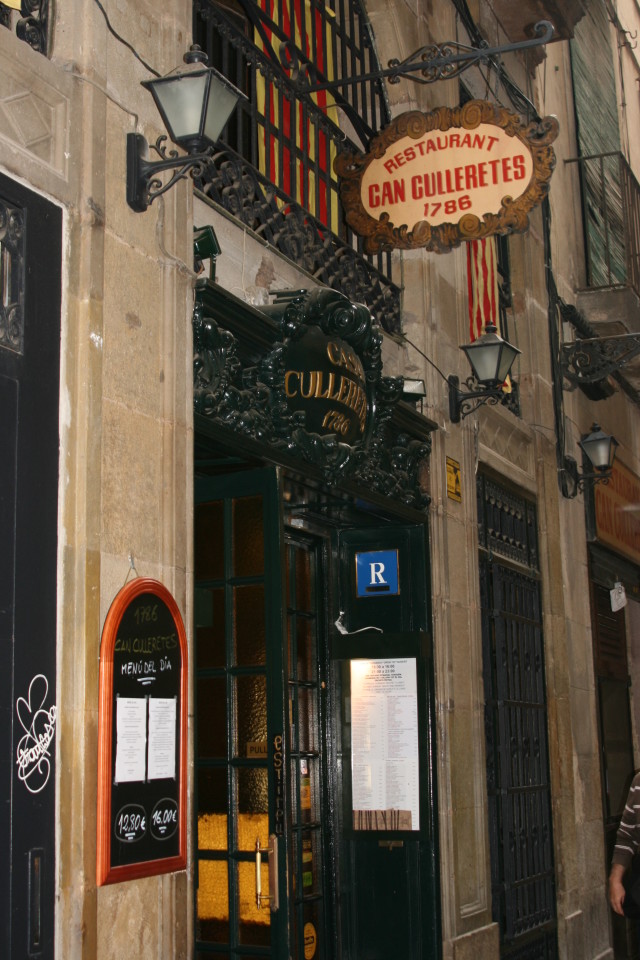 They were filming a documentary about the restaurant the day we walked by.  Our food expert recommended it as a place to have dinner in Barcelona, so put this on your list for great Barcelona Food!

Each classic Barcelona food establishment has these cast iron bronze metal plaques embedded in the cobblestone-like pavement in front of their store from the city of Barcelona that signifies that they are a historic Barcelona food shop, so look out for these when in Barcelona, as recommended places to eat. Most of them have been around a few hundred years! 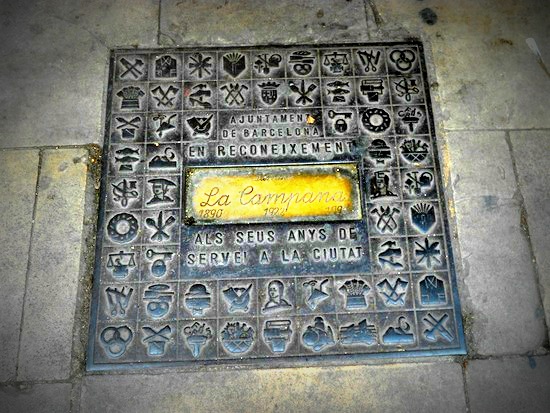 Next, we entered a different side entrance of La Boqueria to taste the briny, wet stand area, stopping to examine olives.  Yes, olives.  And no, we are not in Italy, this is Spain! There are so many varieties of olives in Spain. We tasted at least 5 different varieties with different textures, sizes, and tastes. Delicious! This would start the salt portion of the tour. 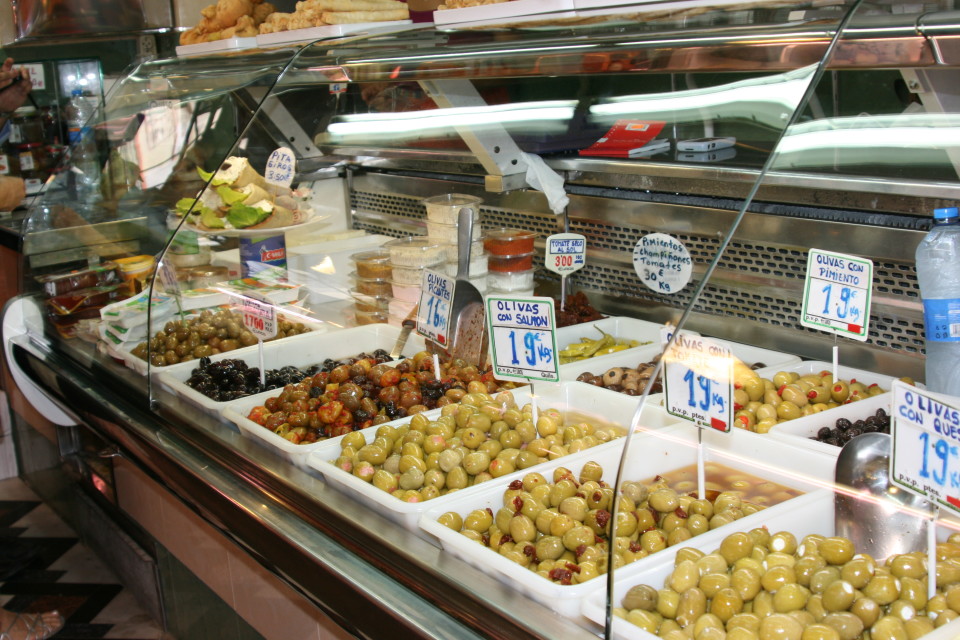 We wandered our way through the fruit and vegetable stands until we made it to the freshly hunted mushrooms. 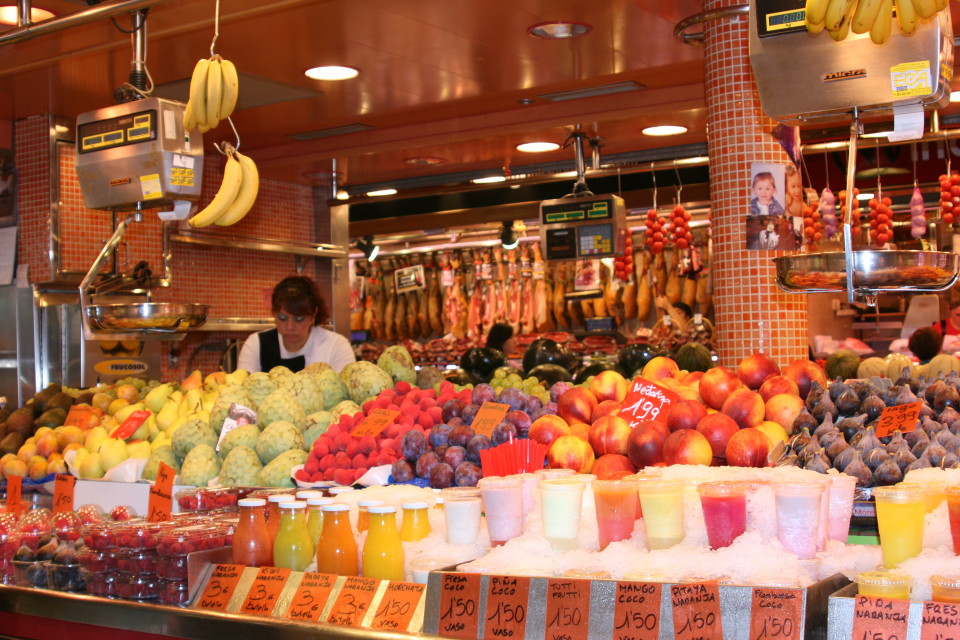 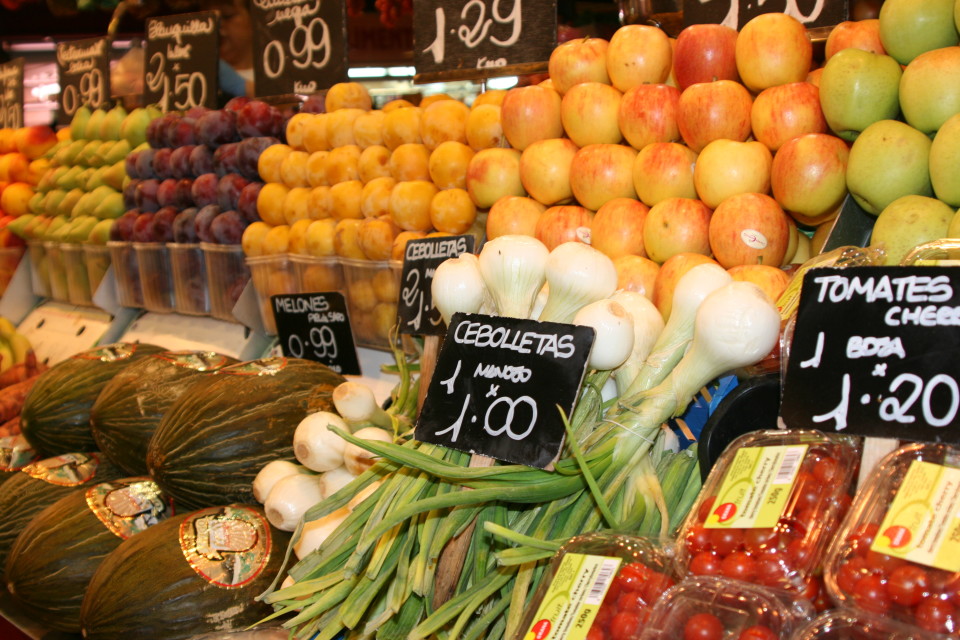 Here we stopped to examine freshly-hunted mushrooms. There’s a long tradition of gathering mushrooms in this part of Catalonia. It’s one of the tastiest foods found naturally in the Pyrenees mountains and the locals take their families on these hunts. In the old times, it was a very important economic contribution to the family. Our expert Esther reminiscences about her childhood family trips hunting mushrooms. 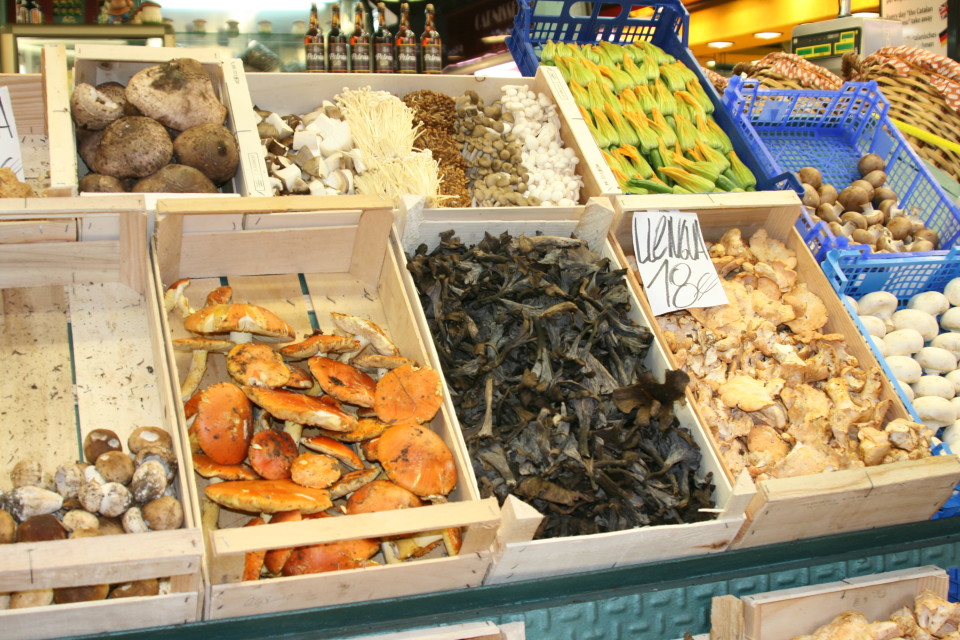 Then it was off to the fish market, where she told us about the  Bacalao (cod) fish, a type of fish that is cooked and dried by salt.  The buyer soaks it in water over a period of days to pull out the salt and can keep it up to a week in their home for lunch or dinner. 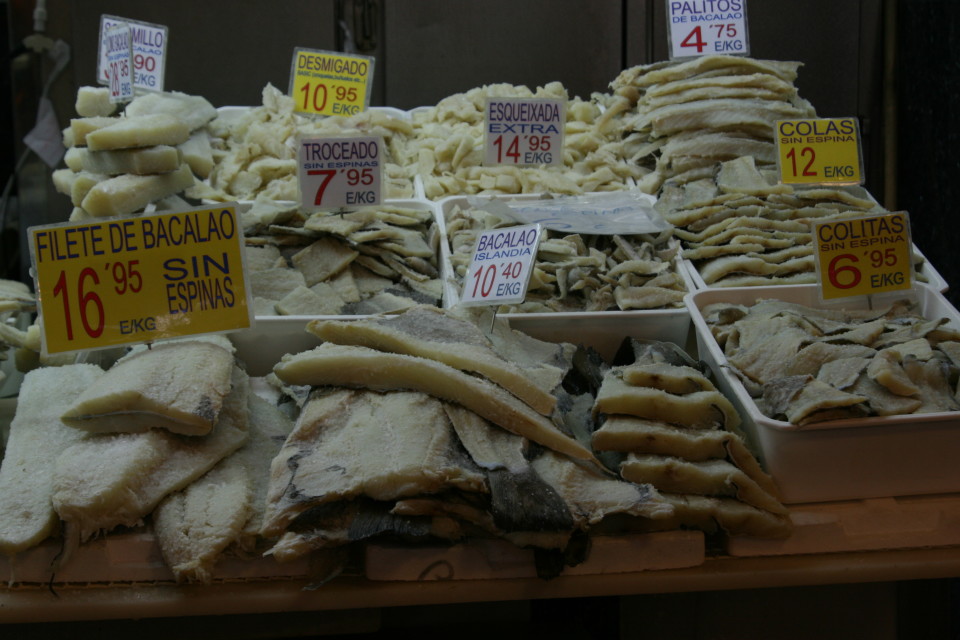 A photo of my new travel friends: Kiersten of The Blonde Abroad and Susan of Get Naked Yoga having oysters, that according to them, are so cheap that they just had to try them (they are from California, so they know a great seafood deal when they see it). 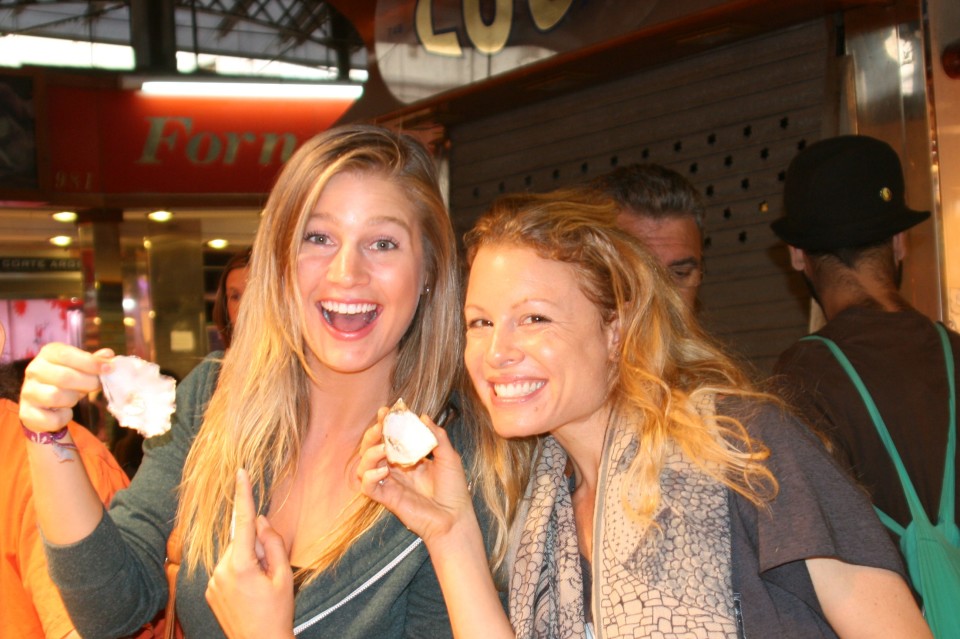 Next, it was on to the bread and HAM!!  (more salt). Yes, according to me, all the dried hams of Spain are amazing! Salty Jamon is one of my favorite things and I could live on prosciutto and crusty bread on a daily basis for breakfast, lunch, and/or dinner. 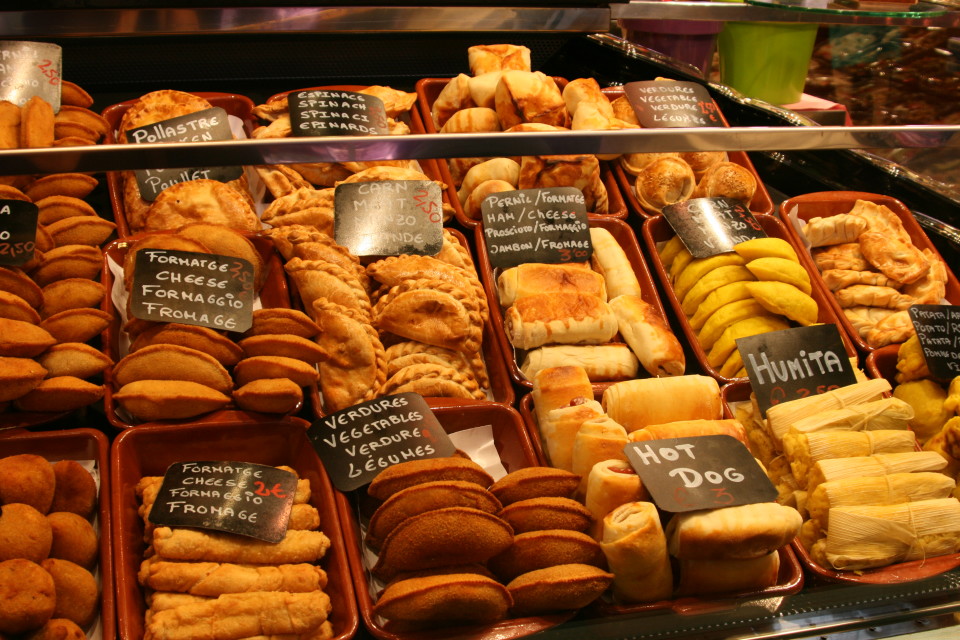 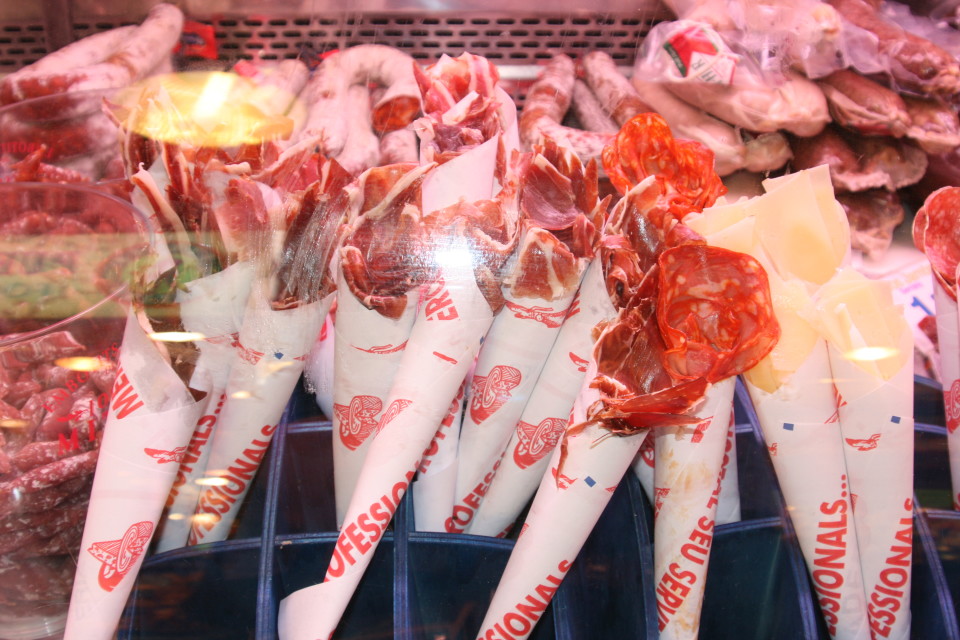 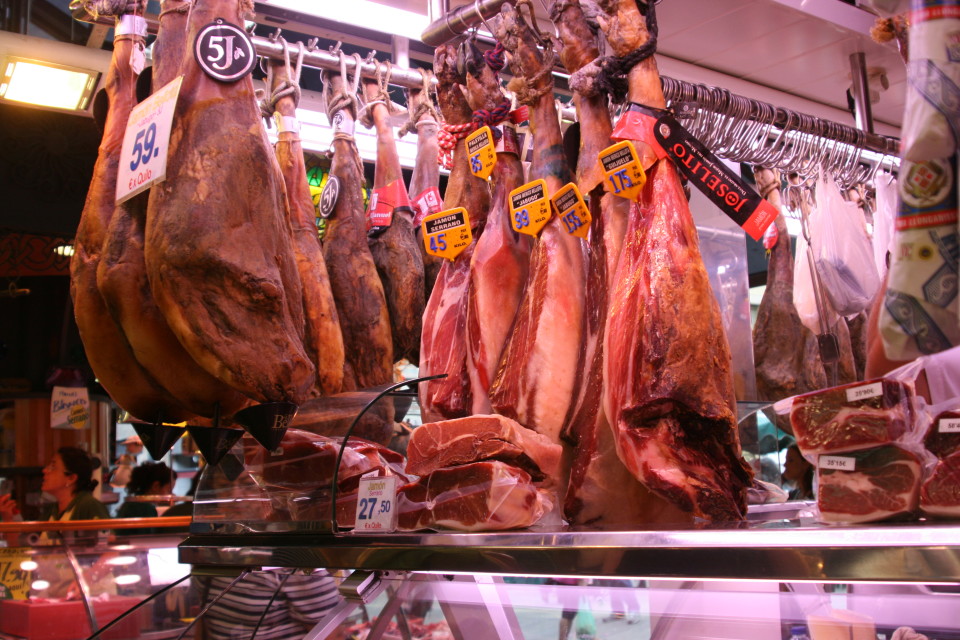 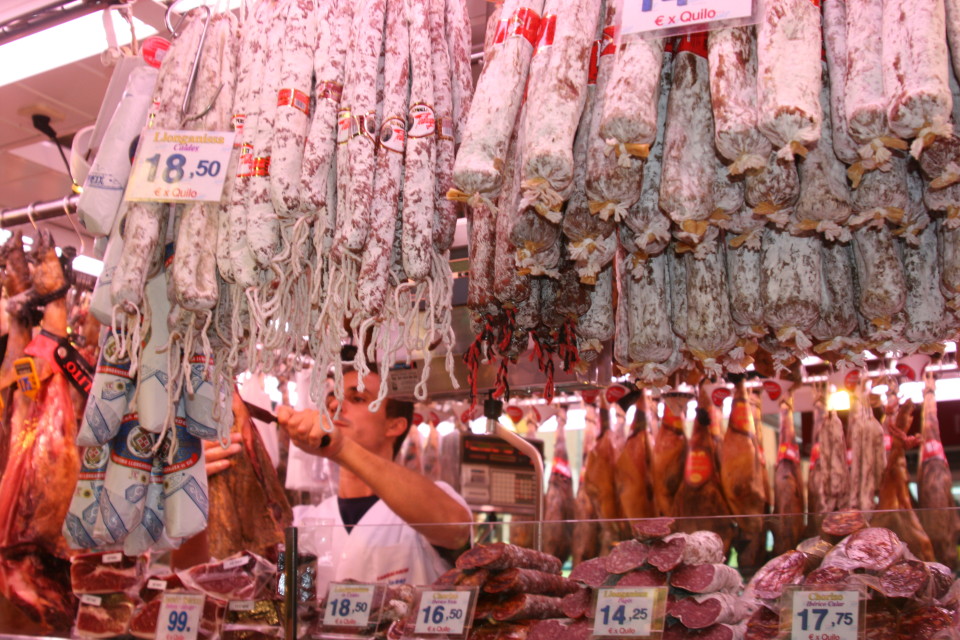 Take A Tour of Boqueria Barcelona: Sweet and Salty

The tour I took in Barcelona was called:  Farm to Fork, La Boqueria Barcelona, and Beyond. Our host truly was an expert in food and took us on an adventure along the way that I don’t think I ever would have ever seen or tasted, had I toured the city on my own. I wasn’t expecting such a fabulous tour and this tour has changed my mind about walking tours of cities.

What a fabulous day I had on my walking foodie tour with Context Travel at La Boqueria Barcelona!  They have a great tag line — Walking tours for the intellectually curious!  That is me! Context Travel Tours are in 21 cities— in Barcelona and in 15 other European cities, 4 US cities, and 2 Asian cities and use expert-level docents to lead the tours! They offer plenty of other tours you can choose from — on chocolate, art, architecture, history, and even tours geared towards kids. I can’t recommend them enough.  They are the “untour”  tour company with not more than 6 people in your group, so you can get to know the others, the expert and ask lots of questions. This is my kind of tour.!  Our food tour was led by Esther, a native Catalana with perfect English, who was truly an expert in food history.

What I enjoyed the most: Tracing the history of food and getting an overview of regional Catalan gastronomy (oh, and the tastings of course!).

Check them out:  Context Travel

Disclaimer:  My visit to the Farm to Fork, La Boqueria tour was sponsored by Context Travel. The opinions noted here are entirely my own.

When you are ready to plan your trip, see Spain and Portugal Itinerary for 10 days,

Other articles were written about Barcelona or nearby:

A Day Trip from Barcelona:  Colonia Guell and Gaudi’s Crypt

Post #3: So, you want to go to Spain’s Brave Coast: Seaside LEstartit

Post #4: Medieval villages along the Costa Brava of Spain -Begur

Post #5: Where to stay in Begur:  Hotel Aigua Blava

Post #7: The Apples in Spain Fall Mainly on the Plain

Seville, Spain: Top 15 Things to Do

oops! I think I left out the famous Tapas bar we went into while we were there.

La boqueria is one of my favourite European food markets (tied with London's Borough market!) I loved the fruit smoothies, and tapas stands the most! Mmmmmm I must go back soon.

Me too! I loved La boqueria! Heck, I loved Barcelona! I went in September and had amazing weather.

Such a YUMMY day!!! Great recount of our food filled adventure in Barcelona!

Finally got around to writing it up! We did have a great time!

Everything looks fantastic! I'm planning on doing this walk in a couple of weeks with my parents. I can't wait!

It was amazing and you will love it!